UPDATED 3/12/19: Over the weekend, we launched The World’s Greatest Super Friends Podcast with John S. Drew. We’re covering every episode of the beloved series — for good or bad. (Check it out here. I think you’ll enjoy it.) In any event, it got me to thinking about Filmation’s superior Justice League of America shorts and this piece that first ran in 2017. Dig it. — Dan

I’ll let you in on a little secret: I don’t really love Super Friends.

It’s not like I actively dislike it or anything and I know it sounds heretical to anyone who, like me, grew up in the ’70s. Though I dug the whole Legion of Doom schtick, Super Friends was a staple mostly because it was often the only superhero game in town on Saturday mornings. 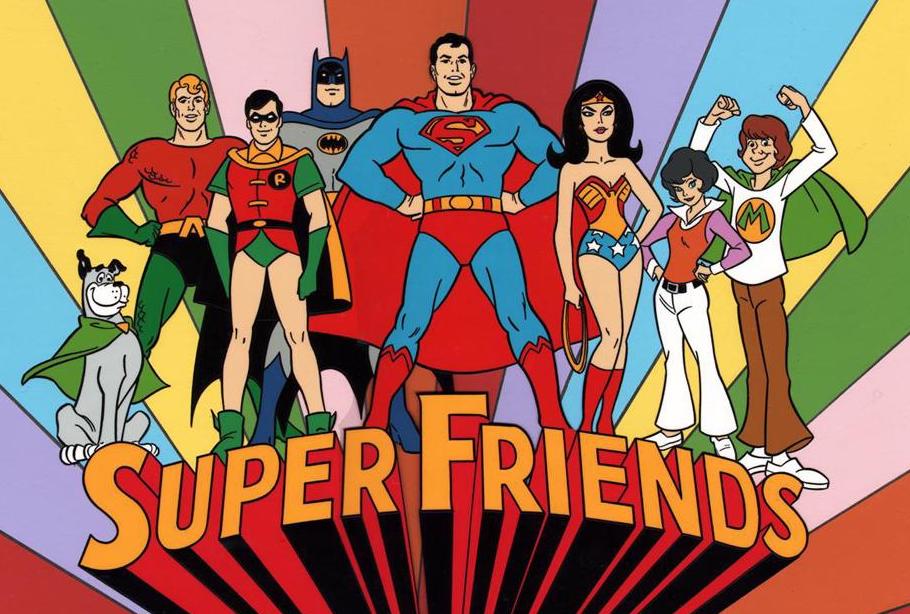 Filmation? That’s another thing entirely. I love Filmation’s DC Comics cartoons from the ’60s, which I discovered through the magic of syndication.

Part of it is because Filmation’s cartoons are unapologetically schlocky in a way that Super Friends isn’t. Super Friends, with its contrived teenage interlopers, derivative animal sidekicks and “Health” segments, feels more annoyingly earnest. Even the name “Super Friends” is condescending.

Filmation had no such pretentions: They’re adventure cartoons starring my favorite superheroes, done on the cheap, cheesy in the best possible way. 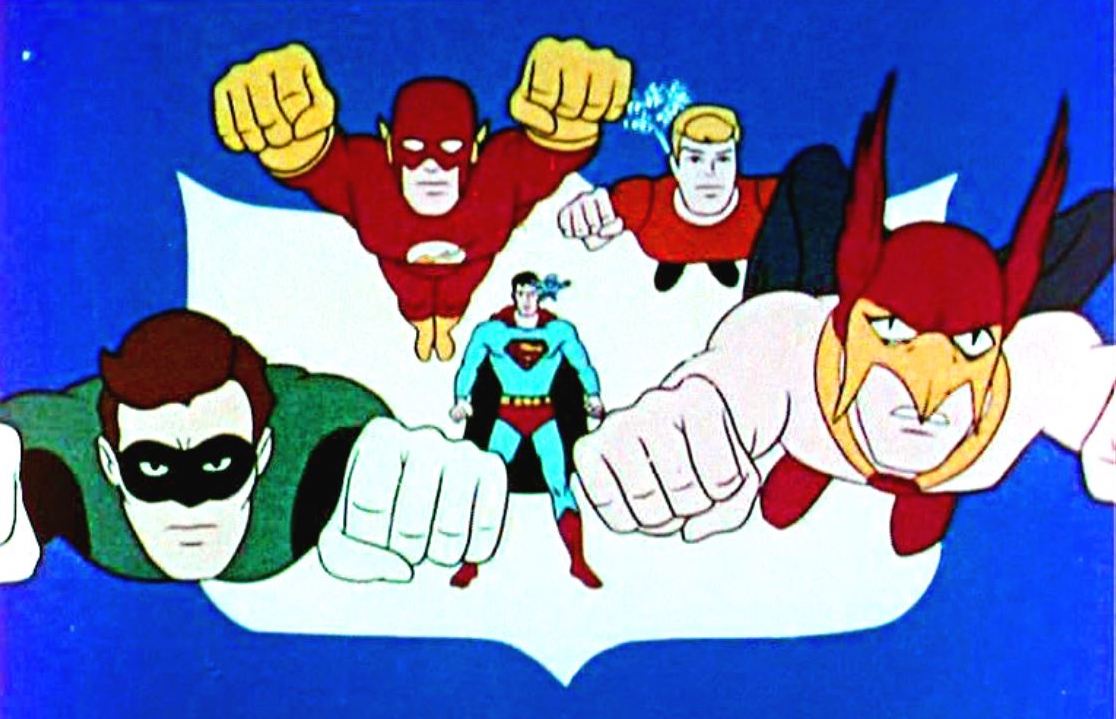 Why am I mentioning all this now? Simple: The big-screen Justice League is out next week (11/17, officially) and I can’t help but think back to the first time the League banded together on screen — in three shorts produced in 1967 as part of the Superman-Aquaman Hour of Adventure.

Quick bit of background for the uninitiated: Filmation struck it big with its Saturday morning The New Adventures of Superman cartoon in 1966 — a good year for TV superheroes — on CBS. The next year, they expanded with Aquaman cartoons, which may be the best Filmation ever produced. But they also added a series of “guest-star” shorts featuring solo adventures of the Atom, Flash, Green Lantern and Hawkman, and two teams: the Teen Titans and the Justice League of America. Each got three shorts apiece.

I wasn’t really exposed to those shorts when I first watched Filmation’s DC cartoons in the early ’70s. But now, they’re a frequent source of background noise at 13th Dimension headquarters. They’re easy to get, either on disc or online. (Click here.)

As it happens, those JLA cartoons are the weakest of the bunch: Three nondescript adventures — Between Two Armies, Target Earth and Bad Day on Black Mountain — feature our heroes bravely battling an assortment of generic power-hungry aliens hellbent on world domination. Bad Day on Black Mountain has a neat sequence, though, where the alien menaces our heroes in their civilian guises, adding a bit more depth to the narrative. (SPOILER ALERT: Superman actually kills this guy in the end, which I guess should let Zack Snyder off the hook. Nah.) Summarily executed by the Man of Steel.

Anyway, there’s no Despero, Kanjar Ro or Felix Faust, y’know what I mean?

The JLA in this instance is pretty much the Filmation roster: Superman, the Atom, Flash, GL and Hawkman. Missing are Silver Age League stalwarts Aquaman, who strangely, is featured in the intro and was the co-headliner of the whole show; Wonder Woman and Martian Manhunter, who never made the Filmation cut; and Batman, who didn’t join the company’s line-up until after the 1966 live-action show ended. (Green Arrow’s not there either — even though Speedy’s in the Teen Titans shorts, while Robin was absent.)

So it’s a somewhat truncated team, but that’s cool. It was pretty typical in those days for JLA comics to feature subsets of the crew (hence the famed “Roll Call” features on the comics’ splash pages). Overall, however, the heroes are fairly interchangeable, other than their power sets and often off-model costumes: GL, Atom and Flash all add to the cartoons’ kitsch value with their humorously skewed designs.

Superman’s clearly the man in charge — Bud Collyer’s voice don’t take orders from no one — and the rest pretty much do their jobs with American Jet Age efficiency. Only the Atom, improbably voiced by character actor Pat Harrington, shows extra zip, calling his teammate “Flasheroo.” (I still can’t picture One Day at a Time’s Schneider as little Ray Palmer.) But it doesn’t really matter. These 5-minute shorts don’t pretend to be episodes of Justice League Unlimited, the high-water mark of all superhero animation.

They’re good old-fashioned bash-’em-ups that are as complicated as a backyard game of tag.

And I love them for it. 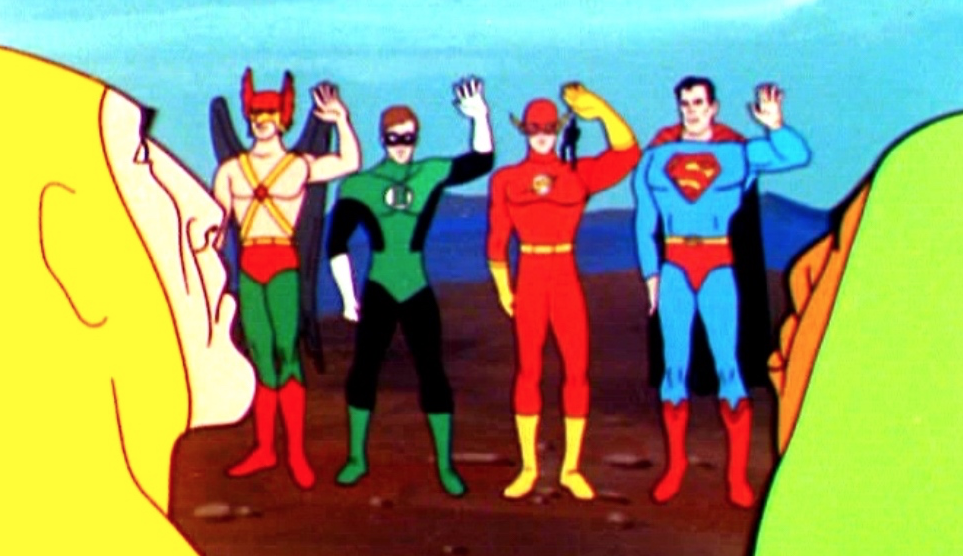