Batman’s 1968 Filmation run is one of my favorite iterations of the character. The cartoon isn’t particularly great but it is entertaining and, just as importantly, soaked in nostalgia. It also works as a quasi continuation of Batman ’66, without the adult-skewing camp. (That’s not to say the Filmation show wasn’t silly. It often was.)

Because of this connection, I’ve teamed up with John S. Drew on his Batcave Podcast for a special series of episodes exploring each of Filmation Batman’s 17 segments. The first one — which covers My Crime is Your Crime and A Bird Out of Hand — can be downloaded here, here or from iTunes.

These episodes will be uploaded on a regular basis, so join us for a listen, won’t you?

In the meantime, I’ve put together 13 QUICK THOUGHTS: The Kitschy Kick of Filmation Batman:

1. Filmation Batman — officially known as The Adventures of Batman — is the de facto fourth season of Batman ’66. It went into production just as the ABC show was ending and took many of its cues from its live-action counterpart. The episode set-ups, cliffhangers, larger-than-life traps, Chief O’Hara, Robin’s “Holy! –” expressions, even the way Commissioner Gordon talks, are just some of the examples of how the DNA carried over.

2. Which is unsurprising, because think about how long a shadow the live-action show cast for decades on popular culture. Until Tim Burton’s Batman ’89 came along, Batman ’66 was how the average person thought of the Caped Crusader — often for the worse. And it’s not like it ended there. Only now that a generation or two — and dozens of cinematic, comic-book blockbusters — have passed do people see Batman ’66 as a nostalgia thing. 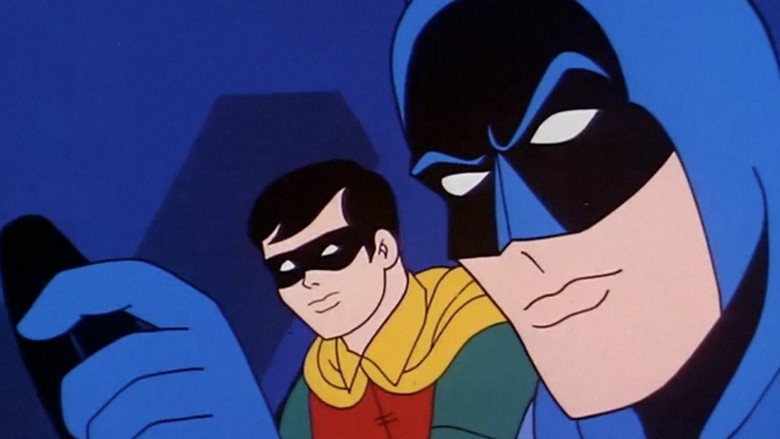 3. Even as the comics themselves were reverting to Batman’s dark roots, Filmation’s brighter version chugged along for 17 segments (each including a two-parter and a shorter, one-parter) on CBS, then syndication. And it kept going. Filmation Batman‘s sensibility paved the way for his portrayals on Scooby-Doo and Super Friends — and, of course, the lamentable 1977 Filmation series.

4. Olan Soule is the only Batman voice to give Kevin Conroy a run for his money. Different styles, different times, different concepts. Both indelible. Casey Kasem made for a great Robin, too.

5. The focus on the Big Four villains — Joker, Penguin, Riddler and Catwoman — plus top second-stringer Mr. Freeze, is another example of the Batman ’66 influence. Filmation exec Lou Scheimer’s crew knew what they were doing. On the flip side, I could also see Simon the Pieman as a Batman ’66 villain. 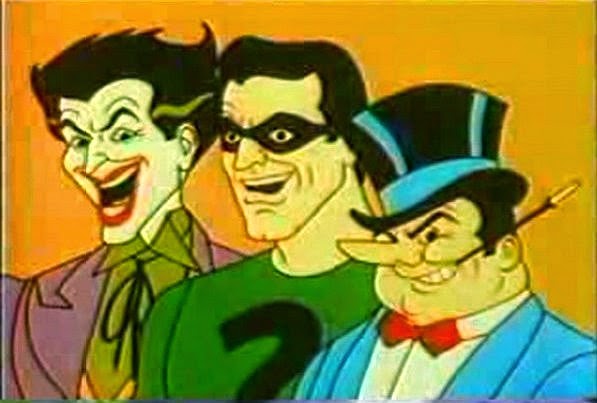 6. Of course it would annoy me as a kid, but now I love it whenever the characters go off-model. Watching for Robin’s floating chest emblem or Batman’s color-inverted logo is great sport. 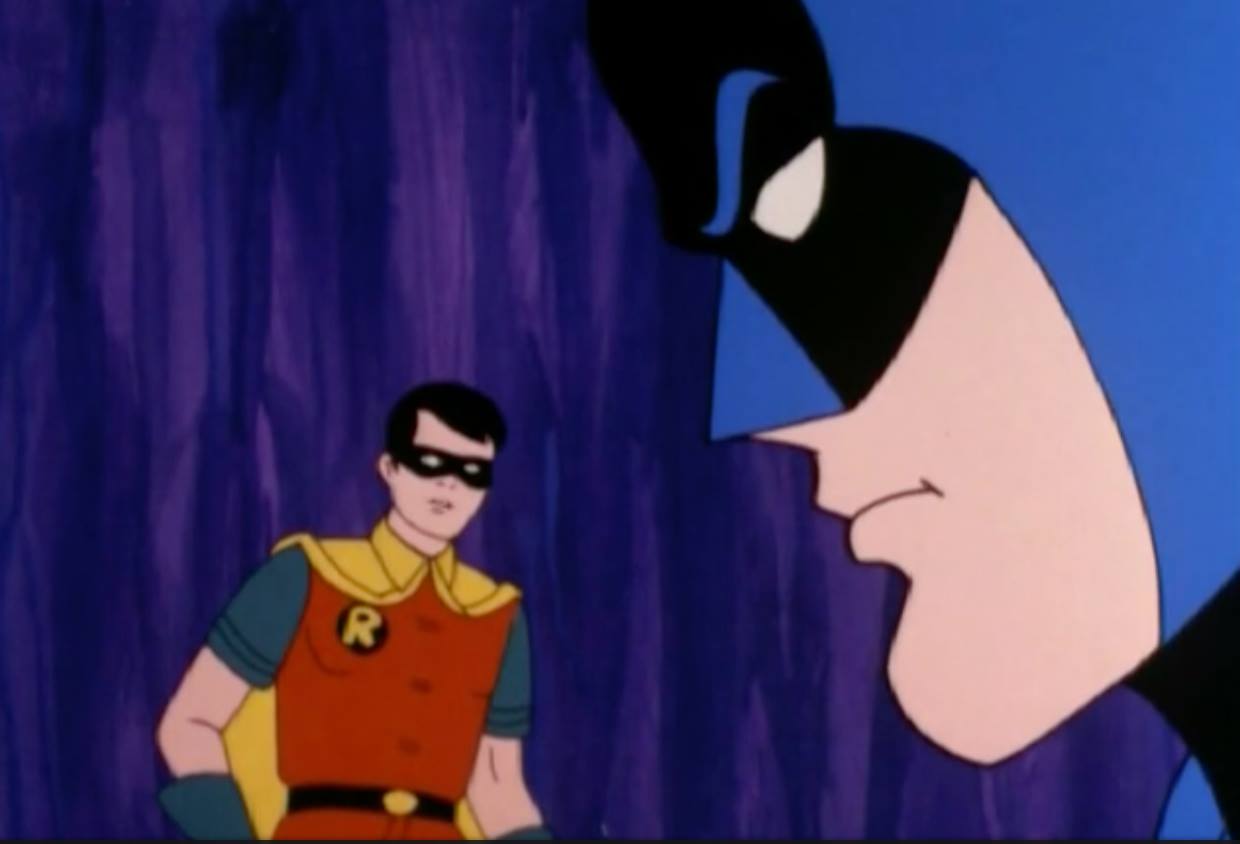 7. Wouldn’t you love to see a set of Filmation action figures? Not just Batman but the other DC heroes and villains as well. In a way, they’ve been done across various lines because the designs are based on the characters’ classic looks. But there’s enough that makes them distinct — especially when they’re off-model — to give the idea some agency. Plus, that Batmobile! Which you can actually get from Eaglemoss: 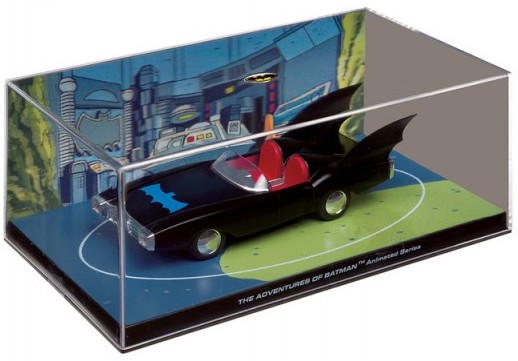 8. It wasn’t until I watched these as an adult did I realize just how much these cartoons got into my psyche. I realize that when I played with my Megos as a kid, my Riddler voice was the one from Filmation, not Frank Gorshin. I see now that Ted Knight was trying to approximate Gorshin’s stilted delivery and maniacal laugh but when it came out of my mouth it sounded like Knight. Same with Larry Storch’s Joker. 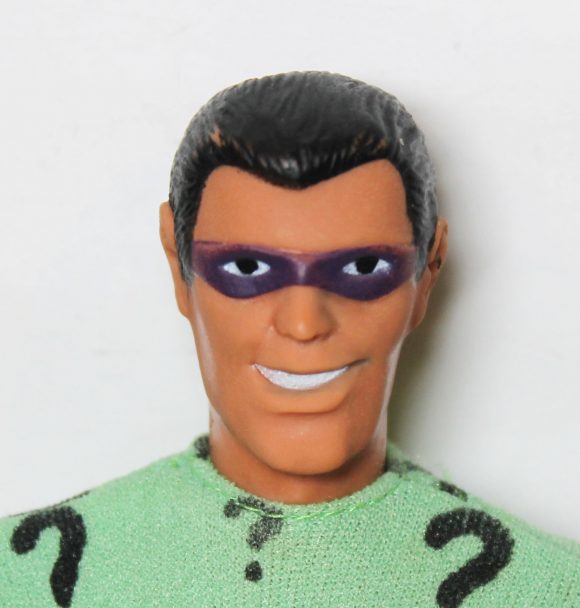 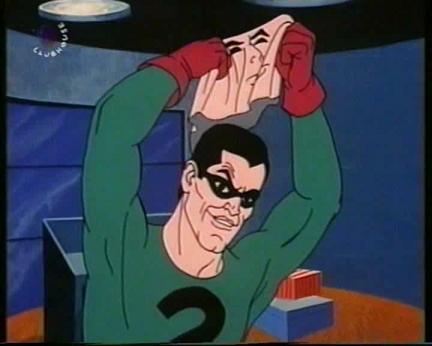 9. Favorite sequence. The deathtrap from How Many Herring in a Wheelbarrow?, by Bill Keenen: 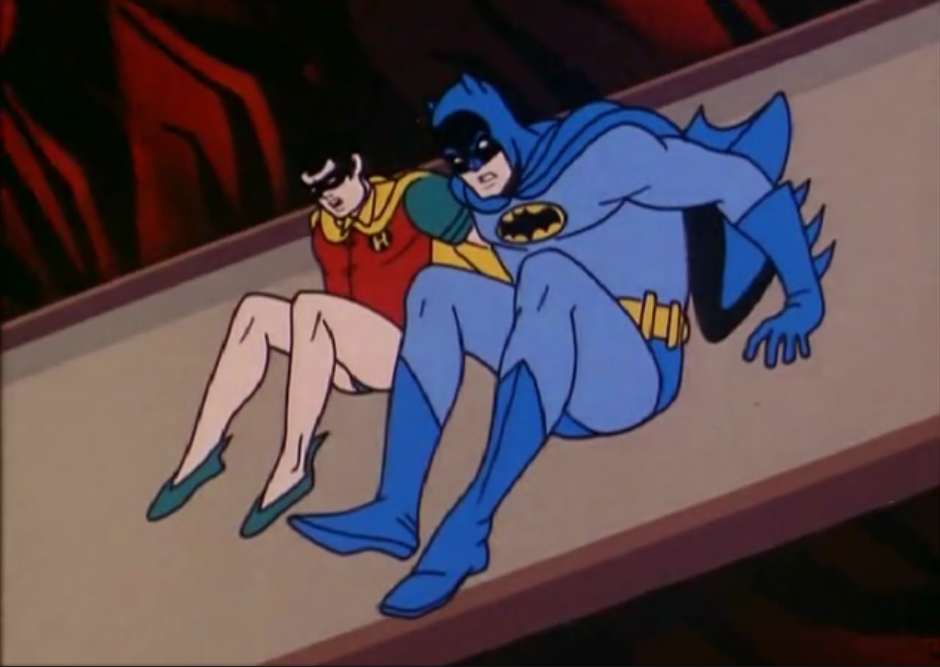 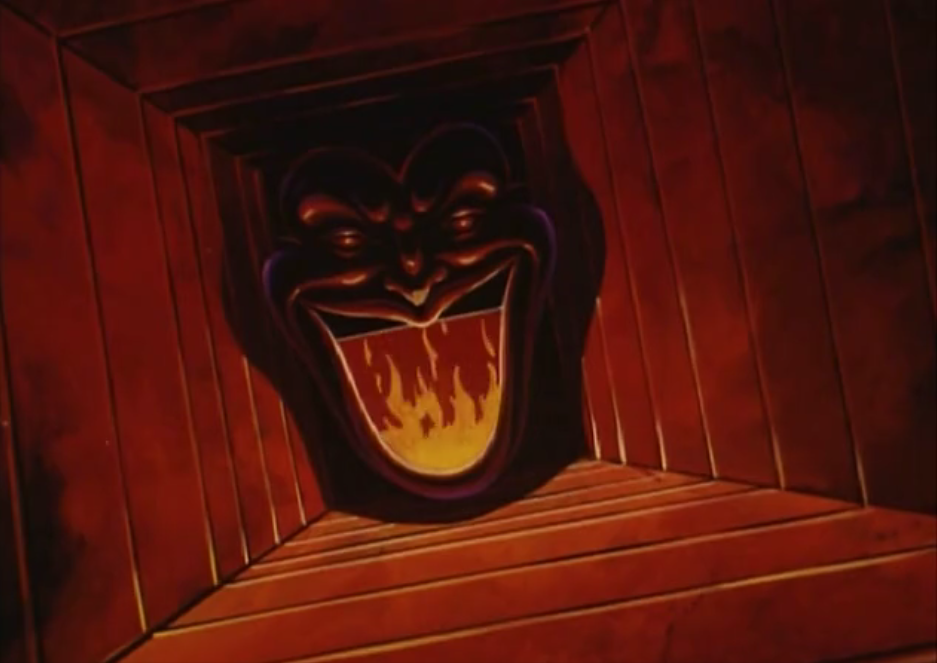 10. When I think of Filmation Batman, I first think of being at the Tagliaferris’ house. I was an AM kindergarten kid and Marilyn Tagliaferri took care of me in the afternoon while my Mom and Dad worked. My sister and I became friends with their kids and I remember watching Filmation Batman there on New York’s Channel 5, interspersed with Aquaman cartoons. Kind of puts me in the mood for a peanut butter and jelly sandwich.

11. Otherwise, Filmation Batman was kind of a moving target well into adulthood. It seemed to move in and out of the programming schedule with regularity and when it was gone I would always miss it. By the time I was an adult, I’d seen the Superman and Superboy cartoons and the shorts with the other Justice Leaguers but so much of it became a faint memory until a few years ago when they all finally became available again.

12. That said, the cartoons are of a widely varying quality. The animation is wonky, of course, but that’s part of the charm. And the transitions are fun — floating Batman head anyone? — and clever. The stock footage too: Robin throwing the Batarang, Batman and Robin punching the screen. Great stuff. But I’m talking story. Some episodes really zip. Others, not so much, though they can be salvaged by a great sequence. 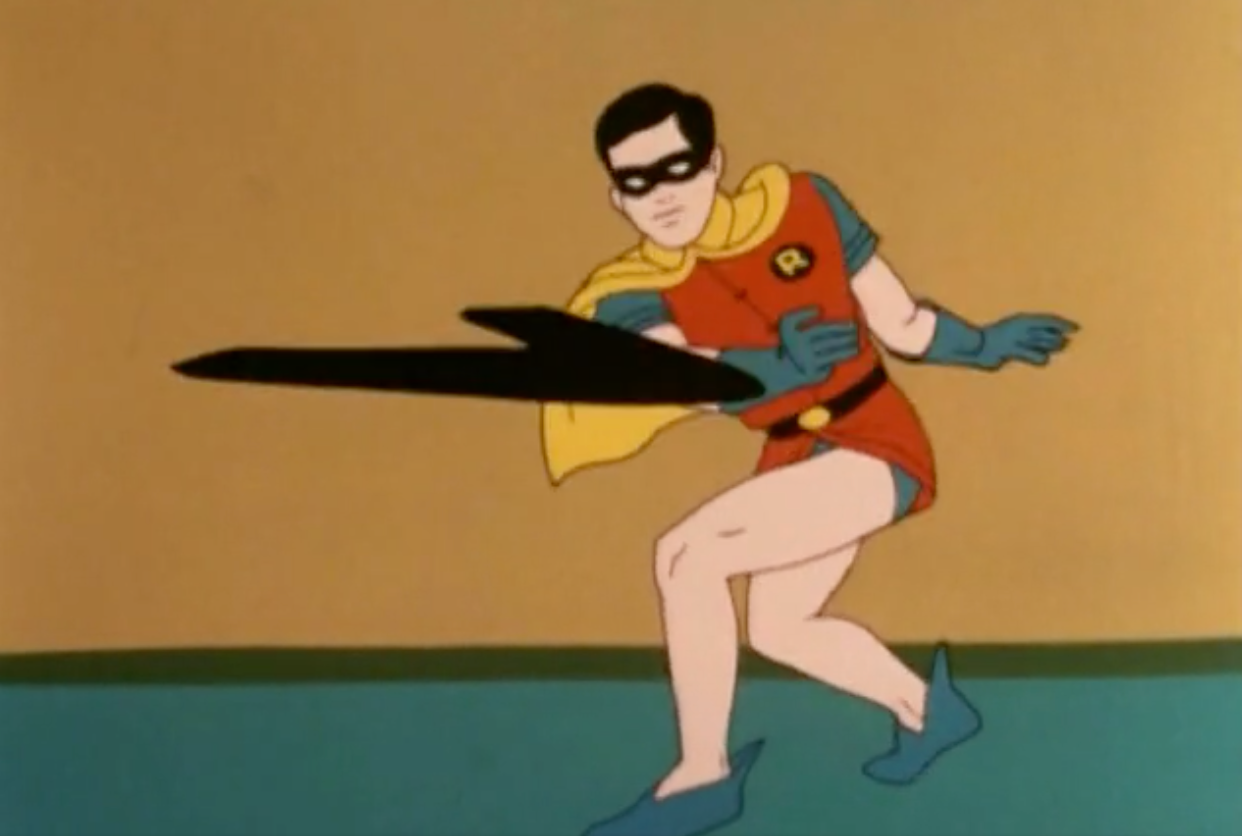 13. Which brings me to my other favorite sequence, from the great Bob Haney’s From Catwoman With Love, when Batman disarms the booby-trapped “gifts” from the Big Four villains: 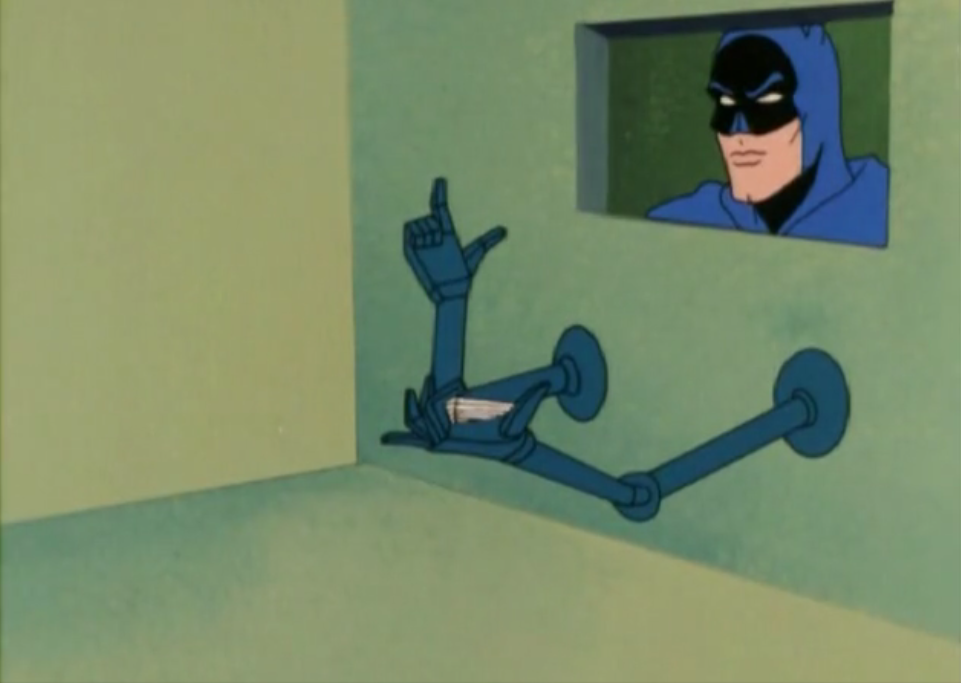 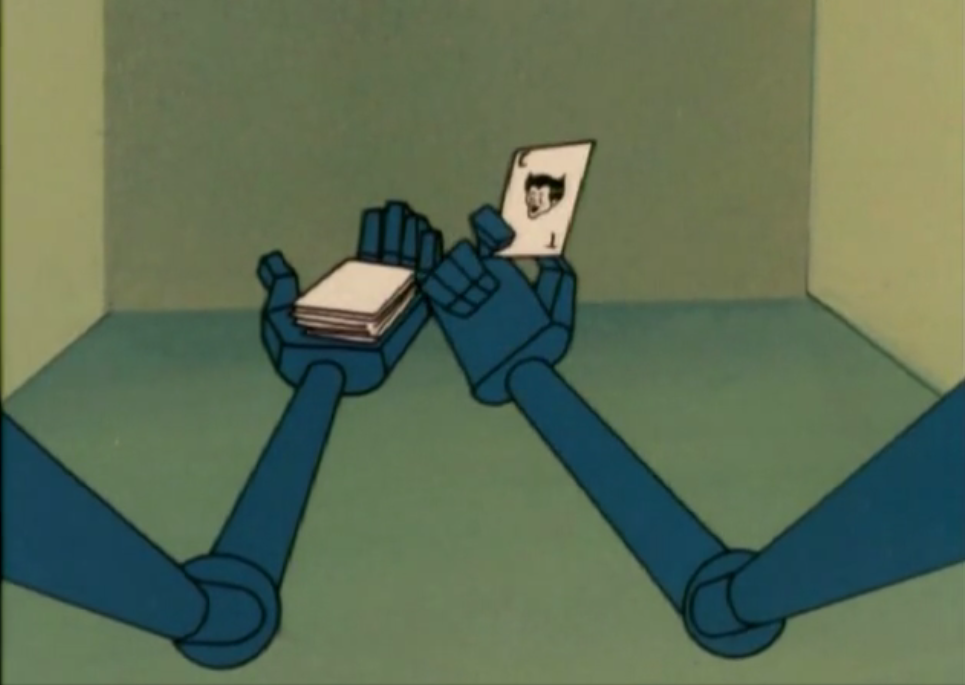 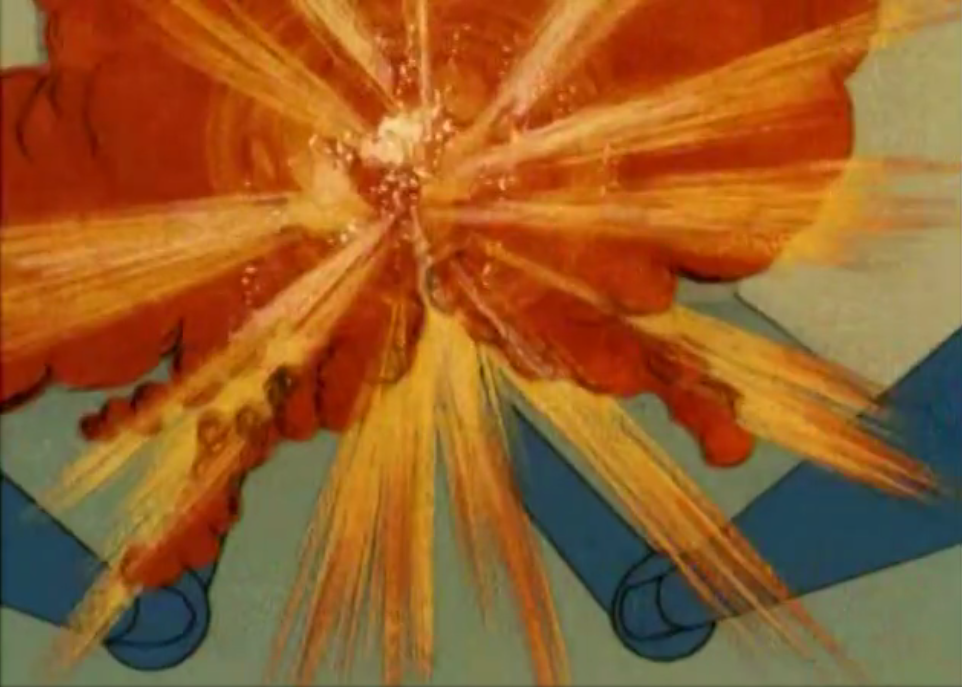