The WATCHMEN Page That Gibbons and Moore Gave to Neil Gaiman

A great story to remember on Neil Gaiman’s birthday… 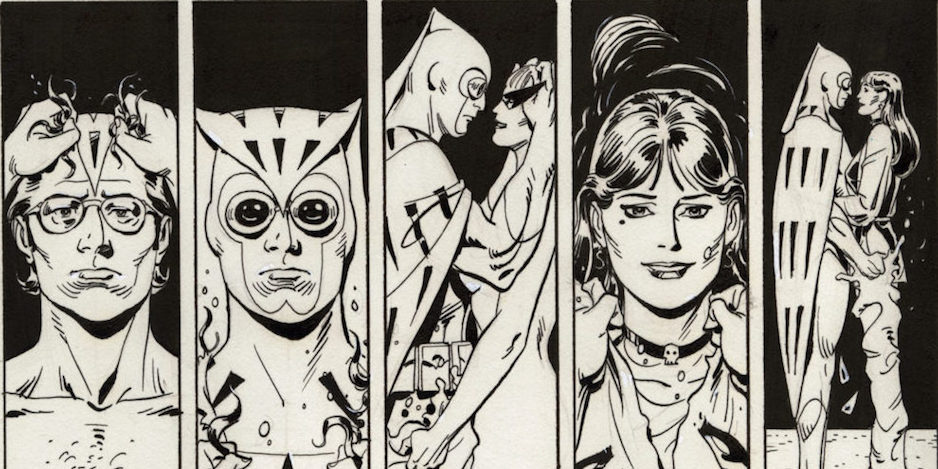 UPDATED 11/10/20: Hey, today is Neil Gaiman’s 60th birthday! Seems like a great time to reach into the vaults for this 2014 piece about Dave Gibbons, Alan Moore and Gaiman from THE DAVE GIBBONS INTERVIEWS. Some of the references are dated (the Watchmen Artifact Edition has been out for some time) but the meat of the interview is what matters. Dig it. — Dan

We decided to bring you something a little special for the final installment of the Dave Gibbons Interviews:

One of the big announcements in comics last year was IDW’s forthcoming “Watchmen Artifact Edition” — an oversize tome of reprinted original Dave Gibbons pages, as part of their massively popular upscale book line. So naturally, I had to ask Gibbons about the project.

As he’s been throughout, Gibbons was generous with details — and now IDW has provided pages for an EXCLUSIVE PREMIERE here at 13th Dimension. So check it out and enjoy. Oh, and if you wanna know how to get a jump start on getting your hands on this awesomeness, see below.

(If you’re just joining us: Part 1, about working with Alan Moore, Frank Miller and other collaborators, is here. Part 2, about Gibbons’ current projects like Treatment and his origins, is here. Part 3, about his overall thoughts on Watchmen in book and film, is here.) 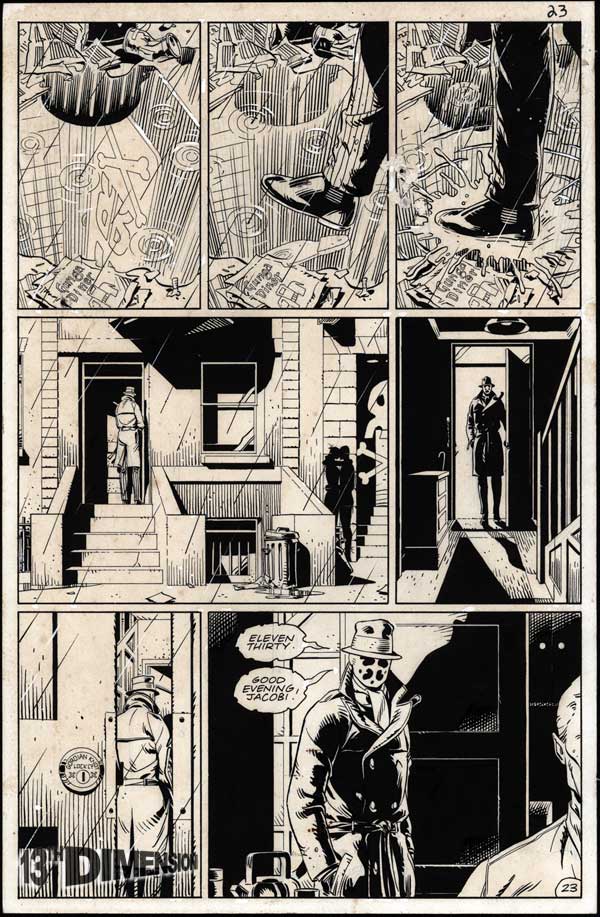 Dan Greenfield: How much input do you have in the IDW Artifact Edition of Watchmen? What’s been the process? When will it be coming out?

I think it may be because when I was starting out in comics, I started off by doing balloon lettering. In those days, in England, artwork would be fully drawn in ink and then sent to the letterer who would then stick the balloons on on sticky-back paper. So every week, I would get a big roll of artwork drawn by some wonderful artist —  people like Ken Reid, Don Lawrence and Solano Lopez — and I’d get to study this original artwork as I was lettering it.

So I’ve always felt it’s a very educational and inspirational thing to do, to look at original artwork. And these IDW editions are the next best thing plus they’re a lot cheaper than buying original artwork. 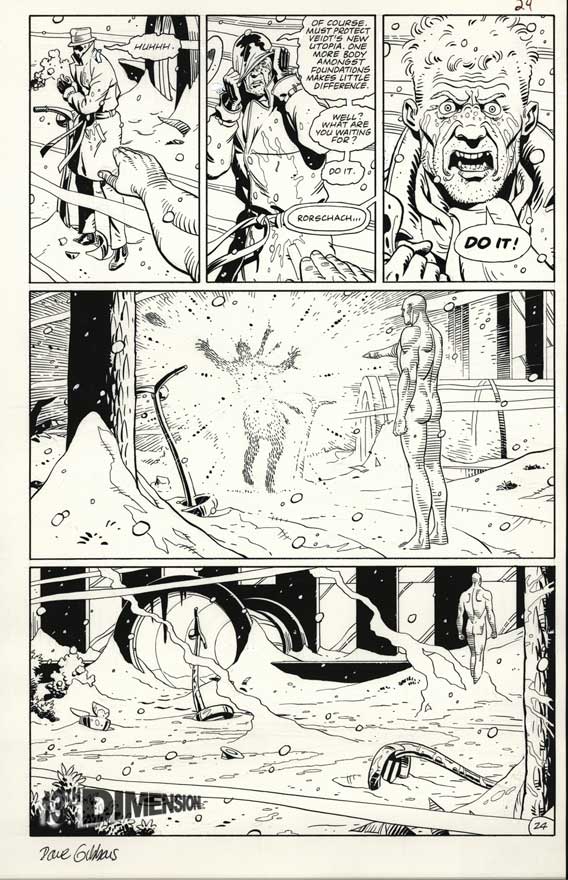 I actually proposed to (special projects editor) Scott Dunbier that they do a Watchmen version. I think I asked him if they were thinking of doing it and he said no, they hadn’t, because DC wanted to do all their own material but he said, yeah, they’d pursue it.

To their credit, DC were happy to let IDW go ahead and do a Watchmen edition with my blessing and my collaboration. So I’m doing all I can to get in touch with people who I know have got pages of original artwork but it’s spread far and wide right now and it’s so valuable it’s sometimes quite difficult to find, which is why it’s going to be an incomplete story.

There’s something like 360 pages of artwork. We’re hoping we’ll get at least a hundred, maybe a couple of hundred of those pages, if we’re lucky. So there will be some complete sequences. There will be some classic pages.

In fact, I was talking to Neil Gaiman a couple of weeks ago — managed to have a catch-up with him over a cup of tea, which was great — and I mentioned this project to him and he’s got one particularly prime page that Alan (Moore) and I gave him back in the day when he used to help us with sourcing quotations and so on. He’s got the dream sequence — the Nite Owl dream sequence where there are, I think, like 20 panels on the page. So that’s a real iconic and favorite page. 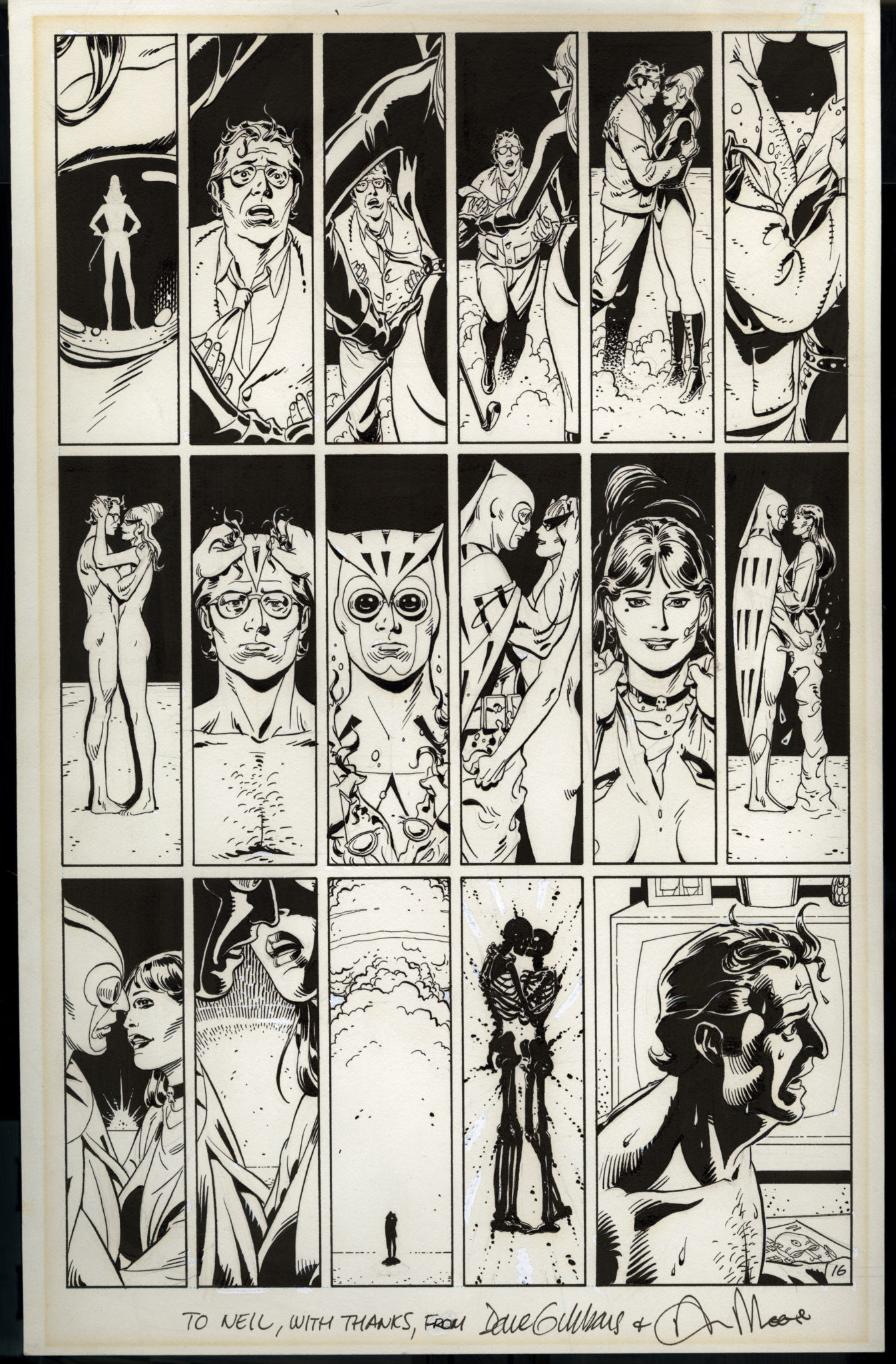 There’ll be some real favorite pages in there, the covers as well. There are some other bits. I’ve got some full-color stuff that I did for games and promotional stuff that I’m gonna get some really good scans of. There’s gonna be some of John Higgins’ color guides. There’s gonna be a lot of really, really interesting stuff in there that I think will make it indispensible to a true Watchmen fan. I certainly can’t wait to have it on the bookshelf. It’s a long, long time since I saw any of the original art.

So that’s it for that other than to say, when will it be coming out? I understand it’s going to be next summer. Obviously we’ll let everybody know beforehand but I think that’s what we’re looking at, realistically speaking. 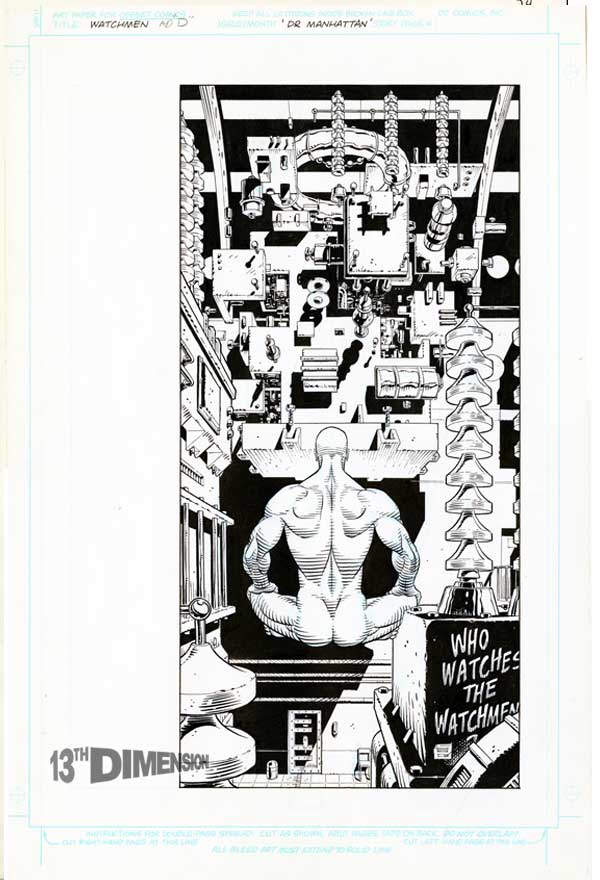 — WATCHMEN RPG Modules From the ’80s Coming Back to Print. Click here.