Continuing our 4-part series of interviews with the great Dave Gibbons, we talk about his current projects, favorite comics … and his major influences…

Last week, Gibbons discussed working with comics greats like Alan Moore and Frank Miller. Here’s the interview in case you missed it the first time around.

What are you currently working on?

Dave Gibbons: Well, at the moment, I’m actually writing a movie-length script for a thing called “Treatment,” which is a creation of mine, which has been published in Dark Horse Presents and also in the Madefire platform for IOS devices.

It’s set a little bit in the future. It’s like a freelance police force whose adventures are broadcast on live reality TV. If you want to know more, go to Madefire.com and download the app and get the free content. There’s quite a lot of Treatment stories on there, some of them drawn by me, a couple of them written by me, some done by other people. That will give you an idea of what I’m working on. 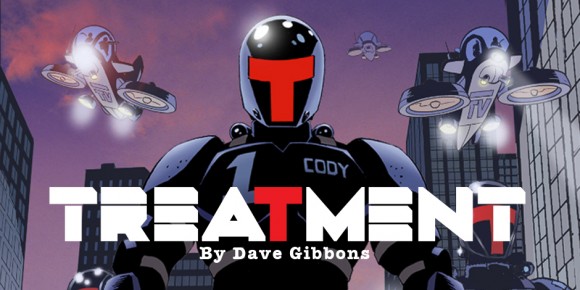 I’m also doing a few odd little bits of art but these days I’m not doing quite so much artwork. I’m much more interested in writing. And also I’m involved with a few technology companies doing promotional work and developing ideas for them, for Madefire, which is essentially a digital storytelling platform and also I’m a consultant to a company called Magic Leap, which I’m sure you’ll be hearing a lot about in the months to come but I’ll say no more for now. But very exciting stuff, very exciting storytelling opportunities these days.

Please take us back to the beginning and tell us how you got into the business with 2000 AD.

Ah, well … 2000 AD wasn’t quite the beginning. I’d done some stuff before that. I originally started by doing stuff for fanzines and for underground comix but then an art agent saw my work.

Unbelievably in those days there was enough comics work, even in Britain, that there were actually several dedicated artist agencies that did nothing but represent comics artists. Quite a lot of them were Italian and Spanish artists and I think they helped with translation and getting paid and stuff like that. But they had a few English artists on their books and an agent picked my stuff up and got me a few fairly lowly paid jobs to get my feet on the ladder. Then I started working on a more regular basis for DC Thomson who are a huge publisher of comics in Britain and they would let you draw the thing in pencil and then you’d send it to them and they’d send it back to you with corrections.

It was pretty basic stuff but it was the real nuts and bolts of storytelling and it was one of the ways, apart from lettering original art, that I got my grounding in how to do comics basically, so that was valuable. 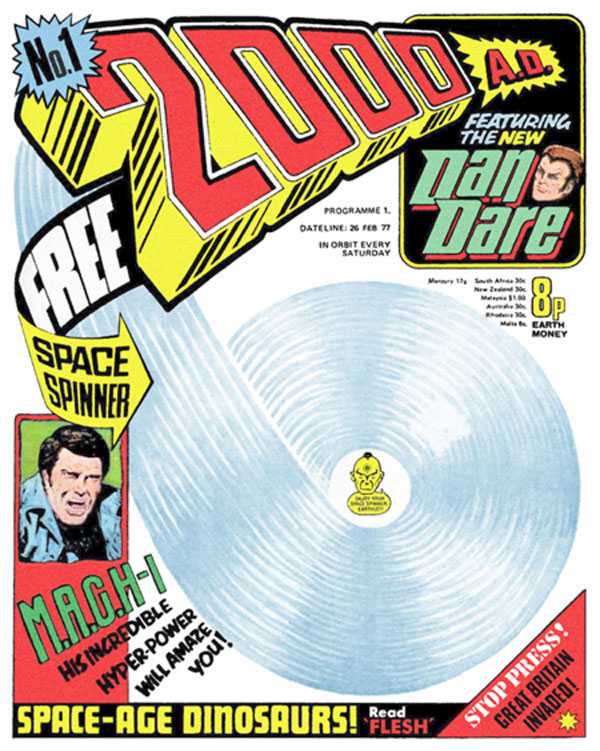 The first I heard of 2000 AD was when I bumped into a friend of mine called Mick McMahon who happened to live in the same town as me and he had some pencil artwork under his arm and it happened to be the first Judge Dredd story.

He said it was for a new publication that I think had not been given a name I believe at that point. So I said to my agent, “Hey, this sounds the sort of thing I’d like to do, Can you get me onto it?” And I remember me and him getting on a bus and going across Blackfriars Bridge on the Thames and going into the headquarters of IPC Magazines and being introduced to Pat Mills who was then the editor of 2000 AD.

He got me to do some samples of Harlem Heroes. They’d got some European artists to do these kind of flying, black superheroes, as they essentially were, and they hadn’t been able to capture it but he really liked what I did on it and so I was there from the very first 2000 AD.

My background is … I dunno … middle class. My dad worked in town planning for the local council, my mum was a secretary. I was academically quite bright. I went to a direct grant school which is kind of like what we would call a public school but you in the States would call a private school.

And it was a very traditional sort of British public school image with masters wearing gowns and prefects and very gothic kind of buildings. Comics were very much discouraged. I remember prefects raiding people’s desks and burning them. It wasn’t a very comic-friendly background although my mum and dad were always buying me comics. My grandparents, as well, would indulge my passion for them. 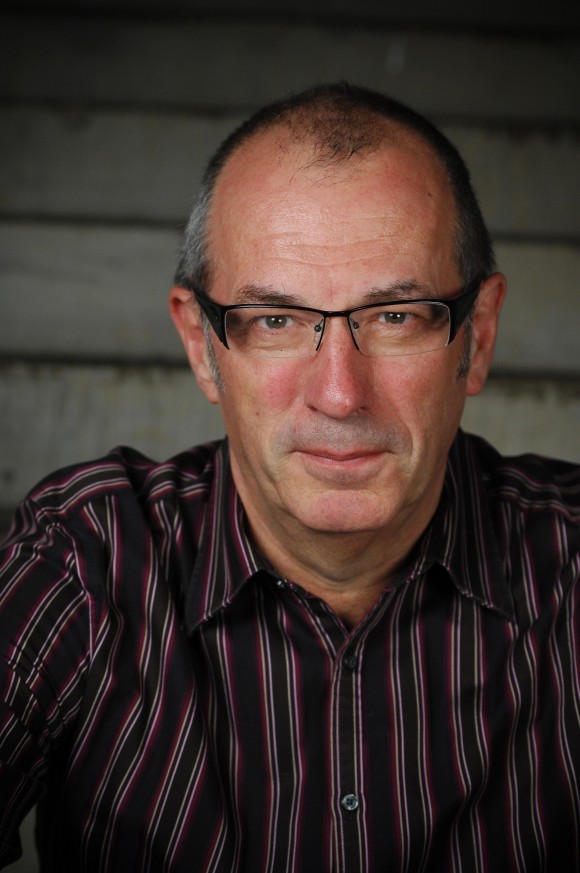 I used to help my dad draw plans so I knew how to use a pen full of ink and put color on and all that. And there was always pens and pencils and paper around the house, which helped. I was gonna be an architect but that was too much of a commitment. The fire wasn’t in my belly and I knew that I would drop out. I worked as a building surveyor which meant that I got a pretty good knowledge of how to build structures and how to draw structures which again helped.

I’ve been married twice. My first marriage, I had a son, Daniel, who now is a doctor. He could’ve done anything he wanted. If he wanted to be a comic book artist, I’d have said, “Yeah, be a comic book artist.” But he wanted to be a doctor so … you can never predict what your children are gonna do. I’m obviously very proud of him. I’ve got two stepdaughters, one of whom is a graphic designer and the other one is training to be a teacher.

I live in the countryside in England in a place, the address of which and look of which would probably remind readers of where Bilbo Baggins lived. So, that’s kind of … that’s me! 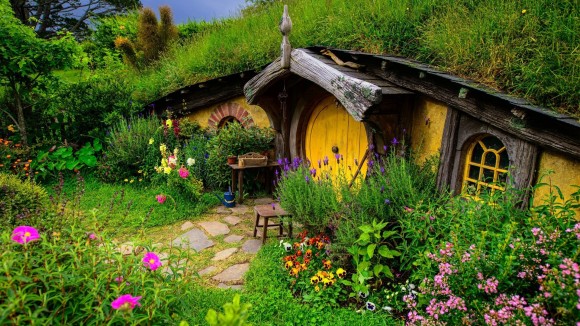 What were your earliest artistic influences and what artists have influenced your work in the time since?

Well, I loved a combination of British and American artists. And actually, although I didn’t realize it, a lot of European artists, as I mentioned earlier, drew a lot of the British comics. So it was artists like Frank Hampson and Frank Bellamy who worked for the Eagle; American artists like Jack Kirby, Steve Ditko, Curt Swan, Carmine Infantino; and a lot of European artists whose names I only discovered later like Ferdinando Tacconi, Gino D’Antonio, Jesus Blasco — a whole range. And I think those artists continue to influence me. 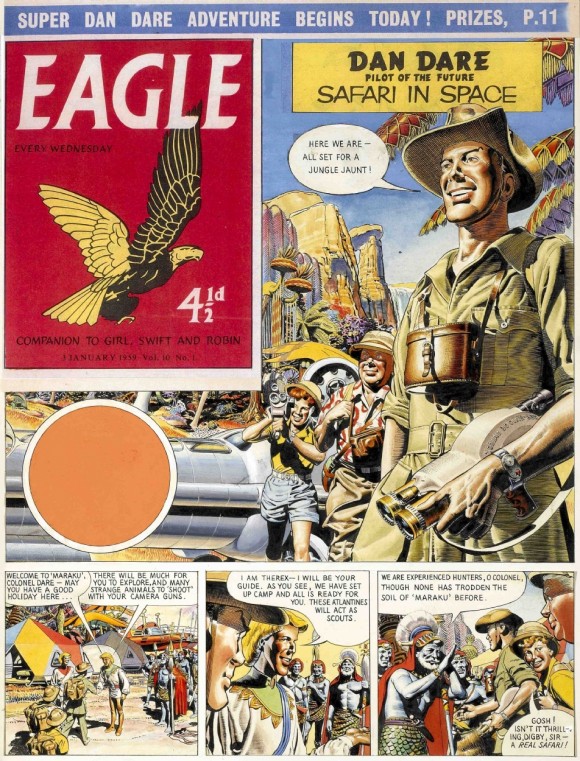 Hampson’s Dan Dare. The influence is pretty obvious, no?

But really, as an artist you’re influenced by everything you see, so obviously Neal Adams, Mike Mignola, Steve Rude .. .a lot of people I’ve been lucky enough to work with. Mick McMahon, Brian Bolland. I hesitate to make a list because I’m going to leave a favorite out. Yeah, there are a lot of really, really wonderful artists out there to be inspired by.

What comics did you read growing up? Do you still have any of them?

Well, I read, you know, Superman, Batman, Superboy. … I was in on the ground floor of the kind of Silver Age of comics and they were imported into Britain so I bought more or less everything that was on sale. And then the Fantastic Four started, so I used to buy all the Marvel comics.

And I had runs of all the early Marvels and the DCs and the ones I wasn’t able to get at the time due to the spotty distribution, I filled the gaps in in the collections. I had stacks of Eagle and Lion comics. I used to cut the front cover off the Eagle ‘cause that had Dan Dare!

So I’ve got a lot of really tatty old British comics. I’ve still got most of them. I’ve got my first Superman comic that I was ever bought, by my granddad when I was 7! So those are the kind of things. … I loved Mad magazine and particularly the reprints of Mad comics, which you could buy as black and white Ballantine paperback editions. I absolutely loved those with Wally Wood and Will Elder, who were also huge influences. 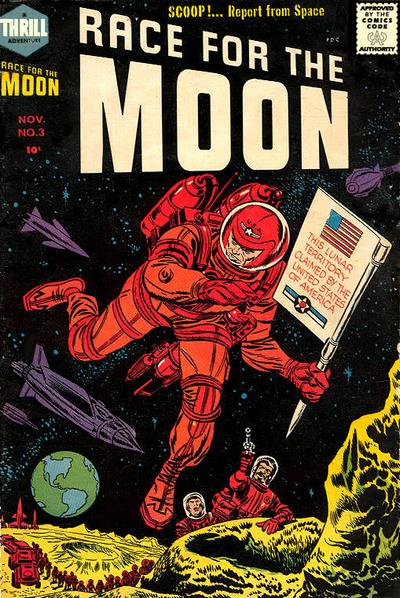 What’s your all-time favorite comic story that you had absolutely nothing to do with?

Well, when I was growing up I used to love science fiction and space comics and one of my favorites was Race For the Moon. This was a Joe Simon and Jack Kirby comic that was out in the mid-’50s over here in reprint and one particular story, which is called “Space Garbage.” Some fantastic Kirby artwork inked by Al Williamson. That was my favorite story when I was a kid that I redrew bits of, that I still actually treasure. And that I finally got to write an introduction to in the recent Titan Books collection of Jack Kirby! I insisted that I write the introduction to it, which they let me do, which was a great thrill. 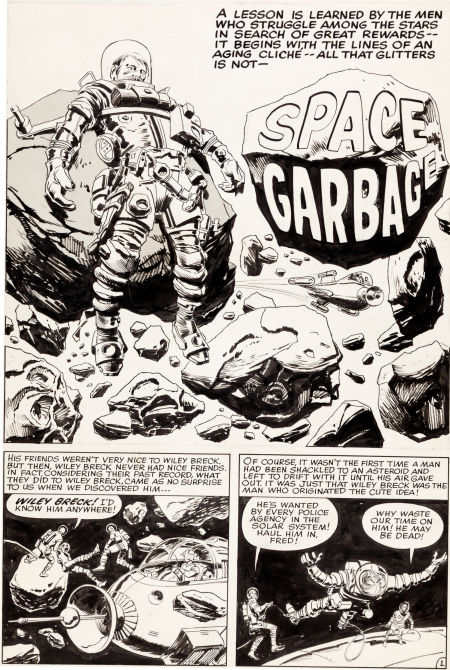 The fact that the artwork still exists, to me, is amazing! The fact that I own it is just beyond belief. Amongst all the books and toys and everything that I own, it’s probably about the most precious thing to me. It’s going to be framed and hung in my studio where I look at it every day. So that probably is my favorite of all time.

What other comics items that you own have the most sentimental value?

I’ve gotten probably most of the comics that I had growing up. I’ve got the first Superman comic that my granddad ever bought. That’s obviously got sentimental value. Copies of the Eagle I can remember my dad buying for me, Mad magazine. … I’ve got one of the props from the Watchmen movie and that’s the Nite Owl statue.

That’s rather a nice thing to have because it’s exactly as I drew it and that’s kind of a unique item. I’ve also got one of smiley face badges from the movie, which is an incredibly expensive prop. It’s not like a one dollar printed tin badge. It’s a handmade artifact with highly realistic blood on it. So that’s a precious thing as well.

Finally, do you read today’s comics? What are your favorite titles?

I tend to get … well I do get every comic that DC publishes and every comic that Dark Horse publishes. I’ve got an arrangement with my local comic shop that I just give them all the comics that I don’t want and then I go and pick up the other publishers that I do want. So I sort of read everything. I see nice things going on.

I tend to value the work by artists that I like, a lot of whom tend to be friends of mine so, anything that Alan writes or Frank Miller draws or Mike Mignola draws or Steve Rude or Garcia-Lopez or Mick McMahon. Those things are the kind of stuff that I read.

And I love things like Ed Brubaker and Sean Phillips. I love Mark Millar’s stuff. Those are the kind of things, some faintly offbeat stuff that I pick up from time to time. That’s a kind of overview of what I like.

Next week: Gibbons watches the Watchmen …