A special EXCLUSIVE Valentine just for you … 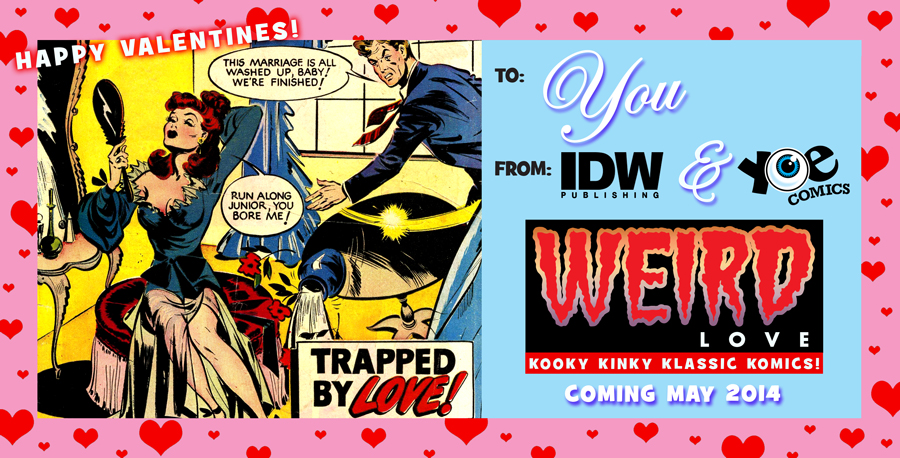 Our friends at IDW – we brought you EXCLUSIVE first looks at their Watchment Artifact Edition and Batman Silver Age Newspaper Comics – have put together this special Valentine just for us … and you!

Why? Because, as they put it … “Love is in the air and it smells WEIRD! It must be because IDW Publishing and Yoe Books! have shacked up again to collect the most sexy, bizarre, sick, twisted, politically incorrect, kinky ‘romance’ comics of the 1950s and beyond in WEIRD Love.”

“Amazingly, in the repressed 1950s and the anything-goes 1960s in some so-called ‘romance’ comics, there were some stories jaw-dropping sick, perverse, strange, kinky, twisted, and by today’s standards horribly politically incorrect. Only some kind of depraved person would now reprint them,” said historian Craig Yoe, “So, I am very excited and proud to be reprinting these gems!”

Starting in May, the bimonthly comic — for the bi-curious in all of us — will publish such titillating tales as “Love of a Lunatic,” “I Fell for a Commie,” “I Liked Older Men,” and “There’s No Romance in Rock ‘n Roll.”

Just wait until our very own IN BAD TASTE columnist Aimee LoSecco gets her hands on these!

But wait there’s more! The full-color collector’s edition that begins the WEIRD Love series “ends” with a pre-code comics ode to the female derriere. Really!

Leave your saucy comments below!