RESOLUTION: Ron Marz and Andy Lanning take you to infinity – and beyond!

Between them, Ron Marz and Andy Lanning have mapped much of the cosmic territory of the Marvel and DC Universes. Marz has penned acclaimed runs on Silver Surfer and Green Lantern, while Lanning has written similarly acclaimed runs on Legion of Super-Heroes and Guardians of the Galaxy — assembling the modern team that became the basis for the blockbuster Marvel movie franchise. 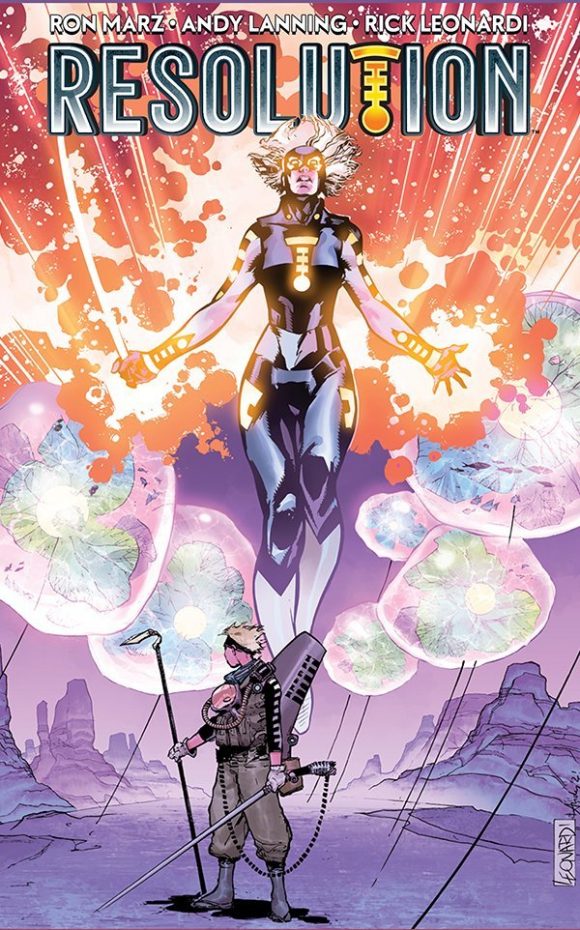 Resolution tells the story of Xaan Maddox, retired from a heroic career serving in the galactic peace-keeping force called The Resolute. But Xaan’s solitary life is upended when her archnemesis returns.

The Resolution graphic novel is live now on the new crowdfunding platform Zoop – and you can check out all the details here.

13. The Fantastic Four, Marvel. OK, some may say that the FF are not technically a cosmic team but I disagree, in fact, for me, they are the original cosmic team! I grew up on a diet of Star Trek, Lost In Space, Thunderbirds, Captain Scarlet, UFO, Dr. Who, 2000 AD, etc. When I read the Fantastic Four comics, I didn’t really see them as superhero comics but more like an extension of the sci-fi stuff I was binging on. They get their powers from cosmic rays, they defeated the Devourer World and half their adventures were either in space or other dimensions! These were always my favorite FF adventures and none were better than when they were drawn by the inventor of cosmic superheroes, Jack Kirby! Bloody magnificent! — Andy 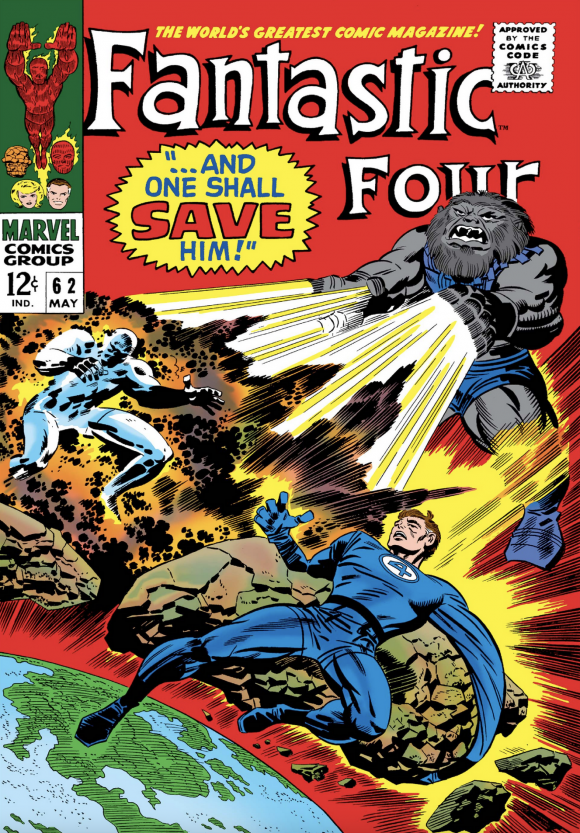 12. Star Hawks, Goulart and Kane. Star Wars changed the world in the summer of 1977, a cultural phenomenon like nothing before it. And once summer turned into autumn, there wasn’t enough to keep a Star Wars-crazed kid like me occupied beyond a few ancillary books and the Marvel Star Wars comics. Into that vacuum stepped Star Hawks, a sci-fi daily strip by Ron Goulart and Gil Kane. I loved it wholeheartedly, and made the adventures of Rex and Chavez a daily appointment in my local newspaper. — Ron 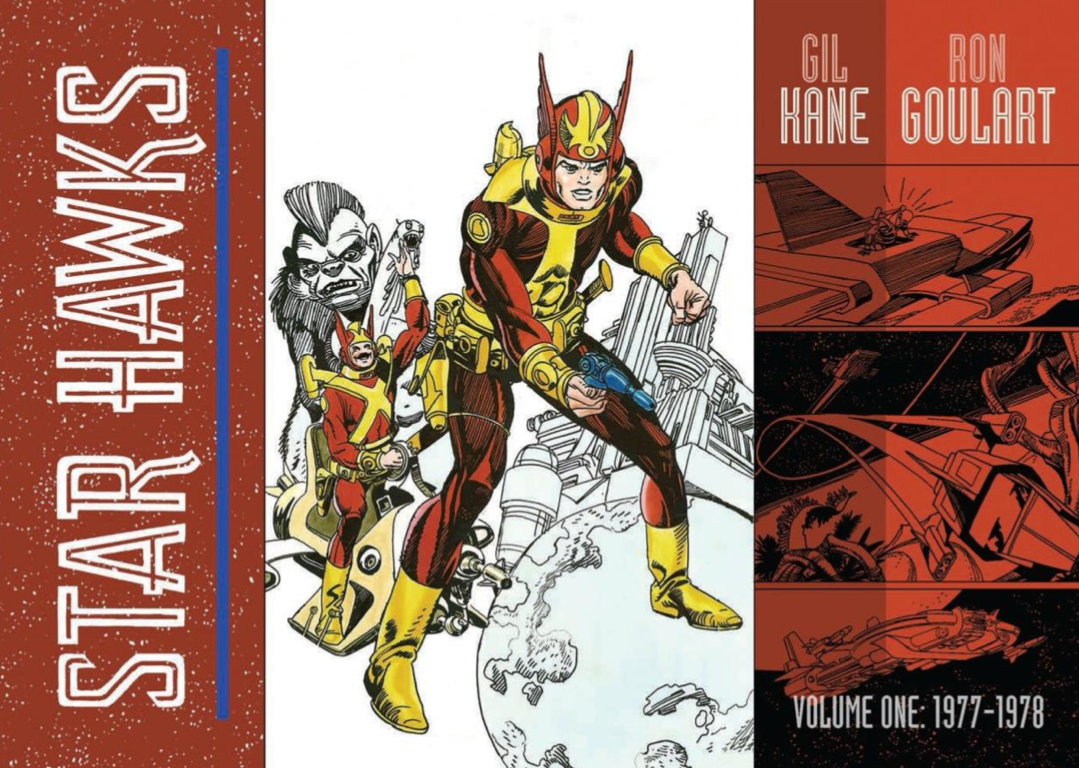 11. Imperial Guard, Marvel. A team I have been really fortunate to work on, but was also a huge fan of, as I was and am a massive fan of Dave Cockrum’s artwork. As a comics reader and budding artist I was always drawn (pun sort of intended) to the artwork on the comics I read and followed Dave from his run on Legion of Super-Heroes to the classic relaunch of the X-Men. No one could design cool superheroes and even cooler superhero costumes than Dave, and the Imperial Guard were Dave at his peak. The fact that they are a Marvel version of the Legion made them even cooler for me, and they first appeared as part of the classic Phoenix Saga, which was groundbreaking! — Andy 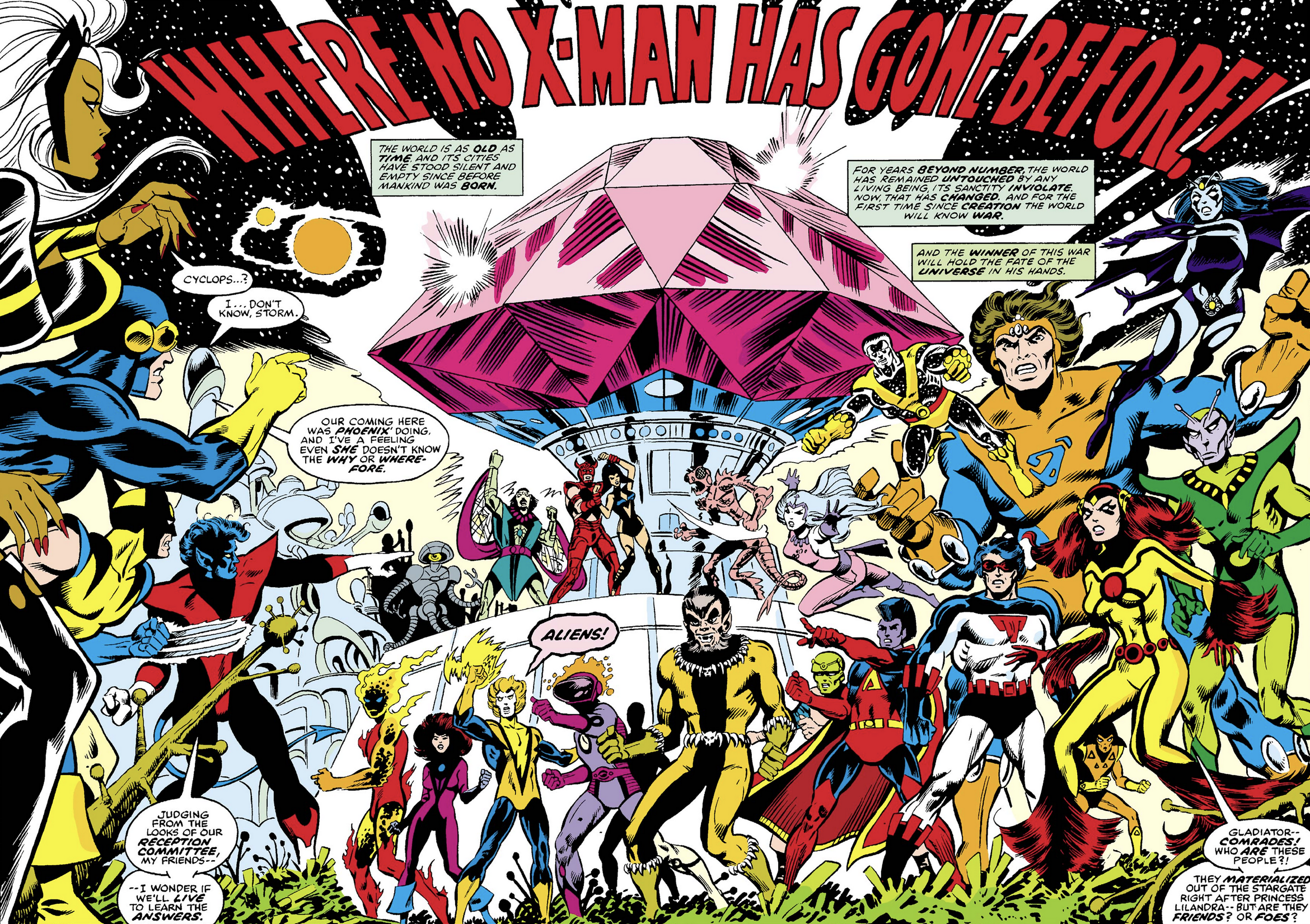 10. Dreadstar and Company, Jim Starlin. You can’t do a cosmic list without at least a couple of appearances by Jim Starlin. This time, it’s Jim’s creator-owned epic Dreadstar, featuring the eponymous hero and his team of misfits. The “…and Company” part includes the telepath Willow, catman Oedi, sorcerer Syzygy Darklock, scoundrel Skeevo, and the brute Teuton. Thankfully, the whole crew is back in Starlin’s new original graphic novel “Dreadstar Returns,” marking his first time writing and drawing the characters in more than two decades. — Ron 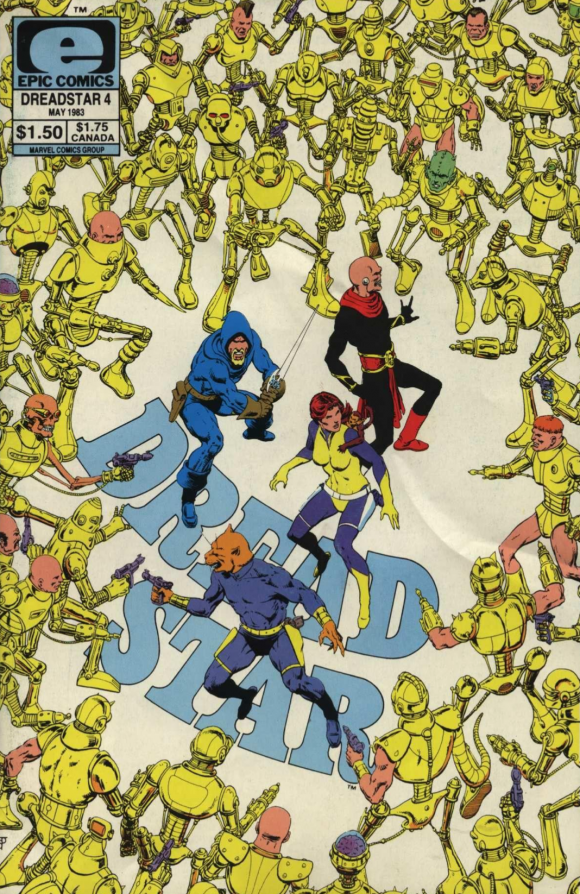 9. Alien Legion, Marvel. Elevator pitch: French Foreign Legion in space. The brainchild of writer, artist and editor Carl Potts, it’s brilliant thanks to its simplicity, and the fact that no character was safe. Anyone in the cast could buy it at any time (and did). Potts was aided and abetted by scripter Chuck Dixon, and a roster of art talent including Larry Stroman, Frank Cirocco, Mike McMahon, and Alcatena. Really kind of waiting for a Star Slammers/Alien Legion crossover… — Ron 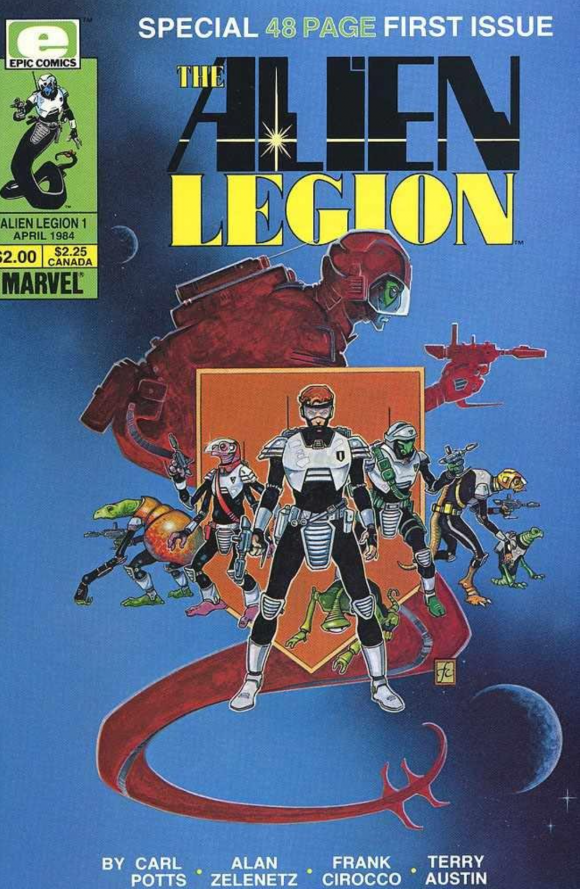 8. Star Slammers, Walt Simonson. No secret that Walter Simonson is one of my favorite creators. Star Slammers might not get the accolades of Simonson’s runs on Thor or Orion, but these space mercenaries stand shoulder to shoulder with Walter’s best. The concept dates back to Simonson’s college days. In his own words: “Once upon a time, there was a race of men who could out-shoot, out-fight, and out-kill anybody.” Sign me up. — Ron 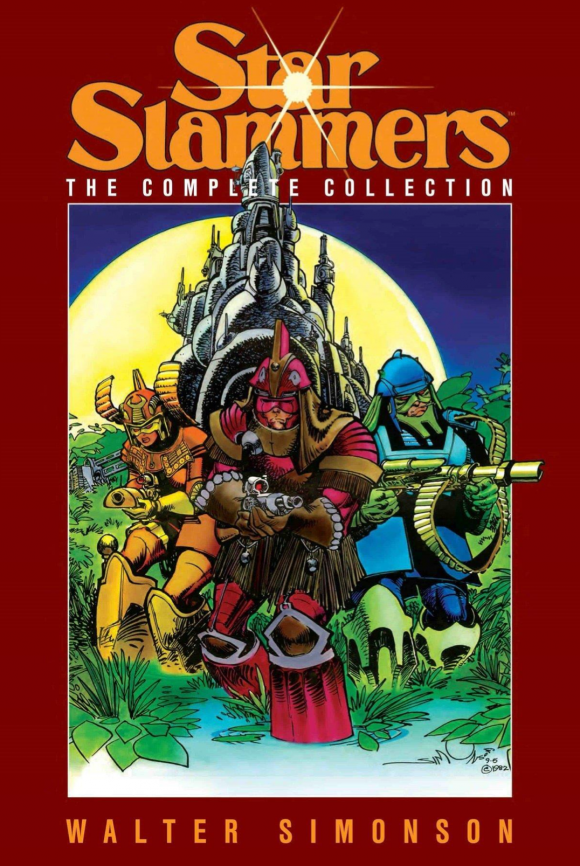 7. Infinity Watch, Marvel. Obviously having all six Infinity Gems in one place turned out to be not be such a great idea. So after the defeat of Thanos in The Infinity Gauntlet, my pal Jim Starlin’s favorite adopted son, Adam Warlock, handed out the gems to a trusted crew: Drax, Gamora, Pip the Troll, Moondragon, and… a mystery figure. Part of the intrigue of the series was finding out that Warlock had handed the remaining gem to Thanos. Starlin cosmic goodness. — Ron 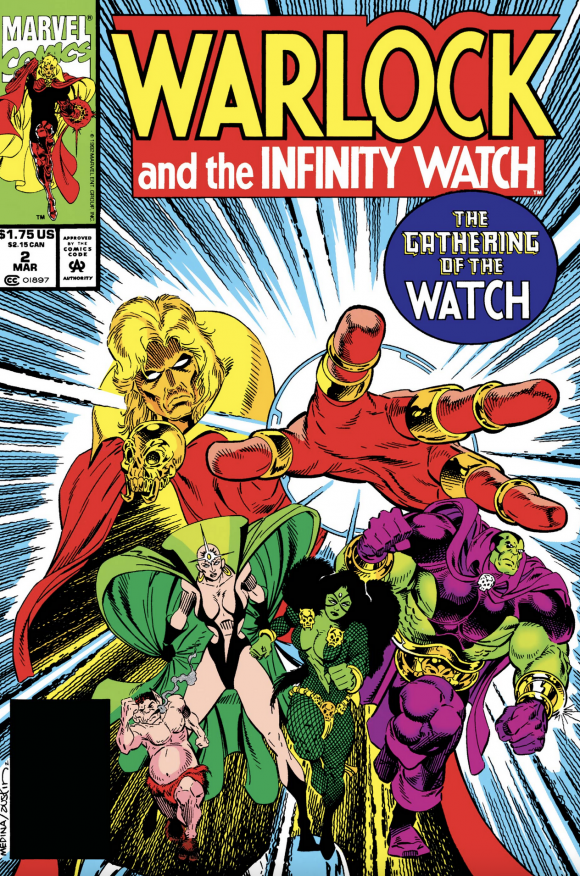 6. Guardians of the Galaxy (Original), Marvel. I couldn’t mention the current version of the Guardians without mentioning the original. This was another comic I was lucky to discover: I’m in the UK and when I grew up in the ’70s there were no comic stores, only local newsagents who would have a comic spinner rack but received monthly titles in a blind box that often changed month to month. Many times I would be following a story only to have the next issue fail to show up!! I supplemented my comic collection by buying other kid’s collections and it was in one of these that I came across Marvel Super Heroes #18, which told the GotG origin story by the great Arnold Drake and the legendary Gene Colan. I was a huge sci-fi fan and this comic blew my mind! — Andy 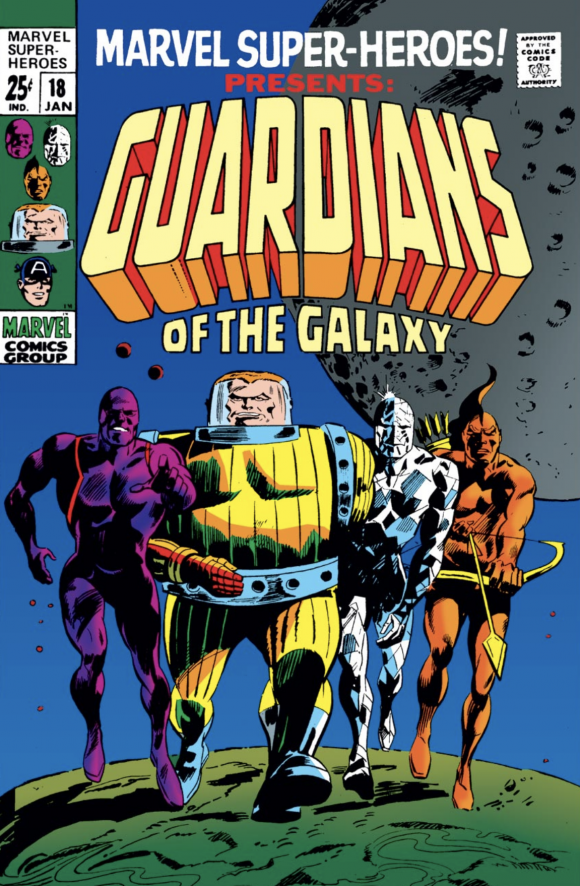 5. Nova Corps, Marvel. Heh! I feel like I’m rehashing my resume here but I was a HUGE fan of Nova before having the privilege to be part of the creative team. I was lucky enough to discover the first issue on my local newsagents’ spinner rack and really felt that Richard Ryder was my Peter Parker as I was able to follow his adventures from Day One, which obviously wasn’t the case for my other favorite characters like Spidey or the FF. — Andy 4. The Eternals, Marvel. I’m always of the mind that any Kirby is good Kirby. Full of trademark Kirby cosmic bombast, and 1970s influences like “Chariots of the Gods”-type cosmology, Eternals smacks a little bit of a Marvel version of New Gods. The heroes and concepts have proven elastic enough to be reinvented a few times already, including the Gaiman/Romita Jr. version, and the current Gillen/Ribic series. You know, if only they would make a movie… — Ron 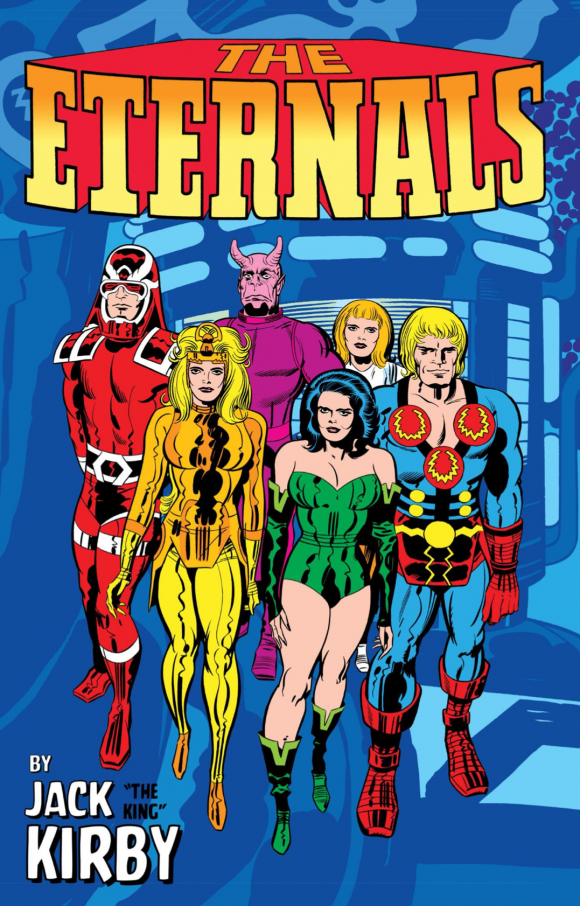 3. Legion of Super-Heroes, DC. Another home team I have to support! Before writing the LOSH for almost three years, I was a huge fan of the various iterations that came before: I first discovered them as backup stories in DC 100-page specials that reprinted classic Silver Age stories, like the resurrection of Lightning Lad. They really stayed with me and then I was a fan of the original Levitz/Giffen run, especially great stories like “The Great Darkness Saga,” and I was a HUGE fan of the Five Years Later storyline that Giffen did (he’s a common thread here!). — Andy 2. Green Lantern Corps, DC. Andy and I wrestled for the No. 1 spot, and obviously Andy won. I’m pretty sure he cheated. The Green Lantern Corps might not have a space raccoon, but it definitely has space squirrels… and damn near everything else. The sheer inventiveness of the Corps members, everything from an entire planet, to a vast array of alien life forms, to an unusually high number of earthlings with a power ring. Likely inspired by Doc Smith’s Lensmen, but the GL Corps is the granddaddy of cosmic cops. — Ron 1. Guardians of the Galaxy (Modern), Marvel. This was a no-brainer, really — you’ve got to support your home team! But, as much as I’m obviously very proud of the run we had on the Guardians and what it has developed into, I’d like to give MASSIVE props to Keith Giffen and Timothy Green who laid the foundations of the team in the Star-Lord miniseries that was part of the Annihilation-Conquest event. That’s where Rocket first teamed up with Groot. — Andy