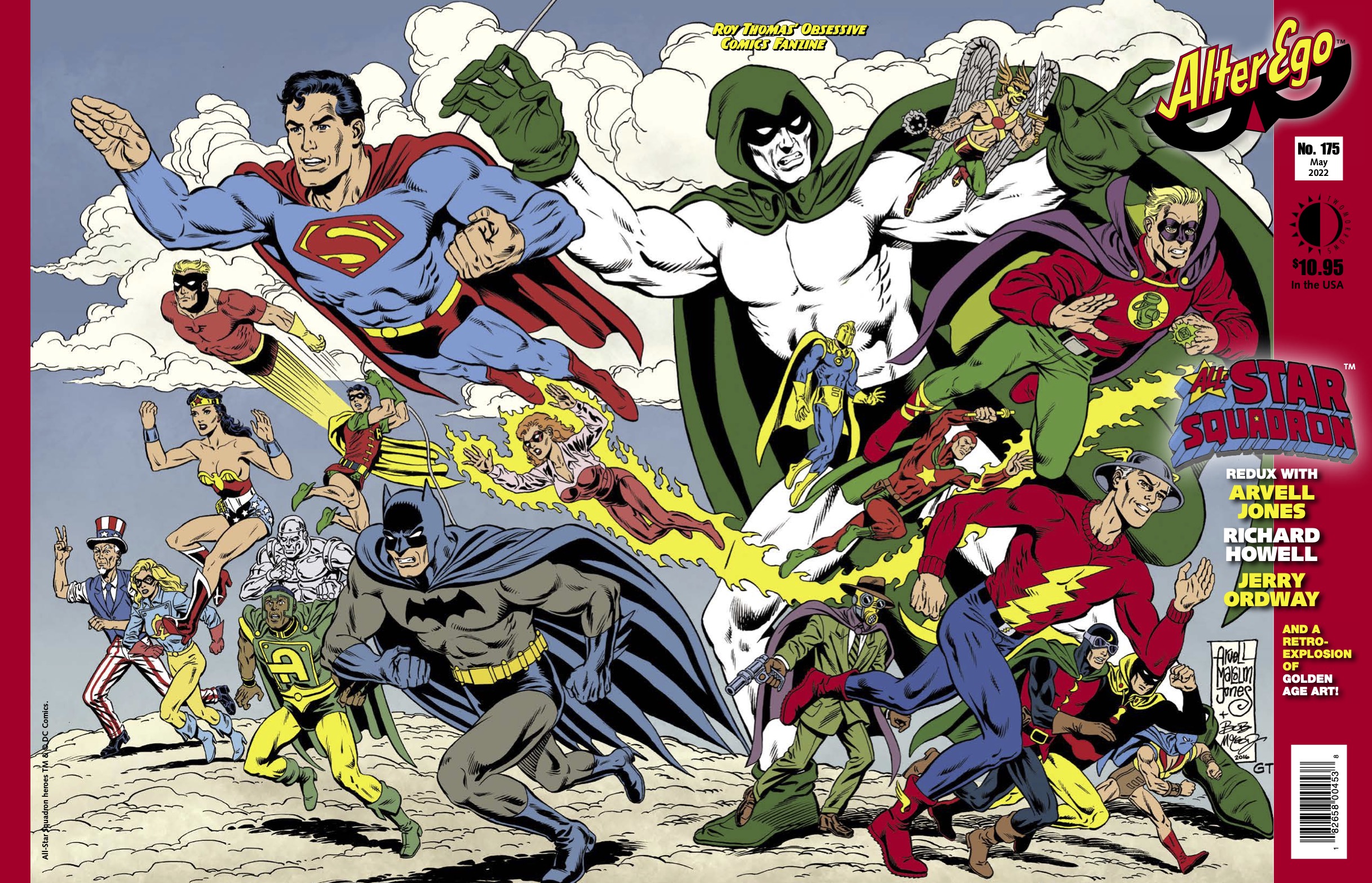 TwoMorrows’ Alter Ego #175 — the big, splashy All-Star Squadron issue — is due April 27 and for our EXCLUSIVE EXCERPT, we bring you part of Jerry Ordway’s interview about his Earth-Two travels.

It’s pretty groovy but I also recommend you pick up the issue (edited as usual by Roy Thomas) because this is just a mere snippet of the Ordway interview and there’s so much more on the docket. 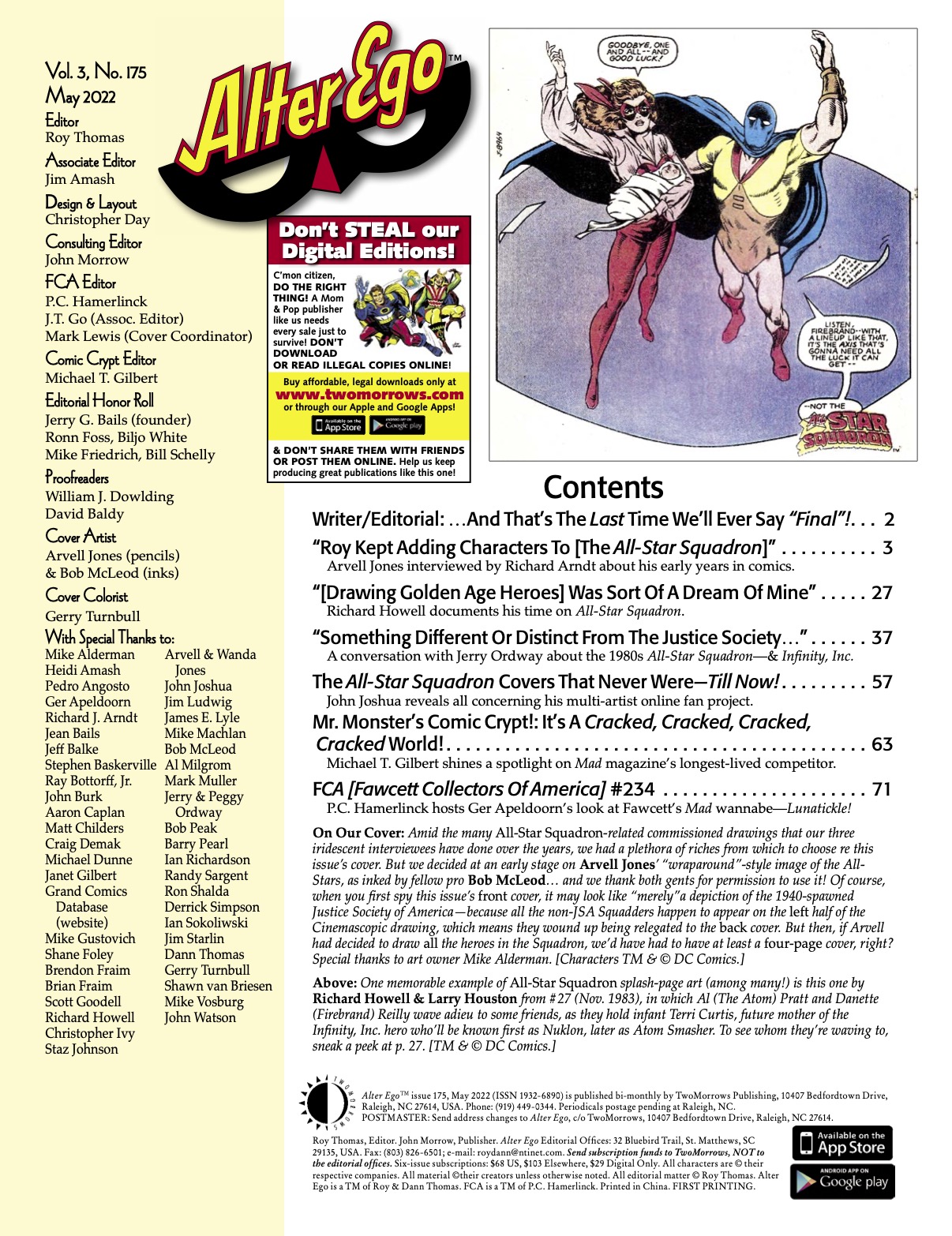 And here’s the segment of Jerry’s interview with Richard Arndt. 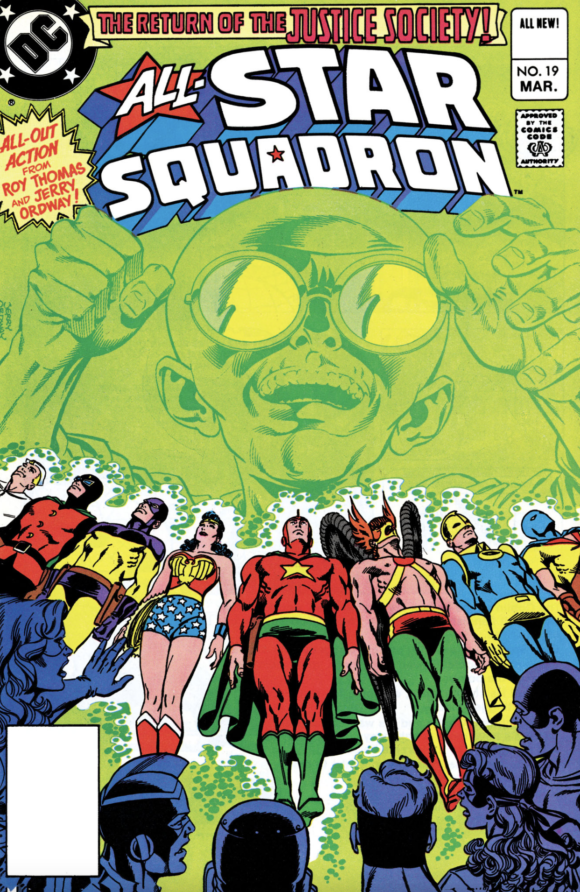 The way I look at it is that All-Star Squadron reminded me very much of what Roy did when he took over The Avengers from Stan Lee. At that time, he wound up inheriting the B-Team. Not the Avengers that everyone remembers from the early days, but the much-weaker team of Captain America, Hawkeye, the Scarlet Witch, and Quicksilver. Goliath and the Wasp had returned by the time Roy took over, but no Iron Man, no Thor. Roy gradually added in Hercules and whoever to bring up the power level for the Avengers; but, from a reader’s point of view, I thought the concept of a team based on members that were the B-level heroes, the concept that Roy revisited in All-Star Squadron, was brilliant.

In fact, Roy took characters from DC that weren’t even the B-Team, but really the C-Team—characters like Robotman, Johnny Quick, and Liberty Belle—and made them the centerpiece of
the group. He gave them back stories and characterizations and made the fans of the book care about these superheroes who’d previously been considered pretty minor characters. Roy’s take on those characters has really provided the background for other writers to continue to use them right up to today. 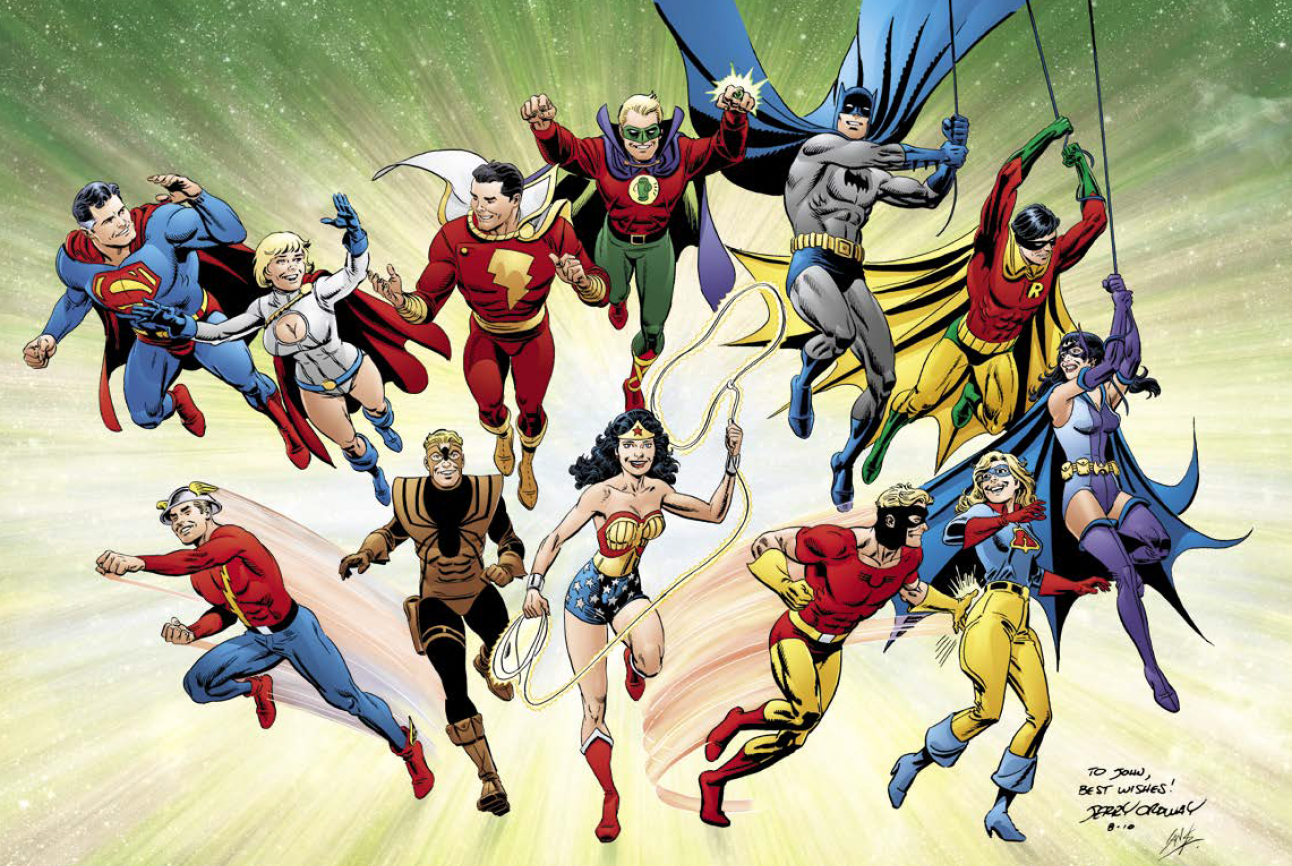 Arndt: I have to admit I wasn’t even aware there was a Robotman in the 1940s, as the only one I knew by that name was the character from Doom Patrol.

Ordway: Yeah, that’s probably the character most fans remembered. The good thing for me as a fan was that I bought all the DC books from, I guess the mid-1970s, when they were doing the reprints in the books when all the titles were 48 pages for 25 cents. To fill up those extra pages they used reprints of some pretty obscure stuff. That was good for me as a fan, because it filled me in on characters that I never even knew existed, many of them drawn by artists I loved. The “Johnny Quick” reprints had artwork by Mort Meskin, and that was kind of cool.

I think Roy gave those 1940s characters new life, just by developing them into a team where Johnny Quick was being kind of a smart-ass, the Shining Knight was a sort-of cross between Captain America and Thor in a way, and Robotman being annoyed by pretty much all the rest of them. There was a similar dynamic to what Roy had done in those inherited mid-1960s Avengers characters before he either created or settled on his own semi-regular bunch of heroes, many of whom were not the ones that Stan [Lee] had passed on to Roy.

Ordway: When I started on All-Star Squadron, I was the finisher, which is an amped-up version of an inker. I started working over rough pencils by Rich Buckler, and then, with #6, over rough pencils by Adrian Gonzales. [Previous to that] I had wanted to pencil, and I ended up getting an assignment to do an eight- or 10-page backup series, both pencils and inks, featuring the Creeper, that was to appear in Flash. I just wanted the opportunity to pencil. At that time, I was trying to convince DC to let me do that, and the editor on The Flash thought I could accomplish that on a backup strip.

I figured that if I did pencils and inks on the Creeper, I’d have to quit All-Star Squadron. I probably couldn’t make as much money doing that 10-pager, but it was easier than trying to convince DC that I could handle a 24- or 25-page book, which was the page count for story content at the time. 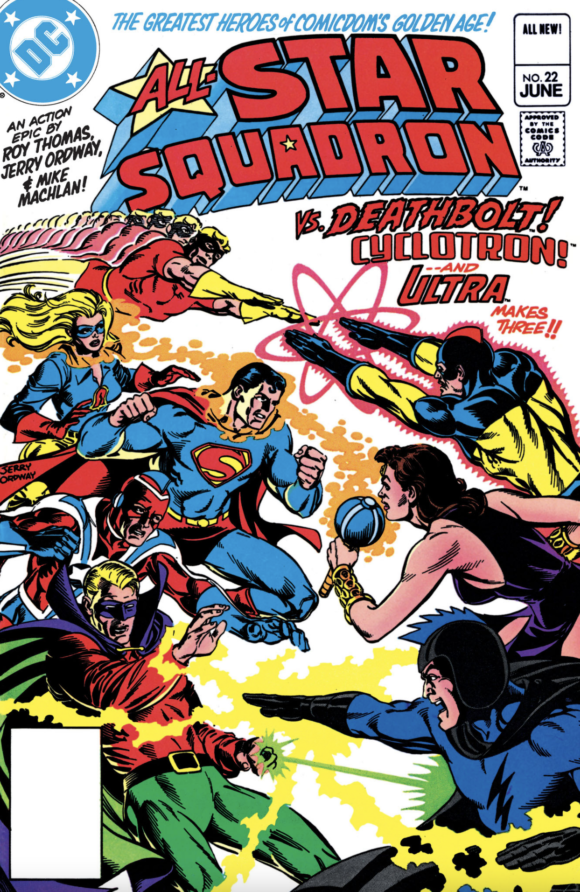 Ordway: A lot of the early All-Star Squadron books varied from 25 to 27 at the time. That length gave the DC books, especially the single-hero titles, the ability to allow the longer lead story to have a backup story featuring a character who didn’t have his or her own book at the time.

So, I was going to do the Creeper, and I told Len Wein, who was the All-Star editor at the time, that I was going to quit All-Star Squadron. He said, ‘Instead of doing that, why don’t you pencil All-Star Squadron?’ I didn’t want to have the current penciler [Adrian Gonzales] lose his job, and Len said “Oh, don’t worry! I’ll keep him busy. I want to shift him over to Arak,” which was another book Roy was writing. So, as long as the previous penciler wasn’t losing his job, I was fine with penciling the book.

The fun part for me, in doing All-Star, was that I grew up in Milwaukee, where my mom was over 40 when I was born. I was always surrounded by older people. She had a tavern and we lived in the back. The tavern catered to mostly old retired guys, who lived in rooming houses in the neighborhood. Mom had the tavern open from 7:00 in the morning until 8:00 at night. These guys were there
from the beginning to the end. That’s where they hung out — their daily routine. All these guys had stories. They’d all fought in either World War I or II. The young guys were from WWII. 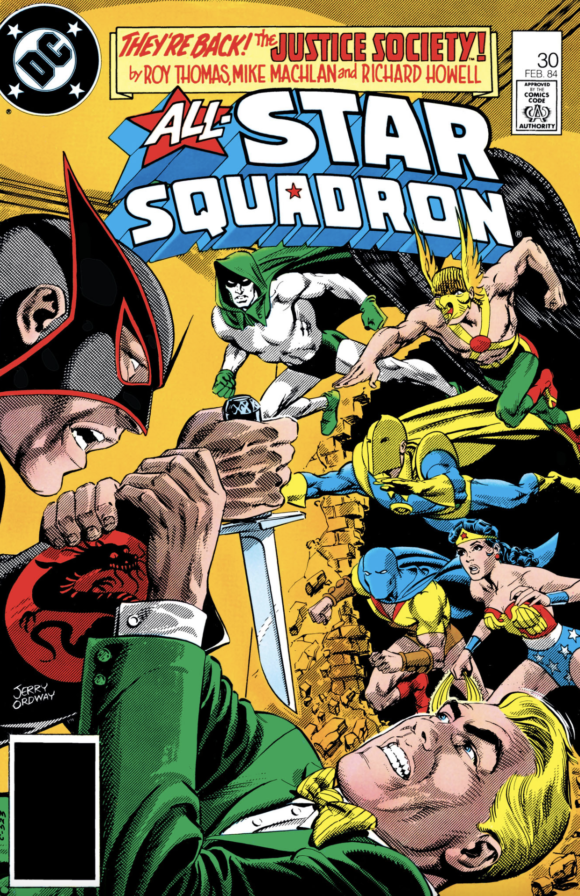 I grew up surrounded by ancient slang. Damon Runyon-ese slang. I felt I was very well-suited to drawing All-Star because of that background. All the guys in the tavern still wore the same type of
clothes they’d worn back in the day. They all wore hats. Those old battered-looking fedoras. I was accustomed to that sort of look. Whenever I’d meet somebody in the business who came from an earlier era, they’d always go, “Oh, I thought you were an older guy!” (Chuckles.) I’d ask them why, and they’d say that my style harkened back to the older stuff. I thought that was kind of cool, but it also made me think of how people make assumptions about you based on your work that aren’t necessarily quite accurate.

With All-Star I was actually trying to go the opposite of the Neal Adams style. That very contemporary look, the look of my generation, that he had developed.

Arndt: You’re right. If I was going strictly by your style, at least at that point, I would have been thinking more Curt Swan than Neal Adams as an influence.

Ordway: I just remember, very distinctly, that when I took on All-Star Squadron, Rich Buckler was still doing the Neal Adams swipes. I really didn’t want the book to look like a Neal Adams comic. I was convinced it should look like a 1940s book. I specifically used my artistic reference point as more Wally Wood or Will Eisner. I thought that would give the book a kind of style.

Alter Ego #175 is due out April 27 (though later in some places). The issue will be available at comics shops and magazine sellers but you can also order it directly from TwoMorrows. (Click here.)