I noted recently that I gave up being a continuity nerd ages ago, and that’s still true.

But since I opened the door last month when I wrote about how DC seemed to be reintroducing the original Earth-One (click here), I felt compelled to follow up with the publication of this week’s The Flash #22 and the conclusion to The Button.

In case you haven’t been following along, The Button is a four-part Batman/Flash crossover that sets the stage for this fall’s Doomsday Clock, DC’s already-controversial meet-up between Watchmen and the DC Universe. And while I have 13 reasons that I’m totally cool with a Watchmen/DCU pairing (click here — if you dare), I’m not nearly as interested in that aspect itself as I am in things like the return of Jay Garrick and what’s going on with the DC Multiverse. 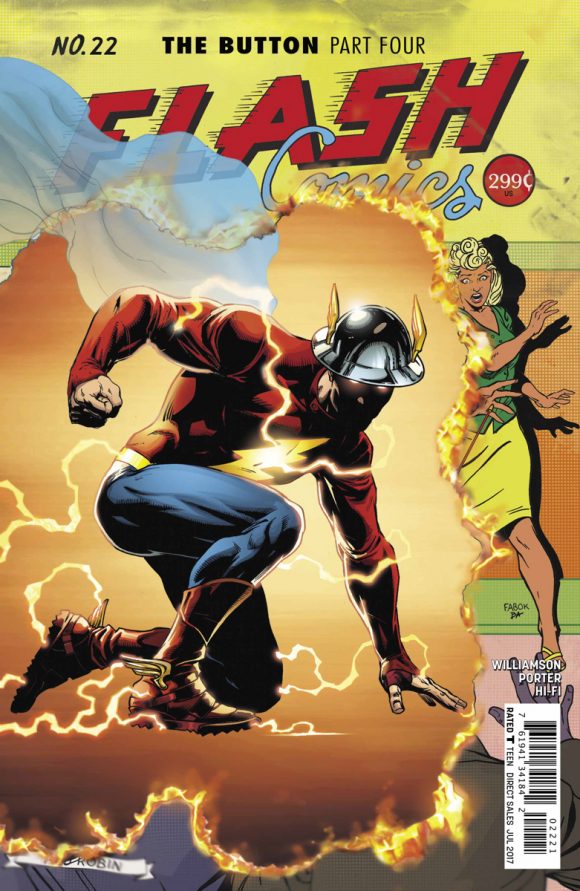 In The Flash #21 (click here), Batman and Flash tore through spacetime and their travels suggested that the classic, Silver/Bronze Age Earth-One was again canon, perhaps transformed into the world that exists now. That’s always been kind of true anyway, at least in a meta way, but this seemed to say that “it all happened” and that mayyyybe some version of Hypertime was back in play.

Here are the money panels: 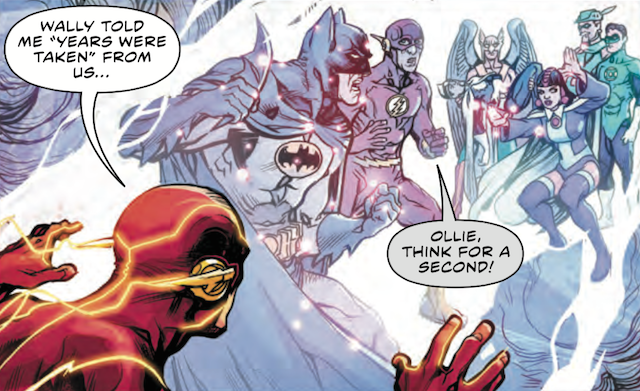 Except, not so fast.

As quickly as the door was opened, it seemed to be shut again in The Flash #22 (both were scripted by Joshua Williamson):

Then again, the Flash isn’t exactly correct. That voice Bruce is hearing is Jay Garrick, not a vision. And Bruce himself points out in the next panel that they’d just met his father, the Batman of the world of Flashpoint.

Just as intriguingly, when Jay does arrive, he soon vanishes in (ahem) a flash. Of course, he’ll be back — and doubtlessly with the rest of the JSA in tow.

So where does all this leave us?

In flux — with twists and teases that ask more questions than they answer.

But that’s cool. There’s so much more to come and there’s tons still to be revealed and explained well into the fall and next year — not to mention this summer’s Dark Nights/Days/Metal event.

Consider some of the major changes going on in the DCU right now, even if you took Watchmen itself out of the equation: The return of the original Jay Garrick and, presumably, the JSA. The reconstituted Titans teams, with Donna Troy and the original Wally West back in action (while still keeping relative newbies Damian Wayne and new Wally West front and center). The re-revamping of Wonder Woman’s origin. The return of pre-Flashpoint Superman — and the way he subsumed his successor.

It’s like DC is vigorously brushing its teeth to get rid of that New 52 aftertaste.

Nevertheless, I liked the New 52 because I thought it took courage and I think publishers need to reinvent themselves periodically. But there was too much good thrown out, too much of what makes DC what it is.

Now, as it moves forward, the publisher is willing to look back in a way that Silver and Bronze Age fans would appreciate.

It’s really the best of both worlds, which is fitting when you’re talking about a Multiverse.