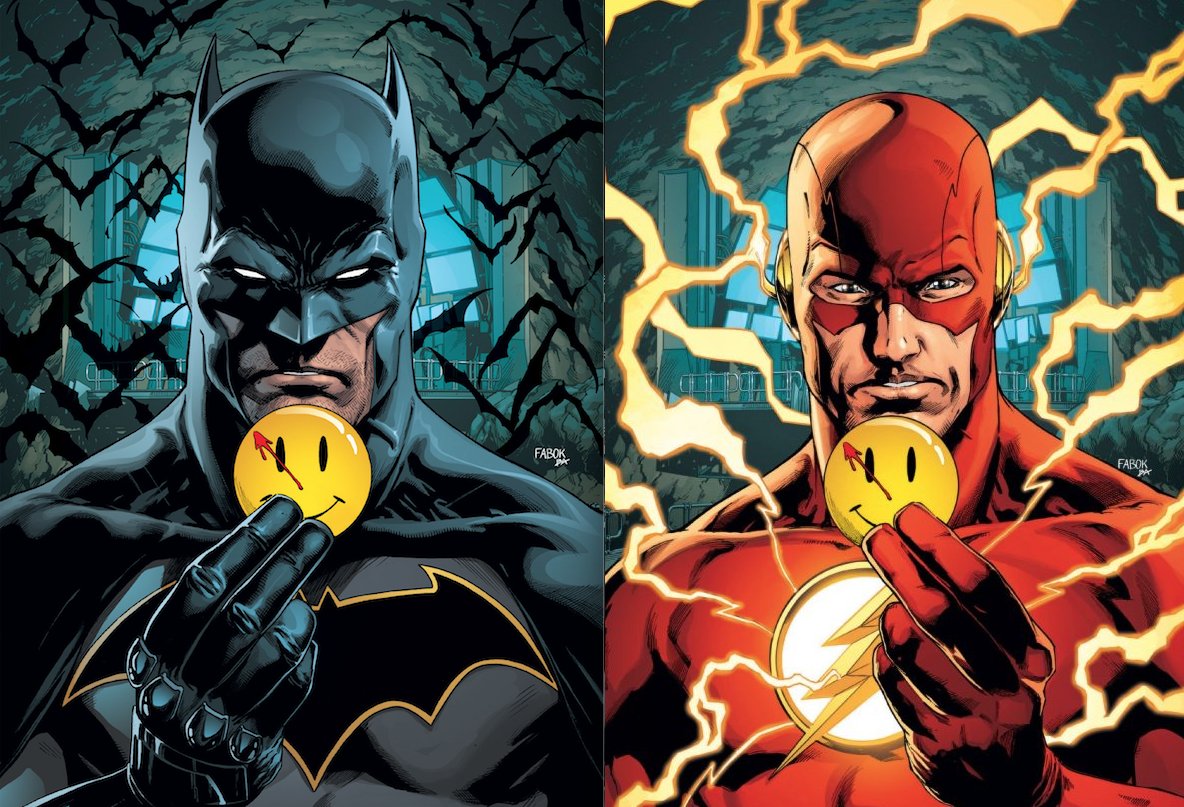 UPDATED 5/15/17: DC has announced Doomsday Clock, the long-anticipated — and, for many, long-dreaded – Watchmen Meets the DC Universe event. (Click here for the details.) Written by Geoff Johns with art by Gary Frank and Brad Anderson, the series debuts in November. Not everybody’s crazy about the idea but I’m cool with it – so much so that I’ve put together 13 Reasons It’s OK That WATCHMEN and the DC UNIVERSE Will Collide. I first posted this in January when The Button, which ends this week, was announced, but obviously it’s timely again.

The other day, DC announced The Button, a four-part crossover coming in April in Batman and The Flash. It’s the first concrete step toward the forthcoming DC Universe vs. Watchmen event since the DC Universe Rebirth one-shot last spring.

Sure, clues have been sprinkled throughout the publishing line since then but this is the first time DC has taken a big beacon and said, “Here. Read this. This is a big deal. This is going to set up a lot of things for what will be an even bigger deal.”

And yes, a crossover between the regular DC Universe and the Watchmen universe is an even bigger deal. I’d even say it could be the biggest deal since Crisis on Infinite Earths.

But just because DC can do it, should they?

1. Where is it written that Watchmen has to stay in its own world? Yes, it’s a contained story in a contained universe, but what’s the harm in messing around a bit and playing a big game of cosmic “What If?” Because…

2. …the original Watchmen book will not change. It will always be there, untouched. You can choose to ignore what will almost certainly be a three-ring circus and still value what is one of the two most influential, greatest works in mainstream comics history. (The Dark Knight Returns is the other.) 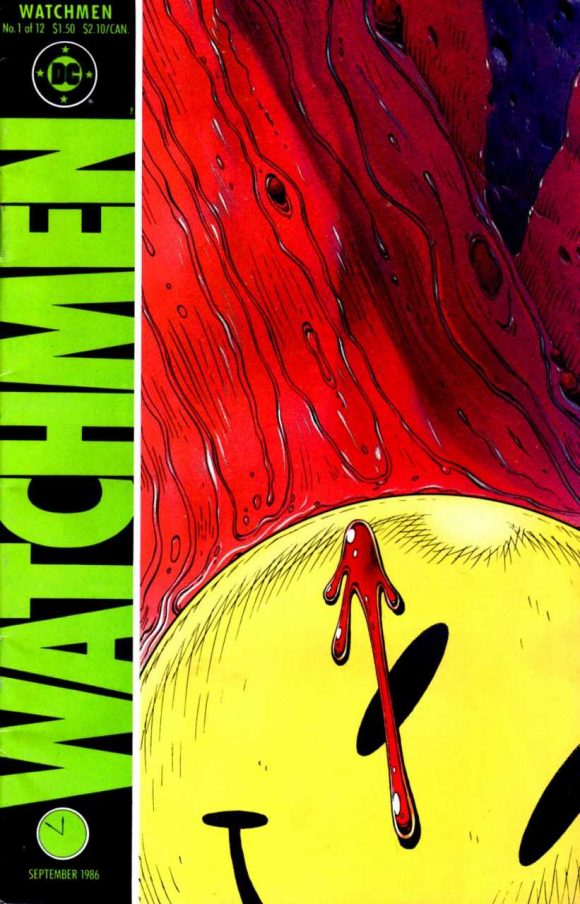 3. Now would I want the Watchmen characters to stick around after an event like this? No, not really. They were designed as riffs on Charlton and DC characters. Keeping them around would only make them redundant.

4. I categorically reject any notion by Alan Moore (or anyone else) that, on principal, these characters should be left alone. Moore has made some petulant remarks in the past criticizing DC for basing new stories on his old ideas. I suppose Moore forgot that he didn’t create Superman, the Green Lantern Corps, Batman and the Joker — all characters he himself cashed a paycheck to write.

5. Besides, Moore has built much of his career on the works of others. What is The League of Extraordinary Gentlemen? What is Lost Girls? Hell, what is Watchmen? Each of those popular works are jammed with characters and ideas first created by others, including Jules Verne, Bram Stoker, Robert Louis Stevenson, Herman Melville, Lewis Carroll, L. Frank Baum and many others. Oh, and Steve Ditko, a comics creator who has his own beefs about poor treatment by the comics industry. 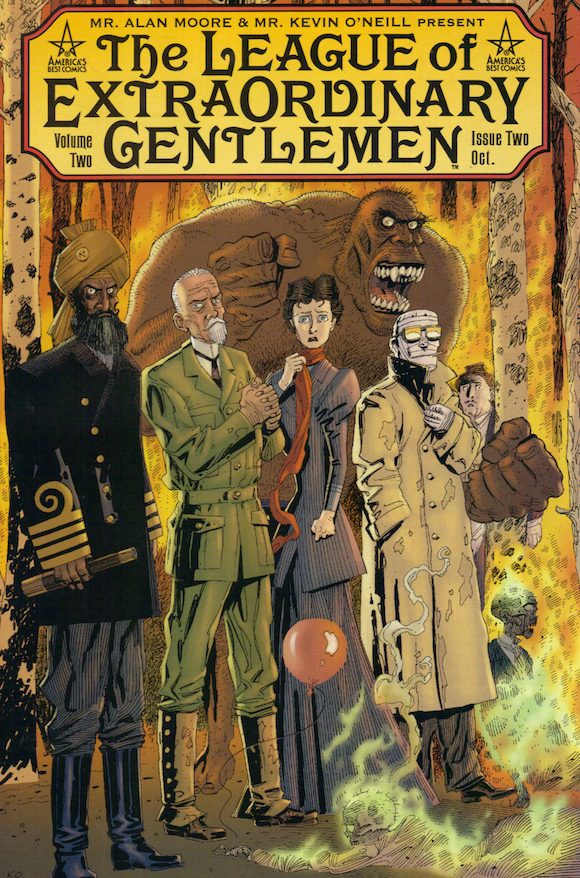 6. For example, Moore told The New York Times in 2012, when Before Watchmen was announced: “As far as I know, there weren’t that many prequels or sequels to Moby-Dick.” Um, wasn’t Ishmael in The League of Extraordinary Gentlemen?

7. At the same time, it just goes to show that a talented creator can do great things with the inventions of others. I mean, that’s the foundation of Big Two comics, isn’t it? I didn’t read all of Before Watchmen because a lot of it didn’t interest me. But the Silk Spectre miniseries was one of the best things that Darwyn Cooke and Amanda Conner ever did — and that’s saying something. 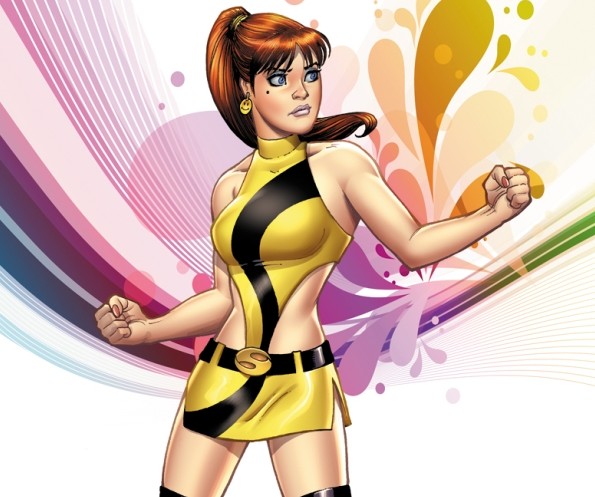 8. The Multiversity: Pax Americana, by Grant Morrison and Frank Quitely, was another example of what top-flight talent can bring to the Watchmen concepts.

9. Which brings us to who will handle this inevitable juggernaut. I’m sure DC/Watchmen will have a main story and a bunch of tie-ins, one-shots and minis. Geoff Johns will almost certainly be the one running this show. Johns is not an Alan Moore in technique or execution but I like him as a storyteller and he certainly respects DC history.

10. Still, DC will only open itself up to further criticism if the various pieces are handled by journeyman writers and artists. As with Before Watchmen, only DC’s best should be involved in this.

11. One last thing on Moore: I never saw the contract he signed with DC for Watchmen. Chances are, you haven’t either. It’s very easy to Monday-morning quarterback a deal you’ve never seen. I’m no fan of Big Corporate Anything but it takes two sides to sign a contract — and Moore was 33 years old when Watchmen first came out. He was no callow youth. He just couldn’t see the future. 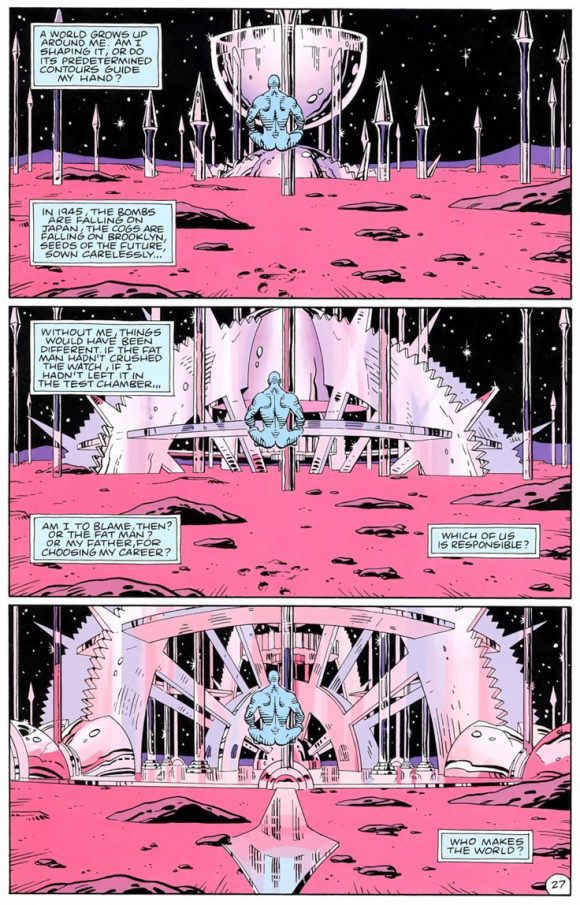 12. I stopped caring about such things a long time ago but if you’re a stickler for DC continuity, Dr. Manhattan’s ability to bend time and space is the perfect solution to cleaning up inconsistencies big and small. Hell, it’s better than Superboy-Prime punching a reality wall in Infinite Crisis. 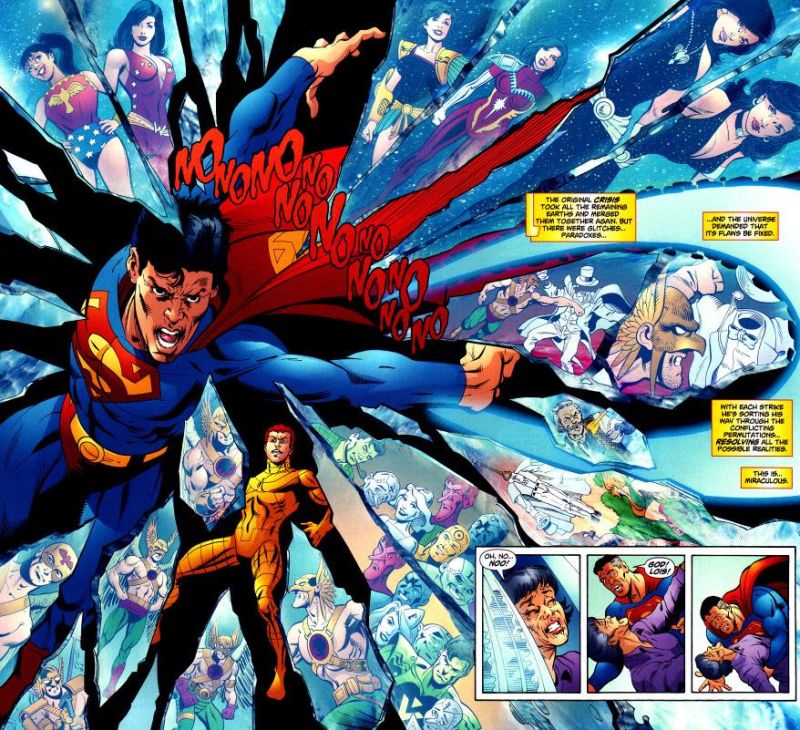