THE PIT AND THE PENDULUM: From Vincent Price to Marvel Comics

Home » COMICS HISTORY » THE PIT AND THE PENDULUM: From Vincent Price to Marvel Comics

It’s that time again, when REEL RETRO CINEMA jumps back to an era in horror cinema before masked slashers, chainsaw-wielding cannibals and pea soup-spewing devil children. It was a simpler time, when spooky castles, black cats and dusty skeletons were enough to send shivers down the spines of moviegoers.

We’ve previously covered Roger Corman’s adaptations of The Raven (click here), The Masque of the Red Death (click here), and Tomb of Ligeia (click here), so strap in and get ready to revisit the second of Corman’s “Poe Cycle” — 1961’s The Pit and the Pendulum starring (of course) Vincent Price, John Kerr, and the magnetic Barbara Steele. The screenplay was by the legendary Richard Matheson who, let’s say, took a loose approach when it came to adapting the source material. 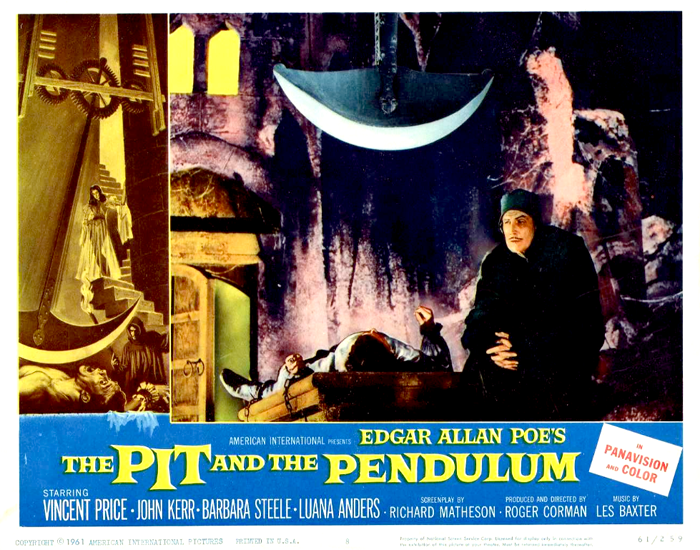 The film opens with Englishman Francis Barnard (Kerr) making a lonely trip to the castle owned by his brother-in-law Nicholas Medina (Price) to find out what happened to his sister Elizabeth (Steele), who died unexpectedly. Nicholas and his younger sister Catherine (Luana Anders) offer vague details about a rare blood disorder, but something seems amiss so Barnard declares he is staying until he can get to the bottom of the mystery.

The story only grows more baffling when his sister’s physician, Dr. Leon (Antony Carbone) explains that Elizabeth “died of fright.” Demanding to know just where in the castle this happened, Nicholas takes Francis down into dusty, dark catacombs that house nothing less than a series of torture chambers. Nicholas says Elizabeth became obsessed with the devices, eventually locking herself into an iron maiden. Francis doesn’t buy any of it.

Catherine explains to Francis (there’s a lot of explaining in this movie)  that when Nicholas was a child, he saw his father—once an apparatchik of the Spanish Inquisition—murder and torture his wife and brother, claiming they were having an affair behind his back. As you might guess, this left a lasting impression on Nicholas, who has been a bit squirrelly ever since.

After that, even more mysterious things start happening. Elizabeth’s room is ransacked, her portrait slashed. Her beloved harpsichord plays in the middle of the night, and one of her rings is found on the keyboard. Worried that Elizabeth was given a premature burial; they exhume her corpse and see that the body looks as though it was trying to claw its way out of its coffin. Upon seeing this, Nicholas faints.

That night, Elizabeth seems to rise from her grave and pursues Nicholas, who falls down a flight of stairs. Dr. Leon meets her down in the catacombs, and we learn what’s really going on: This whole thing was a set-up between the two of them to drive Nicholas mad so they could inherit his castle and fortune. Elizabeth begins to taunt Nicholas, who has lost his already loose grip on reality. Believing he is his own father and Elizabeth and Dr. Leon are his libidinous mother and uncle, Nicholas kills Leon and promises to torture Elizabeth to death.

Francis hears all this commotion and heads down, where Nicholas, whose cheese has irrevocably slipped off its cracker, now thinks Francis is his uncle and straps him to the thing we’ve all been waiting to see in action—the pendulum! As the massive steel blade swings back and forth, coming ever closer to turning Francis into pulp, Nicholas grabs Elizabeth, gags her, and puts her in the iron maiden. Catherine and one of the servants arrive; a scuffle ensues, leading to Nicholas falling to his death. They stop the pendulum, just microns away from cutting Francis in two. As they slam the heavy metal door to the chamber shut, they vow no one will ever enter this house of horrors again. The film ends on the startled eyes of the helpless Elizabeth, entombed forever in the iron maiden. The end.

A few paragraphs ago I used the term “loose” when describing how much Richard Matheson’s screenplay matched Edgar Allen Poe’s original story. That’s me being loose with the word loose, because Matheson’s story is entirely his creation, the only connective tissue being the scene at the end where a man is strapped to a table under a giant, lethal pendulum, and even then, the context is entirely different. The whole Scooby-Doo-esque plot was crafted to make The Pit and The Pendulum an actual feature-length movie, since the original story only runs about 15 pages.

That aside, there’s a lot to like about Roger Corman’s The Pit and the Pendulum. Vincent Price, of course, could play the haunted madman type in his sleep, and he always looks at home running around creepy corridors and dusty tombs. Barbara Steele is, well, Barbara Steele, possessor of the one of the most captivating faces in all of cinema. The scene where her “corpse” arises from her coffin has a real ghoulish kick, and would go on to become inspiration to a great number of horror filmmakers just coming around the bend. 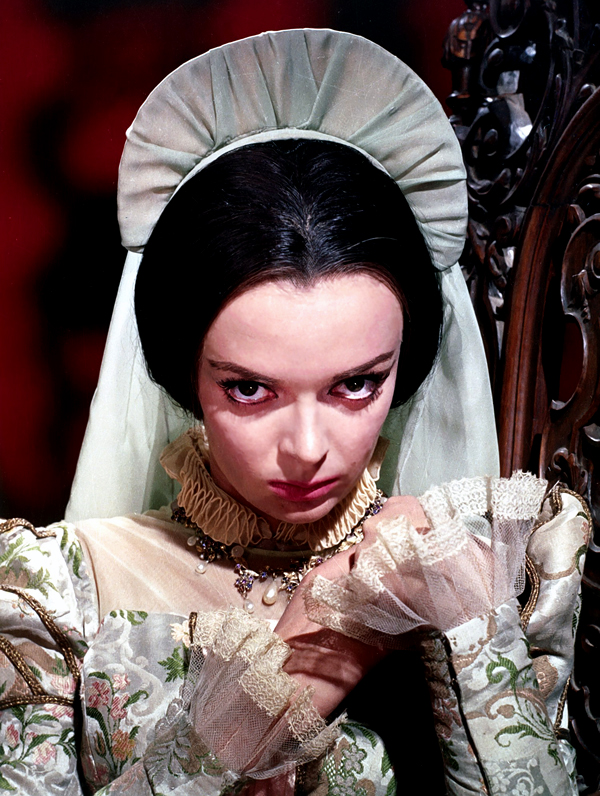 The flashback sequences are probably the highlight of the movie; shot in a series of hazy, monochromatic filters, they keep you off guard since you never really know whether what you’re seeing is real, or merely the fevered imagination of the teller. And the final shot—a close-up of Steele’s terrified eyes—is a great, nasty way to end a nasty story.

My main issue with the film is the final set piece, where we finally get to see someone under the giant pendulum. It takes a way too long to get there, and the possible victim—Francis Barnard—is so peripheral to the story that I don’t feel like there’s a lot of drama as to whether he gets it or not. Francis is strapped to the table because Nicholas has gone mad and believes he is someone else, not because he wants to get revenge. I think it would have had more dramatic heft if Price had grabbed his wife or the doctor—the two people in on the plot to drive him mad—rather than this rather ancillary character.

Still, at a brisk 85 or so minutes, The Pit and the Pendulum moves at a pace and delivers enough old-timey scares to make it a fun watch, especially during the Halloween season. 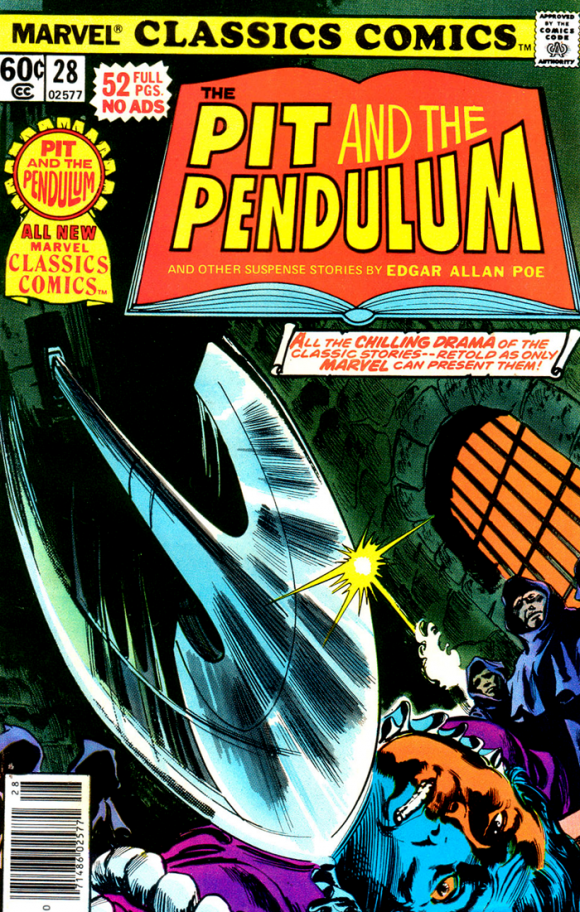 Being faithful to the original Poe source material was not an issue for Marvel Comics, which published the story as part of their Marvel Classics Comics series of literary adaptations that ran from 1976 to 1978.

While The Pit and the Pendulum gets top billing, MCC #28 chose to feature several Poe short stories, allowing their version of Pit to more closely hew to the original. This version, adapted by writer Don McGregor, goes right for the throat — er, stomach — showing us a man going mad as he endures false imprisonment and torture during the Spanish Inquisition. He imagines his tormentors as hideous, worm-infested demons, and has to watch helplessly as a legion of rats swarm his body. 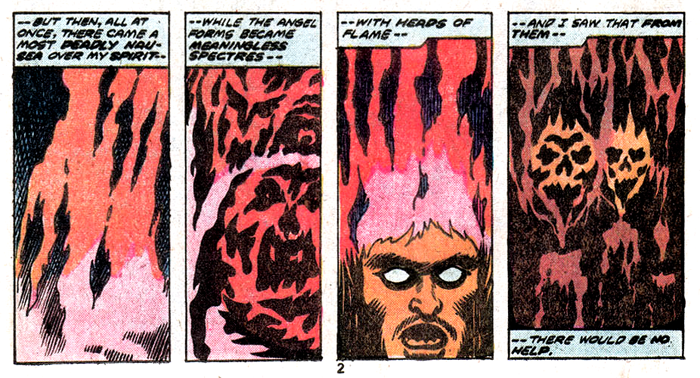 Artist Rudy Mesina gives the reader full-page shots of the rats, leaving nothing to the imagination, conveying every gruesome detail. Playing with the page layouts, the art keeps us off-kilter as we watch this poor soul escape death at the last second and seemingly wander through Hell itself, only to find deliverance thanks to the French Army, whose occupation helped end the Inquisition. 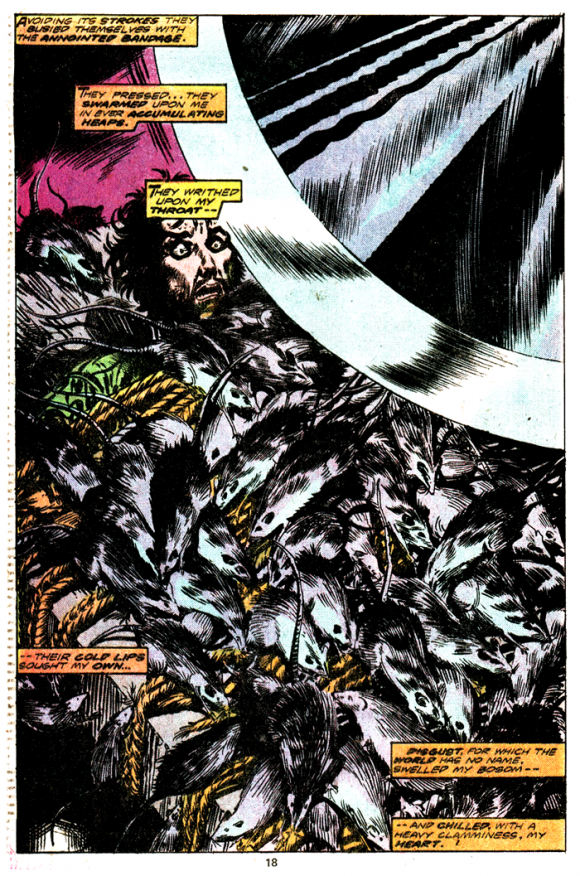 In addition to adaptations of The Tell-Tale Heart and The Cask of Amontillado (featuring an early art job by fan-favorite Michael Golden), Marvel Classic Comics #28 sports a wonderfully moody cover by Gene Colan and Tom Palmer, making for quite an attractive package. If you were trying to introduce a comic-book fan to the macabre work of Edgar Allan Poe, this book would probably be a great place to start.

Even though Dell Comics published a number of adaptations of Roger Corman’s “Poe Cycle” of films, they didn’t tackle this one, and as far as I’ve been able to determine, no one has ever adapted The Pit and the Pendulum film into comic-book form. That’s a shame, because this film has a lot more material for comic-book artists to sink their teeth into, unlike more placid tales like Tomb of Ligeia and The Raven.

Despite its flaws, Pit delivers a lot of good old-fashioned chills, thrills, laughs, and people trapped forever inside torture devices.

What more could you want for Halloween?