Again with the Edgar Allan Poe… 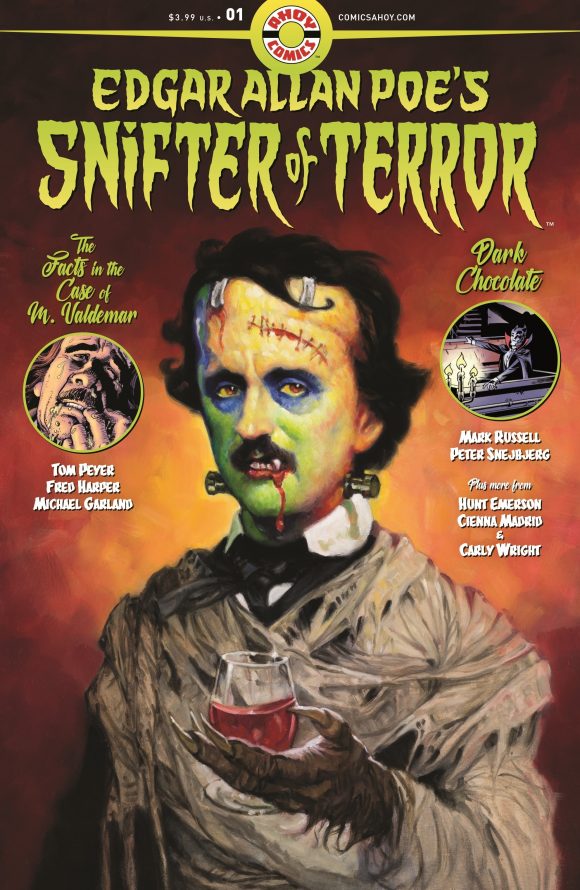 Boy, we just can’t get enough of Edgar Allan Poe around these parts. We’ve had Rob Kelly’s REEL RETRO CINEMA column on The Pit and the Pendulum (click here) and we’ve had Lisa Carmack’s take on 13 often wacky Poe film adaptations (click here).

Capping it off is Tom Peyer, whose AHOY Comics is debuting Edgar Allan Poe’s Snifter of Terror on Halloween. (That’s Wednesday, by the by.)

Here’s how the AHOY folks describe the irreverent horror title: “Famous author/day drunk EDGAR ALLAN POE introduces tales of suspense, shock, & disgust! Some are adapted from his own stories, others from his fellow dwellers in the public domain. All are presented in vile and lurid comics form! Meeting Poe as equals, we don’t merely adapt the classic horror tales of the Victorian era; ​we improve them, using more dynamic images, sexier characters, and fresh twists never before gasped at! It’s like Treehouse of Horror crossed with Drunk History crossed with us bottoming out!”

So, here’s Tom with his completely serious, not at all facetious list of the 13 MOST DISTURBING EDGAR ALLAN POE COMICS:

1. The Atom #12, “The Gold-Hunters of ’49!” by Gardner Fox, Gil Kane and Sid Greene, 1964. The Tiny Titan hops the Time Pool back to 1849, where he watches the inventor of the detective story solve a mysterious gold robbery! A respectful portrayal made weird by Poe’s purple-and-red outfit. 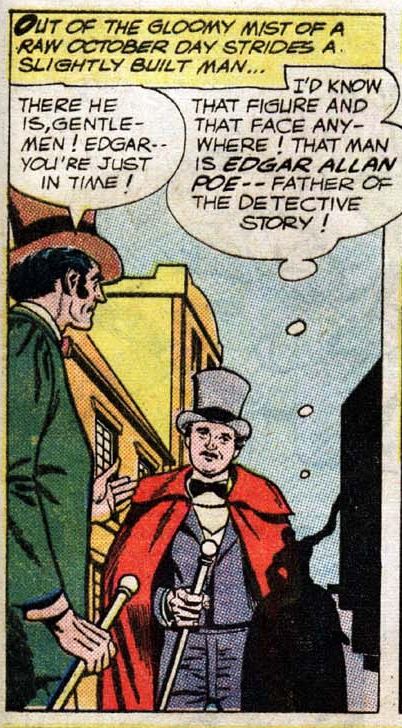 2. Creepy #6, “The Cask of Amontillado,” by Archie Goodwin & Reed Crandall, 1965. You know the Poe story: Montresor lures Fortunato to his creepy wine cellar, where he builds a wall to fatally confine his secretly despised acquaintance. Creepy adds a classic comic book-style twist of justice: Montresor drowns in a flood! Brr-r-r! 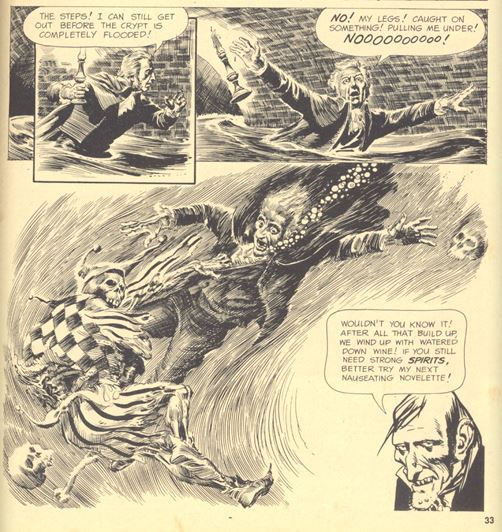 3. Mad Magazine #9, “The Raven” by Harvey Kurtzman and Will Elder, 1954. The chicken fat runs thick as artist Elder slaps increasingly zany panels onto the actual poem. 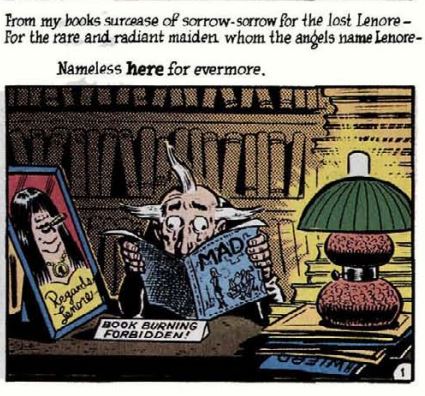 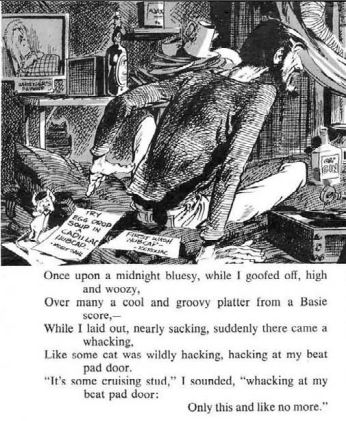 5. First Love Illustrated #1, “Cupid’s Corner,” 1949. The text page in this Harvey comic cherry-picks a verse from one of Poe’s morbid odes to a dead lover and slaps it into a tribute to chaste romance between boys in bow ties and girls in modest skirts. True love waits! 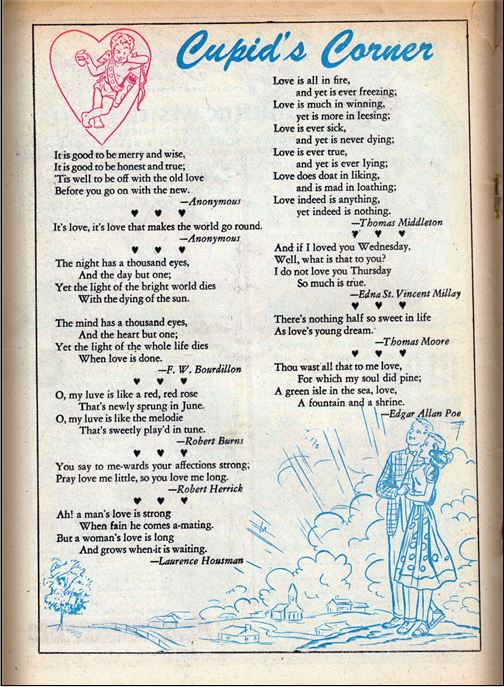 6. Marvel Classics Comics #68, 1977. Worth it for the cover, where Gene Colan and Tom Palmer give The Pit and the Pendulum the dynamic Marvel treatment. (Click here for Rob Kelly’s REEL RETRO CINEMA column on the issue.) 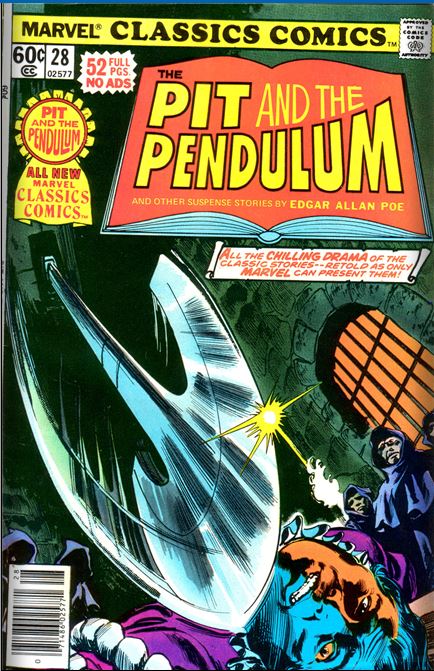 7. Psycho #21, “Edgar Allan Poe’s The Facts in the Case of M. Valdemar,” by Alan Hewetson and Cardona, 1974. The Skywald Publishing Corporation’s Creepy knock-off casts Poe himself as the physician/mesmerist whose treatment leads to one of literature’s grossest climaxes. 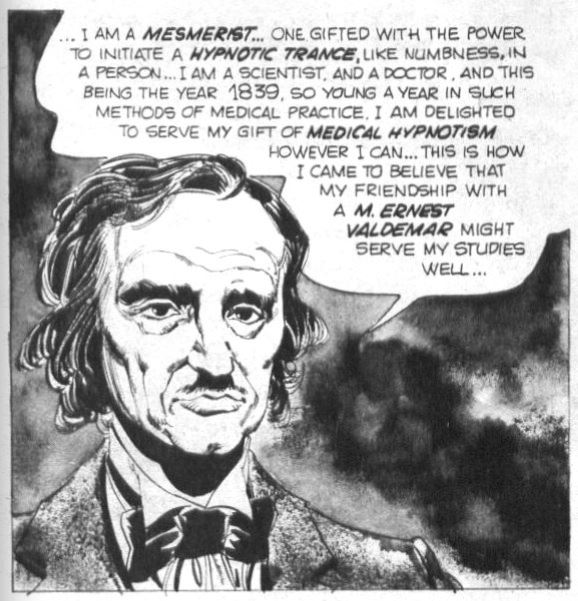 8. Yellowjacket Comics #4, “The Fall of the House of Usher,” Gus Schrotter, 1944. If Edgar Allan Poe says your books are morbid, you might have a problem. 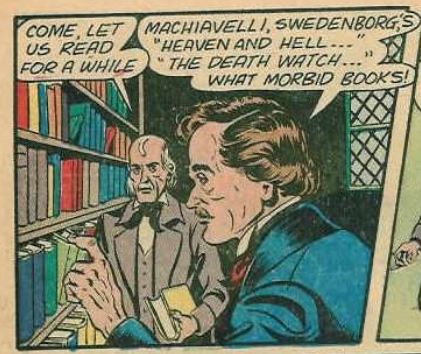 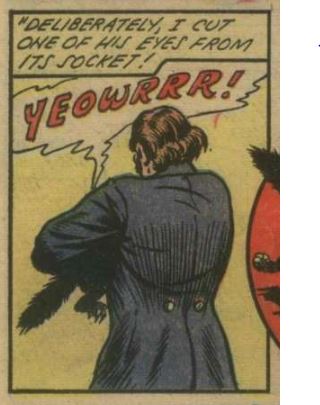 10. Nightmare #12, “The Black Cat,” uncredited, 1953. We have a Black Cat series in Edgar Allan Poe’s Snifter of Terror. Written and drawn by Hunt Emerson, it’s a lot more fun than this. 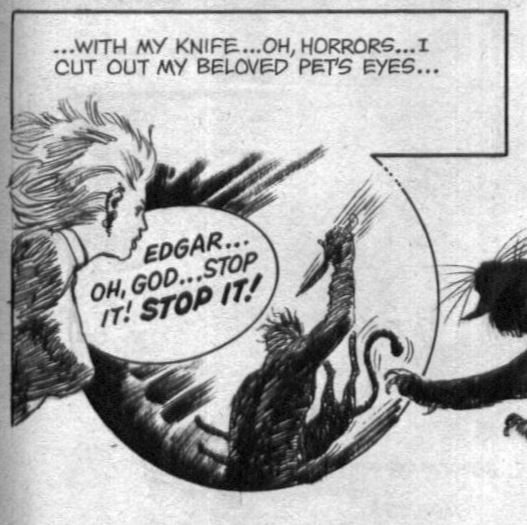 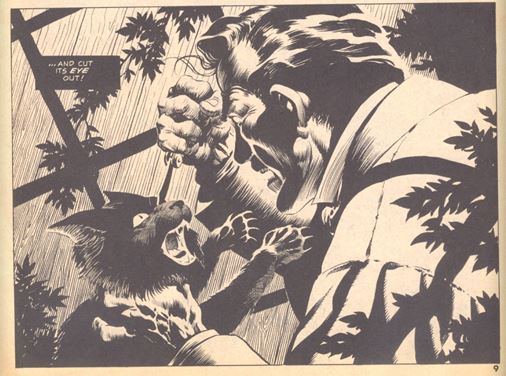 13. The Black Cat #14, Lee Elias, 1948. This is the worst, most unfaithful adaptation of The Black Cat I’ve ever seen. There isn’t even a cat in it, let alone a cat getting its eye stabbed out. I don’t get it at all. The pumpkin guy is scary, though.