It’s BILL FINGER’s birthday: Here’s an accidental discovery that changes what you know about DC and Marvel history.

I started a summer project recently — reading every Batman and Detective in order, starting with 1964’s “New Look.”

For you whippersnappers out there, the “New Look” was a Batman revamp orchestrated by legendary editor Julius Schwartz: Out was the house art style, which had grown woefully stale, and in was a jazzier, more “realistic” artistic approach most notably cultivated by Carmine Infantino. (Such things are relative, of course. Neal Adams completely blew the lid off realistic comics art a few years later.)

The changeover happened in Detective Comics #327 and Batman #164: The bulky, bubble-topped Batmobile was mothballed and replaced by a sleek convertible; a “hot-line” with Commissioner Gordon was installed in the Batcave; Bruce and Dick used an elevator to reach the Batcave instead of the long staircase; and Batman’s own chest emblem was now encircled in yellow. 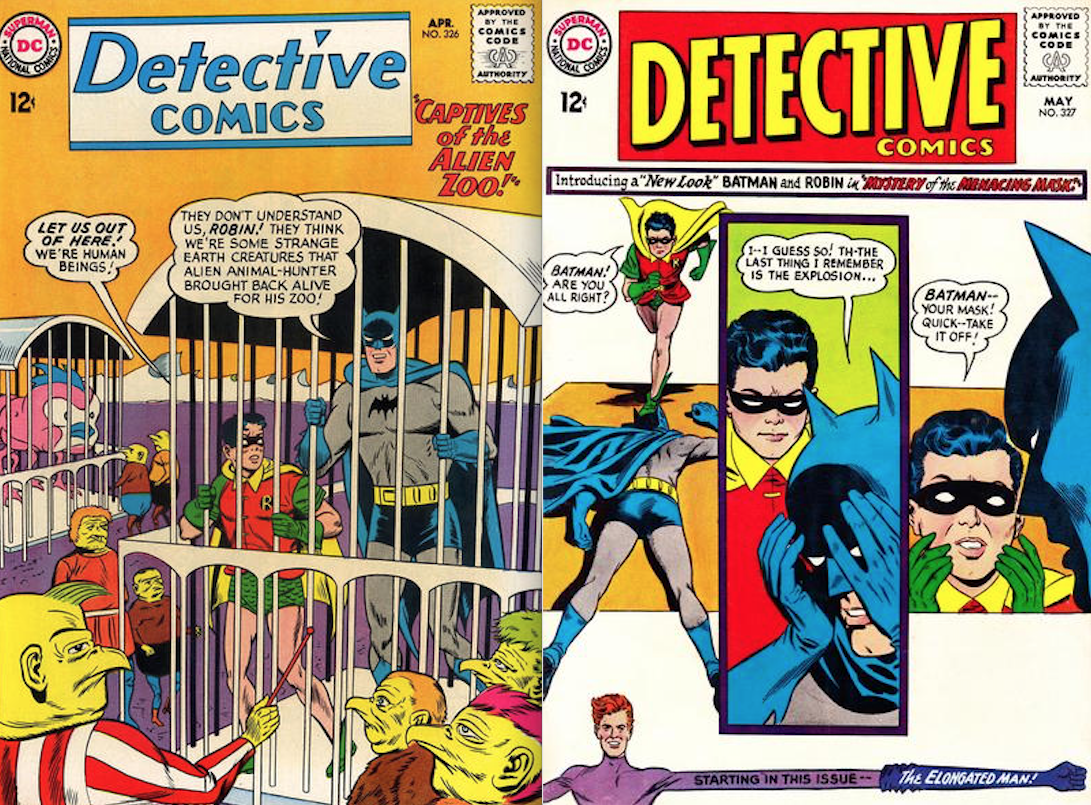 Most importantly, though, Schwartz and writers like Batman co-creator Bill Finger, Gardner Fox, John Broome and France “Eddie” Herron dumped the silly aliens and monsters that were plaguing the titles, in favor of a return to gangsters and detective work. Sure, there were the still-welcome costumed villains and high-concept gadgetry, but Batman was now earthbound, metaphorically and literally. 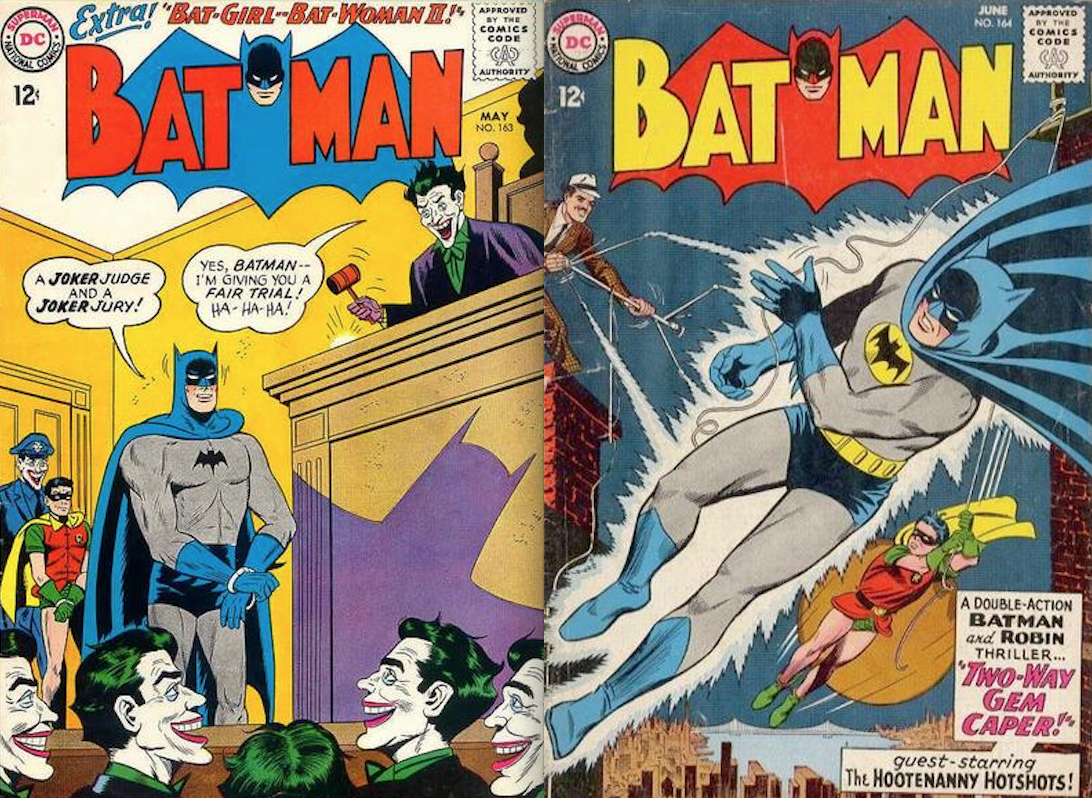 I read all these issues many years ago but forgot so many of the details that it seemed like a good thing to do to recharge the batteries. And besides, I figured, maybe I’d get a column idea or two out of it.

So, I’m sitting on the couch the other night and I crack open Batman #167, which was cover-dated Nov. 1964. It’s a full-length story called Zero Hour for Earth!, written by Finger with pencils by Sheldon Moldoff (ghosting for Bob Kane) and inks by Joe Giella. 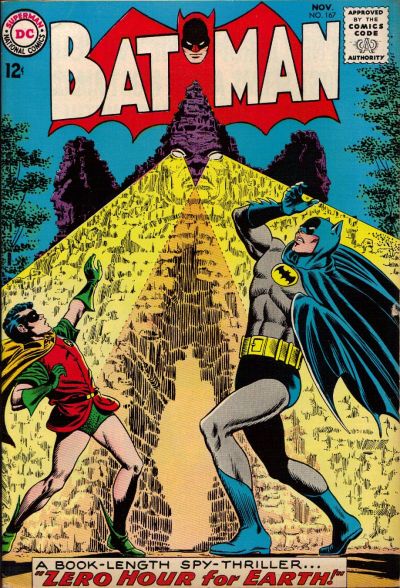 And right there on the opening splash page, we see Batman’s latest villains — a shadowy international organization called … Hydra. 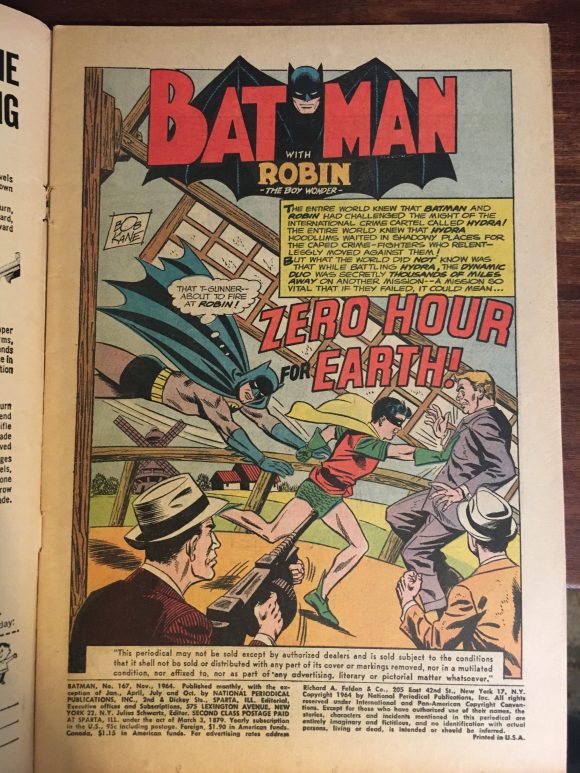 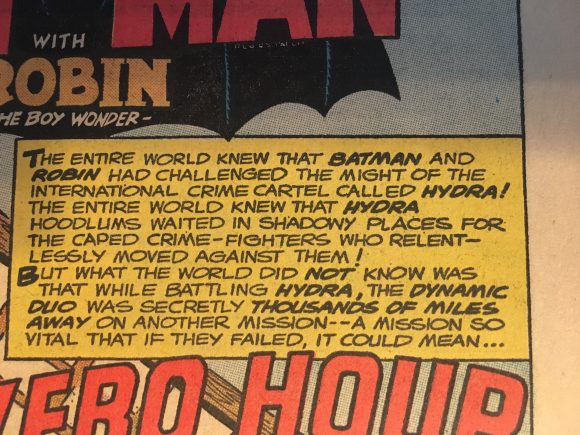 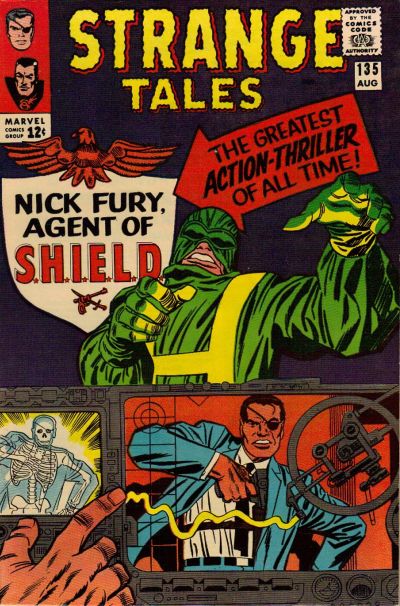 Finger’s use of the name is no accident, either. As Commissioner Gordon explains, the organization “calls itself Hydra, after the fabled monster which grew a new head every time one head was lopped off.” 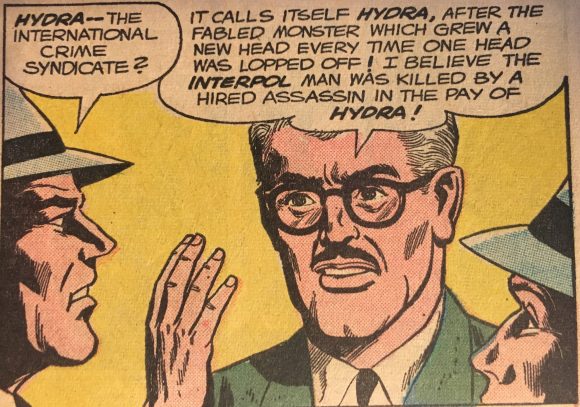 And before you jump in with your correction, reader Edward Pachico pointed out later in Issue #170 that “the hydra grew two heads instead of one.” Editor Schwartz even commended Pachico for being the only reader to catch the mistake. 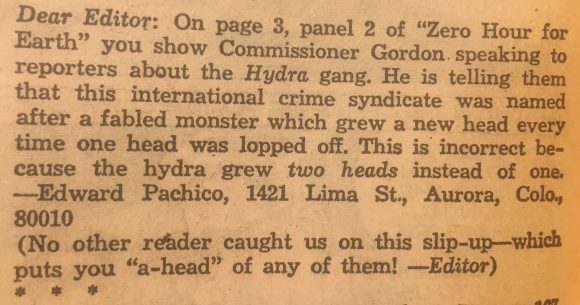 Regardless, the same Bill Finger who built Batman from the ground up from Bob Kane’s original idea — getting jobbed in the process — also created the concept of Marvel’s most nefarious organization, the one at the heart of its movie and TV universes and central to the publisher’s current big summer event.

(Oh, and for those keeping Bat-score, Kane’s Batman idea was a guy in a domino mask and red leotard with batwings. Finger gave us a Batman in dark hues, with cape and cowl, wrote the first Batman script in Detective Comics #27 and the scripts for Batman #1. He also had a major hand in creating Robin, the Joker, Penguin, Catwoman, the Riddler, Two-Face, the Scarecrow, the Red Hood, the original Bat-Girl, the Batmobile, the Batcave and the names Bruce Wayne and Gotham City. That’s not even a complete list.)

Now, I have no idea whether Stan Lee and/or Jack Kirby read Batman #167 and the letter that followed and decided to lift the idea. It’s certainly in the realm of possibility. (Any of you readers with intel, please pass it along.) It’s no secret that DC and Marvel paid a lot of attention to each other then as they do now.

Still, as was often the case at the time, Marvel’s braintrust was developing ideas and concepts that were more fully formed and in some very tangible ways more enduring than what DC was producing during that period. So it may be that Marvel’s Hydra sprung coincidentally from the publisher’s extraordinary wellspring of creativity as the company blossomed in the ’60s. 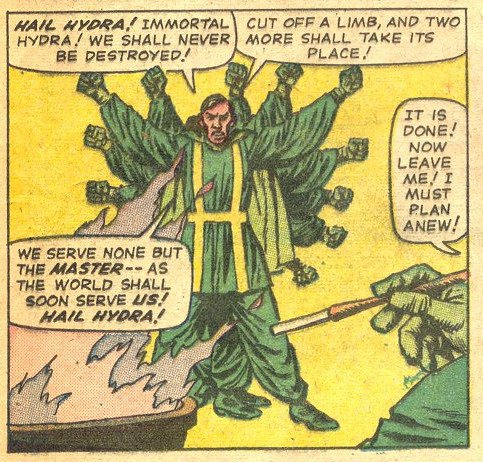 Either way, I have no recollection of Batman ever battling Hydra again, though the end of #167 leaves the door open. (And I’m only up to Batman #171 as I re-read these issues.) It could be that everyone at DC, including Finger, forgot about it as soon as the issue went to press. Or maybe once Marvel went ahead with its version, DC just went its way. Regardless, there’s very little to be found online about this unusual chapter in the Caped Crusader’s history, other than scattered notations here and there.

But it would be unfair to accuse the House of Ideas of stealing one from the Distinguished Competition without acknowledging that Finger and DC were aping James Bond, whose screen adventures were enormously popular at just that moment in pop culture: Batman #167 was hitting the stands just around the time Goldfinger — Sean Connery’s third turn as the world’s greatest spy — was making it to theaters. 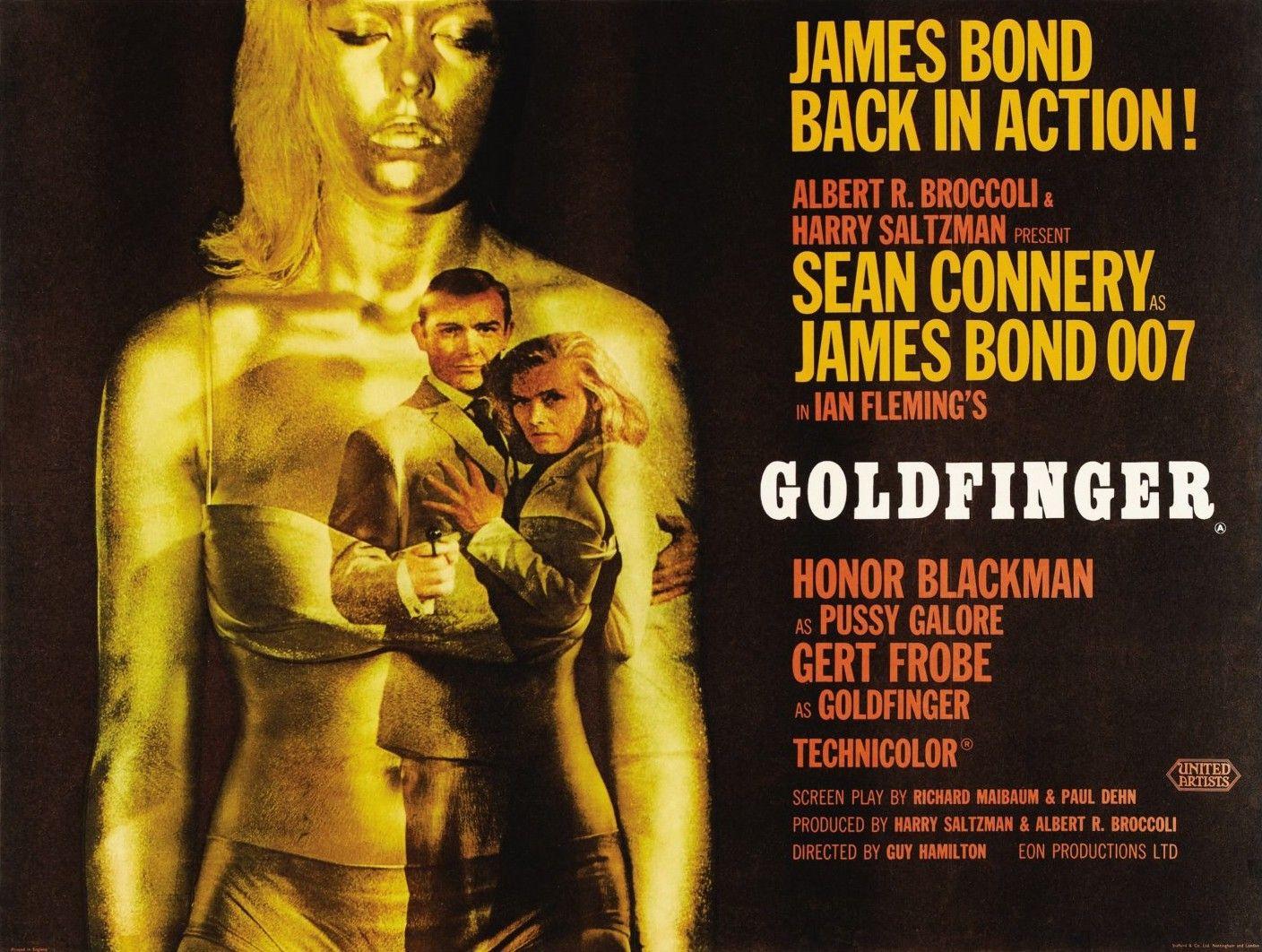 Finger’s version of Hydra may be a criminal gang but it takes its cues from 007’s SPECTRE. There are Hydra heads all over the world and the Dynamic Duo spends the entire issue crisscrossing Europe and Asia more or less playing superhero superspies: They climb the Eiffel Tower, get into a Swiss ski chase and do battle in Holland’s windmills. Bruce even goes undercover in Singapore — white dinner jacket and all — and gets coded information from a comely dancer whose sultry moves mimic semaphore. 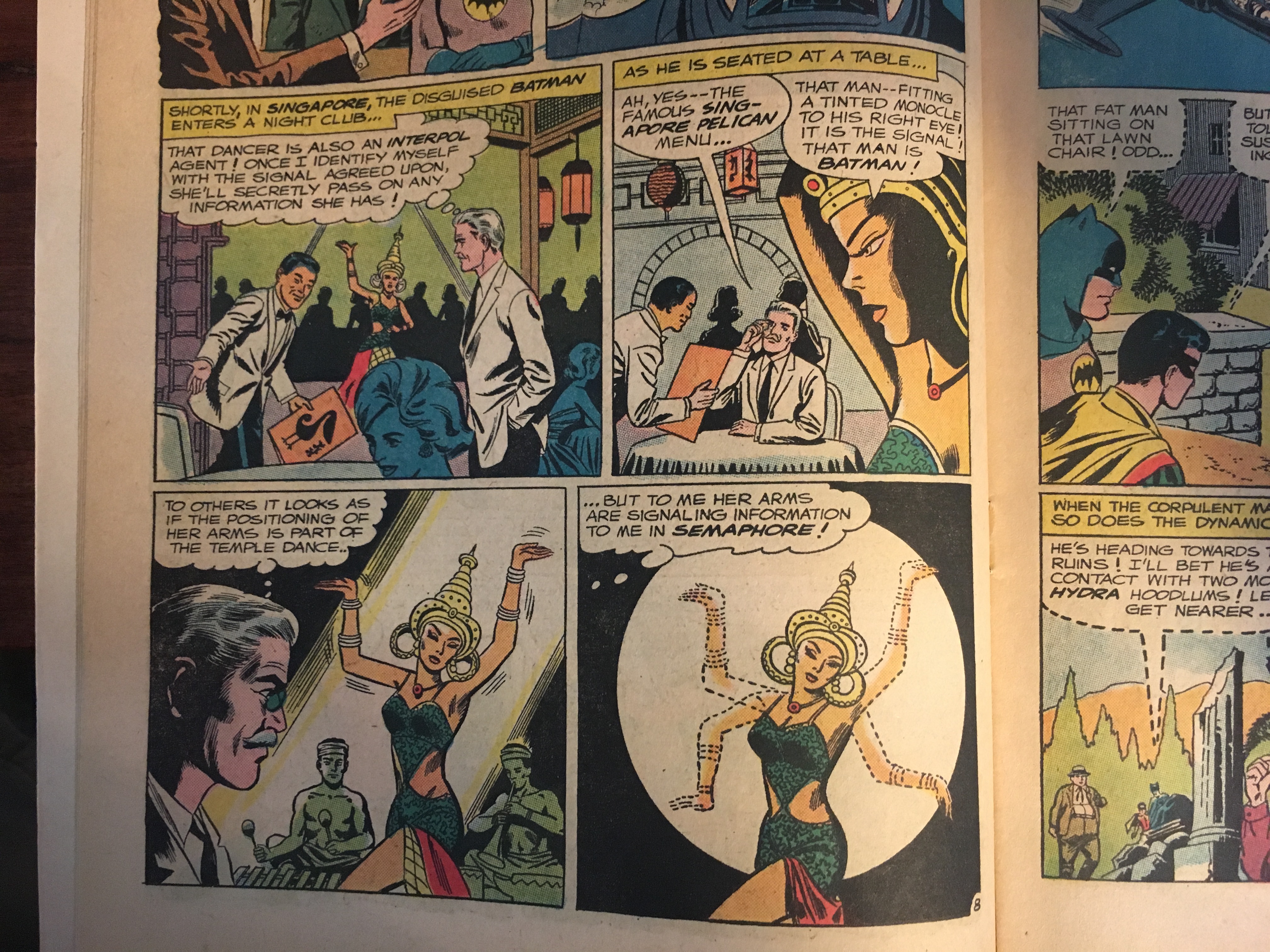 A scene practically ripped from Dr. No.

Of course, less than two years later, Batman would be putting its own colossal stamp on popular culture with the debut of the ABC-TV show in January 1966. The Joker, Riddler, Penguin and Catwoman were introduced or reintroduced to millions of people.

Two generations later, the same would happen to Hydra, thanks to Marvel’s blockbusters.

And now they all have one name in common: Bill Finger.