James Bond is enormously important to me, particularly the films, and I’ve long been frustrated by the relative paucity of action figures and the like.

Compared to, say, Batman and Star Wars, there just hasn’t been much to choose from, all things considered. Much of what’s been produced could be reasonably considered substandard and some of the higher-priced items haven’t really measured up either.

I’m not talking about the original memorabilia that was released in the ’60s when Bond was at his zenith. I’m very happy with my Gilbert miniatures and Corgi Aston Martin, thank you very much.

No, I’m referring to figures that utilize today’s production standards and technology.

Thankfully, the UK’s BIG Chief Studios has stepped into the void with what aims to be fairly comprehensive line of 1/6-scale 007 figures. I first saw them at Toy Fair last year (click here) and in the fall we brought you an EXCLUSIVE behind-the-scenes look at how they were constructed. (Click here. You’ll definitely want to. There are tons of superb photos.)

But those were prototypes; you can’t fully judge figures like this without turning them over in your hands and inspecting them up close. And that’s what we’re going to do here.

The three figures are available now through BIG Chief’s website. They’re on the expensive side at $235 to $250 apiece depending on exchange rates — but worth every penny or pound.

Here’s a figure-by-figure look at each, starting of course with …

The Connery Bond figure is easily the best of the three, with a startlingly accurate likeness. When I opened the well-designed packaging and peeled off the padding protecting his face, I gasped in appreciation. 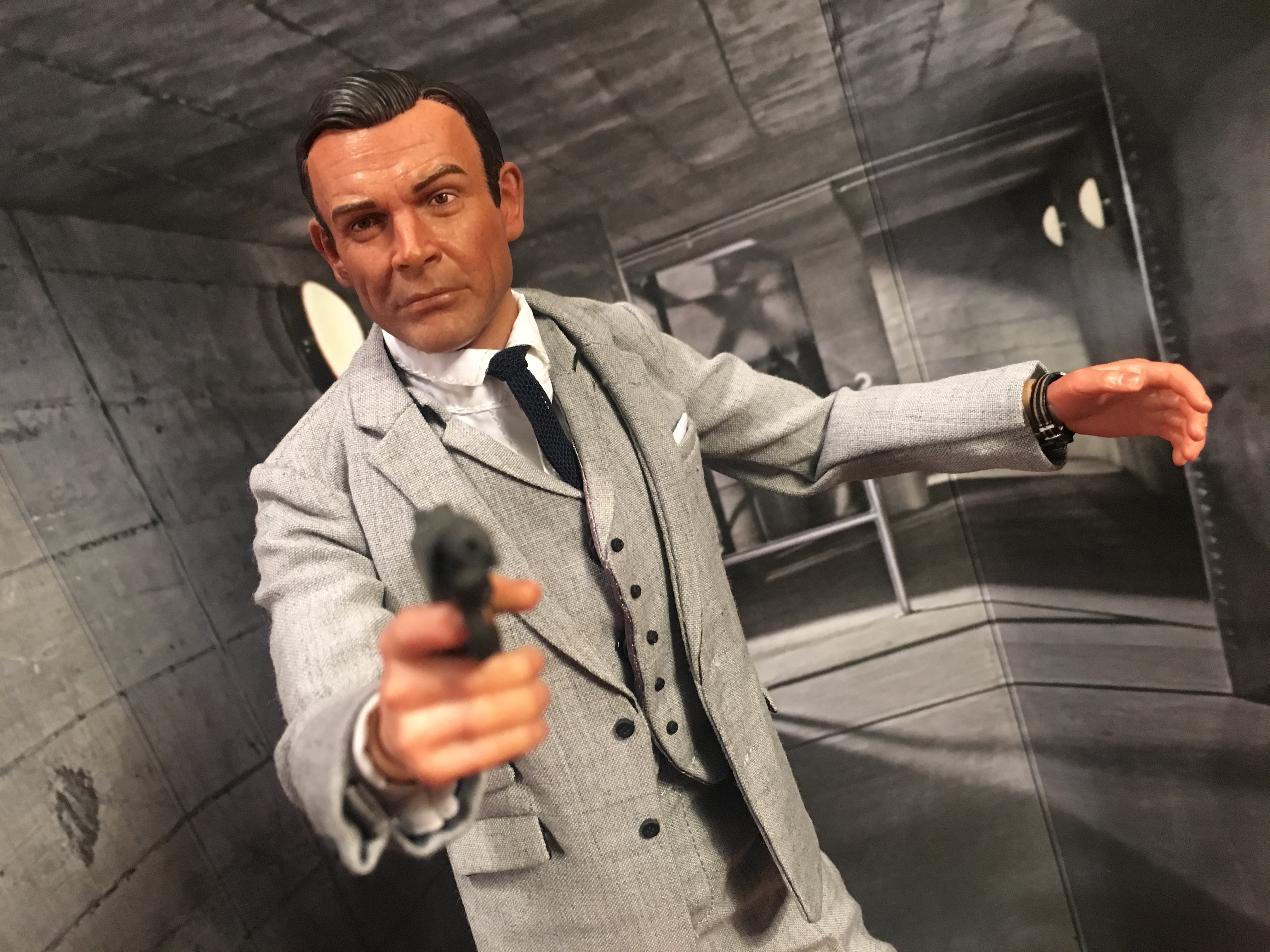 One of the toughest things about a figure like this, however, is the clothes — especially with a character so proud of his Savile Row tailoring. The outfit has to hang right or the illusion is shattered. (There’s a reason that an Imperial Stormtrooper looks better at this scale than most other figures — it’s all plastic and rubber.)

Bond’s classic gray flannel fits just so, with none of the awkward bunching or limited movement you often see at this size. Minor points off, however, for the tie, which appears to be made from a lower quality material. You can manipulate it a bit but it’s not quite up to snuff. 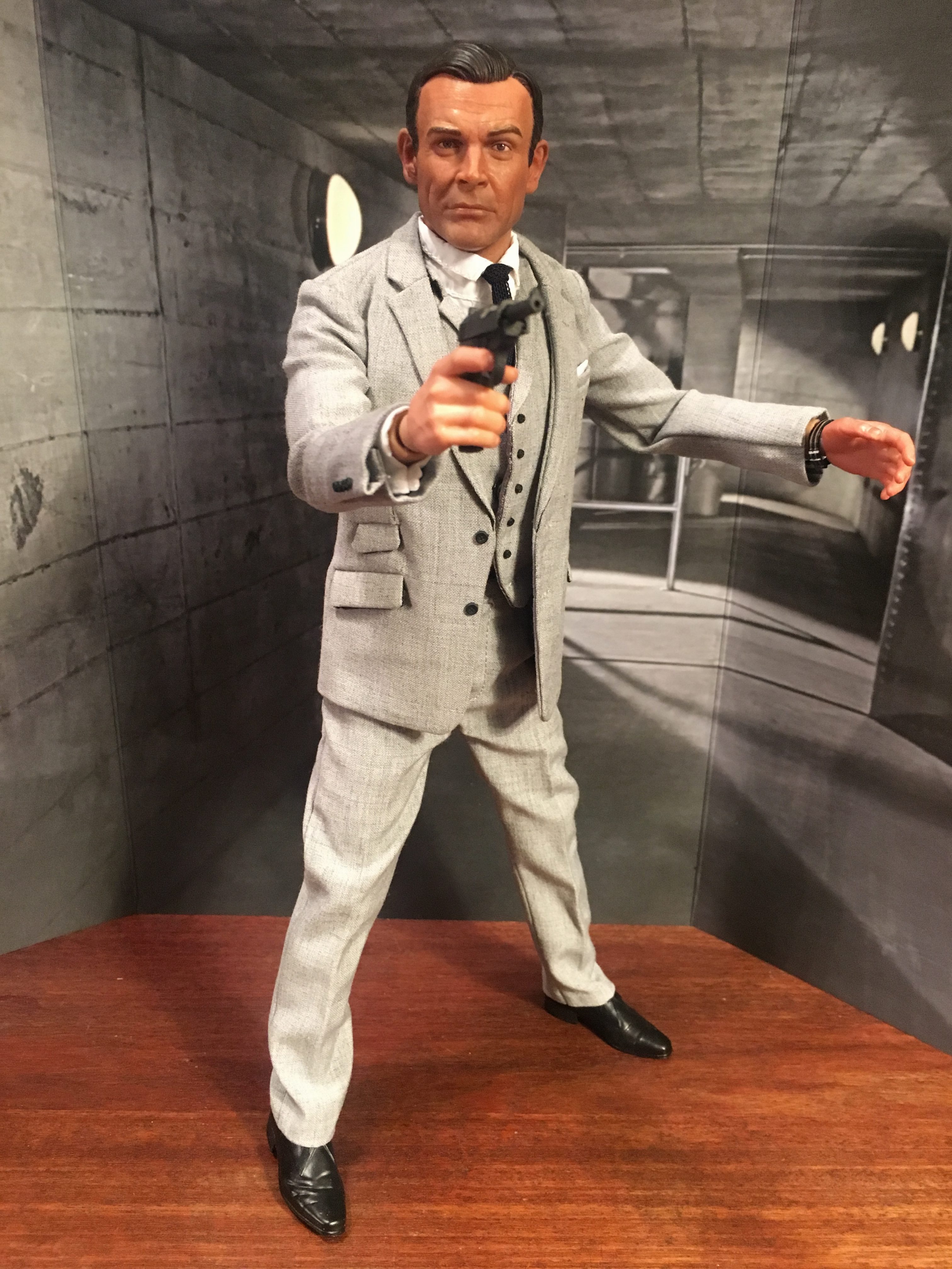 Each of the three 12-inch figures is outfitted with a series of accessories and interchangeable hands, as well as a background display. Bond’s selection includes not one but two sidearms with removable magazines — his classic Walther PPK and a Walther P38, which he also uses in the film; a wristwatch; two gold bullion bars; a secret note and pencil; and two homing devices — a larger one and a smaller one that not only fits into a hidden compartment in the heel of his shoe but also into the larger gadget itself. 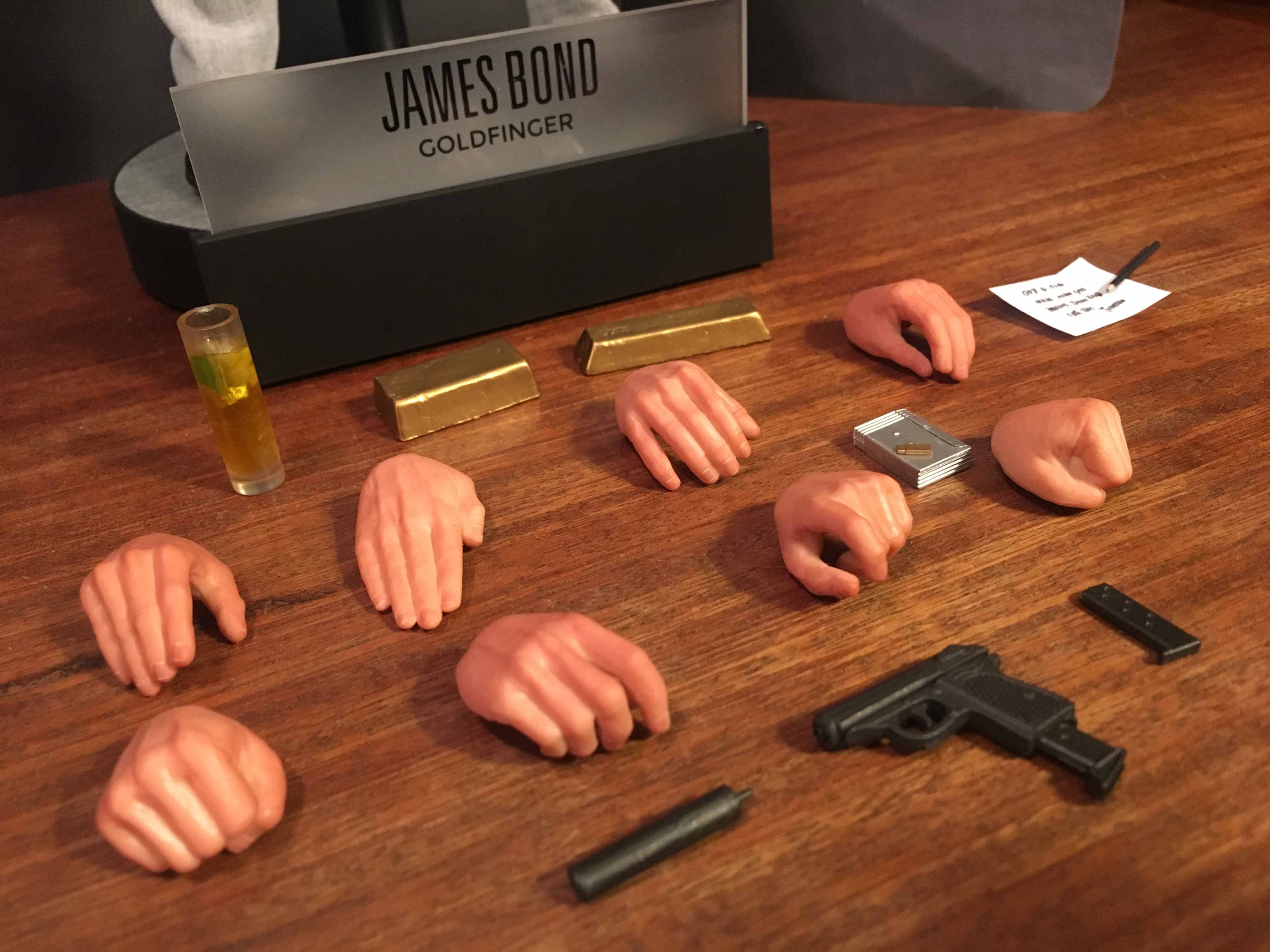 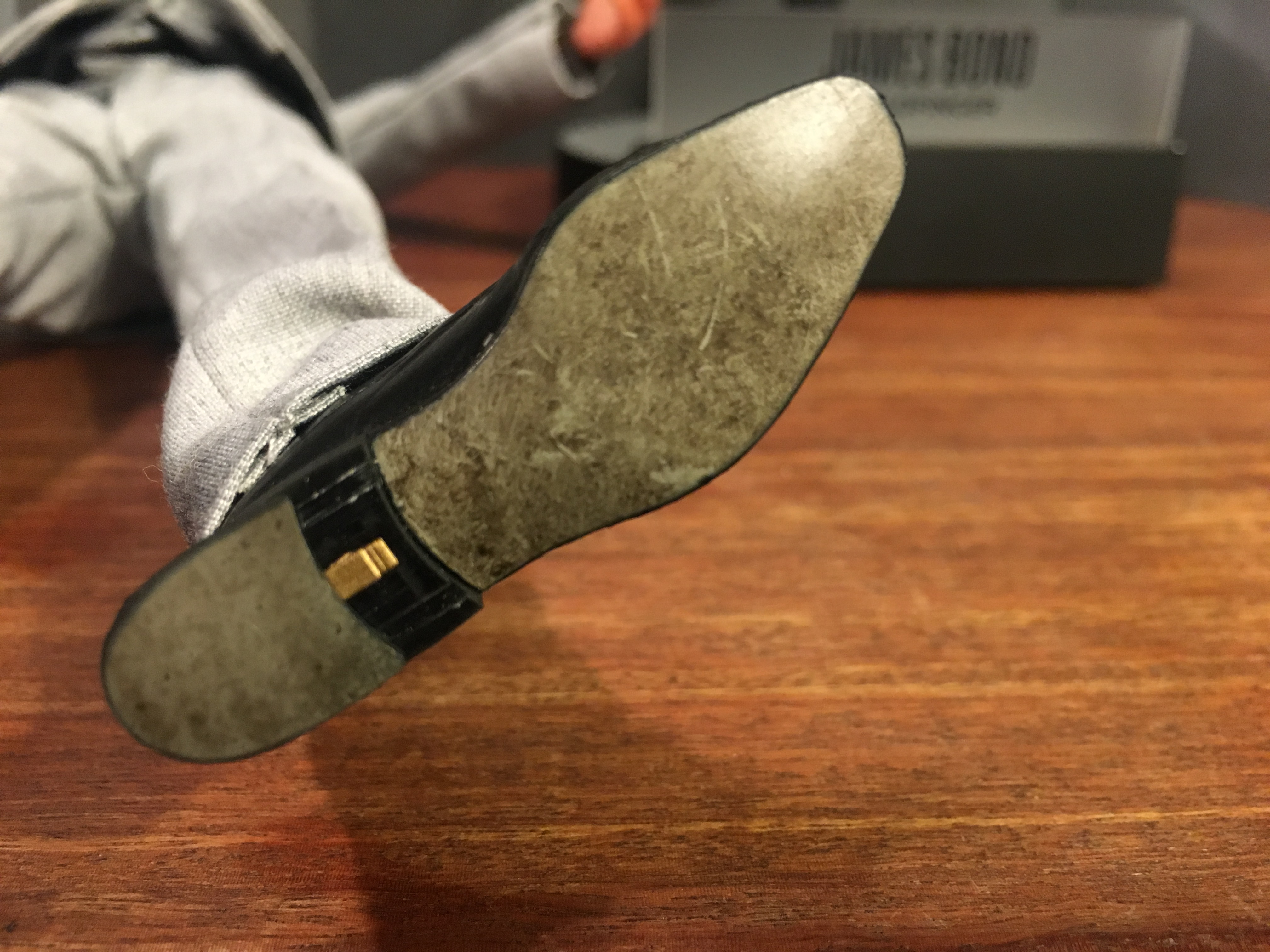 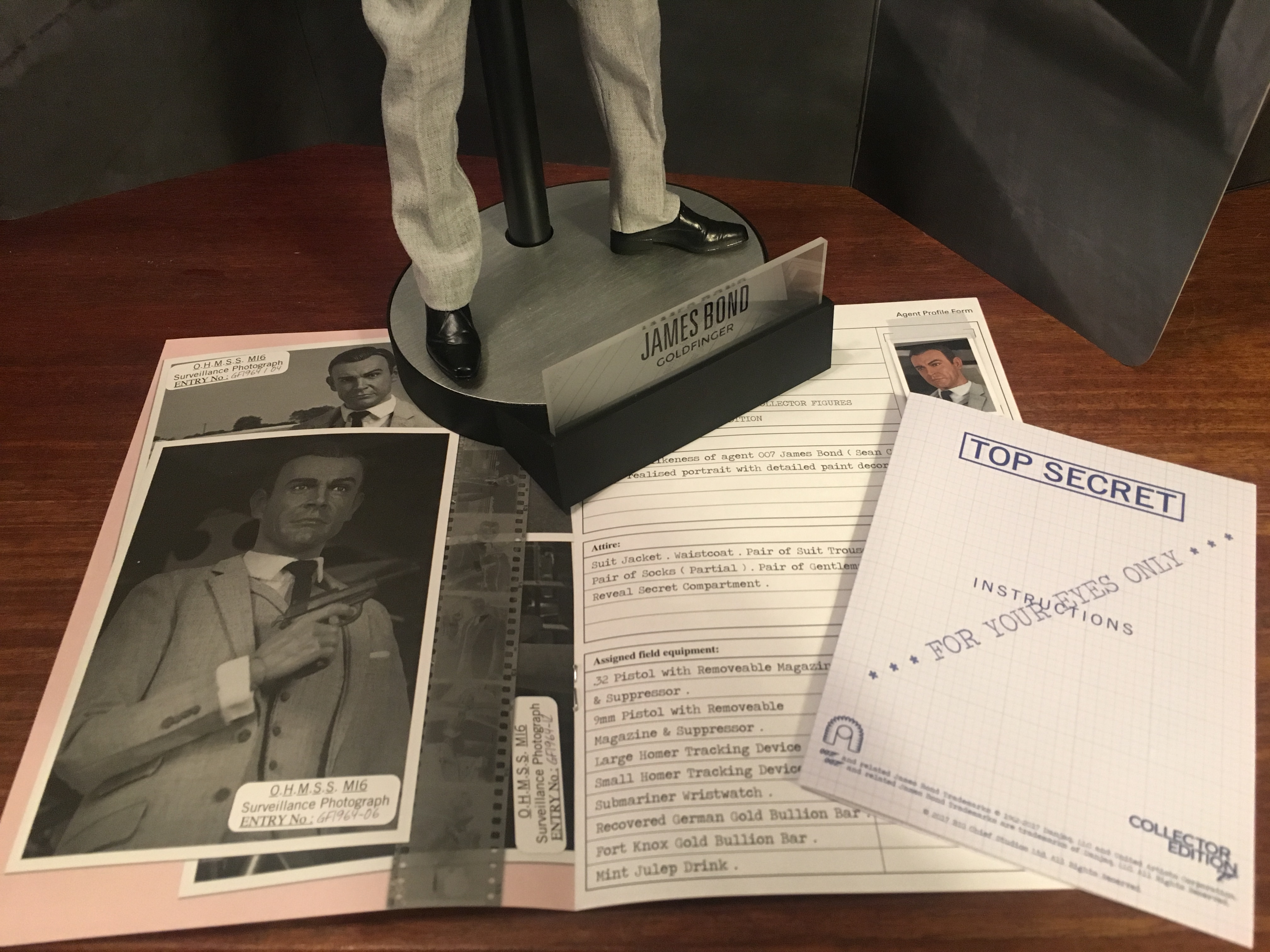 Each figure comes with its own stand, with an illuminated name plate. (Batteries sold separately.) It looks good either lit or unlit: 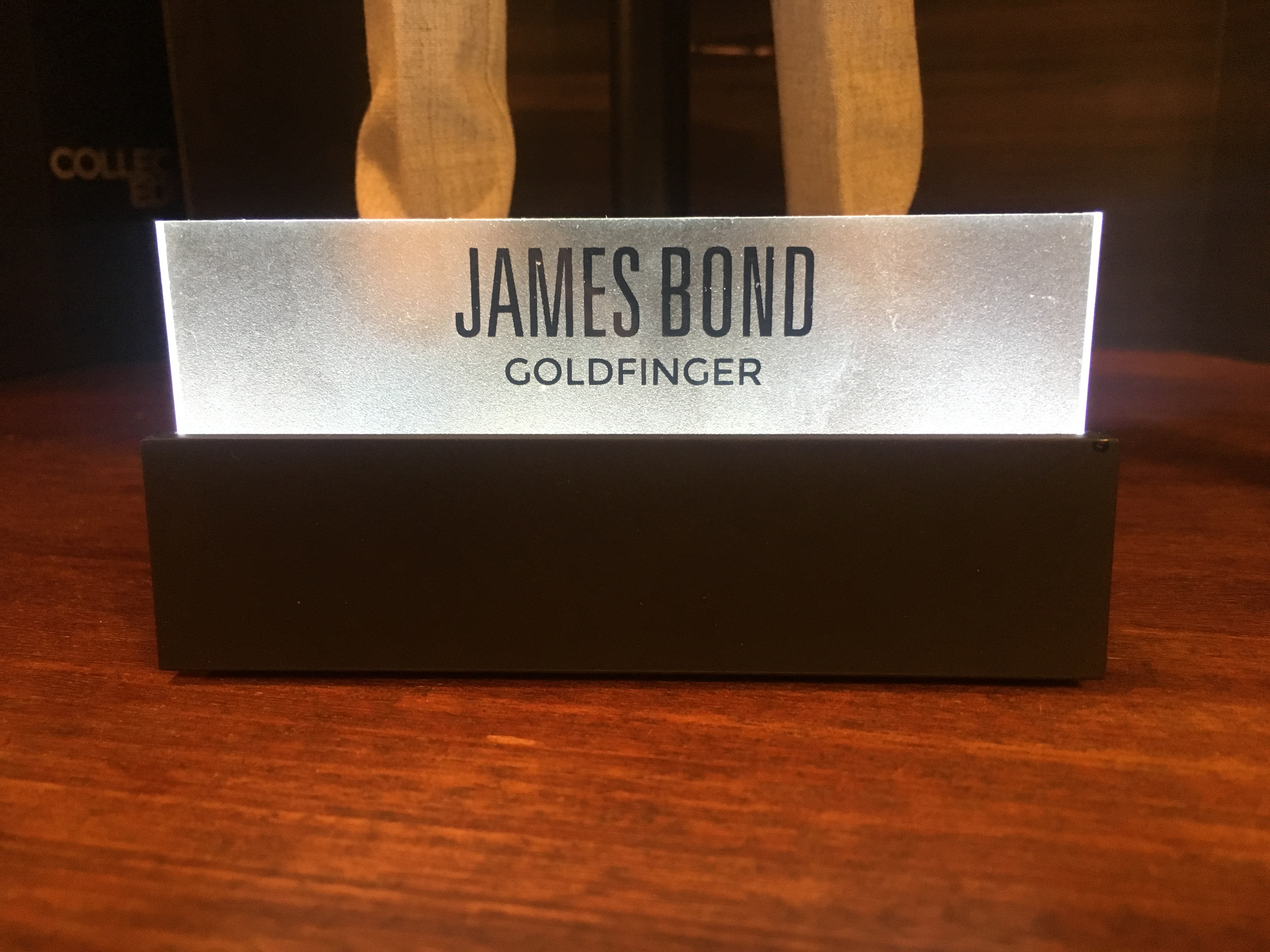 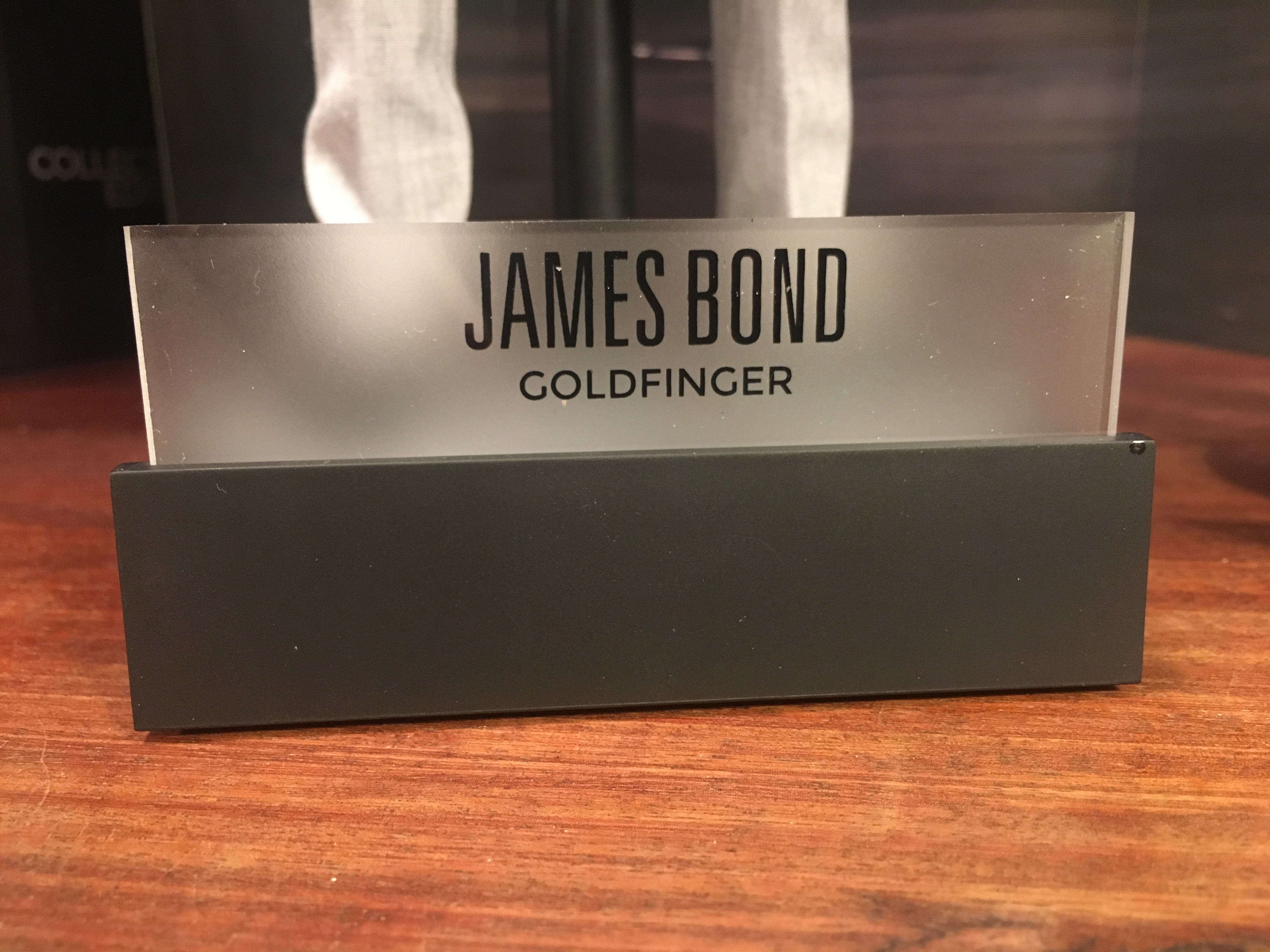 There are also a couple of miniature dossiers that give the character’s background, as well as specs and instructions.

But, really, it comes down to the figure itself and even without all the intensely detailed accessories, this 007 is much like the real thing — smart and stylish. 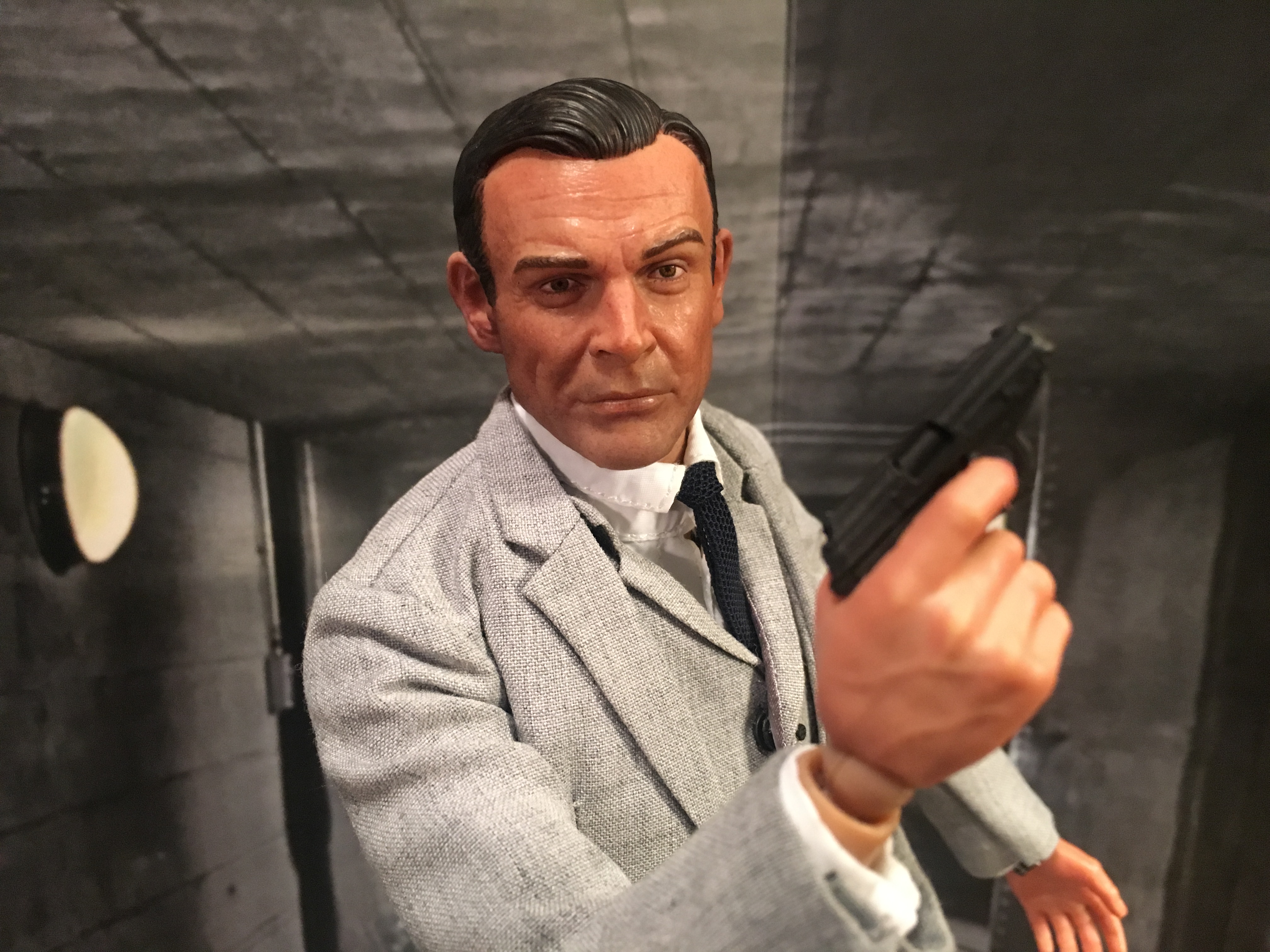 Goldfinger’s likeness lags behind the other two in this initial series. He looks like Gert Frobe but not quite enough like him, compared to the more accurate Bond and Oddjob figures. 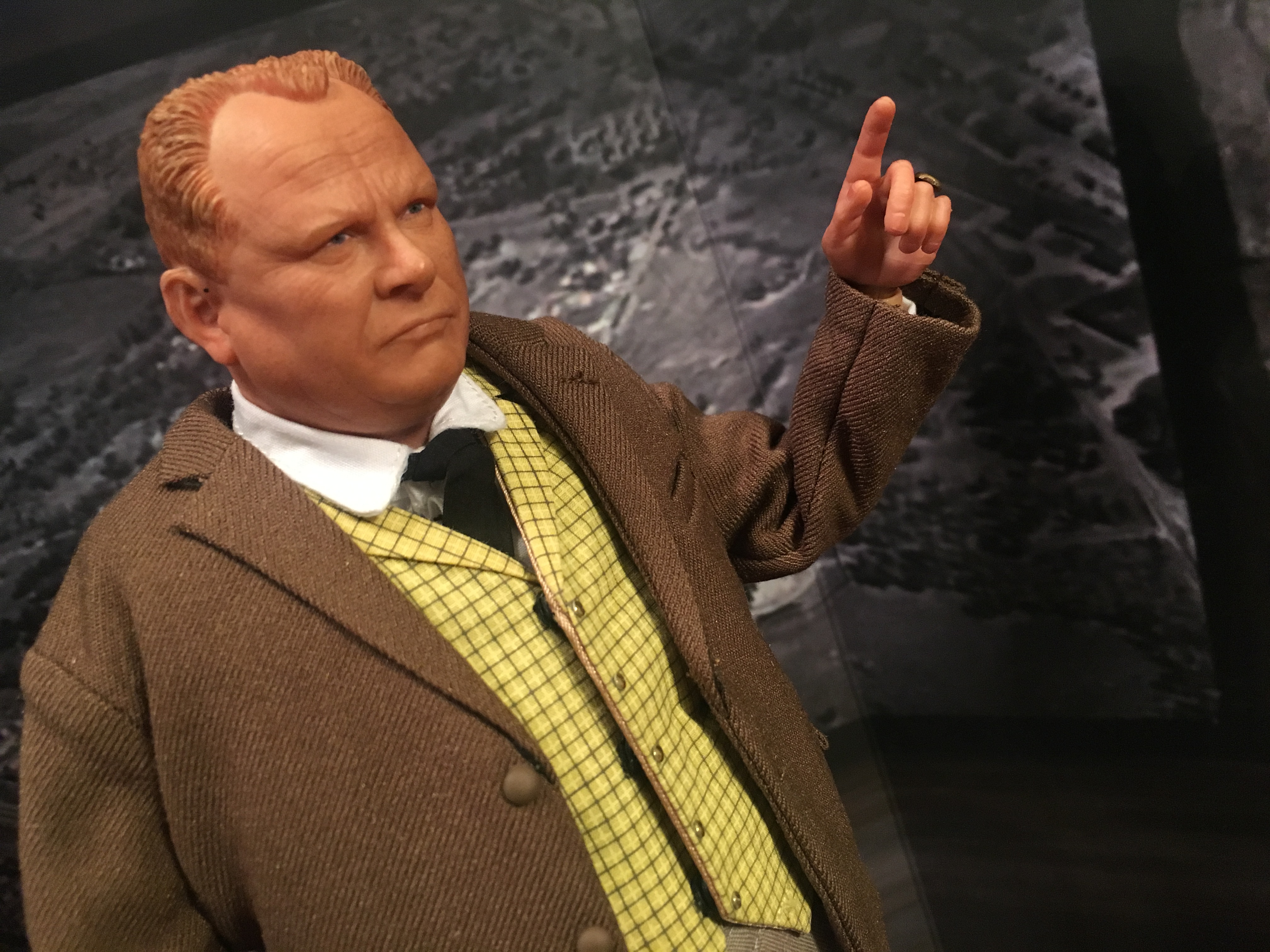 But the figure overall is a success. Getting the clothes to fit a classic build like Connery’s is one thing. Getting them to fit a heftier body like Frobe’s is something else entirely. But BIG Chief pulls it off with Goldfinger’s brown jacket, gold checkered vest and riding pants. 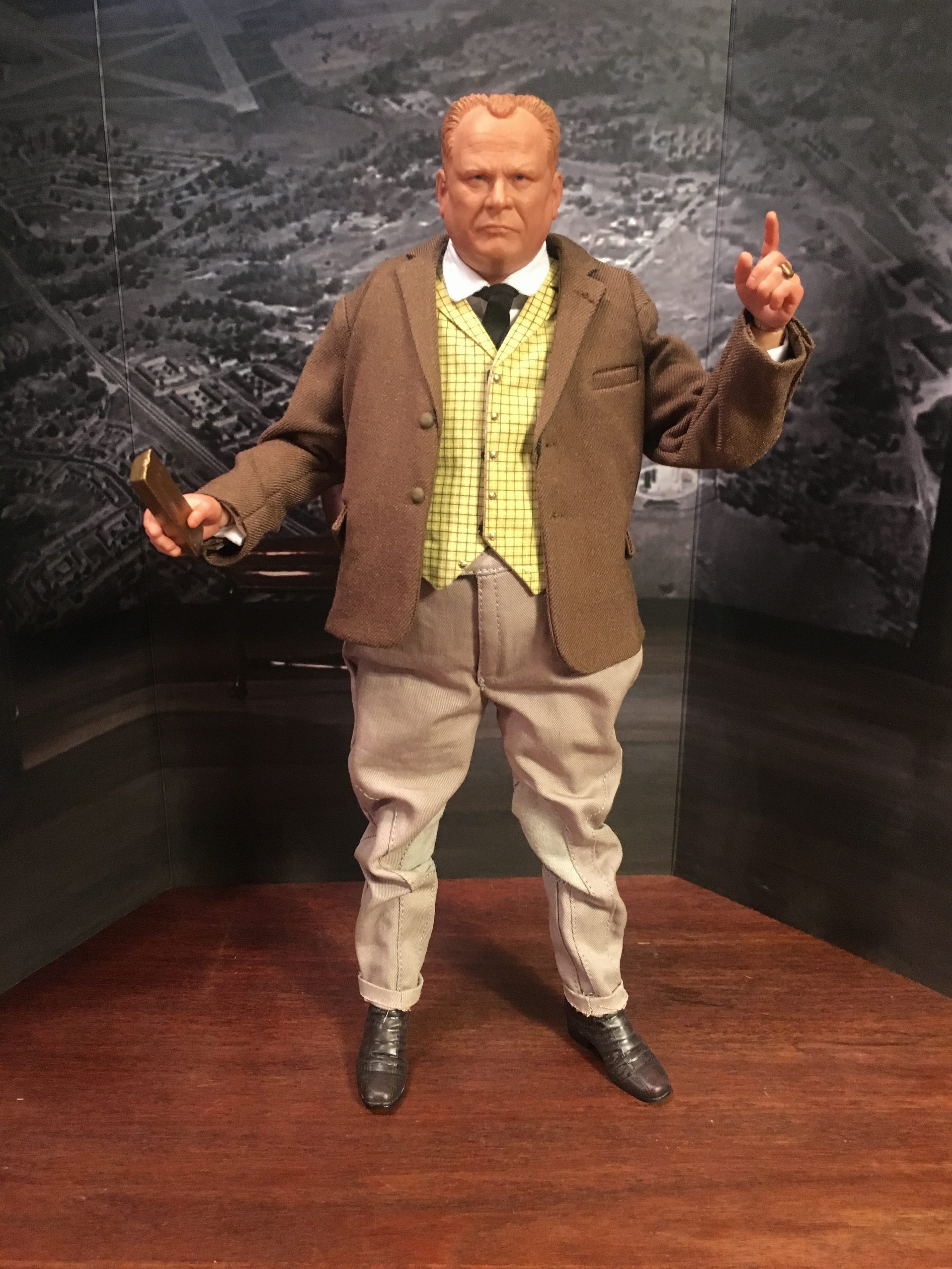 His accessories include the requisite interchangeable hands, figure stand and dossiers; two bars of gold bullion; a gold wristwatch; a snooker cue; a canister of Delta 9 gas; riding gloves and cap; and a gold pistol — he was the man with the golden gun well before Scaramanga, don’t forget. The gun is another good example of BIG Chief’s amazing attention to detail: The revolver’s barrel actually turns.

He and Bond are also served mint juleps — which they can drink while sizing each other up at Goldfinger’s ranch. 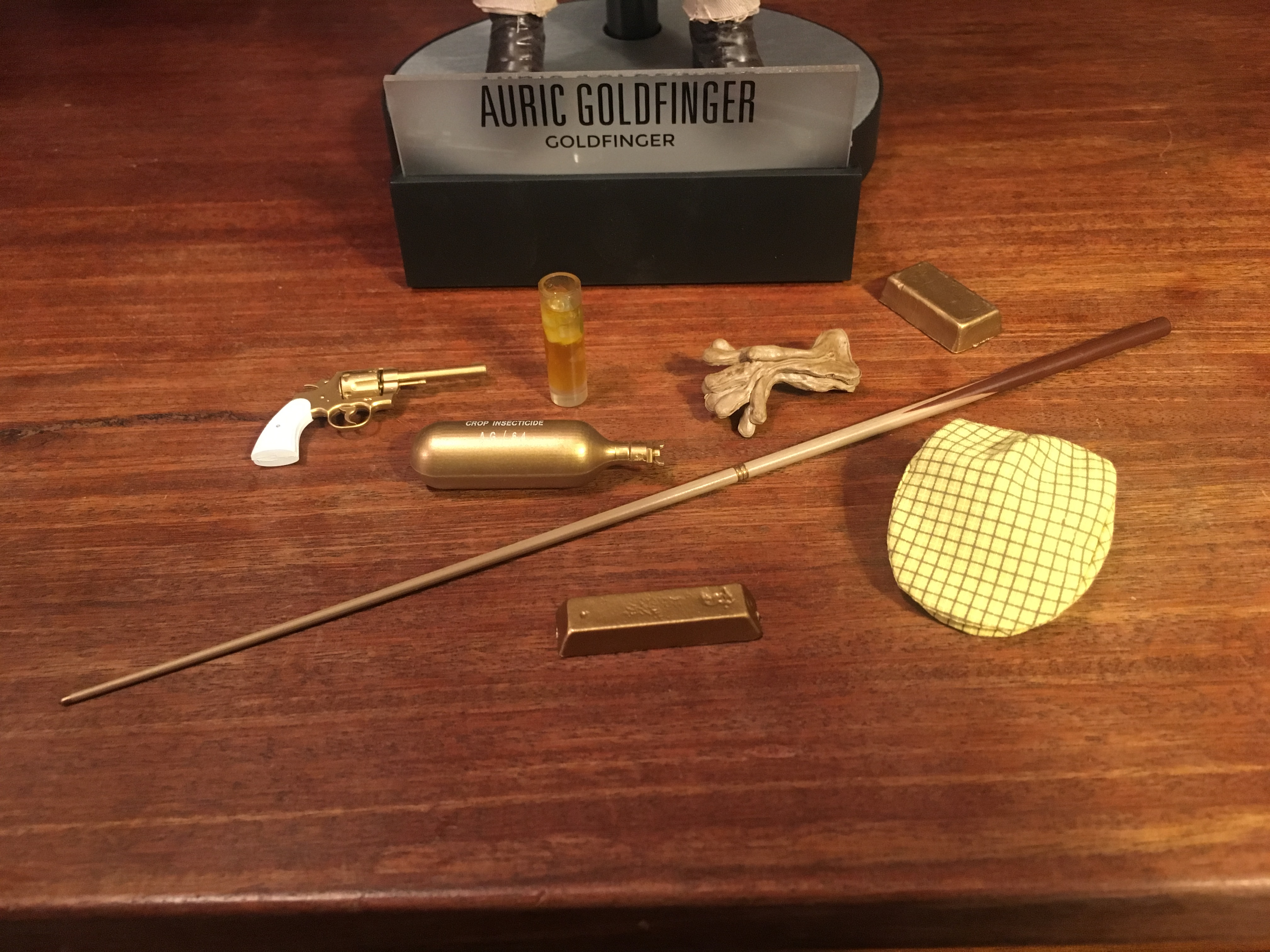 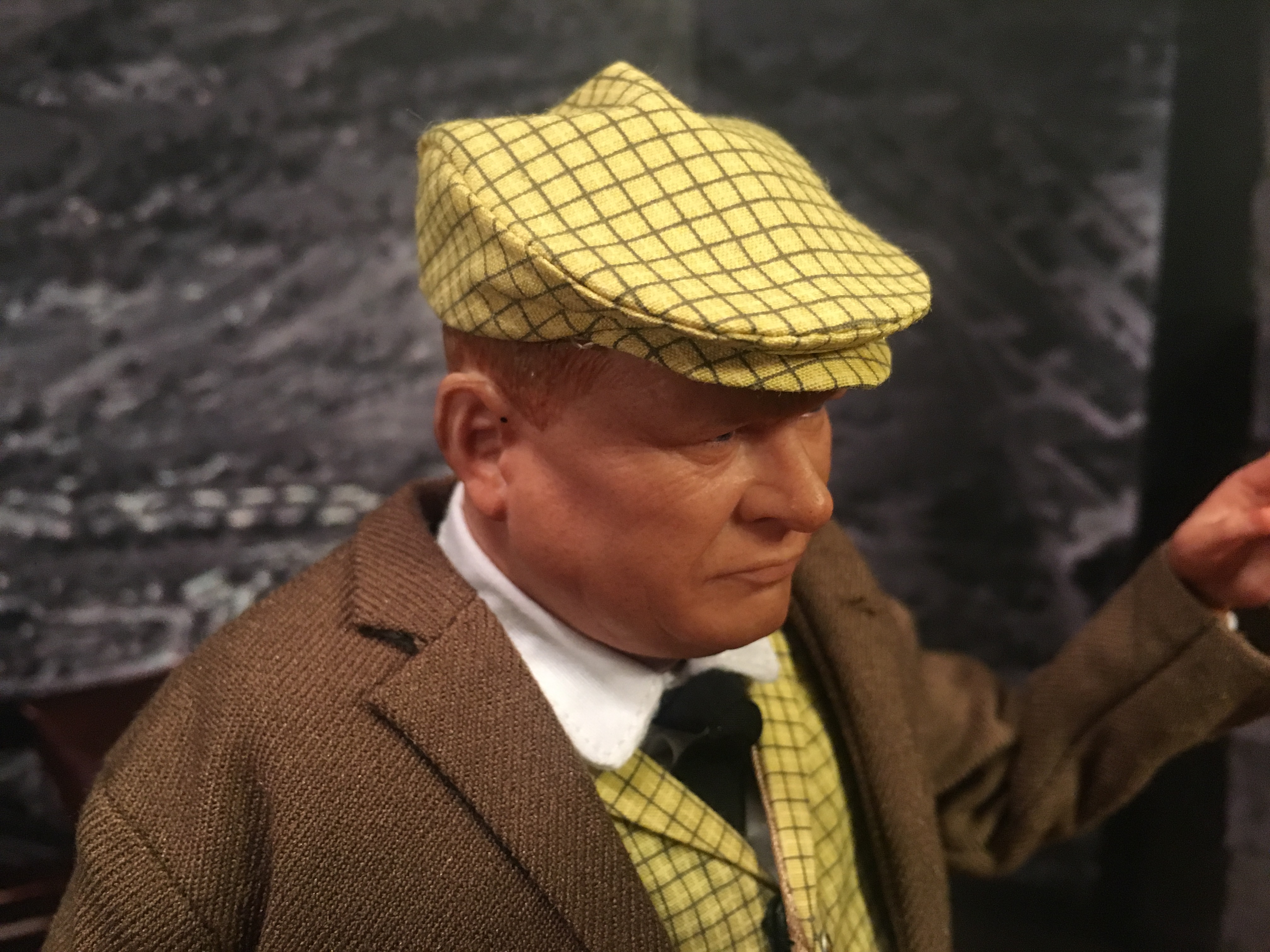 Word to the wise, by the way: BIG Chief is aiming for exactitude, which they’ve achieved to a breath-taking degree, and sometimes the trade-off is a certain fragility. Be careful when handling these.

OK, now we’re talking. (Or we would be if Oddjob could.)

This figure is just about on par with the Connery Bond: an uncanny likeness of Harold Sakata with a suit that fits his stout frame perfectly. Yet where Oddjob really shines is his accessories, which are the most clever of the bunch: Sure, he has a gun (with silencer), a watch and gold bullion (as well as dossiers, multiple hands and stand). But he also comes with two trusty bowlers, including one with a lethal brim — and the head of the statue he decapitates at Goldfinger’s golf club. He also gets a golf ball he can squeeze to try to intimidate 007. A good henchman is an essential part of most Bond films, and this Oddjob figure proves it’s just as essential for a high-quality line of figures.

These are the Bond figures I’ve been waiting for almost my entire life. Sure, I’d still love a whole run of more affordable 6-inch figures, but that seems unlikely, given 007 film-company EON Productions’ predilection for higher-end merchandise.

When I spoke to the folks from BIG Chief back at Toy Fair, they made it clear that they want to produce as many versions of Bond and his supporting cast as possible. Next up is Live and Let Die, featuring Roger Moore’s 007, Jane Seymour’s Solitaire and Geoffrey Holder’s Baron Samedi. (Click here for info on that figure series.) Personally, I’d really like to see Joseph Wiseman’s Dr. No, Donald Pleasence’s Blofeld and Christopher Lee’s Scaramanga. I’m confident we’ll also see Connery and Moore in tuxedos at some point. I’d also like to see how BIG Chief tackles a character like Ursula Andress’ Honey Ryder: She’d have to be in her iconic bikini, I’d imagine, but that may preclude a high level of articulation. Still, that’s probably a sacrifice worth making for the proper aesthetics.

Regardless, that’ll all require patience: The Live and Let Die series isn’t due to be released until next fall, putting BIG Chief on a pace to release one set a year.

But that’s OK. Because if the figures still to come are anything like the high-quality Goldfinger line, they’ll be worth the wait. 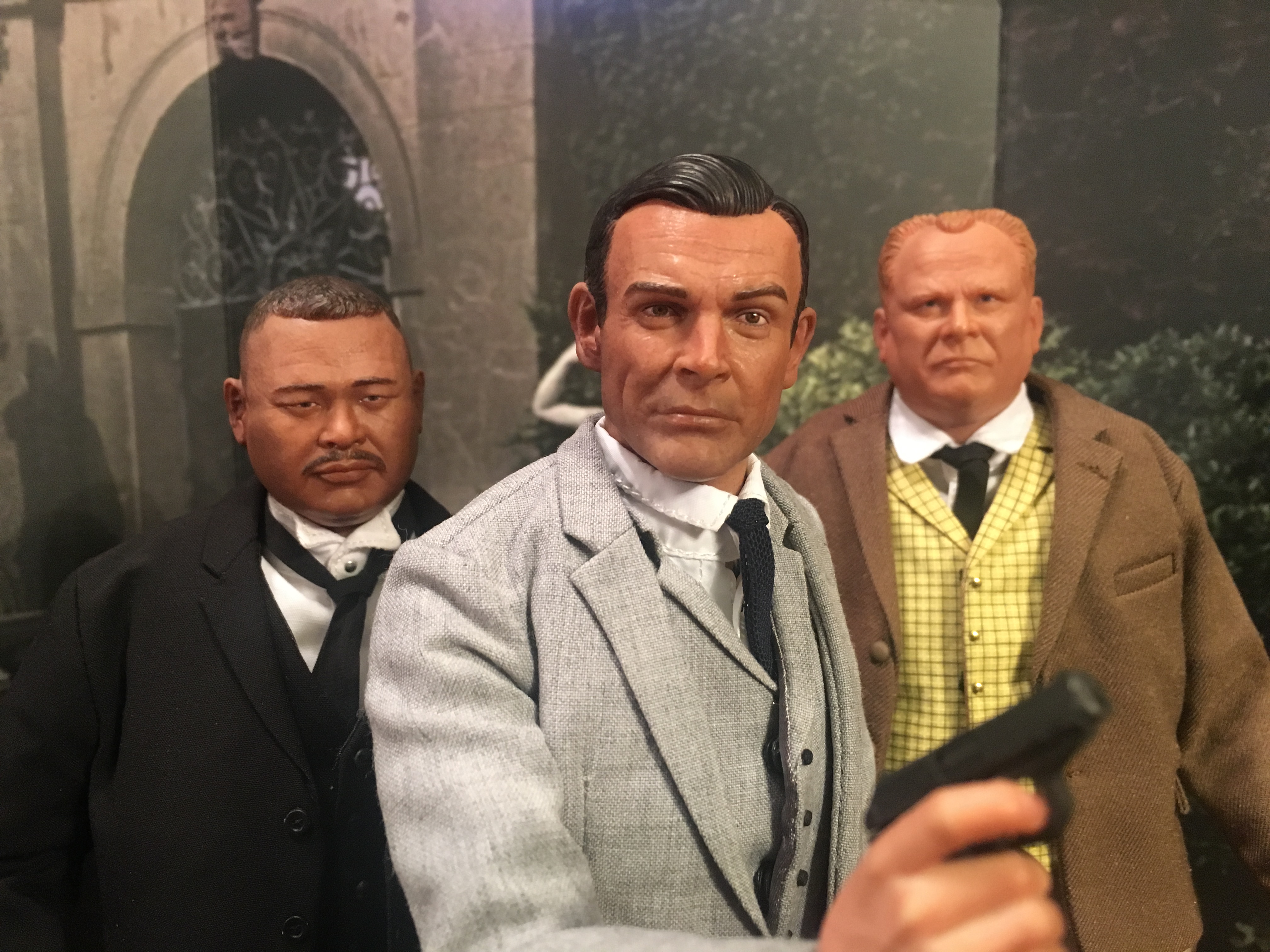