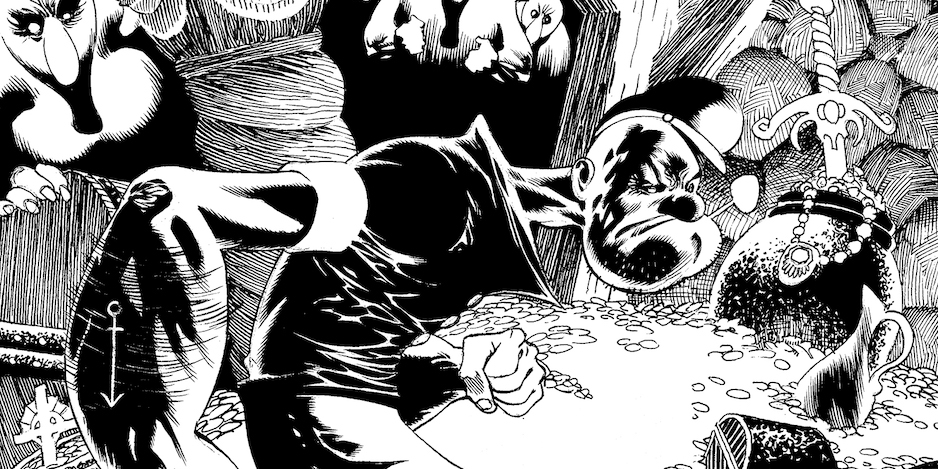 I watched Popeye as a kid. Thought he was great. Still hate spinach, though.

But that’s not why I’m here. I’m here to tell you about Popeye Variations, a new book that celebrates the ultimate Sailor Man with art by some of the biggest names in underground and mainstream comics. 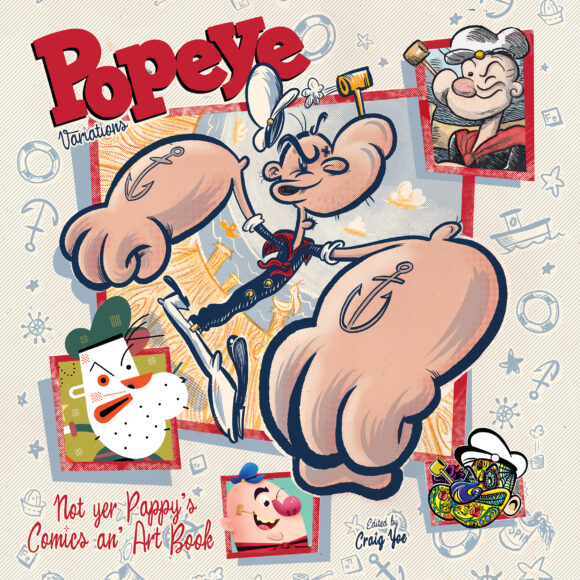 It’s just the kind of project you’d expect from Yoe! Comics — which has teamed with Clover Press on a new Kickstarter that I’m willing to wager will be funded as quickly as Popeye’s biceps become warships.

Dig the official press release — plus an EXCLUSIVE SNEAK PEEK at some of the art slated for Popeye Variations.

Clover Press and Yoe! Books have teamed up to create Popeye Variations: Not Yer Pappy’s Comics an’ Art Book, a 10″ x 10″ hardcover book featuring over 100 illustrations from 75 underground and mainstream artists and cartoonists with their own takes on the spinach-munching, bully-punching Popeye the Sailor Man. 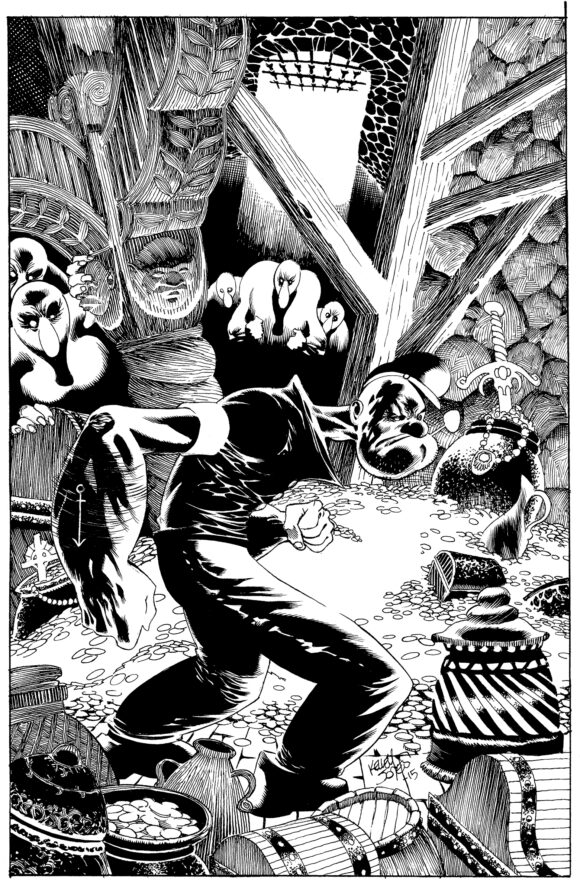 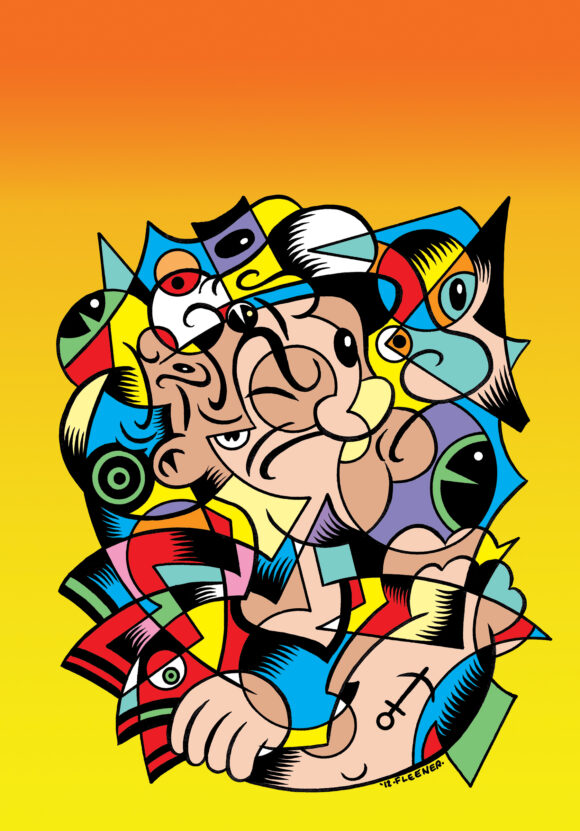 With over 100 pages of Popeye art and comic strips, including new art, new comic strips and art by Bud Sagendorf from the original 1940s & 1950s Popeye comic books, this is a must have for any fan and collector of the pop icon Sailor Man. The campaign allows fans to secure early copies of Popeye Variations, plus exclusive collectibles featuring art from the book, via Kickstarter. Popeye Variations campaign is now live on Kickstarter. 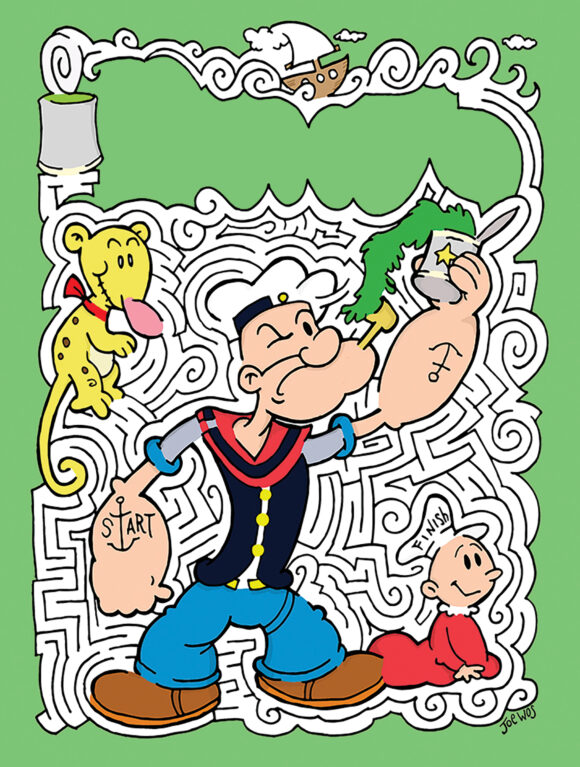 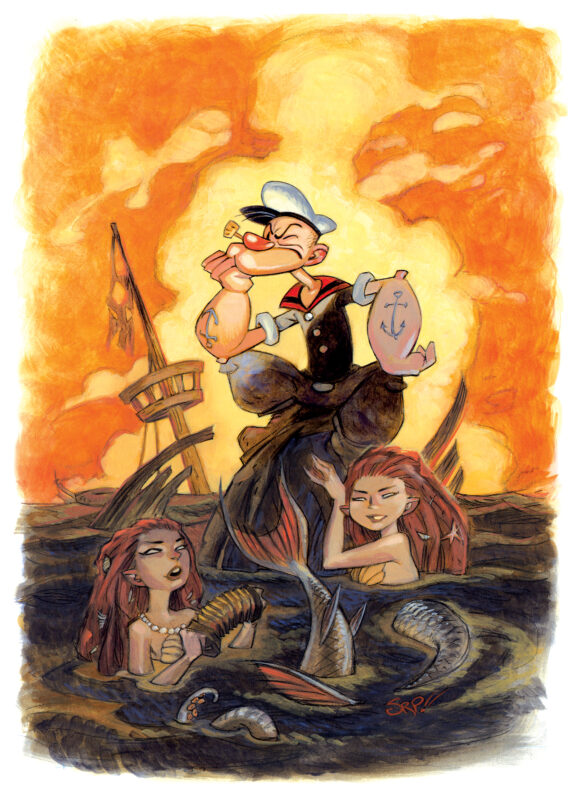 Popeye, the iconic, spinach-eating sailorman, is owned by King Features, a unit of Hearst and home to some of the world’s most popular entertainment characters.

In 2012, IDW Publishing and Yoe! Books teamed up to re-present the classic Popeye comic book series that debuted in 1948 by Bud Sagendorf, the long-time assistant to creator E.C. Segar. Many of the variant covers of IDW’s comic book run are featured in this Popeye Variations art book, and several of the original variant cover comic books will be offered as special tiers on this campaign.

“We’re excited to publish this amazing collection of Popeye art, some seen in limited circles, but all deserving to be shared with Popeye fans around the world,” said publisher Hank Kanalz. “Craig Yoe and Robbie Robbins have curated and designed a beautiful hardcover that must not be missed.”

“This special book is packed with illustrated eye-candy that we know fans will adore,” said Christina Nix Lynch, licensing director at King Features. “But we are particularly thrilled that the prolific talent responsible for the Popeye’s Cartoon Club digital comics will have the opportunity to see their work live on through a new medium in this beautifully curated anthology.”

Click here for more information on the Popeye Variations Kickstarter.

— JACK KIRBY: ANIMATED — A History of the King in Cartoons Is Coming Your Way. Click here.