The late, great Max Fleischer was born 138 years ago! 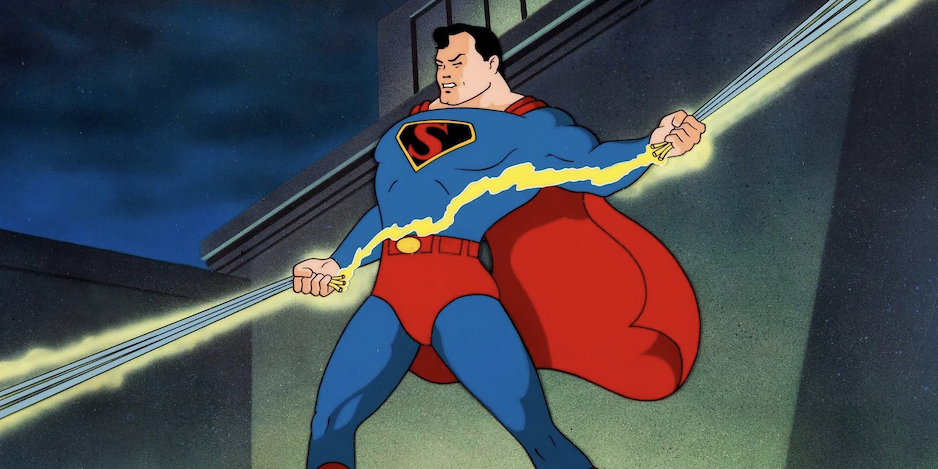 The pioneering animator and inventor Max Fleischer’s birthdate is July 19, 1883, and is it any coincidence that on July 20, 2021, the trade paperback of The Comic Book History of Animation – by artist Ryan Dunlavey and me — arrives on store shelves worldwide? 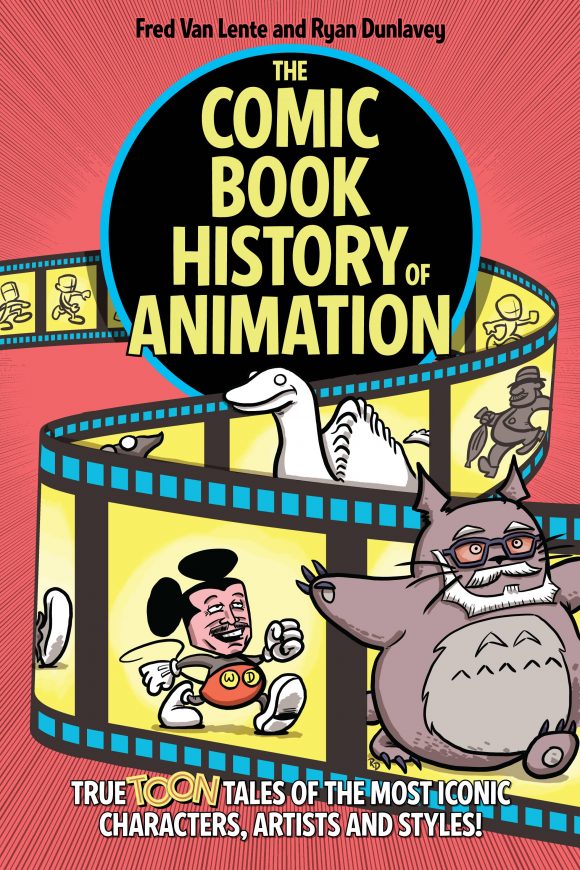 I mean, yes, it absolutely is a coincidence, Ryan and I are not smart enough to plan these things, but you hardly need an excuse to celebrate the achievements of Max Fleischer, a true pioneer in the field. In CBHOA, Ryan and I elaborate on his humble beginnings in the industry: 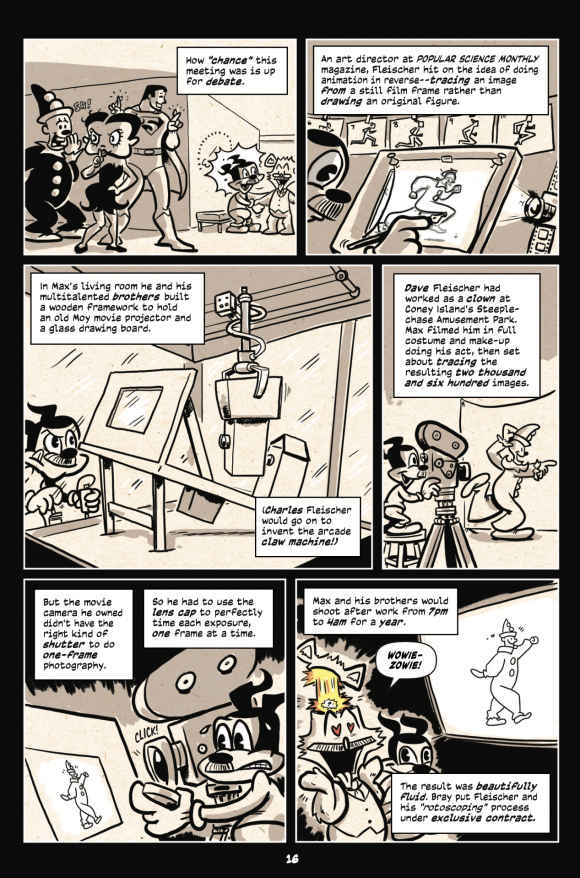 After working for cartoon studio mogul J.R. Bray, Max and his brothers opened their own studio in Times Square, where they produced classic series like “Out of the Inkwell,” “Betty Boop” and “Popeye the Sailor,” adapted Einstein’s Theory of Relativity into an animated short, and even invented the famous “Follow the Bouncing Ball.”

Unfortunately, labor troubles embittered Max against his own employees, and he moved his studio to more management-friendly Miami. Sadly, this was the beginning of the end for him. Even though he produced a well-received feature, Gulliver’s Travels, to compete with Walt Disney’s output, the studio’s remote (by 1940s standards) location caused constant cost overruns and personnel shortages.

But the worst was yet to come. As Ryan and I explain: 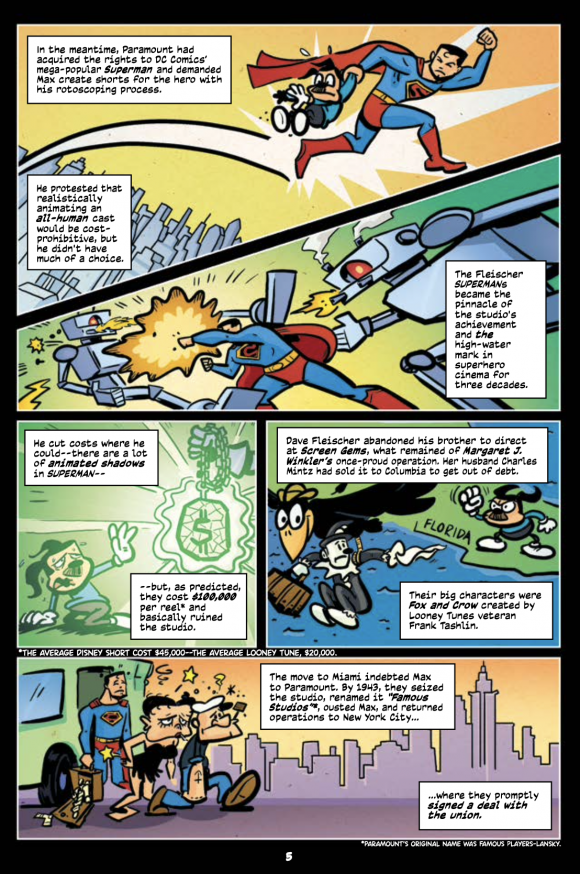 They may have caused huge challenges at the studio, but there’s a lot to love about the Fleischers’ Superman toons. With all due respect to Margot Kidder and Dana Delaney, they have my favorite depiction of Lois Lane, ever. The Fleischers’ Lois has the über-confidence of a cokehead on an all-night bender and the self-preservation skills of a toddler chasing a ball onto an eight-lane highway. How she survived this long before the guy from Smallville arrived is a complete mystery. For some reason she is the character with the fewest lines in her face, just daubs of color, so maybe she’s some kind of invincible pillow person?

The corporate shenanigans behind these cartoons were so FUBAR that they fell into public domain years ago. Various prints and edits have floated around on video forever; fortunately for Amazon Prime subscribers, the streamer has a shockingly deep bench of historically important animation, and you can watch all of the Superman shorts there — here’s the TOP 13 I think you should watch, in chronological order!

1. “Superman” (Dir. Dave Fleischer). The Daily Planet learns a nut with a death ray is threatening the city. What does Lois Lane do? Do some interviews on deep background? Infiltrate the bad guy’s lair in disguise? HELL no. That’s not how OG Baller Lois rolls. She flies a plane to the guy’s lab, lands at his front door, and starts bombarding him with questions. He of course promptly ties her up and plans to kill her. Once Superman saves her from the exploding lab, she returns to the Planet and scoops Clark Kent on the story. YOU GO, GIRL.

2. “The Mechanical Monsters” (Dir. Dave Fleischer). Max Fleischer was an incredibly accomplished inventor who held about a zillion patents, most importantly for the rotoscoping process used so liberally in this series. So all the tech in Superman looks great: These automated bank-robbing bots kind of look like they might actually work—when they’re not getting glitch-slapped by Supes, that is. Woman Without Fear Lois Lane stows away inside one of the mechs; while trying to rescue her, Superman is nearly electrocuted by power lines. Find better friends, Clark.

3. “Billion Dollar Limited” (Dir. Dave Fleischer). Cowled crooks attack a massive gold shipment with proto-punk nihilist Lois “No Future” Lane aboard. Basically a long chase scene between a sedan and a train, then between a train and Superman, it’s pretty rad. Lois, who I just want to make very clear, gives zero fucks, uses a tommy gun to hold off the robbers herself until a destroyed bridge requires Superman’s intervention.

4. “The Arctic Giant” (Dir. Dave Fleischer). Archeologists discover a frozen dinosaur in Siberia and bring it to display in Metropolis. The minute Lois Lane, Deathtrap Magnet, is assigned the story, you know that refrigeration unit is going to break and we’re going to have a good old-fashioned Godzilla Stomp on our hands. All the monsters and animals in the series look much cartoonier than the meticulously rotoscoped humans (i.e., traced from live-action film), which adds to the series’ charm.

5. “The Bulleteers” (Dir. Dave Fleischer). Flying bullet cars threaten to destroy Metropolis unless they get the contents of the municipal treasury. These guys may know their way around bullet cars, but they don’t know jack about American cities’ finances. I live in and occasionally work for New York City, and I am pretty sure the entire contents of our treasury are three pizza rats and a “Lindsay ’72” bumper sticker.

6. “The Magnetic Telescope” (Dir. Dave Fleischer). A guy sticks a giant horseshoe magnet on top of an observatory, and everyone acts surprised when it draws murderous comets to Metropolis. Weirdly, Superman decides to take a cab to the observatory to rescue Lois, voted Most Likely to Be “Deep Impacted” in high school. A comet bit causes his cabbie to flee, inspiring the Man of Steel to change means of transportation and fight back the unwelcome celestial visitor himself.

7. “Electric Earthquake” (Dir. Dave Fleischer). This one is so daffy it may be my favorite of the bunch. A Native American mad scientist emerges from his undersea lab and threatens the Daily Planet with manmade earthquakes that will destroy the city if his tribe doesn’t get its $24 refund for selling them the land in the first place. Why he delivers this threat to the Planet and not, say, to the Department of the Interior is anyone’s guess. At least this gives Lois Lane, Human Carry-On Item, a chance to hide aboard the bad guy’s pneumatic sub.

8. “Volcano” (Dir. Dave Fleischer). Mt. Monokoa in the Pacific has been upgraded from dormant to active volcano, giving Lois an excuse to get killed in some other time zone. Unfortunately, Perry White makes her take spineless milksop Clark Kent with her. Ugh! Lois swipes Clark’s press pass to leave him behind so she can travel directly to the mouth of the volcano, which of course erupts within five seconds of her arrival. She almost manages to scale down a cable car line by herself before Superman rescues her. This is our own Dan Greenfield’s favorite of the series, and it’s not hard to see why: Its apocalyptic images are pretty terrific.

9. “Terror on the Midway” (Dir. Dave Fleischer). The circus is in town, providing Lois Lane with many new and colorful options for self-destruction. Someone lets the giant gorilla loose, and Superman disappoints her once more by saving her. Not exactly the most original tale, but the gorgeous deep-focus animation (I’m guessing via yet another Fleischer invention, the setback camera) looks dynamite.

At this point in Superman, the Paramount takeover happened. Other than Fleischer Studios becoming “Famous Studios” in the credits, I can’t say there’s a hugely noticeable difference, although the series does become a lot more dependent on racial and/or ethnic stereotypes of varying levels of awfulness. (Particularly in comparison to the respectful treatment of the Native American villain in the Fleischer-produced “Electric Earthquake.”) Though Golden Age comics were hardly paragons of progressivism, they were positively Woke compared to Golden Age cartoons, which were full of offensive caricatures and racist humor. African-Americans were the primary butts of jokes before World War II, but directly after Pearl Harbor the Japanese (and Asians in general) got the worst of it.

That said, many of the Famous Studios entries do continue the high quality of the series:

10. “Showdown” (Dir. I. Sparber). I’m fond of this one because it is one of the few that appears to be lifted directly from the comics, an early Siegel and Shuster effort about a crook who dresses in a Superman costume. Why the mob doesn’t realize this is going to attract the attention of the real Superman I have no idea, but I guess Metropolis isn’t sending its best and brightest to the Mafia. The crooks flee and Superman gives pursuit through and outside the boss’ cliffside mansion in a terrifically animated chase sequence.

11. “Eleventh Hour” (Dir. Dan Gordon). Compared to the pure Cringe of Warner Bros’ “Tokyo Jokio” and “Bugs Bunny Nips the Nips,” the two World War II anti-Japan Superman entries are relatively mild… though the title of one, “Japoteurs,” should give you some idea of what to expect from this kind of propaganda.

Though DC famously refused to let the Man of Steel get too involved in World War II,  Paramount shows no such compunctions. Clark and Lois are in a Japanese port on assignment, giving Superman the opportunity for some nocturnal maritime sabotage. Not being complete idiots, imperial authorities arrest Lois and threaten to execute her if Supes doesn’t knock it off. Clark accidentally buries himself in a dry dock truss, delaying her rescue until the last second, as implied by the title. It’s a pretty thrilling and suspenseful cartoon, but consider yourself trigger-warned against the stereotyped depiction of a wartime foe.

12. “The Mummy Strikes” (Dir. I. Sparber). Again, a short that harks back to the earliest of Superman strips—Superman works to free a woman unjustly convicted of murder. She’s been accused of poisoning her boss, a hieroglyphics expert who may have actually been cursed by King Tush (snicker) in the Egyptian wing of the museum. While investigating, Clark accidentally frees two giant, conspicuously unwrapped Nubian mummies.

13. “The Underground World” (Dir. Seymour Kneitel). Lois and Clark join a scientific expedition into a vast cave system, which, of course, leads to a vast undiscovered civilization of virile, R. Crumb-esque bird people. Why bird people would choose to live under a mountain instead of, I dunno, on top of it, where they could like, spread their wings and stuff, goes undiscovered as Superman buries them in a rockslide to prevent them from dipping Lois in molten gold. The use of color and shade in this cartoon is especially striking.