Nothing Will Stop Us, Readers! 50 Years of JACK KIRBY’s FOURTH WORLD

The unlikely origin of the King’s epic saga… 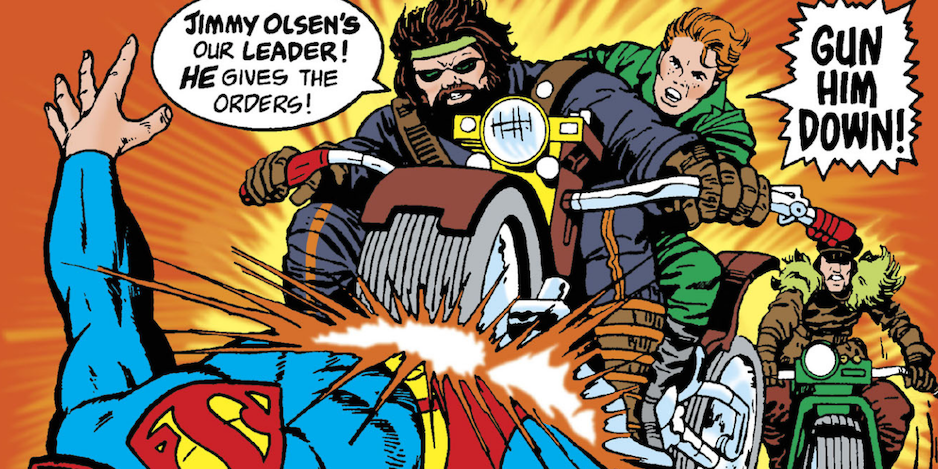 On Aug, 25, 1970, Superman’s Pal Jimmy Olsen #133 hit the stands – and so began an unlikely comics revolution: Jack Kirby, one of the chief architects of the Marvel Universe, had come to rival DC and his first issue was headlined by Superman’s sidekick.

But instead of, say, bringing back Giant Turtle Jimmy Olsen or Porcupine Jimmy Olsen, the King used the opportunity to launch his universe-shaking Fourth World Saga – the reverberations of which are felt to this very day.

By coincidence, 50 years later to the month, a small start-up called NeoText is looking to put its mark on publishing – dedicating itself to illustrated short-form prose and narrative non-fiction, including work by comics stalwarts like Howard Chaykin, Fay Dalton, Jim Mahfood and many more.

So with the Fourth World anniversary in mind, NeoText Culture Editor Chloe Maveal has some thoughts about Kirby, Olsen, an unexpected landmark issue and its aftermath. 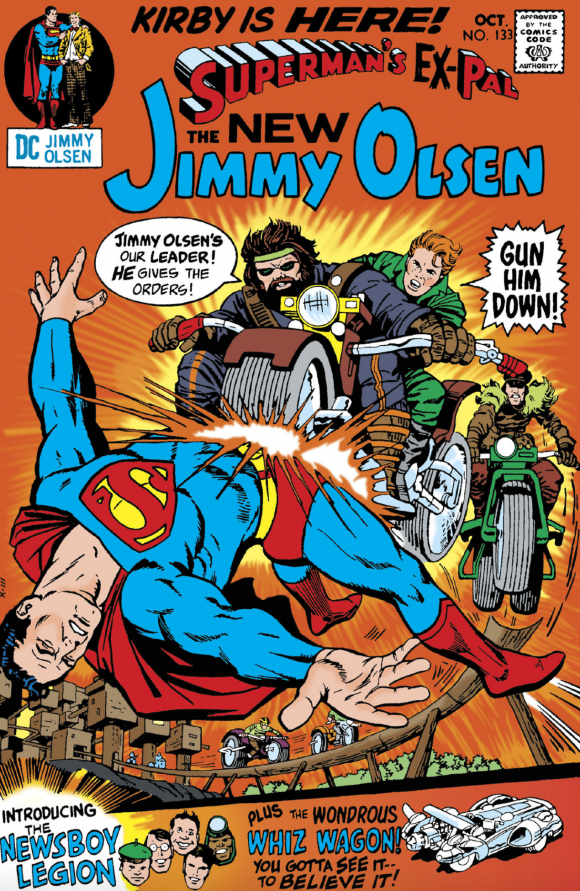 Fifty years ago today, Jack Kirby officially arrived on the DC Comics scene with Superman’s Pal Jimmy Olsen #133, and I can only imagine the gleefully confused look on regular Jimmy Olsen readers’ faces when they picked up that first issue of Kirby’s run. Sure, the arrival of Kirby wasn’t a surprise — DC’s comics had featured tons of house ads teasing “The Great One is Coming!” and “Kirby is Coming!” for months ahead of time, and the previous issue had announced that Kirby would be taking over writing and drawing the series the following month — but still.

Even those who’d been aware of Kirby’s work with Marvel Comics were likely unprepared for just what a shock to the system his presence at DC would be, let alone the impact that Jimmy Olsen #133 would have on Kirby’s reputation for ages to come.

For more than a decade after its 1954 launch, Jimmy Olsen was the go-to title for whimsical tales focused on the redheaded sidekick to the Man of Steel — usually getting himself into unlikely scrapes that a passing-by Superman could easily solve with a quick gust of super breath or whatever.

It’s not that the stories weren’t fun, either. Each issue provided entertainment enough to keep it going month to month. But they were definitely unthreatening, gentle and… well, safe. Nobody really  read Jimmy Olsen to get excited.

And then Kirby arrived, as advertised. 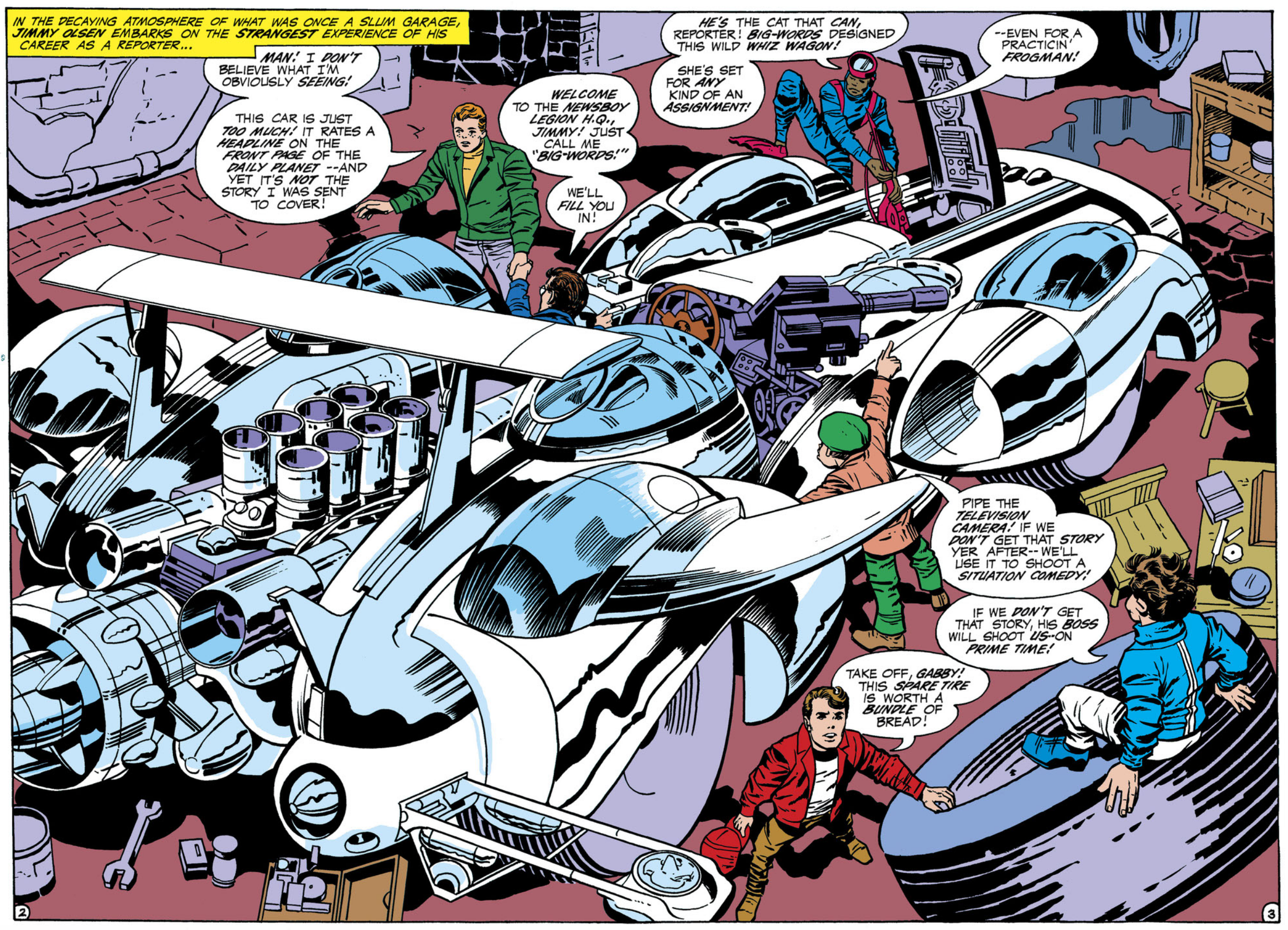 The only difference this time was that this wasn’t the Jack Kirby that everyone was expecting. It was close on a visual level — despite Superman and Jimmy’s faces being replaced in the finished product by in-house artists to maintain the all-important brand identity — but comic fans had never experienced pure, uncut Kirby writing before. Freed from Stan Lee’s input and dialogue, Jack Kirby’s comics proved to be ambitious in ways no-one could have imagined — and more contemporary, as well.

Jimmy Olsen #133 is the first chapter in what would become known as the Fourth World Saga in some circles, Kirby’s massive multi-series storyline that is, in many ways, his magnum opus (despite being cut short due to cancellation). Considering Kirby’s strengths and successes elsewhere — such as creating both Captain America and the entire romance comics genre with Joe Simon, co-creating what would become the Marvel Universe as we know it now with Stan Lee, Steve Ditko and others — that might feel like a bold claim, but it’s a case that can be easily argued.

It’s not simply that the Fourth World is Kirby at his creative peak while working solo with few to no creative restraints either; it’s that the Fourth World Saga is Kirby creating a story about everything. It’s as much about his experiences in World War II — with arch-villain Darkseid’s unsubtle reign of fascism, for example — as it is about the moral ambiguity of war and choosing to be a soldier (or choosing to be a conscientious objector, as the Forever People attempt to do with little success). It’s about familial relationships, and the question of nature versus nurture. And, perhaps most of all, it’s about Kirby’s fascination with the way generations interact with each other. This really comes as no surprise to anyone, however, considering one of the primary series is titled The New Gods, where the star is Darkseid’s son rebelling against his father. 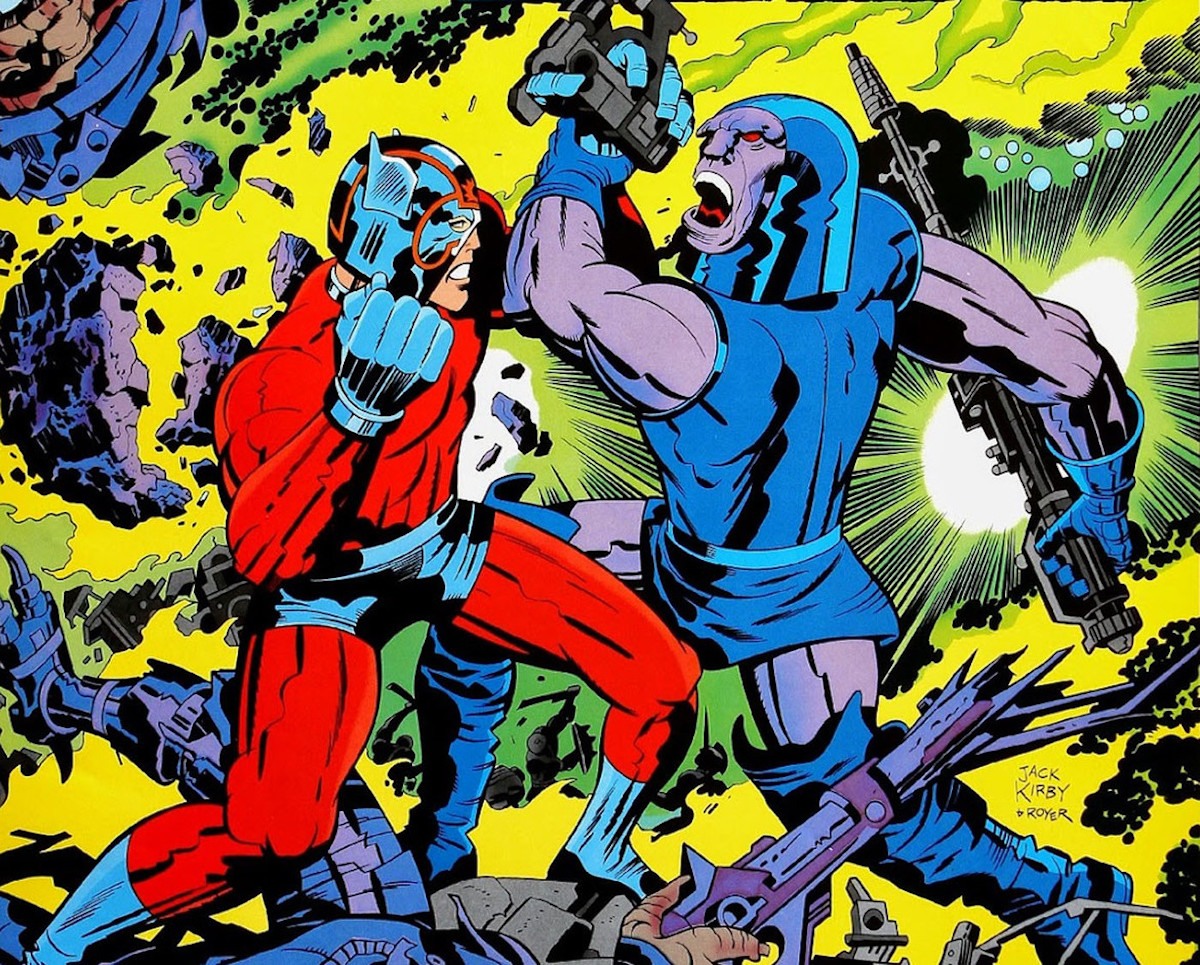 As much as Kirby’s first issue of Jimmy Olsen doesn’t include the majority of what fans would consider archetypal pieces of Fourth World mythology — such as Darkseid, who doesn’t debut until the following issue — there’s a generational conflict right at the center of the story as overeager cub reporter Olsen essentially infiltrates a bunch of space hippies who, we’re told, “trust nobody over twenty-five!”

He does so with the assistance of the revitalized Newsboy Legion, a hilariously excitable street gang with access to fantastic technology. When Superman follows him to the cosmic commune, he thinks to himself, “There are no rules here! This is a place of complete anarchy!” 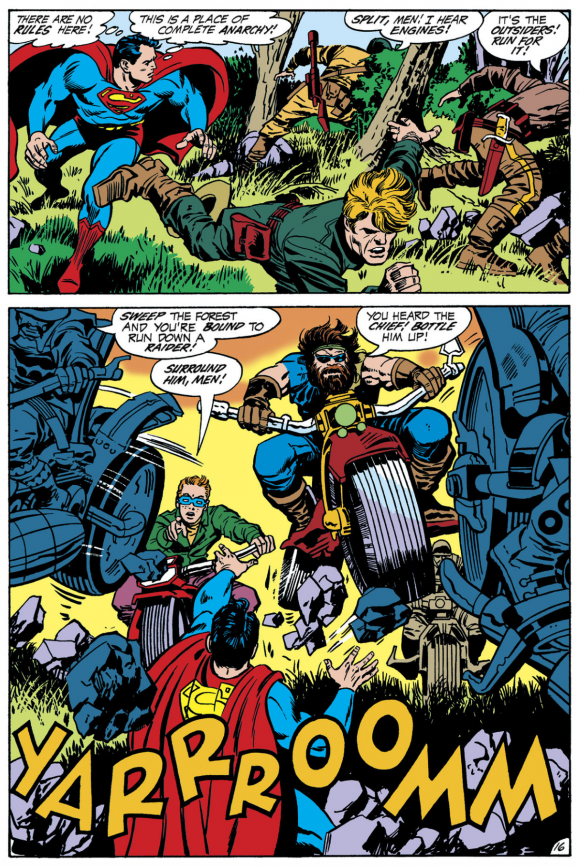 An issue prior, the plot shows Jimmy accidentally revealing Superman’s secret identity because he didn’t realize Clark Kent was the editor of The Daily Planet for a day as part of a weird job-share arrangement. This was clearly new territory for the title, and the cover of #133 made that clear, with a logo makeover that read Superman’s Ex-Pal, Jimmy Olsen and a tagline reading “You gotta see it — to believe it!” To say that this was a departure would be a bit more than an understatement.

But welcome to comics straight from the subconscious of arguably the most creative mind ever to work in the industry, and at a time when the United States was slowly coming to realize what a truly strange time it was to be alive.

Jimmy Olsen was an after-the-fact addition to Kirby’s DC output, and not originally intended as the first of his books to be released. He’d already started work on the other Fourth World titles like The New Gods, Mister Miracle and The Forever People by the time the decision came to add Jimmy to his workload. The irony being that this came from the thinking from execs that perhaps he needed to earn his keep on an existing title in addition to his personal flights of fancy… and also that, maybe, putting him on something that audiences were already reading might act as a better introduction than something entirely new. 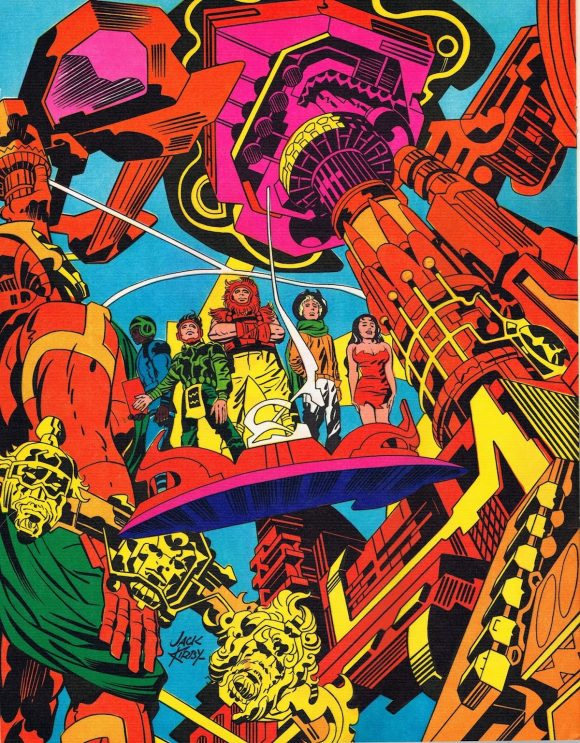 Well, new to readers, at least.

Much of the Fourth World had been in Kirby’s head for some time, with concept art for characters dating back years. The idea of a new generation of Gods replacing ancient myths had, according to those who knew Kirby, come about as a potential storyline for Marvel’s Thor, before he’d decided that his increasingly strained relationship with Stan Lee and the publisher as a whole meant that he might want to keep them in his back pocket until something better came along. Thankfully, it turns out that DC’s offer to jump ship in February 1970 was that “something better.”

There’s a myth that Kirby asked for the gig by demanding to be placed on DC’s lowest-selling title to demonstrate his star power, but the reality is more than a little different, and more evocative of Kirby’s personality: He actually asked for the series because it didn’t have a permanent creative team — he didn’t want to take work away from anyone else. Jack Kirby was, above all, a man who knew what it meant to want to provide for his family. 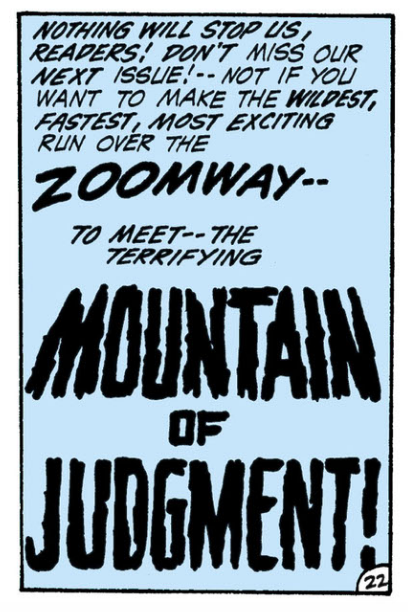 Whatever the reason, when Kirby ended up launching the Fourth World in Superman’s Pal Jimmy Olsen #133, he more than defied expectations. Instead of offering existing readers (and DC executives) the easy entry point into his new worlds, he simply dropped Jimmy and Superman right in the middle of them and enjoyed the fireworks.

Long-time Kirby fans were likely caught a bit off guard as well with writing that was more bombastic and more opaque than the latest issue of Fantastic Four. It was unlikely to have been what anyone expected, and one of the closest examples of the auteur theory offered to that point in mainstream comics publishing — and that was just the beginning of what he had planned.

All in a Jimmy Olsen comic, of all places.

As Kirby himself would put it, on a cover eight issues later: “Don’t ask! Just buy it!”