A couple weeks ago, I happily showed off Funko’s latest DC Comics subscription mystery box, with its Teen Titans theme — which was really a sneak tribute to Marv Wolfman and George Perez’s The New Teen Titans. (Click here for more on that.)

The highlight was the 3.75-inch-scale action figures that come in the box: You get two of these four at random — Nightwing, Starfire, Cyborg or Raven. My box came with the latter two — but now I’ve gotten my hands on Dick Grayson and Princess Koriand’r: 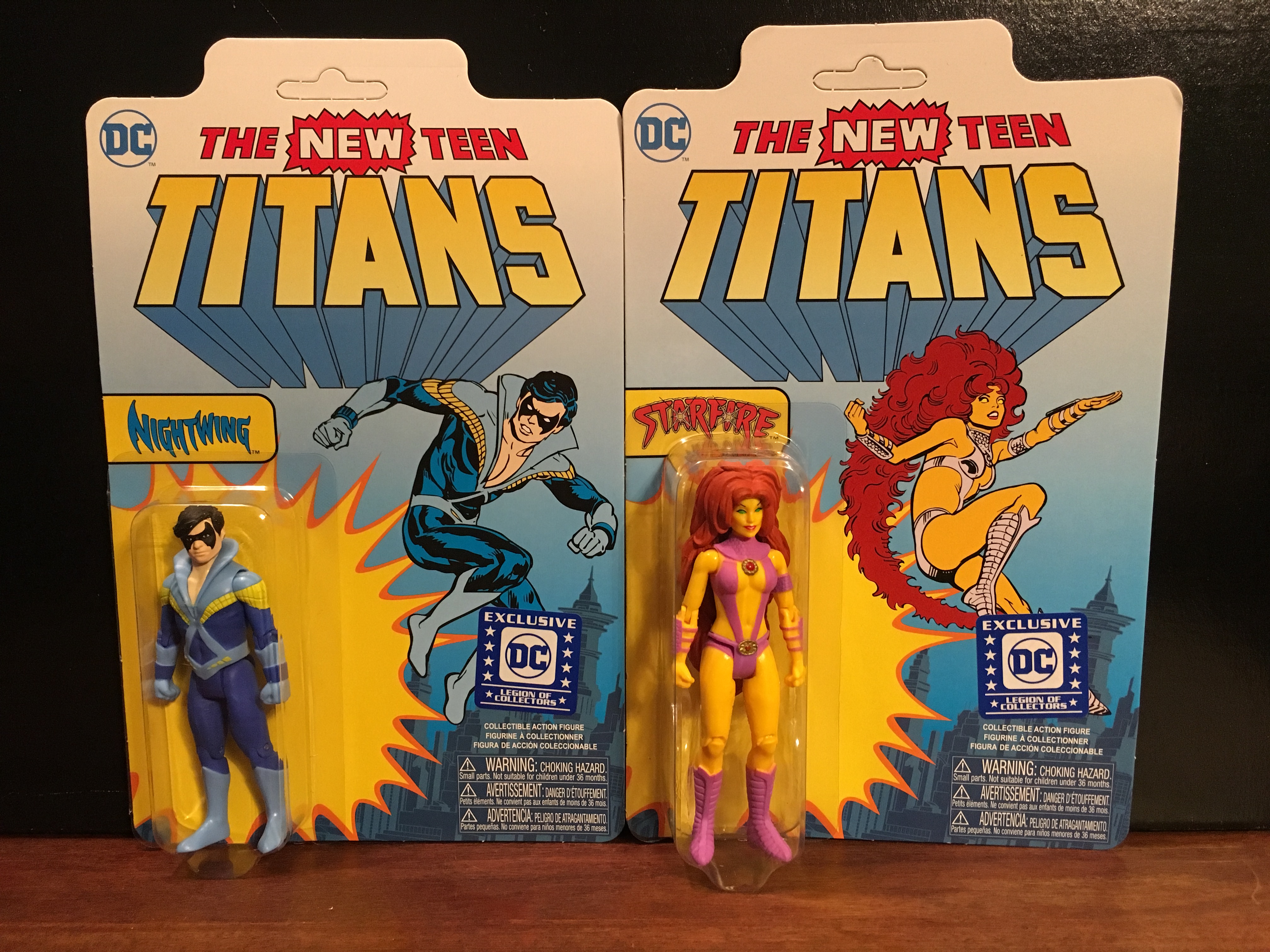 On a personal level, I like these two even better than the first two — especially Nightwing in his original, so-called Disco outfit and Perez-styled haircut. Dick Grayson is one of my all-time favorite characters and his relationship with Starfire was one of the main draws of the classic NTT series.

Best part? Dick’s actually shorter than Kory, so whoever designed these knew what they were doing. 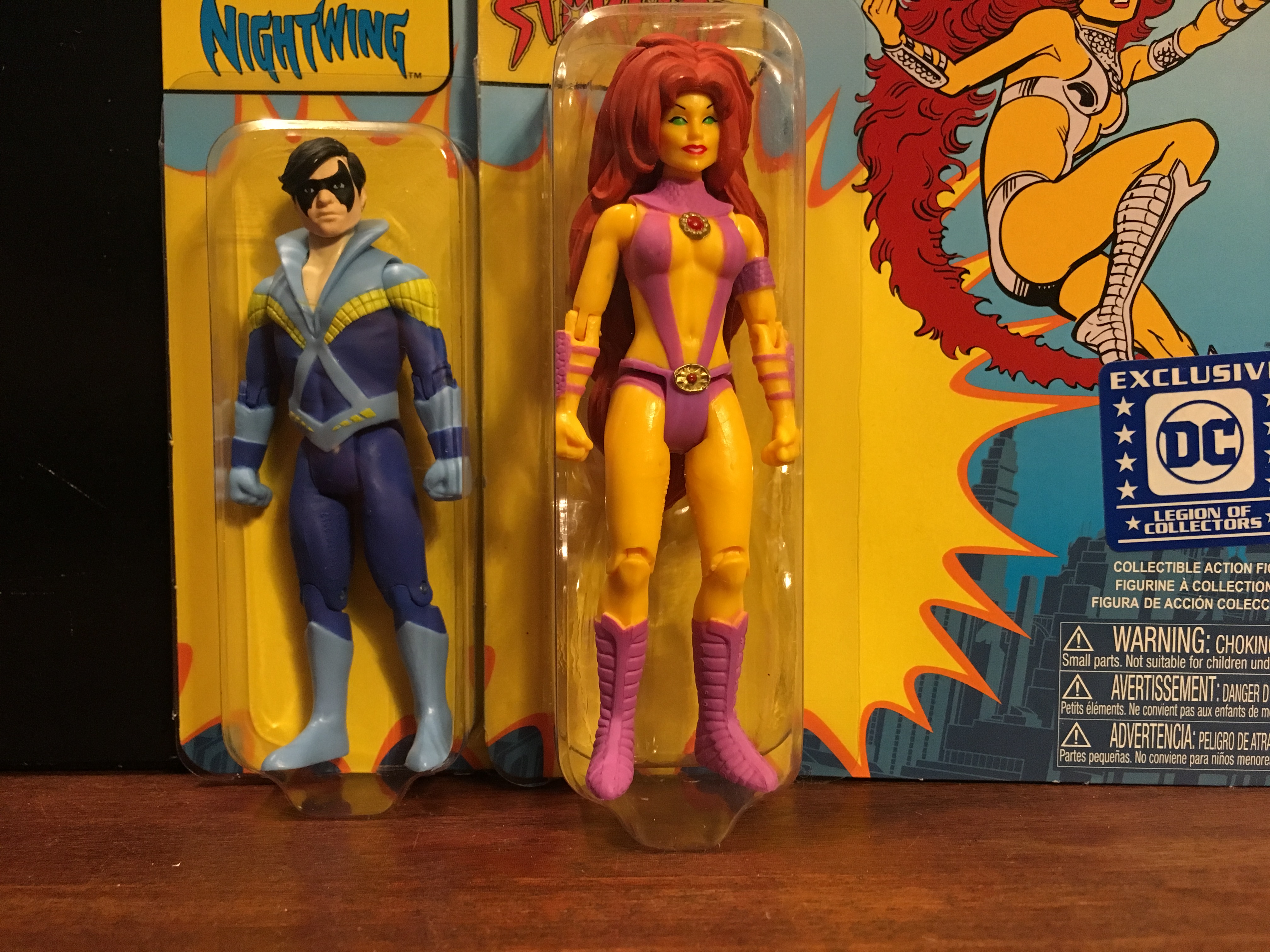 Each figure has nine points of articulation.

(Then again, perhaps he’s a tiny bit too short.)

Like last year’s First Appearance Superman (click here), these action figures were a total surprise. Other than movie or TV properties like Batman ’66, the company isn’t producing 3.75-inch DC Comics action figures for retail. It’s not like these are chase figures or anything. They simply exist on their own.

Which is the only downside. Seeing how great these four figures are makes me want the rest of the Titans team: Wonder Girl, Kid Flash and Beast Boy/Changeling. (Not to mention Dick as Robin.) 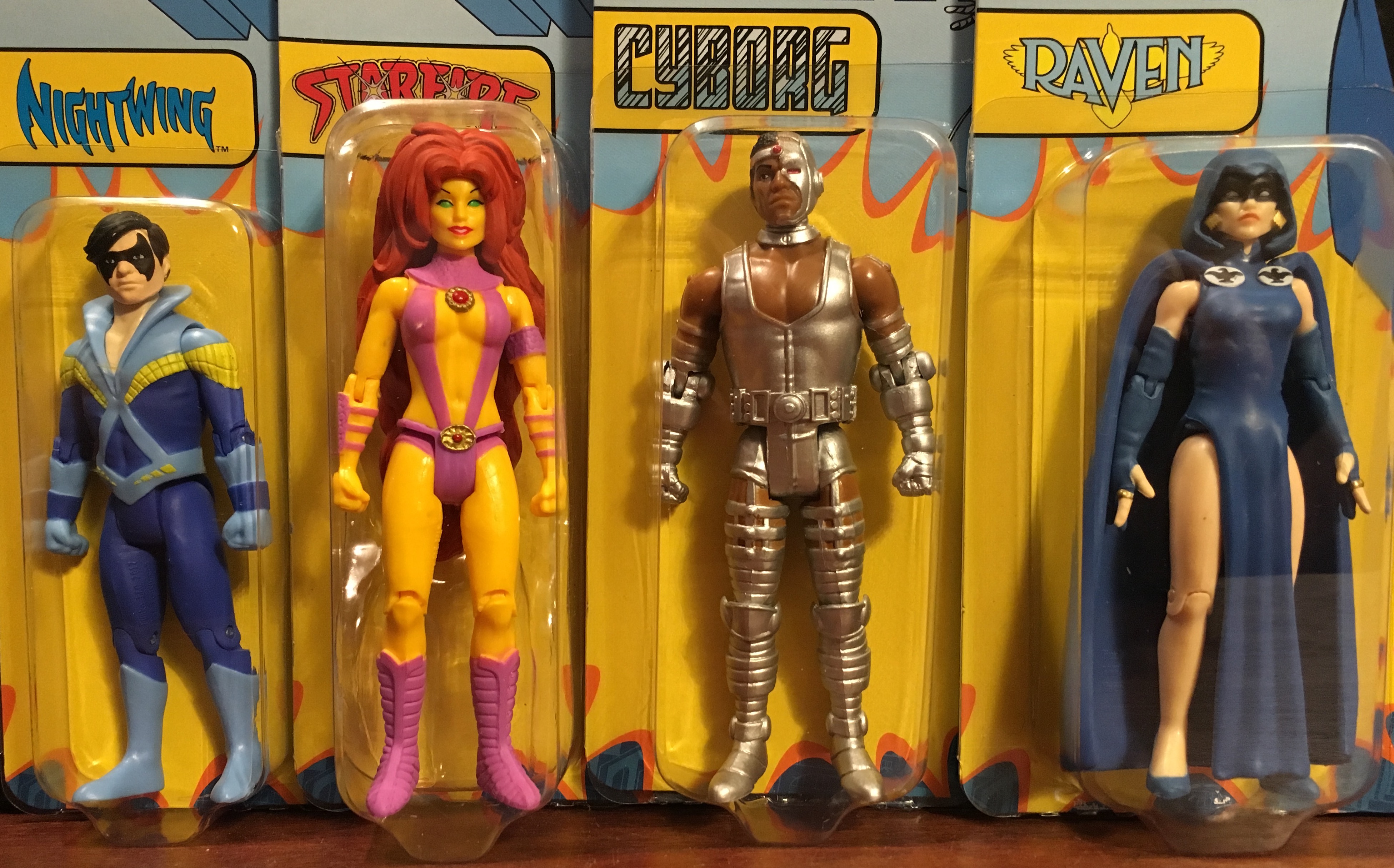 I also would love it if Funko changed over to resealable packaging for these. While I’d prefer the trade art to be George Perez images, the Jose Luis Garcia-Lopez art is wonderfully bright and I just don’t want to mess these cards up.

So in the packages they remain — as if they’ve been captured by Brother Blood … or the H.I.V.E. or… 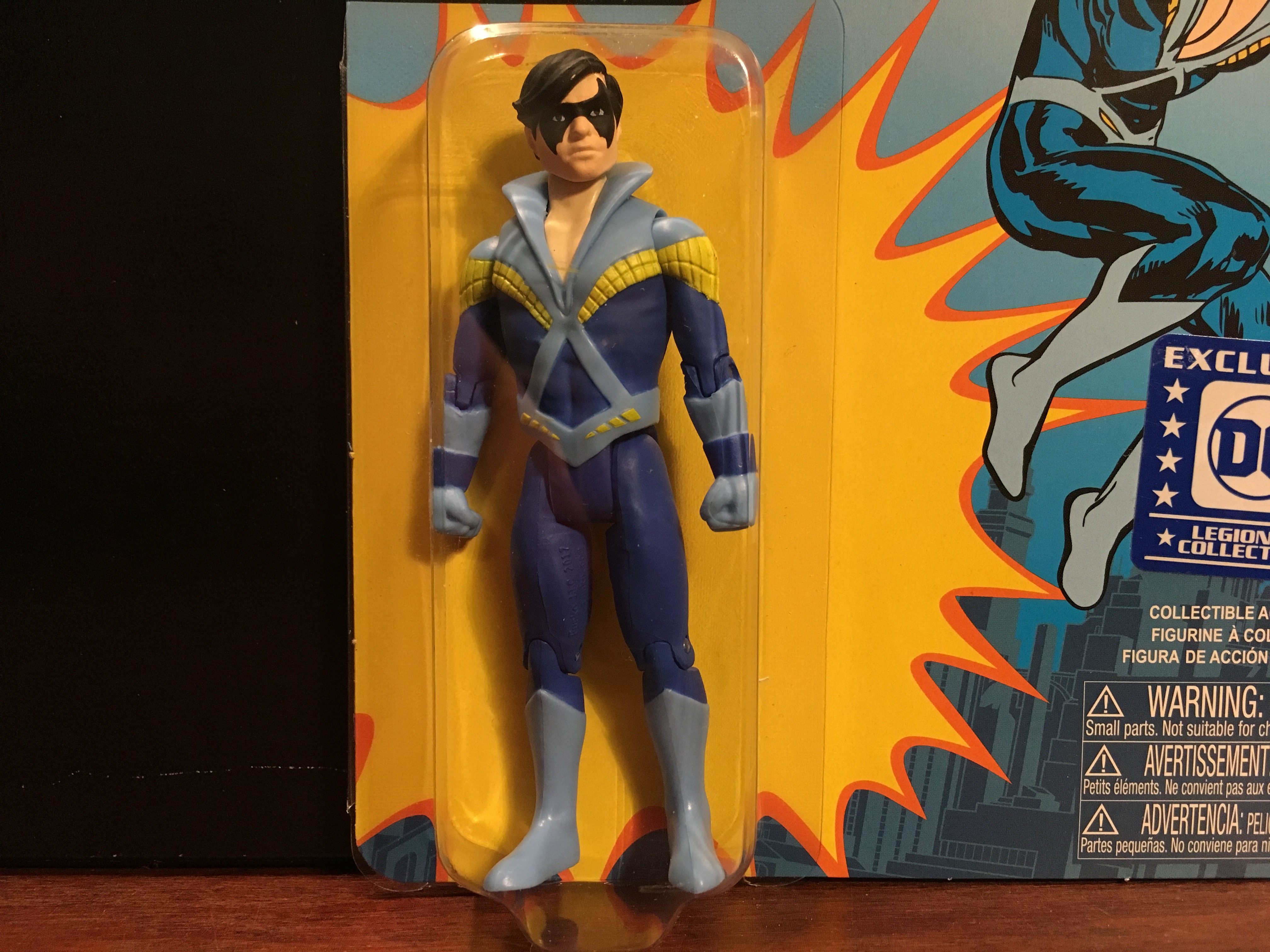 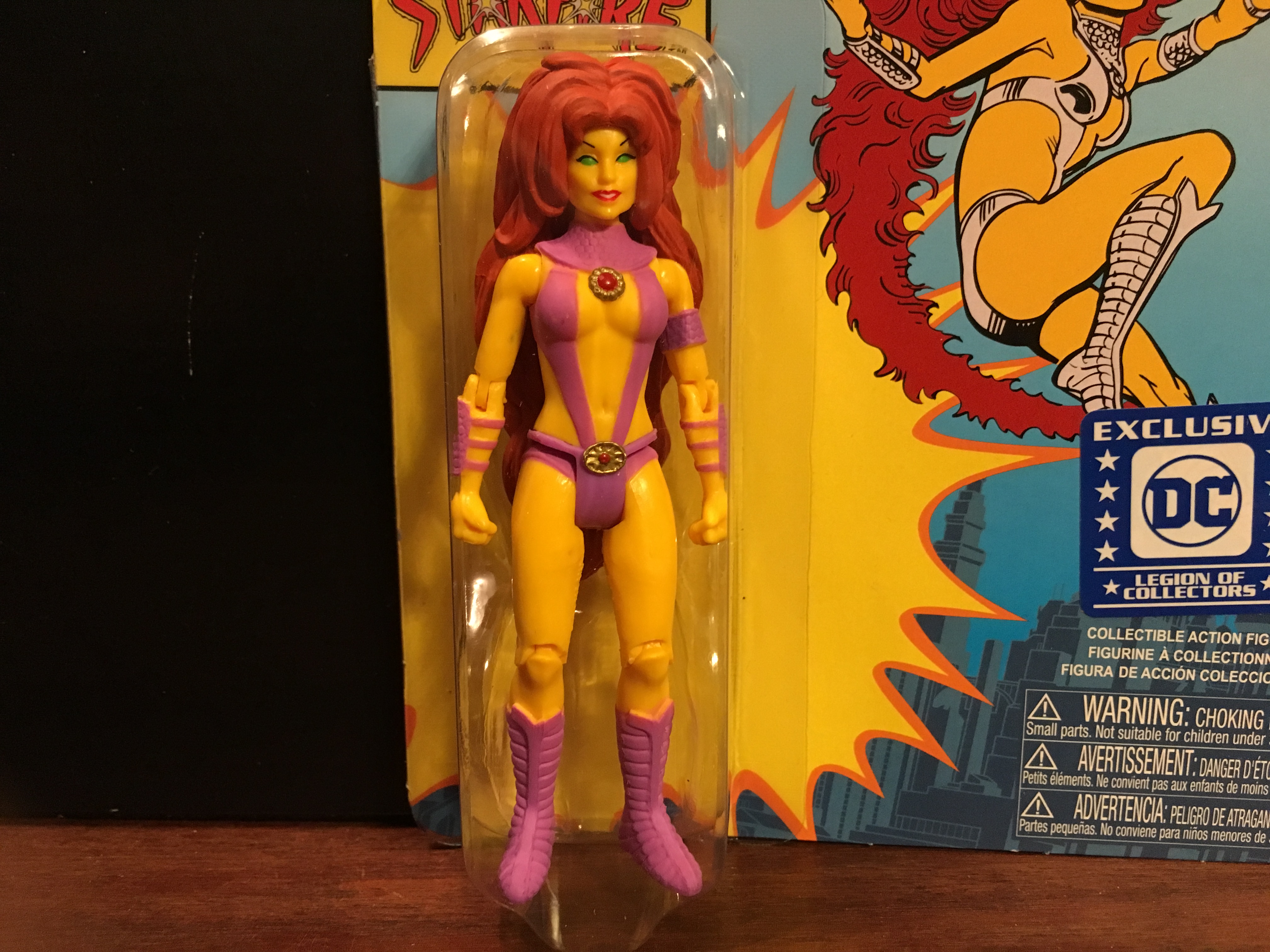 Funko’s Legion of Collectors mystery boxes are $25 each and are available directly through the company. Click here for more info. They also have Marvel and Star Wars offerings.