Inside ‘Samurai Jack,’ a Dream Job, by JIM ZUB — Plus EXCLUSIVE PREVIEW of #2

Home » Inside ‘Samurai Jack,’ a Dream Job, by JIM ZUB — Plus EXCLUSIVE PREVIEW of #2

Jim Zub‘s take on the modern classic cartoon continues with Samural Jack #2, out from IDW on Wednesday. Here’s an EXCLUSIVE preview — plus Jim returns to 13th Dimension to write about the project!

“Samurai Jack” the cartoon originally aired from 2001-04 and during its four-season/52-episode run it built an incredibly simple yet robust icon, a quintessential “wandering hero” serialized story. Eschewing the typical half-hour toy commercial aesthetic of kids’ cartoons, the animation approach on Jack was simplistically bold and the sound design favored long stretches without any dialogue at all, carefully building tension through the contrast of silence and punctuated moments of noise rather than a barrage of inane character chatter. Re-watching episodes now, it’s hard to believe the show is a product of the 21st century. It combines a sage-like confidence cultivated from tales of myth with the art style of UPA/Hanna Barbera from the ’50s and ’60s. 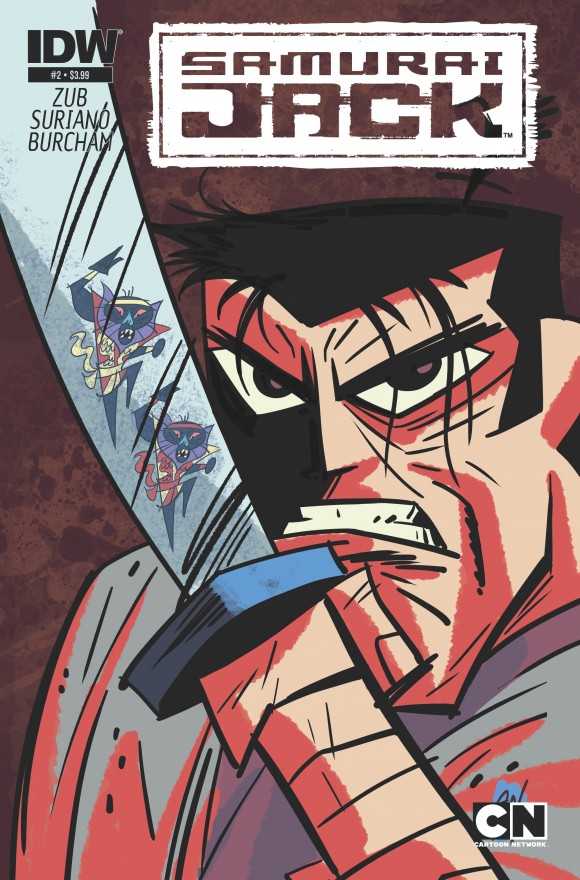 Genndy Tartakovsky and his crew created a foundation for Jack that acts like a gigantic genre melting pot; fantasy, science fiction, and mythic elements swirl together with equal parts Eastern philosophy and Western slapstick. The show embraced stories about self sacrifice and maintaining inner peace alongside others with Jack transformed into a chicken or fighting a farting dragon. Kids’ cartoons tend to target the lowest common denominator, but Samurai Jack always felt like it aspired to something more. Even its weakest episodes show more imagination and innovation than a dozen of its contemporaries. It covers an impressively wide range of themes and emotions, rarely pandering to any particular age group.

When the show wasn’t renewed for its fifth season in 2004, there was talk of a possible movie (animated or live action) to finish things off, but those plans still haven’t materialized. Almost ten years later, the kids who grew up watching Jack’s adventures on TV are now in college or are having kids of their own.

Picking up the torch and continuing Jack’s story in comic form is an absolute honor and also intimidating as all hell. I have a huge amount of respect for the “House That Genndy Built”. Creative projects that run the gauntlet against corporate expectations rarely come through with the kind of singular focus and style that Jack maintained throughout its run.

After high school my focus was on working in animation. I took courses in film, media, art, and classical hand-drawn animation, all focused on the goal of working for the story department at a studio some day. Over the years I’ve freelanced at several studios (and I still teach animation-related courses at Seneca College here in Toronto) but that elusive animation writing goal has been out of reach … until now. Bringing together my animation training with the creative freedom and immediacy of comics on a new ‘season’ of Samurai Jack in comic form is a dream come true. Working with Andy Suriano (the Emmy Award–winning character designer on Samurai Jack and artist on the new comic series) at the same time takes it to a whole other level.

Just because it’s a dream project doesn’t mean it’s easy. Watching my favorite Samurai Jack episodes again as I put together my story plan, I quickly realized the difficult task I was in for. Almost every single story has Jack thrust into a new locale against brand-new foes. Other than Aku the shape-shifting demon sorcerer (the series’ big bad) there are almost no repeating characters, locations, or threats. I wanted to tap into the genuine Samurai Jack “feel,” but it was a constantly moving target. The truth was that putting Jack in familiar locations or having him meet up with old friends/foes would go against the grain of what made the show great. Once I realized that, my whole perspective shifted. 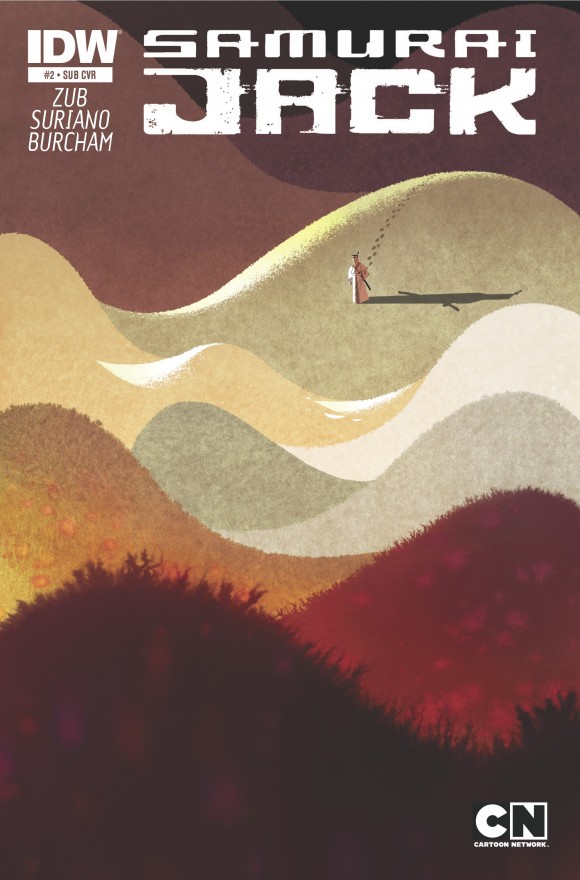 The best thing Andy and I can do is keep pressing forward – new places, new opponents, new challenges. Jack is our stoic heroic center and everything else must constantly change around him, testing his resolve. As long as we do that with gusto, we’re tapping into the spirit of what makes Samurai Jack great and the quest will continue.

The first Samurai Jack comic storyline is a five-part epic called “The Threads of Time.” Jack’s quest is reintroduced and refocused for old fans and new readers alike while we push into unexplored terrain. We’re building on the solid foundation put in place but aren’t afraid to try something different and unexpected. All in all, it’s been one of the most fulfilling and enjoyable projects of my career. I can’t wait for people to see what we have planned.

Sayeth the solicitation copy: “Jack can defeat almost any foe in single combat, but how will he fare against a pair of perfectly synchronized warriors who can exploit his every weakness? Cartoon Network’s hit animated series is back at IDW and bigger than ever.”

Zub writes, with gorgeous art by Andy Suriano, who also does the main cover. You also have a subscription variant cover by show creator Genndy Tartakovsky and variant cover by Riley Rossmo.

And now, more of the pretty: 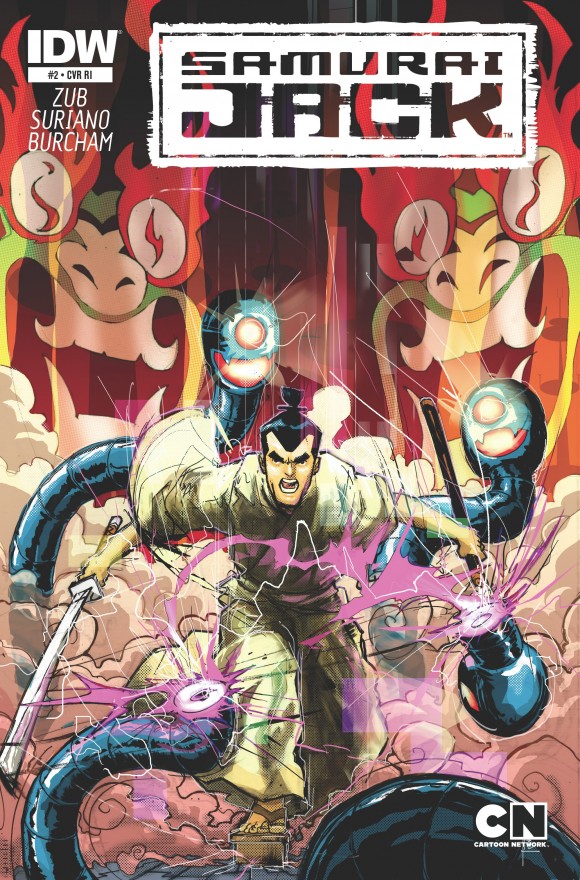 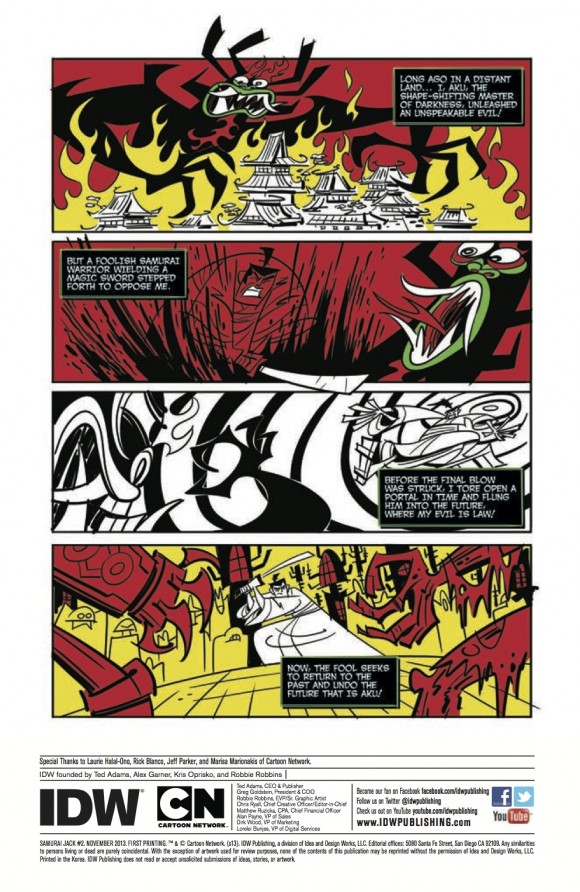 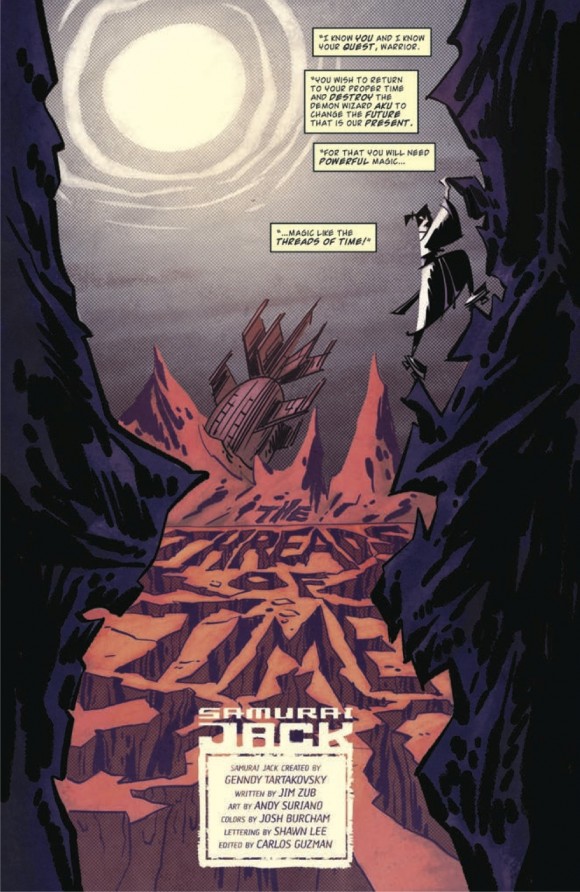 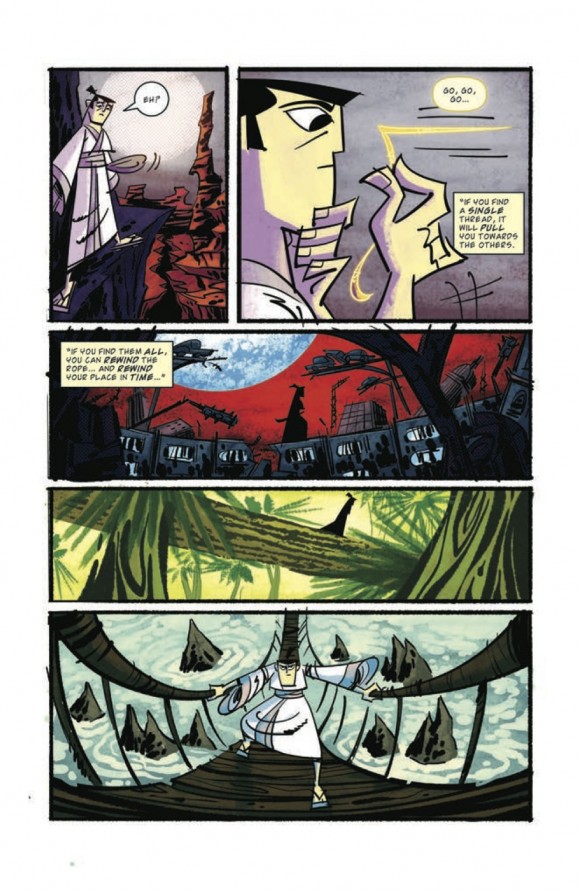 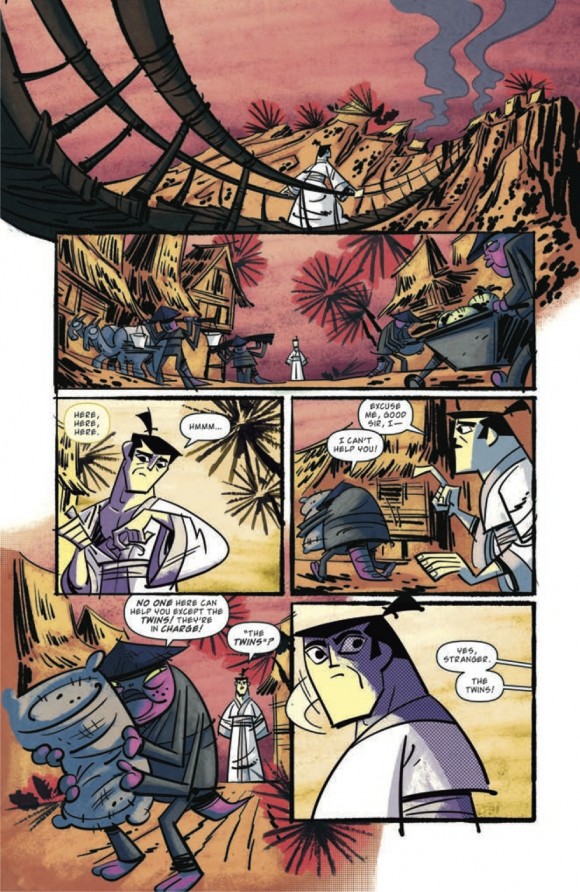 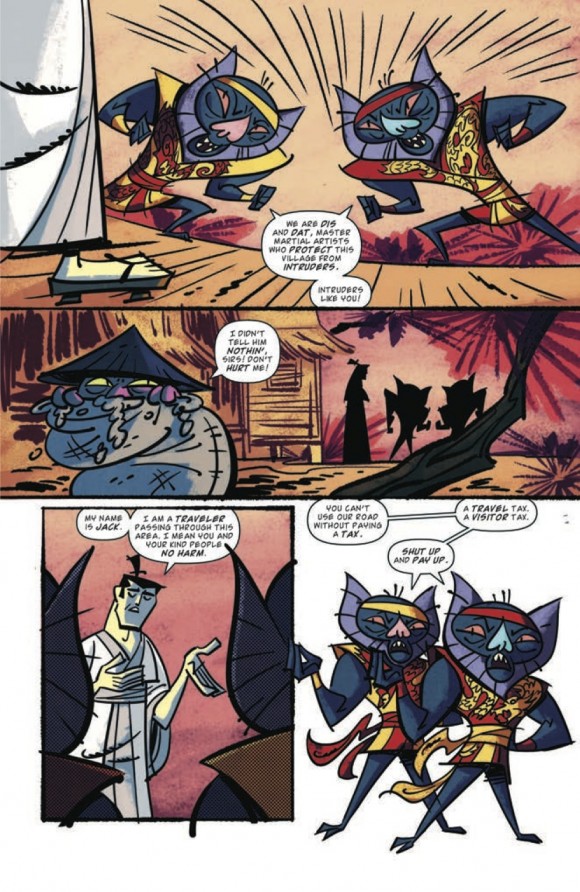 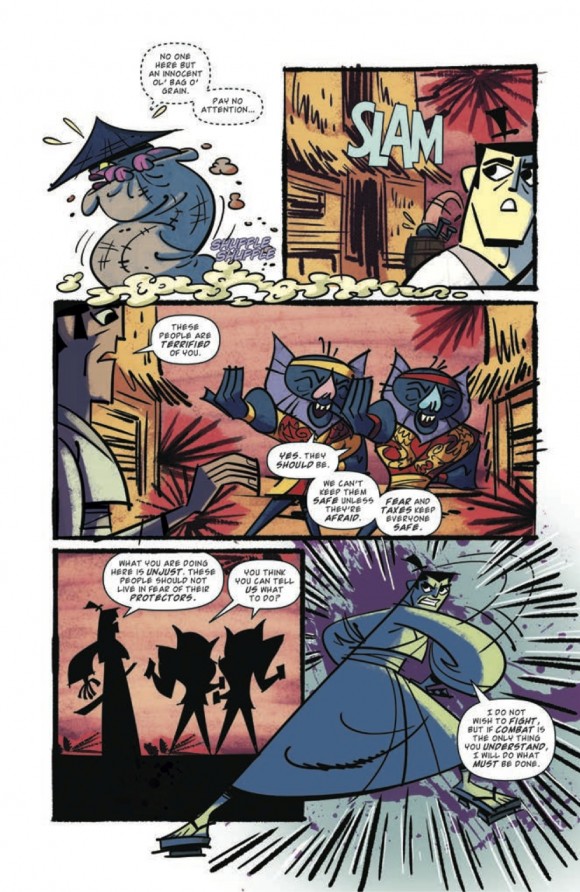 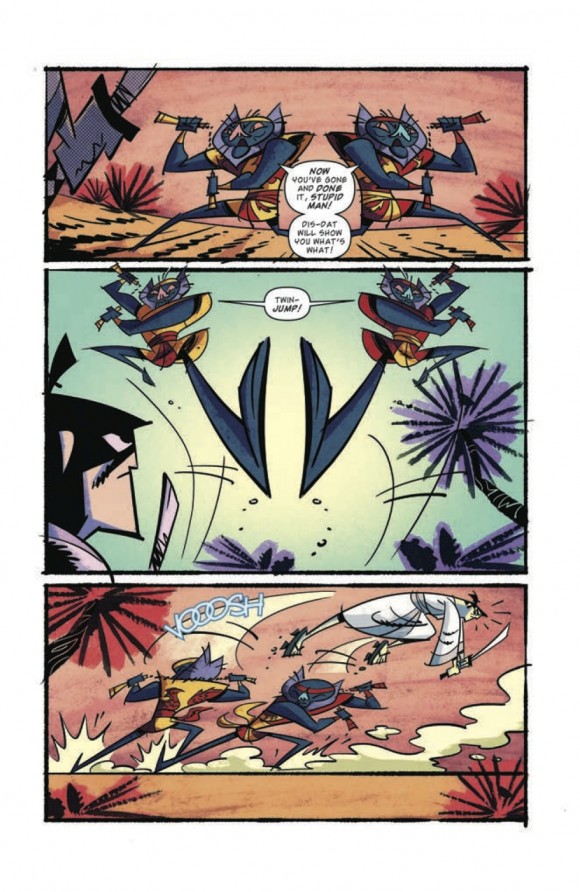 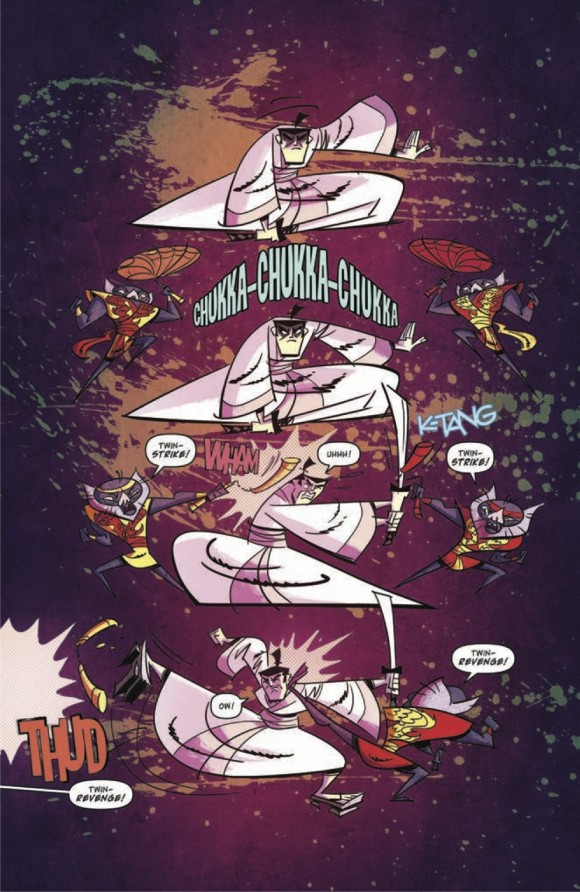 Jim Zub is a writer, artist and art instructor based in Toronto, Canada. He juggles his time between being a freelance comic writer and program coordinator for Seneca College‘s award-winning animation program.

His current projects include Samurai Jack; Makeshift Miracle, a modern-day fable; Skullkickers, a sword & sorcery action-comedy; and Pathfinder, a comic series based on the best selling tabletop RPG. He can be found on twitter at @jimzub and online via www.jimzub.com .