It’s our second BATMAN ’66 WEEK this year — but who’s counting when it’s in celebration of the first-ever home-entertainment release of the greatest TV show in the history of Batkind!

Please indulge me for a moment here, citizens.

When we started 13th Dimension a little over a year ago, I knew I would be writing a lot about Batman because he’s my favorite part of comics. I never intended to write as much about Batman ’66 specifically.

But it’s such incredibly rich material and the timing could not have been better. For starters, there’s been the Batcave full of merchandise that’s made its way to the shelves. Then, you have DC‘s critically acclaimed and commercially successful Batman ’66 comic book.

Finally, back in January, Hi Diddle Diddle, Smack in the Middle of our last BATMAN ’66 WEEK, Warner Brothers announced the show was finally — finally! — coming out on disc.

That news broke on the same day I profiled Burt Ward‘s daughter, a lovely woman whom I imagined had a lot of stories to tell as Robin’s offspring. She did. I spoke to Burt himself that night and actually broke the news to him that the show was being released — and he thought it was a hoax!

Here we are, 10 months later, getting ready to crack open those brightly colored boxes when they arrive Nov. 11. 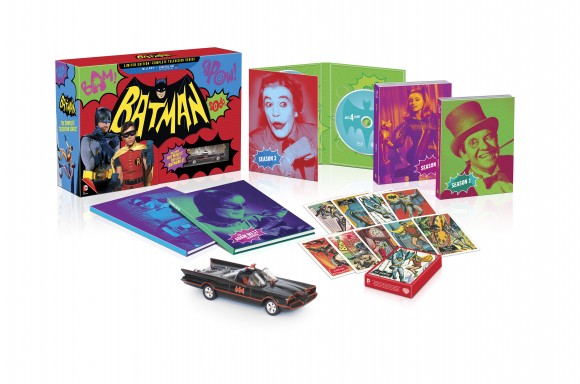 It may sound as corny as the show, but one of coolest parts about doing all this coverage has been meeting others who love this show as much as I do, from professionals to merchandisers to fans.

I’ve interviewed Adam West, gotten to know Burt Ward and have become downright friendly with Julie Newmar. I not only got to ride in the Batmobile twice, but the second time it actually came to my house and the owner, Jeff Breden, drove me to a comics show that we were sponsoring, the New York Comic Fest, down the road from my home. 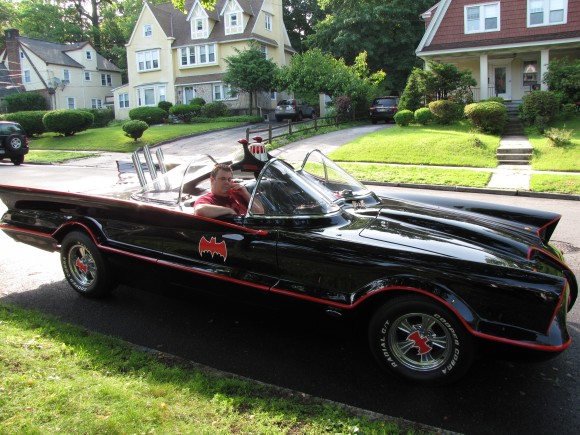 Yeah, that’s me. IN FRONT OF MY HOUSE.

I’ve talked to writers, artists and industry folk, too many to list here. And I’ve developed really great relationships with people on the manufacturing side of things like Steve Sandberg and Anthony Balasco of Figures Toy Company; Nick Croce of NJ Croce; and Chad Colebank of Tweeterhead; among others.

My wife, Wendy, says I’m living a charmed Batman life. My partner, Cliff Galbraith, says this has been my special Batyear.

They’re right. And I didn’t list all those people to name drop but to thank them.

Because, really, I’m just a fan. A fan with the opportunity to write about things I love.

So when I was trying to come up with a theme for this BATMAN ’66 WEEK — the last one I can reasonably see doing for a long time to come — it hit me:

The fans who kept this show alive — through bad times and good. The fans who, metaphorically speaking, kept the Batsignal lit for almost 50 years.

These five Batfans extraordinaire will take center stage this week in a series of interviews where they get to speak for all of us, speak about what they love — and what they don’t — about our favorite show.

I’ll also be teaming up with John S. Drew for five special episodes of his Batcave Podcast — starting Monday — in which we’ll discuss a variety of Bat-topics — and announce the winners of last week’s Batman ’66 contest (I hope you entered!).

To be sure, we’ll have some surprises along the way and this certainly won’t be the last time I write about the show.