An interview with the Queen of the Catwomen about life after Gotham.

Y’know, I’m really quite lucky. Since I’ve started doing 13th Dimension, I’ve been able to interview dozens of interesting people about work I admire. I’ve gotten to meet and talk to a lot of my childhood heroes.

But Julie Newmar is in another category altogether. 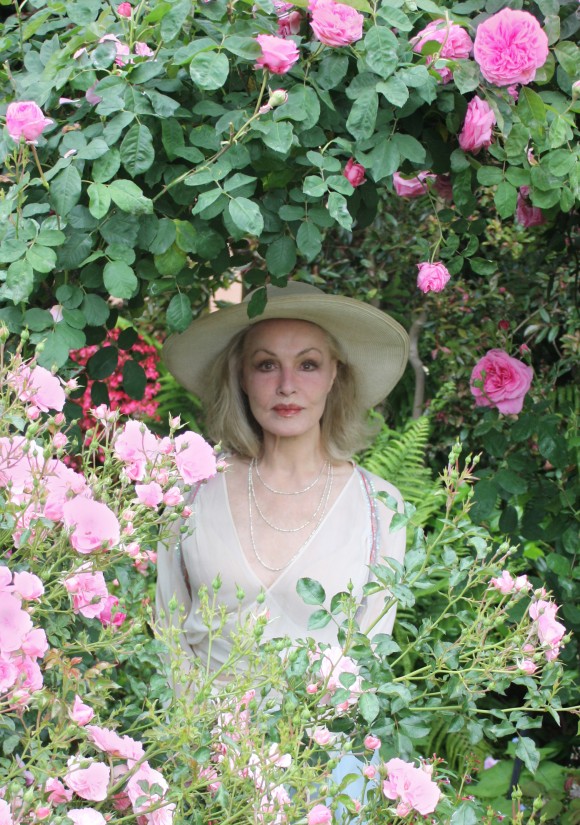 Since I made her long-distance acquaintance over the last year (me in New York, her in Los Angeles) she’s been inviting, funny and genuine. I’m deeply impressed by her kindness and her wisdom. And that fact that she’s an inveterate flirt is just extra catnip.

I’ll tell you a story. Last month, my family and my sister Paula’s family got together to see the genuine Batcopter at the State Fair at the Meadowlands in New Jersey. My sister adored Julie Newmar when we were kids. She would dress up like her version of Catwoman for Halloween. Paula wasn’t a Batgirl girl. She was a Catwoman girl. She still is. 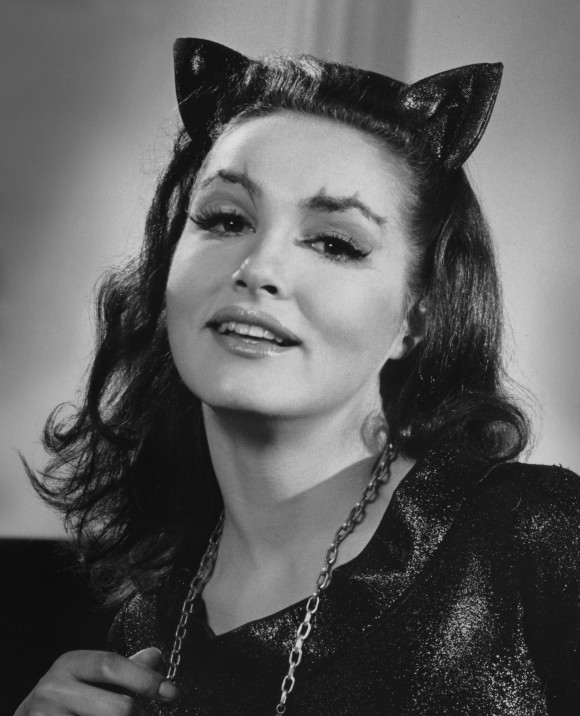 That morning I called Julie and asked her if I could impose upon her to say a few words to my sister when we met up later on. I feared I was tempting the fates, but Julie readily said yes.

So we get to the Batcopter, I dial the number and tell Paula, “I have a call for you.”

Paula let out a big gasp, flapped her hands like she had the vapors, blurted out “No!” and took a big step away from me.

I pushed the phone to her and said, “No, really, it’s Julie Newmar. Take the phone.”

I figured there’d be a few polite niceties and that would be that. 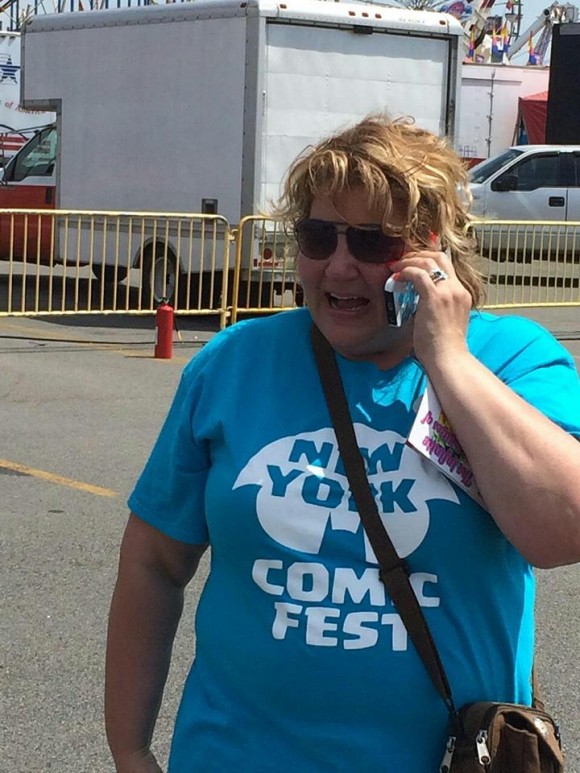 Paula on the phone with Julie

They talked for 15 solid minutes. Maybe even a little more, Julie asking Paula about what she was interested in, what my niece liked to do. I overheard them talking about art and creativity.

What it showed was just how remarkably classy Julie Newmar is. How warm-hearted. How curious she is about other people.

But I also wanted to talk to her about what she’s up to now, what her life is like away from Catwoman.

It involves art and gardening and writing and, without putting too fine a point on it, philosophy. She does web videos about gardening as well as other interests.

Today is Julie Newmar’s birthday. I’m not gonna tell you which one because a gentleman never asks. That’s what Google is for. But here’s a somewhat condensed version of our half-hour conversation. 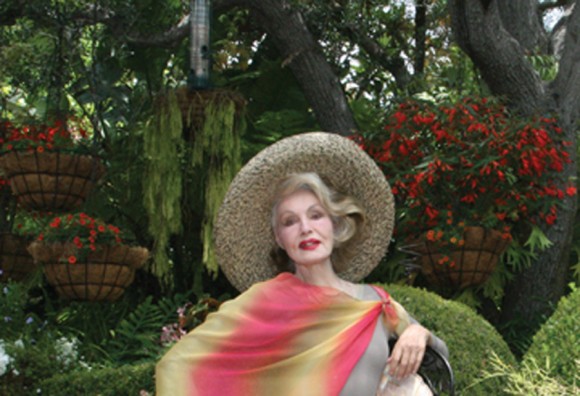 Dan: I know you do a lot of different things. Tell me how you spend your time these days.

Julie: Last month I had a lecture, “How to be a Great Beauty Even Though You Think You’re Not One.” The papers in London picked it up. They liked the story so much, they put me on the cover, which was very pleasing.

And so what else am I doing? I like making garden videos because I think that’s what dancers do, that’s what choreographers do. After a certain point, you have to choreograph the garden … or things. Do you know what I mean? You have to create beauty in motion. 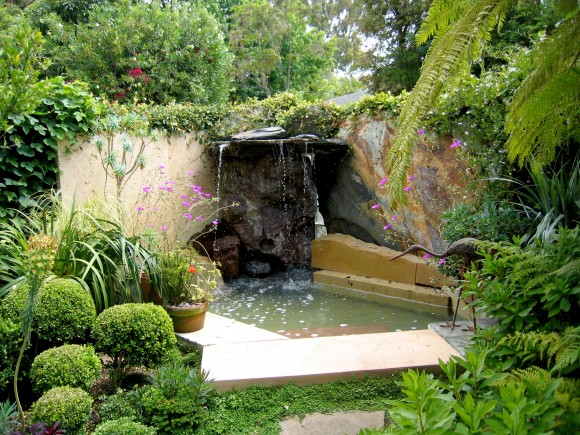 So my take on the world is, is it beautiful? OK? Is your movement beautiful? Are you beautiful in your treatment of others? Do you bring comfort to others by beautiful actions? And dance, of all things, is capital-B beautiful! 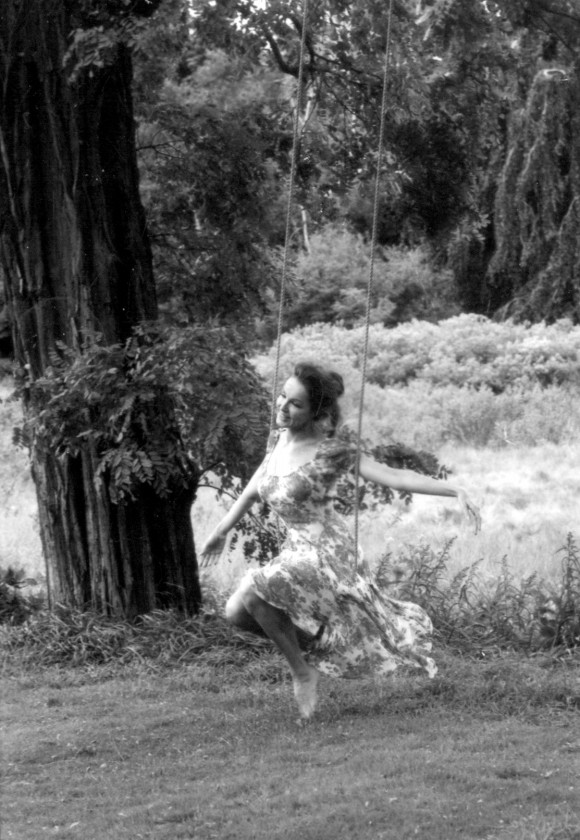 Dan: And how does that relate to gardening and choreographing…?

Dan: How much time do you spend doing that?

Julie: My eyeballs take up all that time. Whenever they’re open I just drink in this extraordinary … this Earth we live on! I’ve got it right here, right in the palm of my hand almost! Every morning I walk in the garden. If I take my time it takes a full hour. You tune up your soul!

You see? You get things right. You solve dilemmas; you forgive your enemies in the garden. Things turn upright. You believe again. You’re on the go again. Life is rewarding. It’s ever-blooming. Every day there’s something new that’s blooming outside for me… You know, I have a rose named after me and a day lily and a begonia and next year it will be an iris. 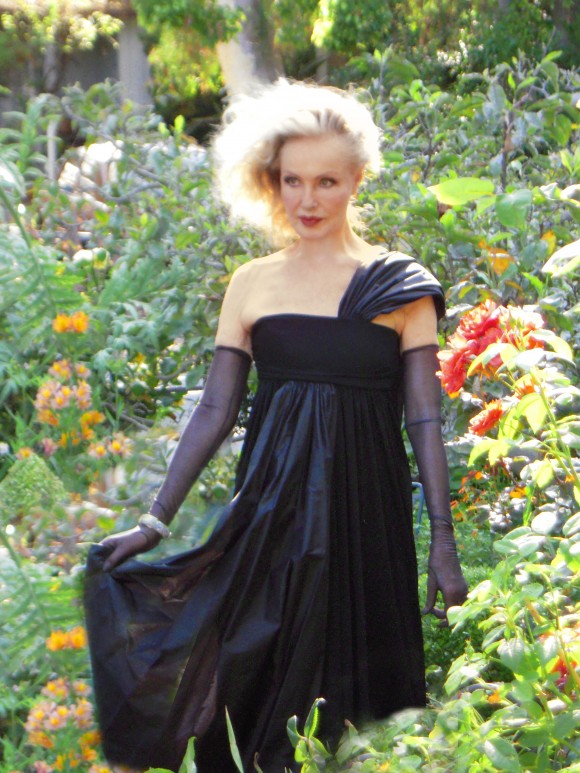 Dan: Who names the flowers? How does that work?

Julie: Oh, it’s just the amount of love that you show for “the thing” and so someone hears you who’s involved with “the thing” and they say, “Can we name this rose after you?” and sure enough, there it is in all the major gardens in America (Julie laughs) and it’s wonderful!

Dan: Now, I know you’ve been writing and you continue to write. What are you working on now?

Julie: I also have a business. Today’s sort of about business. I’m in real estate. That’s how I support myself and my family. And in real estate, I’m a backer of creative artists, whether they make hats, sell couture or run small theaters. I have a new cafe coming on board on Fairfax, which is the hottest block in L.A. these days.

Dan: Tell me about that.

Julie: Well, they just sent me some photographs of some graffiti. Out here in L.A. graffiti is … it’s art. So I say that with not too many misgivings. They wanted my opinion about “the graffiti.” But graffiti here is vibrant! It’s art in the streets. It’s the invention of… It’s certainly more than politics. It’s very vibrant. As a matter of fact, our museums feature it!

Julie: Oh! Banksy! Are you crazy, are you kidding? I own a…well, I don’t OWN a Banksy, I got (a print). … I blew it up and put it on my wall. … She looks like she’s wearing a… You can only see her eyes. Everything else is covered. It says, “We are you.” So, I like that. “We are you.” … When you see the whole world is one, then you realize we all have all of these feelings and it does make sense. It’s good to incorporate other people’s feelings or at least know about them. (She later rightly pointed out that the image, below, resonates with what’s going on with the Israeli-Palestinian crisis.) 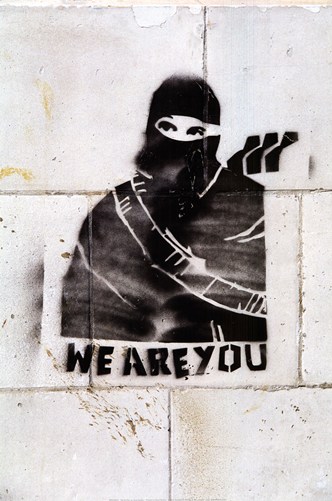 Dan: Tell me more about the cafe.

Julie: It has movable stages and it can have yoga in the morning, it can have dance class for youngsters in the midday, it has free art along the walls, it has performances at night, comedy theater, and then there’s the cafe in front. … It’s been a year they’ve been working on this. They’re putting their hearts and lungs and soul into this place.

Dan: You’re an investor? Is that how it is?

Julie: Oh, no. Worse than that! I own the building! (Dan laughs) In that sense, I am an investor, yes.

Julie: Occasionally to the conventions, which are so much fun. My God, I enjoy myself so much! And I usually bring my own camera and take pictures of the people who take pictures of me, and I put them up on Facebook. They’re quite adorable. 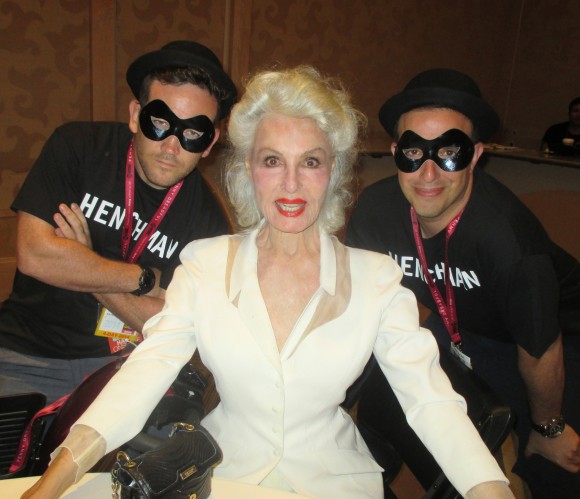 (This portion I excerpted in a different column but it informs the rest of the conversation, so here it is again… )

Dan: Can you tell me one of the more interesting stories or something that’s happened to you at one of the conventions?

Julie: Yes! A man walked up to me with his son. He was dragging his son behind him. And he said to the son, “Wait! You’ve gotta see! She’s wonderful. She’s terrific. This is Catwoman!” He’s trying to explain and the little boy is just the age where he hides behind his father’s pants leg. He won’t come out. And he keeps trying to convince this kid that, “Someday you’ll see what I mean about Catwoman!”

And as that’s happening, the grandfather walks up from behind the two of them, walks straight beeline, right straight up to me and says, “Miss Newmar, you were my first turn-on!” 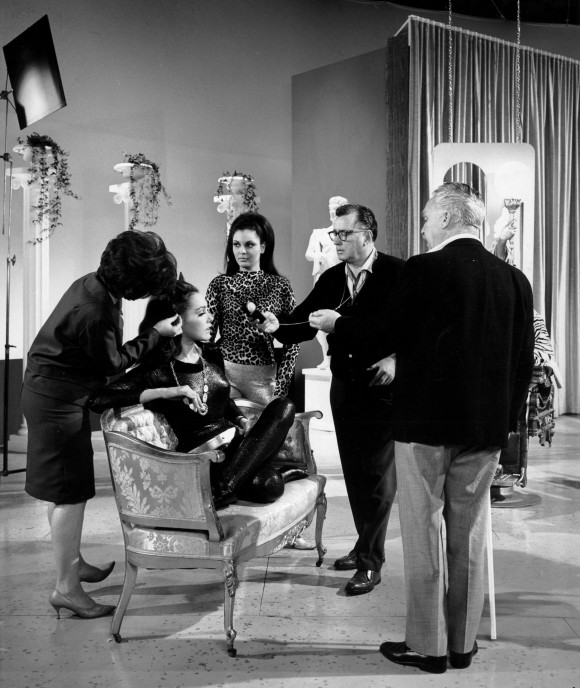 Dan: (Laughing long and loud) What do you SAY to something like that?

Julie: Oh, God bless people. God bless the human race! (Dan laughs) Are we any better than what we are? No. We’re just magnificent. Son, father, grandfather. I’m so fortunate to be in this position to receive so much warmth and affection from people. I tell you, I am bowled over.

That’s what happens to me on the street. Men walk up and say that to me and it’s turning into a book now, which I will probably debut on Facebook. I think Facebook is the diary that we never kept.

And Facebook is experimental lifehood, you know? So the book will be called First Fantasy and it will be stories told to me of, “Who was the first person who lit your fire?” 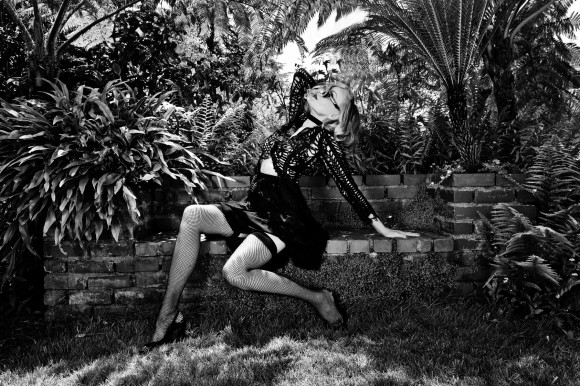 Dan: Are you going to publish it as a book or publish it on Facebook?

I’m having so much FUN in my life now. I’m not working for anyone. I’ve been self-employed since I was 50 years old so I can do absolutely what I want and no one’s my boss. I don’t have to scratch. Money’s not a problem so I can just allow life to unfold for me on a daily basis. I get impulses and sort of lightning-like thoughts and ideas on what to do the next day.

What to make happen, what to bring to fruition.