EXCLUSIVE: A major metropolitan newsroom for your 8-inch, Mego-style figures… 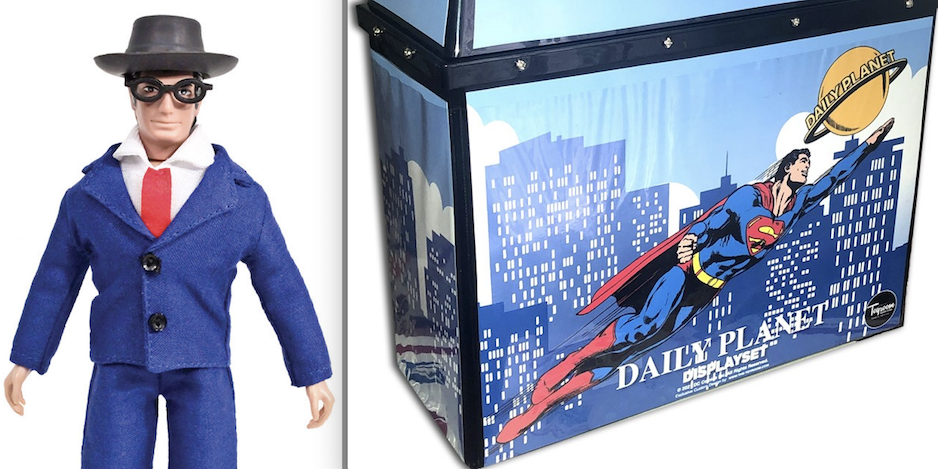 Customizing king Anthony Durso of The Toyroom has been on a roll, with a number of new Mego-scale playsets available in time for the holiday season. (Order now!)

The latest? The long-awaited Daily Planet, which is one of most detailed — and humorous — of all of Anthony’s roughly three dozen available sets.

So dig this EXCLUSIVE INSIDE LOOK, in which Anthony takes you on a guided tour of the Planet’s Easter eggs — and how they pay homage to classic comics, cartoons and films, dating from the Golden Age all the way to the Modern Age. 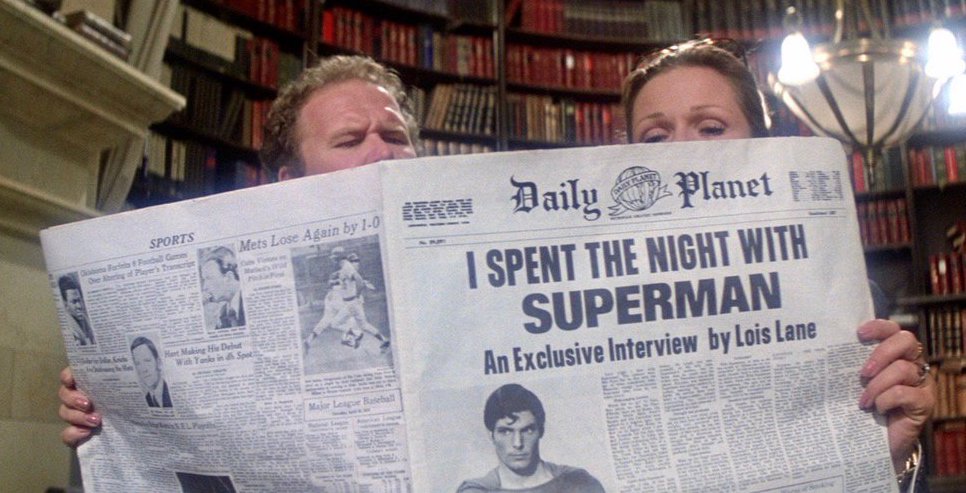 “This one gave me some headaches,” Anthony, who is also a 13th Dimension contributor, admitted right off. “How do you make desks exciting as a playset? And how do you encompass 83 years of history and multiple versions of that great metropolitan newspaper? Great Caesar’s Ghost! Newspapers aren’t even relevant anymore!

“Basically this became a mash-up of all eras and media… while keeping it old-school simple as much as possible,” he continued. “It’s still a daily, print newspaper in my mind. Not an online blog. 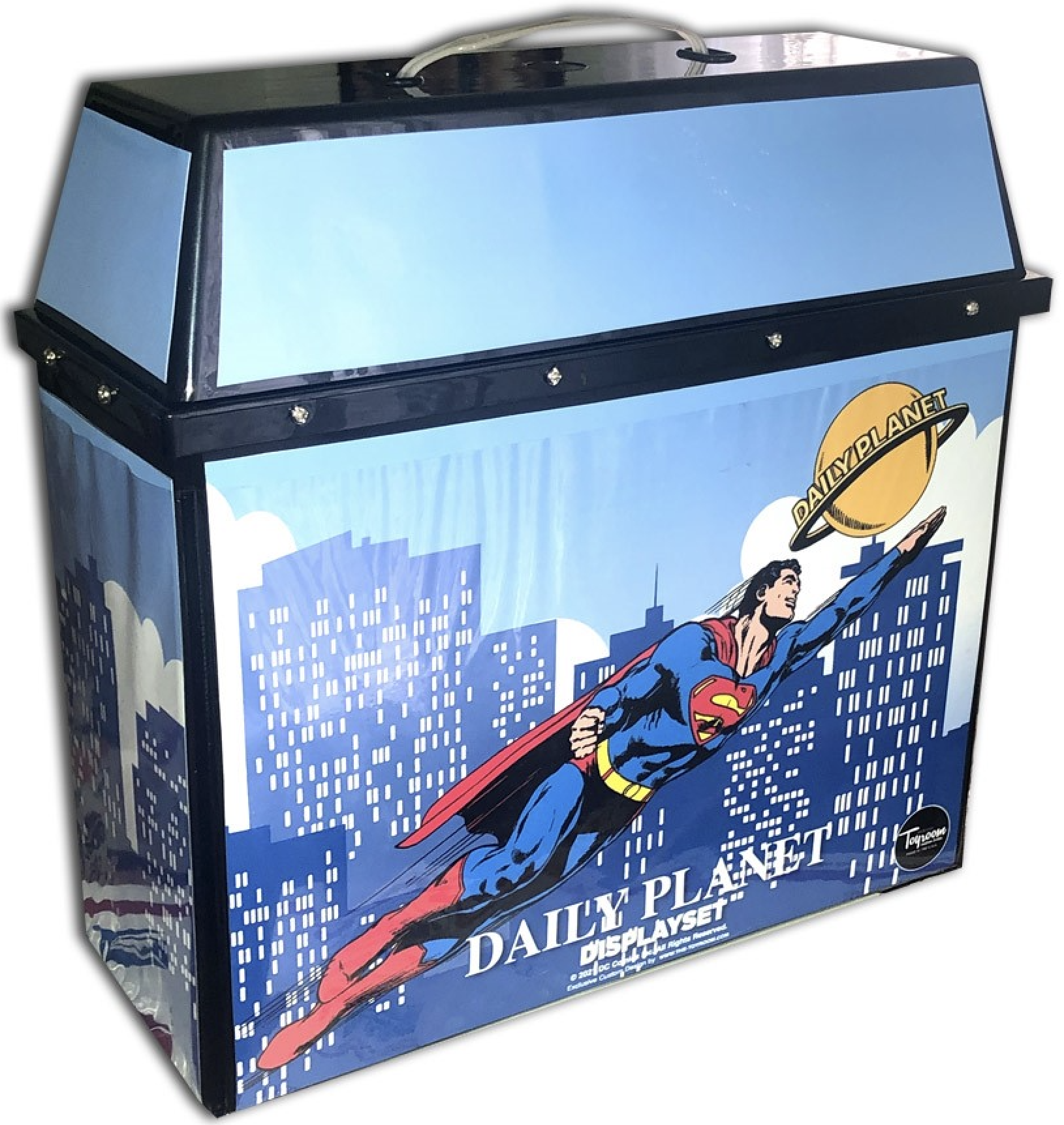 “First up, the exterior: Neal Adams’ Superman (from Superman #252) flying over the big city of Metropolis and giving the on-lookers at the Daily Planet Building a cursory glance,” he said. “I did work on, but eventually scrapped, artwork for the front with Clark Kent, Lois Lane, Jimmy Olsen and Perry White in front of the building doors but really the most iconic thing about the Daily Planet Building is the, um, giant planet that sits on top. And that wouldn’t be possible to convey with a one level playset like I originally envisioned. Thus, the change. 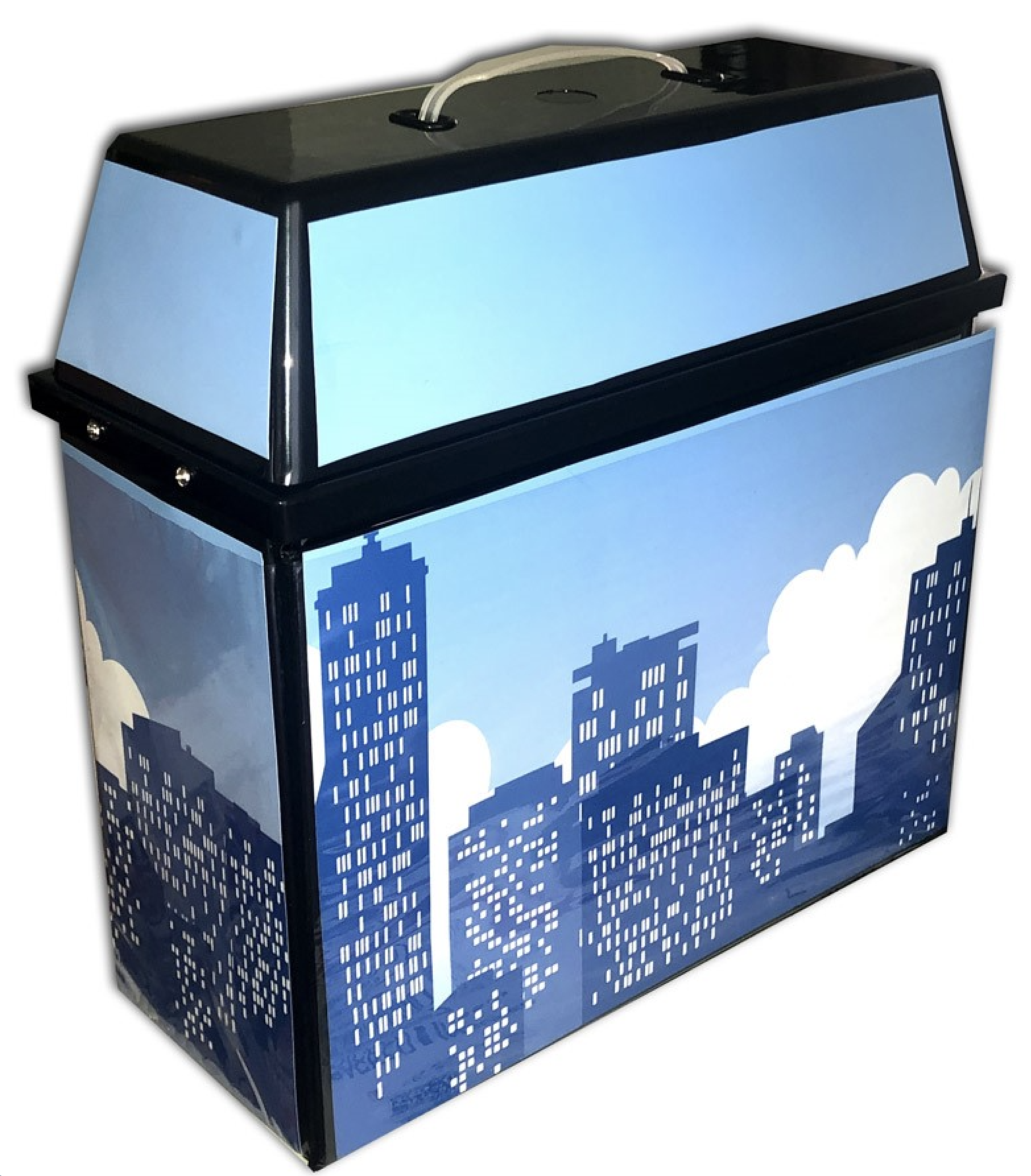 “Once you enter the building, there’s the waiting room couch, with giant framed famous Planet front pages hanging over it,” he pointed out. “From left to right, they represent The Adventures of Superman (1952), Superman: The Movie (1978), Superman (1948 movie serial) and the Fleischer Superman cartoons (1941). On the couch is the Daily Planet Special Edition tie-in to DC Comics’ Invasion! mini-series (1988). (The color scheme/design of the Planet walls is inspired by those from The Adventures of Superman TV series.)” 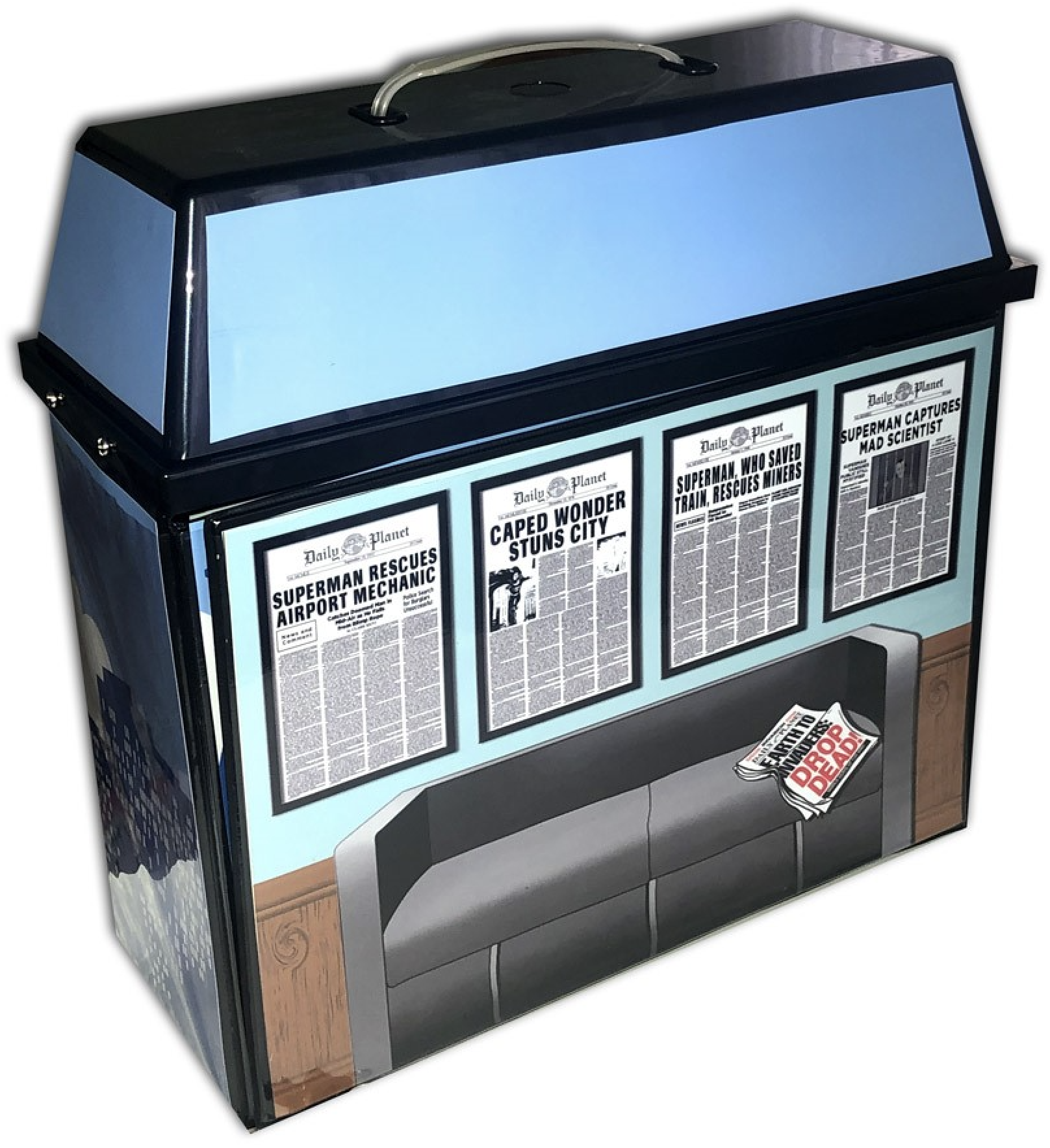 But the highlights of the set are Lois and Clark’s desks, which are jammed with all sorts of cool references.

Here are Anthony’s guide’s to each: 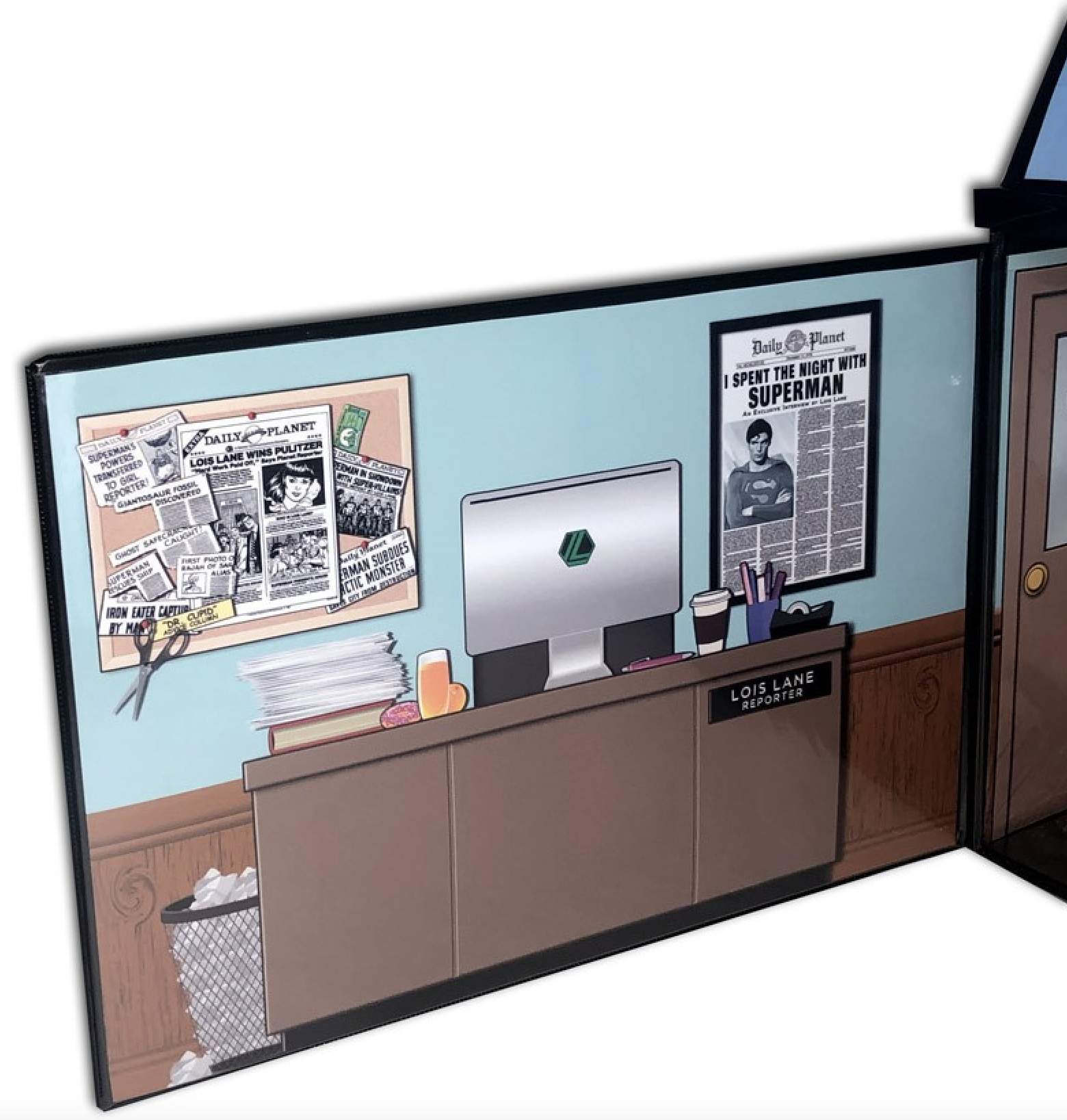 1. Coffee cup. Lois is ALWAYS on the go.

2. Purple is Lois’ signature color (it is, look it up)… so it’s fitting that all of her writing utensils are purple.

3. Headlines on the bulletin board are Lois Lane bylines from years of comic stories as well as the Fleischer cartoons and the Filmation cartoons (1966).

4. Also lifted from the comics is Lois’ name plate from when she was an advice columnist (Lois Lane #45) and a Superman Marriage Dollar (Lois Lane #61). 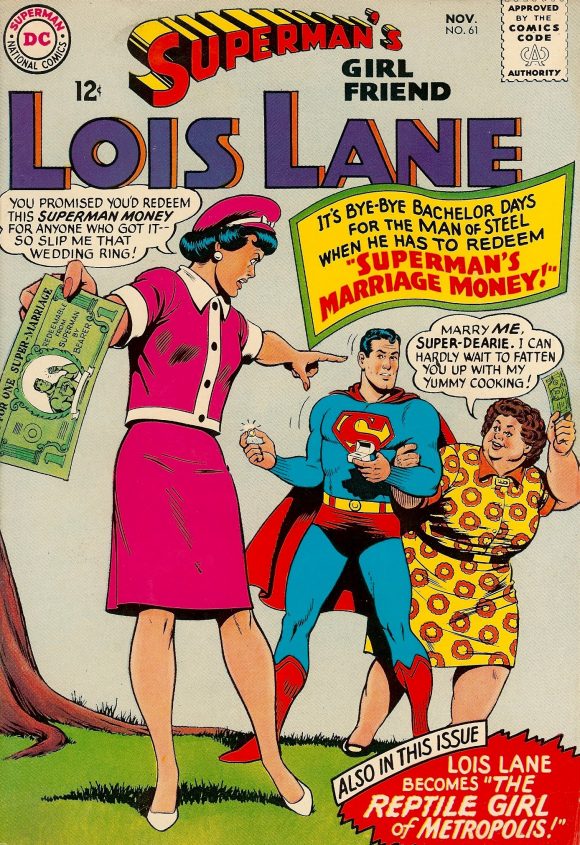 5. Lois is messy. That’s why she can’t find the dictionary under the pile of papers (She’s also a terrible speller.)

7. Scissors on the bulletin board aren’t for cutting newspaper clippings. They’re for trying to cut Clark Kent’s (invulnerable) hair to prove he’s Superman.

8. Overflowing trash can. Again, Lois is messy. But she’s also a perfectionist and is constantly doing re-writes for that perfect story. 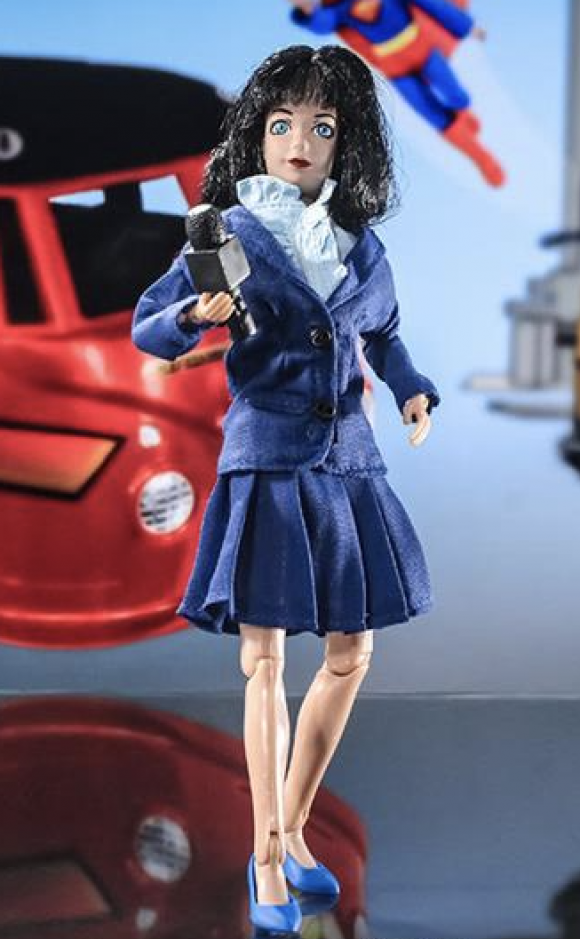 9. This trait pays off, she won a Pulitzer, after all.

10. Lois uses a LexCorp desktop computer. Tech, but not too high tech.

11. And, of course, Lois’ biggest story of her career was her infamous Night With Superman (Superman: The Movie). 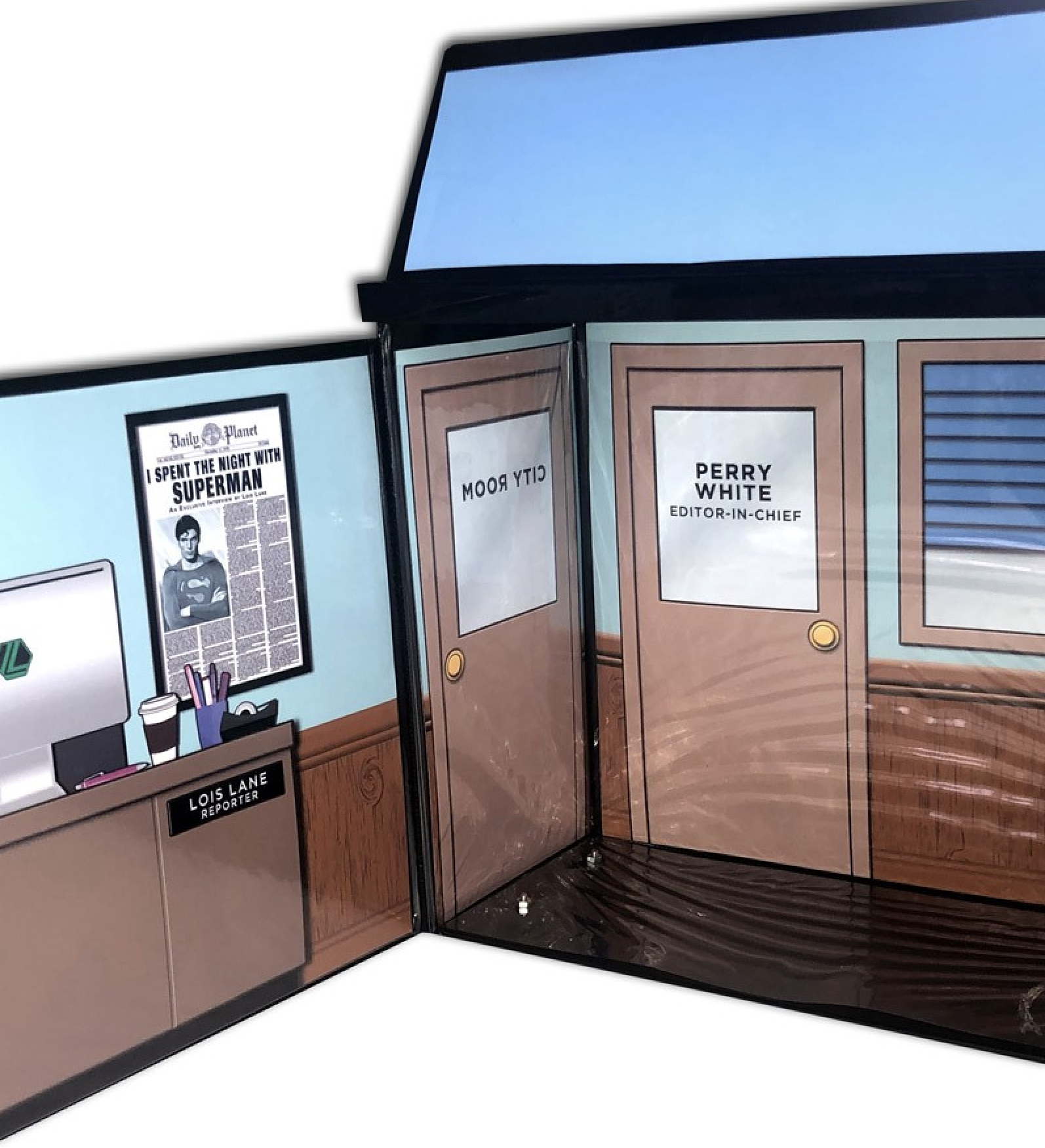 1. Clark is much more down to earth than his counterpart across the way. He doesn’t use a computer (he does have a SUPER memory after all) and instead writes his scoops on a typewriter. While Lois is a perfectionsit, Clark is, well, perfect. No re-writes filling up his trash basket.

2. In addition to the typewriter, the old-fashioned telephone is a nod to the George Reeves’ version of Clark Kent.

3. Clark is also a reporter for WGBS-TV and always has a microphone ready to go on his desk. 4. Hmmm, it seems that Jimmy Olsen left his camera on Mr. Kent’s desk. See, Jimmy doesn’t have an office. The “Chief” won’t allow it! And Jimmy knows better than to leave his camera on the blackhole desk that’s Lois Lane’s.

5. Since Clark doesn’t have to worry about his diet (Kryptonian metabolism and all) he eats at Big Belly Burger A LOT.

6. Did I mention Clark is down to earth? Probably has a lot to do with his upbringing on the Kent farm in Smallville, Kansas. Clark likes to look at the old picture of him and his adoptive parents, Jonathan and Martha Kent. It keeps him grounded and reminds him that even though he has powers and abilities far beyond those of mortal men, at heart he’s just an old farm boy. Shucks.

7. It’s a given that 99 percent of the Superman stories featured in the Daily Planet are written by Lois Lane. Trust me, I did the research. So what does Clark do? Well, he has enough inside info that he can write about OTHER super-heroes in the DCU. (Headlines taken from the old Daily Planet pages in DC Bronze Age comics). Every once in awhile though he does get a juicy Superman scoop (like the “Kryptonite Nevermore” headline from Superman #233).

8. There’s a permanent sticky note reminding Clark of his date with Lois. The never-ending battle indeed. — Perry’s usually in his office. Until he barges out, looking for Lois, Clark or OLSEN!!!!!! 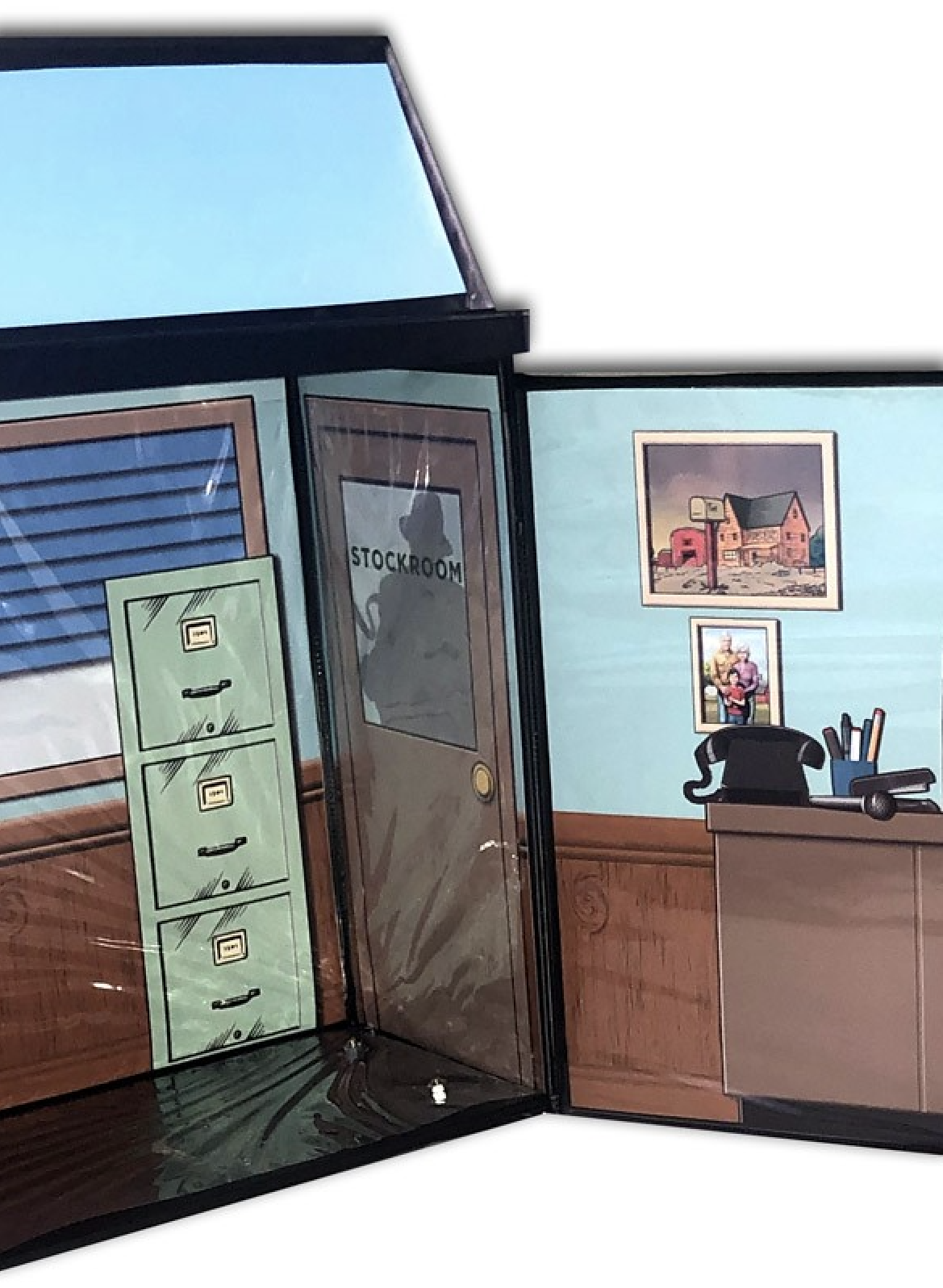 — This door is locked quite often it seems… 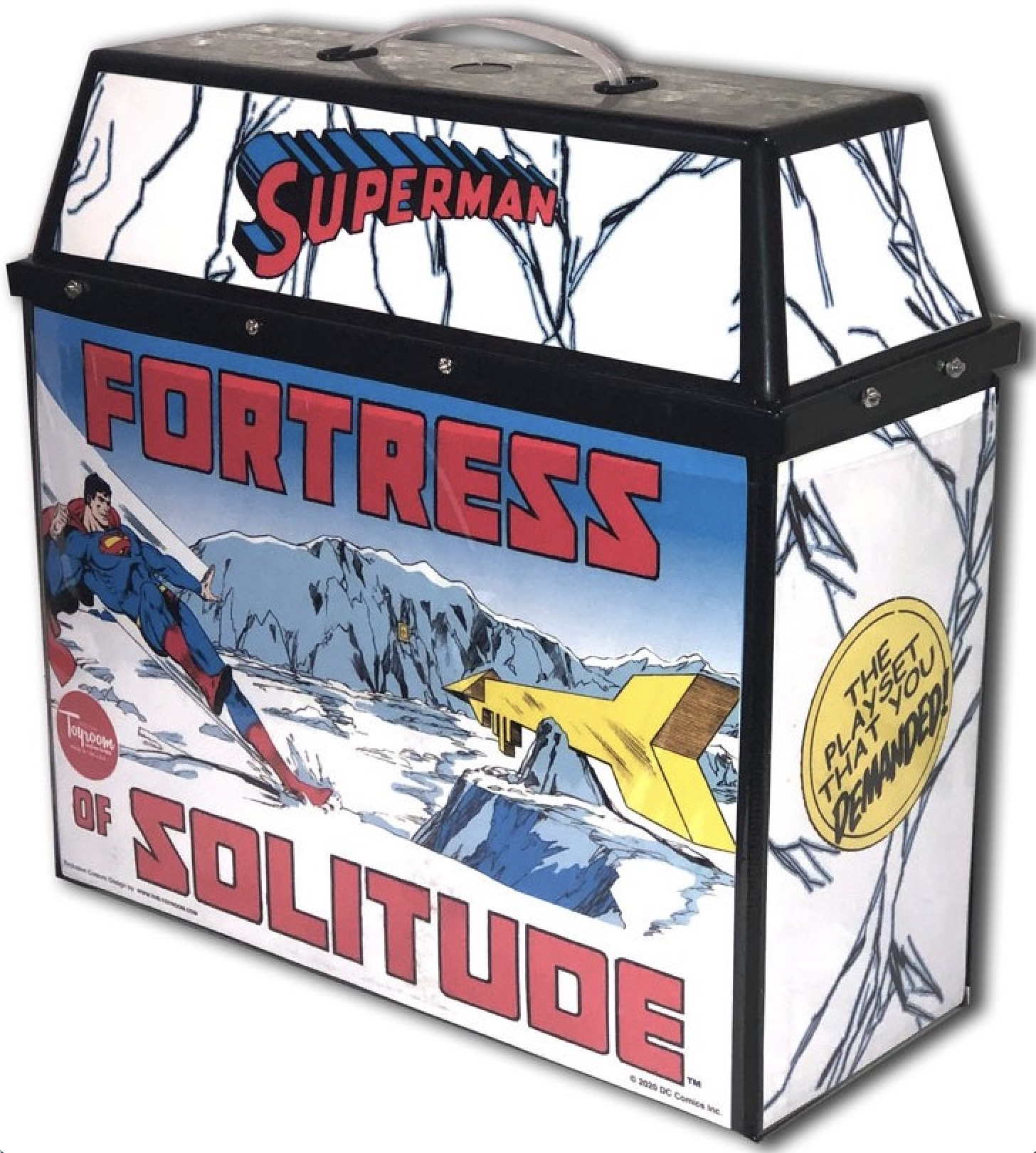 — This set obviously goes best with your Mego-scale figures but Anthony worked so hard on the details that it stands on its own as a Superman tribute, suitable for any number of toy lines.

— Also: This would not only go well with Anthony’s Fortress of Solitude (click here) but Figures Toy Company’s Daily Planet van, as well.