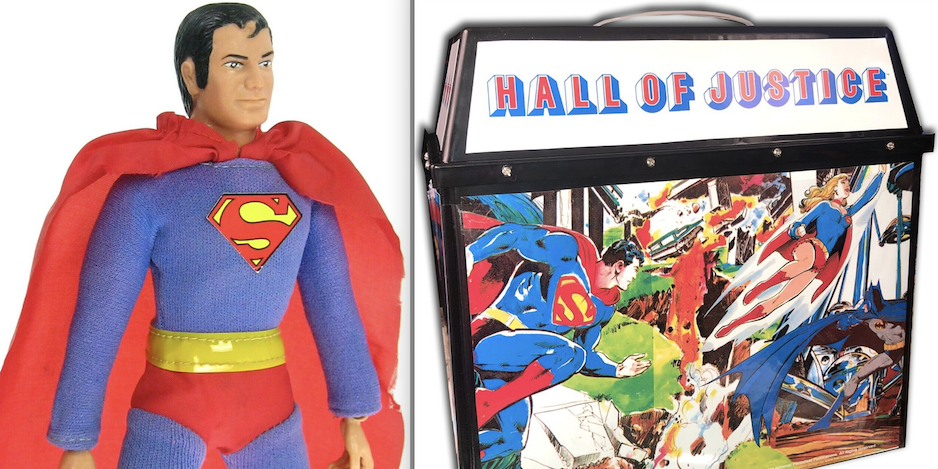 I was so honed in on Batman as a kid that so much other groovy playstuff completely escaped my notice. For example, I completely missed the opportunity to get the Mego Hall of Justice — which is probably just as well, as far as my Mom’s wallet was concerned — leaving Superman, Aquaman and others with no place to hang their capes or fins.

Anyway, just as he did in 2020 with the beloved, rare Wayne Foundation, customizing king Anthony Durso of The Toyroom has revamped the classic Hall of Justice layout and brought the heroes’ HQ back as one of his many popular displaysets.

In both instances, Anthony took Neal Adams’ original artwork and made it fit the standard displayset case — so dig this EXCLUSIVE INSIDE LOOK, along with Anthony’s commentary: 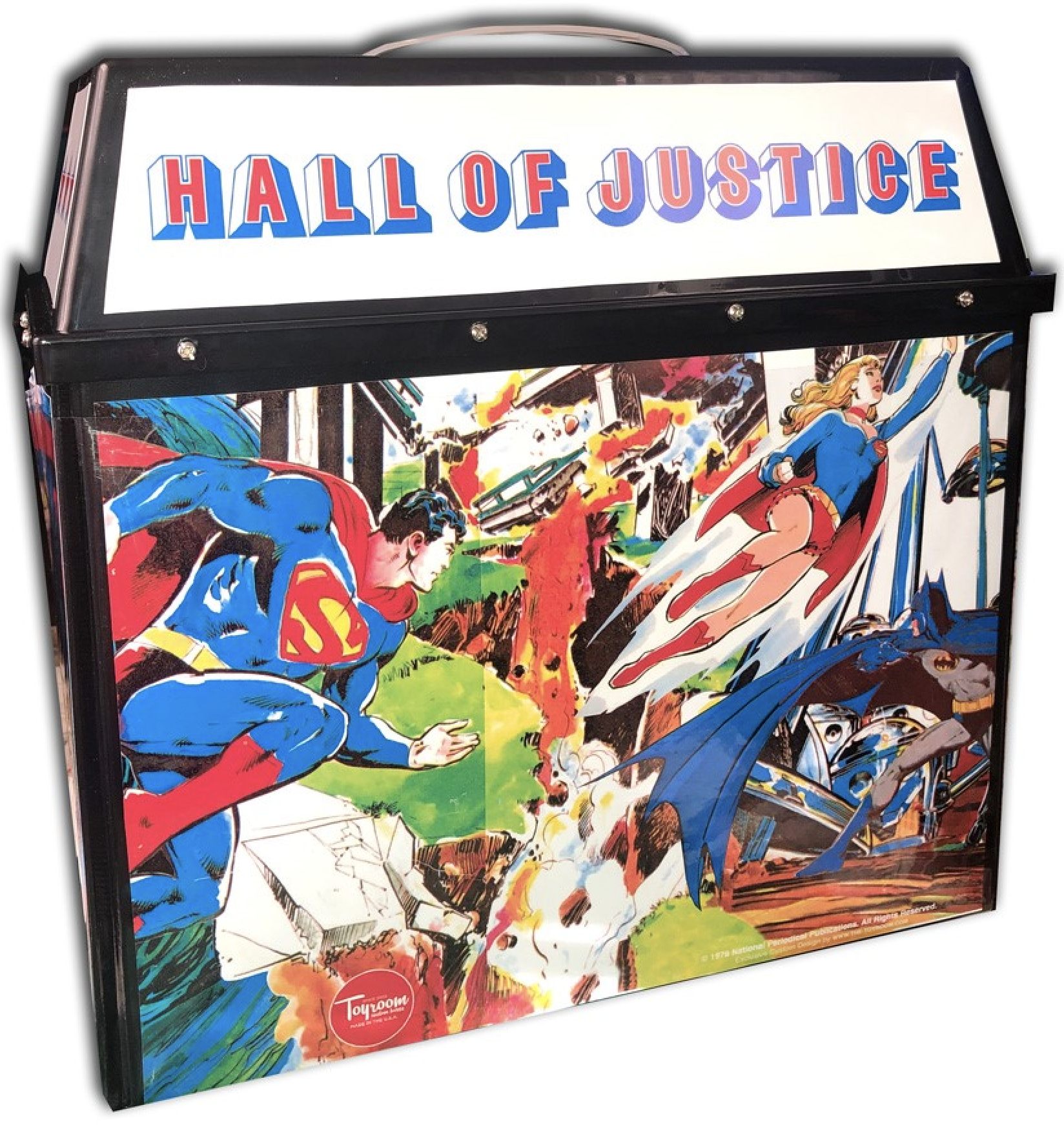 “When I first made my (cardboard and laminate) Fortress of Solitude back in 2008, I based the size and style off a beat up Mego Hall of Justice playset that I had purchased,” Anthony, who is also a 13th Dimension contributor, explained. “If you know anything about this playset, it had a plastic mechanism inside that allowed you to place a figure in a chamber, which would then ‘magically’ appear in a view screen at a disaster scene at the slide of a lever. Needless to say, by the time I bought this second hand, the device didn’t work and would come off the track. But I kept it all these years because eventually I thought maybe I could adapt the artwork to another format. Which is what I finally did this week. 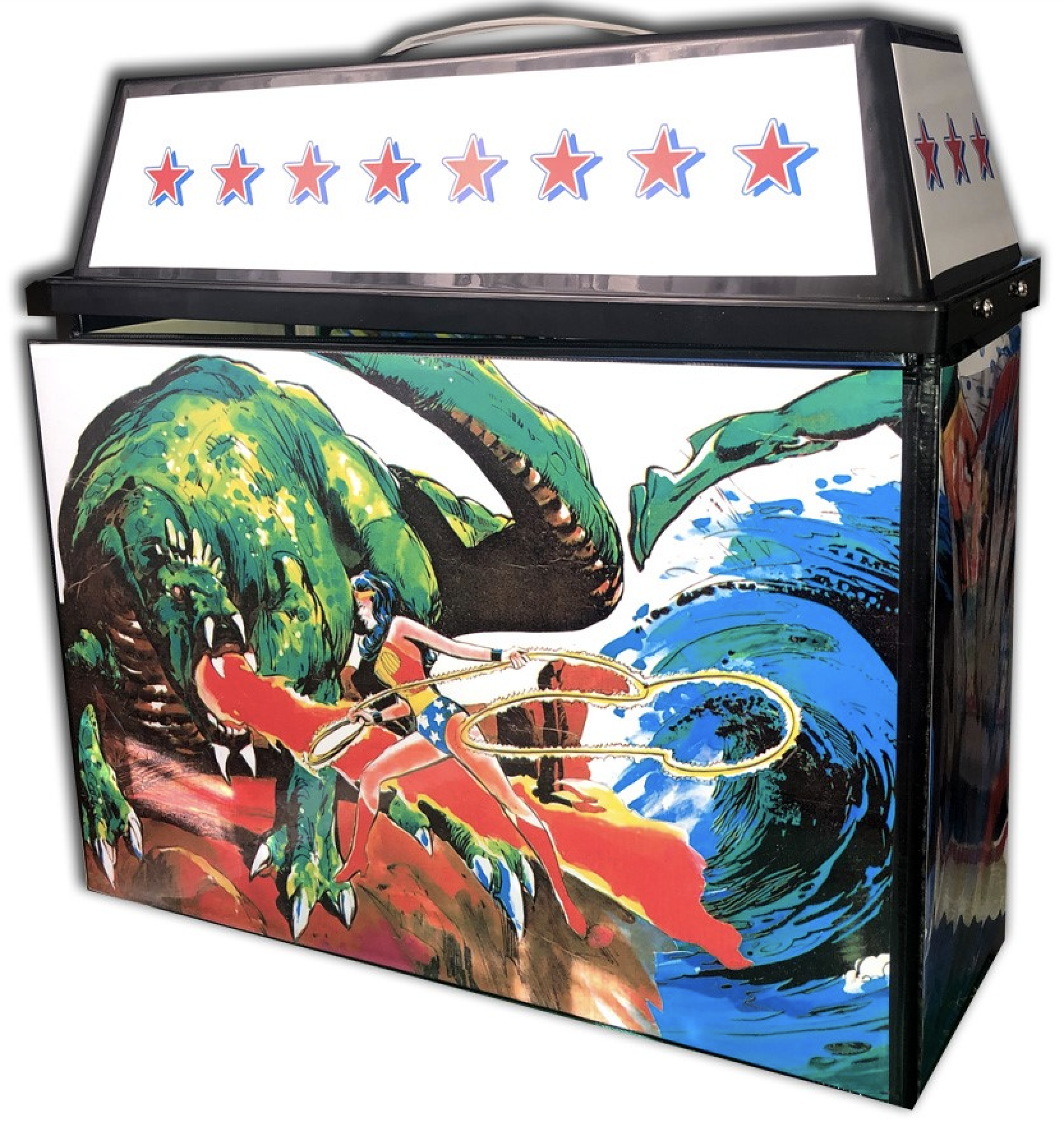 “So after cutting into the plastic, I scanned in the Neal Adams art, featuring the Justice League battling various disasters, and proceeded to reconfigure it for a smaller footprint, without the plastic Translocation Chamber parts,” he added. 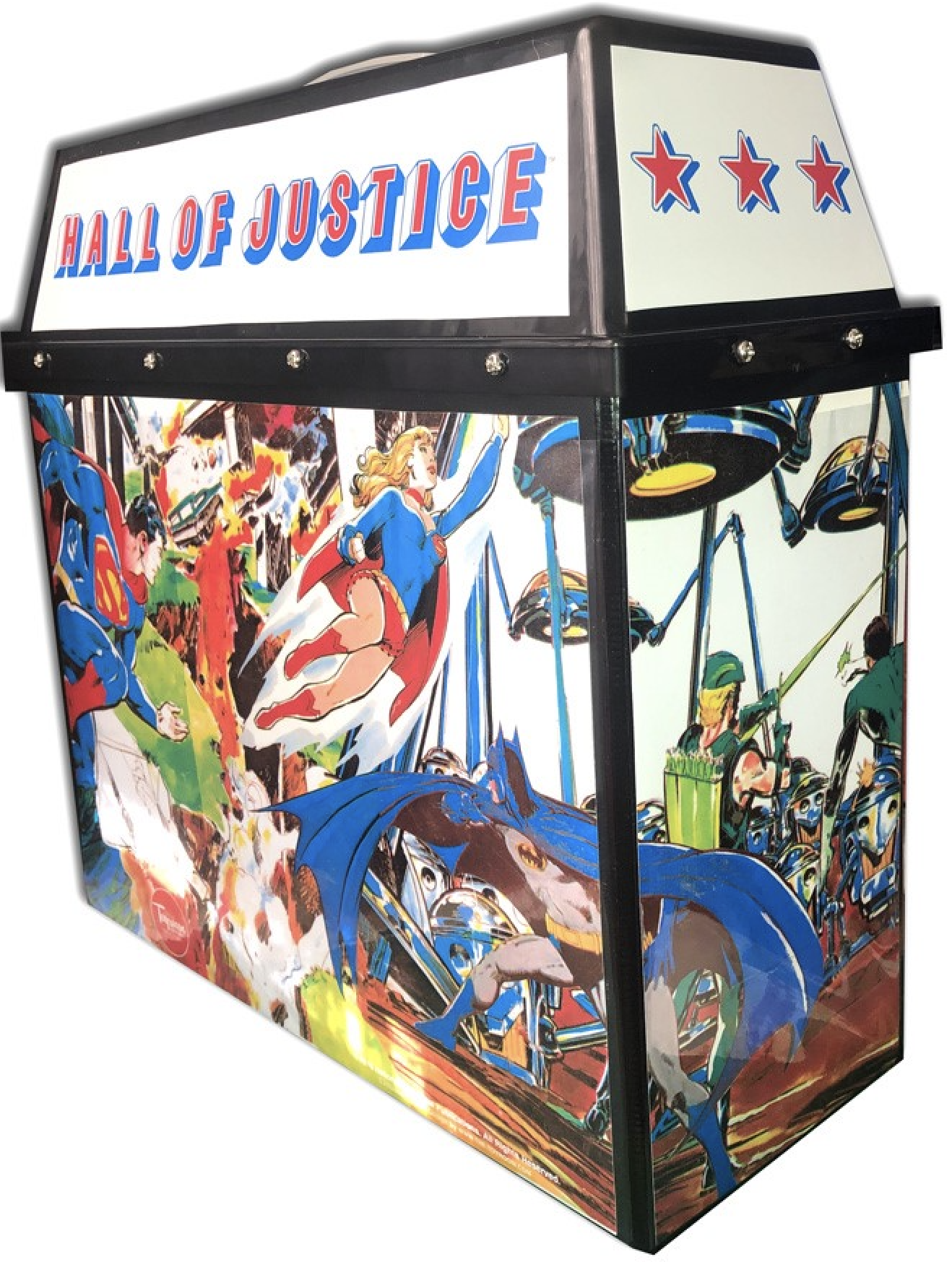 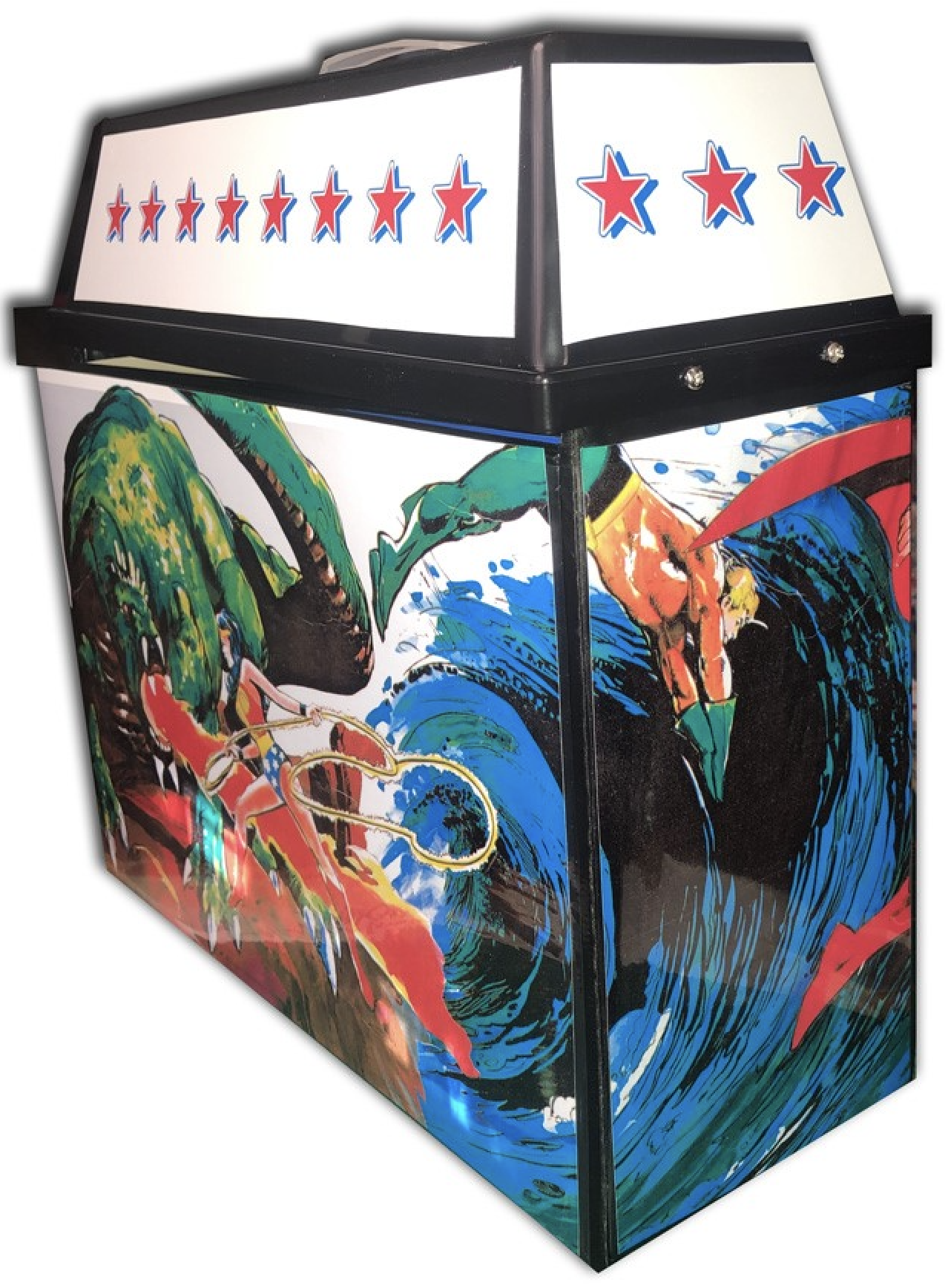 “The exterior features the aforementioned Adams JLA art. To get it all to fit in a smaller area, I had to remove Supergirl and Batman from their original disaster sections and add them in with the other characters (including Green Lantern, who makes an appearance even though Mego never made a figure of him). 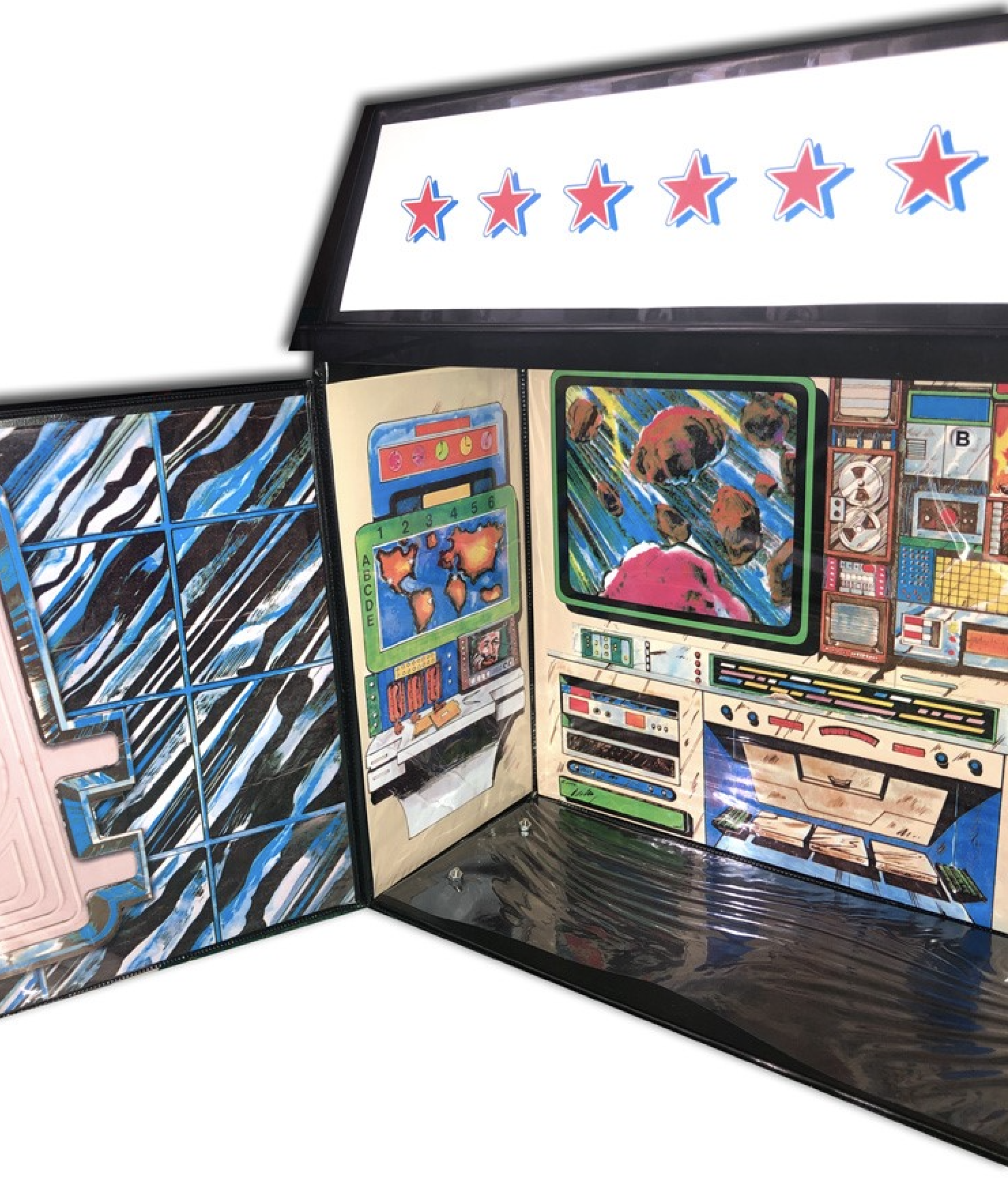 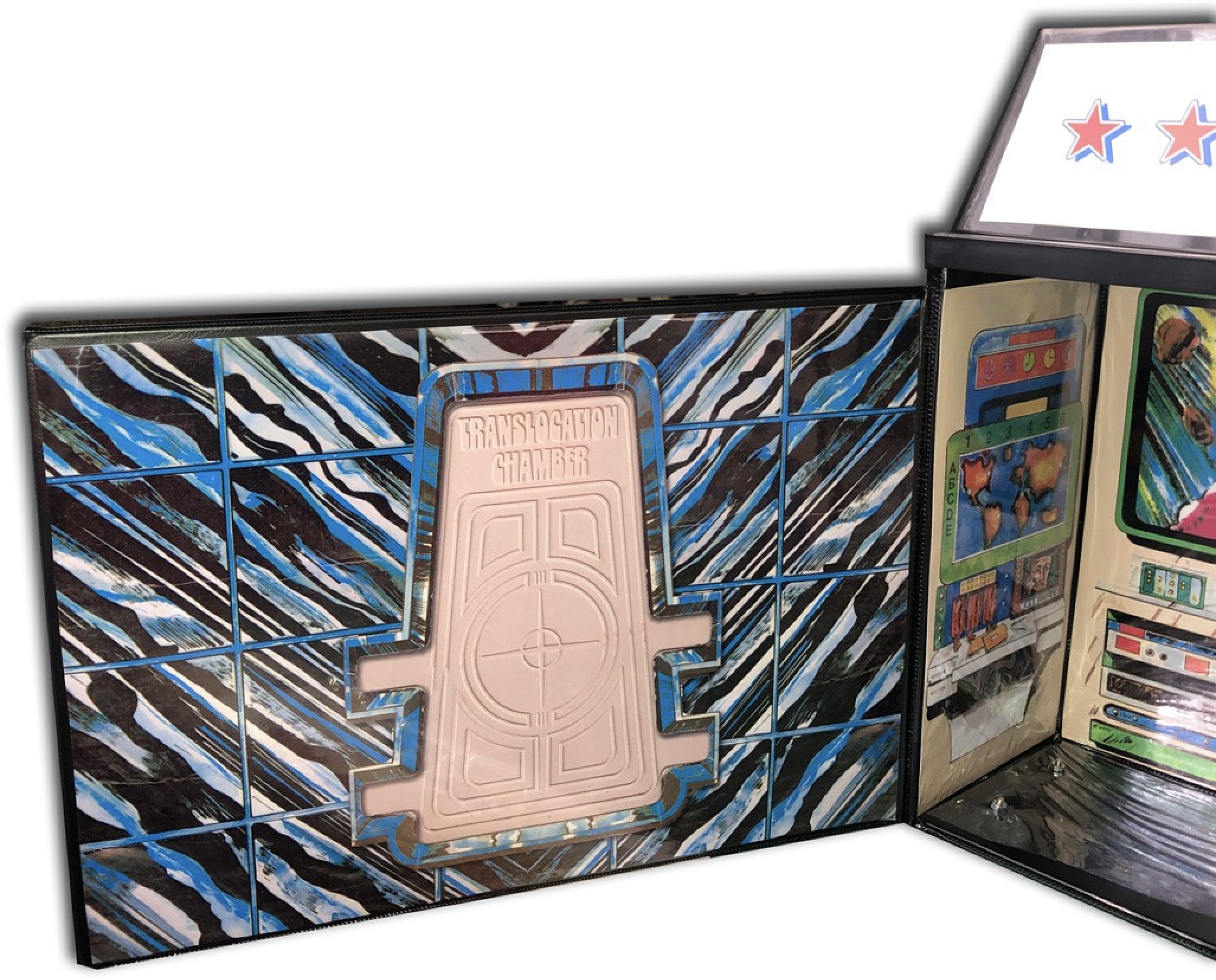 “For the interior, first there’s a 2D version of the Translocation Chamber. Next is the main computer section on the back wall. Originally in the Mego playset this had a wheel component that you could spin on a viewscreen to feature one of six villains causing trouble at a designated time in a particular city. To fill that viewscreen, as well as the one that worked in conjunction with the original T-Chamber, I replaced it with the disaster backgrounds that were cut from Supergirl and Batman on the exterior,” he said. 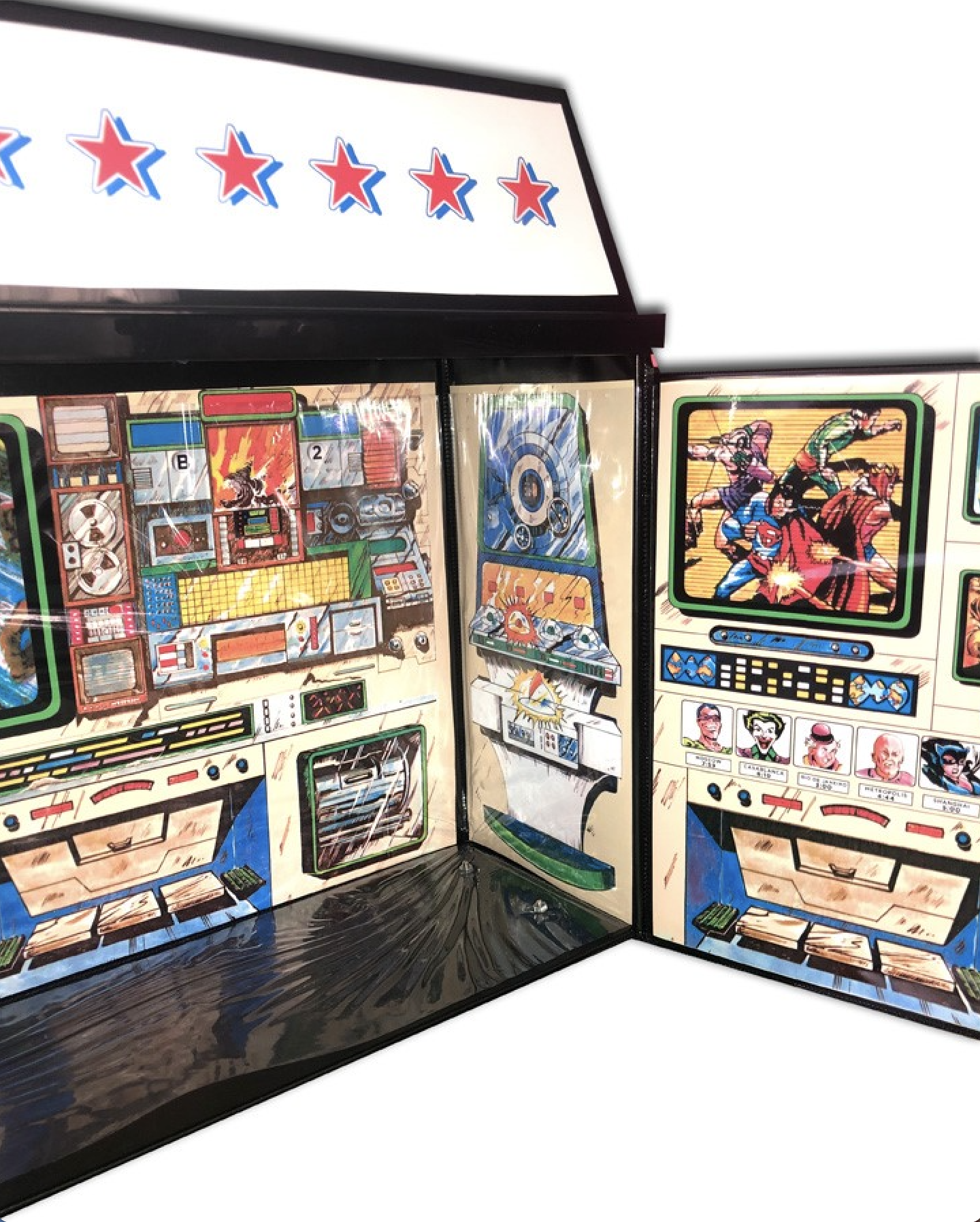 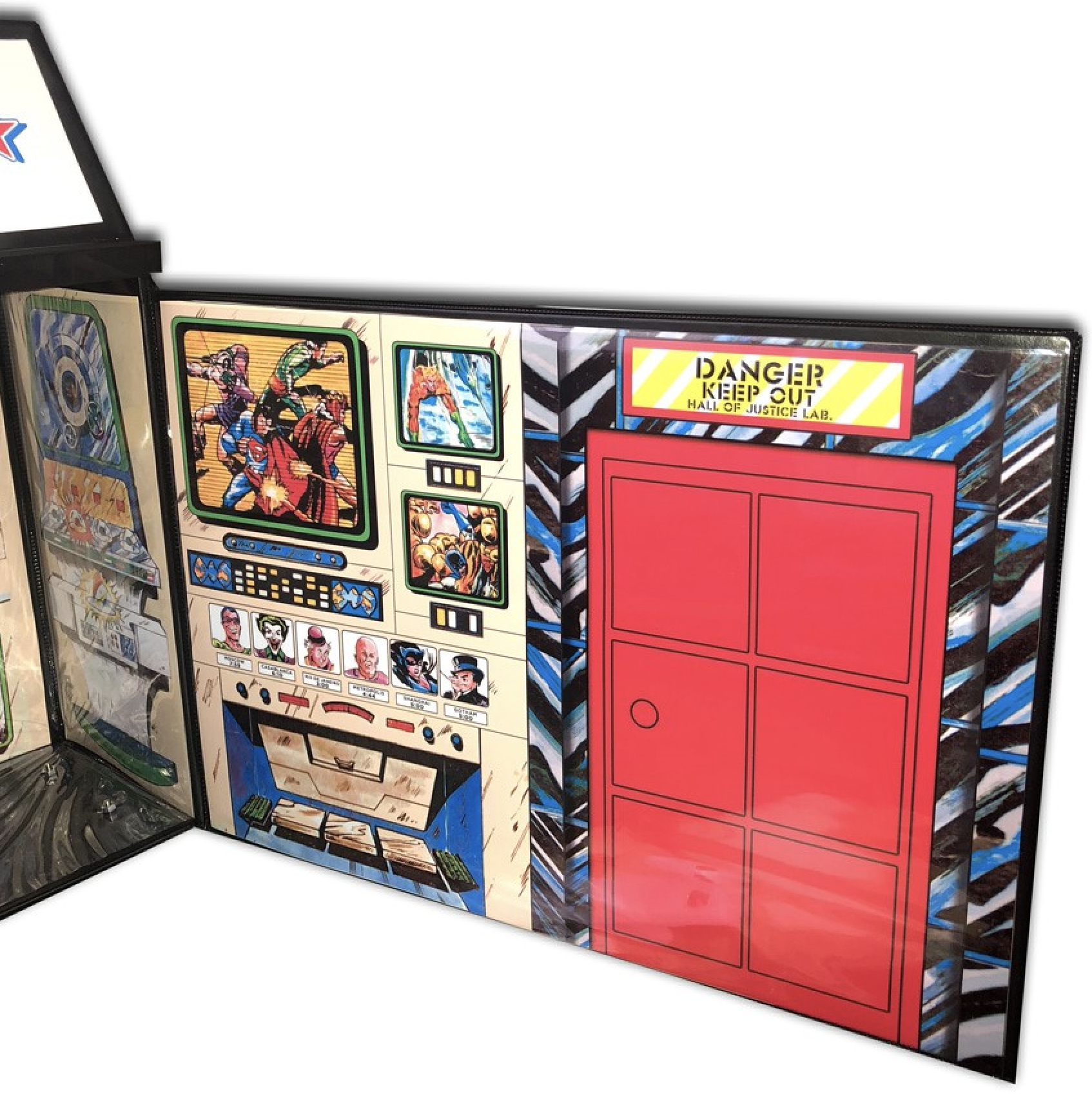 “By shrinking things down to fit a different format, it also left me with the dilemma of filling extra wall space,” Anthony noted. “For that, I added more computer screens and stuff, utliizing artwork from Mego’s Comic Action Heroes Fortress of Solitude playset. That playset infamously features a viewscreen showcasing Superman battling alongside Hawkeye, Quicksilver and the Scarlet Witch from… Marvel’s Avengers (?!). Which I HAD to keep in! I homaged the villain wheel by including them as viewscreens. Lex Luthor (who never had an original Mego figure) and an (off-Mego model) Catwoman make appearances. 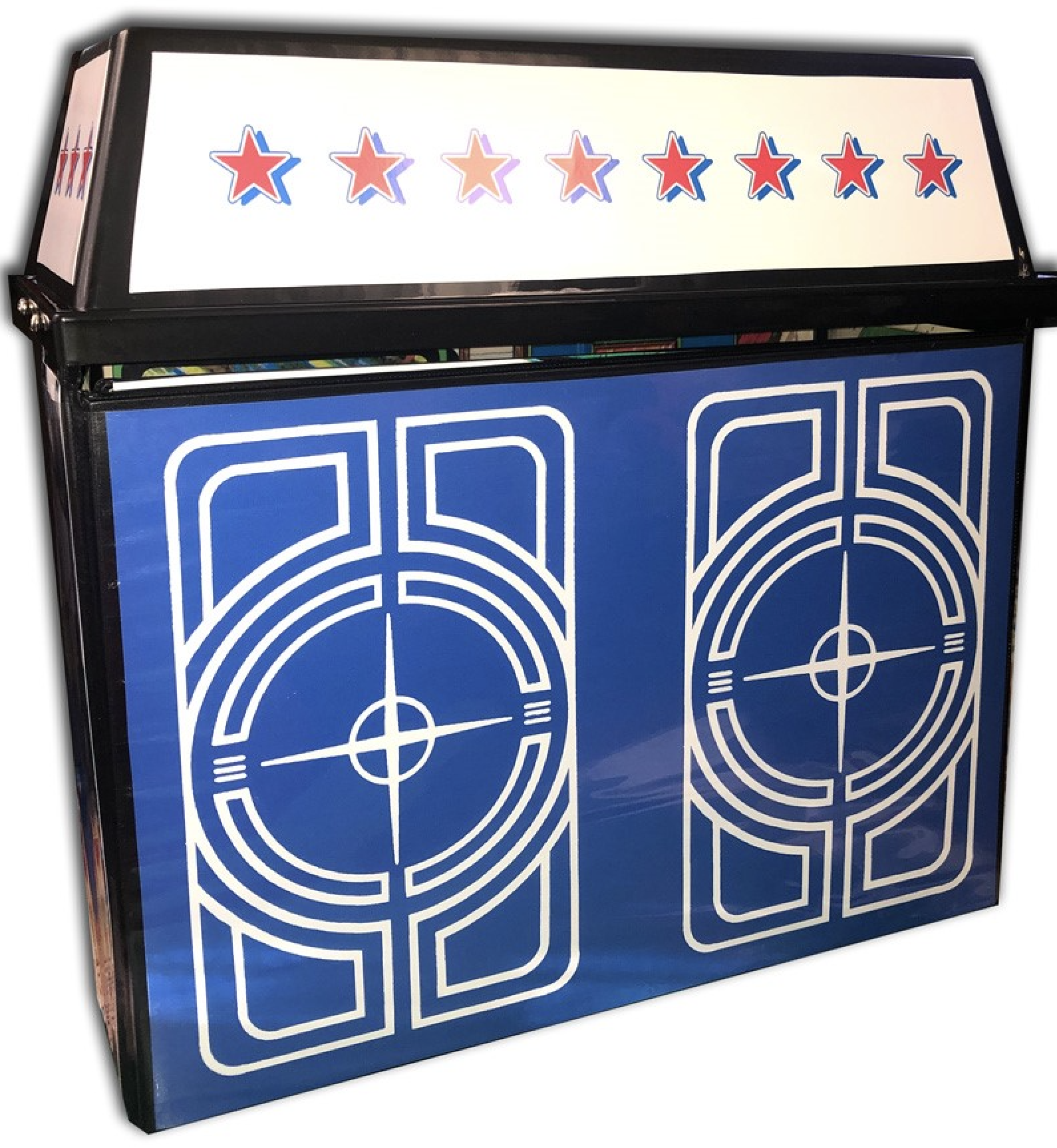 “Next door is the door featured in the Comic Action Heroes Fortress of Solitude playset that was accidentally labelled as the Hall of Justice Lab. I figured it made sense to actually have it here. And speaking of doors, as you enter the playset I included the mini-doors (I think they were doors) that were on two flaps in the original Mego playset,” he said. 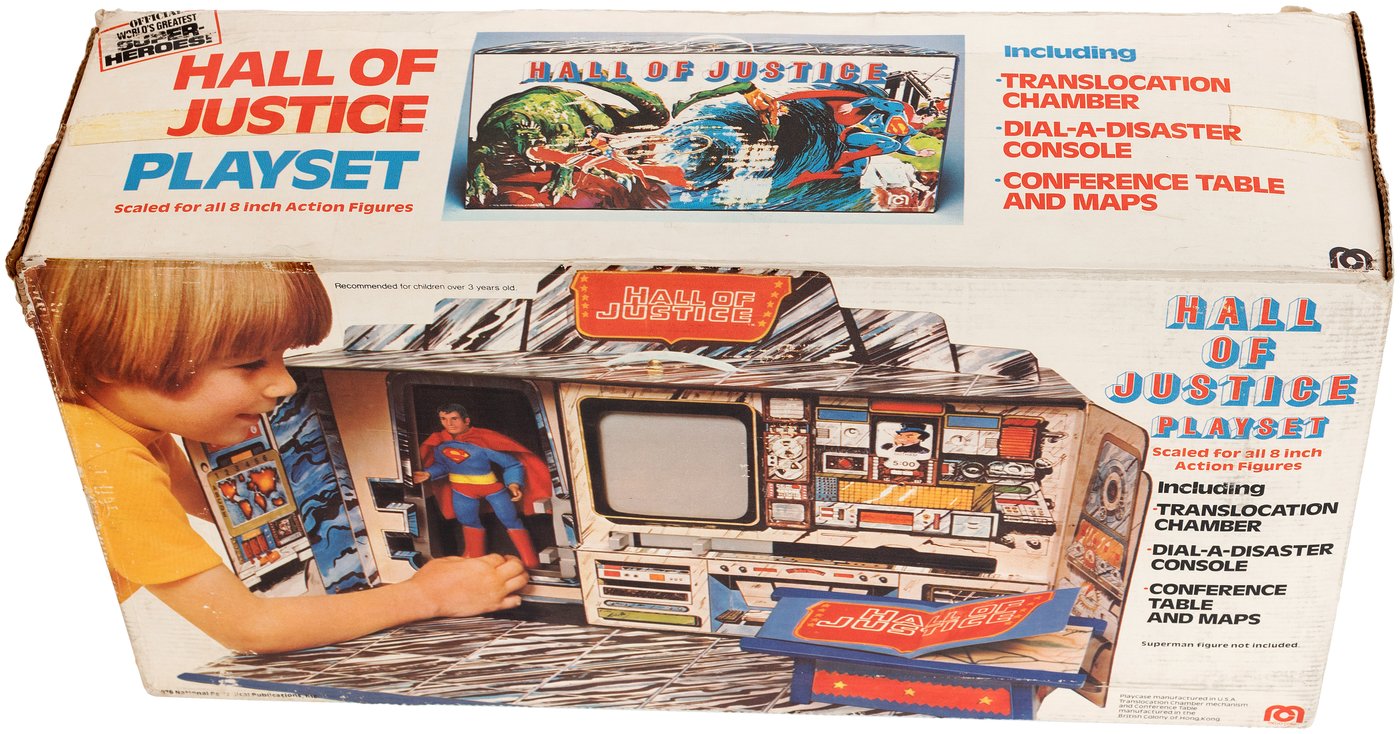 — Anthony’s created about 35 playsets over the last 18 months or so, primarily for comics characters and shows. You should definitely click here to check out our index, which shows off each set and provides links to more detailed views.