Cool Cats Not at SDCC: Gallaher and Ellis

Home » Cool Cats Not at SDCC: Gallaher and Ellis

Writer David Gallaher and artist Steve Ellis, the guys behind Harvey-nominated The Only Living Boy, are hard at work on the East Coast while all the hubbub is going on out West. Like we did with Joe Caramagna earlier this week, today we check in with a MIGHTY Q&A … 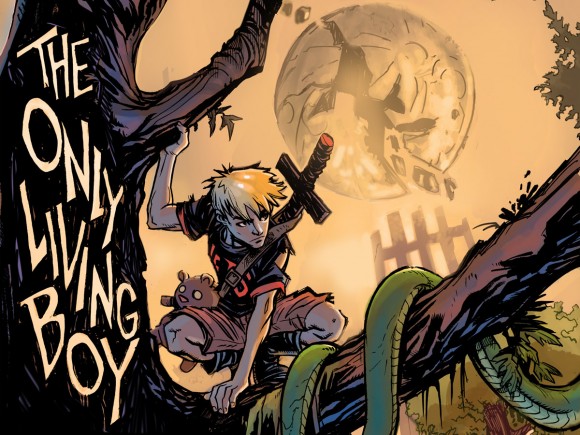 Dan Greenfield: So what are you guys working on while SDCC is raging on the other side of the country?

Steve: I’m working on The Only Living Boy #3; I’m about a hundred pages in, and we want to have the issue ready for our big debut at New York Comic Con 2014.

David: While Steve is drawing it, I’m polishing the dialogue for lettering and writing the script for issue #6. Super exciting times. 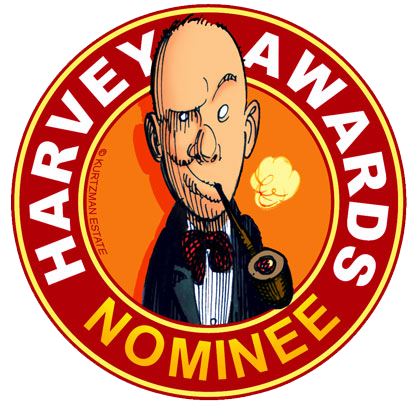 How are things going with The Only Living Boy — which happens to be one of my niece’s favorite books?

Steve: Beautifully! We were JUST nominated for a 2014 Harvey Award for Best Publication for Younger Readers!

David: The competition is stiff – but being put in the same category as Battling Boy and Adventure Time is humbling. Our company, Bottled Lightning is now being represented by the Hill Nadell Literary Agency, which is news that broke on the same day of the Harveys.

Steve: From a business standpoint, things are also going great. We just got the #1 downloaded comic position on Noisetrade, and we’ve been in the top-sellers in Comixology. We’ve been really well reviewed too by people like The Nerdist and the Hollywood Reporter, which is awesome. Tons of readers on the new website — things are going great, honestly! 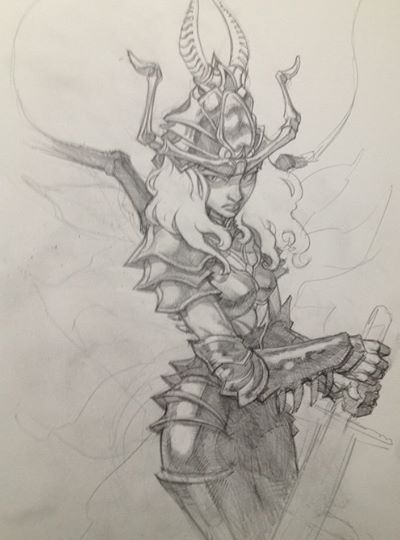 David: The reception has been absolutely stupendous. We’re deeply honored and humbled.

Steve: From a creative standpoint, the book’s a challenge because I’m constantly trying to up the ante on what I’ve done before. We’re entering a new section of the world in #3, and we want the design sensibility to be unique from the world of the Groundlings. There’s a lot of reinventing the world every time we turn around, so it’s hard but fun.

David: I’m a big fan of using the familiar as a bridge to the unfamiliar. Taking the expected and making it the unexpected. We’re going to explore a lot of uncharted worlds — it’s a challenge creatively — but a good kind of challenge. The environment and the world only become more harsh for Erik along the way. As everything becomes more of an obstacle for our hero, it becomes more of an obstacle for us. I love a good adventure.

What other projects are you working on right now?

Steve: I’m always doing freelance stuff, so my work for Dark Horse’s Project Black Sky has been coming out fairly regularly. I’ve also done some covers for Dark Horse, as well as Dynamite. I’m working on a Kickstarter for another graphic novel project called Monsterwood, and that’s out now! 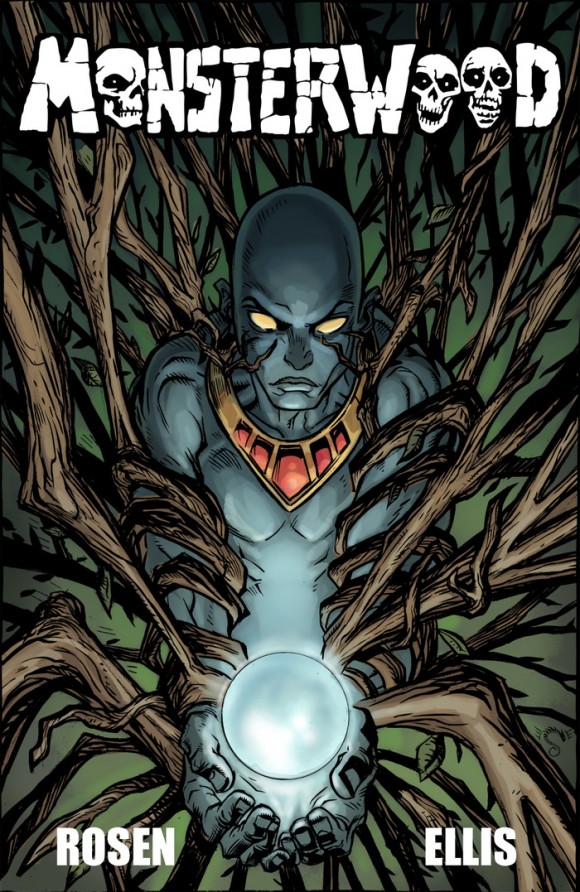 David: Right now, I’m working on two superhero projects. The first script is due at the end of the month, but it plays to my interest in neurology, bio-psychology and brain function. The second project is still at the pitch stage. It’s due after San Diego. We’ll see how well it goes, but it could be a lot of fun.

Have you guys done the San Diego bit? Why not this year?

Steve: I’ve done it many times! While I’ll miss it this year, I find that the show requires a lot of time and energy that I’m short on this season, considering all the projects I’m working on. You can go to other shows and be only kind of prepared, but SDCC really requires a devotion to preparation that is a little more than I can muster this time around. So this year, I’m focusing on closer cons like GenCon and NYCC.

David: From my experience, San Diego is the dessert for when all of our projects are done. We’re a small studio — and while the show is an absolute blast — it’s difficult to rationalize why we should take a week out of our work schedules to go to a show that requires such dramatic resources. Plus, on a personal level, that so was REALLY hard on my body last year. Taking a year off felt like the right thing to do. 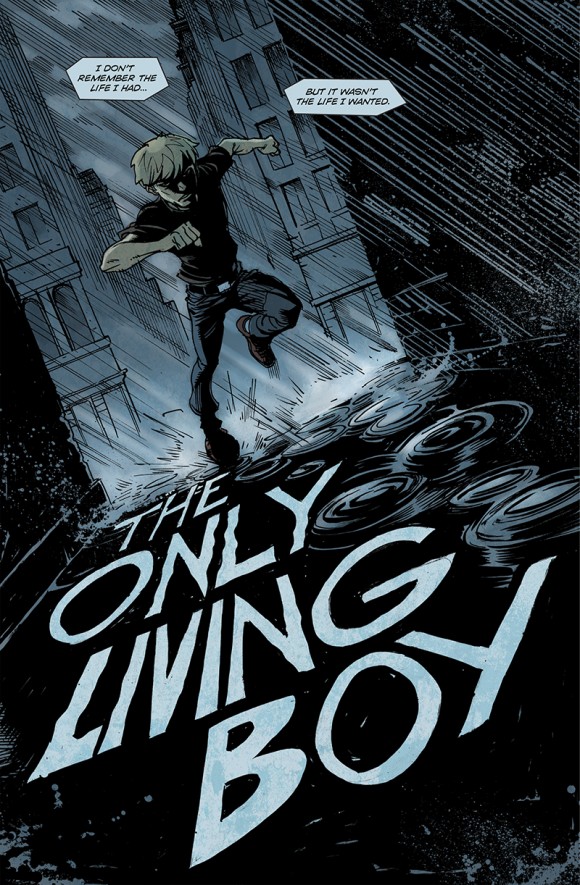 What’s the strangest thing that ever happened to you at a convention?

Steve: Well last year, I was working on the Breaking Bad comic for AMC, and I was supposed to be meeting up with the cast. Due to some communication bumps, it didn’t happen unfortunately, but while wandering through Artists’ Alley, I thought I saw Bryan Cranston walking around in a Walter White costume!

Now I had seen a lot of people dressed as Walter White before, but having had to watch every episode a million times to do the comic, it seemed like this had to be the guy because of his posture and the way he walked. So, in a fit of fannish excitement, I popped open my cellphone as I walked quickly over, and started to call up some of the images from the comic to show him and introduce myself.

When I was about three-feet away, reaching out to say hello, he turned to look at me and I nearly jumped out of my skin — while it looked exactly like Walter White, it was a life-realistic mask! I blurted out something like “eep” and high-tailed it the other way!

But I was trawling Facebook at my booth later, and I saw a story about Bryan Cranston taking off a Walter White mask at an interview! I think I had the right guy the whole time!

David: Every show has it quirks, but when Steve, Jamal Igle and I were placed in Room 666 at the Bayfront Omni a few years ago, I found that to be a pretty unique and unusual experience. On the first day, our toilet broke. Like — totally came off the floor, leaking everywhere. That was fun. #sarcasm

What else are you guys doing with your time this summer? Any traveling?

Steve: I’m doing some family traveling with the wife and kids, as well as GenCon in August; I’m excited to see some old friends there and reintroduce myself to the gaming world. I’m mostly spending a ton of time in the studio trying to get stuff done. But, the most important thing is spending time with my kids while they’re out of school. Doing big conventions was easier when they were really small, but now that they’re getting a little older, I want to spend as much time with them as possible.

David: For us, NYCC is a pretty big show. Just prior to that, I’ll be on the West Coast for a show, but I’ll let the venue make that announcement. The big shows are a lot of fun — and it’s a blast catching up with friends and fans — but it also keeps us from making more comics. That said, we have Emerald City on our radar for next year — and that looks like it will be a real hoot!

The Only Living Boy is serialized online every Monday, Wednesday, and Friday at: olbcomic.com.

Full issues are available online at: