The company that brought us so much kitschy fun is back — and we’ve got the scoop!

We’ve been running 13 DAYS OF HALLOWEEN: A BEN COOPER A DAY, leading into Halloween. (Click here for that awesome fun.) And wouldn’t you know it but we picked the right year to do it: Ben Cooper is back!

Not a hoax! Not an imaginary story!

The Cooper family is back in business, starting out with a line of products that celebrate those decades when Halloween wasn’t complete without a plastic facemask and a wonderfully off-model jumpsuit. They also have Frank Romano with them. He’s one of the important artists of Ben Cooper fame, responsible for so many of those wacky designs.

You want to know more, don’t you. Well, make sure you check out the new Ben Cooper website by clicking here.

And check out what Estelle Cooper, daughter of Ira Cooper and granddaughter of company co-founder Nathan Cooper, has to say about this welcome return to the Halloween zeitgeist:

A selection of Ben Cooper masks found on the web.

Dan Greenfield: Why is now the time to bring back Ben Cooper?

Estelle Cooper: Ben Cooper is one of those mythological characters to Americans of a certain age. But he’s also fascinating to a young audience that treats him like a folk hero for what his vintage Halloween costumes are aesthetically. They look at the pop-culture characters in their respective Halloween personas, captured forever in vinyl and plastic with vivid — some would say lurid — colors and have a visceral connection. This is the magic and legacy  of the man, his family and their brand.

Dan: What are some of the products fan can hope to see, and what’s the timetable?

Estelle: We’re actively working with companies now who get and love our rich history to produce several different lines, starting in 2017. Of course, we’ve already put out a collectible pin with Creepy Co., a couple weeks ago and we’ll have some giveaways for the rest of the year. But soon in the new year we’ll have a couple surprises and we think people are going to love them. 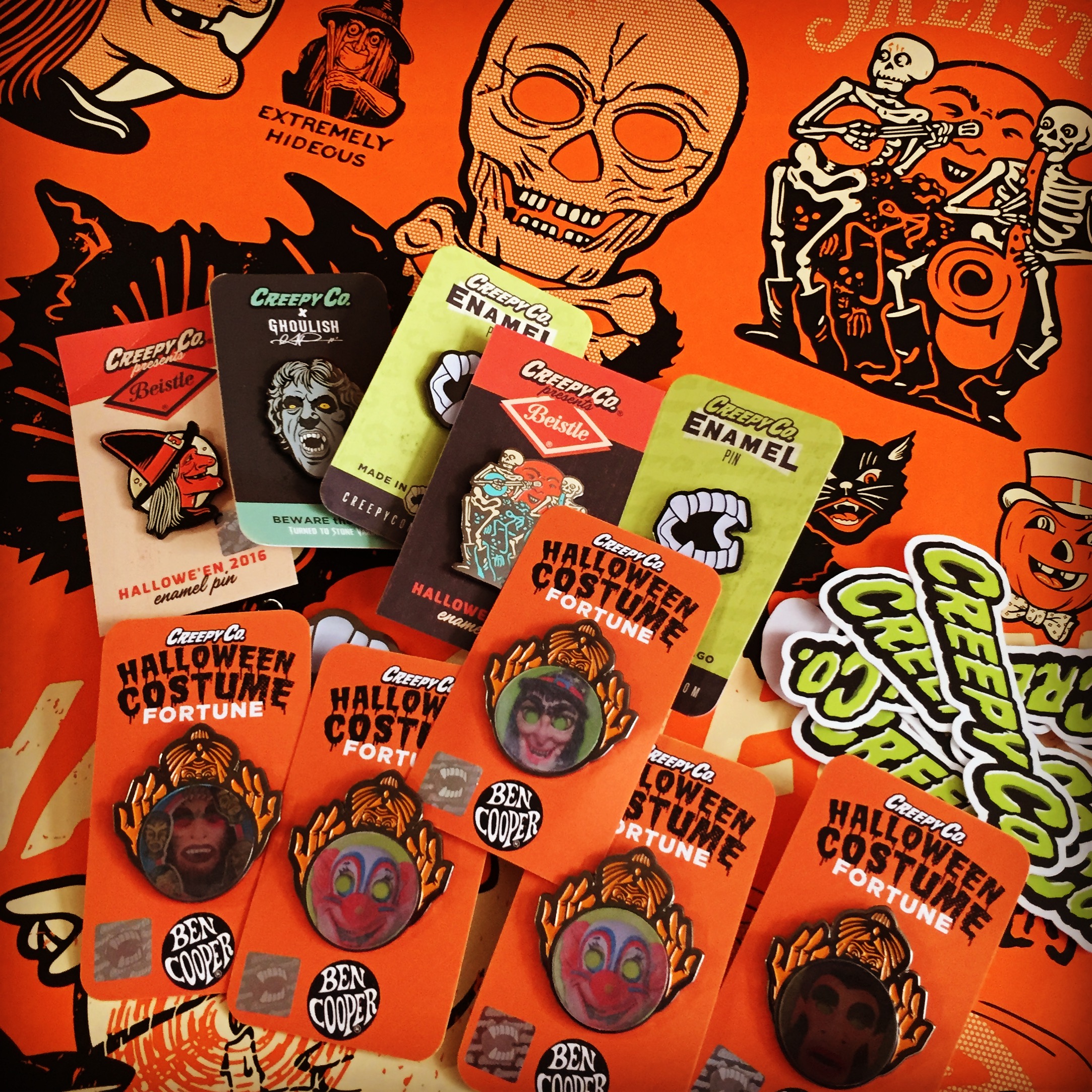 Estelle: Frank Romano was the design artist for Ben Cooper Inc., for over 30 years, from 1959 to 1989. Frank’s original art came from a close collaboration with Ben Cooper himself, and we think the art speaks for itself. We will tell you that a signature trait of Frank’s monsters is their trademark red fingernails! We love being back in business with Frank after all these years and are looking forward to bringing back some of the most famous costume designs he’s ever created. These colorful characters are from decades past and are some of the most recognizable characters of many of our childhoods. But they’re also classic retro pieces that the market loves and can’t get enough of today. And we’re very excited to be the ones, the next generation of Coopers, to introduce a new generation to Frank Romano and the Ben Cooper aesthetic.

Dan: What are the chances fans will be able to buy new Ben Cooper costumes, even if they’re just replicas to show off?

Estelle: Interesting idea. We’re looking at everything to be quite honest with you right now. Replicas of our original costumes would truly be classic collectibles, because we love our original costumes so much. We’ll be putting several different lines together that, while inspired by our original costumes, will have a new and fresh take on the original purpose of Ben Cooper Inc., to make kids love and enjoy their favorite night of the year. But Ben and his brother Nat would have wanted us to innovate and try something new like they did, every year. And with great respect to them and the artists that have loved and been inspired by Ben Cooper costumes all these years, we’re going to come up with some real original collectibles and products that take the brand and the Ben Cooper aesthetic in new and exciting new directions. We can’t wait to share them with you in the new year.

A selection of Ben Cooper costumes from around the web.