13 Things You Might Not Know About the JAMES BOND Franchise

UPDATED 10/8/21: Daniel Craig’s final Bond adventure, No Time to Die, is finally hitting US theater screens! Perfect time to re-present this piece from 2019. Oh, and Mark Edlitz’s book is now in paperback! Click here for more info. Dig it. — Dan

If you’re a regular reader of 13th Dimension, you very well know that we are first and foremost a comic-book website.

But we also like to veer off the path and hit favorite pop-cultural touchstones like Star Trek, Planet of the Apes, Star Wars… and Bond. James Bond.

Well, there’s a brand new history book about all aspects of 007 by author Mark Edlitz: The Many Lives of James Bond, which gets not only our highest recommendation but my personal urging to you to order it now in time for Christmas. It’s that good. (Click here for Amazon or here for Barnes & Noble.) 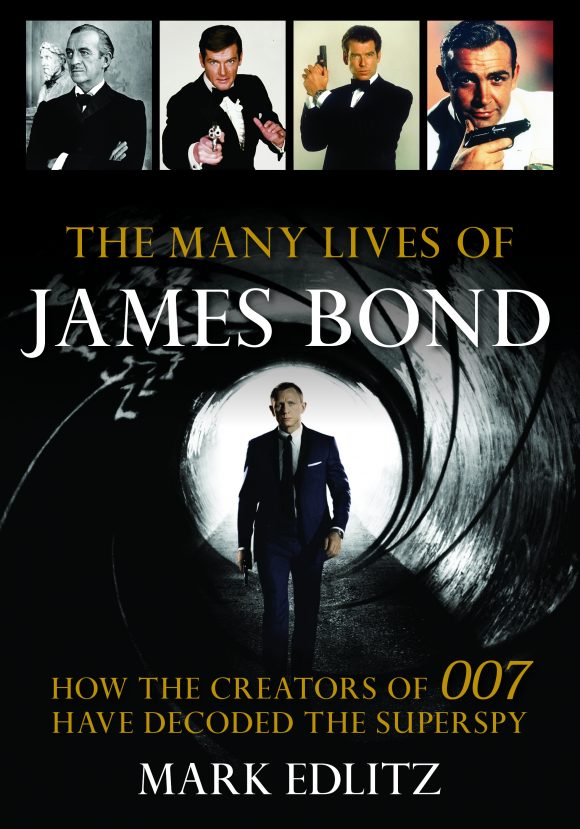 Just dig this official description: “The Many Lives of James Bond offers the largest ever collection of original interviews with actors who have played Bond in different media, as well as in-depth interviews with many of the diverse artists who have contributed their talents to the making of James Bond movies, television shows, novels, radio dramas, comic books, and video games.”

Anyway, as one of the world’s pre-eminent Bond mavens, Mark has put together 13 THINGS YOU MIGHT NOT KNOW ABOUT THE JAMES BOND FRANCHISE — just for you, our 13th Dimension readers.

Mark has written a book like this in the past, focusing on actors who’ve played various superheroes on screen: How to Be a Superhero (click here). And he also provided us with one of the most popular interviews we’ve ever published — with Danny Seagren, who played Spider-Man on The Electric Company. (Click here to check it out. It’s terrific.)

But back to Bond. Have you seen the new trailer? You have? Great, right?

Well, here it is again…

… and here’s Mark with 13 THINGS YOU MIGHT NOT KNOW ABOUT THE JAMES BOND FRANCHISE:

Eon’s 25 Bond movies and Ian Fleming’s novels are the most visible part of the franchise, but Bond fandom extends into radio dramas, video games, comic books, comic strips, audio books, continuation novels, and video games. Here are 13 THINGS YOU MIGHT NOT KNOW about the ever-expanding James Bond universe:

1. The first time that Bond appears on screen in Dr. No, it’s not Sean Connery who is playing the spy. Instead, it’s Bob Simmons doubling for Connery in the gun barrel sequence. Simmons would also appear as Bond in From Russia with Love and Goldfinger. Connery finally appears in character when the opening was reshot for Thunderball. In the pre-title sequence of that film, Connery and Simmons (playing an enemy agent) do battle. The brawl represents just one example of when a Bond actor would fight his double in the series. 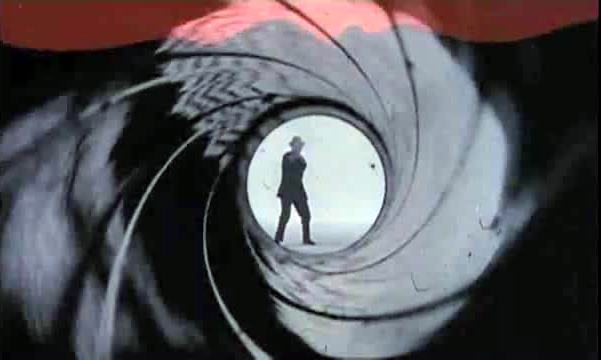 2. Dr. No, released in 1962, was not the first adaptation of Fleming’s work. The Daily Express, the English newspaper, published a Bond comic strip, starting with Casino Royale, back in 1958. The Daily Express strips, usually drawn by John McLusky and later Yaroslav Horak, ran in the paper for decades. 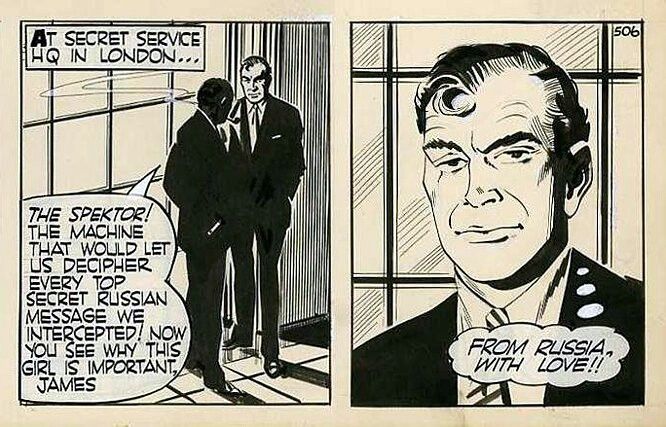 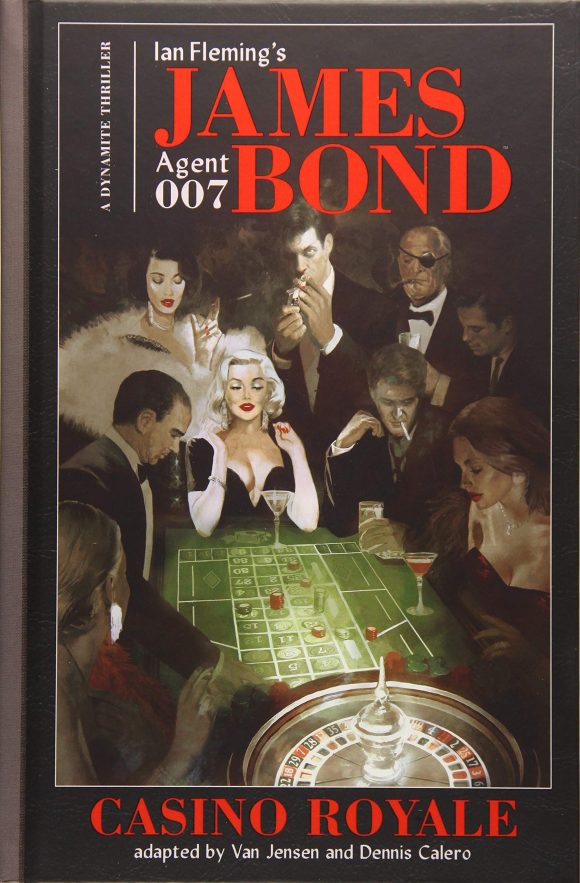 4. Six actors have played Bond in the Eon-produced Bond films. However, they are not the only actors who have portrayed Bond in live-action productions. David Niven starred as 007 in the 1967 spoof Casino Royale. In 1954, Barry Nelson played “Card Sense” Jimmy Bond, an Americanized version of the spy in a live-televised adaptation of Fleming’s Casino Royale. Nelson is best remembered for his performance in The Shining as the manager who shows questionable judgment by hiring Jack Nicholson’s Jack Torrance as the caretaker of the Overlook Hotel. 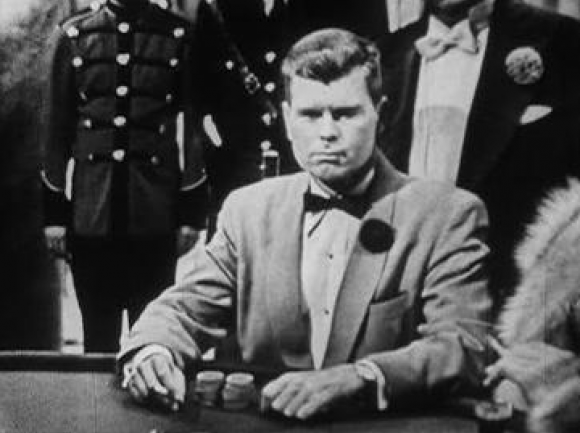 5. In the early ’90s, Eon produced a cartoon called James Bond Jr., which starred Corey Burton as the title character. The series depicted the exploits of Bond’s teenage nephew, who does battle with Bond movie villains, such as Goldfinger, Jaws, and Dr. No, as well as new baddies like Scumlord, Dr. Derange, and Barbella.  The unlikely series also spawned a robust toy line. 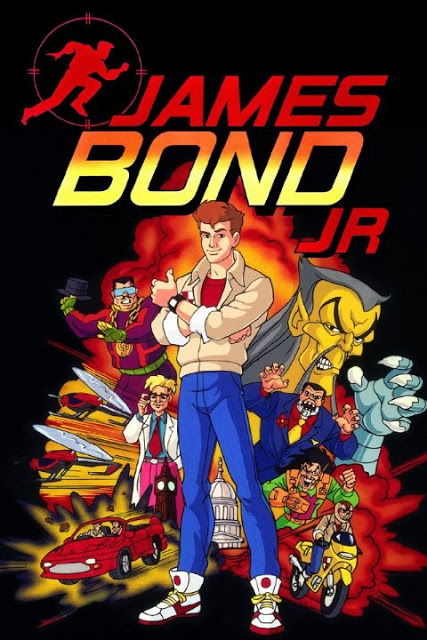 6. For Your Ears Only: To date, there have been three actors who played James Bond on the radio. Toby Stephens, who played a Bond baddie in Die Another Day, played Bond in eight different radio dramas. Stephens’ latest performance was in 2019’s Live and Let Die. Before him, Michael Jayston played 007 in 1990. Later, Jayston met with Eon and was a candidate to take over the part of the cinematic Bond. In the ’50s, Bob Holness, who later became known as the host for the game show Blockbusters, played the spy in a live broadcast of Moonraker for the South African Broadcasting Company. There are no known recordings of the production. 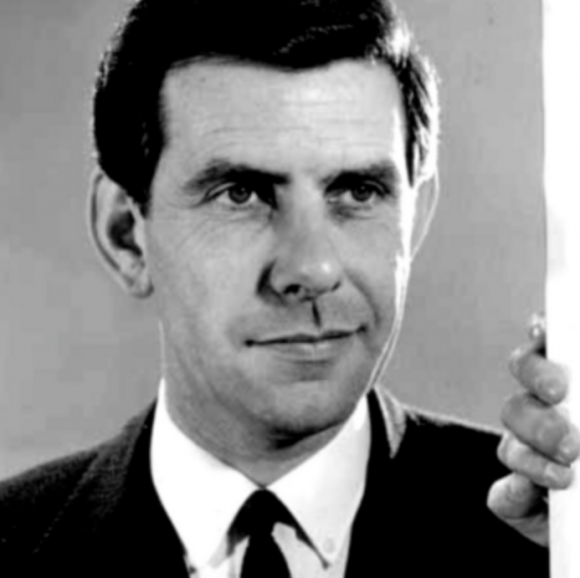 7. Stuntman Rocky Taylor was awarded a Guinness record for being the only person to double for two different actors playing Bond in one year. In 1983, Taylor doubled for both Roger Moore in Octopussy and Sean Connery in Never Say Never Again.

9. James Bond put on his boogie shoes in a singing and dancing tribute to the franchise for the 1982 Academy Awards ceremony.

10. In Forever and a Day, Anthony Horowitz’s 2018 Bond continuation novel, we learn that James Bond is not the first agent to use the 007 code name. In Horowitz’s prequel to Casino Royale, M. tasks Bond with finding out who killed 007. Other continuation novelists include Raymond Benson, Sebastian Faulks and John Gardner, who wrote more original Bond novels than Ian Fleming.

11. The James Bond Expanded Universe: Under the pen name Kate Westbrook, Samantha Weinberg wrote The Moneypenny Diaries, a trio of novels about M’s secretary. Bond’s early life is explored in the Young Bond series. The nine-book run depicts Bond’s exploits as a teenager at Eton and Fettes. One of the novels, By Royal Command, is partially inspired by a passage in Ian Fleming’s You Only Live Twice that reveals that Bond was kicked out of school for an incident involving a maid.

12. He’s not just shaken or stirred, he’s also sweet: Sean Connery’s last performance as Bond was not in 1983’s Never Say Never Again but in 2005’s video game adaptation of From Russia With Love. Connery reprised his iconic role because he thought it would appeal to his grandchildren. Strung together, the cutscenes could form the basis for James Bond: The Animated Movie.

13. Pierce Brosnan’s last performance as Bond was not in Die Another Day but in the video game Everything or Nothing, which was co-written by three-time Bond screenwriter Bruce Feirstein. Daniel Craig has also lent his voice and likeness to Bond video games, including Blood Stone. In the video game 007 Legends, Daniel Craig’s Bond (who is voiced by Timothy Watson) is inserted into sequences from one movie from every preceding Bond actor. In Legends, Craig’s Bond appears in Goldfinger, License to Kill, Die Another Day, Moonraker and On Her Majesty’s Secret Service. 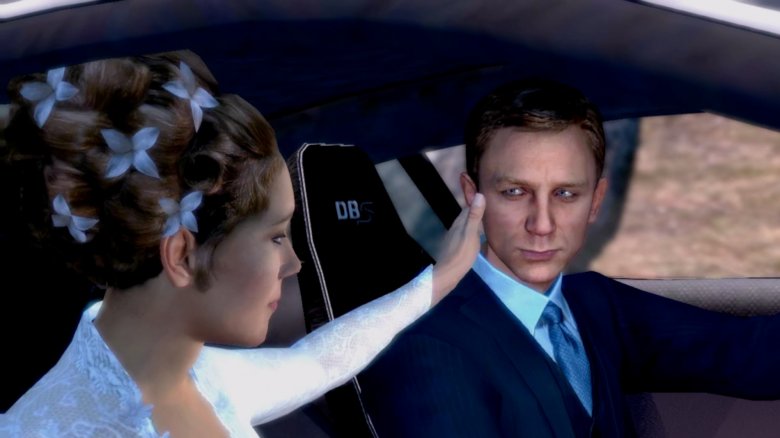 There’s no one right way to make a James Bond story. The movies can be far out and fantastic, like Roger Moore’s Moonraker, in which 007 goes to space. They can be more grounded, like George Lazenby’s On Her Majesty’s Secret Service. They can be Cold War thrillers like Sean Connery’s From Russia with Love, action films like Pierce Brosnan’s Tomorrow Never Dies, or they can delve into Bond’ psyche like Casino Royale.

While Bond movies are generally considered to be a genre unto themselves, Eon has been careful to update the movies to reflect the sensibilities of the time. As Roger Moore indicated in his interview with me, his Bond might not work today, bu  Daniel Craig’s Bond wouldn’t necessarily have worked in the ’70s and early-’80s.

While Bond movies continue to change in unexpected ways, there is one thing that we can always count on — James Bond will return.

The Many Lives of James Bond: How the Creators of 007 Have Decoded the Superspy, by Mark Edlitz, is published by Lyons Press. Click here for the newly released paperback edition. It lists for $21.95 and runs 312 pages.

— The Curious Case of When James Bond Joined the DC Universe. Click here.