One of my favorite things to do is to post a 13 COVERS salute for a creator’s birthday. For an artist, that’s easy. For a writer? That’s a bit more of a challenge and it doesn’t always work.

But then sometimes things have a way of coming together. When I saw that award-winning writer Steve Skeates’ birthday was coming — he was born Jan. 29, 1943 — I contacted 13th Dimension columnist and Aquaexpert Rob Kelly to see if he wanted to write an appreciation.

He quickly signed on — and did me one better by coming up with a selection of 13 great moments from Skeates’ ever-popular Silver/Bronze Age run on the Swift and Powerful Monarch of the Ocean.

Steve Skeates was part of the first generation of writers who went from comic book fan to comic book pro, starting out as a proofreader at Marvel Comics in 1965. After showing no talent for the job, the legendary Stan Lee and Roy Thomas gave Skeates a gig writing Westerns. In short order, Skeates’ skills as a writer became obvious to readers and editors alike, and over the next decade he would spin stories for DC, Warren, Tower, Charlton, Gold Key and Archie.

Charlton editor Dick Giordano brought Skeates over with him to DC, where he was given the reins on Aquaman. Eschewing the formula that dominated the book for the first 39 issues, Skeates—along with collaborator Jim Aparo, also new to the title—kicked off a multi-issue Search for Mera storyline that would take the King of the Seven Seas all over the world, on sea and on land. He gave Aquaman a sense of urgency and drama that readers had not seen before, and in just 16 issues produced one of the greatest runs the character has ever seen. (NOTE to DC: With Aquaman’s movie coming, it’s high time for this run to be collected in trade. — Dan)

To celebrate Steve Skeates on the occasion of his 75th birthday, here are 13 great moments from his time writing Aquaman — as well as one other underwater hero you might be familiar with! 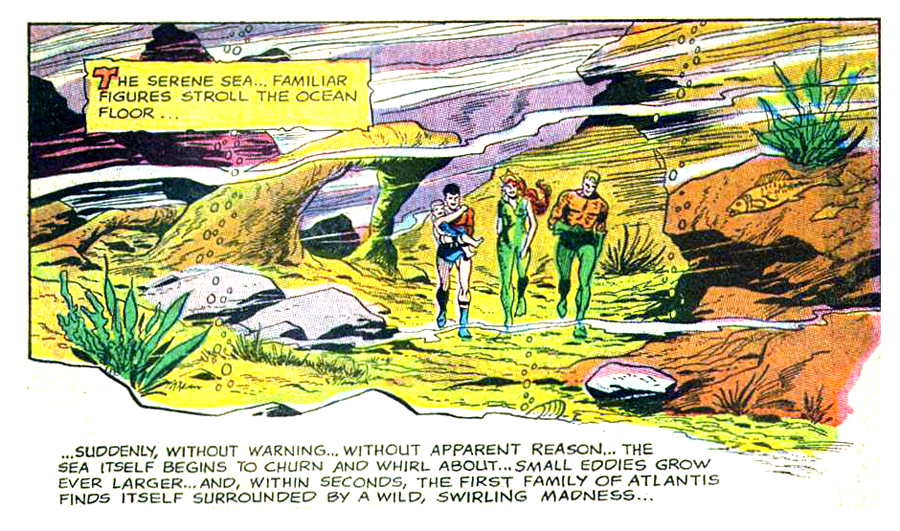 It all started with this opening splash panel (aren’t all Aquaman panels “splash” panels?) to Aquaman #40 (Sorcerers of the Sea, July 1968), giving us an Aqua-Family in an all-too-fleeting moment of happiness. 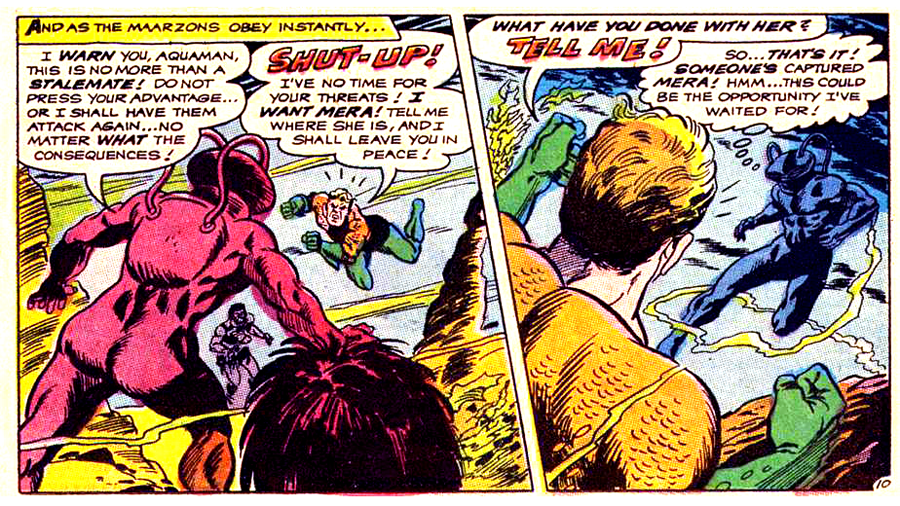 In Aquaman #42 (Is This My Foe?, Dec. 1968), Black Manta stumbles into Aquaman’s search for the kidnapped Mera. He’s not involved, but decides to use the Sea King’s confusion to his own villainous advantage. 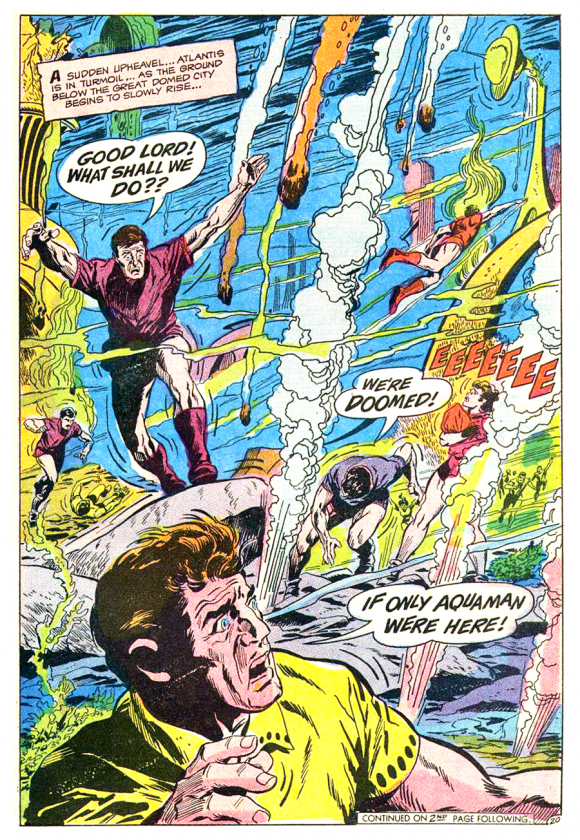 Skeates was an expert at juggling multiple sub-plots, including events in Atlantis, which had to deal with the absence of its king. Here, in Aquaman #43 (To Win is To Lose!, Feb. 1969), disaster hits the citizens of the underwater city. Aquaman not being present to protect his people would create a power vacuum that would reveal itself in subsequent issues. 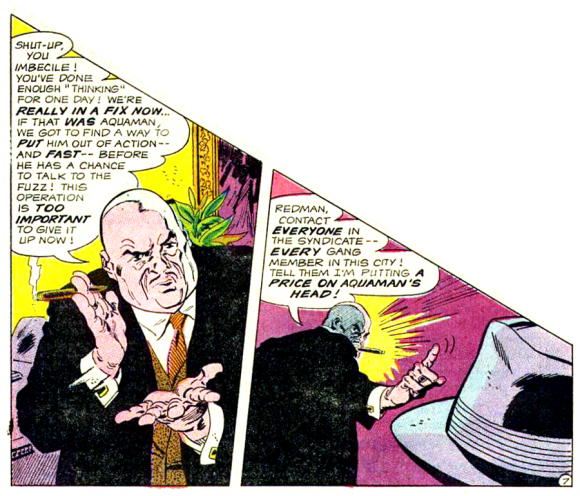 Readers soon learned that a Surface World mob syndicate was involved in Mera’s kidnapping, and Skeates and Aparo took obvious pleasure in giving us a gang of crooks who look (and sound) like they came right from Central Casting. 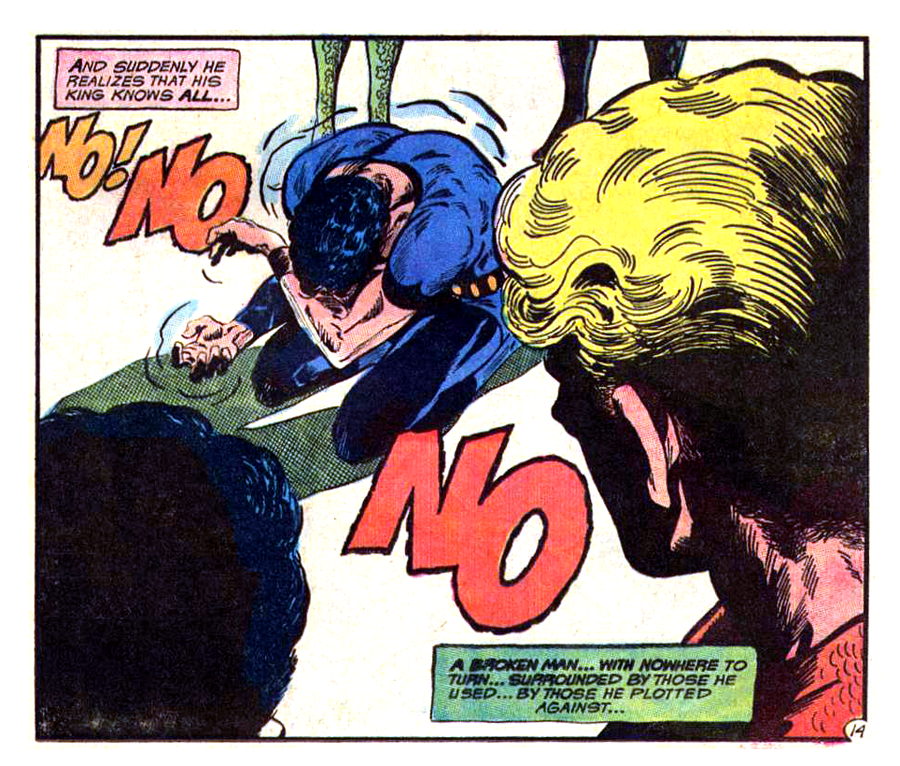 Another long-running plot line is resolved in Aquaman #48 (A Kingdom to Rebuild!, Dec. 1969) when a power-hungry member of Atlantis realizes his coup attempt against Aquaman and Mera has failed. 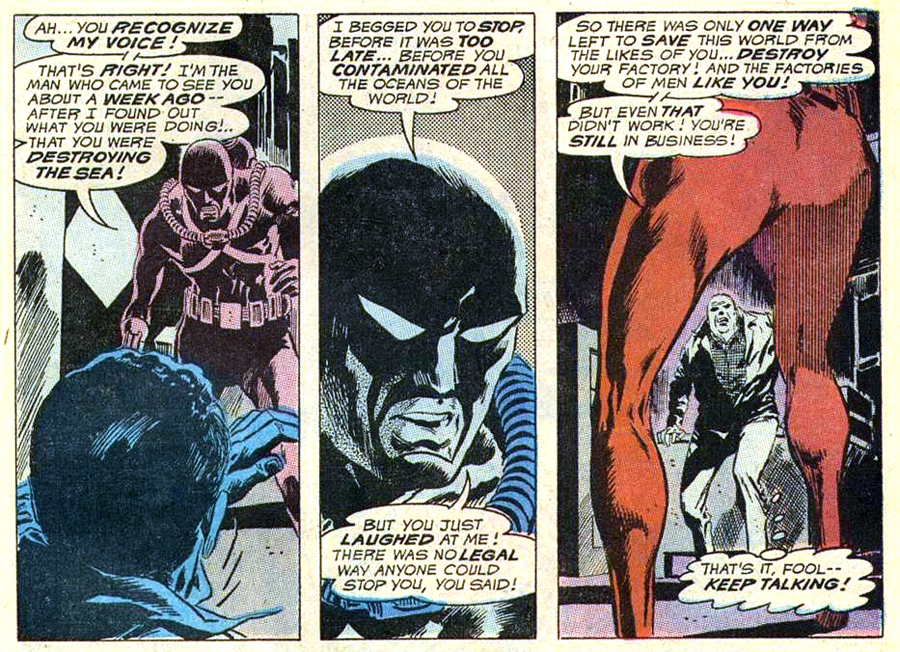 Skeates recognized that Aquaman, more than any other superhero, lent himself to environmentally based storylines, giving the title a social relevance it hadn’t had before. In Aquaman #49 (As The Seas Die!, Feb. 1970), a mysterious saboteur confronts a polluter by taking matters into his own hands. 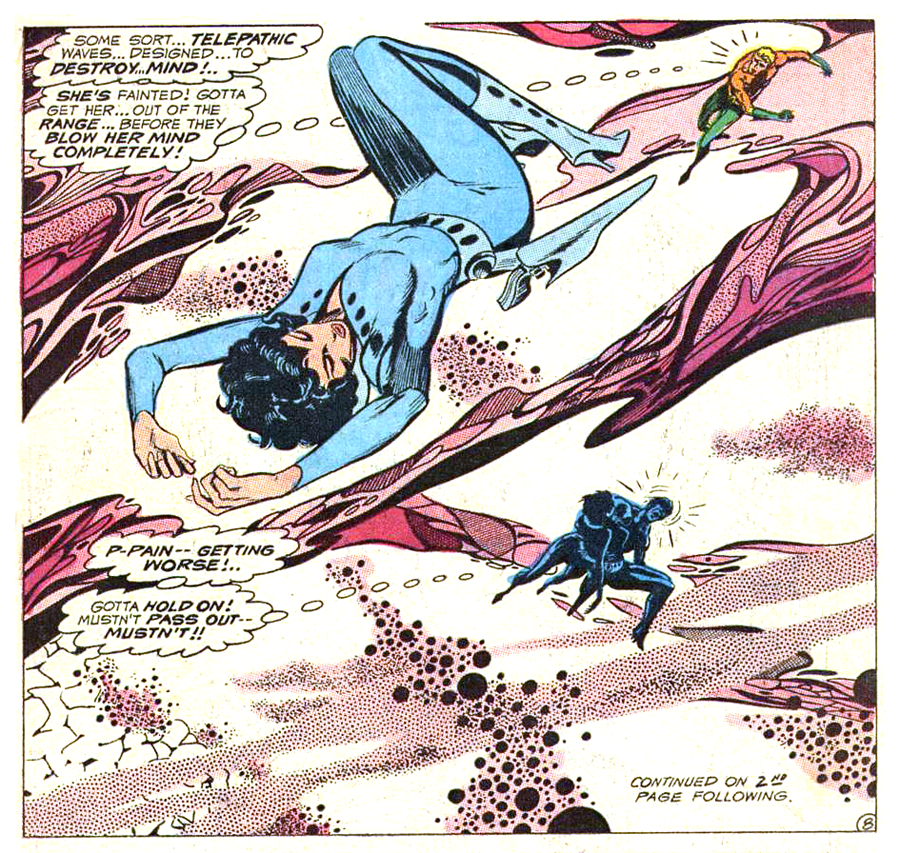 Traveling the world wasn’t enough for Aquaman! In Issue #51 (The Big Pull, June 1970), Aquaman finds himself in an interdimensional world where there seems to be no discernible up, down, left or right. Rumors abound that this issue synchs up perfectly with Pink Floyd’s Dark Side of the Moon. 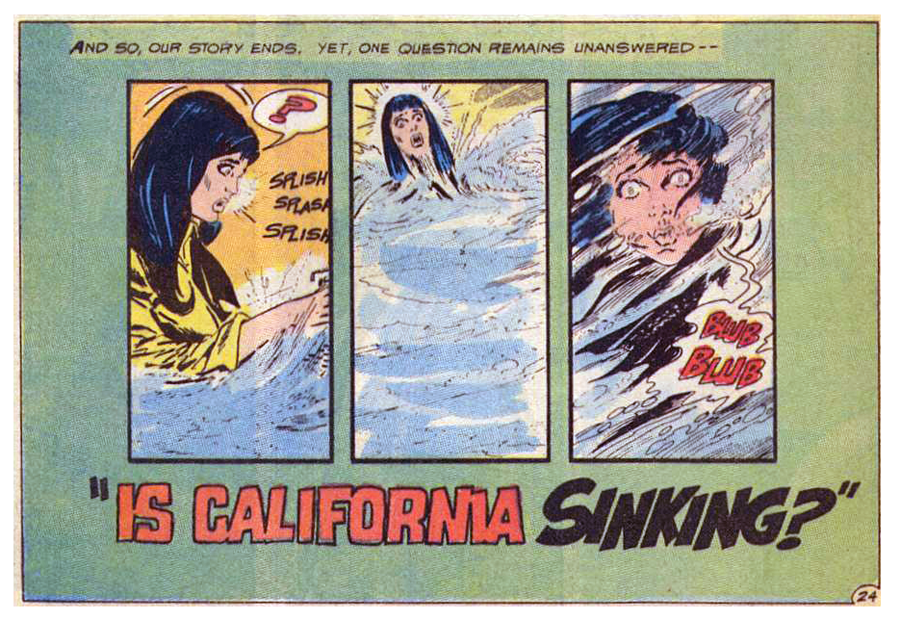 In Aquaman #53 (Oct. 1970), Skeates asks the question Is California Sinking?After our hero saves the day, we are reminded that some problems aren’t solved so easily. 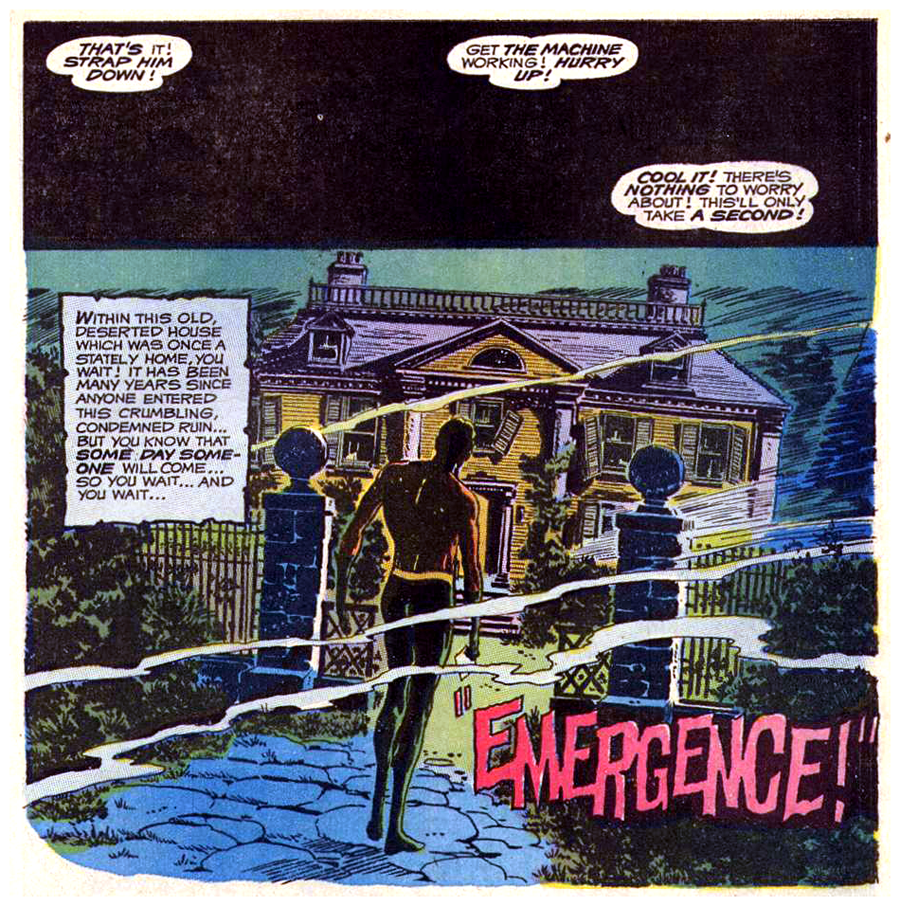 In addition to superheroes, humor, sci-fi and Westerns, Skeates could also write horror quite effectively. In Aquaman #54 (Crime Wave!, Dec. 1970), the Sea King undergoes brainwashing and spends most of the issue in the dark, spooky corners of his own mind. It’s as if Aquaman has wandered out of his own book and down the hall into The House of Mystery.

Skeates and Aparo’s brilliant run on the Aquaman title ended with Issue #56, when the book was abruptly cancelled. In The Creature That Devoured Detroit! (April 1971), Skeates introduces a new hero, the Crusader, who has an ambitious plan to clean up the streets. Skeates’ mordant humor is on full display here as we learn that, despite his optimistic outlook, the Crusader’s superheroing career would come to an ignominious end: Just a few pages later, his body is found on the street, having fallen to his death after misjudging a rooftop jump due to poor eyesight! 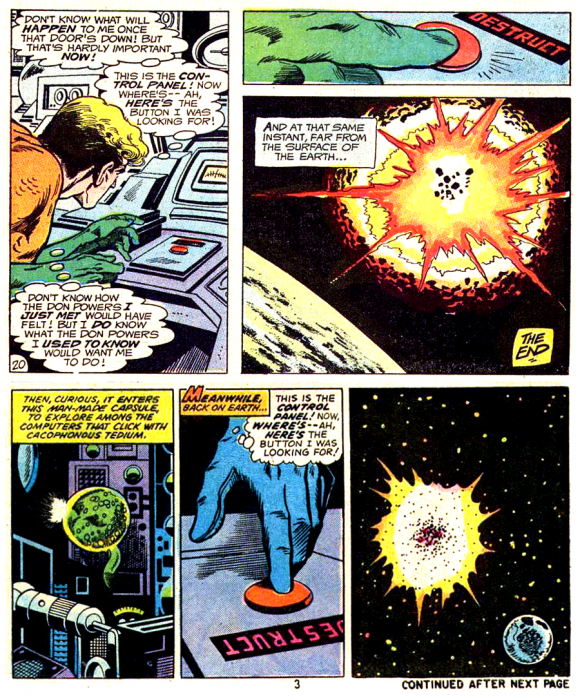 The Crusader’s one-issue career as a superhero wasn’t the only genre-busting Skeates would do in Aquaman #56. After ending the threat of an environmentally damaging satellite, Aquaman makes a cameo “appearance” in Marvel’s Sub-Mariner #72 (From The Void It Came!, Sept. 1974), where the actions of a mysterious gloved protagonist kicks off another adventure, this time starring the House of Ideas’ underwater superhero. How does Skeates explain this? He doesn’t. (To hear an in-depth discussion of the Aquaman/Sub-Mariner “team-up,” check out the 1/29 episode of the Comic Reflections Podcast!) 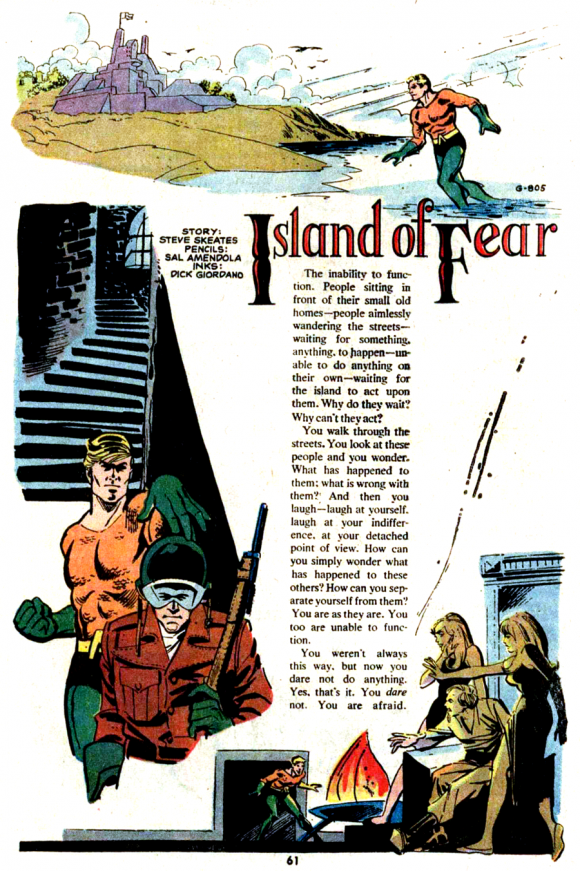 Skeates’ run on Aquaman had two odd codas (three, really, if you count Sub-Mariner). The first was in Super DC Giant #26 (Aug. 1971), which was an all-Aquaman issue. To fill out the all-reprint special, DC had Skeates write a two-page Aquaman prose story, accompanied by “spot” illustrations by Sal Amendola! Why the Sea King, whose title had just been cancelled, would be given an entire special to himself is a mystery lost to the ages. Aquaman sits alongside Superman and Batman as one of a handful of DC heroes who have appeared in prose stories in the pages of DC Comics. 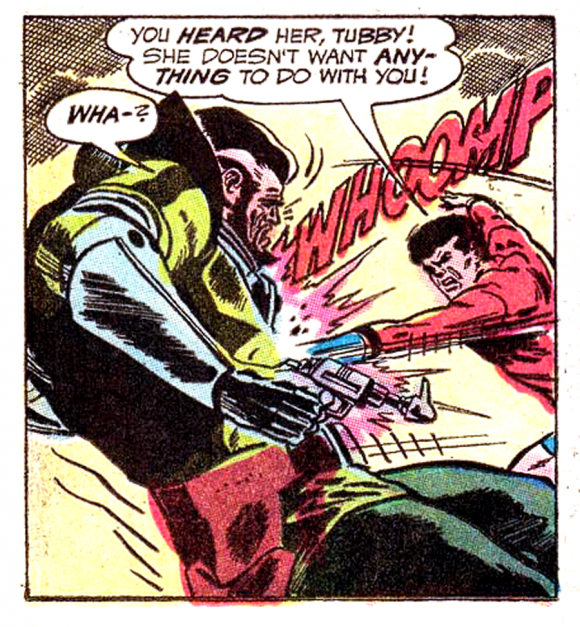 Steve Skeates would return to Aquaman a few years later in the pages of Adventure Comics, but he would never again write the character as the star of his own title. But despite Aquaman’s cancellation in 1971, material written for that series kept, uh, bubbling to the surface. Here, in Teen Titans #36 (Dec. 1971), Aqualad stars in a charmingly weird three-page back-up story written by Skeates originally done for the Aquaman book. It would be the final Aquaman-related installment by the “SAG” team (Skeates-Aparo-Giordano) to ever appear in a DC comic.