UPDATED 7/14/22: Is there a more summery superhero than Aquaman? Nay, I say. Nay! So I got to thinking about this fab piece from 2018’s AQUAMAN WEEK and decided to share it again. And when you’re done reading, grab your fave Aquatoy and head to the pool! Right on. — Dan

You dig action figures? Columnist Anthony Durso digs action figures. (Click here to see what I mean.) Here, he goes out on a wet limb with the TOP 13 AQUAMAN ACTION FIGURES — RANKED. — Dan

Even though Aquaman was a punchline to the general public for years (pre-Momoa), he has also been a part of ALMOST. EVERY. ACTION. FIGURE. LINE. featuring DC superheroes. So somebody must be hooked on the son of a lighthouse keeper, right? I can’t be the only one.

Aquaman has been one of my favorite DC heroes since before I ever picked up a comic book. The orange-and-green costume with a dash of yellow…it’s iconic. With or without the trident. Which, c’mon, has gotta be a bitch to lug around everywhere you go, no?

13. Fractal Armor Aquaman (Total Justice). Ten years after their legendary Super Powers line ended, Kenner released this infamous line of DC heroes in 1996. The Batman: Total Justice assortment consisted of then current JLA members in all their 1990s glory. So Aquaman was the long-haired, bearded, hook-handed version. Once again gathered to combat Darkseid (ala the Super Powers line), these heroes had something other than “Power Action” to help their cause. They had… “Fractal Armor”? Fractal Armor comprised snap-on attachments that would supposedly amp up a character’s powers. Aquaman’s armor was crab-like and he had a wrist gauntlet with a Blasting Hydro Spear. But is there a trident? Hook hand, armor, armor on top of that armor, hydro spear… alas, there was neither room in the package nor an extra hand to hold a trident this go around. 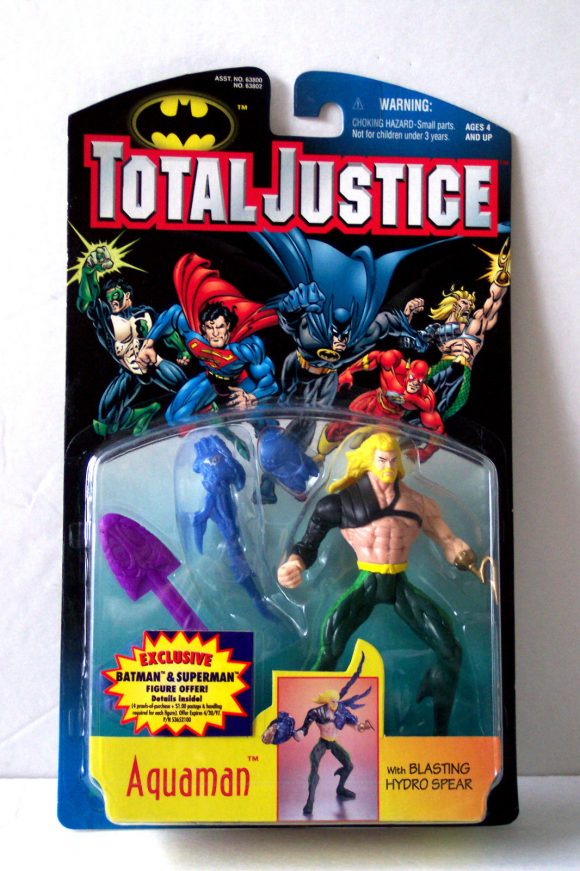 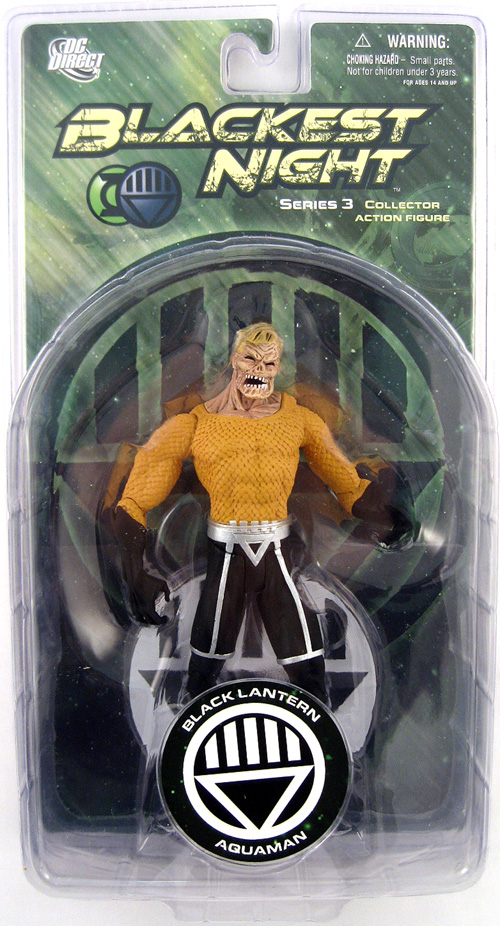 11. Aquaman vs. Black Manta (DC Pocket Heroes). Released in 2002-04, DC Pocket Heroes was DC Direct’s attempt to do 3 1/4-inch heroes and villains in a similar vein to the Mego Pocket Heroes of the ’70s, but with much more personality and a Silver Age look. Figures were paired up, often hero vs. villain, and featured on blister cards with occasional boxed sets showcasing larger groups. Aquaman was packaged with Black Manta. Trident? Only a small (ba-dum-bum) handful came with accessories. And although Aquaman didn’t, a shrimp fork might work in a pinch. I’m here all week, folks. 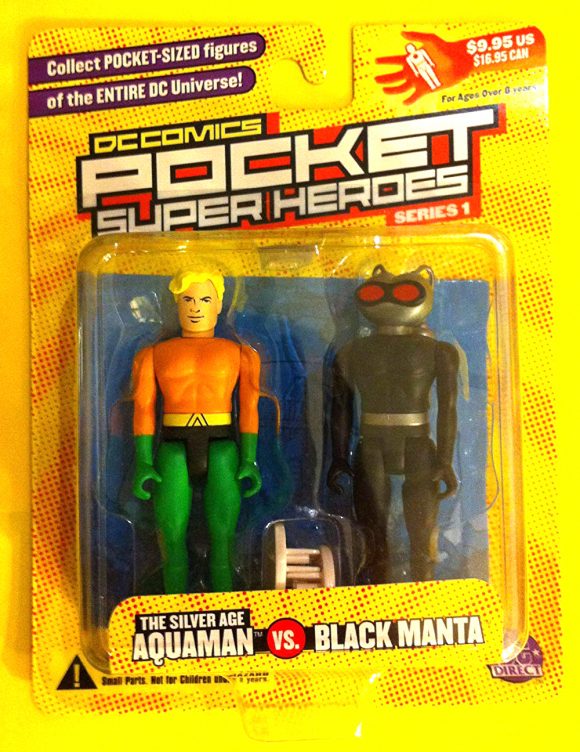 10. Ocean Warrior Aquaman (DC Universe Classics). DC Universe Classics were produced by Mattel and were an extensive and often eclectic look at the DCU. In addition to each main figure, the package would also include a “Collect and Connect” piece to build another figure. In 2008, Aquaman (both classic Arthur Curry and then-current Joseph Curry versions) was part of Wave 2 and featured the right arm for Gorilla Grodd. By the time Wave 7 rolled around, Mattel hit Aquaman again, but this time in his “Ocean Warrior” camo originally featured in his 1986 miniseries. The C&C piece was the upper/middle torso for Atom Smasher. Trident? Yup. The same one from Wave 1 actually. 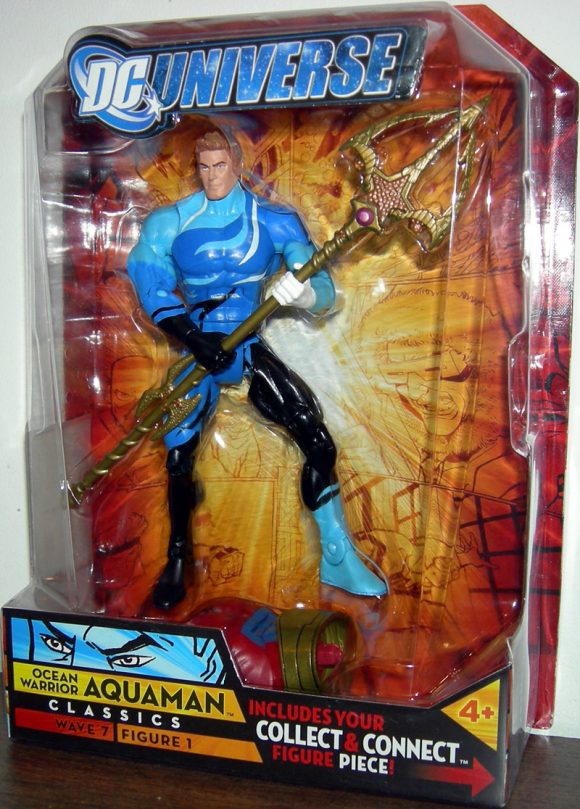 9. Aquaman (Justice League Unlimited). From 2003 to 2012, Mattel released a large assortment of figures based on the popular Justice League/Justice League Unlimited cartoon series. Over the years figures were released, re-released, repainted, and repackaged into multiple variations. Aquaman was once again the long-haired, bearded, hook-handed version and was released as the typical 3 3/4-inch figure, as well as a 10-inch version. Trident? Only in the 3 3/4-inch version. 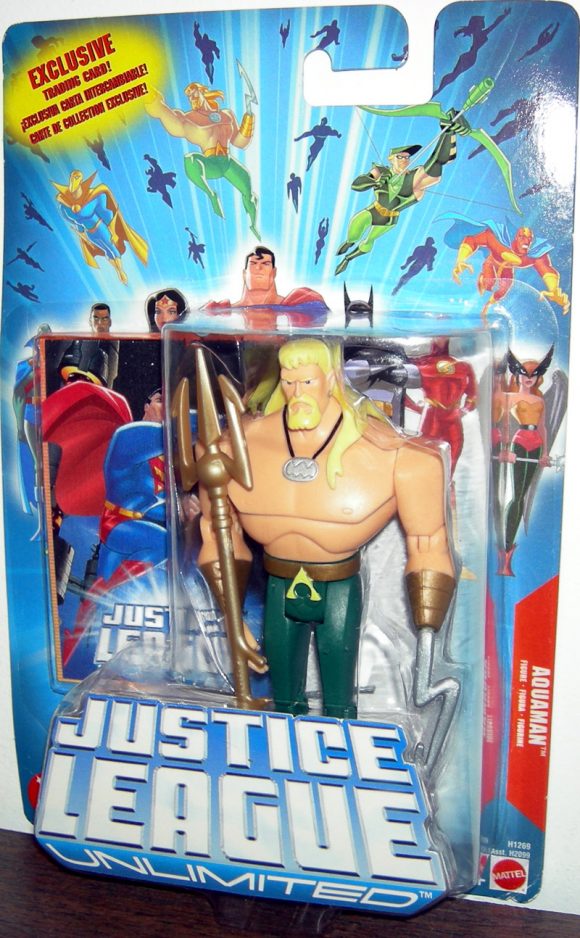 8. Silver Age Aquaman (DC Super-Heroes Collection). Back in 1999, Hasbro partnered with Target and released a series of modern Mego-like figures, albeit in 9-inch scale, similar to the Toy Biz/Marvel Famous Covers figures from the same period. But whereas the Famous Covers were about characters and designs from the ’90s, the DC Super-Heroes took their aesthetic from the Silver Age. Aquaman was released along with Green Arrow, Green Lantern, Superman and Martian Manhunter before the line switched over to Batman characters from Mattel, which cancelled the whole thing by 2002. Trident? No, but a bitchin’ display base based on the DC Bullet of the… Bronze Age? 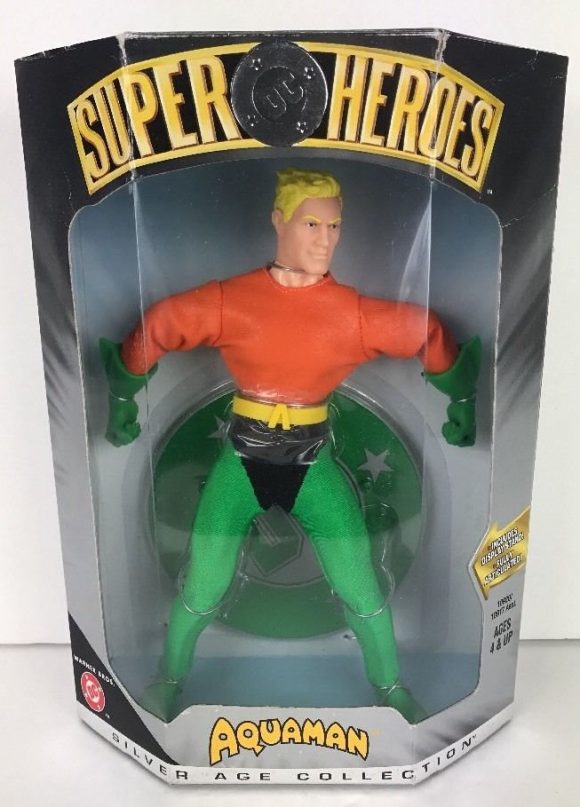 7. Aquaman on Ice (Lego DC Universe Super-Heroes). Lego began releasing mini-brick versions of DC Comics characters in 2011. Aquaman made his debut in 2013 as a guest star in the Arctic Batman vs. Mr. Freeze set. Since then, Lego Aquaman has appeared in several other incarnations and has gone from guest star to main hero in his own sets. He’s also gotten his own direct-to-video Lego feature, Aquaman: Rage of Atlantis. Trident? Check. 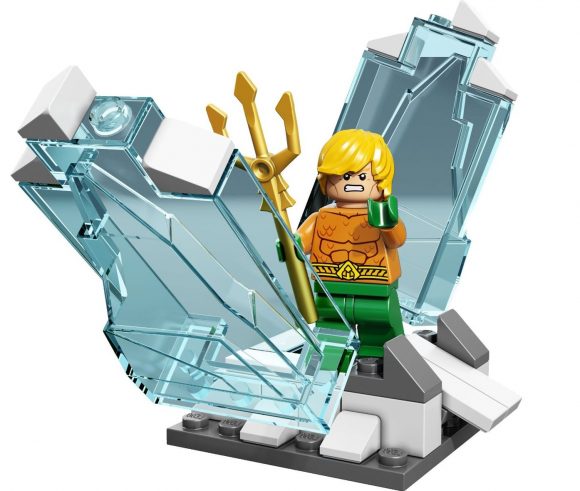 6. Sea Spear Aquaman (Batman: The Brave and the Bold.) OUTRAGEOUS! If your only experience with a cartoon version of Aquaman was seeing him as a passive passenger in Wonder Woman’s Invisible Jet (in various incarnation of Super Friends), you were thrown for a loop when the brash and bombastic Sea King made his debut in Batman: The Brave and the Bold in 2008. Aquaman appeared in a whale-whopping 11 episodes and has been called B&B’s breakout star. So it was only natural he’d be one of the original figures released by Mattel. Trident? Duh. It’s right there in the name. 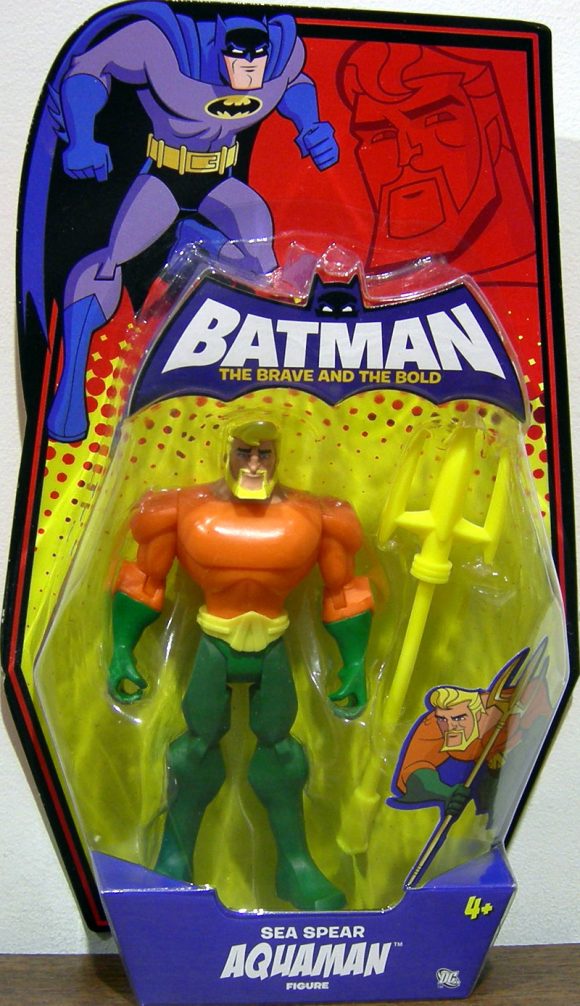 5. Super Friends Aquaman and Black Manta. In 2003, DC Direct released a series of 2-pack Super Friends figures, featuring one hero and their opposite villain from the Legion of Doom. Aquaman was paired up with his arch-nemesis Black Manta and both are spot-on interpretations of the style guides designed by Alex Toth. Trident? No, but Black Manta came with his neutron-eraser gun, as well as a miniature Black Manta Sub, with stand. 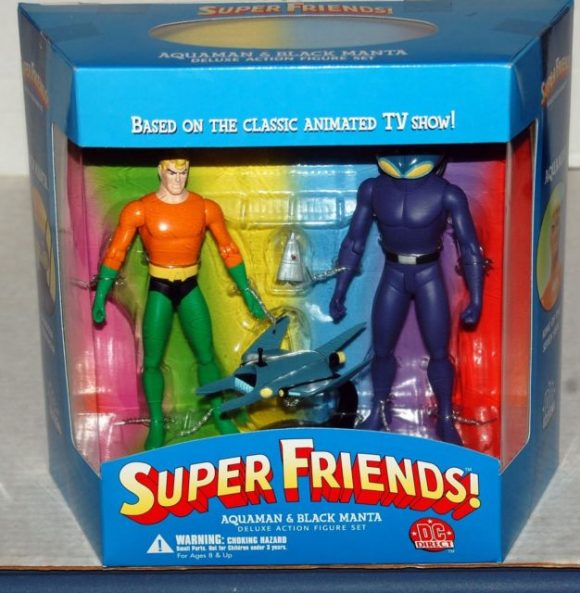 4. Captain Action Aquaman. In 1966, the Ideal Toy Co. “technically” released the first Aquaman action figure. I say “technically” because it really was just a costume in a box. You see, Ideal’s Captain Action belonged to some faux military regiment and he had the uncanny ability to disguise himself as other superheroes. By slipping on a rubber mask, putting on a costume, and arming himself with accessories (of which there were a ton), Captain Action could become Superman, Batman, the Lone Ranger, Aquaman or any other number of heroes. Kinda cool but also kinda lame. By 1968, the good Captain was gone — but not before spawning a sidekick in the guise of Action Boy who, like his mentor, could assume the identities of established heroes, including Aqualad. There was also Mera, who had her own figure as part of Captain Action’s sister line of Super Queens dolls. Trident? Not only did he come with his trident, but CA Aquaman also came with a Swordfish Sword, Conch Horn, Knife (and a belt with sheath) and, um, swim fins. 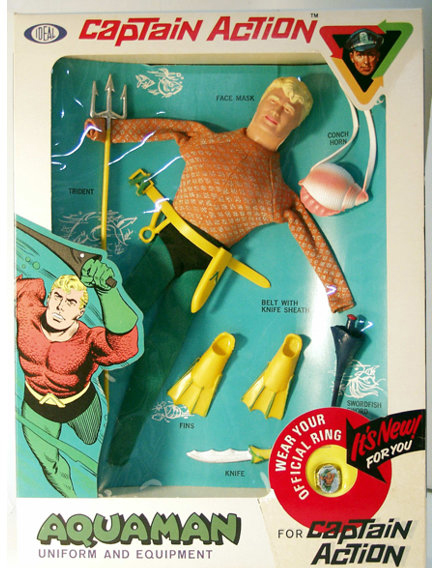 3. Silver Age Aquaman and Aqualad. Aquaman was given the Deluxe Figure Set treatment (similar to the Flash and Wonder Woman) by DC Direct in 2001. Paired with his teenage ally, Aqualad, this smiling Silver Age version of Arthur Curry also comes with his sea horse, Storm, and a faux-wave base for display, as well as interchangeable hands (for “exciting action poses”). The set is practically a Filmation cartoon come to life… in inanimate, three-dimensional form. Trident? Yes, although it wasn’t present in the Filmation cartoons. 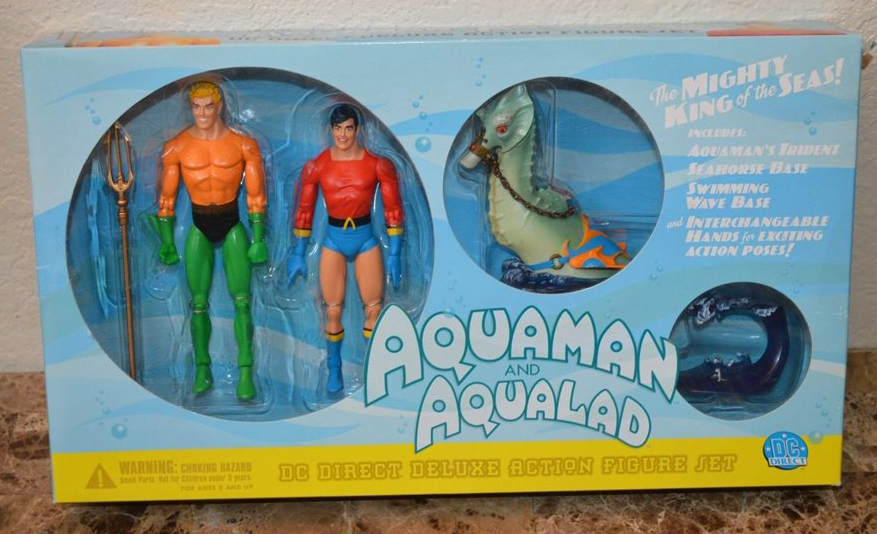 2. Aquaman with Power Action Deep Sea Kick (Super Powers). Aquaman was part of the first wave of Super Powers figures produced by Kenner in 1984, along with Superman, Batman and Robin, the Flash, Green Lantern, Wonder Woman and Hawkman. Each figure had its own “Power Action” feature: When you squeezed Aquaman’s arms, his legs would kick, simulating a swimming motion (which was NOT AT ALL like the Flash’s Power Action Lightning Legs). Trident? Like several other Super Powers figures, Aquaman does come with an accessory. 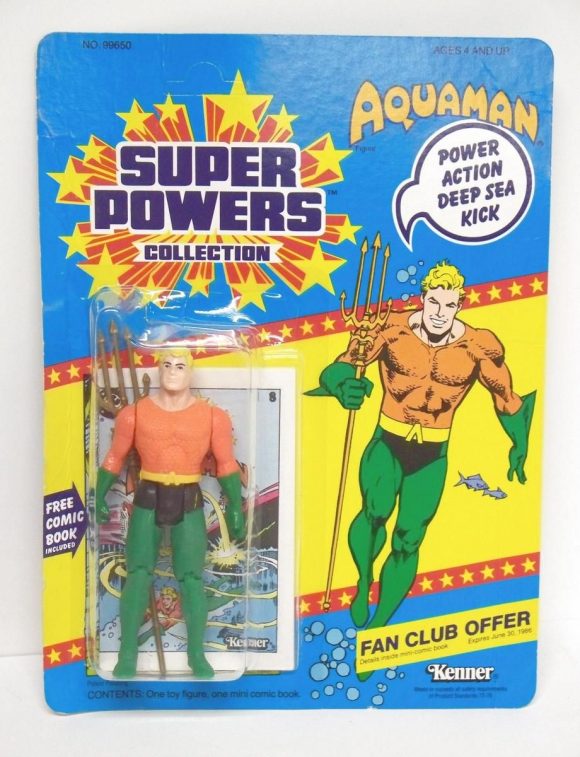 1. Mego Aquaman. When Mego started releasing 8-inch action figures in 1972, Aquaman was part of the first wave of World’s Greatest Super-Heroes, along with Superman, Batman and Robin. Not Green Lantern, not the Flash, but Aquaman. His inclusion in the initial offering was more than likely due to reruns of the Filmation cartoons that were popular in syndication, as Super Friends wouldn’t hit airwaves until 1973. Whether it was in a solid box, window box, blister card (both Kresge and second-issue versions), Aquaman was there from the beginning to the very bitter end. So bitter that leftover figures were cobbled together with Aquaman heads, red Spider-Man bodies, the occasional blue Batman gloves and/or glow hands and slapped on a Superman card with yellow tape covering the Man of Steel’s logo (known as Franken-Aquaman on today’s aftermarket). Aquaman was also popular enough throughout the WGSH run for Mego to give him a Great White Shark playset in 1978 to try and ride the wave of Jaws fever. It sank. But today, that very set is worth a small treasure. On a personal note, Aquaman was the only Mego superhero I owned that wasn’t part of the Batman family. If memory serves me right, I got him for Christmas in 1974. Purple box. Trident? Um, no. Mego was bare bones and Green Arrow, Conan and Thor are really the only ones that got accessory treatment. But when Mattel tried to revive the Mego concept as Retro-Action Super-Heroes in 2010, Aquaman did indeed come with a trident.