BURIED TREASURY: The AQUAMAN Tabloid Comic That Should Have Been

Home » COMICS HISTORY » BURIED TREASURY: The AQUAMAN Tabloid Comic That Should Have Been

Our REEL RETRO CINEMA columnist Rob Kelly’s once again doing double duty here: He’s not only the world’s foremost authority on Aquaman, as evidenced by the late Aquaman Shrine — which lives on as a Twitter feed — he’s also an expert on the treasury format popularized in the Bronze Age. Just check out his terrific TreasuryCast on the Fire and Water Podcast Network. Anyway, I asked him to devise a fantasy All New Collectors’ Edition for Aquaman, seeing as how the King of the Seven Seas never got one in the ’70s. Go on and dive in. — Dan 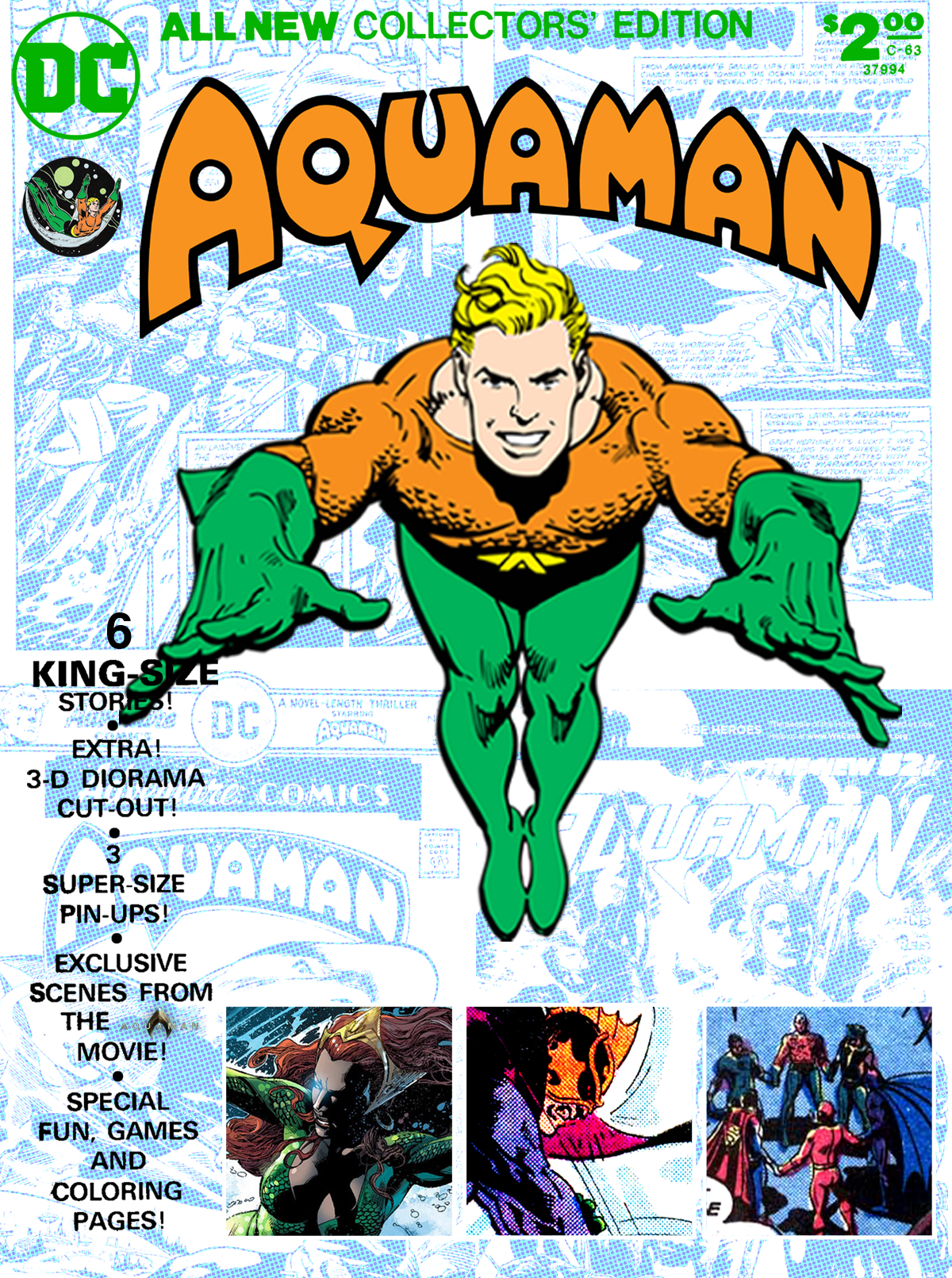 Main image by Jose Luis Garcia-Lopez. Rob put this together with his mad skills.

As an Aquaman and treasury comics mega-fan, it has always been a source of irritation to me that, during the format’s heyday of the 1970s, DC Comics never saw fit to give the King of the Seven Seas his own oversize tabloid comic. Superman, Batman, Captain Marvel, Rudolph the Red-Nosed Reindeer, Dick Tracy, even Welcome Back, Kotter were given that honor, but any Aquaman fan who wanted to see his adventures in a giant size had to live with his appearances in the Justice League of America and Super Friends collections.

But now with an honest-to-Neptune Aquaman movie out this week, it’s the perfect time to rectify that oversight. With nearly 80 years of Aquaman comics to pick from, DC could put together a slam-bang treasury comic that would work as a wonderful keepsake for fans of the character, new and old. To get the ball rolling, we here at 13th Dimension hereby present our take on what an Aquaman treasury comic might look like.

Before we get to the stories, a few notes on the process: I decided to keep this imaginary treasury to a page count that the editions generally used (84), which to some extent dictated my choices. Since most current comic-book stories are roughly 20 or so pages, I leaned more heavily toward older material so I could fit more stories in. This also meant I had to leave out work by some of my all-time favorite Aquaman artists—Nick Cardy, Craig Hamilton, Patrick Gleason, etc.—but heavy is the head that wears the crown. Suffice it to say, this treasury would also feature a cover gallery where these and many other fine creators would be represented.

With that caveat out of the way, here are my picks for the stories that could make up All New Collectors’ Edition: Aquaman:

— “Aquaman,” from More Fun Comics #73, by Mort Weisinger and Paul Norris. This is where it all began, so any and all retrospectives of the Sea King have to start with this quick little 8-page adventure. Plus: Nazi punching! 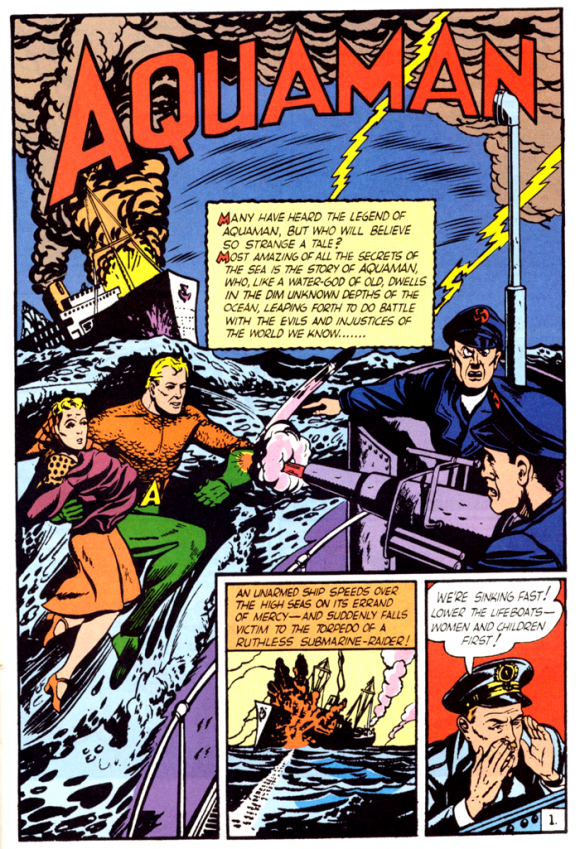 — “The Undersea Lost World,” from Adventure Comics #137, by Otto Binder and John Daly. I couldn’t pass up the opportunity to give Aquaman artist John Daly—pretty much forgotten by comics history—a chance to shine in this collection. He was the artist that carried the Aquaman strip from the 1940s to the 1950s, and his clean, smooth line and solid layouts gave the Sea King’s adventures a distinctive look. Of all the stories he drew, The Undersea Lost World is my favorite, aided immeasurably by eye-popping color. 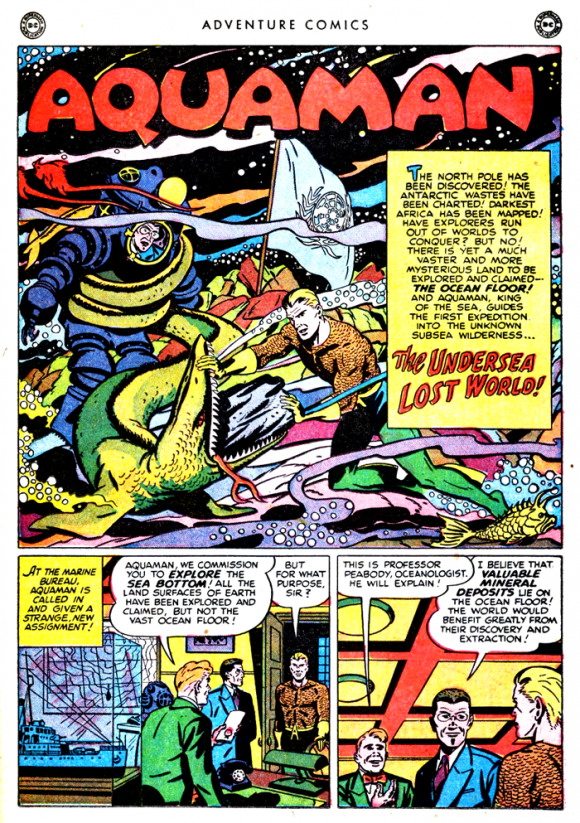 — “How Aquaman Got His Powers,” from Adventure Comics #260, by Robert Bernstein and Ramona Fradon. For many years, DC didn’t bother to delineate between the Golden Age version of Aquaman and the later member of the Justice League and Super Friends. Different elements of the Aquaman mythos would come and go like the tide, but the clear starting point for the Silver Age Aquaman is this story, which gave him a new origin, the one that would (essentially) remain unchanged to this day. It features the work of one of the finest comic-book artists of all time, the legendary Ramona Fradon. No history of Aquaman is complete without it. 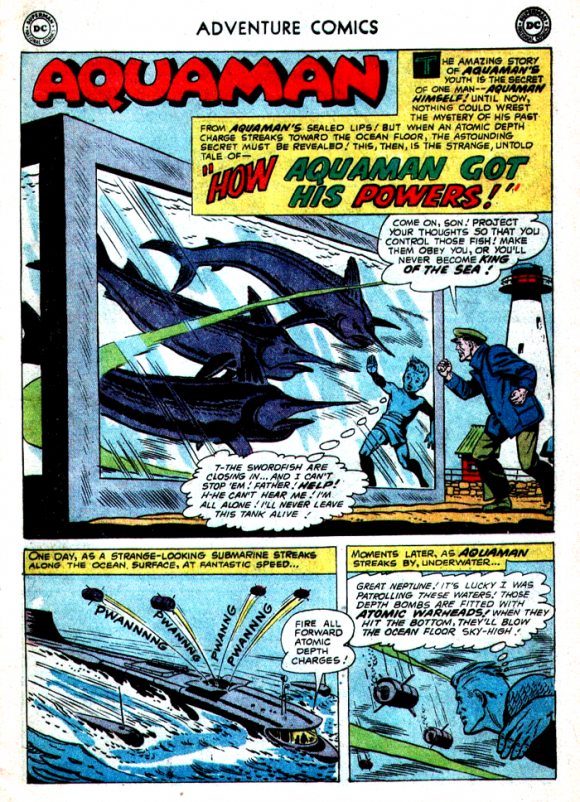 — “The Great Identity Crisis,” from Justice League of America #122 by Martin Pasko, Dick Dillin, and Frank McLaughlin. Part of the appeal of Aquaman for me was his interaction with the rest of the DCU, as a founding member of the Justice League of America (my favorite comic book growing up) and a Super Friend. There aren’t that many Aquaman-centric JLA stories, but this is a great one: a casebook tale explaining how Dr. Light (before he became a joke/nightmare) exploited the Leaguers’ not knowing each other’s secret identities to almost take them out. Aquaman gets some really great moments here, and overall it’s a crackling, fun adventure. 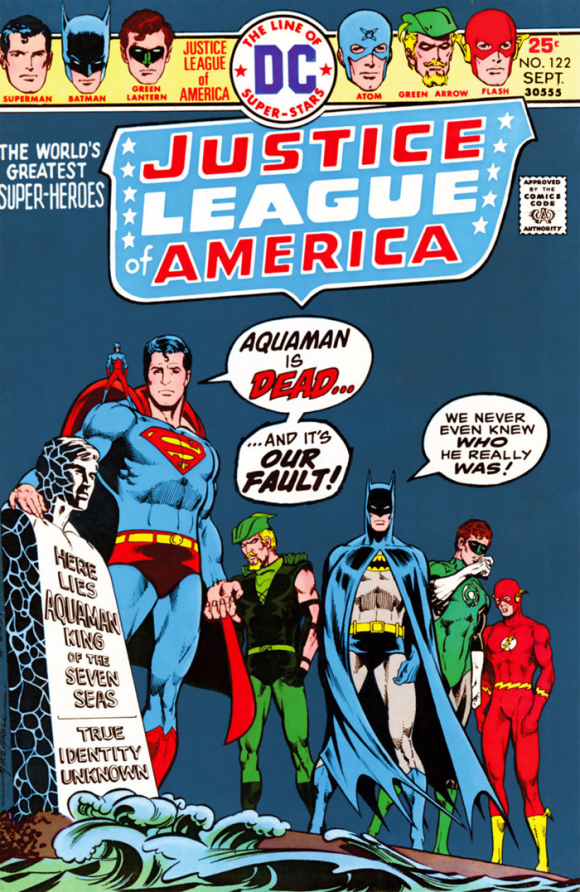 — “And Death Before Dishonor,” from Adventure Comics #444 by Paul Levitz, Gerry Conway, and Jim Aparo. The Sea King’s run in Adventure Comics #441-452 remains, for me, the, er, high-water mark for the character. Drawn by my all-time favorite Aquaman artist (and all-time favorite comic book artist, period), Jim Aparo, these stories deliver high adventure, pulpy drama, and fights with some of Aquaman’s greatest foes. I really could have picked virtually any story from this run, but I went with this one for the final panel, one of my favorite single Aquaman images, ever. 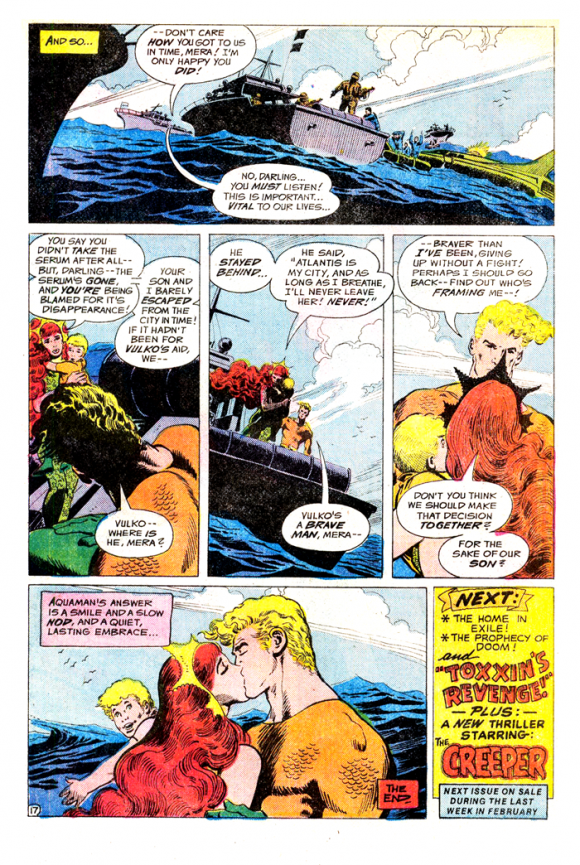 — “The Others” from Aquaman #7 by Geoff Johns, Ivan Reis, Joe Prado and Rod Reis. The New 52 version of Aquaman helped cement the character back into the DC pantheon, a place where he unquestionably belongs. Geoff Johns’ superstar status helped a new audience give the character a chance, and once they saw what the Sea King was all about, they liked it. There’s a direct line from these stories to the Aquaman movie, so an issue from their outstanding run had to be included in this book. I picked this one because it features this single-page shot of Aquaman in action, which is the art team of Reis/Prado/Reis at their best: 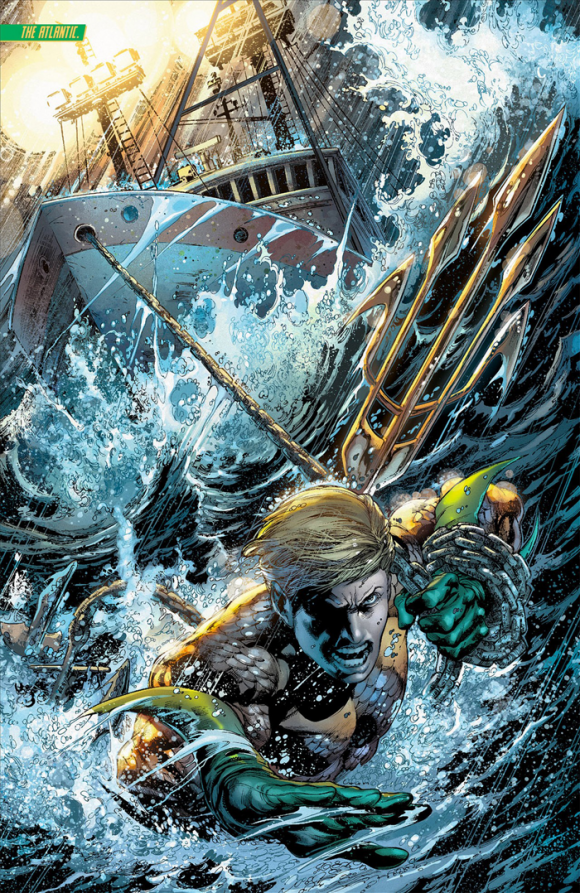 Throw in the aforementioned cover gallery and a “behind the scenes” feature on the movie, and you’ve got the makings of a superb Aquaman treasury edition. After a brief return in the late 1990s, DC seems to have permanently abandoned the format, but I still believe if you stocked an item like this in movie theaters and/or near the Aquaman movie tie-in toys at places like Target, you’d have a best-seller on your hands — the kind of thing fans of the Sea King, new and old, would … well … treasure.