On the racks during Batmania…

Batman, starring Adam West and Burt Ward, debuted on ABC-TV on Jan. 12, 1966 — 57 years ago. We’ve got a number of columns for you this year, so make sure you check out the links at the bottom of this piece. Holy promo! — Dan

This is a big date on the 13th Dimension calendar every year, but this time around I wanted to focus not just on the show but on the Batman comics of 1966, as well.

First, a little background, though I figure a lot of you reading this are well aware: In 1964, DC put Batman into the hands of editor Julius Schwartz so that he could work his revamp magic on the Dynamic Duo like he did on the Flash, Green Lantern, et al. 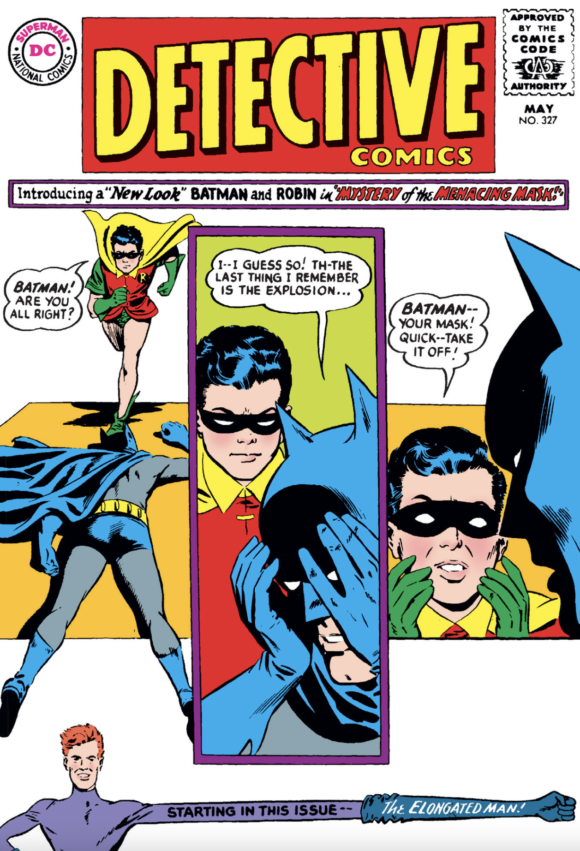 The “New Look” Batman featured not just a redesign of the characters but a complete overhaul of the art style. (Thank you, Carmine Infantino.) The stories were also designed to be more grounded, dispensing with the bizarre aliens and wacky storylines of the late-’50s/early-’60s. But it was still the Silver Age, so the stories continued to have a lot of fanciful elements.

Fast forward, though, to January 1966: The TV show took the nation by storm and DC soon pivoted to telling campy stories on the page. The fans in the letters columns decried it and Schwartz himself was resistant, so the Batman comics of 1966 were kind of a mix, particularly since the production schedule meant a delay in getting some of those campier stories into print. (The stories were pretty bright either way, but a lot of them tried really hard to match the tone of the show.) 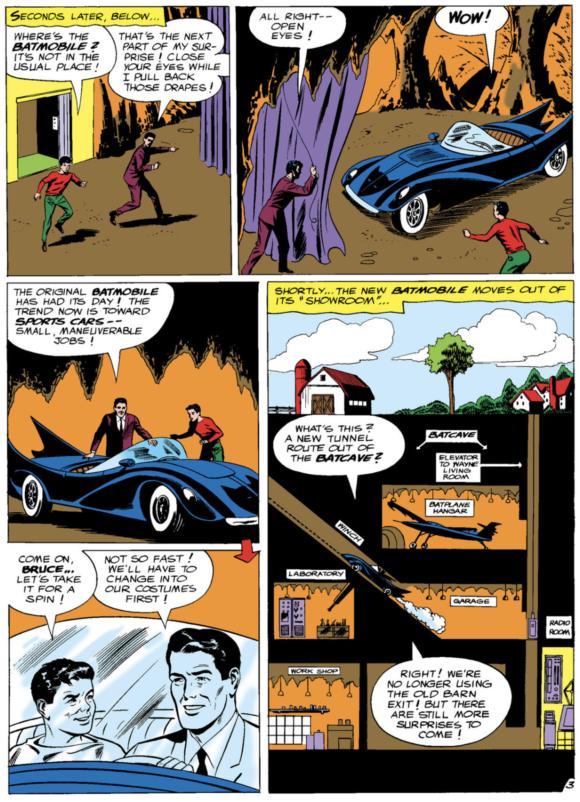 In any event, I’ve put together a 13 COVERS gallery that gives you an overall feel of what it was like being a Batman comics reader in 1966. I’ve mostly stuck to the main title and Detective Comics, though I’ve tossed in some other examples that portray the impact of Batman’s popularity. (I’ve left out all the paperbacks, magazines and comics like The Adventures of Jerry Lewis because I wanted this to be just about the main Bat-comics line.)

So here goes — 13 COVERS: THE WORLD OF BATMAN IN 1966, in no particular order. (Publication months in parentheses):

Batman #179 (January). The Riddler was the debut villain on the show and the first villain to appear on a Bat-cover after the show premiered. Planned? Coincidence? You tell me. 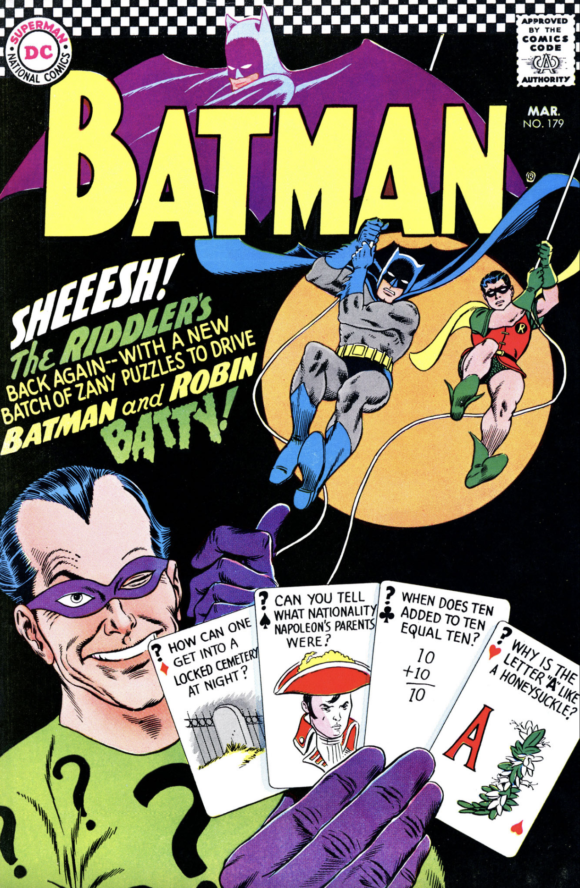 Detective Comics #349 (January). The first Detective to be released after the show first aired featured Batman battling the Blockbuster, with a gritty cover by Joe Kubert. 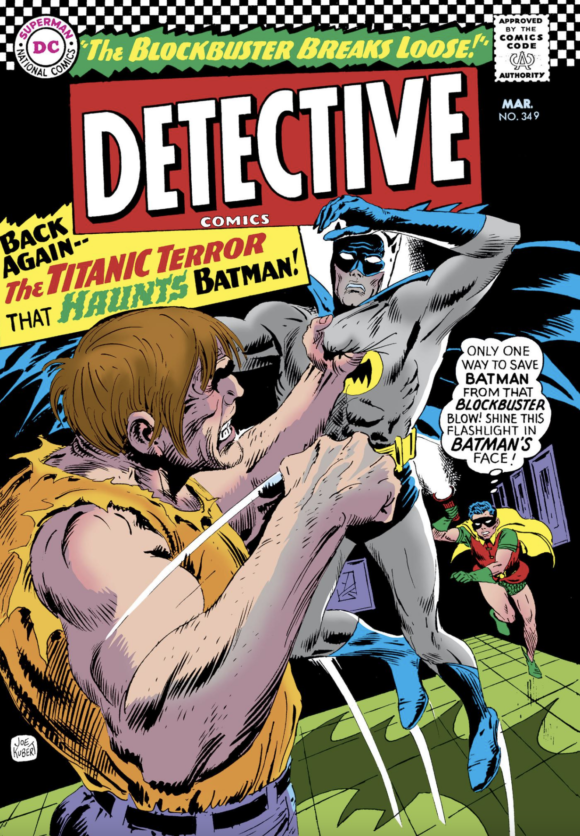 Batman #180 (March). One of the most dramatic Bat-covers of the Silver Age, and a terrific story, to boot. It was adapted by Japanese artist Jiro Kuwata as a manga, and that version was turned into a segment on Batman: The Brave and the Bold. The villain of the original story was Death-Man but Kuwata rechristened him Lord Death-Man and he’s since become a cult favorite among modern readers, thanks in part to Grant Morrison. 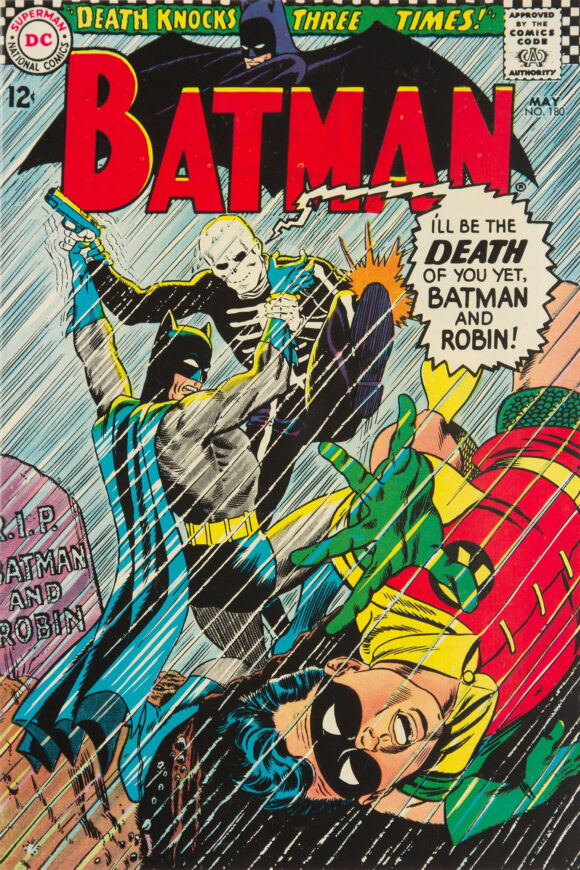 The Brave and the Bold #68 (August). Speaking of The Brave and the Bold, Batman became the star of the team-up book, with stories that ranged from the relatively straightforward to this insane one that only shows that it’s hard to do camp well. (Edited by George Kashdan.) 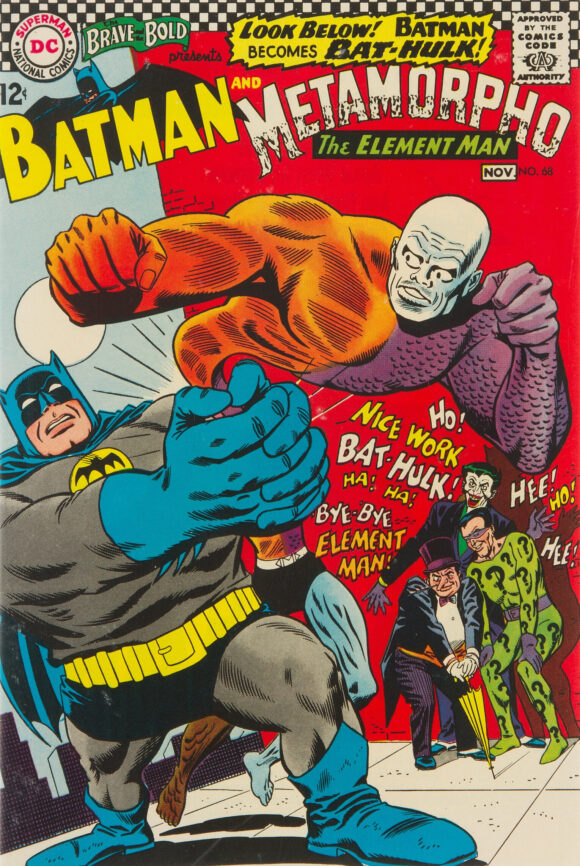 Detective Comics #356 (August). The Inside Story of the Outsider is one of the watershed stories of the period — especially since it was revealed that the villain was actually the presumed-dead Alfred. (If he’s on TV, he’s gotta be in the comics, y’know?) 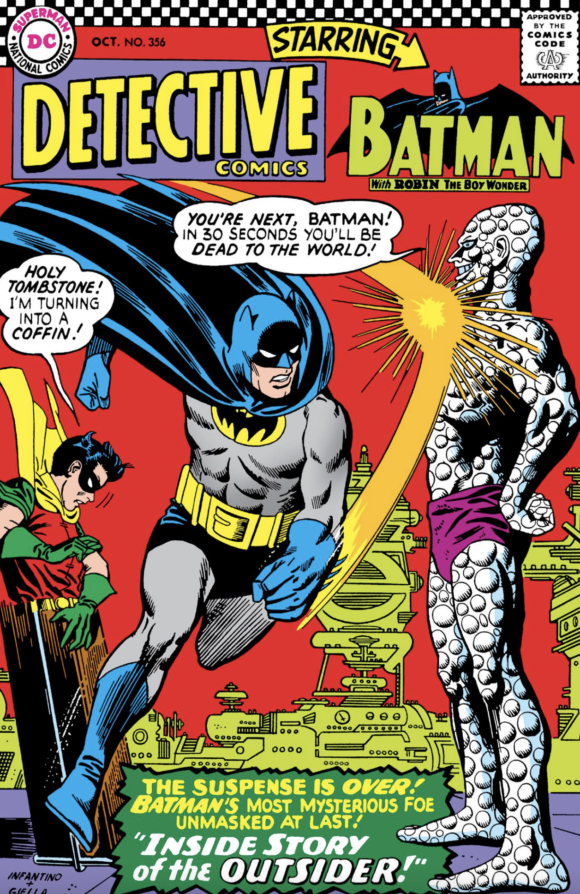 Batman #181 (April). The first appearance of Poison Ivy — who almost made it onto the show as Catwoman’s sidekick in the second season. Instead, the producers redeveloped the character as Pussycat, who was played by Lesley Gore. (Click here for a recent Batcave Podcast episode on this issue and its connection to the show.) 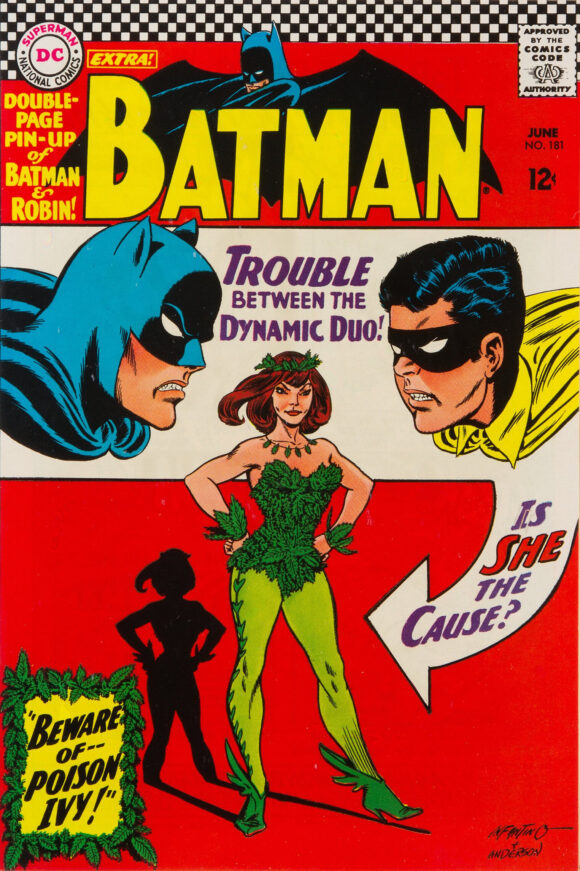 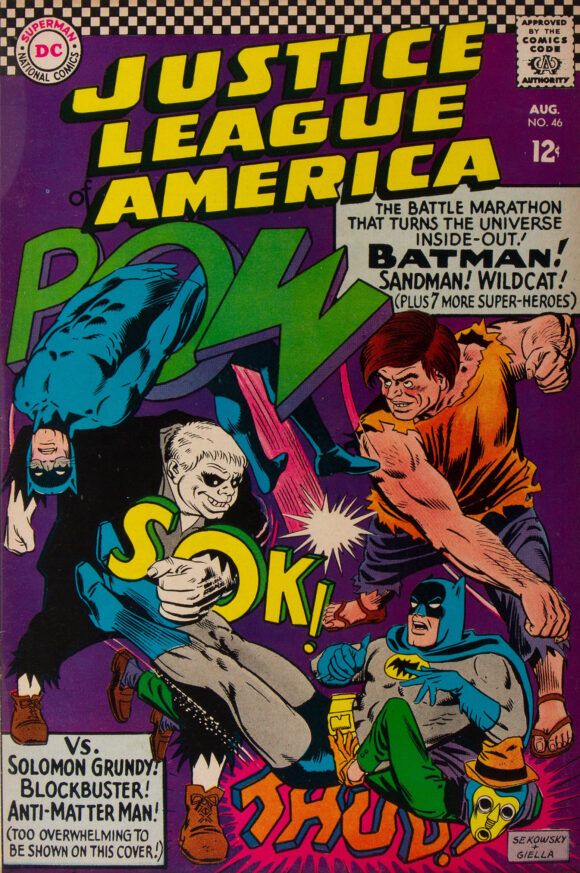 Detective Comics #358 (October). It’s very much of its time but the Spellbinder is one of the great villain designs of the era (or any other). Off the hook! 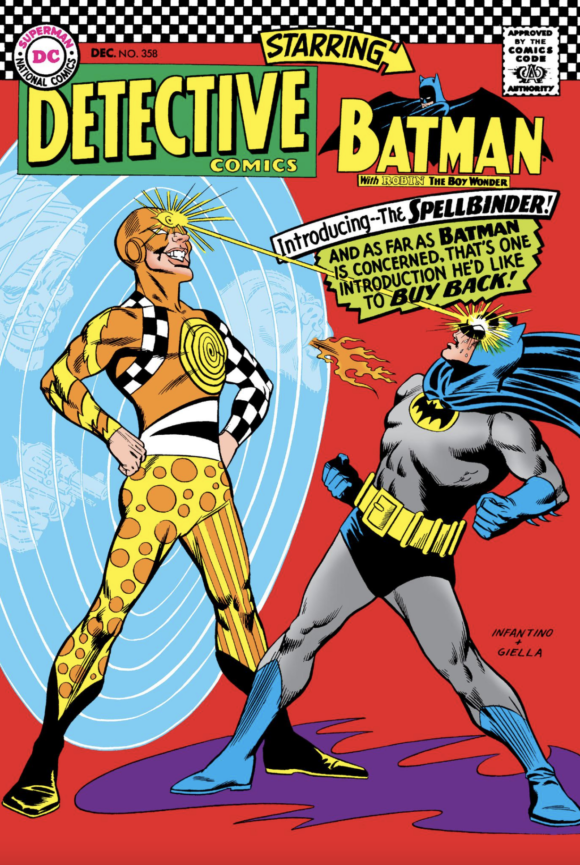 Batman #186 (September). Gaggy the Dwarf! The Joker’s ridiculous sidekick is beloved by many, loathed by others. He still pops up every once in a while, usually in a satirical context like the recent “pregnant Joker” story that oddly got some folks whipped into a lather. 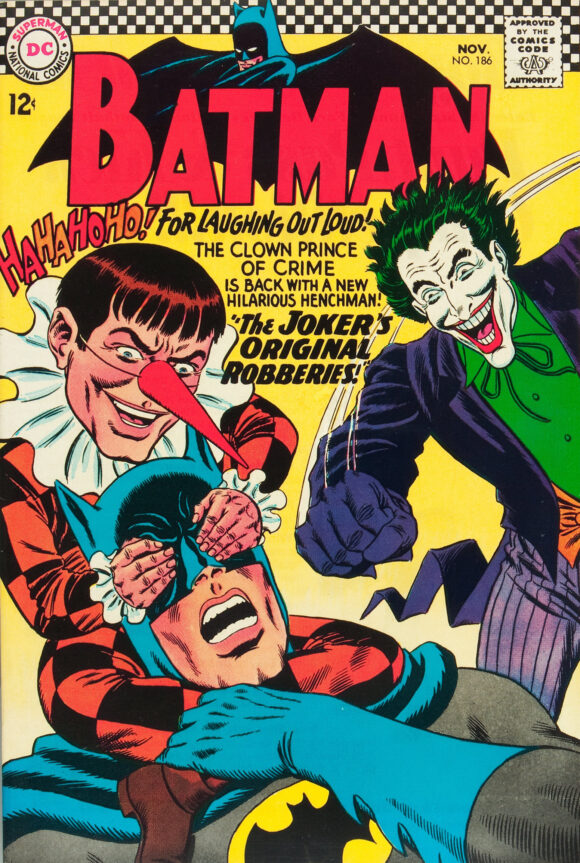 World’s Finest #160 (July). The World’s Finest logo was traditionally composed of standalone, capital letters. With Batmania in full swing, our heroes’ wordmarks were added to the covers — with Batman getting higher billing than the company’s flagship character Superman. This would have been unthinkable before then. (Edited by Mort Weisinger.) 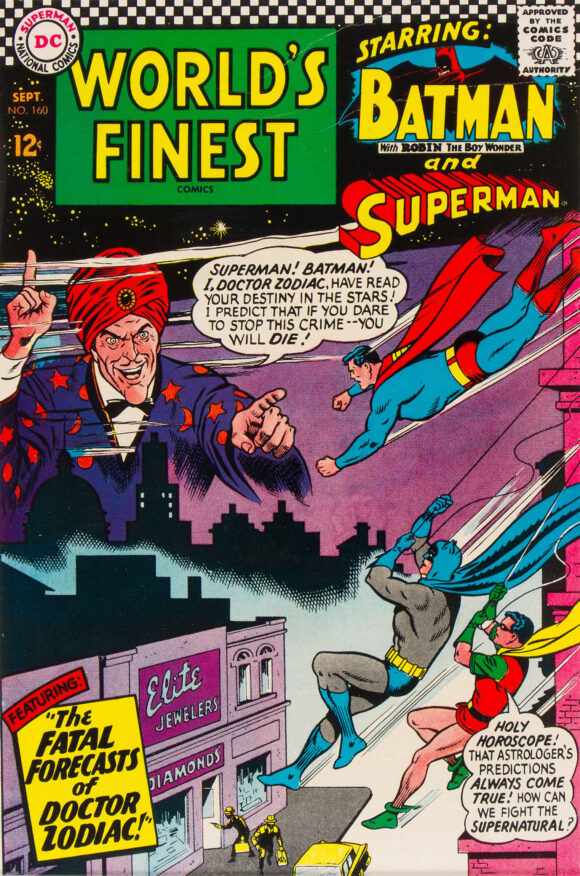 Detective Comics #359 (November). Since Batgirl was created with the show in mind and because she didn’t appear on the program until the fall of 1967, a lot of fans forget that she actually made her comics debut in 1966, the Year of the Bat. Batman #188 (October). This is the “pinnacle” of Batman’s camp period in the comics. I wrote a column about it — you can check it out here — but rest assured that the Eraser was only the tip of the pencil, as it were. 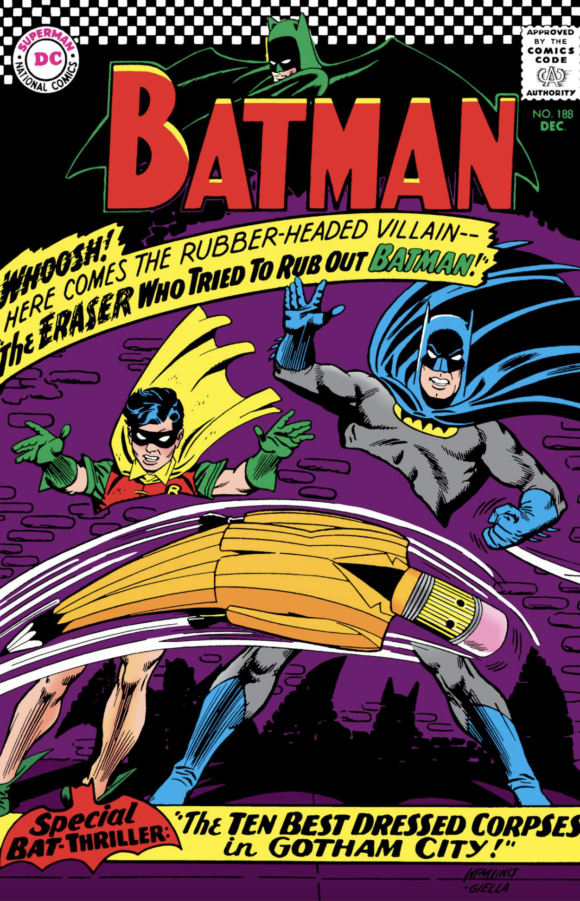