Part 2 of our look at the life, death and life of Alfred — in the Silver and Bronze Ages…

DC this week is celebrating the legacy of Alfred the butler, who was killed off recently during Tom King’s run on Batman. The one-shot — Batman: Pennyworth R.I.P. — features a number of creators and mourns the death of the ultimate gentleman’s gentleman.

Of course, longtime readers have been down this road before — in 1964, when DC first decided to eliminate Bruce Wayne’s aide de camp. The fan reaction was swift and strong — and you can click here to check it out in Part 1 of this two-part look at Alfred’s first (supposed) foray into the afterlife. 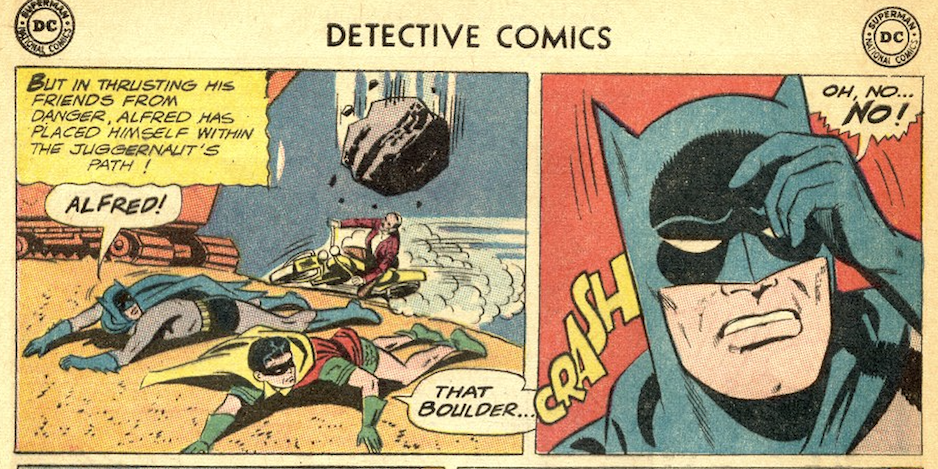 Funny thing is, this original Death of Alfred Saga (a term I coined just now) aka The Outsider Saga (another term I just coined), was a Silver Age landmark yet it was as much a part of my Bronze Age upbringing as many of the major stories published in the ’70s. That’s because in the days of 100-Page Super Spectaculars, DC reprinted Alfred’s death by falling boulder (from Detective Comics #328) in 1973’s Detective Comics #438 — and the stories that followed saw new life in a run of Batman and Detective issues, starting with Batman #254.

Whether you read it in the 1960s or the ’70s, the Death of Alfred Saga holds up as a surprisingly bright, entertaining, yet eerie series of stories that ultimately revealed — SPOILER ALERT — that the Dynamic Duo’s trusty ally wasn’t dead at all, but had been transformed into the villainous Outsider, a being with seemingly magical powers who tormented Batman and Robin on and off for almost two years.

These stories were whiz-bang material, featuring, among other adventures, Batman and Robin battling a crew called the Grasshopper Gang; fending off a possessed Zatanna; fighting Blockbuster; and going to war with their very own arsenal, including a Batmobile that came to life like a bucking bronco. The Outsider, unlike the rest of Batman’s rogue’s gallery, always seemed to get the upper hand on our heroes. Not just that, it also marked the first time the Caped Crusader dealt with a recurring storyline in the comics. 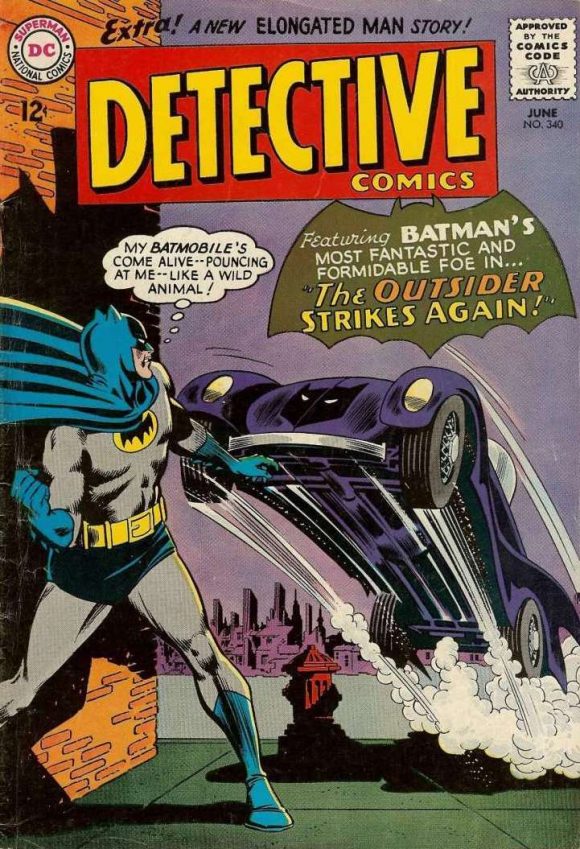 Thing is, the Outsider, who was first referenced in October 1964’s Detective Comics #334, wasn’t originally supposed to be Alfred at all. And Alfred was never supposed to come back.

“About the same time that they were going about adapting Batman to television, (producer) William Dozier had recently renewed his familiarity with the cast of characters by reading the stories featuring the Joker, Catwoman, and the Riddler — which provided the inspiration for three of the scripts,” the Batman comics editor at the time, Julius Schwartz, wrote in his 2000 autobiography Man of Two Worlds. “Dozier decided that there were a few changes that I had made that he wasn’t too thrilled with.

“Foremost of all, Dozier insisted Alfred be part of the ongoing TV continuity, and so he contacted DC and told them to bring the butler back,” Schwartz continued. “Fortunately, at the time I ran a series of stories featuring a supernatural character called the Outsider, who was inspired by the title of an old H.P. Lovecraft story, and by brainstorming it with (writer) Gardner Fox, we worked out a way to reveal that the Outsider was really Alfred the butler — thus enabling us to quite literally bring him back from the dead no worse the wear.” 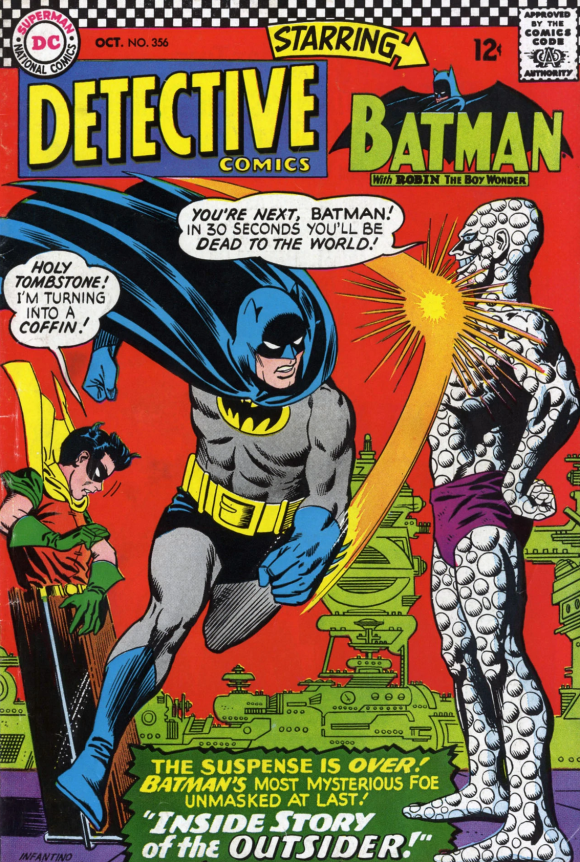 The resolution played out in Detective Comics #356 — Inside Story of the Outsider! by Fox, Sheldon Moldoff and Joe Giella — which was released in August 1966, about eight months after Batman debuted on television, with a very fit Alan Napier ensconced as a crucial part of the Caped Crusader’s team.

The Outsider stories were sprinkled across nearly two years, interspersed with other Bat-fare. But in the ’70s, you were able to read them in serial fashion, starting in ‘Tec #438 and running through Batman #254, Detective #439, Batman #255 and Detective #440. (One installment was printed later in Batman Family #9.)

Not just that, DC brought back the Outsider in 1977’s Batman Family #13, in which the again-afflicted Alfred takes on Robin, Batgirl and Man-Bat. It’s a real corker by Bob Rozakis, Don Newton, Marshall Rogers and Bob Wiacek. 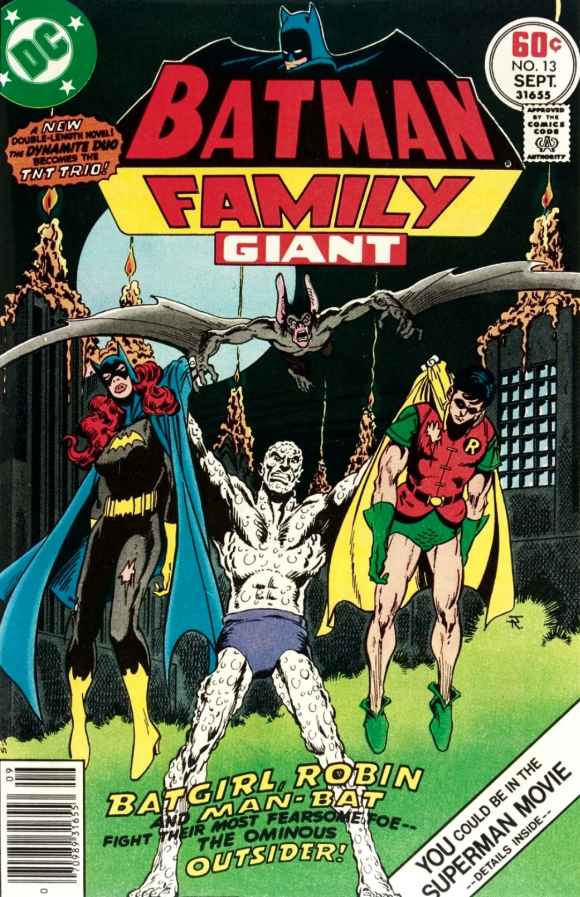 With Marv Wolfman and Irv Novick’s The Lazarus Affair finally getting collected as part of March’s hardcover Tales of the Batman: Marv Wolfman (click here), The Outsider Saga/Death of Alfred Saga is the last great Batman run never collected by DC in color. I would pay cash money for a hardcover or paperback that featured all of these stories, as well as those starring alternate versions of the Outsider that we’ve seen over the years.

It’s not likely but hey, anything’s possible. I mean, at the end of Mattel’s DC license run, the manufacturer produced an Alfred action figure with four heads: classic, Napier, Michael Gough… and the Outsider! 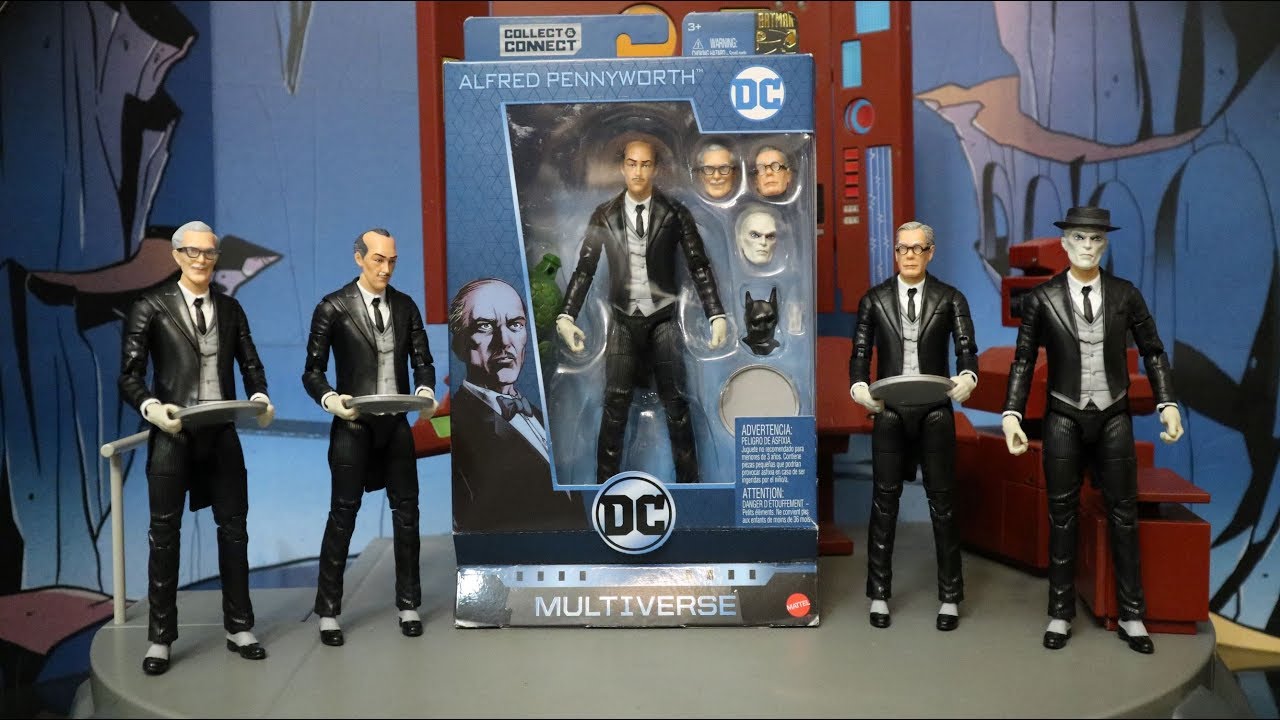 In the meantime, I want to pick up an issue of Batman or Detective sometime soon and find a shadowy figure tormenting Batman, a villain with seemingly mystical powers who keeps getting the upper hand on the Dark Knight — who then discovers that Alfred’s grave is empty…

— PART 1: How Fans Reacted to THE DEATH OF ALFRED — The First Time Around. Click here.