You Should Be Reading This: Alex de Campi’s GRINDHOUSE

Home » RANDOM STUFF » You Should Be Reading This: Alex de Campi’s GRINDHOUSE

Menachem Luchins shines the spotlight on a book you might not be reading — but should. 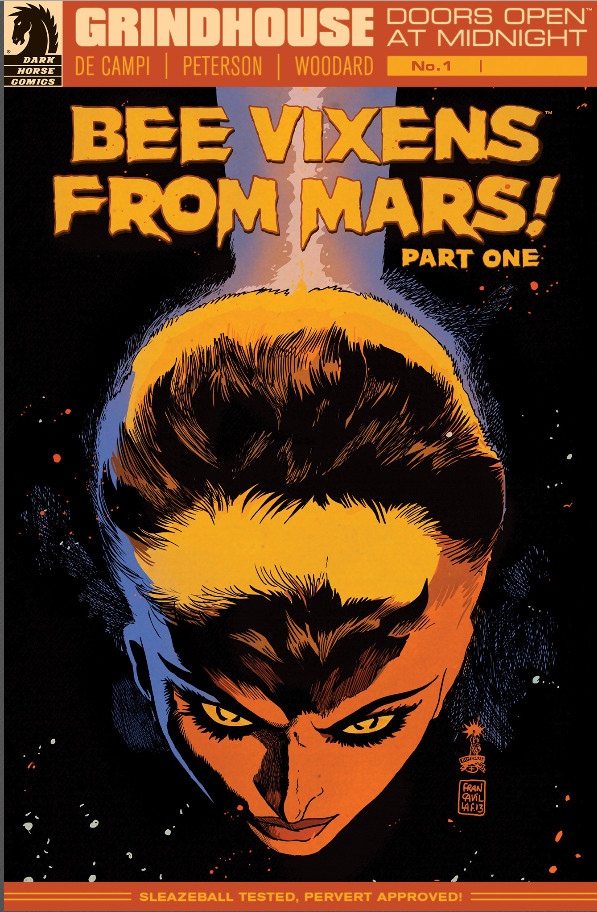 There are certain genres or styles that seem to defy categorization; a certain feel or vibe that a movie or comic can pull off that is hard to put into terms. Sure, you can quantify what it is about each one but taken as a whole there are just too many variations to fit one theme. Yet it does.

Grindhouse is one of those. This cheap and visceral and cheesy and shocking genre of film is just such a hard term, for me at least, to pin down. If you wanted to, you could say Quentin Tarantino has made his career out of trying to pin it down himself.

As far as I’m concerned, Alex de Campi has not only defined Grindhouse as a style in her latest series, but she has nailed it down, super-glued it, and put a round or two from a howitzer in it just to be sure.

An eight issue mini-series, every two issues of Grindhouse: Doors Open at Midnight offers readers a complete story, its every flavor and moment pulled from the golden rubbish heap of grindhouse film. The first arc, “Bee Vixens From Mars!“ features inter-planetary giant bees, an eye-patch wearing, cigar smoking lady motorcycle cop and some truly gratuitous use of both honey and blood. “Prison Ship Antares” puts us on a ship full of lady prisoners being sent to colonize a distant planet, if they can survive the machinations of the mad warden.

As you know, I avoid spoilers here because I really want to get you to READ the comic, so let’s just get into why it’s so great.

Firstly, it was a stroke of genius to make these stories two issues each. There is a level of cheesiness and absurdity in these books that could lose steam in an extended series: De Campi makes each story like a B-movie chick’s skirt — long enough to cover the topic but short enough to be interesting.

Secondly there’s the art. Shifting the artist for each storyline means that we get a very specific, intense and unique feel for each. Chris Peterson killed it on the Bee storyline: 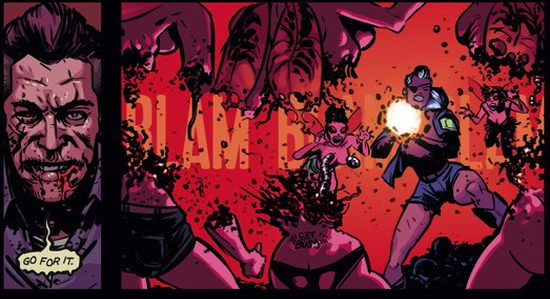 And Simon Fraser did a whole other thing out in space: 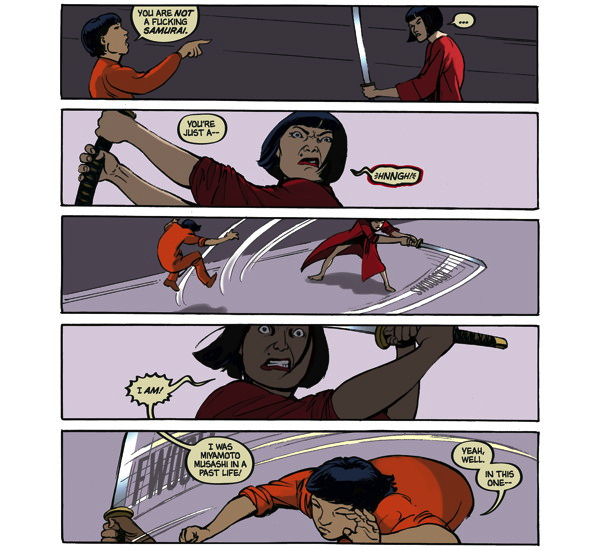 And we’ve still got Gary Erskine and Fredicia Manfredi to look forward to!

But what makes this series work, even moreso than the films it emulates, is what is not there. The costumes don’t look like they’re made of tires and cardboard, the actors aren’t falling asleep while they read the lines or chewing the scenery, the camera doesn’t wobble and the color doesn’t shift. This series is grindhouse as if it had been done with an unlimited budget, starred every actor you could ever ask for and was directed by Orson Welles.  It’s a tough concept to take in, but once you pick up the books you’ll know exactly what I mean.

Grindhouse: Doors Open at Midnight is put out by Dark Horse Comics and has four issues out now and in print. There are four issues to follow and the first trade is scheduled for March.

Who would like it: Readers of noir, zombie or psychedelic comics who wish their books were more fun and fans of Robert Rodriguez, the Hammer family of films and all that cheesy goodness.

For Menachem’s previous You Should Be Reading This columns: Here.