It’s almost Wednesday! Hooray! Here’s what looks especially good this week, according to our experts …

“Baby’s In Black” trade paperback, First Second. Just in time for the Beatles’ 50th anniversary in America, “Baby’s In Black” is released in softcover. Arne Bellstorf’s gorgeous ’60s-style artwork perfectly complements his retelling of the story of the Fifth Beatle (or at least one of them), Stuart Sutcliffe, in the tumultuous last years of his life. Incredibly well researched, it’s not only for the hardcore Beatles fan, but anyone in the market for a great love story. Give it to your Beatles-loving sweetie for Valentine’s Day. 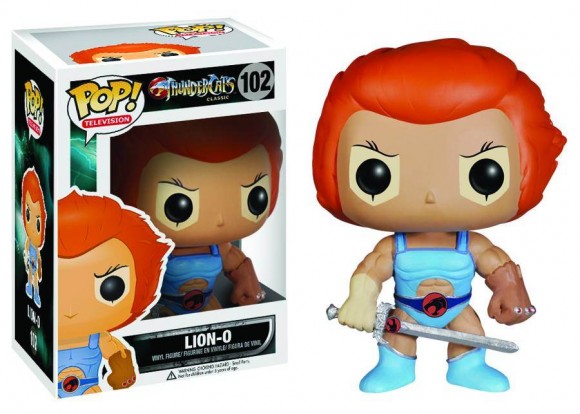 My Little Pony Brony Drink, Boston America Corp. I shit you not. This is a thing. F#####g Brony juice.  It’s not puréed Bronies, but a “cherry splash” flavored energy drink for those weekend-long MLP marathons. Friendship is magic, and so is what’s in this can. Drink up! 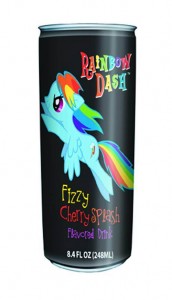 Ms. Marvel #1, Marvel. I have been anxious for this book since they announced it. Our customers are really anxious for this one, too. I just love G. Willow Wilson. She’s awesome. Plus, the whole idea of a superhero that challenges people’s idea of what a superhero is, well, that’s simply fantastic. I mean, she’s a female. And 16. And there was something else new about this Ms. Marvel …

“Baby’s in Black,” trade paperback, First Second. I ordered this book from across the pond a while ago. I’m a huge Beatles fan. This is all about the story of The Beatles and their relationship with Stu Sutcliffe and Astrid Kirchherr. It may skip some of the darker parts of the story, but the story is told well and I love the art. It’s smoky and playful and great. If you are a Beatles fan, you’ll love it. If you aren’t a Beatles fan, you should start listening to the Beatles and read this book. You’ll love it. 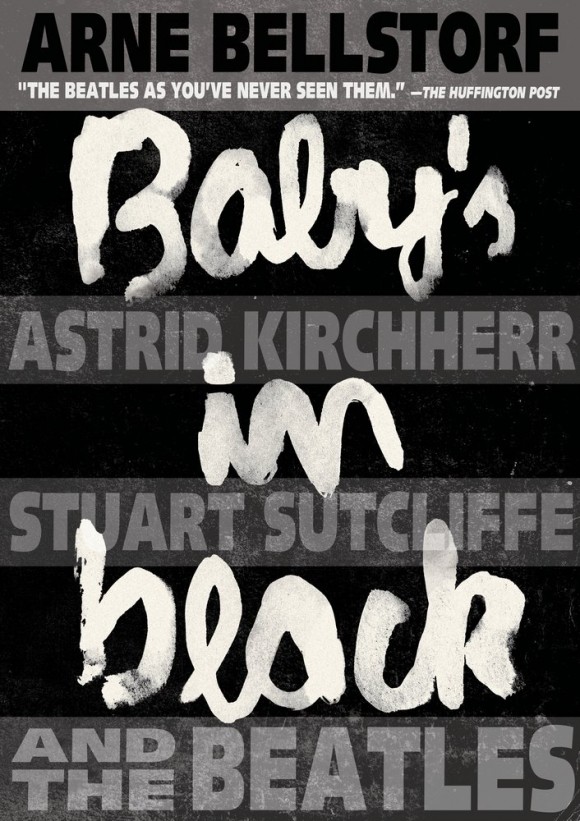 Lazarus #6, Image. I am loving this series. I usually love Rucka’s work, but I mean I am really loving this series. It also doesn’t hurt that the Michael Lark art is so spectacular. I am so anxious to see what happens to Forever and if her “sister” can keep fooling her. It’s one of those page turners and when you are finished, there is a very long month ahead.

All-New Invaders #2, Marvel. The Original Human Torch teams up with Captain America and Winter Soldier to rescue Namor, the Sub-Mariner from the Kree Homeworld. Trouble’s a-brewin’ in the Marvel Universe, that’s for sure …

Grindhouse: Doors Open at Midnight #5, Dark Horse. The perfect time to jump into this wonderful series, as every two issues is a totally new story (with a different artist) in the Grindhouse style! This time around writer Alex De Campi and artist Federica Manfredi bring you a bride’s tale of revenge. I could go on and on about why you should read this book … Oh look, I did!

Judge Dredd: Mega-City Two #2, IDW. If you missed all the well deserved Hype about #1 …  you probably weren’t on the internet much two weeks ago. Doug Wolk has given us a very straight-forward and true-to-character Dredd, stuck in a land that he just can’t abide while Ulises Farinas has done some of the most intense hyper-kinetic design work and art since Brendan McCarthy was drawing the Judge. Seriously, a must-read.

Ms. Marvel #1, Marvel. WHAT?! Me, picking an All-New Marvel Now book?! Fear not, True Believers, I haven’t bought into the hype or feel the need to promote multiculturalism for multiculturalism’s sake. No, this book is by G. Willow Wilson, a creator I love (go read Egypt, Air and Alif the Unseen! [the last one don’t got no pitchers in it, but it’s good, I promise]) who knows how to write believable characters in fantastic worlds. The art duties are being handled by Adrian Alphona, who is one of the reasons Brian K. Vaughan’s Runaways just BREATHES with life from the first page on. Add to the mix that it’s a teen hero with a lot more of an interesting background than most cookie-cutter kiddie heroes and you’ve got a slam-bang of a super-tights book. 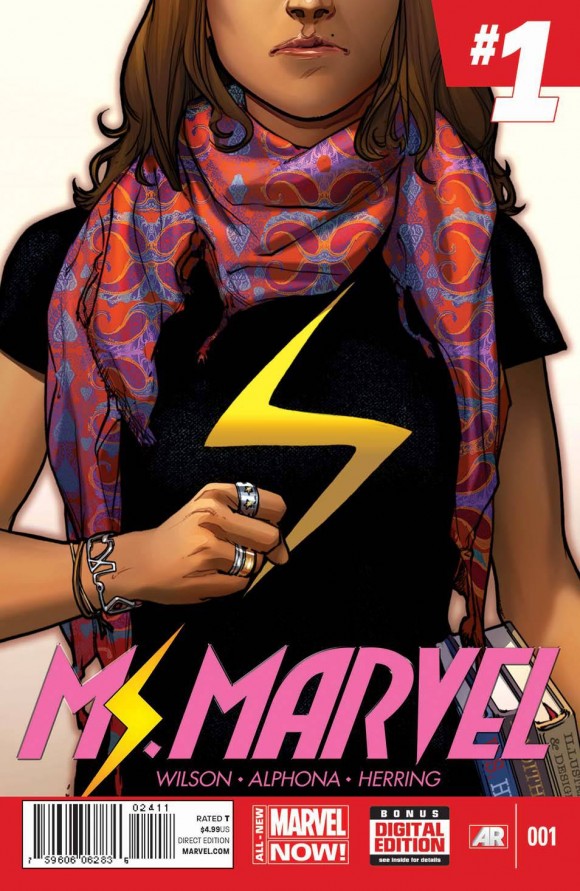 Turok: Dinosaur Hunter #1, Dynamite. Greg Pak is on fire lately. Action Comics and Batman/Superman have been two of my favorite books. I admit I’m not to familiar with Turok.  I haven’t read any incarnation of it over the years. This is me putting my trust in Greg Pak to give me a good book, but with his track record lately, I think I’ll be OK.

Action Comics #28, DC. Speaking of Greg Pak, he is writing one of my favorite books right now. It’s Superman fighting giant monsters that live in the middle of the Earth. What more can you ask for in a comic? 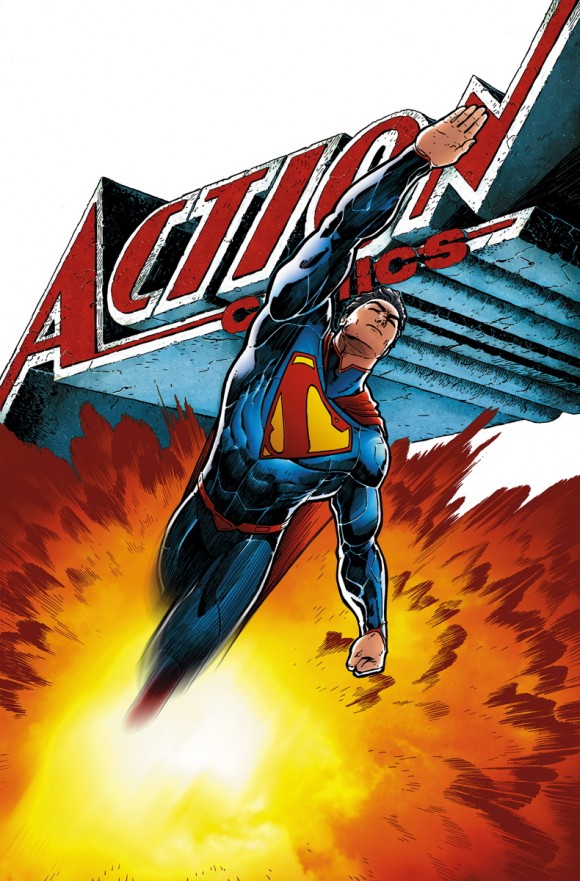 Ms Marvel #1, Marvel. Here’s why we don’t have hover boards, flying cars and colonies on the moon: We haven’t made enough social progress to warrant our technological progress. With that said, the fact that the only news I’ve heard about this book is that this character is a Muslim super-hero is very disappointing to me. How about we talk about the fact that this is the newest teen super-hero Marvel has debuted? The fact that Marvel has an awesome record of launching successful teen characters like Darkhawk, Speedball, Nova, and a short-lived character called Spider-Man? Can we also mention the return of amazing artist Adrian Alphona, who penciled the most successful teen book in recent years, Runaways?  So if we can talk about that and the eight-page story in All-New Marvel Now #1 that previewed this book, why do we need to manufacture a controversy to get people excited for this book?

What are you looking forward to most? Leave a comment below!