Why Sunny Superheroes Still Have Meaning 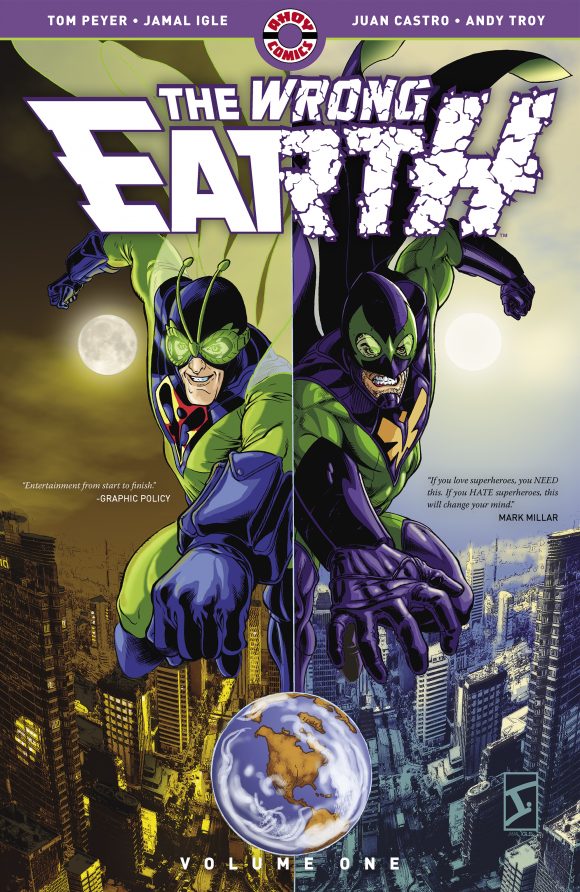 I’ve made no secret that one of the most entertaining and vital comics to come out in the last year is AHOY Comics’ The Wrong Earth, a series that ponders what would happen if a grim-and-gritty hero in one universe switched places with his campy counterpart in another.

It’s the kind of story that appeals to modern readers, as well as old-school fans and devotees of a certain 1960s TV show.

That’s because the comic by Tom Peyer, Jamal Igle, Juan Castro and Andy Troy is more than the sum of its parts: It’s a fun satire, sure, but it’s a series that speaks volumes about the nature of heroism, the comics industry and readers themselves.

Anyway, The Wrong Earth’s initial trade paperback is out in comics shops Wednesday (and from booksellers May 14) — and we’ve got a nifty EXCLUSIVE for you: writer Tom Scocca’s introduction to the collected edition, which you’ll find below, accompanied by several pages from the series’ first issue.

More than just an ode to the series, Tom’s piece is essential reading for anyone who’s fallen in love with comics in the last 80 years or so — and who may be frustrated with the darker turn things have taken since the ’80s. That said, you’ll see that those shinier, happier days weren’t quite as advertised either. 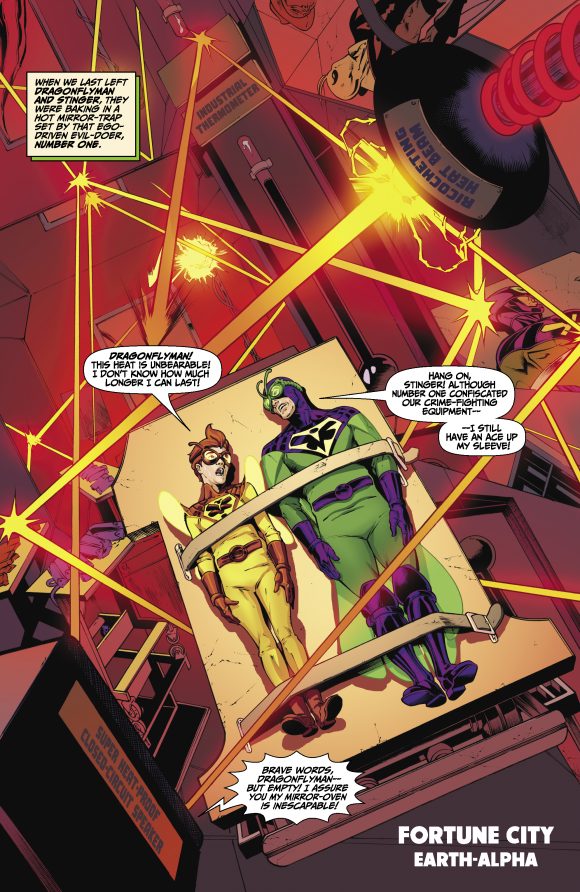 How did we get onto this timeline? People have been asking this question, out loud and about real life, for at least the past three years. It’s more than a complaint about day-to-day news events having become especially absurd or bizarre; it’s a complaint that the underlying rules have been broken—that our very sense of what was reasonable or possible no longer applies. Something about the entire nature of things has been dislocated.

We are discovering, in other words, what it feels like to be a superhero. One day you’re cheerfully cracking wise as you fight for justice; the next, you’re a bitter vigilante in a world where sadism competes with sadism. Someone got bored or ambitious, and now your powers are on the fritz and your sidekick is mortally wounded and it won’t stop raining.

Life itself is a continuity problem. The superheroes just get dragged into it. (“What… is… happening to me?!” they cry, as the cosmic rays or god-powers or mutations kick in.) One thing happens after another, and we try to retcon our reactions into a working narrative, to make it seem as if we have any control. 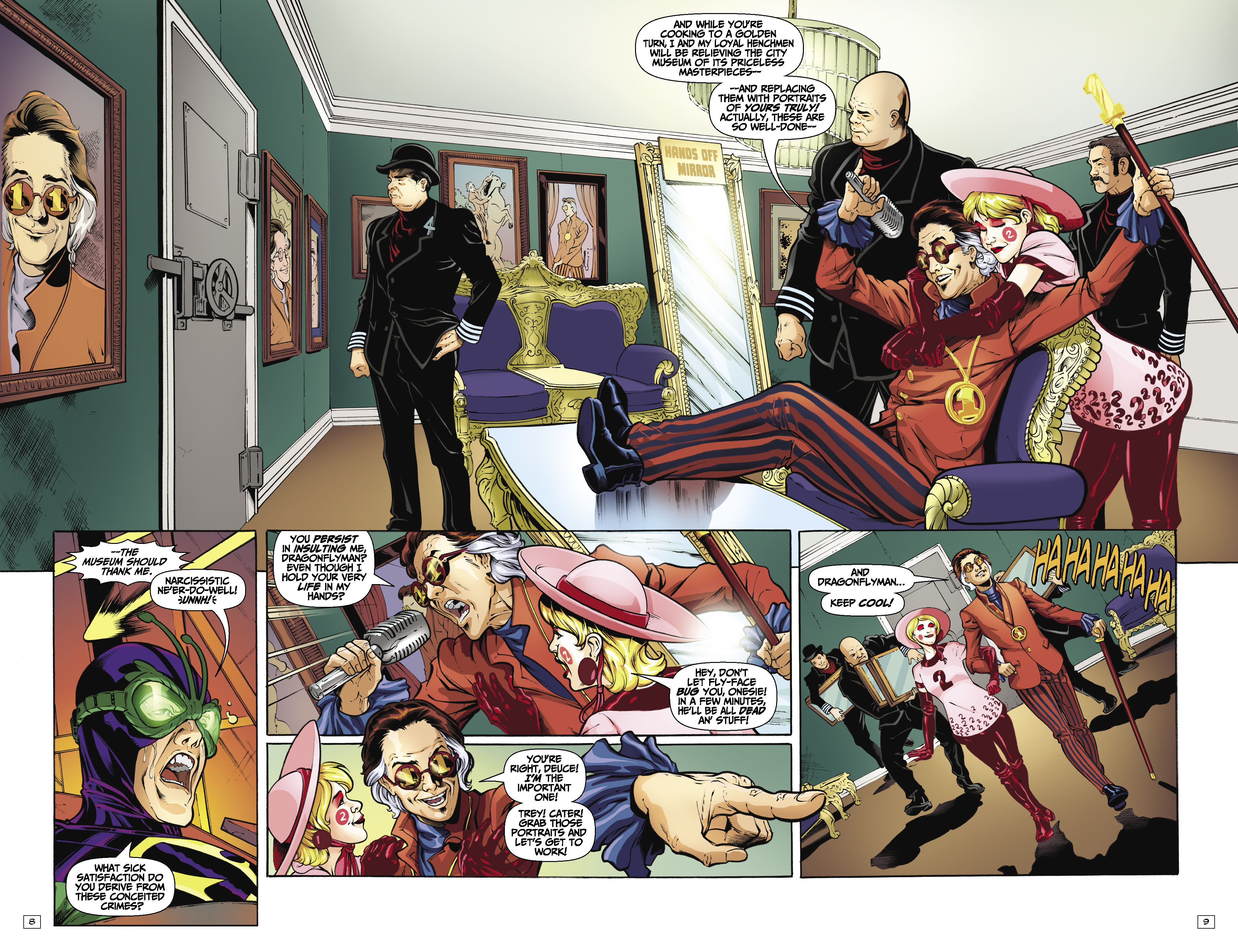 Every comic book is an argument about the nature of the world, though not necessarily the argument it thinks it’s making. By agreement, we are too savvy to believe anymore in the cornball, sunny heroes like the old Superman or Wonder Woman, conjured in the innocent years when (consults history book) global economic collapse was turning into industrialized mass slaughter. Now the comics demand you believe in grittiness, the unremitting sourness of an adolescent who hopes that if they can somehow hurt the world, the world can’t hurt them back.

The real comic-book fantasy of our age isn’t that skin can stop bullets or that a pocket-sized gadget can solve any lethal puzzle. It’s that if you strike the right pose—if you’re cruel enough to your characters or your readers—attitude can be passed off as meaning. Trap everyone in your narrow, misanthropic mood, and they’ll accept any ragged or misconceived vision as a coherent reality, maybe even a serious one. So, what if no one’s having any fun? Isn’t having fun little-kid stuff?

Enter—and exit, and enter—Dragonflyman and the Dragonfly. The brave and cheerful Dragonflyman is the innocent reader, moving from panel to panel. Number One, his archenemy, is fleeing, and Dragonflyman is chasing him, because that’s what heroes do—right through the frame of an uncanny mirror, without hesitating, and into the world beyond. The ruthless Dragonfly, cynical and embittered, crosses right back the other way, at the same time, for the same reason. It’s the job. He’s a superhero. 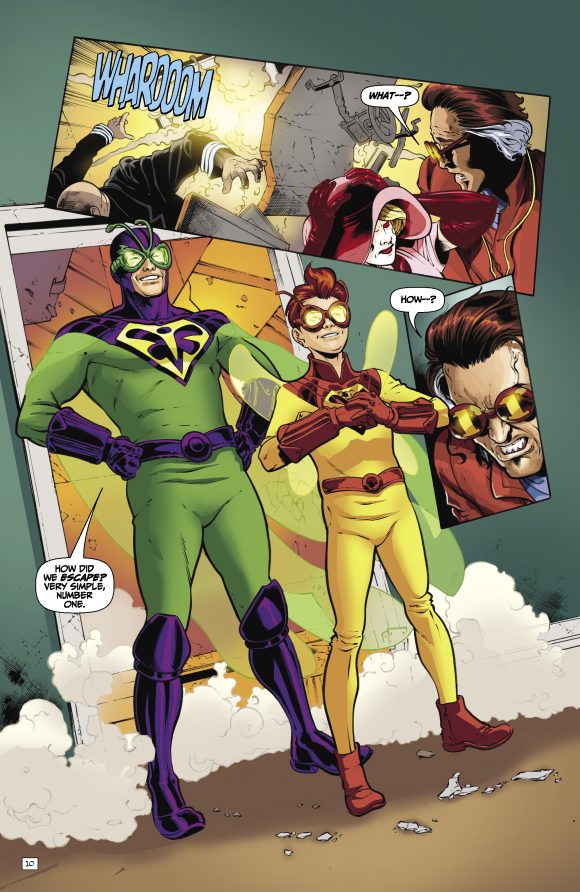 And then, just like that, nobody quite knows what a superhero is. Least of all the two superheroes. It’s not the world-switching premise that confounds them—they both grasp that, as a plot point, almost effortlessly. It’s the minute-by-minute problem of how to live without the old clichés to guide them, and how to survive being simultaneously misunderstood and understood too well.

The result is a syncopated wobble in the moral balance. It is unavoidable and entertaining that the Dragonfly would smash his way, at first, through the gentle and trusting civilization of Earth-Alpha. But meanwhile, in the brutish darkness of Earth-Omega, Dragonflyman’s cornball gimmicks serve him as superweapons, and his own moralistic do-gooder spirit takes on its own edge of ruthless fanaticism. The cartoonish rogues’ gallery of the one world shows more fighting spirit, at times, than the psychopathic killers of the other. 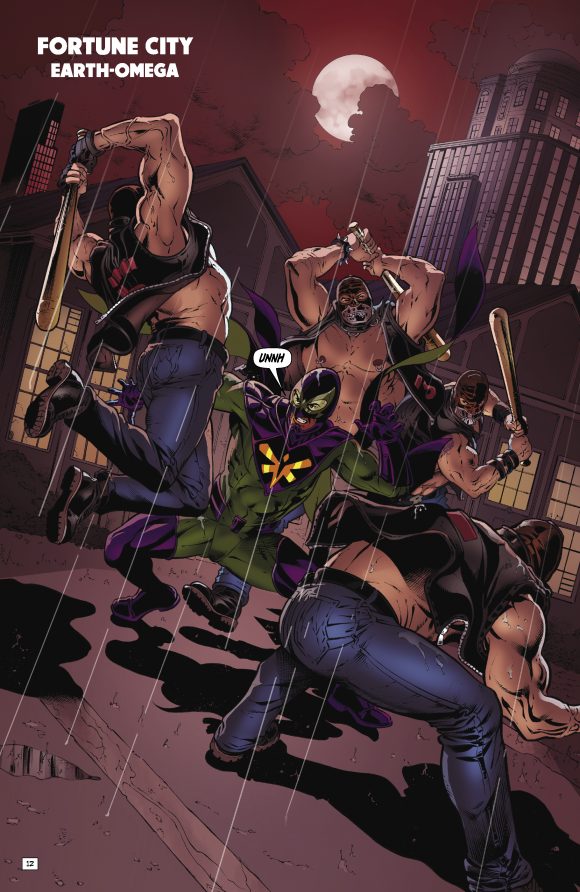 In both worlds, and not only for the heroes, the impossible question comes into view: Why does it have to be this way? What if you could make it different? Now the Dragonfly has to scheme and talk his way through obstacles; Dragonflyman has to fight, reciting pow-sock sound effects to himself out loud for reassurance.

It’s hilarious, but it’s not only hilarious. From the very first panel, we meet Stinger, the boy sidekick. Boy sidekick is a thankless job, under either set of normal comics rules: taken for granted in a nice world, or used as fodder for grimness in the grim world—a practice that reached its nadir more than 30 years ago, when Batman readers were invited to kill Robin via a 1-900-number phone poll.

Thus, crossing over to Earth-Alpha, the Dragonfly is stunned to see Stinger alive; Dragonflyman, landing in Earth-Omega, blithely assumes a version of his young companion must be waiting there for him. The dramatic irony lands with the weight of real loss. In place of a plot device, the heroes find themselves confronting a story.

Tom Scocca is the editor of hmmdaily.com. The Wrong Earth trade paperback is due in comics shops Wednesday. It can also be ordered through Amazon.

— How Jamal Igle Created the Covers for THE WRONG EARTH. Click here.