EXCLUSIVE: A colorful look at a new world … or worlds… 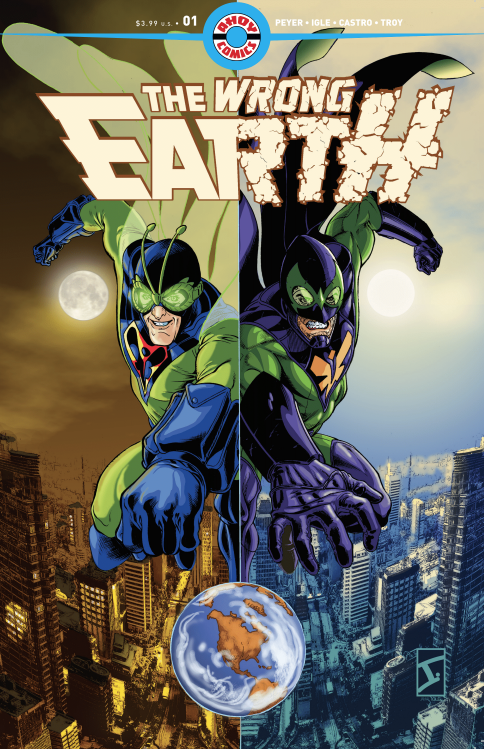 AHOY Comics is kicking off this fall with a slate of whiz-bang titles that celebrate the core of what we love about comic books. (Click here to check out what they’re up to.)

One of the titles that leapt out at me was The Wrong Earth, by Tom Peyer and Jamal Igle, which explores the cultural disconnect between the worlds of a sunny, Silver Agey Caped Crusader and a very grim-and-gritty Dark Knight.

“AHOY Comics launches with a biting superhero satire! On one world, Dragonflyman and his sidekick Stinger enjoy a life of adventure. On another Earth, the Dragonfly hunts criminal parasites like a lethal exterminator. But what happens when these two heroes change places?”

Igle shared some of his designs for the series, which debuts 9/12, along with his commentary. — Dan

Dragonfly. Or as I think of him, “the Goddamn Dragonfly,” was the first character I designed for the series. His costume was actually inspired by my vacation to Tokyo the summer before. While it’s evocative of classic vigilante heroes we know and love, there are also elements inspired by the animes Science Ninja Team Gatchaman and Moldiver. 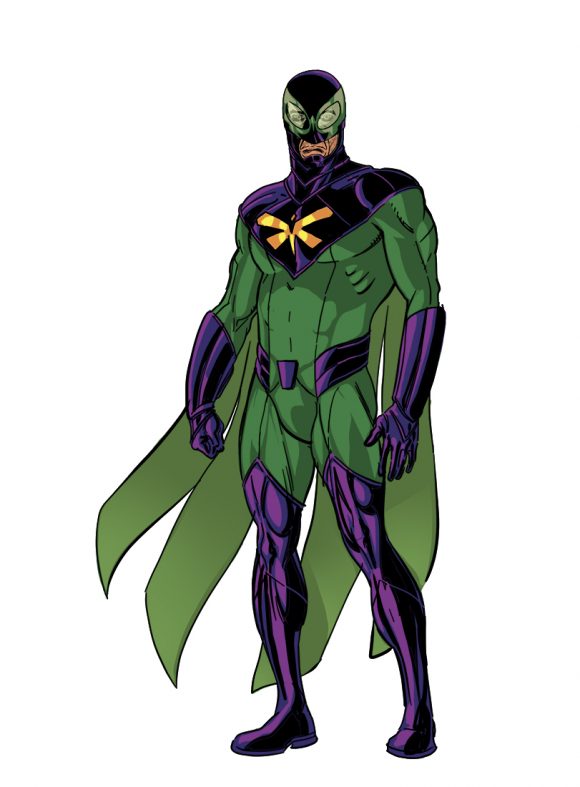 Dragonflyman. The Earth Alpha doppelganger of Dragonfly, he’s more inspired by heroes like the Golden Age heroes Spy Smasher and the Green Hornet. He’s actually directly reverse-engineered from his darker counterpart, both in tone and musculature. I approach him as slighlty broader and less “cut,” evoking the bodybuilders of the 1950s like Charles Atlas and Clint Walker. His forearm gauntlets house an array of equipment and material for him to use. I also gave him goggles with distracting, glowing lenses to keep the bad guys from figuring out his secret identity. 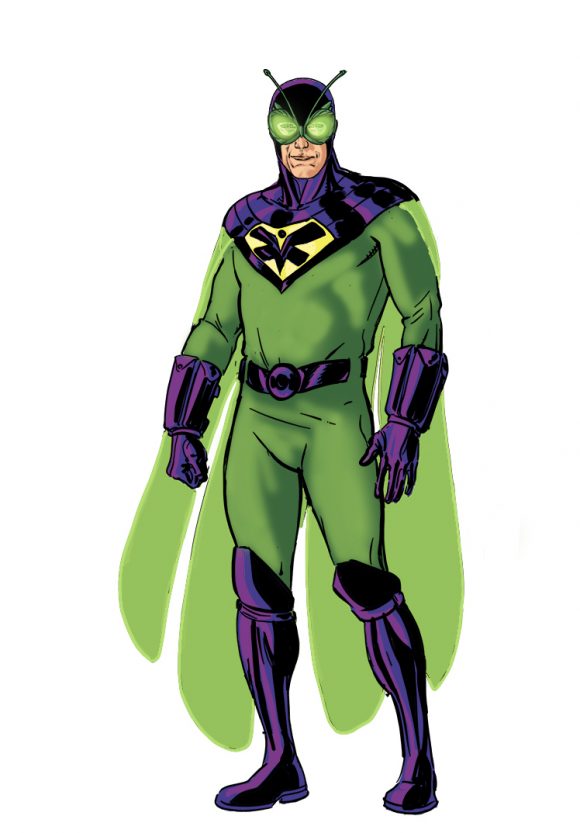 Stinger. One part Beaver Cleaver, one part Eagle Scout, all hero. The Winged Wunderkind was next on the design list. Like the classic sidekicks of old, his costume needed to be individual but similar to his mentor’s. Complementary colors, both bright and sunny, and his ethereal wings give Stinger the air of innocence required. 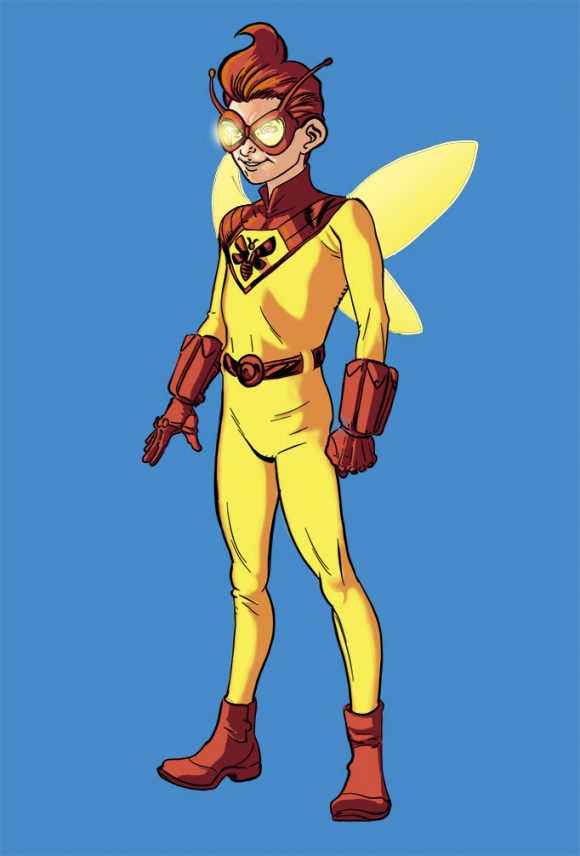 Alpha #1 and Omega #1. I really wanted to push the differences between our villain(s) even more than with Dragonfly. Alpha #1 is very much inspired by some of the lesser known Batman ’66 villains like Egghead and Louie the Lilac. He’s also inspired by Charles Nelson Reilly’s Horatio HooDoo from Lidsville. Nehru jacket, giant gold medallion, frilled sleeves and striped, skin-tight pants evoke mod fashion sensibilities of the 1960s counterculture. His goons are directly inspired by the Patrick McGoohan series The Prisoner. 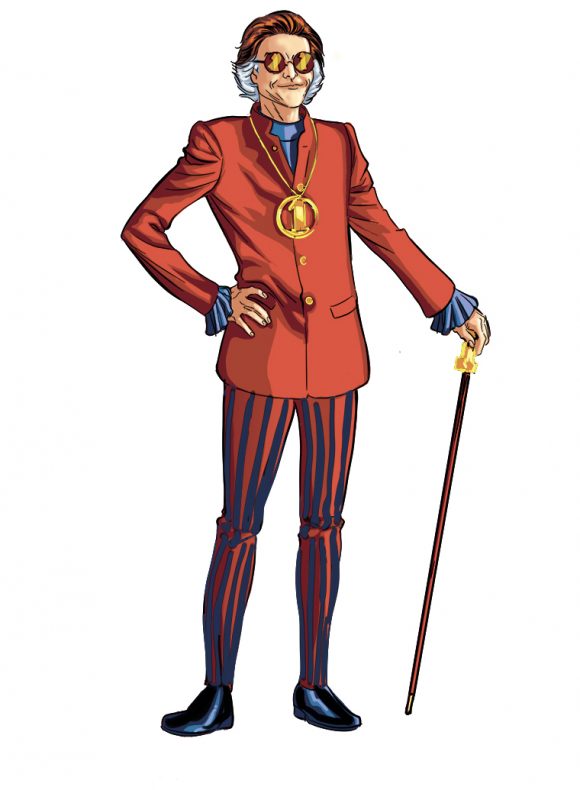 With Omega #1, I went to a much darker place. He’s a Tim Roth villain, dressed like a reject from Sam Mendes’ revival production of Cabaret. Dingy, dirty, covered in rags and scars. More muscular than his counterpart and far more sinister in his vainglorious nature. His henchman reflect that as well. Bondage masks and leather vests, more muscular than anything you’d see on Earth Alpha, Numbers 2 through 6 are violent counterparts to their other-dimensional brethren. 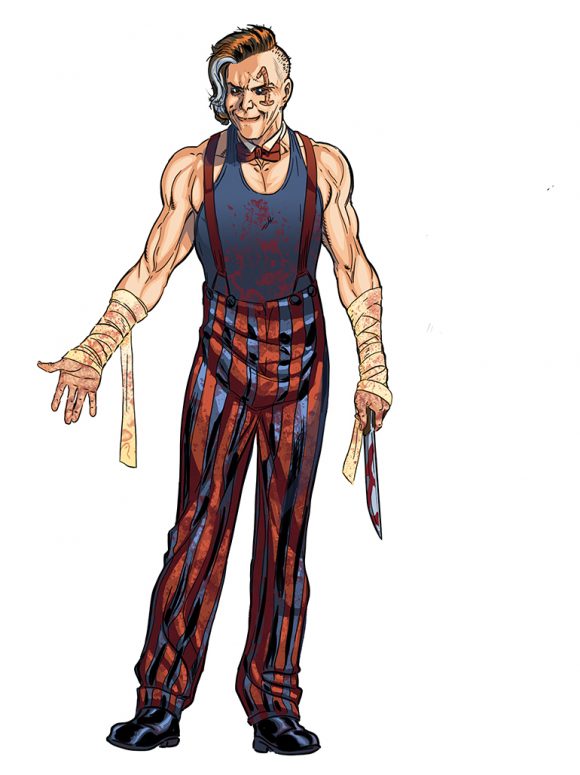 Deuce. Again, digging deep into my research for the book, I wanted to reflect the mod sensibilities of Alpha #1. Deuce has a little Goldie Hawn/Judy Carne/Laugh-In style to her look. I was surprised to find that patent leather was a thing even then, although not the skintight version we see now. Why does she have so many “2’s” on her outfit? So you know exactly who she is. Deuce has a special place in my heart, as it’s one of my favorite designs for a character so far. 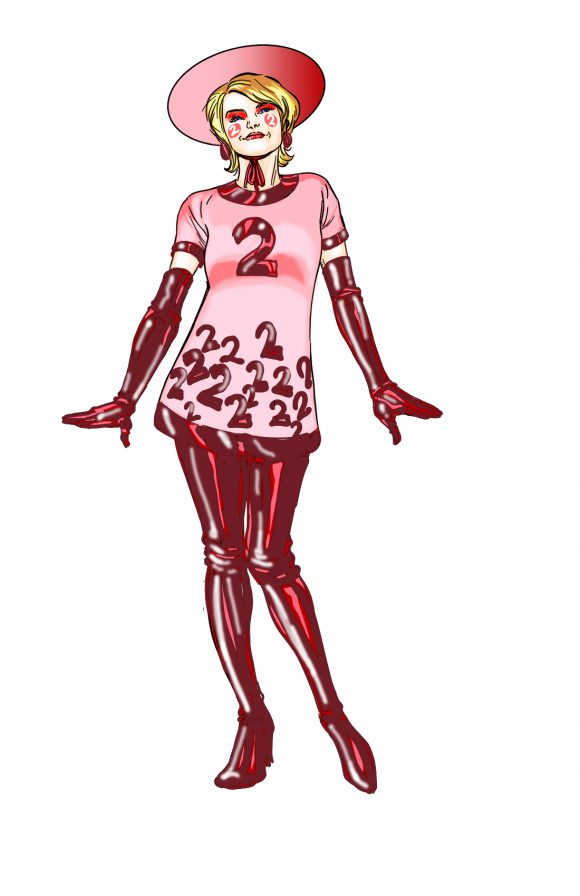 As we get deeper into the series, you’ll get to see the expanded worlds and their technology, as well as the mix of aesthetics that I wanted to use in order to bring The Wrong Earth to life.