UPDATED 1/19/23: REEL RETRO CINEMA’s Rob Kelly gives you an UP-CLOSE LOOK at the Star-Spangled Avenger’s first standalone movie, which 44 years ago followed his ‘60s cartoon and ‘40s serial. This first ran in 2021 but it holds up just as well today. Dig it. — Dan

Over the years in REEL RETRO CINEMA, we’ve discussed the various Marvel superheroes that made their way onto the small screen: Spider-Man, Dr. Strange, and The Incredible Hulk. But there’s one name missing from that fantastic four: the Sentinel of Liberty, Captain America. 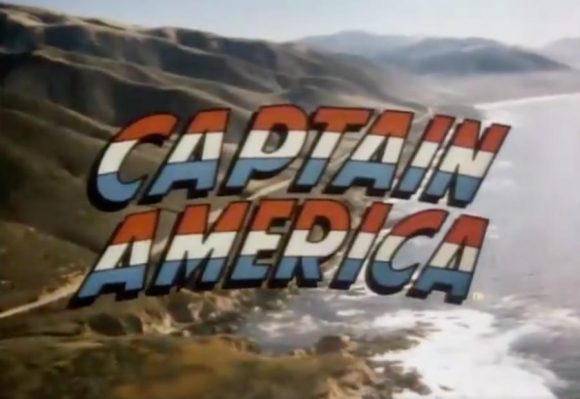 Considering how relatively budget-friendly Cap as a character is when it comes to live action, it seems strange that he would have made it to TV after his fellow members of the Marvel Universe. Perhaps TV producers wanted to get as far away from the Watergate Era as possible before trying such an unapologetically patriotic character. Or, with Star Wars exploding onto the pop culture scene with its upbeat, optimistic flavor – not to mention the continued popularity of Evel Knievel — they sensed the tide was turning, and people would really go for a super-powered guy dressed in red, white, and blue punching out baddies.

Directed by TV veteran Rod Holcomb (ER, The Six Million Dollar Man), 1979’s Captain America takes some of the basic elements of the comic book legend but updates them to modern day. Ex-Marine Steve Rogers, played by massive hunk of beef Reb Brown (Yor, Hunter From The Future, The Sword and the Sorcerer) is not a soldier in World War II era-America; rather, he’s a van-driving, soft-spoken, rather sensitive soul that belies his massive frame. 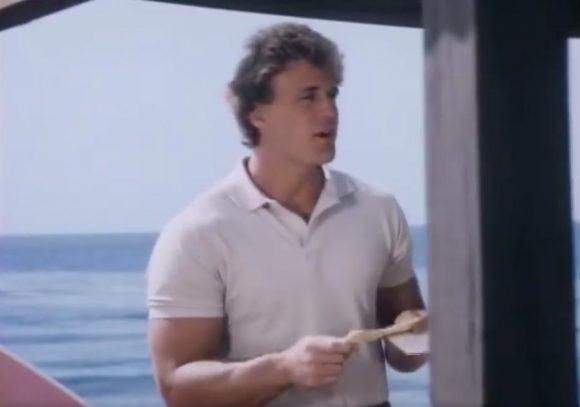 Steve keeps getting letters from a Dr. Simon Mills (Len Birman, who voiced Hercules in the 1960s Thor cartoon), but ignores them. Finally, he goes to see Mills, who explains that Steve’s father developed an experimental formula called FLAG (Full Latent Ability Gain — “S.H.I.E.L.D” it ain’t), which gives people accelerated, almost super-human, abilities. Steve’s Dad had a reputation for always fighting for the Little Guy, so much so that he was known as “Captain America.” Now Steve understands why, when his Dad died, he got a letter of condolence from the President himself!

After a friend of Steve’s is murdered by some crooks who want to get their hands on Does It Matter, Steve is followed by those very crooks, who think he knows more than he does (had they met this version of Steve Rogers before, I think him knowing too much would not be a major concern). Steve is almost killed by the bad guys (led by an “industrialist” named Lou Brackett, played by the legendarily gravel-voiced and lantern-jawed Steve Forrest—The Longest Day, Spies Like Us), so Mills and his assistant, Dr. Wendy Day (Heather Menzies; Logan’s Run, The Sound of Music) are forced to give Rogers the FLAG formula to save his life. I say forced, but to this point Mills has been so gung-ho about FLAG you get the sense he was really waiting for a moment just like this.

In one of the movie’s best scenes, Steve and Dr. Mills talk on the beach about Steve’s newfound abilities, and he is (rightly) worried about all this new power he has, and how he has to keep it under tight control, lest some innocent person gets hurt. It’s the proverbial “With great power, comes great responsibility” scene, probably the biggest Marvel Comics touch of the whole effort. 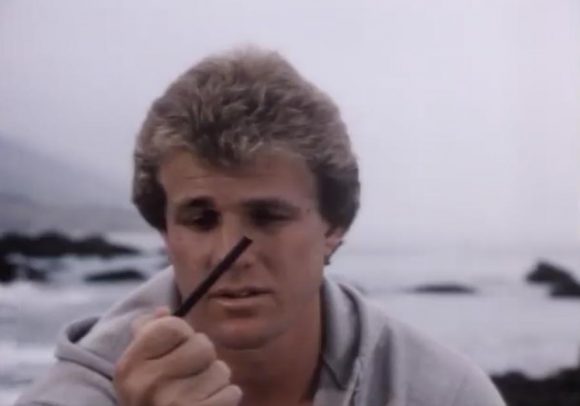 But all that 1970s EST/Alan Alda/Sensitive Guy self-reflection stuff is quickly shunted aside when Mills give Steve something we all came to see — namely, a red, white, and blue rocket-powered super-awesome stunt cycle! In an extended sequence, Steve goes on a joyride on his new toy, and the Captain America theme music swells. The bad guys try and take Steve out again, but he escapes.

Brackett then tries to manipulate the daughter of the man they killed, so he can get a hold of No, It Doesn’t Matter. Brackett then moves forward with his plan, which is to build a neutron bomb so he can blow up everyone in Phoenix, Arizona, where a massive gold mine resides. Brackett then kidnaps Dr. Day — whom Steve has taken a liking to — and that forces Steve to suit up as the new Captain America to rescue her and stop the bomb from going off.

This particular Captain America seems to really enjoy beating the crap out of bad guys (can’t blame him). He throws them around, hits them with his boss not-at-all-plastic shield, even covering them in oil with a big smile on his face. 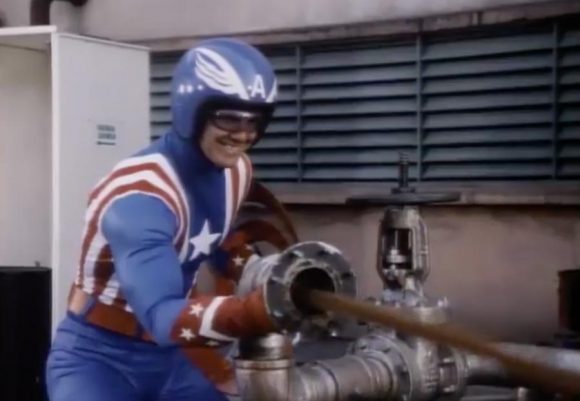 The film ends with another chase on the Cap-Cycle, and Brackett’s plan is foiled, even after he hooks the bomb up to his own chest (who is he, Tony Stark?). After Dr. Day is rescued, Steve then decides to commit to being Captain America, keeping the country safe from any and all who would threaten it. The End.

I remember watching Captain America when it originally aired (January 19, 1979) and coming away mildly entertained. I liked the stunt cycle, of course, and the (helmet aside) fairly faithful representation of the costume. But with the benefit of hindsight and many good and bad Captain America movies later, I can see this movie for what it was — an earnest, if feeble, attempt at making superheroes “palatable” for a modern TV audience. 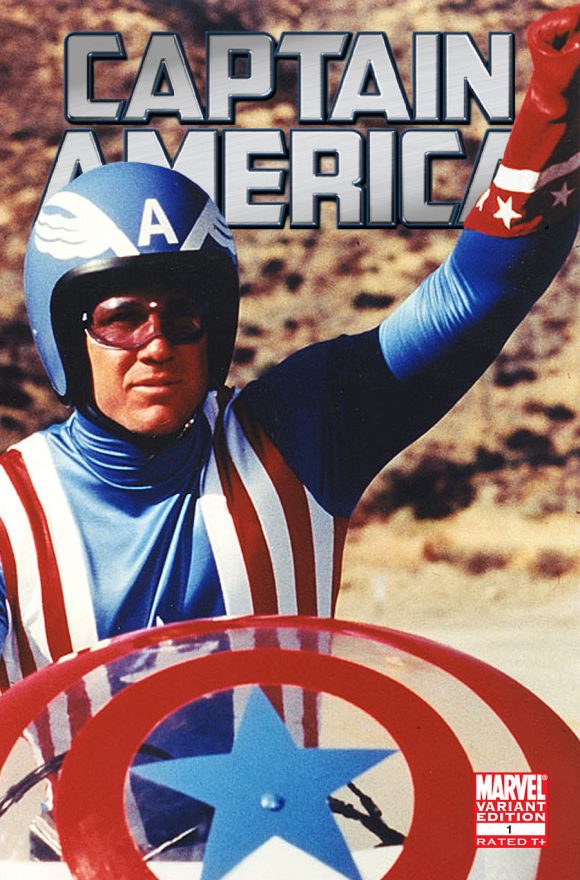 The main problem is the pacing. For a movie that is barely longer than 90 minutes, Captain America is glacially slow. We spend way too much time watching Steve Rogers drive around in his Chevy Van, and that’s not all right with me. Reb Brown’s Steve is such a quiet, mellow dude, that he practically has to be dragged into the action. He’d rather just, you know, sit on the beach and draw, you dig?

And when that sensitivity is actually a plus — the aforementioned scene on the beach — it’s put into the wrong spot in the movie. After Steve gets the formula, we want to see him become Captain America and start doing cool stuff, not whine to Dr. Mills. As I said, I like that scene, but it should have come at the end of the movie, not squat in the middle, interrupting whatever narrative momentum they had going. 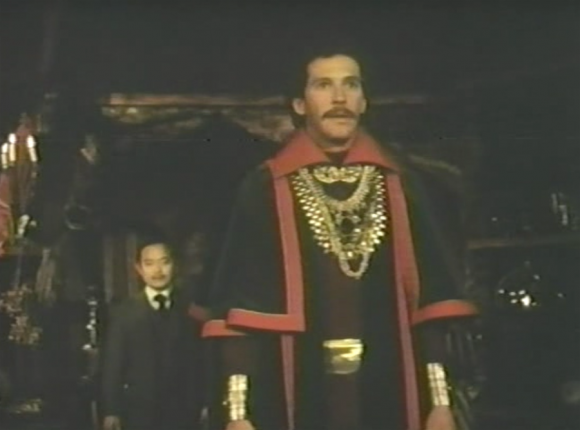 Steve Forrest’s Lou Brackett is also a little too dull as a super-villain. I realize that, outside of the 1978 Dr. Strange movie, none of these Marvel TV adaptations had colorful villains, mostly because the producers just didn’t think audiences could handle these things being too comic book-y. But a guy who wants to steal a bunch of gold — Goldfinger notwithstanding — just isn’t that interesting, nor does it really tie into the theme of America needing a champion from those who would attempt to bring it down. Luckily, Universal would realize their mistake when it came to another Captain America TV movie and significantly upgrade their villain (but that’s a REEL RETRO CINEMA column for another day).

Considering how heavily Captain America leans into the whole Evel Knievel thing, it’s amazing to me that more (any?) merch wasn’t produced to tie in with this movie. There have always been Captain America toys, mostly from Mego, but, I dunno, it seems like a whole line of Cap cars and stunt toys could have been successfully marketed off the back of this movie. Then again, Mego never even did a Dr. Strange doll, and he got his own movie, so maybe these things weren’t the potential cash cows I imagine. 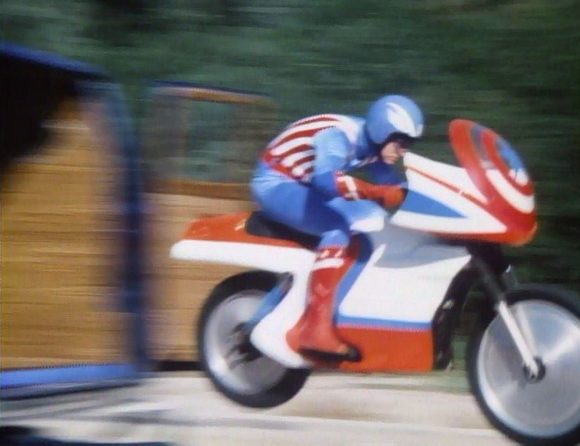 Is Captain America “good”? Not really. There’s not enough Cap action and most of the characters are too forgettable. But like a lot of these Marvel TV adaptations, its heart is in the right place and it’s mostly on par with the other movies of the time. Instead of feature-length movies, maybe Cap would have benefited from a more tightly paced one-hour weekly series.

Still, I would have killed for this Captain America to take me on a ride on his stunt cycle.