JOKER WEEK: These are lethally fun…

Hey, if there’s a villain who’s seen his fair share of action figures, it’s the Joker — the greatest comics baddie of them all. 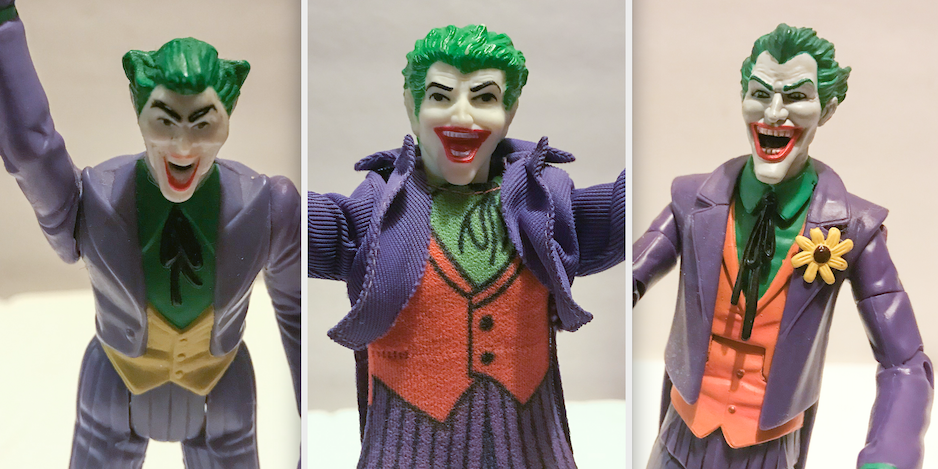 The Joker is as open to interpretation as his arch-foe, Batman. From homicidal extortionist, to merry prankster; from vain megalomaniac to crazed serial killer, he’s filled whatever role comics, television, film, and even society have needed him to. The original evil clown, when that form of entertainer was intended to bring only joy, not fear.

His interpretation in the toys, and now collectors’ aisles, haven’t been any different. From cheap playthings to expensive pieces, the Joker has probably been cast in plastic more than any other comic villain.

Here in my humble opinion, are the best of one of fiction’s worst: 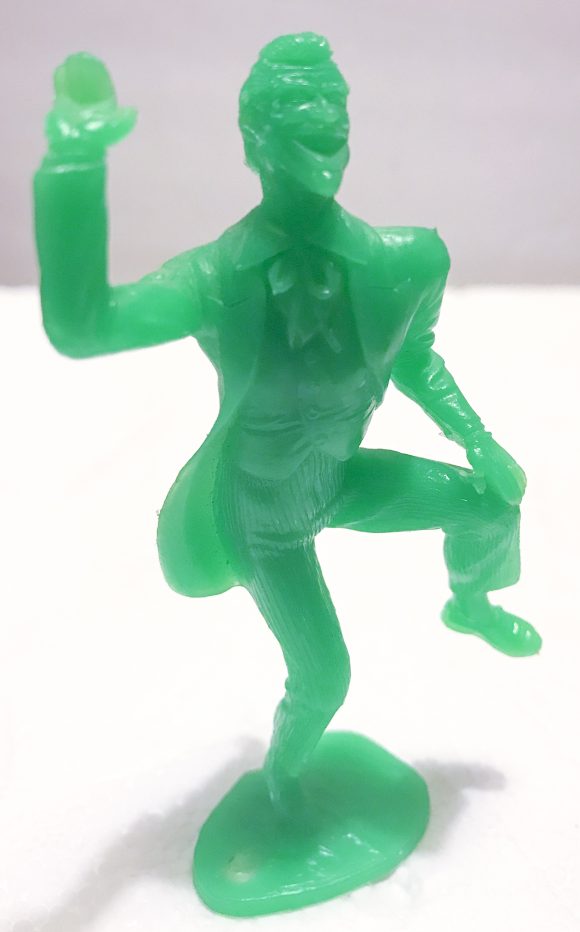 OK, this isn’t QUITE an action figure, but it’s the first figural interpretation of the Joker, so it deserves some respect. Ideal’s Justice League/Batman line of figurines and playsets debuted at the height of Batmania in 1966, just two years after G.I. Joe coined the term “action figure,” and in the same year Ideal gave us Captain Action. While the good Captain and young sidekick Action Boy had costumes available to transform them into the first Batman and Robin action figures, their foe Dr. Evil did not have a licensed villain wardrobe, so no Joker. Instead we get this finely detailed figurine, not unlike the toy soldiers that emerged years before, depicting the Harlequin of Hate in mid-guffaw, slapping his uplifted left knee. Like the other villains in this line, the Joker was never released with any paint deco, just cast in one solid color. The amount of character and movement captured in that solid lump of one-colored plastic is nothing short of extraordinary. 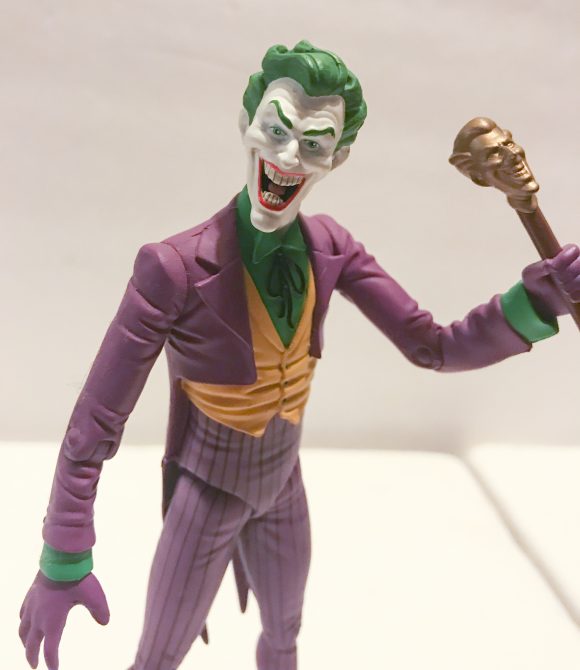 Paired in a two-pack with an era-appropriate Batgirl figure, this Joker is pure classic. With a wonderful head sculpt by Tim Bruckner, who shows up a lot on this list, this Joker recalls the Silver and early Bronze Age comics without pinpointing one particular artist. His suit looks a bit snug, but it often did in the Silver Age, especially as drawn by Carmine Infantino. He does come with a Joker’s head cane, which is an accessory the Joker is often given, even though his time carrying one in the comics is a bit limited. Pairing him with a character he will later cripple is a bit strange for merchandise trying to call back to a kindler, simpler time, but since both figures are well-executed, the sting isn’t as bad as you’d expect. 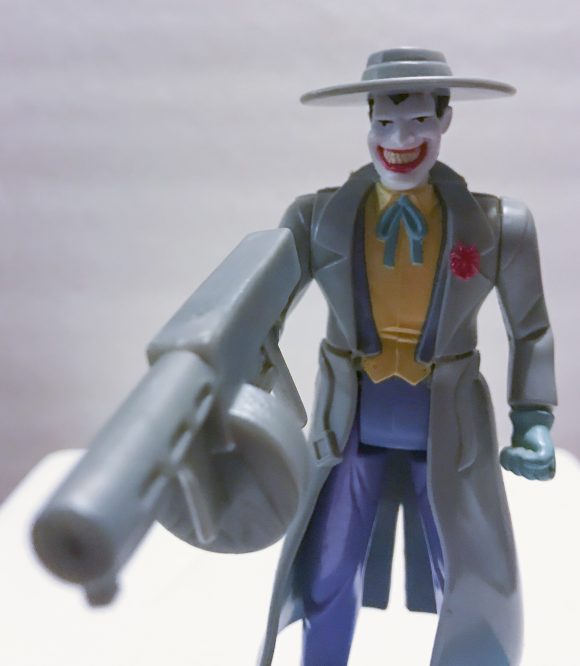 This one barely edged out its predecessor from the original Batman: The Animated Series line. And it’s only due to that stylish gray trench coat and hat, and the rather practical weapons he comes with! The first BTAS Joker came with a water-spraying bellows mechanism and a gas mask, but this Joker is going all gangsta with his outfit AND a tommy gun, in addition to a Joker-themed bomb with dynamite! We see this look quite often in the series (Joker’s Favor comes to mind), and it was a wonderful treat to find this figure among all the DayGlo variations of Batman and Robin the line was beginning to decline into. 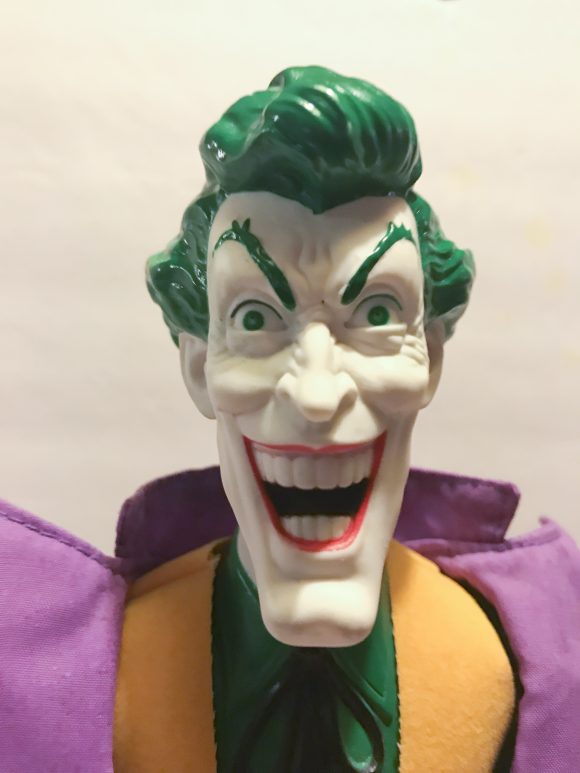 In the glut of Batman merchandise hitting the shelves in and around 1989, the Hamilton Presents collector figures stand out. Mostly due to their classic comic styling and excellent head sculpts. Batman looks like a Garcia-Lopez drawing in 3D, Robin has a bit of Burt Ward in him, and the Joker is more demented looking than any figural portrayal before, and few since! The man looks EVIL and completely unhinged! These figures were the first time Tim Bruckner would visit Gotham and grace us with his interpretations of its denizens. The rest of the figure is kind of stiff and not nearly as impressive, but that head sculpt alone gets him on this list! 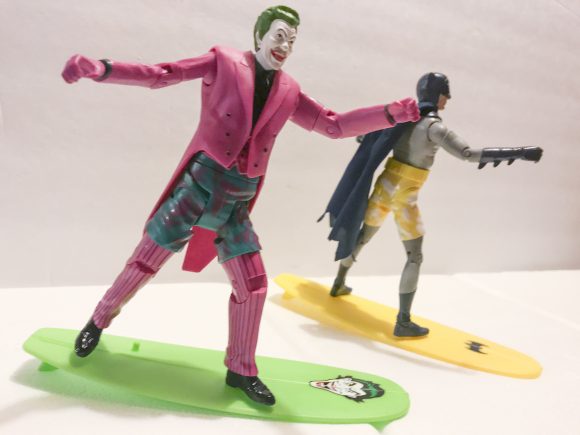 Does Cesar Romero’s Joker have a more iconic moment than when he was chroma-keyed alongside Adam West’s Batman in their fabled surfing competition in the episode Surf’s Up, Joker’s Under? Mattel was the first to hit the shelves with action figures based directly on the show once the decades-long quagmire of legalities hampering the license was untangled. Their standard Joker is fine, replete with his infamous visible mustache. But the surfing Joker, with his additional sculpted baggies and his lime green surfboard, ventures into the sublime. Figures Toy Company and Funko Pop also did their own versions of this iconic image in figure form, but the fact that you could walk into a retail store and pick this figure up a few years back, nearly 50 years after the episode aired, is still mind-boggling. Perhaps more than any other figure in the line, this encapsulates the history of the show, and its journey from well-balanced mild parody, to delightful out-and-out buffoonery. 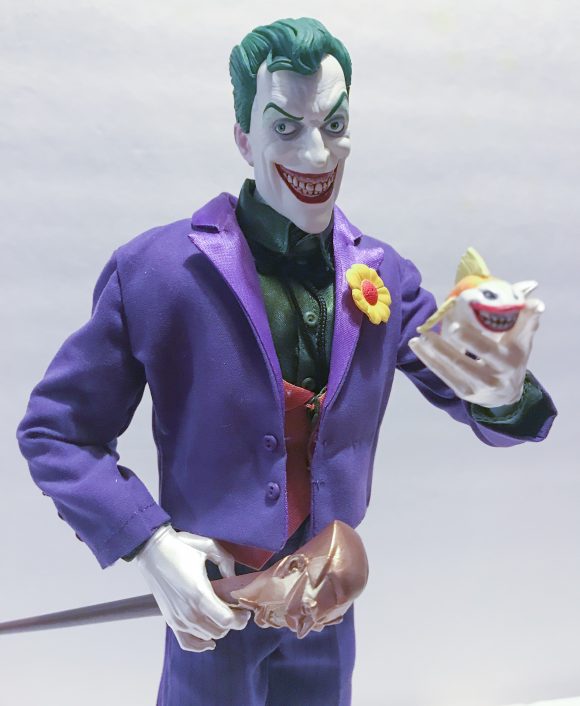 DC Direct’s line of “1/6-scale” figures is often overlooked and forgotten, in the wake of Hot Toys and similar companies dominating the field. The strange choice to go one inch above the standard size certainly didn’t help them. But the earlier figures in this line are worth a second look. Many of them are some of the nicest ever produced for the characters, at an initial price point that was much more affordable than the imports. The Joker, sculpted again by Tim Bruckner, is equal parts Brian Bolland and the Joker’s initial inspiration, actor Conrad Veidt from The Man Who Laughs. His eyes portray insanity, barely steering away before veering into being too comical, they come across as actually disturbing. He came with a nicely tailored suit, a laughing fish, some playing cards, and of course a Joker’s head cane. My only nitpick is his slightly flesh-colored ears. Were they trying to harken back to the ’60s painted Topps trading cards? 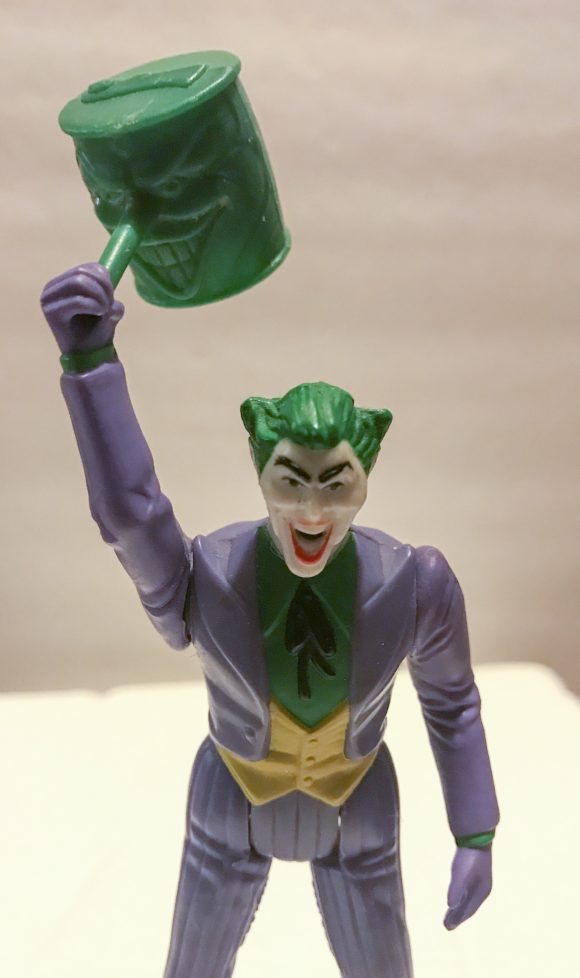 Like many of the figures in the early waves of the Super Powers line, the Joker was based directly on the style guide art of Jose Luis Garcia-Lopez. JLGL took the thin, almost inhuman-looking Joker popularized by Neal Adams and gave him a unified and distinctive look, and Kenner captured that design perfectly here. This figure single-handedly popularized the notion of the Joker wielding a mallet, which has also carried over to Harley Quinn in subsequent decades. The “Power Action Madcap Mallet” function worked like a charm for bashing your unfortunate Batman and Robin action figures! If only they gave us that Jokermobile they kept teasing us with in the included mini-comics… 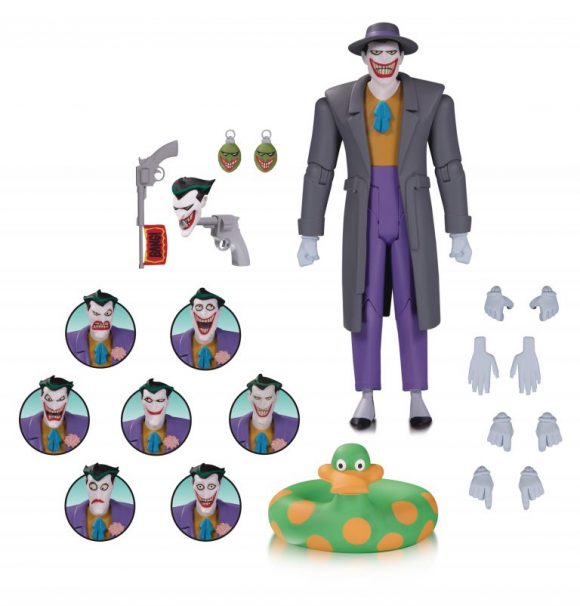 Probably the final word on the BTAS version of the Joker in action figure form, this 6-inch deluxe offering includes no less than eight head sculpts, each with a different expression based directly on a scene from the fabled animated series. Swappable arms and torsos allow you to have the Joker in his more casual purple suit coat, or his more intimidating trench coat and hat. Add in various weapons and even a green duck floatee to put around his waist, and you have the ultimate in comedy accessories for the Ace of Knaves. About the only thing not included is Mark Hamill’s voice, but you’ll hear it when you just look at this figure, anyway.

5. One:12 Collective The Joker, Clown Prince of Crime Edition, Mezco 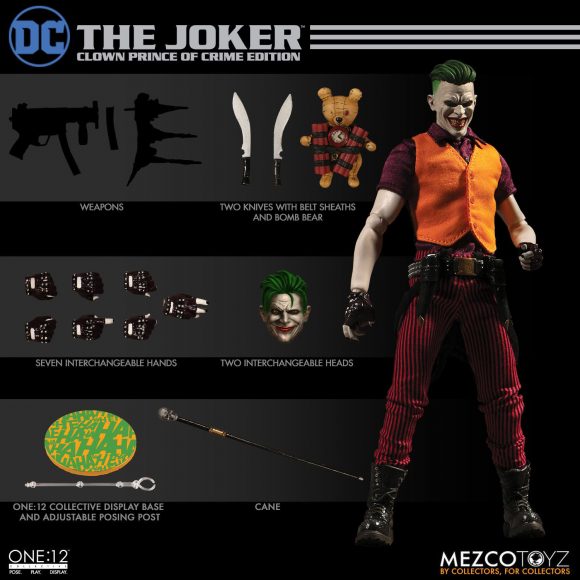 Mezco has been offering its own unique takes on classic characters in its One:12 Collective series for some time, at half the scale but a third of the price of Hot Toys and similar companies. Their Joker is no exception. His partially shaved head and swept back mane up top is similar to the current comics, but he’s rocking a post-modern interpretation of his classic purple suit. Dropping the jacket and tie and opting for short sleeves, and combat boots instead of spats. It’s a look that is still instantly recognizable as the Joker, but feels more modern and relevant to a younger audience. It’s everything the Suicide Squad film’s design wanted to be. Take the super-articulated Mezco body, add in an alternate head, several swappable hands, and lots of accessories (including a cane, this time with a skull up top!), and you’ve got one threatening looking clown who is no laughing matter. 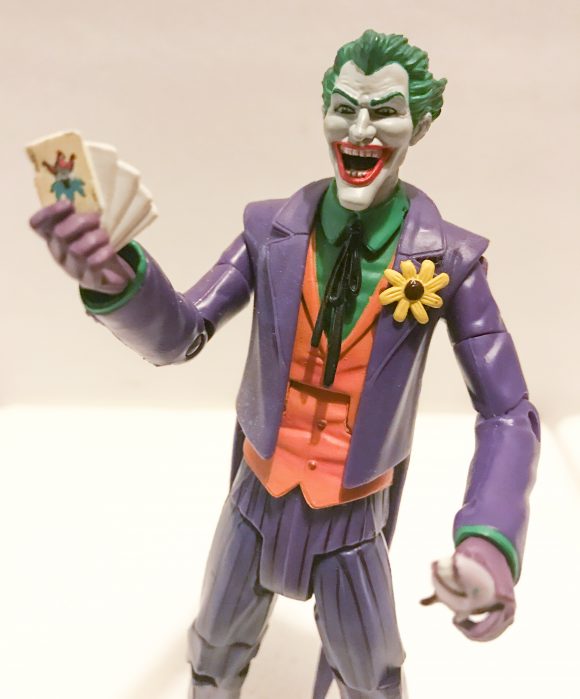 Mattel released several Jokers in their ever-changing 6-inch DC range over the last two decades, but the best is this one from the much-beloved DCUC line, sculpted by the Four Horsemen. The head sculpt is based directly on the art of Marshall Rogers and Terry Austin from their fabled run on Detective Comics with Steve Englehart. The Joker even comes with one of the infamous “Laughing Fish” from that revered storyline, as well as a flayed deck of playing cards, with Jerry Robinson’s original Joker design emblazoned on them, a jester’s cane (because) and a Madcap Mallet, just like the Super Powers figure! 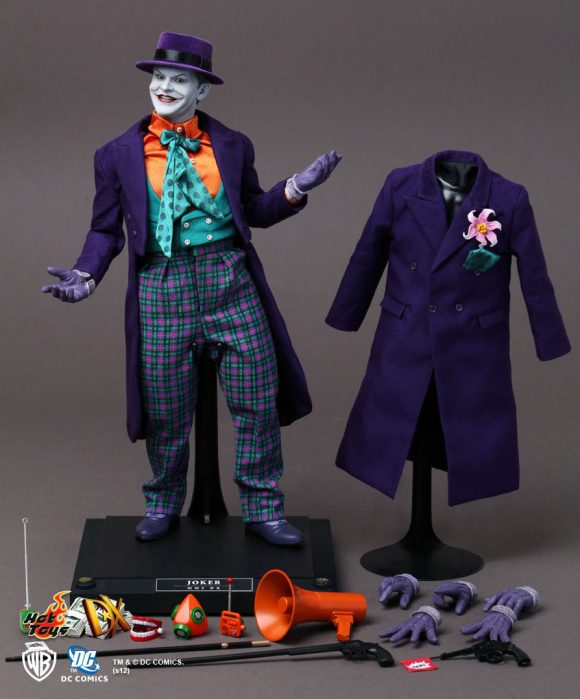 It almost seems unfair to include Hot Toys on these types of lists. They have aesthetically moved so far beyond the origins of the action figure genre, it’s hard to call them “toys’ despite their name. But when a “greatest” list comes up, they demand inclusion by default. This figure of Jack Nicholson’s iconic portrayal of the Joker is one of the best among the best. You can just feel the grease paint on his face. The materials of his costume are perfect, from his satin orange shirt to his velour-like jacket. He actually comes with two jackets, his fedora, and just about every accessory he used in the film, from the gas mask he gifted Vicki Vale to the megaphone he uses at the parade, even the chattering teeth from the cathedral finale. And of course, that ridiculously long barreled gun, which somehow managed to bring down the Batwing! Hot Toys also released a mime version as seen in the film, but you can’t beat the classic look. 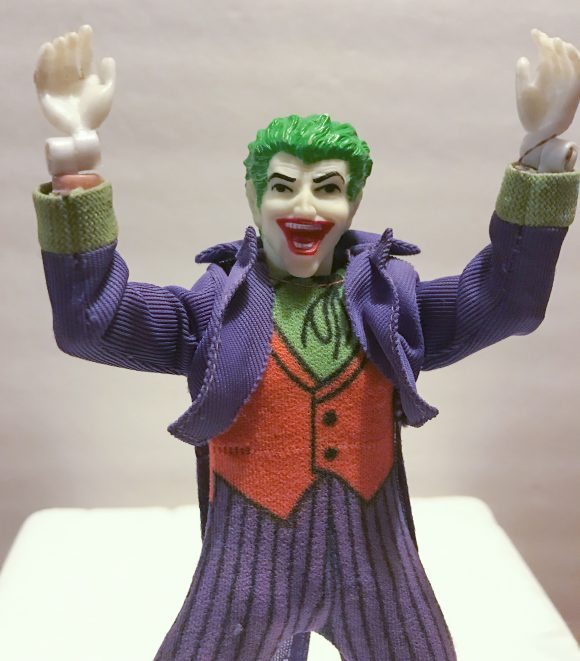 Looking as if he stepped right off of Carmine Infantino and Murphy Anderson’s iconic 1966 poster, Mego’s Joker represents the company at a turning point in their massively successful World’s Greatest Super Heroes line. Expanding the line into villains (three of which were Batman foes, and four if you count Catwoman from the Super-Gals subset) set a new standard in superhero action figures. Now, every subsequent toy company HAD to release the villains. And if you made the villains, you had to make the most popular, the Joker. Sure, Mego reproduced the Joker’s shirt, pants and vest all as one screen-printed jumpsuit, but the addition of the coat with tails, and (strangely brown) shoes give the figure a slightly more deluxe feeling. And that head sculpt…WOW! It still stands up today as one of Mego’s very best, and perhaps the greatest interpretation of the Silver Age iteration of the character in plastic. And hey, the Joker is the only villain in the line to get a dedicated vehicle! Only in the ’70s would the Joker be seen cruising around in a converted Volkswagen Microbus for his Jokermobile! 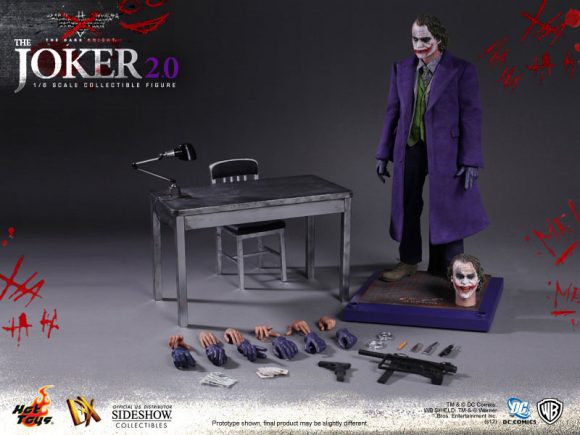 This is Hot Toys’ second attempt at Heath Ledger’s Joker from Christopher Nolan’s The Dark Knight. I own the first, and it’s not a bad figure by any means, but this one transcends the toy genre into something eerily life-like. Two head sculpts capture the shifting moods of Ledger’s enigmatic Clown Prince. You can almost hear him murmur, and his lips smack when staring at the included smirking face, and feel the echoes of his cackle in the interrogation room when looking at his laughing visage. This set even includes the table, lamp and chair from that iconic scene, in addition to various guns, knives, playing cards, handcuffs, hands, and oh… that pencil. Just like that memorable trick, this figure is pure magic.