To have and to hold…

So you mighta heard that Batman and Catwoman are supposed to get hitched July 4 in Batman #50. (Yes, the details have been spoiled elsewhere but we’re not playing along with that.)

Anyway, you can recreate their chemistry thanks to podcaster and 13th Dimension contributor Chris Franklin, who has picked for you 13 GREAT BATMAN & CATWOMAN ACTION FIGURES – Dan: 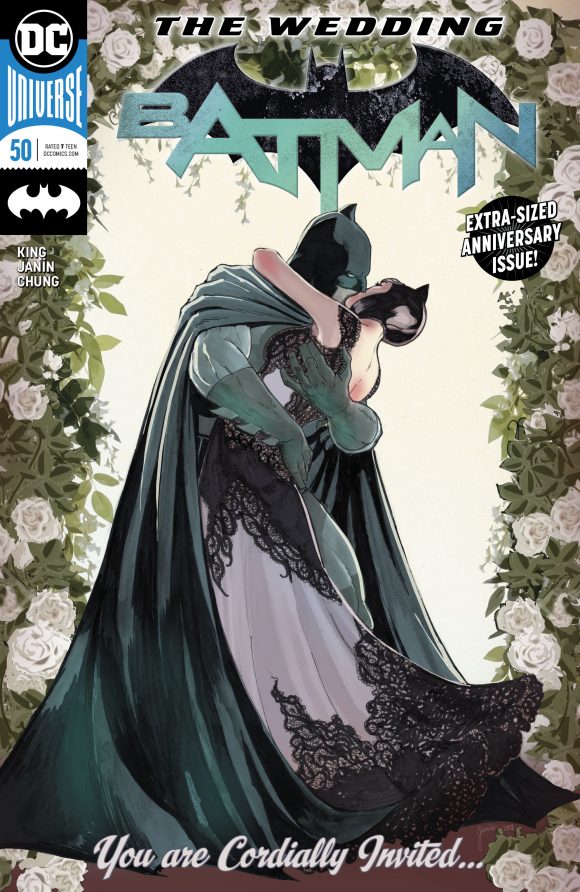 So the Bat and the Cat are going to tie the knot. Or, they are PLANNING on tying the knot in Batman #50. Whether the Caped and Clawed Couple make it through their vows or not, they shall be forever linked. In comics, in movies, TV series, and even toys!

Yes, there have been MANY more Batmen than Catwomen when it comes to action figures (partially due to that age-old belief that girl figures give young boys cooties) but the complex Miss Kyle often accompanies her masked paramour into the toy aisles. What follows are 13 Action Power Couples from the Dark Knight and Princess of Plunder’s long histories as playthings:

Old-time fans and comic historians know that the Bat and the Cat actually DID take their vows IN continuity more than 40 years ago. On the long-lost Earth-Two, Bruce Wayne wed a reformed Selina Kyle, and they even had a child, Helena, who went on to become the Justice Society’s Huntress. The tale of how their attraction turned into full-blown romance was exquisitely told by one of Batman’s greatest scribes Alan Brennert, with art by Joe Staton and George Freeman in The Brave and the Bold #197 (April 1983).
If you want to recreate this story, your best bet is to grab the appropriate figures from Mattel’s 2011 Batman: Legacy series. Complete with their proper Golden Age looks, these two figures are ready to face their fears and admit their feelings to one another. 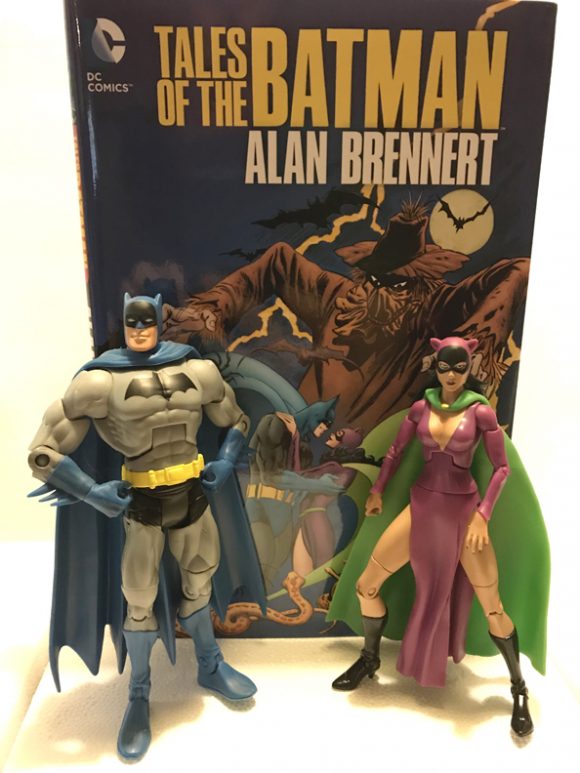 DC Collectibles has done a fantastic job with their Batman: The Animated Series offerings, combining the Bruce Timm design aesthetic with the 6-inch, multi-articulated style that modern figure fans prefer. These two examples brilliantly capture the many rooftop rendezvous that the Masked Manhunter and Feline Fury shared. You can just hear Kevin Conroy’s gravely voice, and Adrienne Barbeau’s sultry purrs. 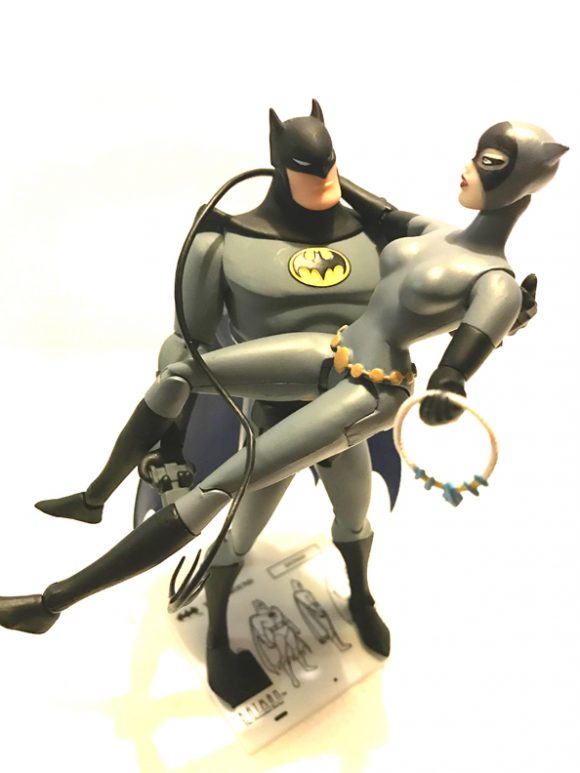 Combining the look of the show with a fun, retro-toy feel, Funko’s 4-inch Batman Classic TV Series is a line we would have liked to have seen in the ’80s when this scale had its heyday. This is Batman at his squarest, and Catwoman is around to challenge the Duly-Deputized Agent of the Law’s composure. 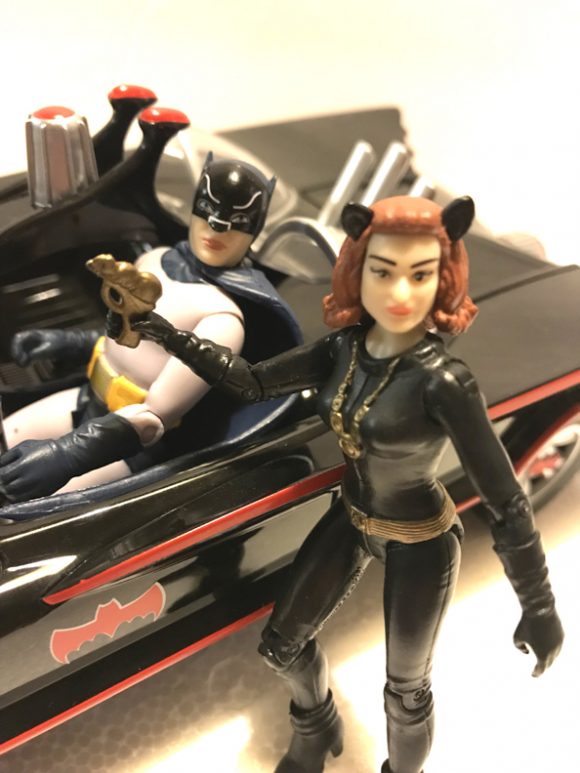 Screaming the ’90s like few other examples comes the Kenner 12-inch Legends of Batman 2-pack. Both figures are decked out in their then-current costumes, with Catwoman sporting her infamous Jim Balent-painted-on purple jumpsuit. The figures are somewhat limited in the articulation department, but at least Catwoman’s proportions are a bit more…realistic than what was seen in her title at the time! 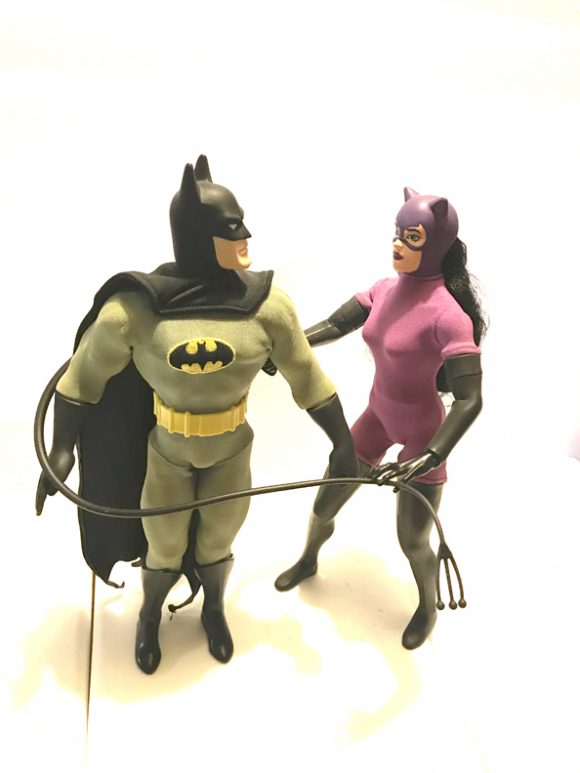 Another Bat-Cat couple that apparently had a happy ending together, Mattel’s Dark Knight Rises Movie Masters 6-inch Batman and Catwoman have good likenesses of Christian Bale and Anne Hathaway. Plus, there is a Mattel Batpod to scale for them, so they can ride off to a Florence cafe together! Selina seemed pretty fond of his hog, so I hope Bruce had that locked-down in the pre-nup!!! 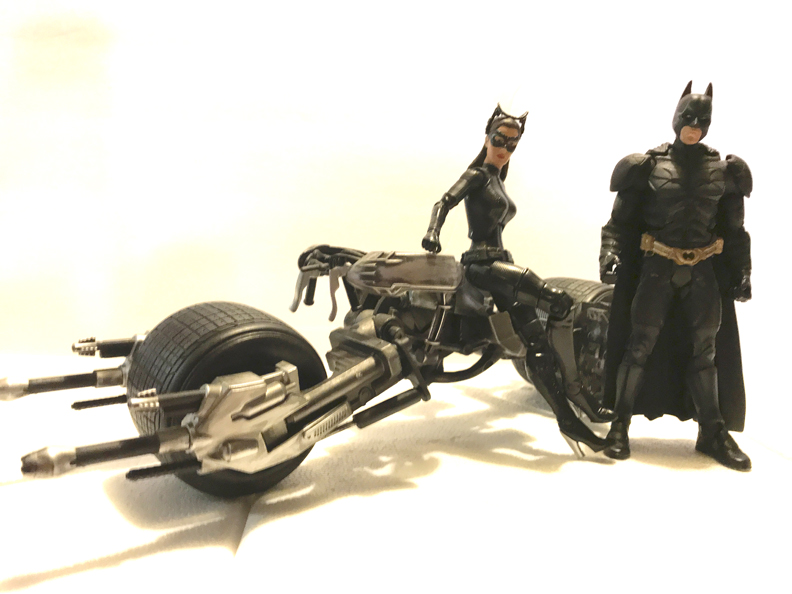 DC Direct’s Pocket Heroes line was a strange one, and seems largely forgotten today. In 2004, DCD released a Batman five-pack, including Batman and Catwoman. Even on her tiny printed face, you can see Selina is packing a non-pocket-sized amount of attitude. The stern Batman that accompanies her looks like he can handle it! 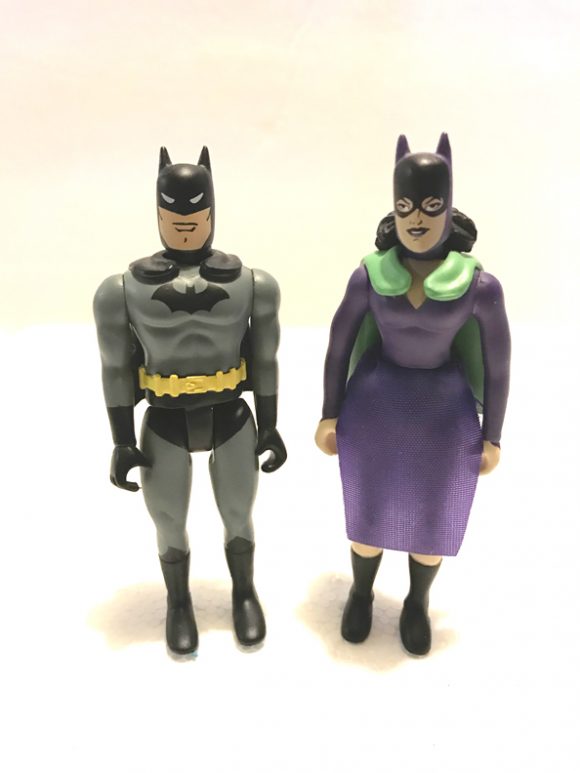 1992 was a huge year for both Batman and Catwoman. While fans still debate the merits of Batman Returns, most will agree Michelle Pfeiffer’s Catwoman was the highlight of the film. Kenner did an excellent job adapting Michael Keaton’s likeness, but they kind of dropped the ball on their Catwoman. She’s a bit of a mess, but at least she LOOKS like the movie Feline Fatale, which is more than I can say for their re-heated Super Powers Penguin from that line… 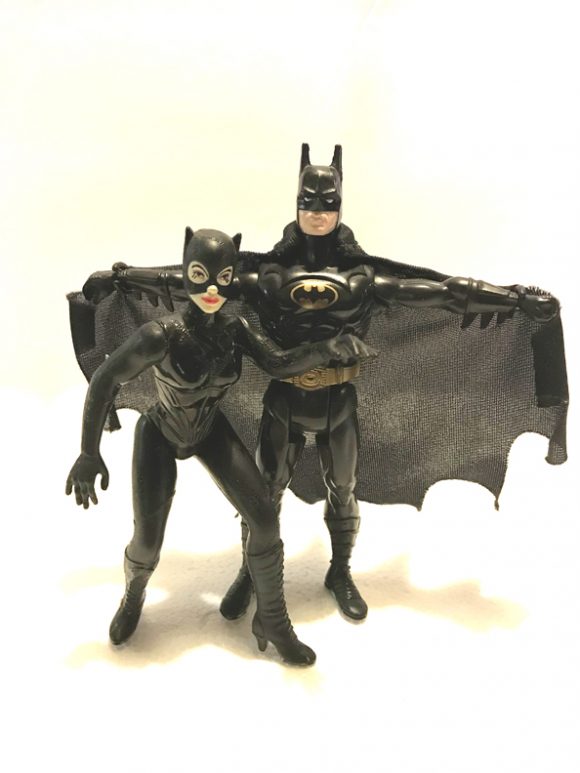 Lego has made a TON of Batmen for over a decade, and they’ve produced quite a few Catwomen too. Their Batman Classic TV Series Batcave set has my favorite, though. You can recreate Catwoman’s original “demise” from Julie Newmar’s first appearance in The Purr-fect Crime/Better Luck Next Time! (I threw in the Batcopter from the set in the back, because I know Dan loves that Batcopter!) 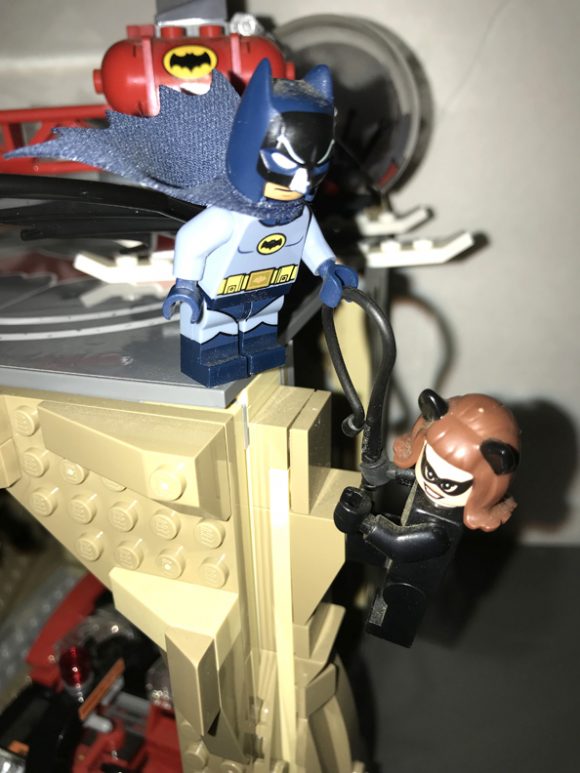 When Mattel took over the DC master toy license from Kenner/Hasbro at the start of the millennium, they played it safe and continued to offer new figures based on the already-ended New Batman Adventures version of the Animated Series. This included a two-pack featuring the diminutively slinky black Catwoman redesign, and one torn up Batman! Clearly, hell hath no Feline Fury like a woman scorned! 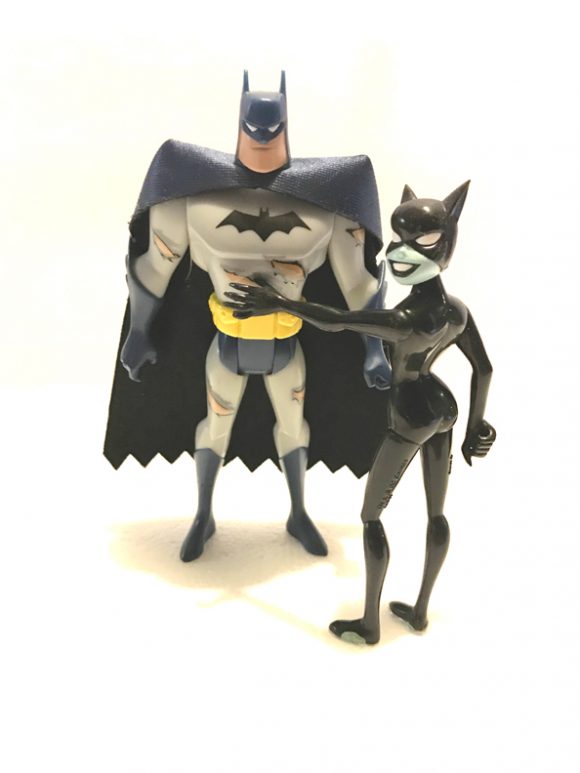 The Applause company made a TON of limited-articulation plastic statues in the ’90s. Their Batman Returns line sported some decent likenesses, and perhaps the most appropriate physique of a Michael Keaton figure produced during his time in the cape. Their Catwoman handily wins in the Pfeiffer department over Kenner’s offering. The figures are a bit stiff however. But that works perfectly if you think of them standing in rapt attention at the altar, nervously choking out their vows. Hey let’s throw the Applause Penguin in as minister. He’s already got the tux! 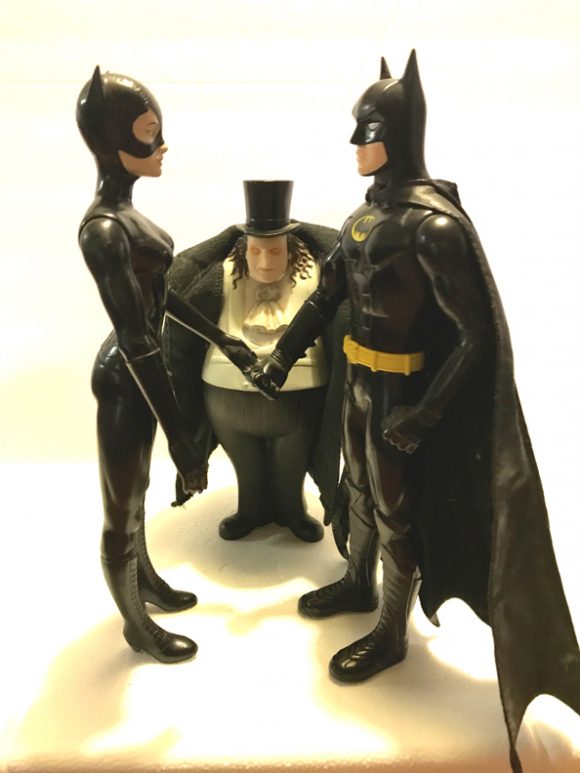 Mattel’s 6-inch Batman Classic TV Series line was unfortunately short-lived, but they managed to produce some truly lifelike figures at this scale. You can hear that wonderful catch in Adam West’s voice as Newmar’s Catwoman begins to melt the icy reserve of her Masked Manhunter. I’m sure she’s already told Batman what she’d do with the interloping Robin if they were to hook up… 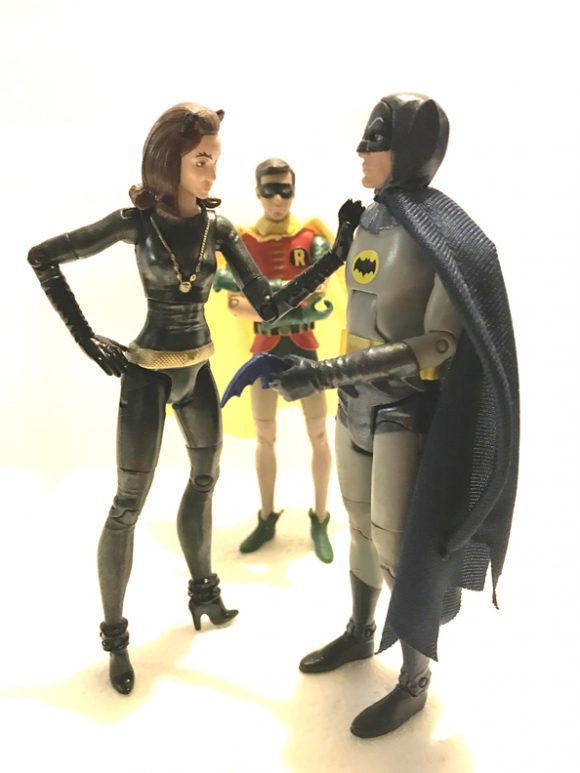 DC Direct threw its hat into the 1:6-scale ring with a line of Deluxe 13-Inch Collector Figures in the mid 2000s. Unfortunately, the scale and execution were off compared to burgeoning brands such as Hot Toys. Nonetheless, these are impressive figures, and the line gave us perhaps the best Catwoman in her modern, Darwyn Cooke-designed leather suit and goggles. They were no slouch in the articulation department either, as you can see here, with Batman nabbing his prey in the act, and hoping to make friendly with the enemy. 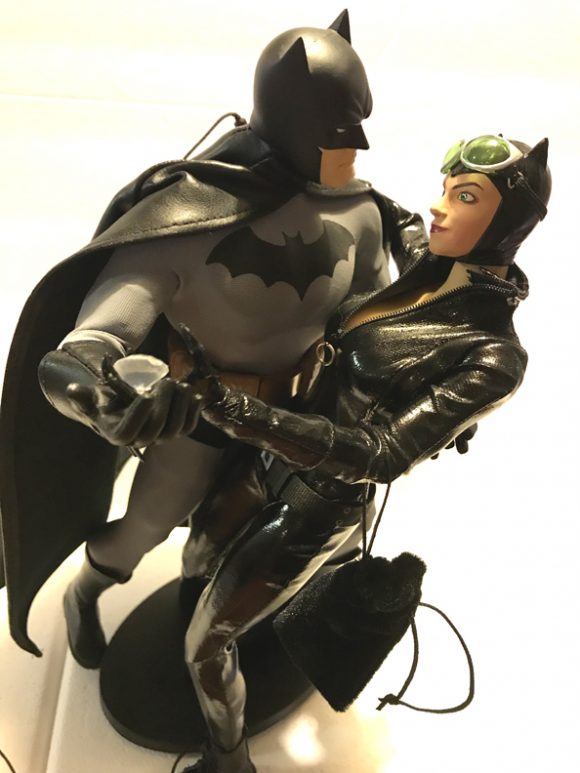 We saved the first for last! Mego produced the first true action figures of Batman and Catwoman for their World’s Greatest Super-Heroes line, which debuted in 1973. Mego was in the moment, making Catwoman in her then-current “pirate” costume. It’s not an iconic design for sure, but it makes for a colorful toy, and a fun picture, as she and Batman drive away from the chapel in their slightly under-sized Batmobile. 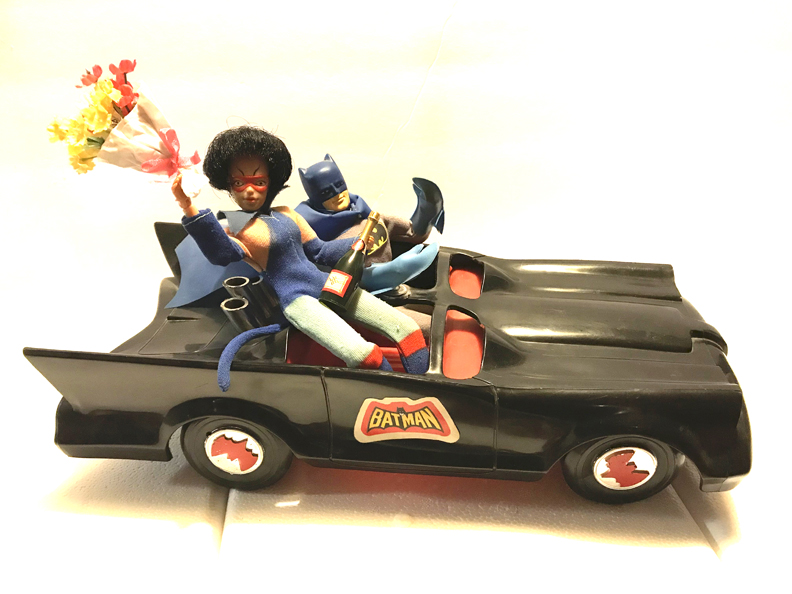 Selina is about to throw her bouquet, but did the wedding go off without a hitch? Did Batman actually put a ring on it? Well, we won’t know until we read Batman #50, but rest assured, no matter what, the Dark Knight and the Feline Fatale’s paths will always cross, no matter the medium!