BATMAN came out 33 years ago!

BATMAN ’89 WEEK wouldn’t be complete without a look at all the incredible swag that was produced to capitalize on the second coming of Batmania.

So, we’ve called upon Chris Franklin, host of the Fire & Water Network’s Those Wonderful Toys podcast to bring you, well, THE TOP 13 WONDERFUL BATMAN ’89 TOYS – RANKED.

Oh, and if you want even more Batman ’89 toyhem, be sure to check out his latest episode (click here). You’ll be really glad you did. 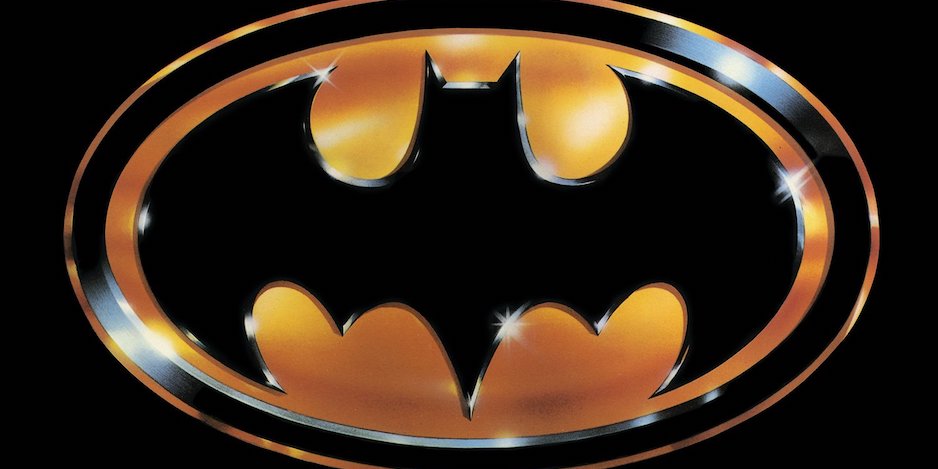 Two years prior I had decided I was too old to play with toys anymore, but I could become… a COLLECTOR. The burn was I picked about the worst year in the history of superhero merchandising to do so. But the Batman movie would change all of that. And soon, the flood of merchandise began, as history repeated itself, and the Caped Crusader Dark Knight dominated the pop culture landscape and store shelves once more, just like he had in 1966.

The items ranged from movie accurate, to comic-inspired, but it didn’t matter. It was all hitting to coincide with the biggest planned media blitz in film history, one that set the template for blockbuster merchandising that is still being followed today.

Many awesome items based on the first movie have come since, but we’ll give Hot Toys and NECA a pass this time, and concentrate on the toys released around and after the first film (and before Batman Returns). 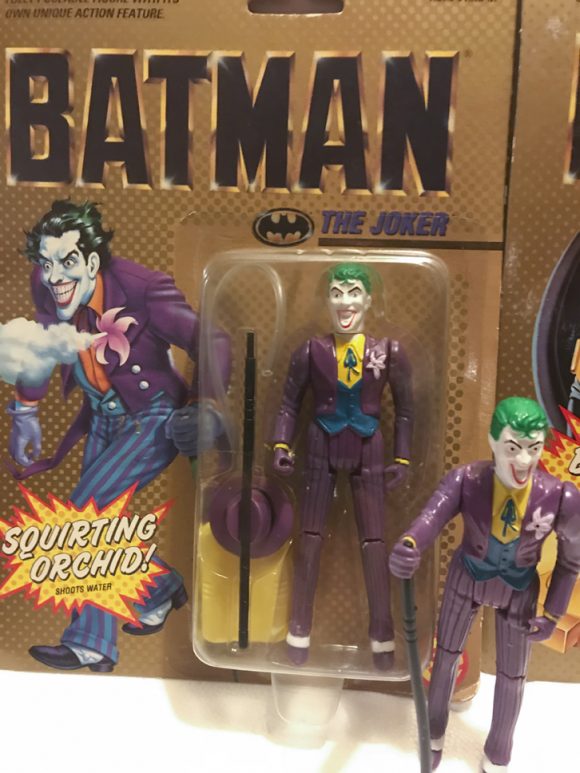 12. Topps Candy Heads. The Topps company had a lock not only on movie tie-in trading cards, but also movie-related candies! Just as they had with the Star Wars franchise, they released small, candy-filled heads of both Batman and the Joker. The sculpts are very nice, even if the simple deco on the Joker obscures the accurate Nicholson likeness. The less complicated Batman captures Keaton’s look surprisingly well, especially for such a cheap price point. Despite not being true toys, these are perhaps the most faithful depictions of the actors we got in the summer of 1989. 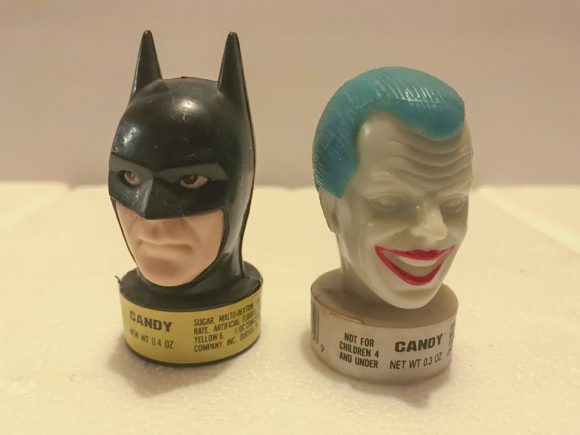 11. Toy Biz Batman Batmobile.Toy Biz’s Batmobile is a pretty solid depiction of the Anton Furst-designed car…minus the roof, unfortunately. No doubt left off to accommodate Batman’s ears and the gear shift that shot missiles from under the machine-gun hoods. The convertible design makes it an odd hybrid of the ’80s and ’60s Batmobiles. Later releases of the car came with the armored cocoon seen in the film, so I wish I’d held out a bit on this one! 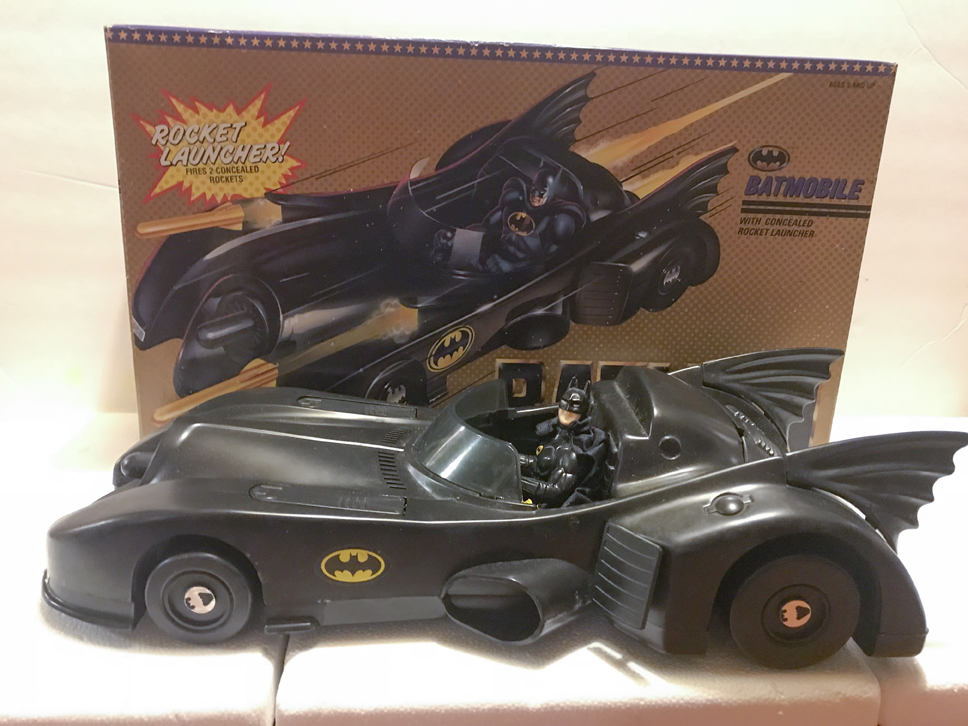 10. Ertl Die-Cast Vehicles.Ertl was perhaps then best known for making accurate farm tractor replicas, but they took the ball dropped by Corgi sometime in the ’80s and ran with a line of die-cast vehicles based on the film. From micro sets to the usual 1/64 scale to bigger, heavier affairs, and even their unique Wrist Racers (cars that launch from a band on your wrist!), there seemed to be an endless supply of Batmobiles, Batwings and Joker Vans on the shelves everywhere. My only quibble was the Bat-symbol they slapped on everything (it’s kind of obvious who these vehicles belong to, people), and the strangely deformed Joker Van in the standard “Hot Wheels” scale. Other than that, this line still holds up. That large Batwing is HEAVY! 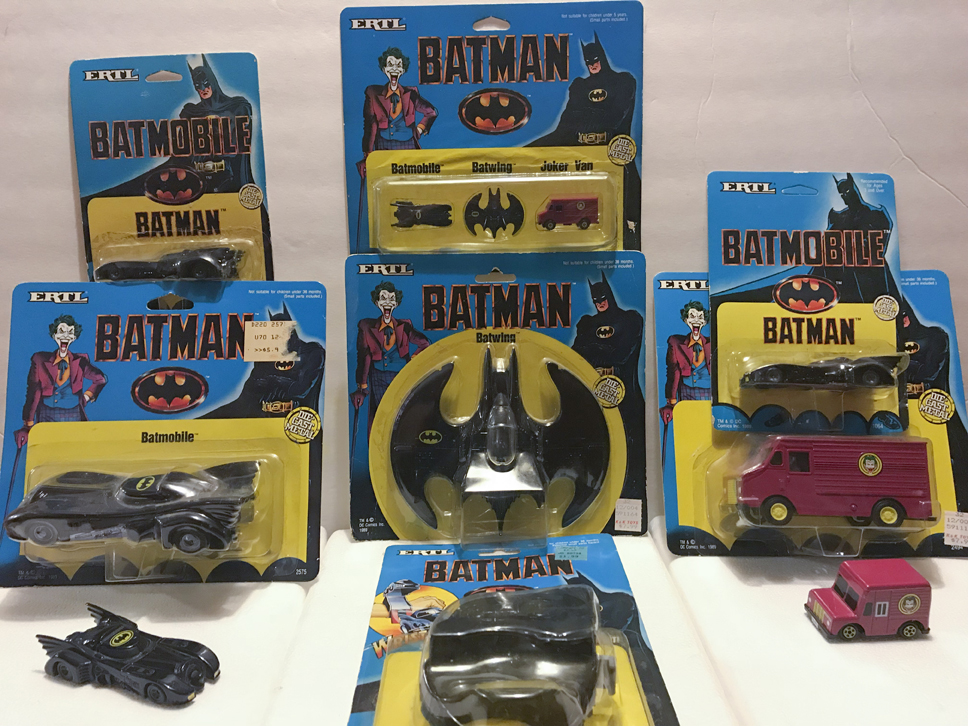 9. Toy Biz Batman Batwing. Batman’s new set of wings was quite the sight to behold in the film. Toy Biz accurately recreated Bruce Wayne’s ultimate expression of branding awareness, and even included the scissor-like mechanism in the front, good for stealing the Joker’s balloons, or just picking the figure up and subjecting him to the torture of 500 mph winds. If only the included missiles weren’t flimsy suction darts. 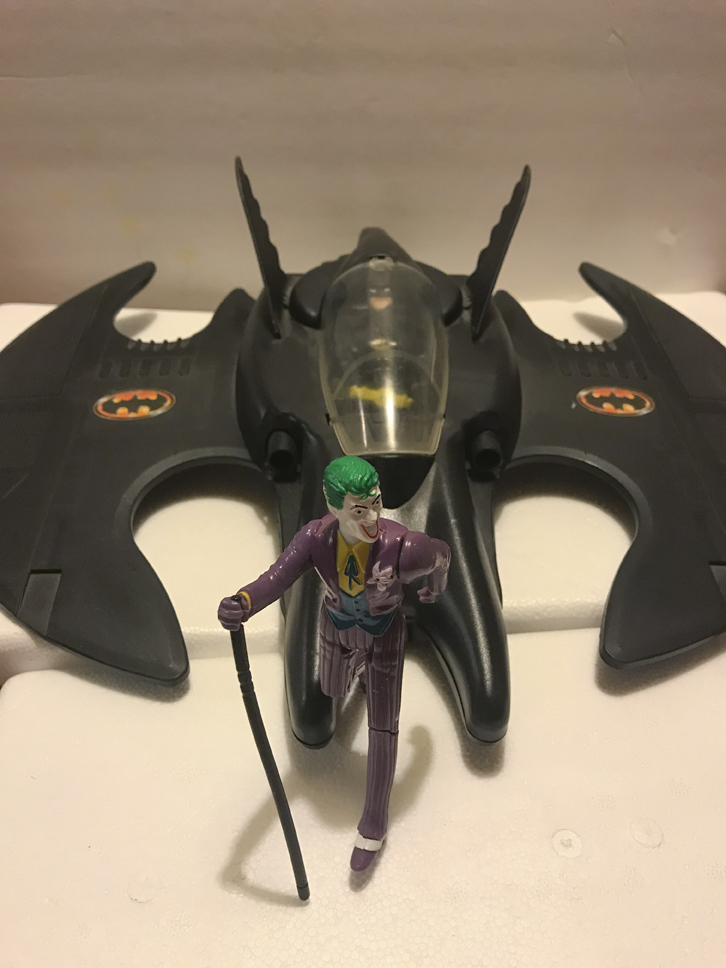 8. Toy Biz Batman Figure.Perhaps THE time capsule toy item for Batmania ’89, Toy Biz tried four times to get the head on their Batman right. I still prefer the chubby “round face” version, just because it’s the first one I owned. Not looking a thing like the Super Powers Batman in black we see on the package back, this Batman’s sculpt does resemble Michael Keaton’s costume for the most part, and his fun working Batrope- in-belt mechanism provides the means to recreate several key scenes in the movie. Mine still works like a charm, 30 years later! 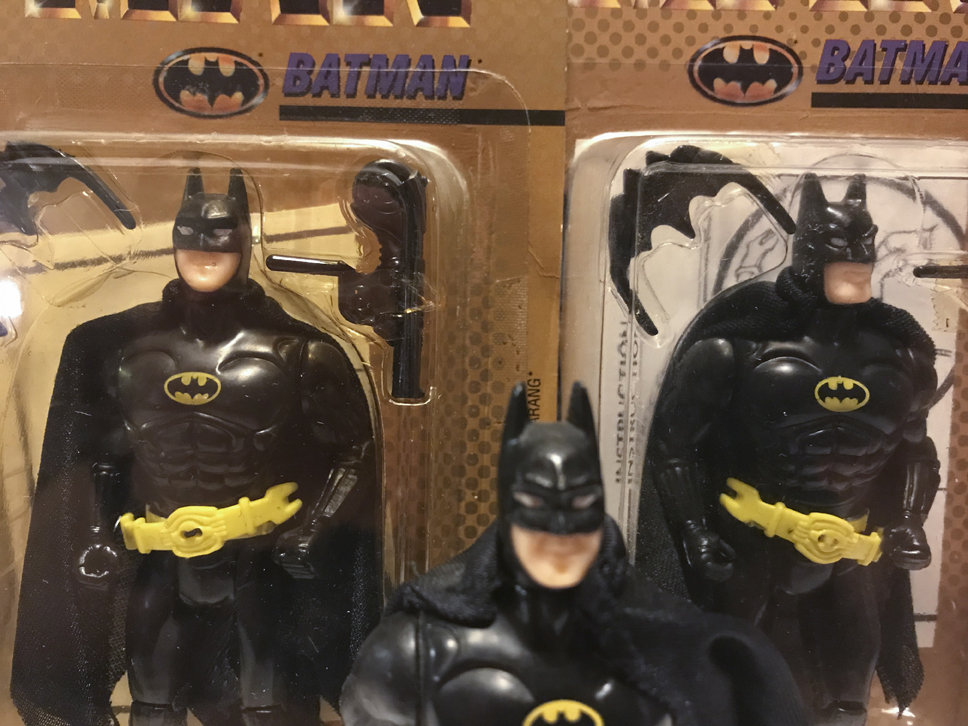 7. Kenner Dark Knight Collection Sky Escape Joker.Kenner won the license back from Toy Biz in early 1990, and their first stab at the Joker actually reused the Super Powers body Toy Biz only hinted at. He did receive a new head sculpt appropriating a much thinner Jack Nicholson. He also came with a wacky mini-copter backpack to elude the Dark Knight. But the real neat thing about this figure is the color change action feature. Dip his head in cold water, and he goes from perma-white to Caucasian, so you can recreate those scenes in the mob board meeting, or the melee at the museum! 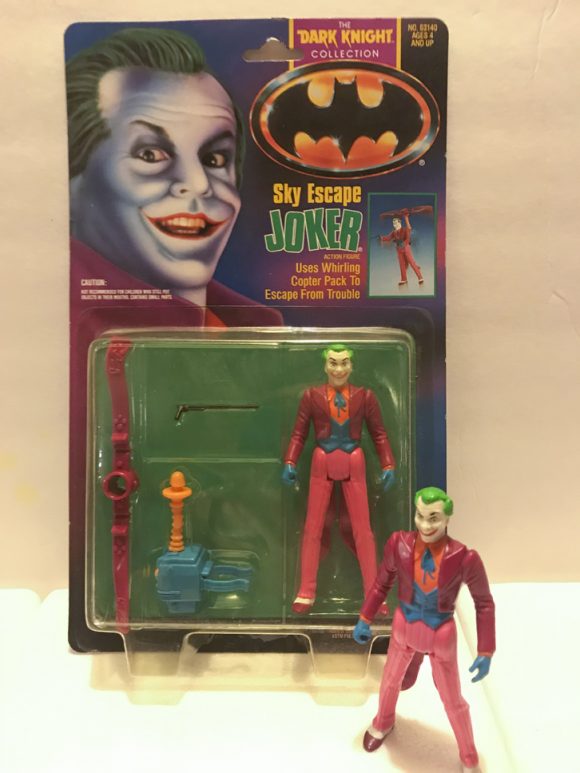 6. Toy Biz Batman Batcave.The centerpiece of Toy Biz’s line, the Batcave takes the exposed pipes, platforms and bridges from the movie set and recolors them in bright, toy-like hues, but it still looks great. Packed with some pretty inventive action features, it foreshadows the innovative company we would come to know through their later Marvel lines. The stickers showing actual movie scenes on the Batcomputer monitors was a nice touch, as was the inclusion of the bar you can hang your Batman upside down from, just like that strange scene during his sleepover with Vicki in the movie. 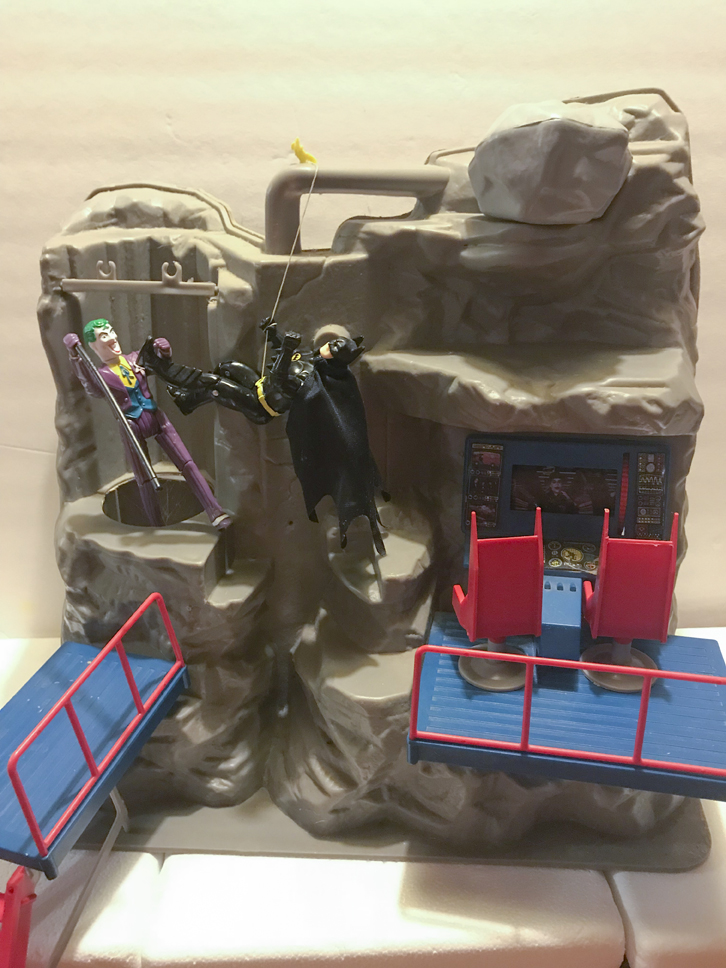 5. Kenner Dark Knight Collection Shadow Wing Batman.The second movie-accurate Batman released by Kenner in the Dark Knight line, after the first wave “Crime Attack” Batman figure, “Shadow Wing” Batman trumps that one with its Super Powers-like play feature. Squeeze his legs and his arms pop out at the side, spreading his attached cape. It’s a very simple way to convey the “Creature of the Night” aspect that was so important to this version of the character, and mimics how well Keaton used the suit. The sculpting captures all the armor details in the gloves, which the standard Batman mold does not. 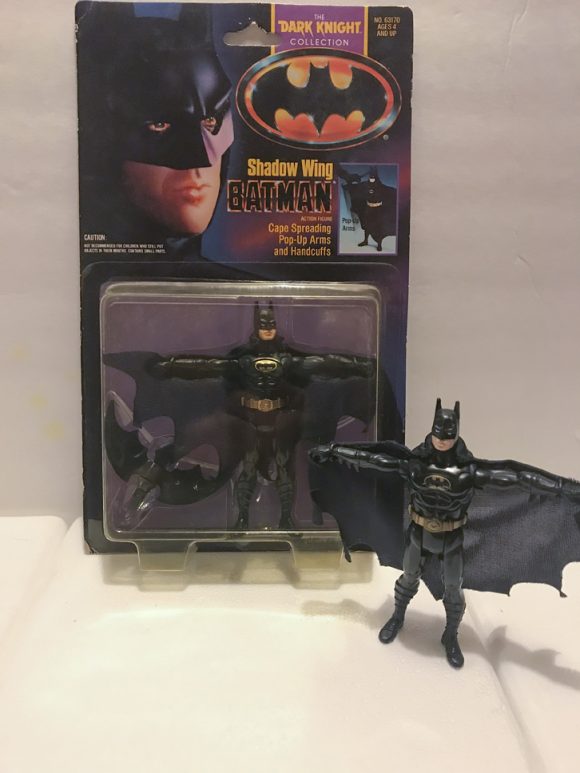 4. Kid Biz 8-Inch Batman. Something I wasn’t aware of until a few years later was this foreign release of a Mego-style Batman figure. By 1989, Mego had been bankrupt and out of business for seven years, but apparently overseas the format still had its fans. A company called Kid Biz, apparently connected to Toy Biz in some way, produced an 8-inch Batman figure with cloth costume, and released it in Australia (Bikin released it in Belgium as well). While the head sculpt is a generic and rather happy-looking Dark Knight, the black suit, belt, boots, gauntlets and sculpted utility belt definitely make it a movie-tie-in. As does the card front, which uses the Toy Biz packaging design, with Jerry Ordway’s painting of Batman from the prestige version of the movie adaptation! 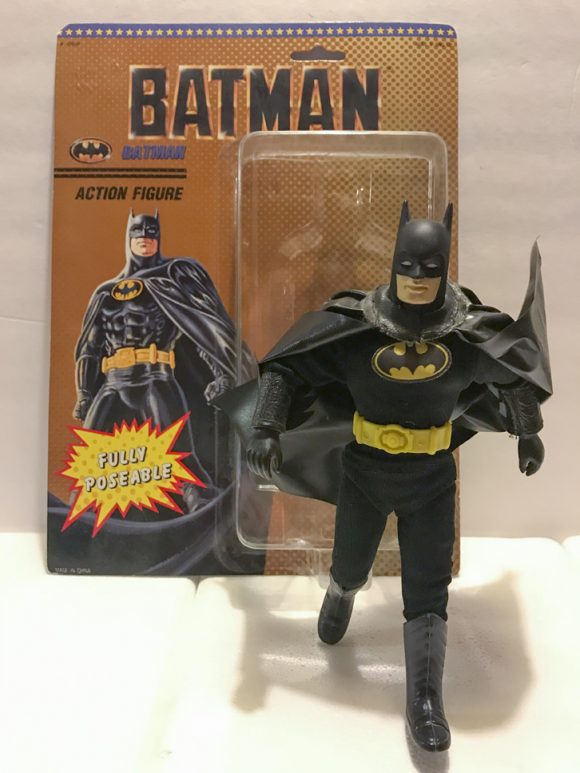 3. Hamilton Presents Large Figures.The Applause Company was ubiquitous at gift shops in the ’80s and ’90s, and released small PVC standing figures of Batman, Robin, Joker and Penguin in their classic designs, as well as dangling figures, hanging on ropes from a suction cup. But their lasting gift to Batman fans was their large, 15-inch scale figures, released through their Hamilton Presents subsidiary. Sculpted by Tim Bruckner, who would go on to work wonders with the DC Universe for DC Direct, these were as close to “collector dolls” as we were going to get in 1989. Batman (released in both comic blue and gray, and movie black) looked like a Jose Luis Garcia-Lopez drawing come to life. Robin had quite a bit of Burt Ward in him. And the Joker…man, he looked demented! These large figures really spruce up any Batman display, even today. 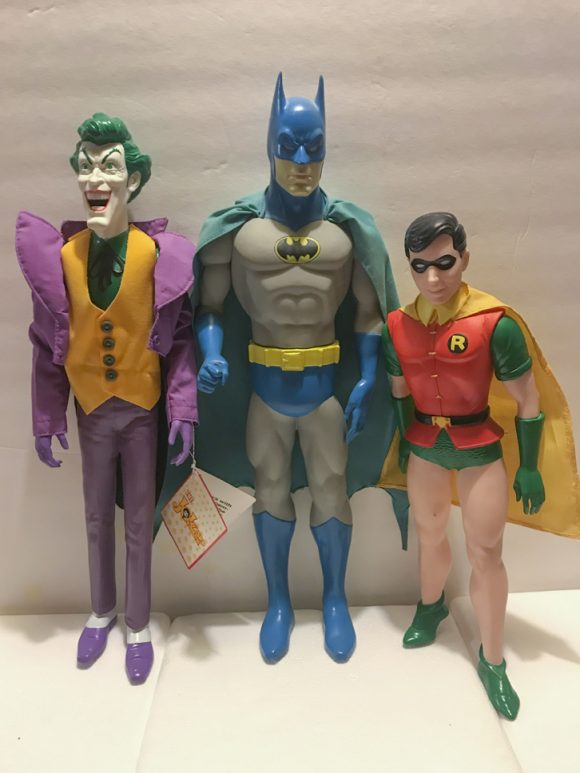 2. Kenner Dark Knight Collection Batmobile. Kenner showed Toy Biz how it’s done with their version of  Furst’s Batmobile. Although the passenger seat is missing, Kenner did give us an accurate sliding roof, and the flip up machine guns seen in the film…even if they do rankle the feathers of longtime fans who know Batman would never use them. There’s a not so-accurate use of the turbine intake as a launching missile, but hey, every vehicle had to fire a missile back in the late ’80s/early ’90s. It was OSHA-required. Kenner tops the car off with a sweet button activated turbine flame in the back, harkening back not only to the film, but the classic TV series. 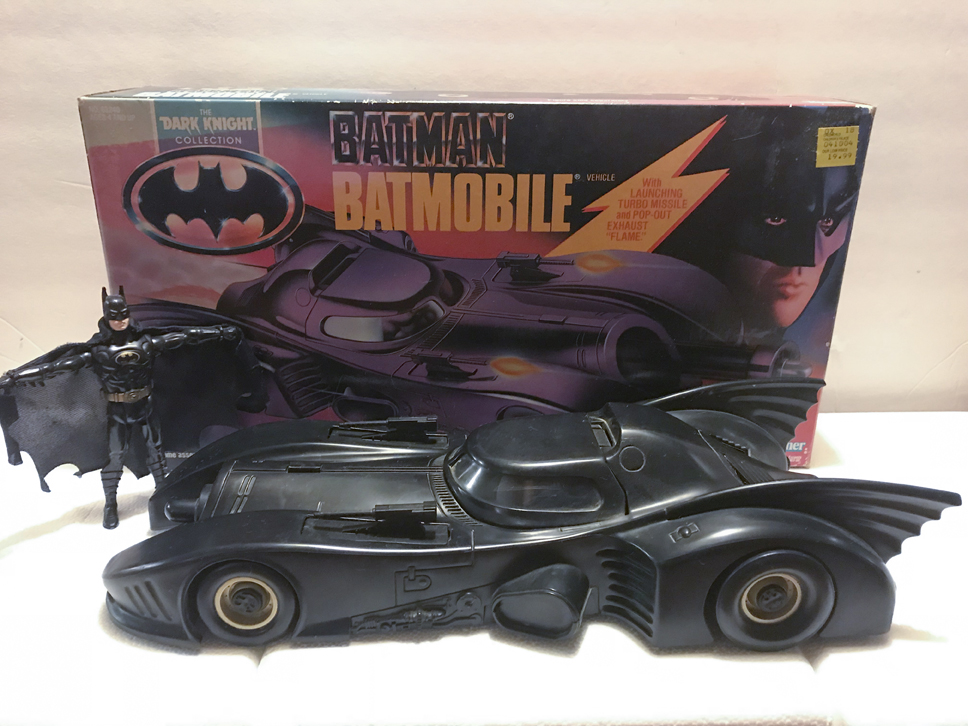 1. Kenner Dark Knight Collection Bruce Wayne Batman.Hands down my favorite figure in the Dark Knight Collection line. The likeness of Michael Keaton is still the best unmasked sculpt produced to date. Sure, the armor looks a bit clunky when in use, but there’s no denying the cool factor of putting the chest armor, gloves, boots and cape and cowl onto this figure. He looks fantastic just holding the cowl as well. Despite the fan outcry that followed his casting, Keaton’s nuanced, and damaged Batman has endured, and reached a new level of appreciation among many fans. With our beloved Adam West gone, he is to many the living embodiment of the Dark Knight of our youth. And who wouldn’t love to see him play Bruce Wayne once more in a Batman Beyond film? 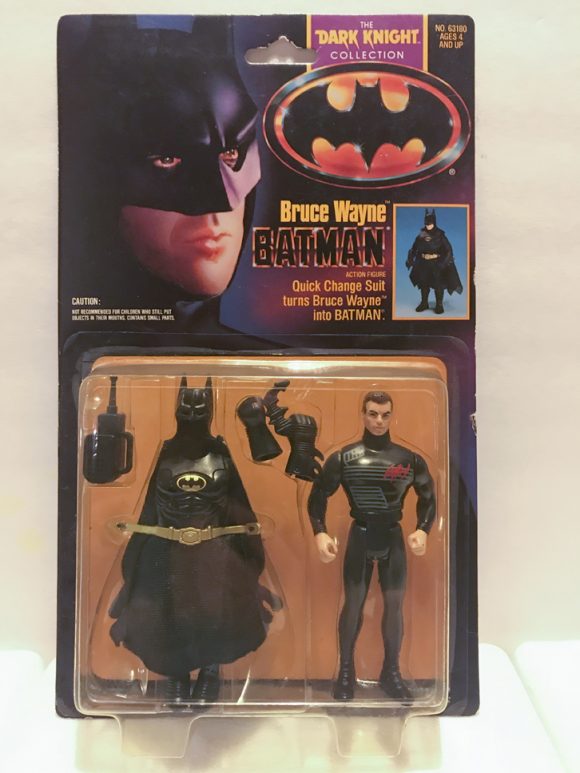 Chris Franklin is a graphic designer, illustrator, and podcaster. Be sure to check out his Fire & Water Presents: Those Wonderful Toys episode on Toy Biz’s Batman ’89 line. Click here.