THE JOKER COMES ALIVE: The Clown Prince of Crime on Glorious Vinyl

Rob Kelly wears a lot of hats. Podcaster, 13th Dimension columnist, all around bon vivant. He also happens to be one of the world’s foremost authorities on Power Records, Peter Pan Records’ adventure imprint that gave us ’70s kids everything from DC’s and Marvel’s greatest heroes to Planet of the Apes adaptations and Star Trek stories.

Since it’s JOKER WEEK, I invited Rob to tell us all about the greatest of these vinyl tales — Stacked Cards, starring Batman, Robin … and a certain green-haired psychopath. 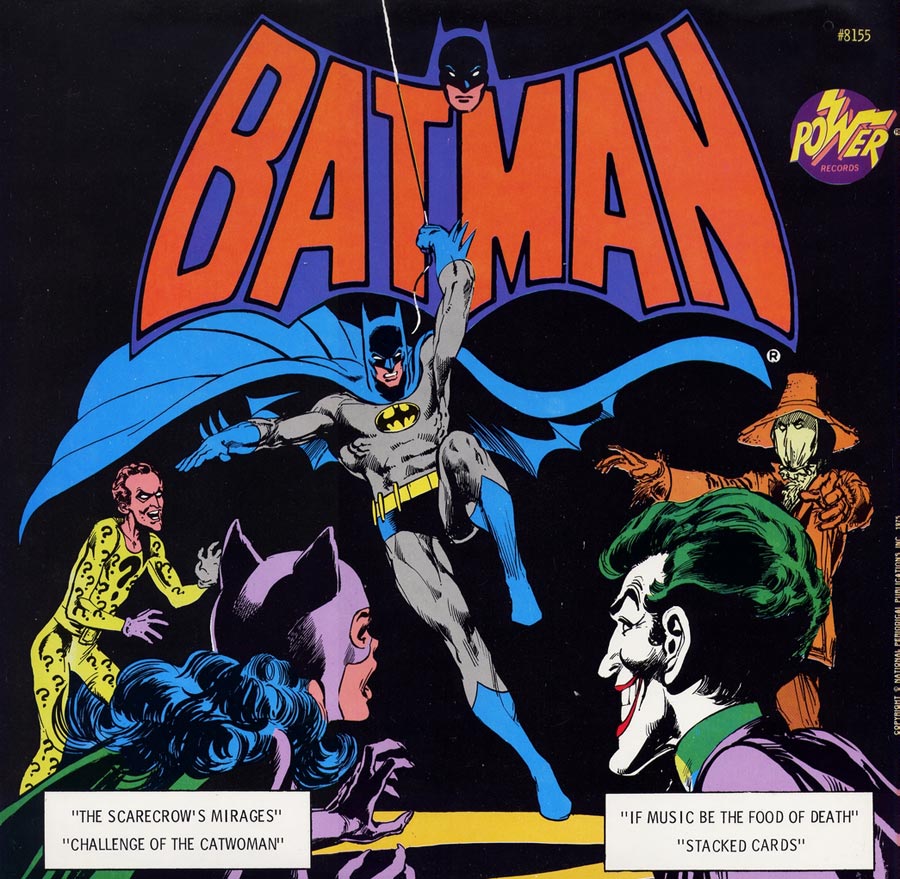 For anyone who grew up in the 1970s and was a comic book fan, Power Records featured some of the most exciting stories out there, because they provided something extra: an audio adventure along with a comic book starring some of your favorite heroes — Superman, Spider-Man, the Hulk, Wonder Woman and, of course, Batman. And where Batman is, the Joker is sure to follow!

The Clown Prince of Crime’s one and only Power Records appearance was in an adventure called Stacked Cards. Issued in 1975 as part of an LP (simply titled Batman) and as its own book-and-record set, both editions feature beautiful, iconic art by the legendary Neal Adams. In particular, the cover to the solo release is so iconic it’s kind of amazing it hasn’t been repurposed for other Batman merchandise.

Like some of the other Batman stories produced for these records, Stacked Cards is a weird hybrid of the 1960s TV series and the dark, noir-ish feel that creators like Denny O’Neil and Neal Adams were going for in the comics. 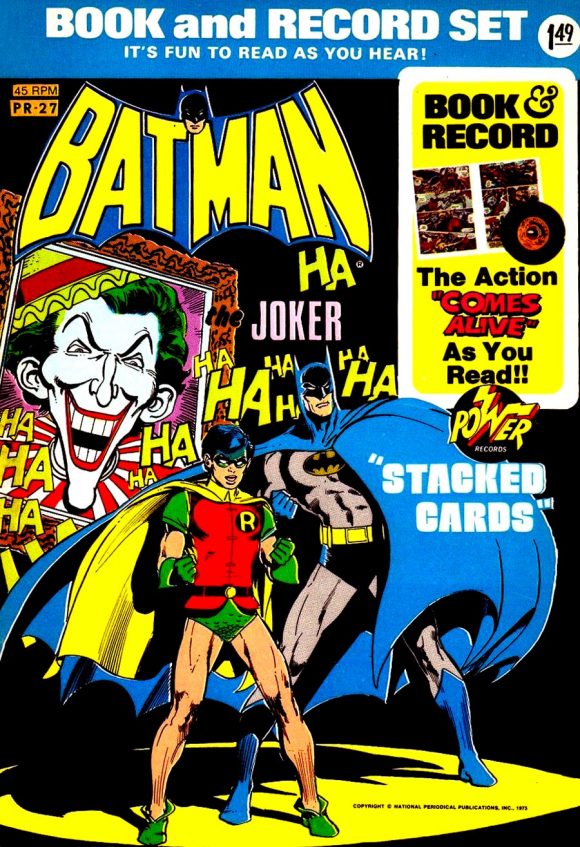 The story opens with Commissioner Gordon and Inspector Mulligan (Chief O’Hara’s equally ethnic replacement, presumably) alerting Batman and Robin that the Joker is on the loose, and it’s here we get our first bit of strangeness: On the way to investigate the crime, Robin muses aloud that maybe the Joker should be forced to get a frontal lobotomy, because, as he sees it, the Joker is “a menace to our society.”

The Joker’s scheme is fairly simple: He wants to steal a valuable Picasso, titled (of course) “The Clowns.” Batman and Robin meet up with the art museum’s curator, the fey Huntington Waterbury. Not only is the painting gone (replaced by a copy), but one of the museum’s guards is the Harlequin of Hate’s latest victim — found dead with a rictus grin on his face. Waterbury comments that he wasn’t too many years from his retirement pension. 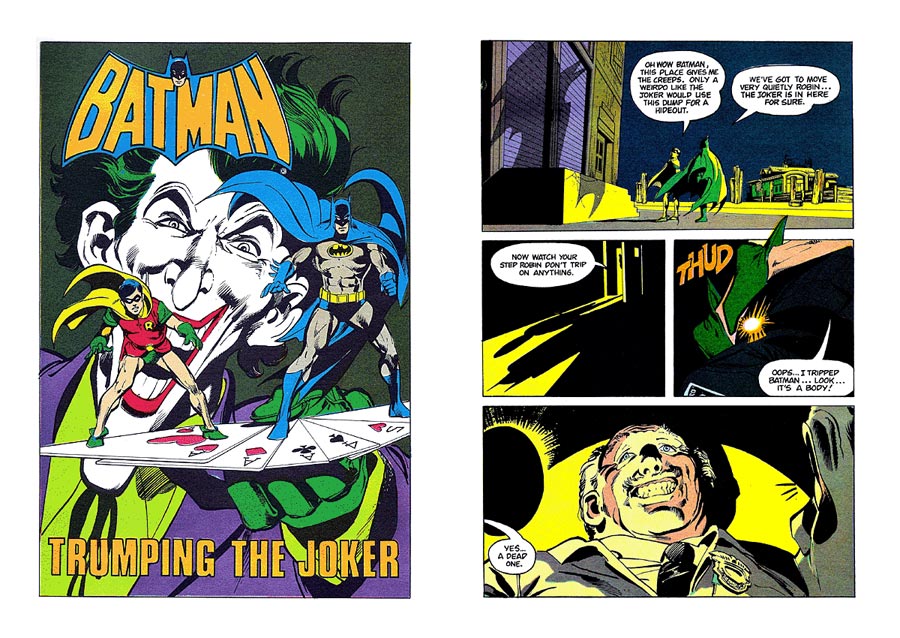 The chase continues to (of course) an abandoned warehouse, where Robin trips over a dead body — remember, this is supposedly a children’s record — another Joker victim. Batman and the Joker exchange a few blows, leading to the latter setting fire to the place to create a diversion so he can escape. He then jumps into the Gotham River, but it’s low ride, leaving the Joker stuck in the mud, a comical denouement fitting for the Cesar Romero iteration of the character.

Batman risks life and limb to go back into the crumbling, burning warehouse to retrieve the Picasso, and emerges in a literal blaze of glory. The Joker is carted back to the revolving door that is Arkham Asylum, but promises to strike again.

On the ride home, Batman surmises that, well, yeah, maybe the Joker should get a lobotomy, because “society would reap a great benefit.” We get some triumphant music and it’s thanks for listening, kids! 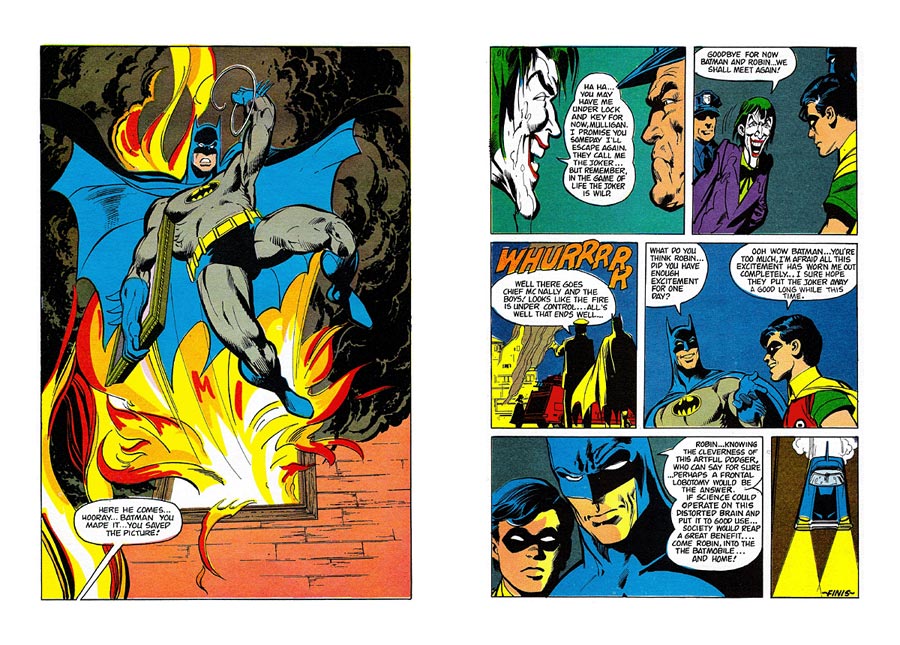 Stacked Cards has everything a Power Records fan loves about these odd little vinyl excursions: superb vocal performances (most of which went uncredited), moody music cues, evocative sound effects, beautiful artwork to gaze at while you listened, plus a healthy dollop of sheer 1970s weirdness.

Why anyone at Peter Pan Records (who produced the “Power” branded sets) thought it made sense to throw in not one, but two conversations about forced medical procedures on behalf of “society,” I don’t know, but I thank them for it.

Even though the Joker was, and always will be, Batman’s Number One foe, as I mentioned above this was his only appearance during the Caped Crusader’s run as a Power Records headliner. The company was very democratic with its choice of Bat-villains: the Riddler, Catwoman, the Scarecrow, Man-Bat and Gorilla Grodd (?!?) all got their moment in the spotlight, but just one story apiece.

Peter Pan did see fit to reissue Stacked Cards in the early 1980s when it put some of its content onto cassettes, subbing out the moody Neal Adams piece for some classic stock by Jose Luis Garcia-Lopez (Praise Be His Name). While nothing will beat Adams’ original cover, you can’t go wrong with JLGL, either. 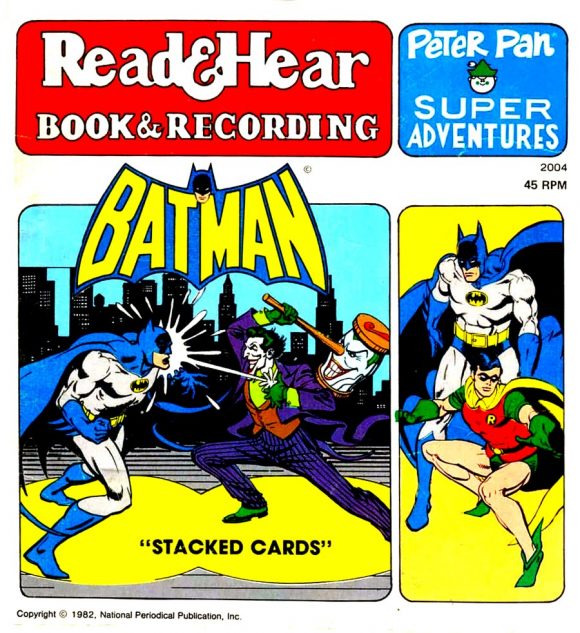 No one seems to know who actually owns the rights to the Power Records material now, so they can only be found in their original, out-of-print formats (and YouTube, of course). Unbelievably, they’ve never been reissued on CD or on iTunes, which is a real shame, because in the 1970s, Power Records was to audio adventures what Mego was to toys: an unbeatable brand that featured all your favorite characters, brought to life in an exciting new way.

Heck, go grab your Mego Batman and Robin and they can give your Joker doll a frontal lobotomy over at the Planet of the Apes Village playset (sold separately)!