The GREG RUCKA Interviews: STAR WARS and Beyond

In the finale of THE GREG RUCKA INTERVIEWS: Galaxies far, far away … and very, very close.

This is the third and final installment of our Greg Rucka interviews from New York Comic Con 2015.  In the first two parts, we ate breakfast with Greg before the show opened on Friday, ruminating about his career as a novelist and his Image titles Lazarus and Black Magick. 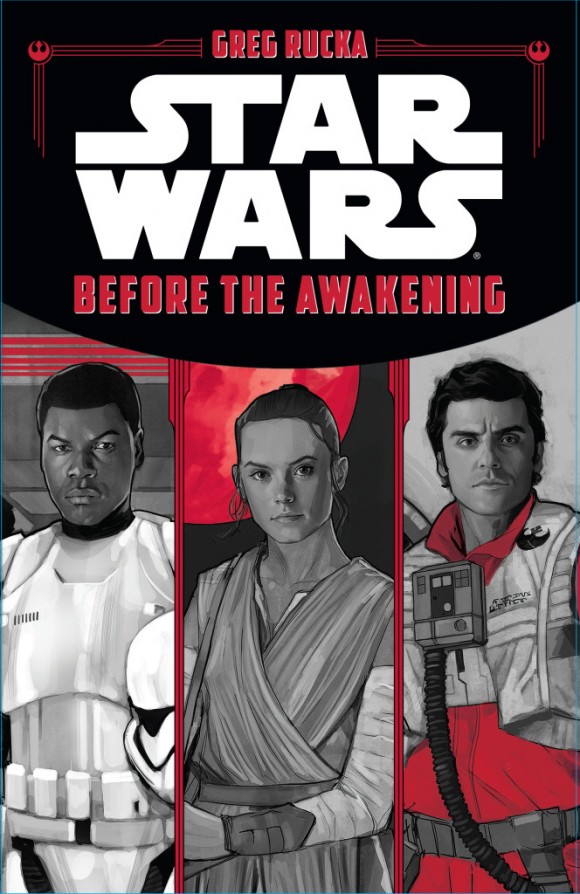 The real reason that Greg was in New York in early October wasn’t to promote his Image books or to talk about his novels, or the multitude of other things that he’s writing for Oni Press or Dark Horse, but rather his involvement with Marvel’s Star Wars franchise, the multi-media endeavor that has worked to create a broad and seamless world between the cinematic, literary and comic ventures that it is currently putting out. Greg is an unabashed Star Wars fan, in the truest sense of the word “fan,” i.e., fanatic. He gets giddy at just the mention of the name “Han Solo,” and the measured speech turns to exclamations of glee when he talks Star Wars and the miracle of his involvement in the franchise.

So after wrapping up breakfast, Greg and I went over to the show and spent time wandering the floor, exploring The Block and the rest of the southern expanse of the Javits Center. Greg looked for gifts for his two teenage children and wife, writer Jen Van Meter — much of which unsurprisingly focused on Star Wars paraphernalia (Jen did not get the Chewbacca robe or Boba Fett hoodie, though I pushed heartily for both) — and chatted about his work on Star Wars titles such as Smuggler’s Run and the upcoming Before the Awakening.

G.D.: Do you have any panels today?

Greg: No panels today.  Only signings. I have Dark Horse, Oni, and Image today. Tomorrow I have a Star Wars panel, which is the whole reason I’m here. I was not planning on coming.

G.D.: What’s going on with The Veil from Dark Horse?

Greg: There is intent to do more. I don’t know when. There is a lot of flux right now, and there is a lot fighting for my attention. So this signing is actually for the Dragon Age: Mage Killer comic.

G.D.: Did you play Dragon Age?

Greg:  Yeah. And I know some of the Bioware guys. Pat Weekes, head writer of the Dragon Age franchise is a friend and a very talented writer. They are some really smart people.

At this point, we walk into The Block, which is a series of small booths wedged together with narrow aisles and a critical mass of people. The Block, riddled with Brooklyn artists and their wares, is replete with idiosyncratic items and graffiti-style posters and t-shirts and just about anything else that an “urban” scrawl or neon glow can be put on.

G.D.:  Is there any particular direction you’re going?

G.D.:  Do you listen to the same music as your kids?

G.D.:  I had the moment a few years ago where I went to the reunion show of one of my favorite bands growing up, and said, “Holy Shit, I’m old.”

Greg:  Age has caught us.

We push through the aisles until we reach Booth 110 which houses Mishka NYC, a Brooklyn-based clothing company, and, of particular interest to Greg, the work of Nick Gazin who is an artist and writes for Vice and plainly is very cool.  Of the Gazin artifacts on sale, Greg is immediately drawn to the Teenage Pikachu shirt, a reimagining of Pokemon’s Pikachu as a punk/hipster delinquent, replete with tattoos, cigarette and beer. Greg laughs at the picture, wondering if he’ll be let back in the house if he buys this for his son, but ultimately lays out the $30+ for the t-shirt.  We then turn and push our way back through the floor. 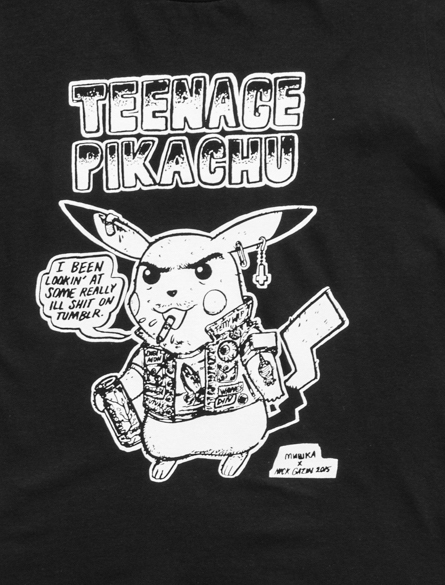 G.D.:  So you went with Teenage Pikachu?

Greg: Yes. He gets teenage Pikachu, hopefully he’ll be happy with it. I won’t be let back into the house.  Now, of course, I have to find something for my daughter, or else she’ll be like, “What about me?”

Greg:  No.  No, that isn’t her thing.  What she’d really like is for me to bring her back to New York so we can see another show. Last time I did this Con, I brought her out. She and I went to see Matilda and Annie.  That is what she really wants. He’s the dancer, she’s the performer.

Greg:  Jen is a writer. She writes Dr. Mirage, she’s got New Hope of Savages coming out from Oni Press in a month, after Hopeless Savages: Break, which I think is volume 4 or 5.

Greg:  I guess at this point I have to acknowledge that we sort of polluted that gene pool and there’s no escaping it.

G.D.:  What’s going to happen when your so goes into finance?

Greg: This thing is so fucking cute. 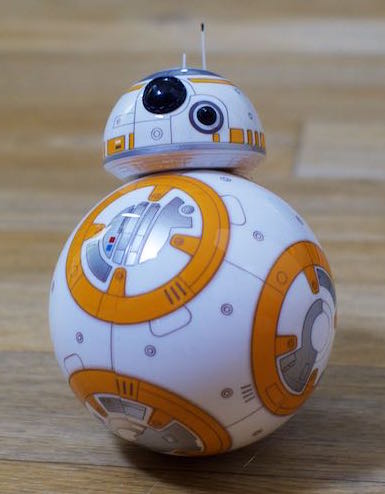 The “so fucking cute” Sphere BB-8

We are walking past a display where a woman is demo-ing a small remote-controlled droid that is about 7″ inches tall, zooming around on the floor past the feet of attendees. John Williams’ score from the opening credits of Star Wars roars in the background.

Greg: This is the BB-8 Sphero.  It’s remote controlled.  You can do it through your phone.  It’s really adorable — shockingly cute.

G.D.:  Perfect for your daughter.

Greg:  Yeah, well, we already have one. Look dude, I’m writing Star Wars.  Of course I have one.

Greg:  It is surreal as all get out, man.

Greg:  Oh yeah. Fuck yeah. Oh my god, yeah. I’ve said to others that there is an element –a lot of people in comics, comics are their religion. Star Wars is my religion, it is the religion I grew up on. That was the mythology of my youth. As much as I love comics, it’s not Star Wars, man. I speak fluent Star Wars.

So, to have been invited in to play in that sand box too, having been given a job, having been told, write stuff that Han Solo says, it’s like, “Are you fucking kidding me?” We did an audio version of Smuggler’s Run, and the guy who did the reading, my bad guy in the book — I was not delighted how he did her voice. But his Harrison Ford — dead on. Dead on!  So, you’re reading this dialogue, and it is — I’m listening to it and it sounds like Harrison Ford saying it, and I’m like, “My God!” And it sounds right. You hear it, and you’re like, it sounds right.

As if on cue, we turn the corner and come across a vendor selling Star Wars leisure wear.  Greg mentions that his wife’s birthday is coming up.

Greg:  Finding her something awesome would be good.

We spend the next five minutes perusing the stand.  There are all manner of Star Wars paraphernalia — t-shirts, hoodies, robes, belts, faux light sabers, etc., all decorated with iconic elements or symbols from the movies.  Greg is drawn to a reversible Boba Fett hoodie, while I’m partial to the Chewbacca robe.  We each make a mental note to come back later. 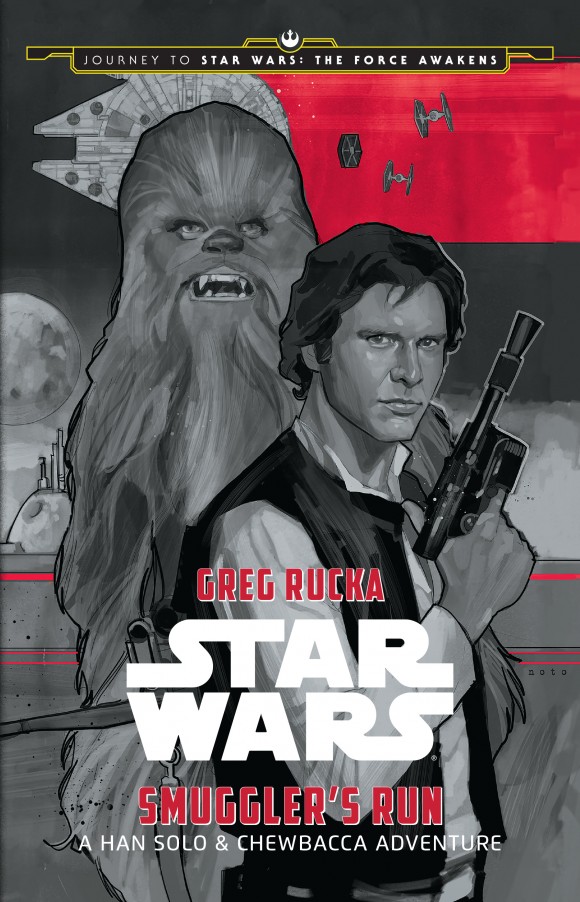 G.D.:  How did you end up getting the Star Wars gig?

Greg:  The guy who now is basically in charge of the LucasFilms Publishing Initiative is Michael Siglain, who used to be an editor of mine at DC, and then went to Disney, and then got promoted up to this. And he called me just as my father was on the way out, and said, “This may be a bad time, but I have this middle-reader Han Solo book I need written and you are the guy I thought of.” And I was like, “Oh my God!” So, I was like, “Absolutely.” I wrote that thing [Smuggler’s Run] in about 5 days. That was brief writing. I sat down and I banged that son of a bitch out, and it’s good, which is surprising, I guess, because most of the time when you shoot something out like that, it suffers for it. But this worked.

And that led to the second one, the book that’s coming out  before the movie [Star Wars: The Force Awakens].  It’s another middle-reader called Before the Awakening.

Greg:  No. Basically, there are three novellas — or three long short-stories. One about Finn, one about Rey, and one about Poe. And that’s kind of cool because basically the conceit is, “What’s going on with those characters before you get to meet them in the movie?” And, to do that, they had to bring me in and let me go back stage to some extent.

Greg:  I read the script and I saw a lot of the production stuff. They have so much security around it that they’re very careful about the type of information that they are willing to share and not. They were fairly forthcoming for this. God knows what may have changed between what they showed me and what’s going to be released, because I know some of it is still in flux and they are fine-tuning it at every turn. But, that said, it’s pretty damn awesome.

G.D:  Have you had a chance to meet Harrison Ford in this process?

Greg:  No, no. I haven’t met any of them, and I doubt I will. I cannot imagine anything I am doing is on that level.

G.D.:  I think it’s critical that you to interview Harrison Ford for this.  You should let J.J. Abrams know that.

Greg:  I’ll tell you, there was a moment when I was writing these manuscripts, and I realized, they’re being read by Kathleen Kennedy, by J.J. Abrams.  They have to be approved by them.  My understanding is that if it in any way touches on Episode VII, J.J. is monitoring it.

G.D.: This is a multi-media event.  Everything is part of the same canon.

G.D.: Are there any books you’re reading write now that you’re excited about?

I don’t actually read a lot of fiction. I’ve become a large non-fiction reader, mostly because I hit that point where I became a little paranoid about what may or may not have been sort of — you read too much fiction, and you can’t tell when I’m invading, what I’m cribbing and what I’m not.