(Missed the first two? Shame on you! Well, you can get caught up with RICK GEARY’S SPIDER-MAN here and the SPIDER-MAN from EARTH-REVLON here … )

Marvel’s SPIDER-VERSE event is finally here, featuring every web-slinger ever created teaming up with and facing off against each other, because there is statistically no such thing as Too Much Spider-Man. (This statement may not be valid with the 1990s Spider-Clone Saga.) 13th Dimension therefore humbly suggests to Marvel a few Spider-Men they might have forgotten to include in Spider-Verse, from ads and tie-ins to children’s books and seldom-seen one-off comics.

Yes, it’s another entry in SPIDEY’S SCREWIEST SPIDER-VERSES, this time focusing on a Spider-Man we bet you didn’t know existed: National Action Council for Minorities in Engineering-Spider-Man! 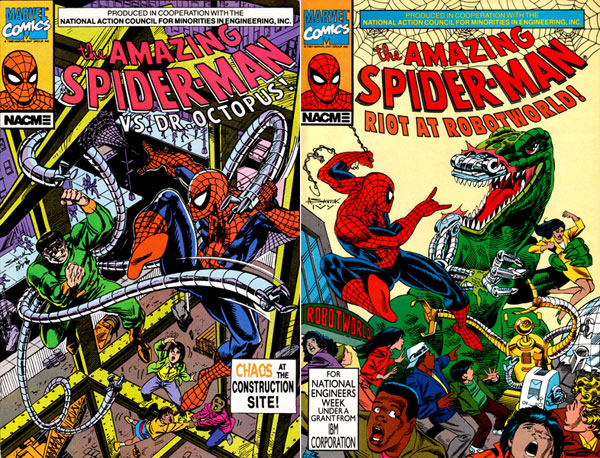 PSA (public service announcement) comics like these two have been around for decades, educating their readers and promoting everything from anti-Communism to anti-smoking. Marvel’s several PSA comics include Captain America Meets the Asthma Monster, Jubilee vs. Peer Pressure, Iron Man and the American Welding Society, Namorita teaming up with the Miami-Dade Police Department to battle drug pushers and commercial polluters, and several dozen Spider-Man issues, all well-intentioned but definitely out of continuity. 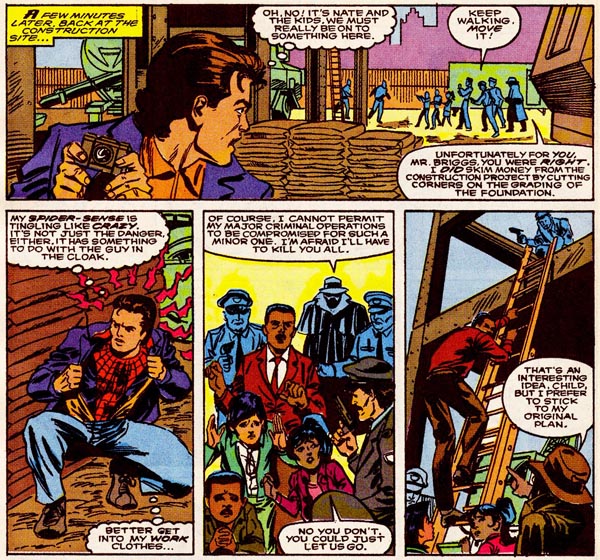 The first of two Spider-Man giveaway comics promoting the National Action Council for Minorities in Engineering (NACME) pits Spidey against crooked constructors using cheap, shoddy material to build a skyscraper. A crew of plucky high school kids studying engineering uncover the plot, but it’s up to Spider-Man to battle the baddies and uncover the mastermind… 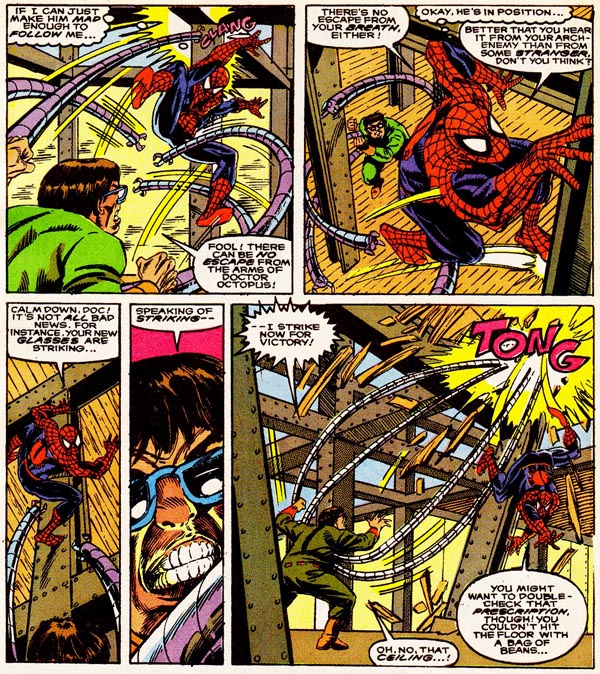 …oh, it’s just Doctor Octopus again. Poor old Otto Octavius. Why, at this rate, he’ll never star in a Marvel comic book of his own as some sort of superior hero!

The adventure wraps up with an ’80s-style tag re-convincing kids that hey, engineering is not only a viable career choice, but it’s cool, too! Seriously, kids, by all means, study to become an engineer and don’t goof off throughout your college years as a freelance photographer. 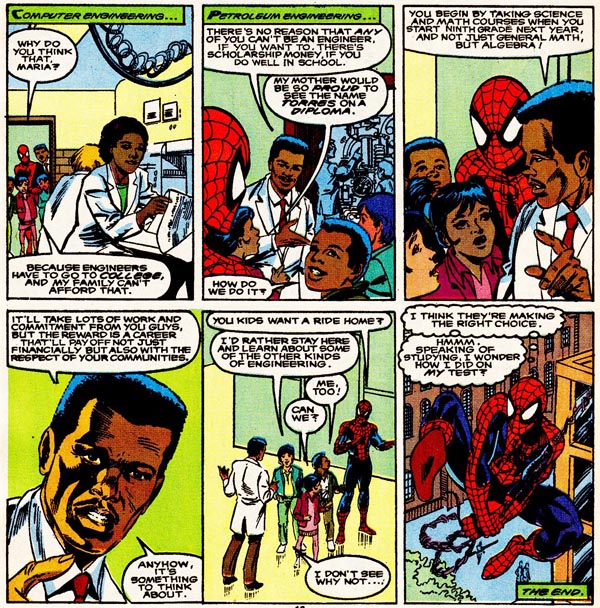 NACME‘s second Spider-Man PSA plants its feet even further away from the reality of minority teenagers studying engineering to take Peter Parker to Robotworld, a … well, it’s a world full of robots, as we’ll soon see. 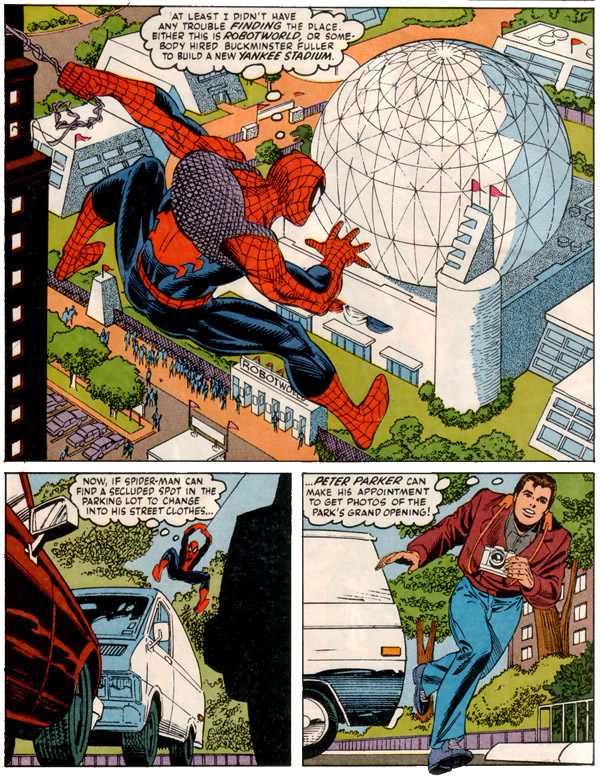 Meet Ana Lopez, project head of Robotworld! She’s a good role model for kids and a natural champion of an engineering career. You can tell this is a public-service, non-continuity Spidey story, however, because Peter Parker doesn’t flirt shamelessly with her. In the regular Marvel Universe, he’d be breaking dates with her to fight the Rhino in the next 10 issues. 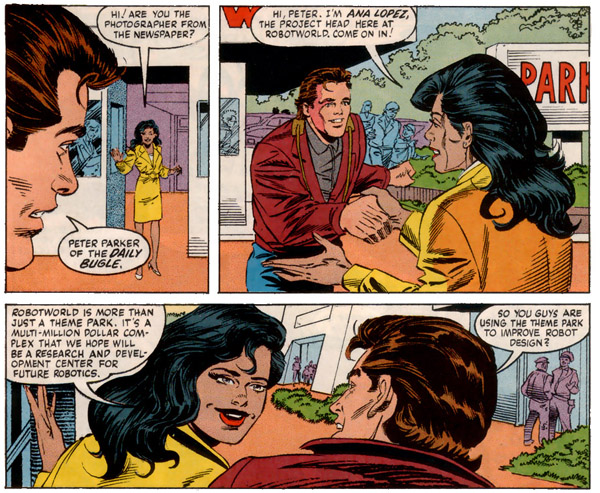 Welcome to Robotworld — where nothing can possibly go worng! 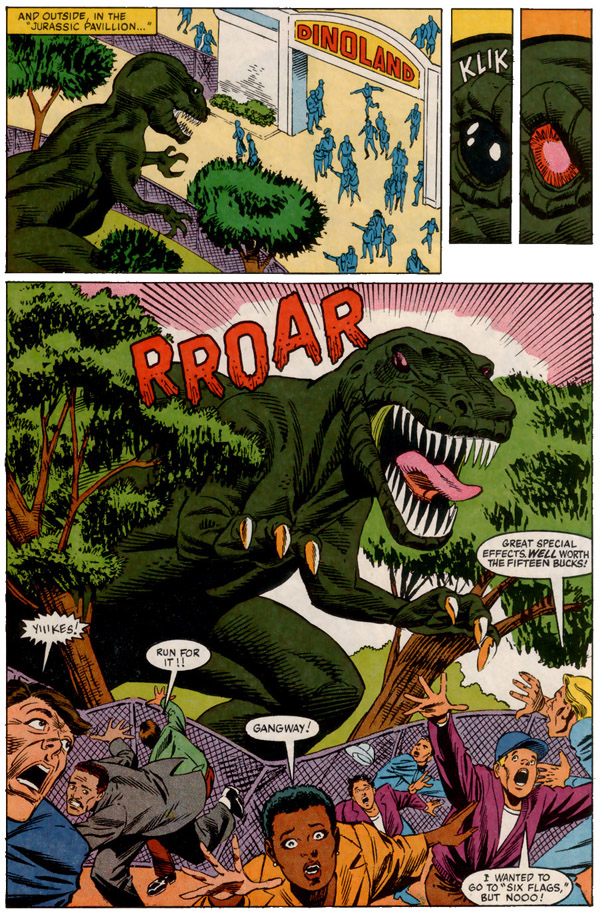 Caught in the chaos are Ana and a plucky group of high school kids studying engineering. By this point they really deserve their own entry in the Official Handbook of the Marvel Universe, don’t they? If they were X-Men, Cyclops would have chewed out two of the three of them by now! Luckily, they can use engineering to shut down the rampaging robots and LOOK OUT KIDS IT’S ULTRON! 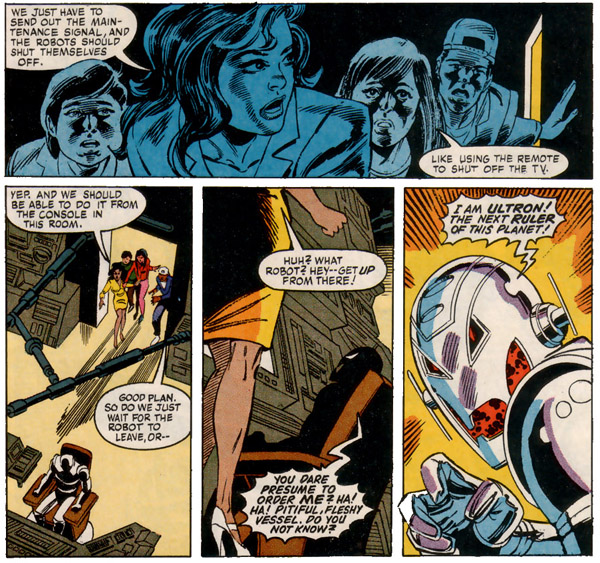 This is what engineering school prepares you for: battling one of the most ruthless killers in the Marvel Universe. Oh, and also RoboCop. And Terminator. And the robot from Lost in Space. 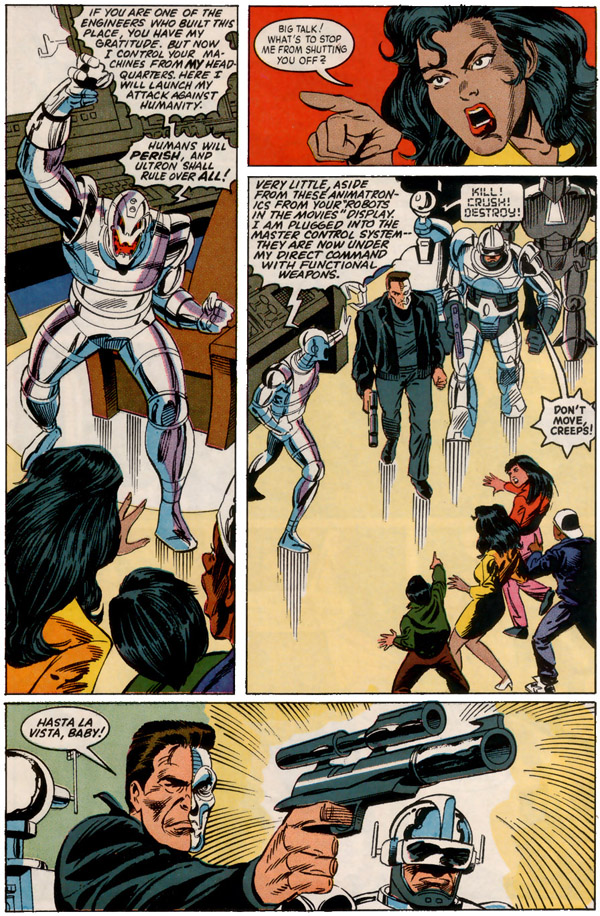 Oh yeah, almost forgot: Spider-Man’s in this comic book, too. 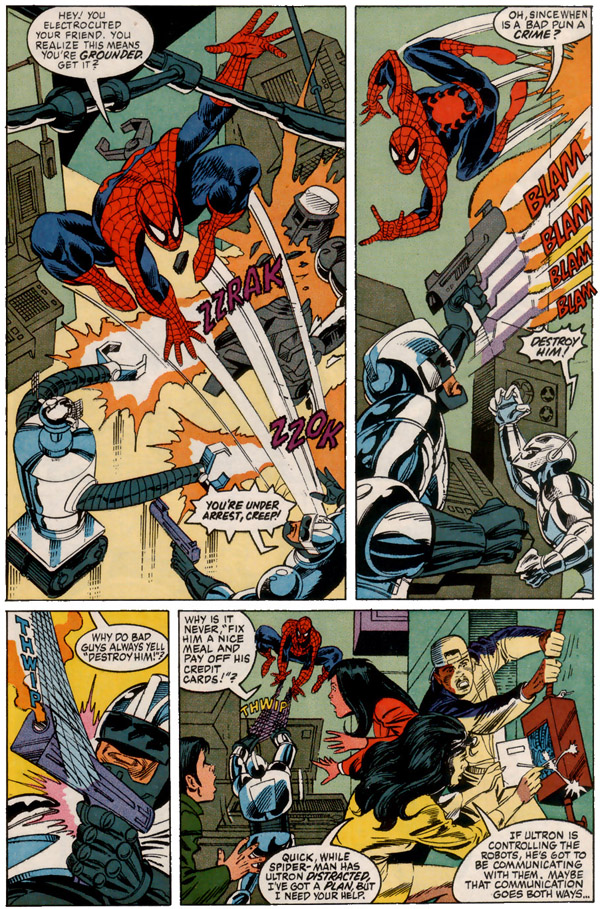 But it’s Ana and the kids who save the day … using ENGINEERING! Which in this case, is turning the knob to change a radio frequency. Yes, Ultron — the Avengers’ most deadly enemy, the killer robot who enslaved humanity in a 10-issue crossover event (plus some movie due out in 2015) is defeated by tuning into 106.7, The Lite FM!

I hear ya, Ultron. I feel the same about Celine Dion. 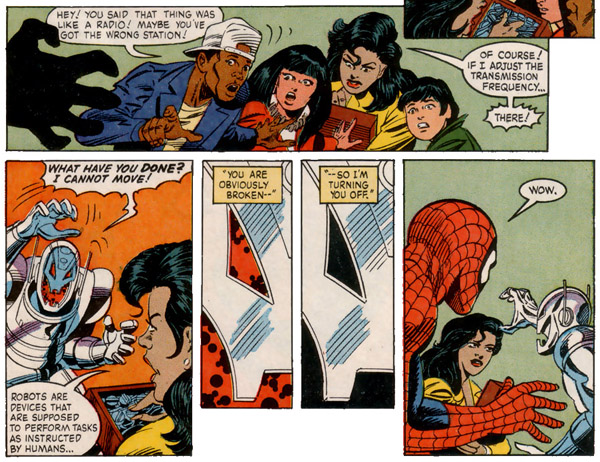 Each comic ends with an info-stuffed “You Can Be An Engineer!” page hosted by the engineering-knowledgeable adult introduced in the comic. To its credit, it doesn’t skim over the real-world work you’ll have to master to study engineering. 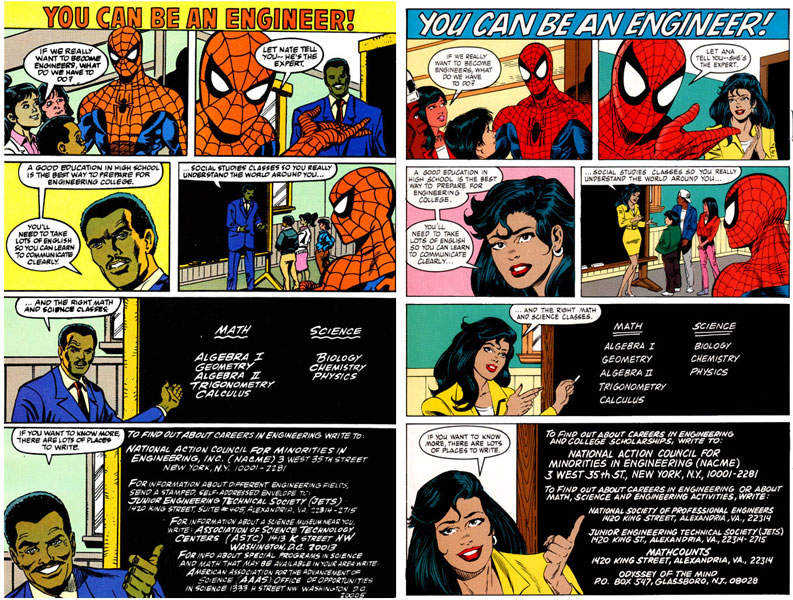 Both these stories are the very model of a public-service announcement comic book: well-intentioned but incredibly cursory. In their attempt to be interesting they pull their audience out of the reality of a serious topic and treat it as a standard Marvel slugfest. On the plus side, they actively feature role-model adults and high school kids and are genuinely compelling and encouraging in presenting their points.

It’s a good story for a good cause.