But a secondary Bat-character is also having a big birthday this year: Man-Bat debuted in Detective Comics #400 — on April 30, 1970, according to the Grand Comics Database. 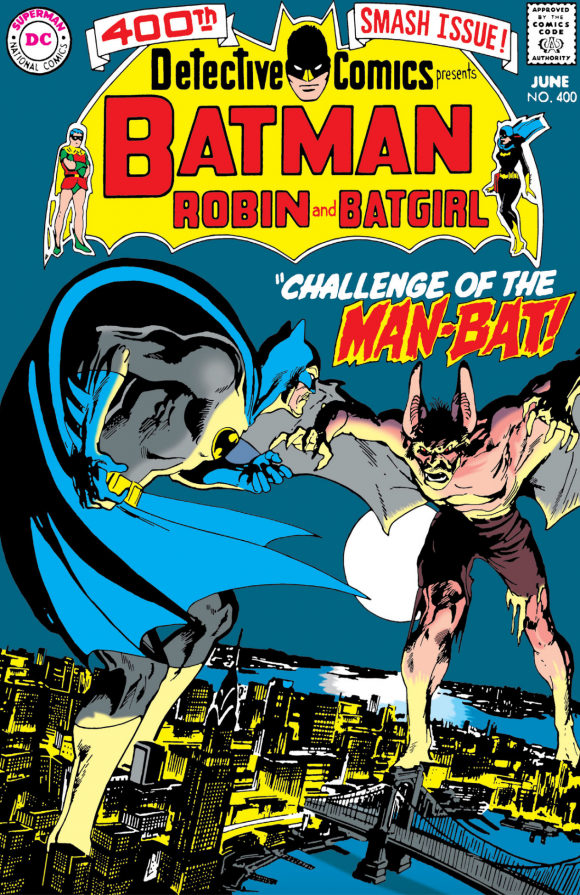 So, that’s 50 big ones for sometimes-hero/sometimes-villain Kirk Langstrom.

Man-Bat was unquestionably at his most popular in the 1970s, to the point that he got a starring role in the kid-friendly Power Records line-up of adventures — and 13th Dimension contributors Rob Kelly and Chris Franklin discuss Robin Meets Man-Bat on their latest Power Records Podcast. (Click here to listen — you’ll be glad you did!)

But Rob is taking it a step further with this INSIDE LOOK at the book-and-record set that adapted Man-Bat’s earliest adventures. 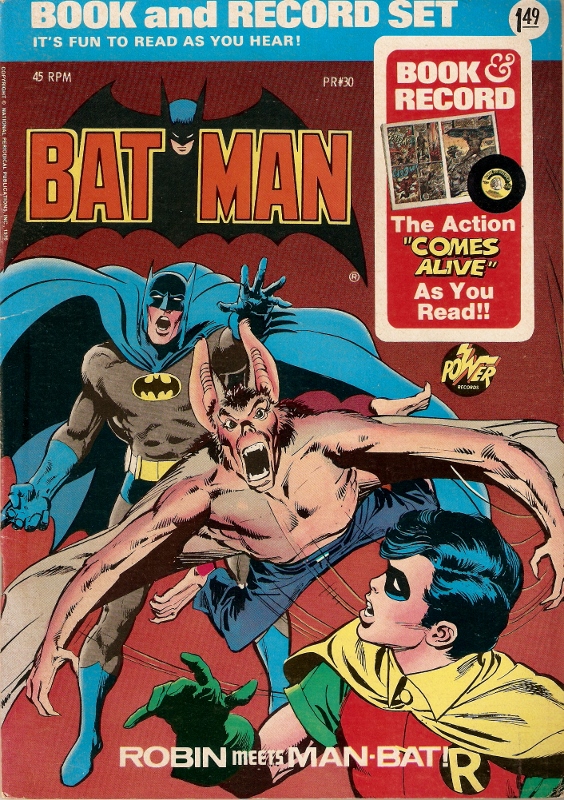 One of the most moodily evocative audio adventures ever produced under Peter Pan’s Power Records label, 1976’s Robin Meets Man-Bat is a hodge-podge of three DC Comics stories featuring everyone’s favorite half-man, half-bat hybrid — Detective Comics #400, 402 and 407, which were written by Frank Robbins and featured art by the classic team of Neal Adams and Dick Giordano.

A deep-voiced narrator sets the stage, explaining that a bank vault robbery in the dead of night is taking place. But what the erstwhile crooks don’t know is that waiting for them inside the vault are — Batman and Robin! The Dynamic Duo think this will be a standard evening (for them), until they realize that one of the men is carrying a sonic disruptor, and the piercing sound it emits causes our heroes to drop to the floor in agony.

Just then, a mysterious creature appears from out of nowhere, releasing its own horrific, high-pitched scream. The beast makes quick work of the armed robbers, while Batman and Robin simply watch from the sidelines. Robin (the boy) wonders whom—what—this thing is, and is surprised to learn that Batman seems to know it, referring to it as “Man-Bat.” 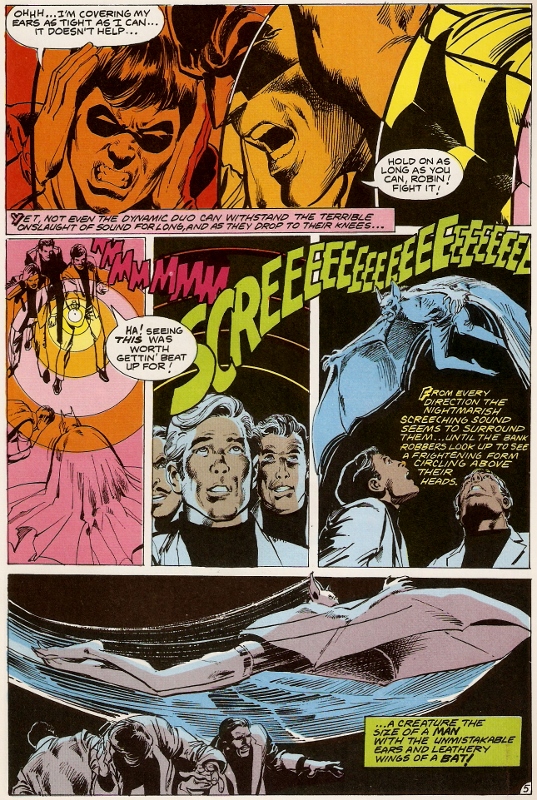 In a flashback, we see that nocturnal mammal expert Dr. Kirk Langstrom, an ardent admirer of Batman, developed an experimental formula that he thought would help the Darknight Detective on his mission against crime. But he decided to try it on himself first (bad move), horrified to see that the serum turned him into a human-sized bat!

Stumbling into helping Batman take out a group of bad guys called the Blackout Gang, Man-Bat took off into the night. Eventually Batman tracked Langstrom down and administered an antidote, turning Man-Bat back to normal. For a while, it seemed as though Langstrom was back to a regular life after getting engaged to a woman named Francine. But Batman sighs, since it appears Langstrom has once again transformed into Man-Bat. 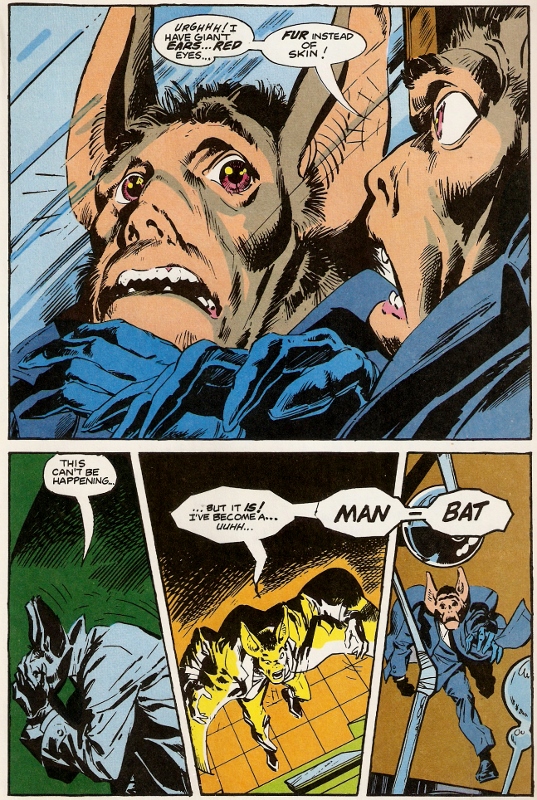 Suddenly, the creature returns, accusing Batman of “taking my Man-Bat away.” Robin is confused, but Batman figures out that this isn’t Man-Bat at all! After Robin’s sneezing powder bomb forces the creature to drop the Dark Knight Detective from it claws, a second Man-Bat appears, appearing to attack the first! A well-aimed Batarang brings both beings crashing to the ground, and Robin notices one of them is holding some hypodermic needles. Batman immediately knows what to do, administering the serum to both creatures. In a few moments, the “Men”-Bat are revealed as Kirk Langstrom — and his wife, Francine!

Turns out that Francine, worried about Kirk when he didn’t return from a research trip, accidentally drank some of his serum, turning her into She-Bat and driving her mad. She then took off, hell bent on getting revenge on Batman, mistakenly blaming him for her husband’s disappearance. Once Langstrom discovered this, he decided the only way to stop her was as Man-Bat, leading him to the attempted bank vault robbery and running into Batman and Robin. Now back to normal, Kirk and Francine apologize to Batman, who generously forgives them. It’s then Batman’s turn to beg for forgiveness — this time to Robin, for not yet introducing the Boy Wonder to his friends. The End! 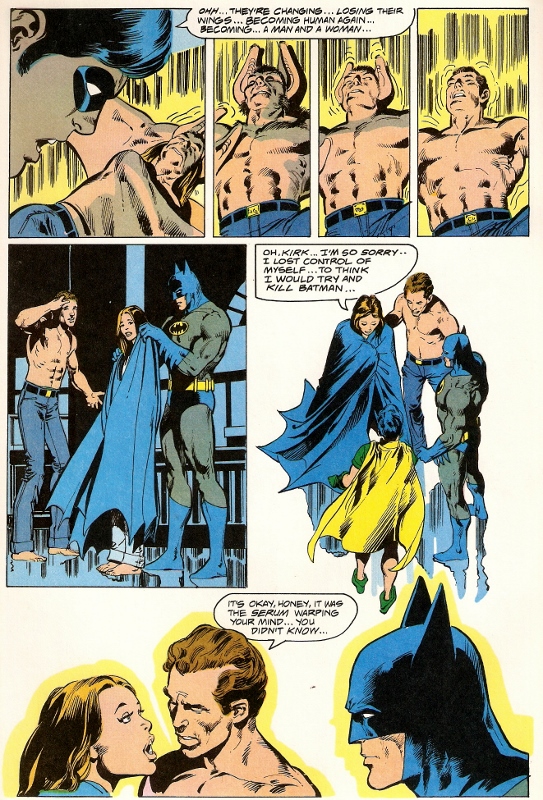 The folks at Power Records must have really loved monsters. Not only did they produce an entire line of monster-centric book-and-record sets based on Marvel properties (Tomb of Dracula, Monster of Frankenstein, Curse of the Werewolf and Man-Thing), but they had Spider-Man square off against a similarly monster-ish foe in The Mark of the Man-Wolf, (as opposed to, say, choosing a story with the Green Goblin, Dr. Octopus, or half a dozen other classic Spidey villains).

Always dancing right on the line of what could be considered a bit too intense for the small children these records were ostensibly aimed at, the crack staff of actors and sound effects people really bring Robin Meets Man-Bat to life. Despite being an amalgamation of three different stories, it hangs together pretty well, despite the awkward notion of Batman having met a life-sized man-bat hybrid creature and never thinking to mention it to his junior partner. Surely there was time to bring it up during all those trips from Wayne Manor to Commissioner Gordon’s office? 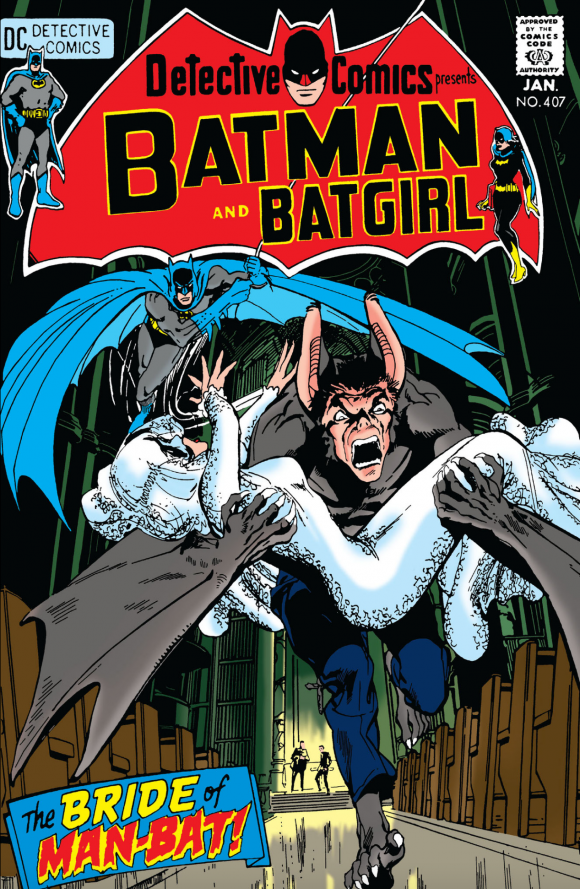 As a comic book, it’s no surprise that this thing works like gangbusters — as drawn by Adams and Giordano at the peak of their powers and including some images from Detective. Batman and Robin are as iconic-looking as they ever got, and Man-Bat is suitably horrific, but with big, soulful eyes, suggesting the tortured being within. Adams also throws in a fun, if subtle, detail, where we see Batman put his cape around Francine after she has been transformed back into a human—since, as we saw in the previous pages, when she was in bat-form she was essentially topless. Sure, Power Records could go pretty far, but not that far.

Man-Bat has never been a particularly popular character, but I think he has continued through the decades because many of the writers and artists who’ve worked on Batman comics like him, so he keeps getting a chance to flap his wings. He appears in the very first episode of the classic Batman: The Animated Series, despite being a more fanciful character than usual for Batman’s gritty, street-level world. He also got a back-up feature in Batman Family, drawn by Michael Golden and Marshall Rogers, two other masters of the comic book form. That’s a pretty good track record for any character! 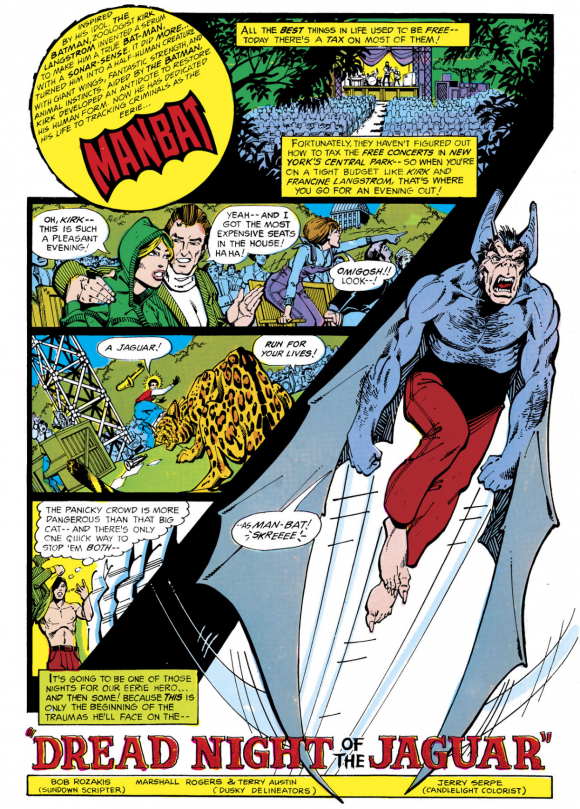 I still have not been able to learn who the actors where playing the roles in these various Power Records, but Batman and Robin are perfectly cast. Batman’s deep baritone is authoritative and powerful and eschews any of that “Bat-Whisper” silliness heard in the live action movies. Robin is youthful and light-hearted but never silly or grating, and his slight dig at Batman at the story’s end is a nice touch to go out on.

Forty-plus years on, Robin Meets Man-Bat remains one of the best of the Power Records line of Batman audio adventures. 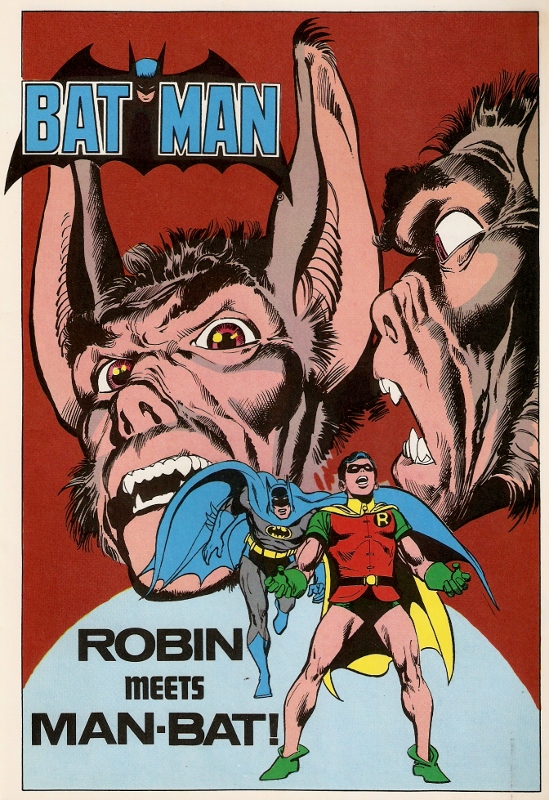