A couple of ’70s sisters are doin’ it for themselves…

I freely acknowledge that I’m not the world’s biggest fan of the Wonder Woman TV show or The Bionic Woman (or The Six Million Dollar Man, for that matter). I don’t dislike them or anything like that. I was just never into them while growing up and have never really bothered to catch up. I do watch Wonder Woman on MeTV from time to time, but that’s the extent of it. So whenever something like this comic pops up, I turn the controls to the Invisible Jet over to a trusted hand, in this case columnist Christy Blanch … — Dan 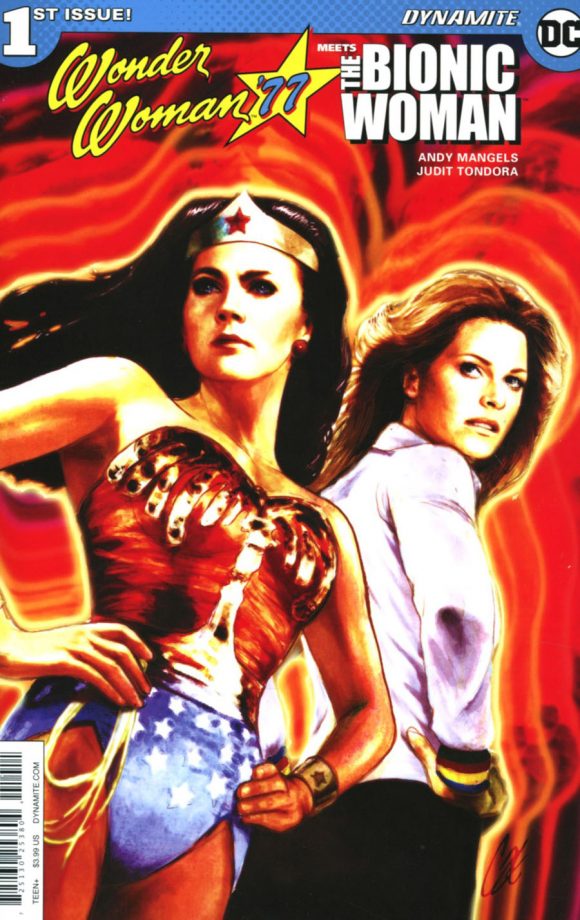 I have been looking forward to this book ever since it was announced: Two of my childhood heroes together in a comic book? Yes, please.

I wasn’t quite sure how they would handle the two women together and they did it brilliantly. How the ladies are treated by some of the men is uncomfortable, but hey, it was the ’70s and that is how it was. Sometimes that is still how it is — something that needs to change.

Andy Mangels totally got the voices right for both Jaime and Diana. And Judit Tondora’s art is great — not my favorite art style, but the expressions were terrific and brilliantly added to the storyline.

I love how Jaime knows who Diana is while those around them have no idea. It just shows how brilliant her mind is in addition to her being bionic.

But my favorite thing about this book? Best sound effect in a long time – Deeneeneenee. That took me back to watching The Bionic Woman on television as a kid. It made me smile hard enough that my cheeks hurt. All in all, I’m on board for this book and am anticipating the second issue.

Thank you Dynamite and DC for adding some joy from my childhood back into my adulthood. It allowed me to escape reality for a short time.