REVIEW: These Batman Figures Are a Bat-Triumph

Home » BATMAN'S HOT-LINE » REVIEW: These Batman Figures Are a Bat-Triumph

To wrap up GOTHAM TRIBUNE‘S Batapalooza this week, we jump in the Wayback Machine with Figures Toy Company‘s World’s Greatest Heroes Mego replicas.

Part of reading comics and collecting action figures is about chasing the dragon.

You want to recapture that feeling, that high, you had when you read that great book a year, or five, or 10 or 20 years ago. Or you buy that action figure because, yeah, it’s cool, but you really want to relive that experience from when you were a kid.

In large part, it’s an exercise in frustration. Most comics aren’t as good as the ones you remember, or at least don’t thrill you the same way, and most figures don’t give you that same childlike fulfillment. So the hunt becomes as important as the kill.

Except every once in a great while you find something so perfect that your devotion is rewarded in a way that you cannot explain to anyone who doesn’t adhere to this pagan religion.

This week, I found that perfection, in a big box from Figures Toy Company. 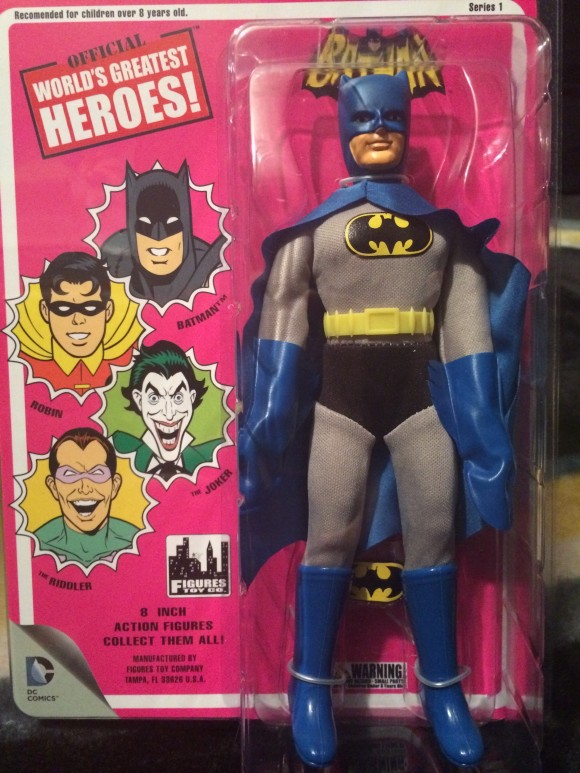 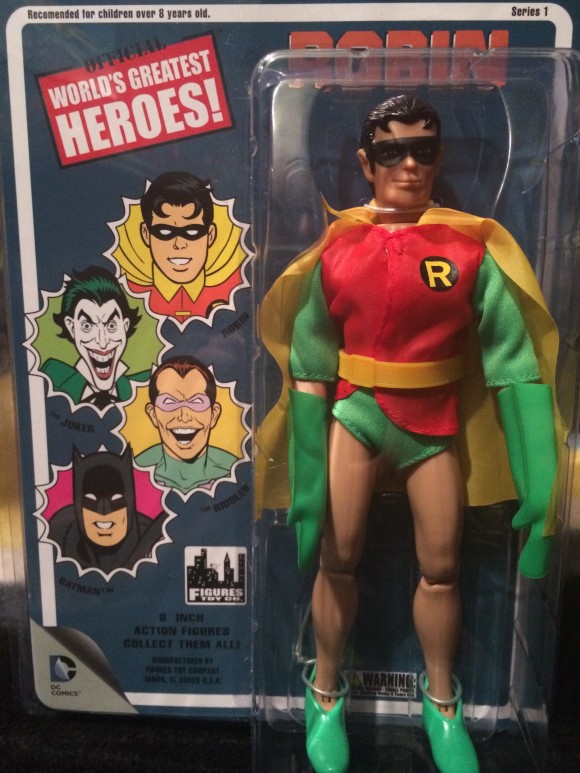 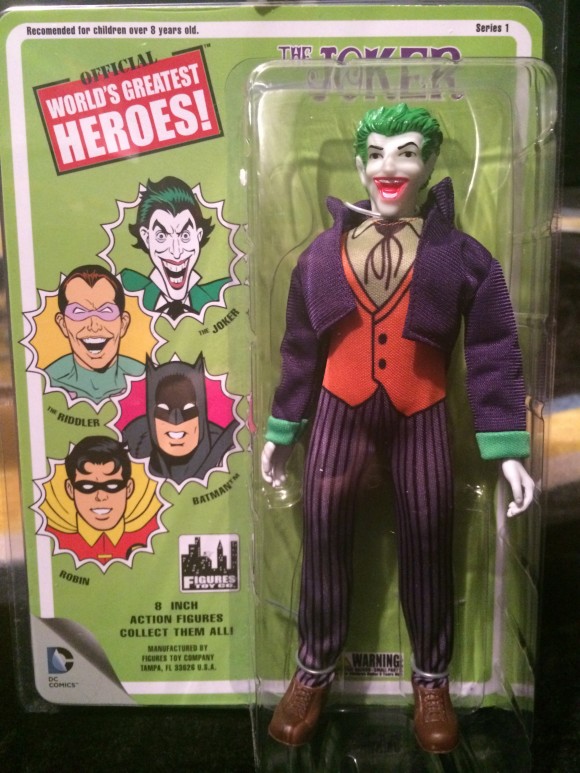 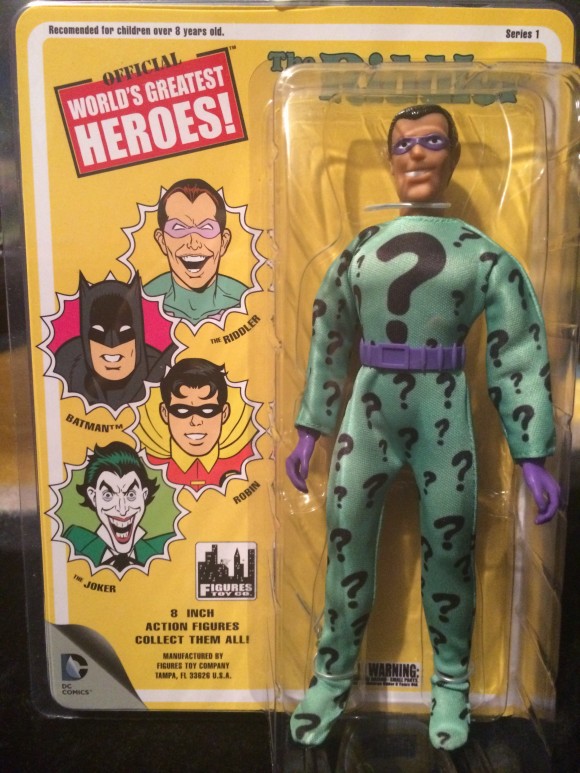 My childhood was so defined by Megos (and comics, naturally) that those action figures took on a totemic quality unsurpassed by any collectible I will ever own.

I had the entire Batman collection — Batman, Robin, Batgirl, the Joker, the Riddler, the Penguin, Catwoman — plus the Batcave, the Batmobile, the Batcycle and the Batcopter. I had guest stars like Superman, Aquaman, Green Arrow and Mr. Mxyzptlk. I even crossed the company barrier and had Spider-Man. I turned my Action Jackson into Two-Face. Even Cornelius and Dr. Zaius had a home in my shoeboxes.

When the capes wore thin, I got cloth and fashioned new ones. I learned how to rethread figures that fell apart from overuse.

I had ongoing storylines and standalone adventures. There was heroism and defeat and romance and betrayal. The world I built with those Megos was as rich as anything I was reading in the comics.

Eventually, as happens, they all went away. I repopulated with repros and the like years later. That’s a nice substitute but I never thought I’d ever be able to buy a clean, original Mego ever again.

Now, for all intents and purposes, I can.

These World’s Greatest Heroes from Figures Toy Company are so on the money that it’s extraordinary.

Packaging: Figures Toy Company went the clamshell route, which made the most sense. I’m a window box guy at heart, but you gotta get these things on the pegs if you want to sell them in stores. Best part is these are resealable so you can still display them in package and take them out at will.

Art: They went as close to the Mego design as they could, but because of licensing issues, it would seem, Figures Toy Company is using the art that companies are utilizing for Batman ’66 merchandise. I can live with it.

Details: Batman and Robin’s emblems are the same designs as the original Megos — but are screened on and hallelujah, that’s an improvement. Yes, the stickers are charming, but the screens just make the figures that much more durable. There’s even an extra one for Batman in case something should go awry. (Not Robin, though).

The sculpts: On. The. Money. These are Megos, alright. The bodies are firm and they stand without assistance. 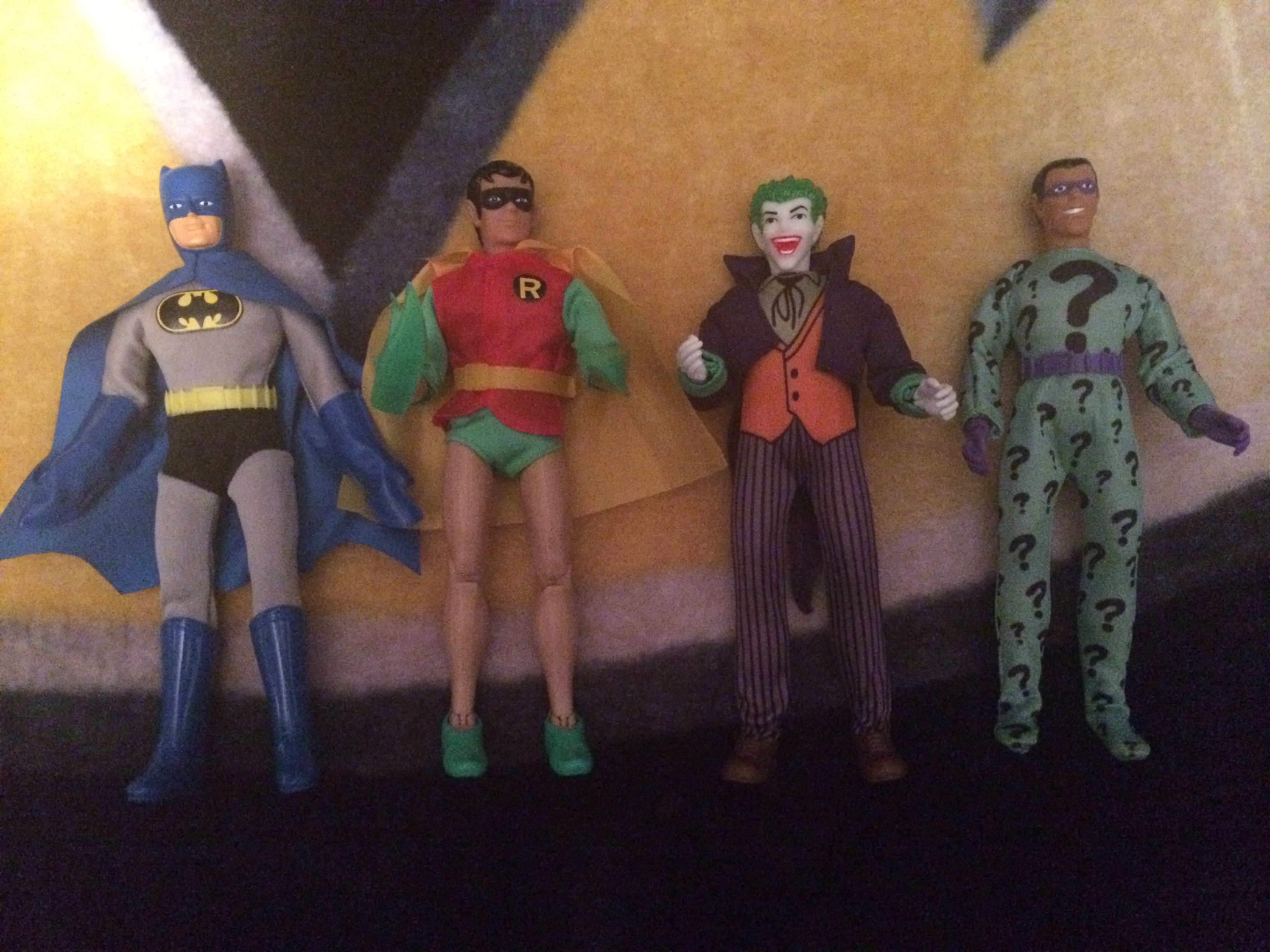 Overall: These figures are uncanny reproductions. They will brighten my shelves for years to come. And they’re only $24.95 (SRP) a pop.

Next: Wave 2, which could be out this winter, will feature Penguin and Catwoman and the Bruce Wayne and Dick Grayson figures that were originally available only via mail order. After that? Lightning strikes again with Wave 3 — and Removable Cowl Batman, Removable Mask Robin, Batgirl … and, for the first time, Alfred. Then come the slightly smaller-scale Teen Titans, which I never had. Plus, Figures has been promising the figures done in the style of the Batman ’66 show.