Hot on the heels of the company’s initial wave of Batman Mego reproductions, Figures Toy Company has put out Wave 2 — Penguin, Catwoman, Bruce Wayne and Dick Grayson. And like the first wave, these figures are outstanding replications of the Megos of yore. 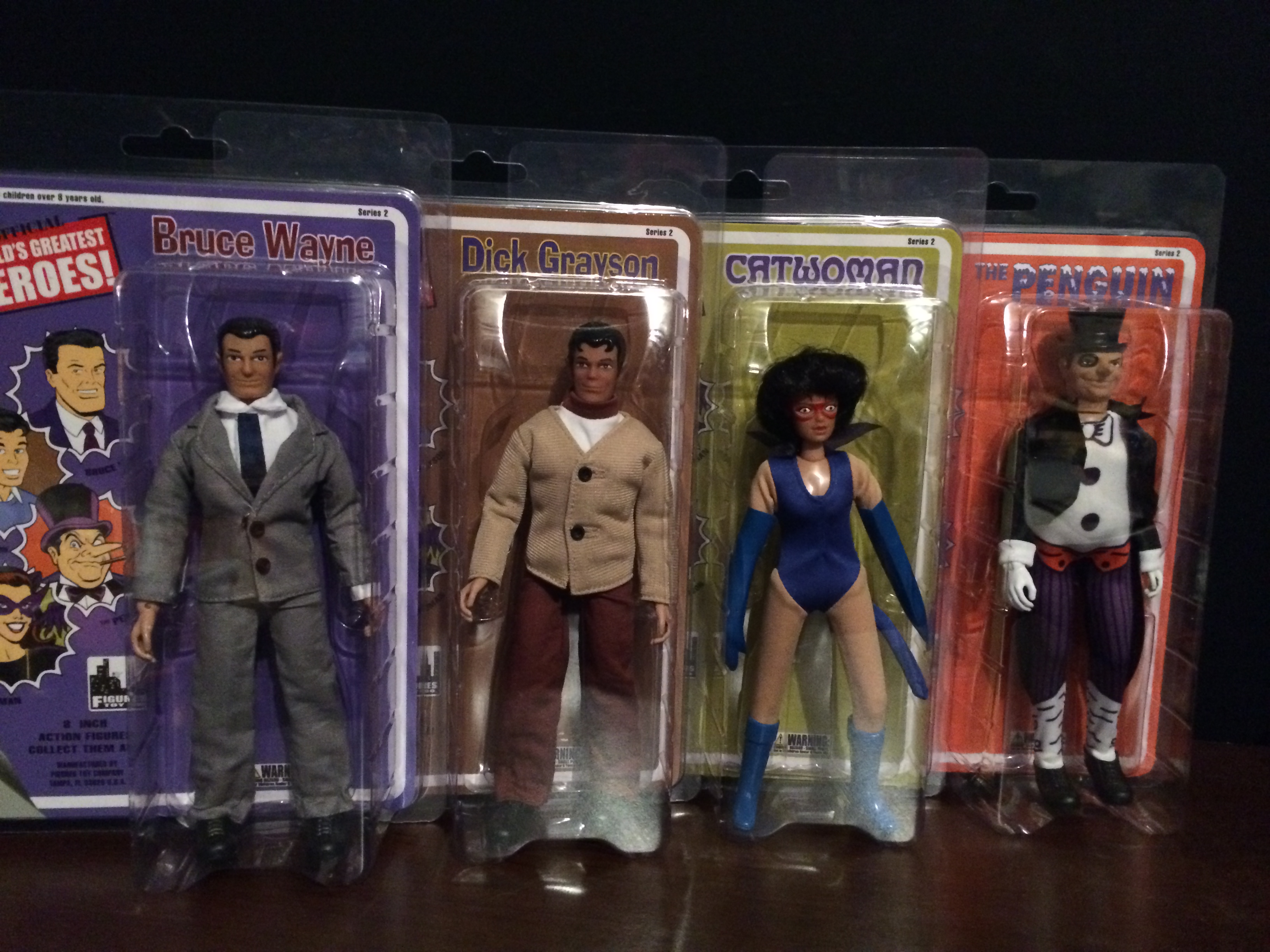 Now, unlike Wave 1, which featured Batman, Robin, the Joker and the Riddler, this wave lacks some color. This is kind of a filler wave: You get the rest of the Batman villains, including the least attractive Catwoman figure ever, plus two figures that were never released on the pegs in Bruce and Dick.

But the only issue that really matters is whether these figures live up to the originals.

The Penguin was always a bit of an odd bird in the Mego line. He has the fat body but he also has the long legs, so he’s a bit strange looking. That’s not on FTC, however. They’re just following the template.

And they follow it to a T, with the painted-on monocle, screened tuxedo and black tails. An oustanding job. 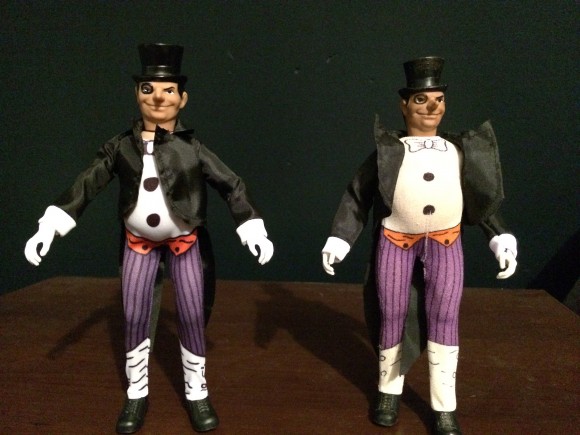 Which is which? (Hint: The one of the left is the new one. Uncanny.)

Good heavens, Mego Catwoman is ugly. But it would have been wrong for FTC to fix her. Accuracy’s the most important thing here.

The original Mego Catwoman was an accident of timing: She was designed at a time when the character was barely used in the comics and had an outfit since dubbed Pirate Catwoman. She had a fashionable bob but that never translated properly with Mego hair.

As far as the construction of the new figure goes, however, I’d say that the FTC version is a slight improvement over the original, whether by design or by accident. The face is a bit more visually appealing, and the neckline of her bodysuit seems to be a bit higher. (My Mego Catwoman would frequently pop out of her top and while that might have given Li’l Dan a thrill, it was a pain in the rear.) 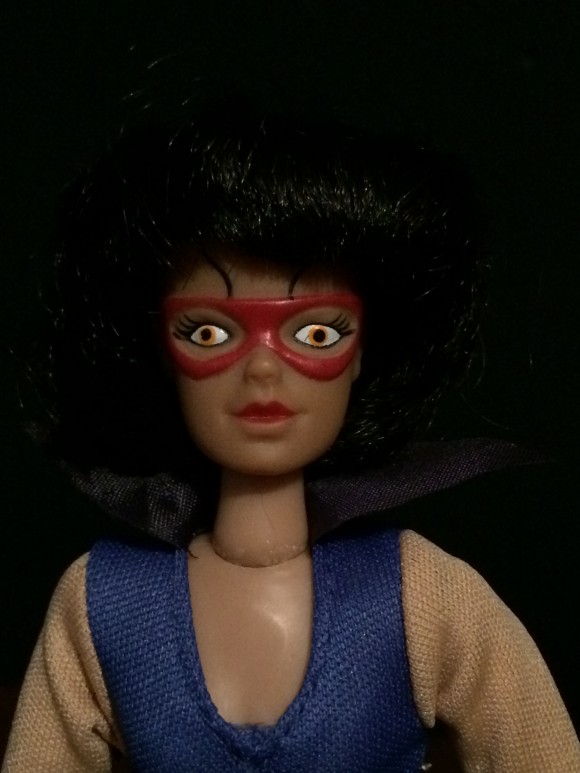 Ah, now FTC gives us the first two figures that never were. But unlike the forthcoming Alfred (which was never released in any fashion), Bruce and Dick were available by mail order — or at least their clothes were.

Bruce and Dick (and Clark Kent and Peter Parker) were available only through Montgomery Ward’s catalogue. You’d get a head and a set of clothes. (Check out the awesome Mego Museum for more info!)

FTC, instead, goes all in with Bruce and Dick figures, complete with clamshells, and so forth. The clothes themselves are reproductions of the originals. 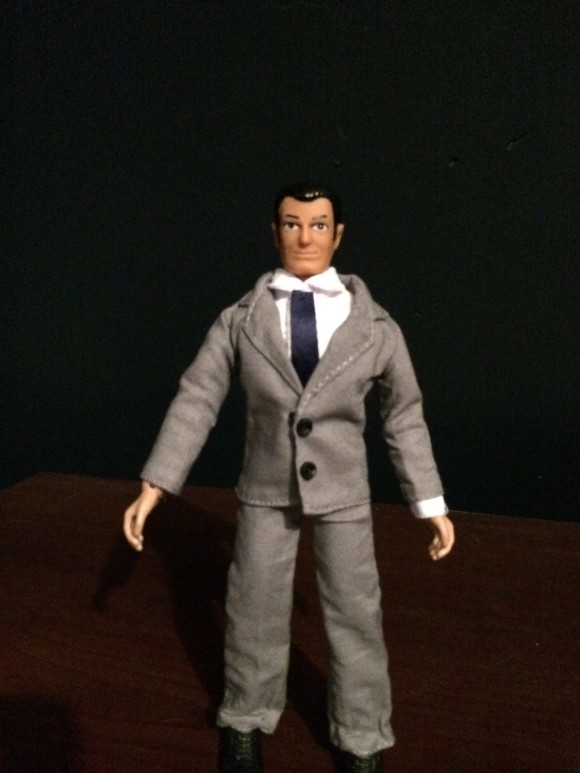 Bruce’s outfit is the better of the two — Dick looks like he’s fresh off an appearance on “The Brady Bunch” — and the clothes fit the figures fairly well. I’m a proponent of the screened clothes on, say, the Joker and the Penguin, as opposed to bulky suits for 8-inch figs. But these appear to be tailored pretty well. My only quibble is Bruce’s eyebrows, which seem short and so give him a bit of a kabuki quality. 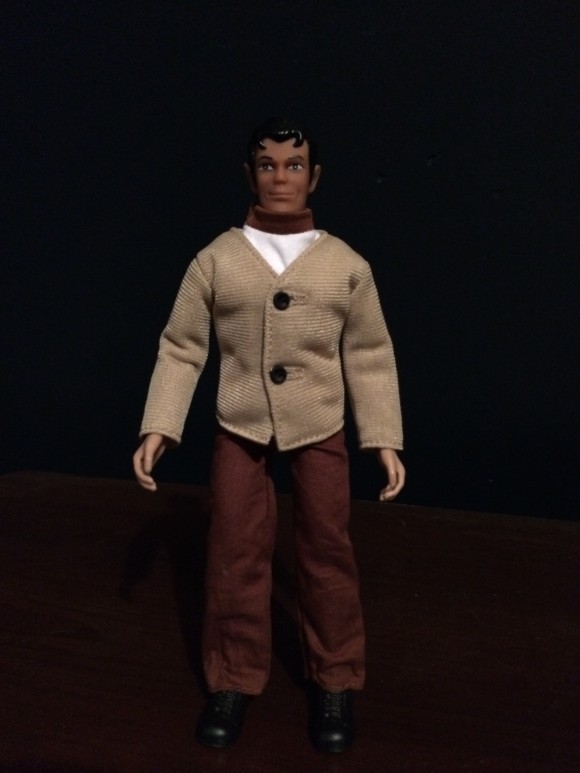 On a personal level, I’m far more eager for Wave 3 — Alfred, Batgirl (!), Removable Mask Robin (!!) and Removable Cowl Batman (!!!) — not to mention the Teen Titans and the Batman ’66 figures. But that doesn’t take away from the superb quality of the Wave 2 figures.

These are another monster hit from a company that keeps showing it knows exactly what it’s doing.