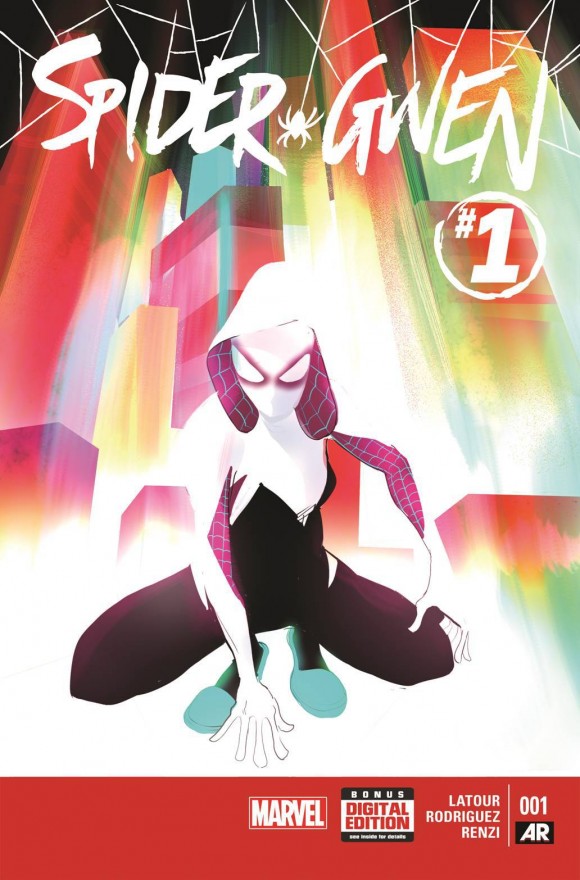 Don’t believe the haters who say the Big Two keep churning out the same ol’, same ol’. Sure there are a lot of books that hew to formula – but there are also books like Spider-Gwen #1, the Marvel book everyone is so excited about this week.

And there’s good reason for the excitement – like the much-ballyhooed Batgirl over at DC, Spider-Gwen speaks to a new generation of readers by taking a distinctly 20th century character and remaking her for the 21st. Writer Jason Latour puts you right in the middle of it all, Robbi Rodriguez‘s art is zippy, and Rico Renzi‘s colors are bold.

Of course, this is not the Gwen Stacy who died falling from the George Washington/Brooklyn Bridge (take your pick). This is an alt-universe version, where Peter’s dead but characters like the Vulture are very much alive. There are call-backs to Spider-lore, as well as hints of a wider, funhouse version of the Marvel Universe, like beat cop Ben Grimm.

But really, at the center is the story of a young, modern woman, dealing with young, modern problems, with heapings of modern media and music thrown in. If Gwen (or Barbara) took a trip to Toronto, they just might run into Scott Pilgrim.

And that sounds pretty fun.