REVIEW: Pin Mates Are the Sweetest BATMAN ’66 Collectibles to Date 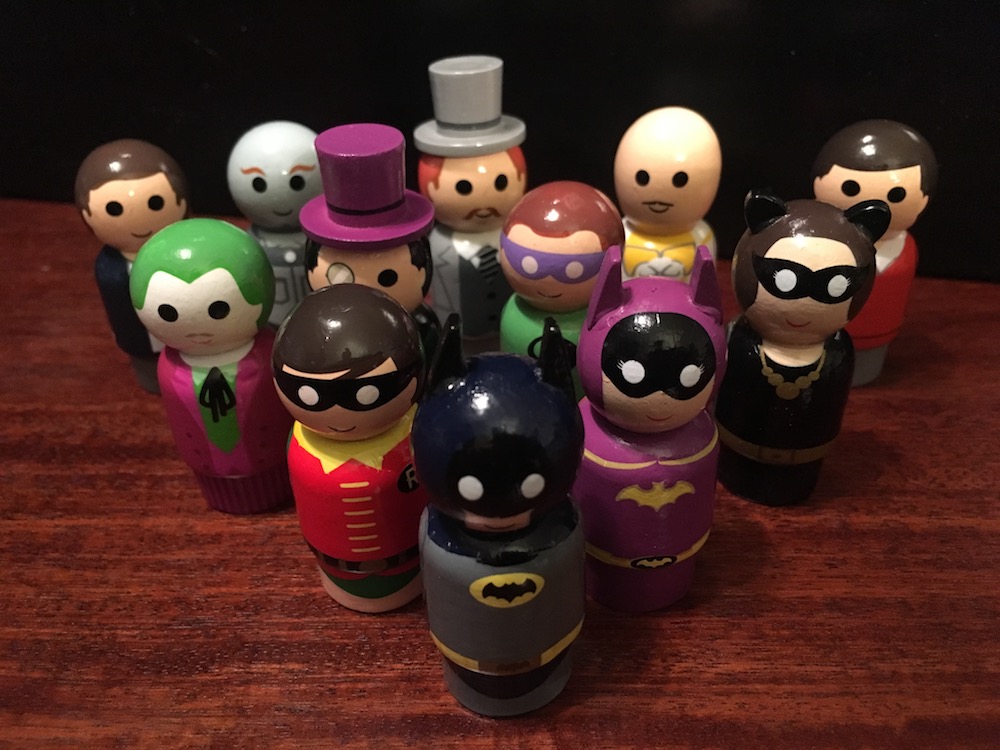 Bif Bang Pow! — the sister company to online retailer Entertainment Earth — has released its latest line of Pin Mates, featuring the cast of Batman ’66, and these guys are a pure delight.

Seriously, how can you not smile when you team up Batman, Robin and Batgirl? 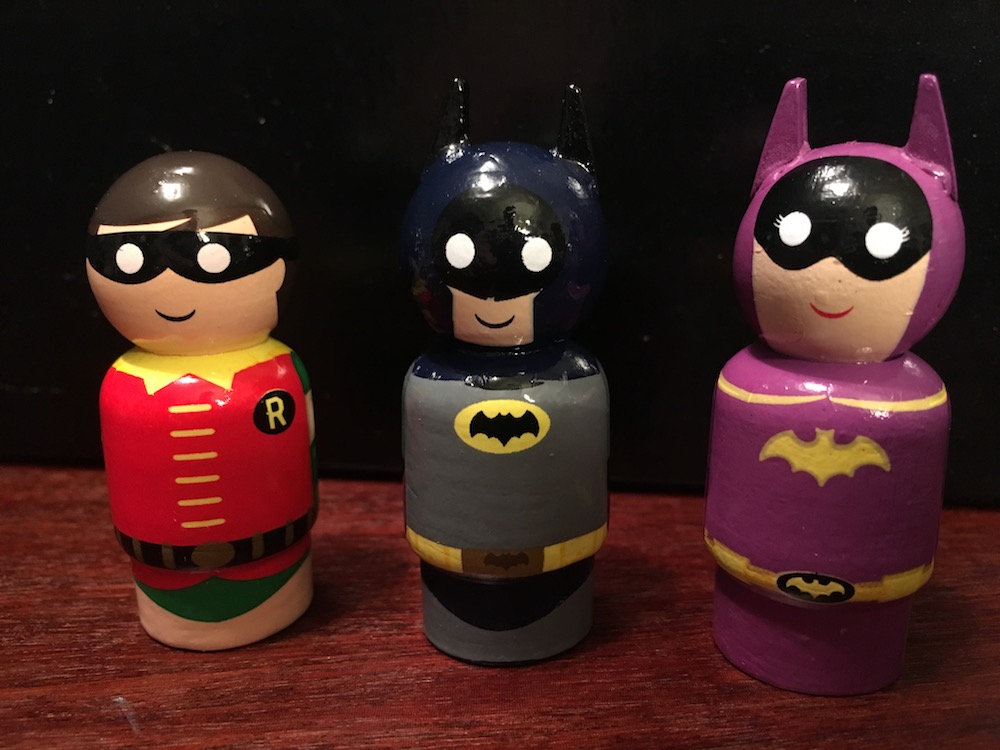 Or the Big Four villains? 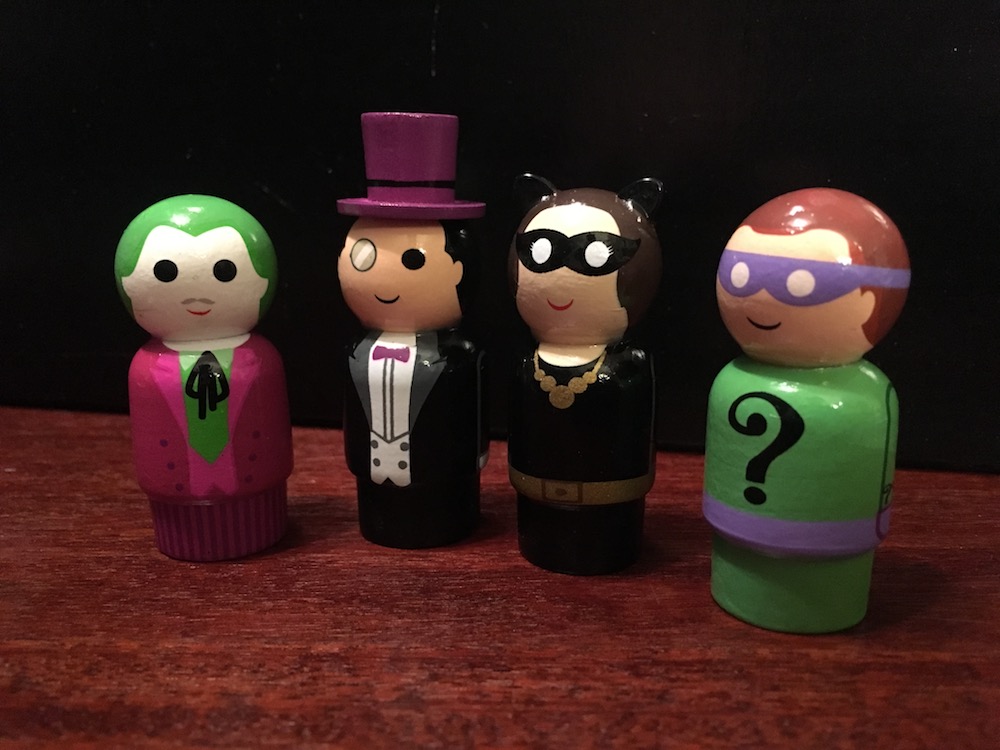 Or have Batman and Robin “change into” Bruce Wayne and Dick Grayson? 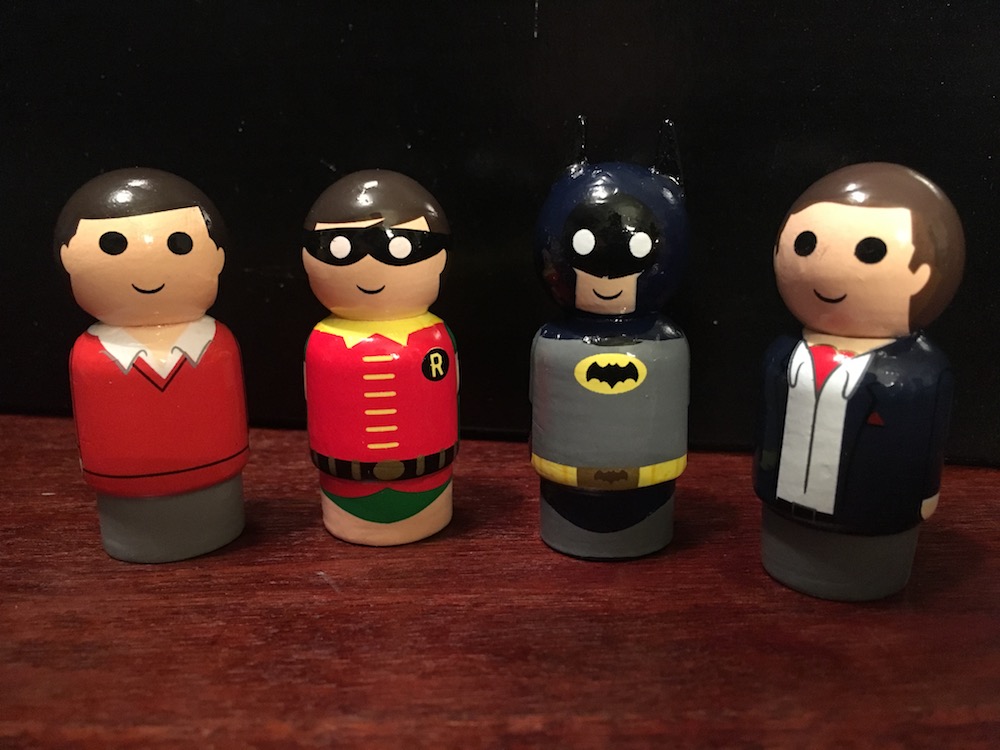 Pin Mates are reminiscent of the little Fisher-Price peg people we played with as young children and I can only imagine how excited I would have been to have these back then.

The Batman ’66 line-up joins Bif Bang Pow’s other series, including DC and Marvel proper and those companies’ modern screen counterparts. (Click here.) There’s a whole classic Star Trek series too (click here) and I have to say that it’s the retro properties that really pop in this format, though maybe that’s the nostalgist in me.

There’s a numbering system that encourages collecting, with Batman ’66 comprising 12 Pin Mates numbered 24 to 35. (They’re part of a larger DC/Warner Brothers series.) The entire set is printed on the back of each resealable package: 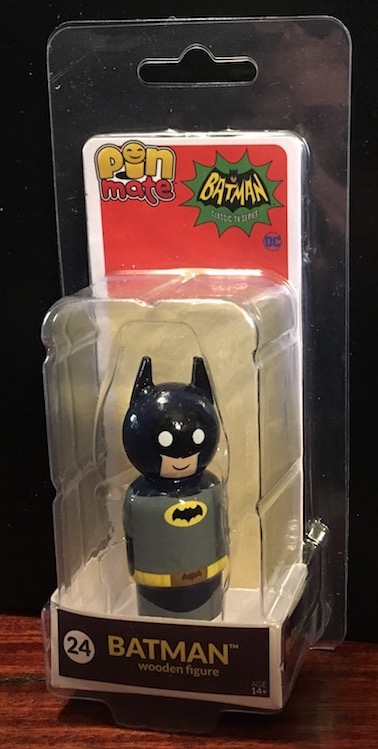 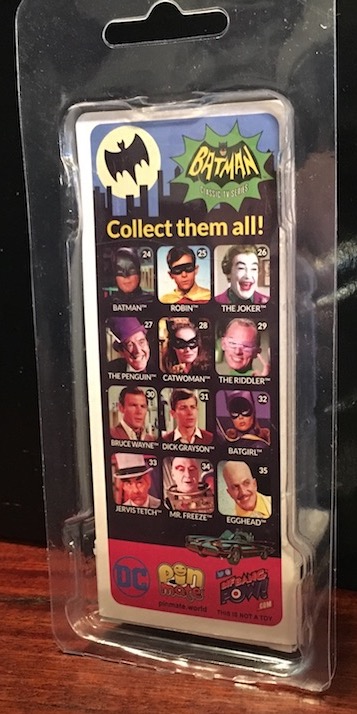 Each wooden figure is hand-painted, is about 2 inches or so, and costs a big, fat five bucks. When you consider how many blind-bagged and -boxed miniature plastic toys are out there, that’s a downright bargain. Quality control is high — the pegs are sturdy and stand easily — and you know exactly what you’re getting. 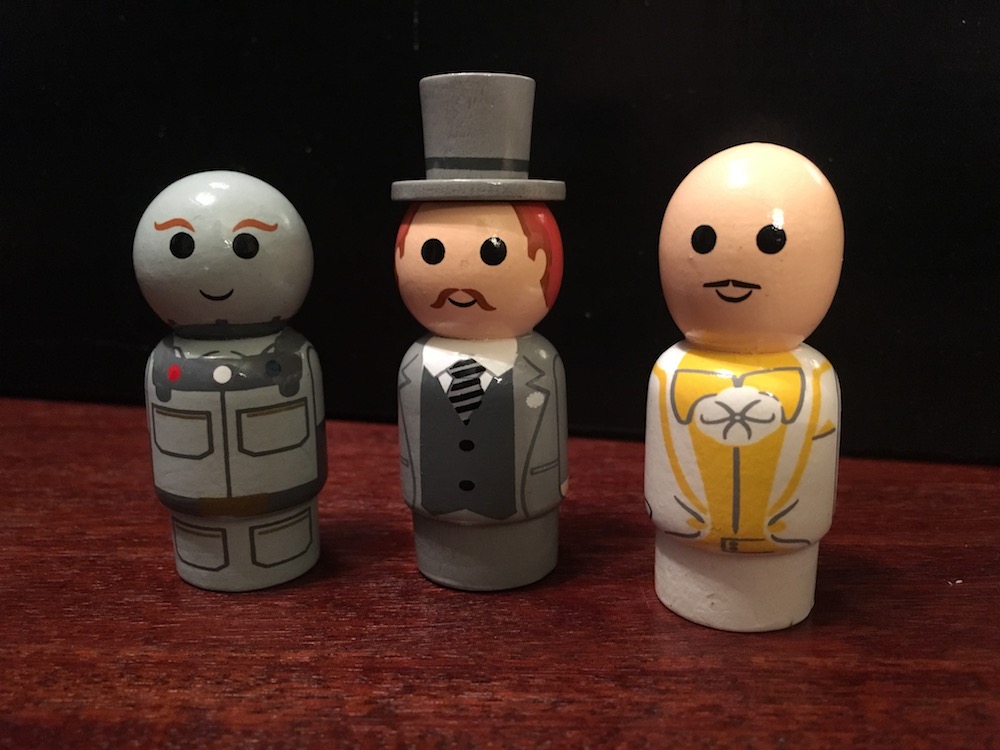 Even though the Pin Mates are intentionally minimalist, they boast just the right details to make them charming, even satirical: Batgirl’s gloves are a different shade of purple than her leotard. Egghead’s bald head is egg-shaped. Mr. Freeze — perhaps the best of them all — has his orange eyebrows, climate-control collar and freeze tanks on the back. Cesar Romero Joker even has his mustache, painted gray to make it appear as if it were covered in white pancake make-up. (If I were to quibble at all, it’s that Batman should have his white eyebrows.) 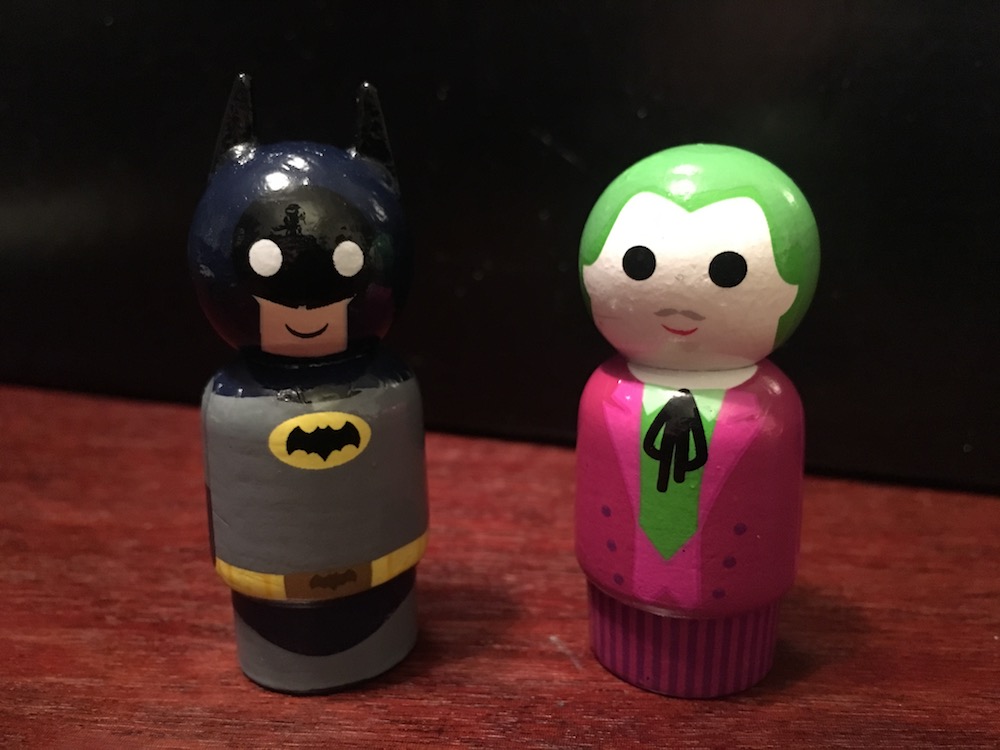 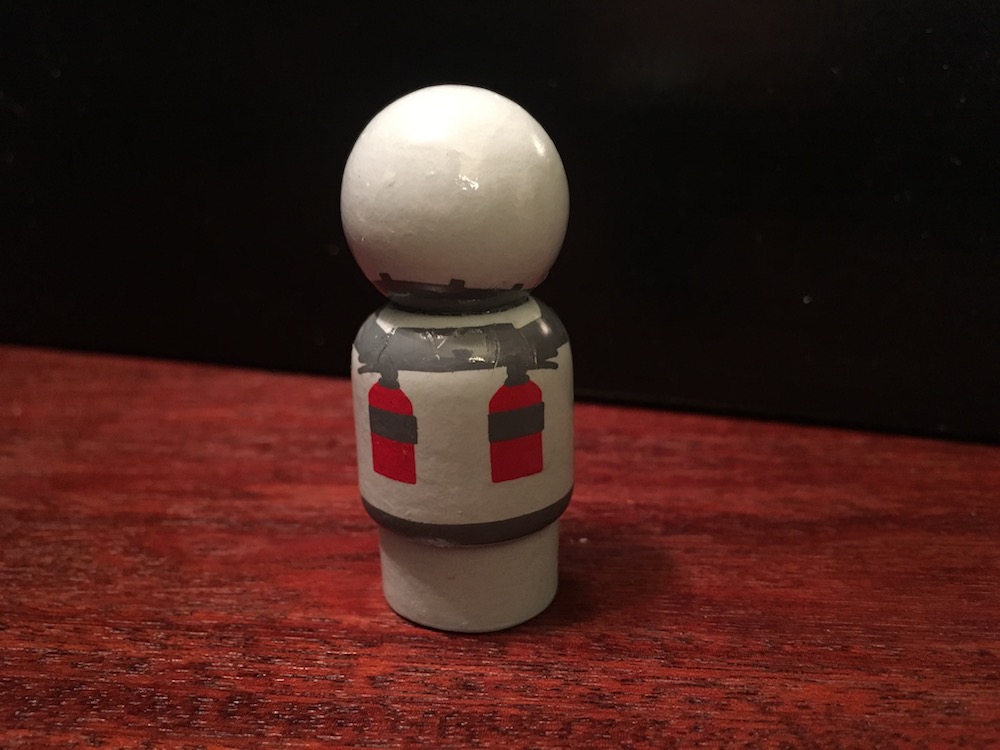 The line has room to grow too. Besides variants — Pink Cowl Batman, anyone? — there are several characters whose actor likenesses are available for use but who are absent here: Alfred, Barbara Gordon, Chief O’Hara, Eartha Kitt Catwoman, King Tut, Bookworm and Shame.

An aside: Since the faces are pretty much identical, I wonder whether Bif Bang Pow! would be able to produce other characters from the show. For example, DC and Warner Brothers use characters like Sandman and Clock King but change certain facial details to get around the license. Hmm.

But the best way to expand the line would be to give us a Batcave like the Star Trek Enterprise set, or at least a wooden Batmobile, which is a natural. I could definitely see an exclusive Alfred included in there somewhere. 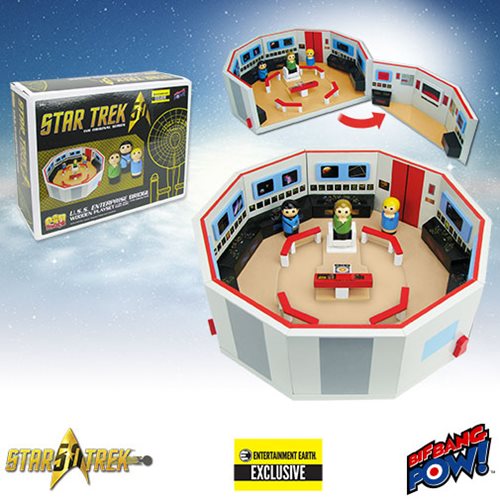 Comes with Kirk and Spock variants and a Nurse Chapel exclusive figure.

Of course, what I’d most like to see is a Wayne Manor/Batcave playset modeled after this: 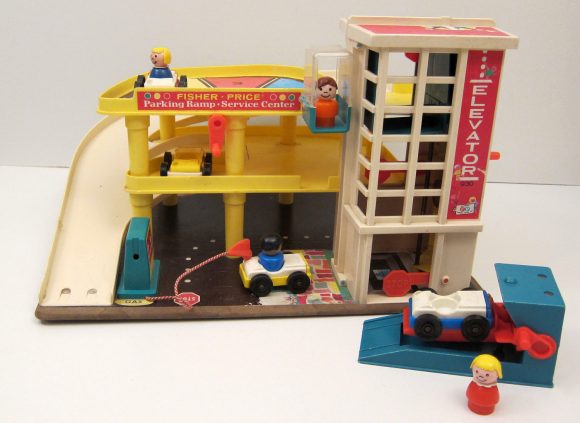 To order the Batman ’66 Pin Mates — or any of the others, click here.