BATBOOK OF THE WEEK: Batman Automobilia #75

Surf’s Up, Joker’s Under — and the Jokermobile hits Gotham Point!

As you may or may not know, we’re counting down the Top 13 BATMAN ’66 EPISODES until the show’s 50th anniversary on 1/12 (click here for the Bat-tastic details).

Today happens to be No. 8. And No. 8 happens to be the Season 3 tour de force Surf’s Up, Joker’s Under — aka The Surfing Episode. (Click here to read all about that beach party.)

The amazing coincidence is that this week, Eaglemoss — that fine British purveyor of Batmobile dioramas and magazines — is releasing Issue #75 of Batman Automobilia stateside, featuring The Jokermobile.

That Jokermobile. That Jokermobile that nobody had any right to expect would ever be produced as a collectible, even after the historic signing of the Great Batman ’66 Merchandise Treaty of 2012. 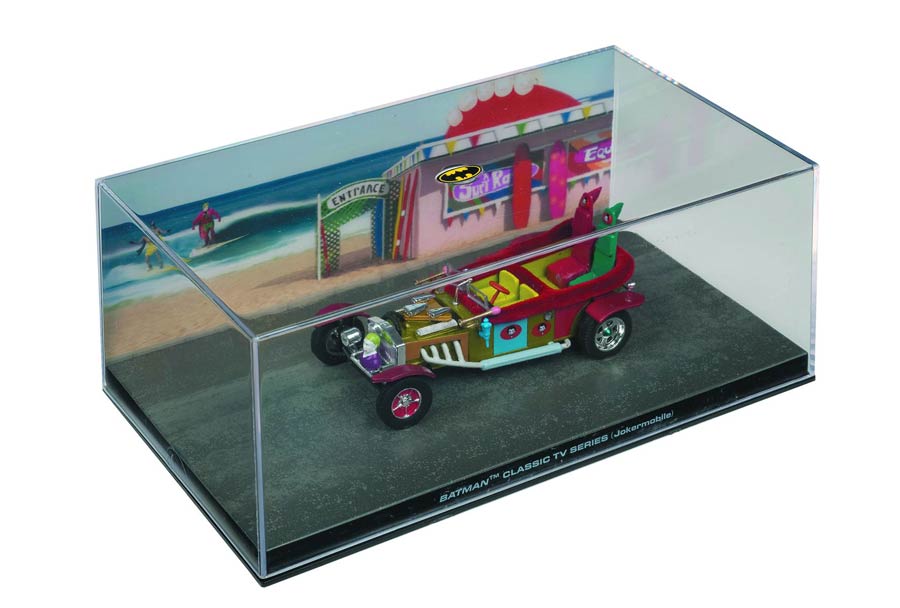 Really. If you ever thought you’d see this on your shelf, you’re kidding yourself. Or joking, if you prefer.

I am a big fan of Eaglemoss’ Batmobile line (and you’ll be reading quite a bit more about that as time goes on here). I not only already have the first five Batman ’66 items they’ve released — the Batmobile, Batboat, Batcopter, Batcycle and Batgirl Cycle — but I have a bunch of their other vehicles, such as the Bronze Age Robin Cycle and the Filmation Batmobile (click here).

Each vehicle comes enclosed in a clear, plastic case, with a 3D background. Sometimes there are other props inside the case. Either way, you not only get the vehicle, you get a scene, whether from comics, TV, movies or even video games. For example, in Issue #75, you not only get the Jokermobile at the beach, you get Batman and the Joker in the surf!

And the accompanying magazine includes a fold-out of the vehicle’s schematics. All for about $21. Cowabunga!

Anyway, even if I weren’t doing this countdown, this would be the BATBOOK (BATSWAG?) OF THE WEEK. And even if this weren’t coming out, Surf’s Up, Joker’s Under would be No. 8 on the daily countdown. With a coincidence this monumental, all I can say is:

ALSO ON THE BATSHELVES THIS WEEK: Batman and Robin Eternal #14 and Detective Comics #48 are both due out. Pick ’em up.