Scott and Dan — along with special guest Fred Van Lente — hit up the comics racks from 35 years ago!

This week for RETRO HOT PICKS, Scott Tipton and I are once again joined by Fred Van Lente, whose Comic Book Story of Basketball is out this week (click here). We’re selecting comics that came out the week of Sept. 23, 1985.

(Keep in mind that comics came out on multiple days back then — as has become the case now. So these are technically the comics that went on sale between Sept. 20 and Sept. 26.) 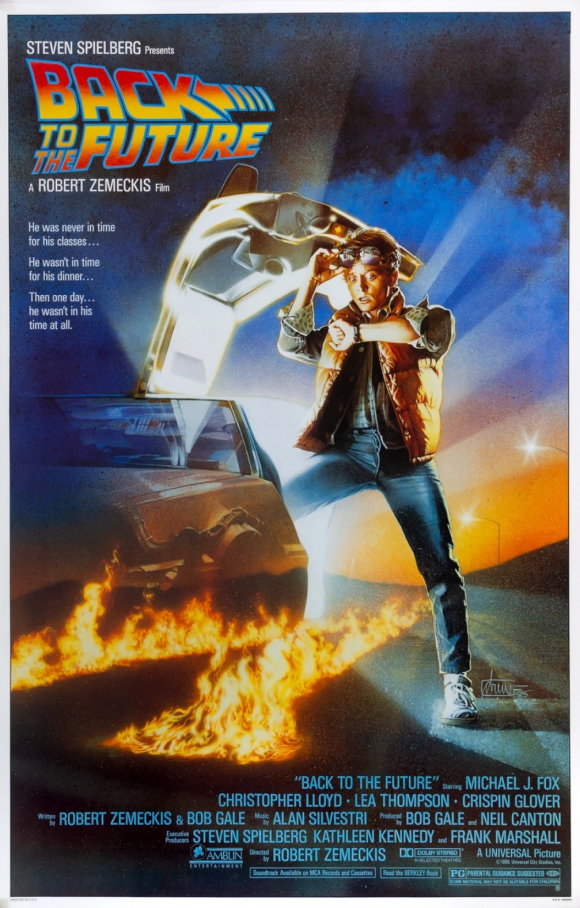 So, let’s set the stage: Ronald Reagan was in his second presidential term. Back to the Future was hitting the end of an eight-week run as the #1 box-office hit in America. The Cosby Show was in the midst of an extraordinary domination of the Nielsen ratings. Dire Straits’ ubiquitous Money for Nothing — with its groundbreaking video — topped the singles chart and their album Brothers in Arms ruled the Billboard 200.

I was 13 in 1985, prime spinner-rack buying age. I did actually buy a lot of these when they came out, so I know what not to pick (shudder). With the benefit of hindsight, I think I’d go with: 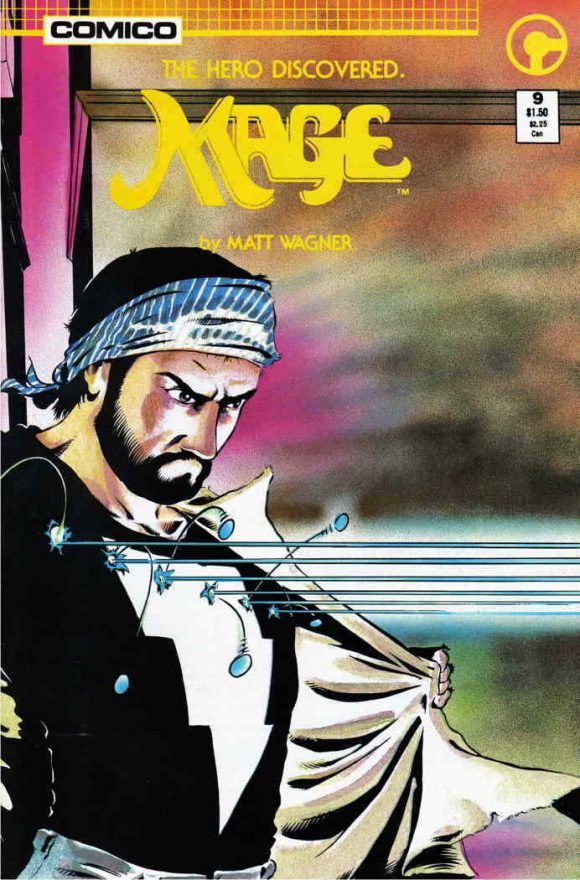 Squadron Supreme #5, Marvel. While the whole Justice League-takes-over-world storyline that makes up this miniseries is pretty great (and is, despite what you may have heard, completely distinct from its contemporary, Watchmen) this is where the plot starts getting really good, where the Institute of Evil (love that name) becomes unlikely freedom-fighters and tries to take the Squadron down. 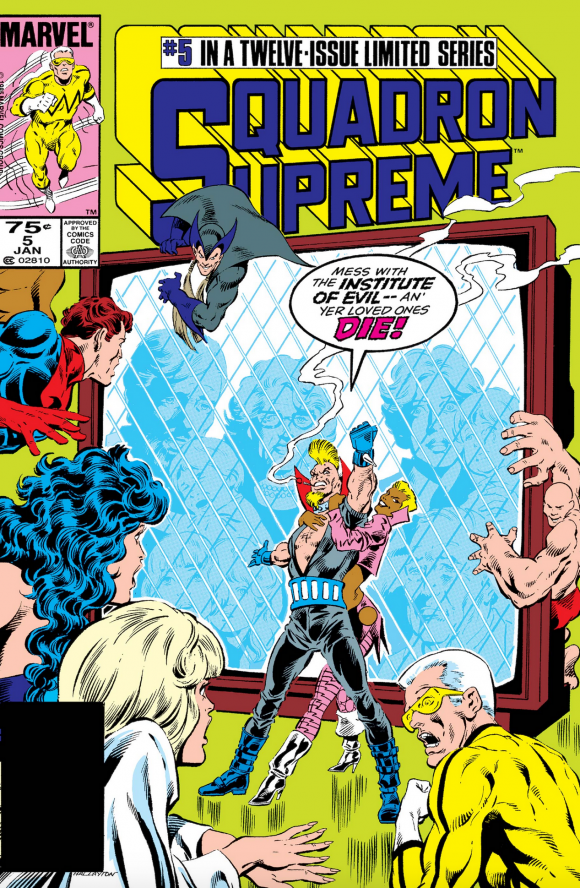 Jon Sable, Freelance #32, First Comics. I really got into Mike Grell’s stuff when he did Green Arrow, but I’ve never read Sable, and whenever Mike tackles Vietnam it’s an interesting comics story. Like Peggy Sue Got Married, I will re-do my own poor comics buying choices via time travel and check this out. 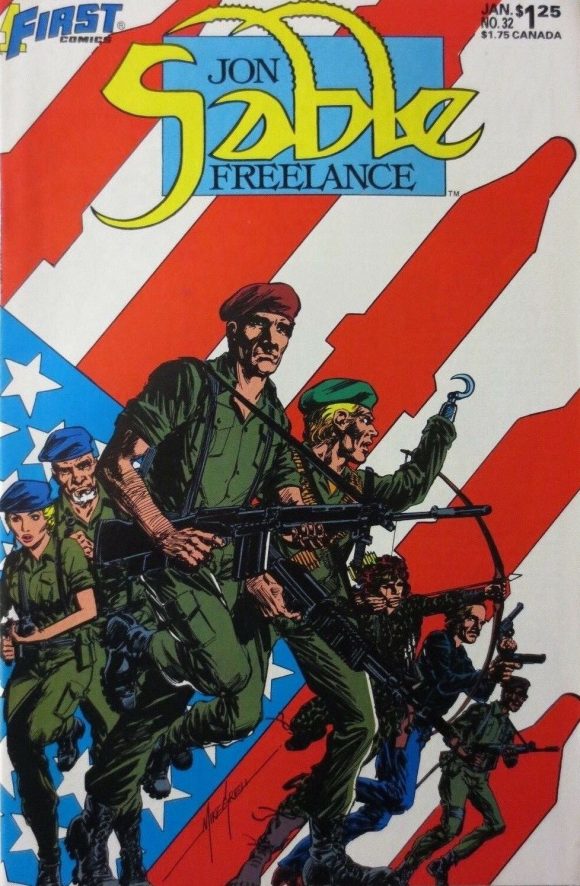 DC Science Fiction Graphic Novel #1: Hell on Earth, DC. Another do-over. I remember seeing all the DC house ads for these books, but never checked them out. Are they any good? Are they dumb? It’s Robert “Psycho” Bloch, so how bad can it be? I just saw The House That Dripped Blood over on Shudder, starring Peter Cushing and what’s his name, the first Dr. Who, and it was actually pretty good! Bloch wrote that movie too, so maybe DC Science Fiction Graphic Novel #1 is good too, is what I’m saying. 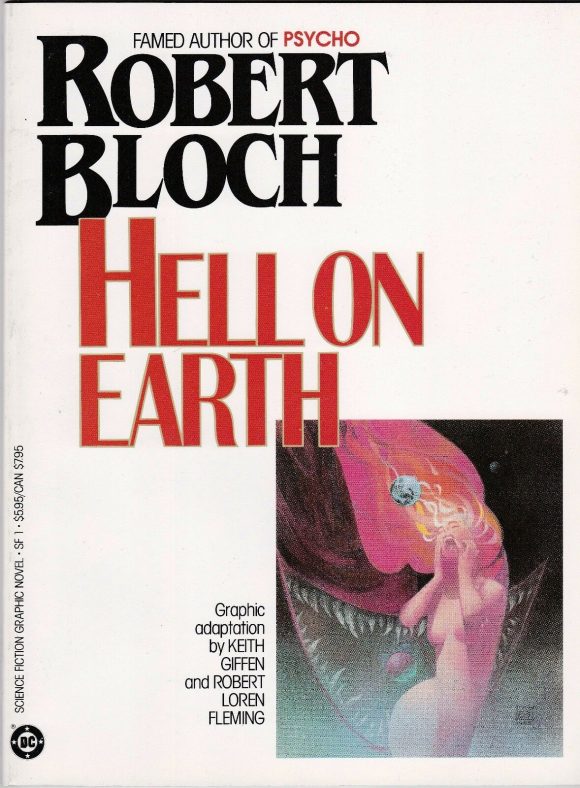 The West Coast Avengers #4, Marvel. I remember loving these early days of the West Coast Avengers, particularly the running subplot of Hawkeye desperately trying to woo Ben Grimm into joining his new team of California Avengers. I was so bummed when it ultimately never happened. 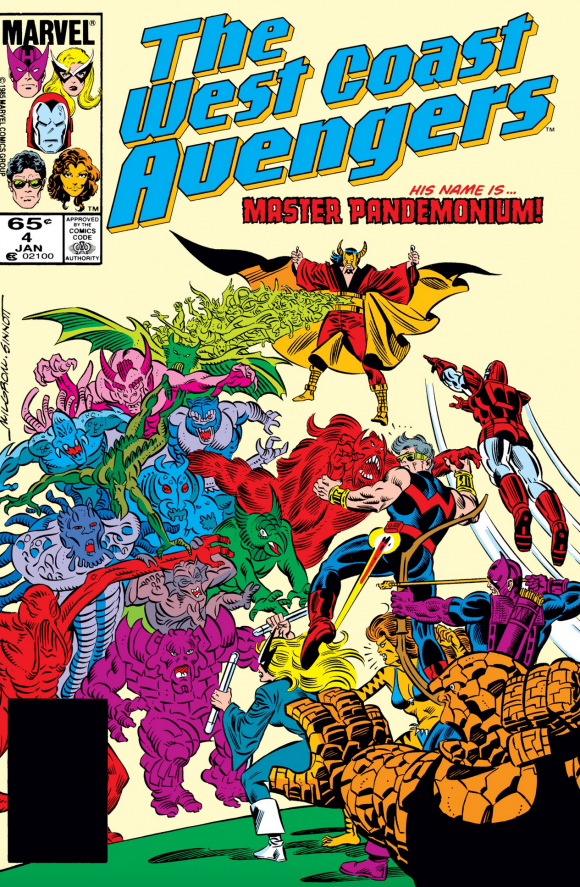 The Official Handbook of the Marvel Universe, Deluxe Edition #2, Marvel. I absolutely devoured these as a kid, absorbing every entry, learning as much as I could about every character. The amount of work that went into these must have been exhausting. I can’t imagine how Mark Gruenwald was writing this while still editing three or four monthly comics. 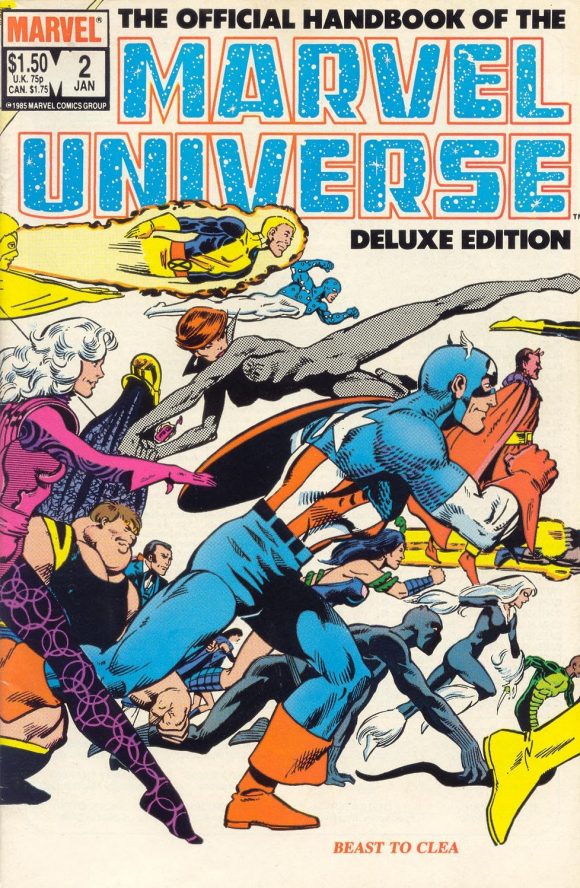 The New Mutants #35, Marvel. Two things on this issue: I couldn’t help but be a little disappointed by Mary Wilshire interiors after Bill Sienkiewicz’s legendary run (though Bill on inks helped cushion the blow), but the shock of Xavier handing over the school to Magneto was very real at the time, and the story here by Chris Claremont was the first step toward accepting Magnus as the new headmaster. 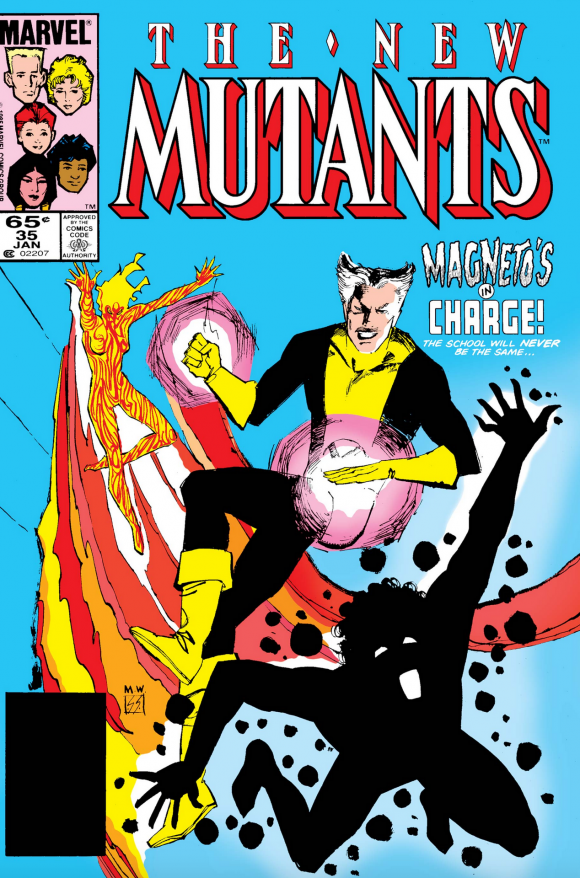 Detective Comics #557, DC. I’ve read every Batman and Detective from 1964 to the early ’90s, plus a ton before and after, and I have to tell you: I remember so little from this period, which included the A-List team of Doug Moench and Gene Colan. It’s a blur. Two things though: A) I’m in the middle of an epic Batman/Detective re-read and plan to hit these issues all over again. B) I liked the original Jason Todd. In fact, I liked his red hair and original outfit! Shoulda kept both. 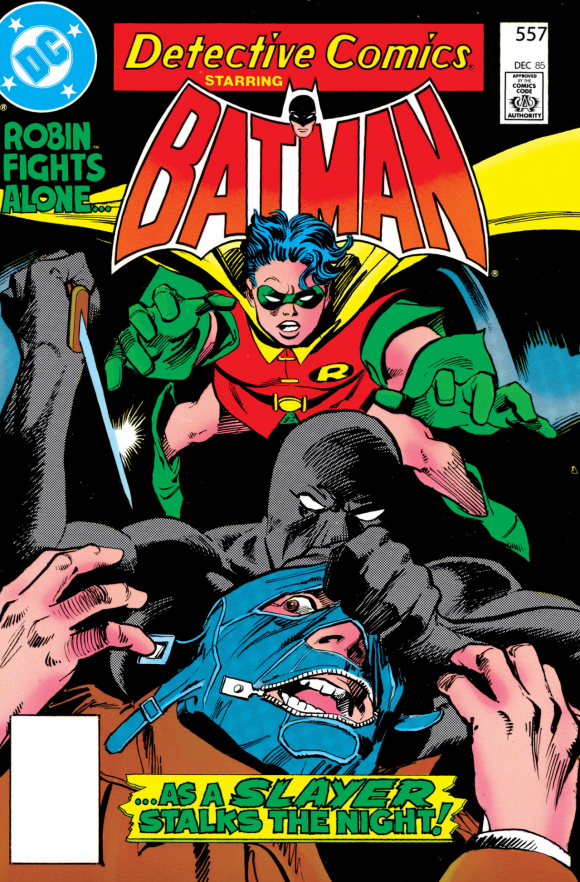 Scott adds: I was a big fan of the new Robin Jason Todd when he was first introduced. There had never been a “kid” Robin in new Batman stories as long as I’d been reading comics, so it all felt very fresh and exciting, and the original conception of Jason Todd was a very likable character. It wasn’t until he was “revised” after Crisis on Infinite Earths as a surly punk that readers turned on him.

All-Star Squadron #52, DC. DC was deep into Crisis on Infinite Earths and every other book was a red-skied tie-in. Not to be a downer, but issues like this were among the last of the glory days of Earth-Two and Earth-S. When Crisis ended, I was happy about the whole streamlined, one-Earth thing, but I’ve long since come around 180 on that idea. DC’s original Multiverse was brilliant and should have been allowed to stand. 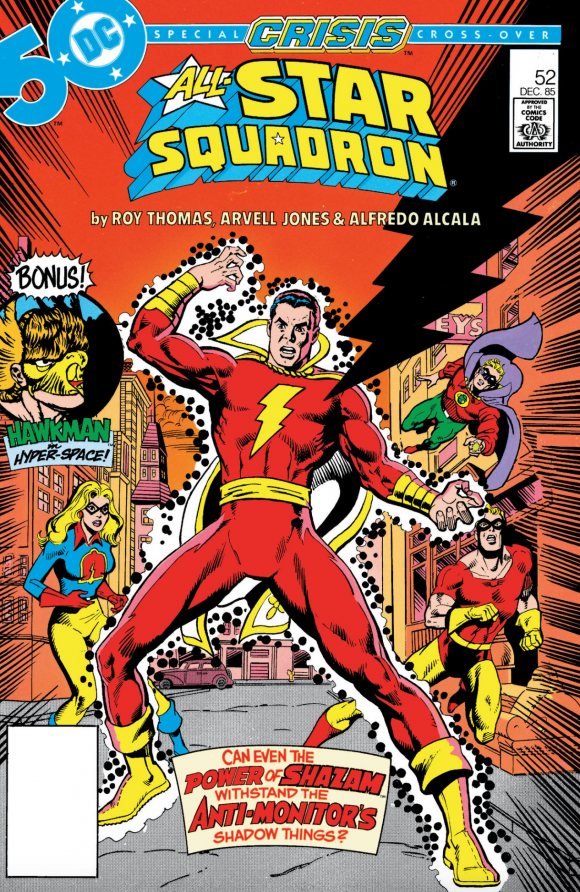 DC Challenge! #2, DC. For some reason, I bought into the idea that this event — which featured a different creative team each issue, picking up where the previous team left off — was going to be as big a deal as Crisis. Uh, no. I did buy the first few issues, but, um, well, the less said the better. (On the other hand, DC’s Kamandi Challenge from a few years ago rocked.) 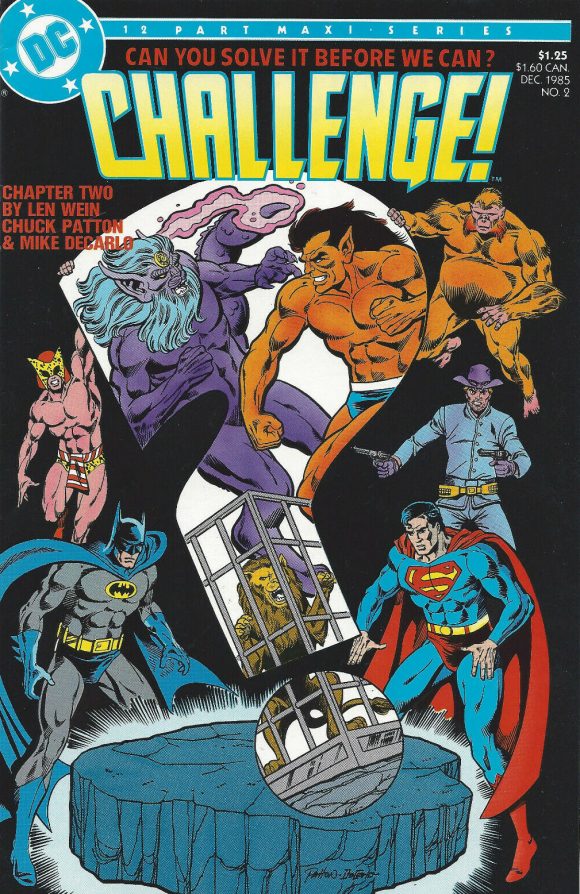