Scott and Dan — along with special guest Mark Waid — hit up the comics racks from 46 years ago!

This week for RETRO HOT PICKS, Scott Tipton and I are joined by superstar writer and Humanoids U.S. publisher Mark Waid in selecting comics that came out the week of Sept. 16, 1974 — a week picked by Mark himself.

(Keep in mind that comics came out on multiple days back then — as has become the case now. So these are technically the comics that went on sale between Sept. 13 and Sept. 19.) 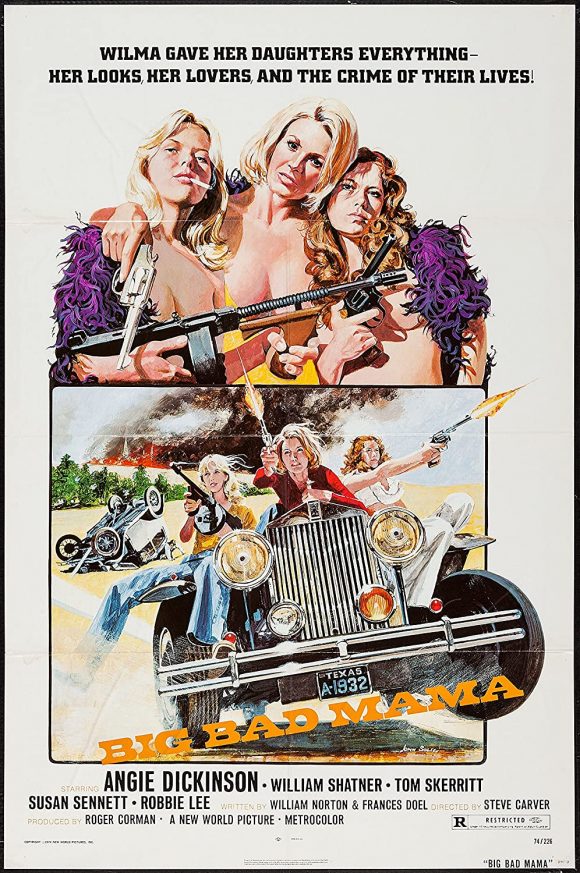 Let’s set the scene, then: Gerald Ford had assumed the presidency from the disgraced Richard Nixon. It was a pretty sparse week in theaters, though Roger Corman’s cult-fave Big Bad Mama — starring Angie Dickinson, William Shatner and Tom Skerritt was released. Chico and the Man premiered on NBC — and was the #1 show in the Nielsens. Barry White’s epically awesome Can’t Get Enough of Your Love, Babe topped the Billboard 100 and Stevie Wonder’s classic Fulfillingness’ First Finale was the best-selling album.

The Avengers #130, Marvel. Writer Steve Englehart, who’d been on The Avengers for over two years, had already hit it out of the park with his 1973 summer-long blockbuster Avengers/Defenders War crossing back and forth between both titles. The next year’s worth of issues were very good as well, but it turns out Steve was saving his fastball for his epic Celestial Madonna arc, still my favorite Marvel story of all time, for which this issue set the stage. I’m a sucker for stories where the hero fights someone else’s villain, so I was delighted to see half of Iron Man’s rogues gallery face off against Earth’s Mightiest Heroes. 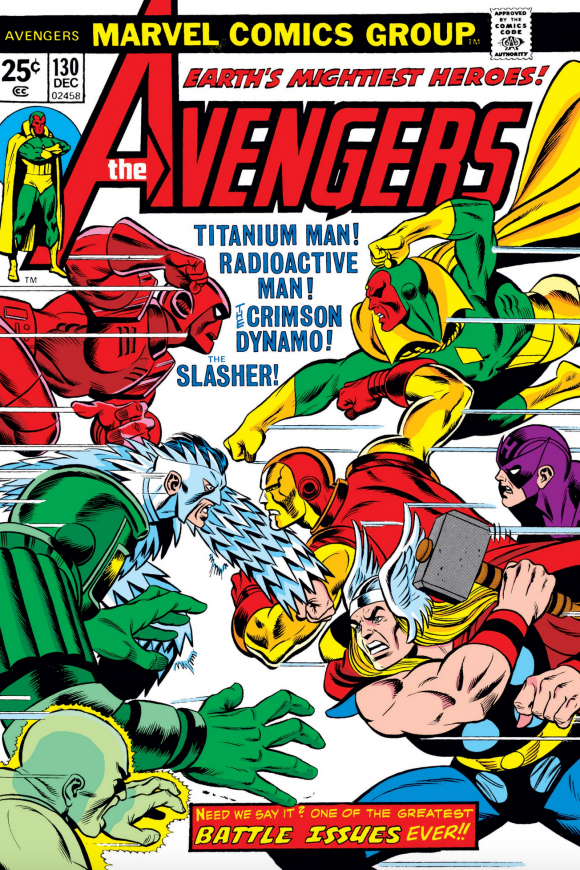 The Brave and the Bold #116, DC. At 12, I was deep into my “Bob Haney Sucks Because He Ignores Continuity” phase. (I outgrew it.) I was also not a big fan of Jim Aparo. (I was an idiot.) So B&B was never one of my favorite books — until, like not enough of the rest of the DC line, it fattened up into a 60-cent 100-pager in 1974, full of choice reprints. I wouldn’t remember any details of the Batman/Spectre story if you waterboarded me, but The Dimensional Caper remains one of the very best Titans stories of all time, worth the price of admission. Artist Nick Cardy was at the peak of his game. 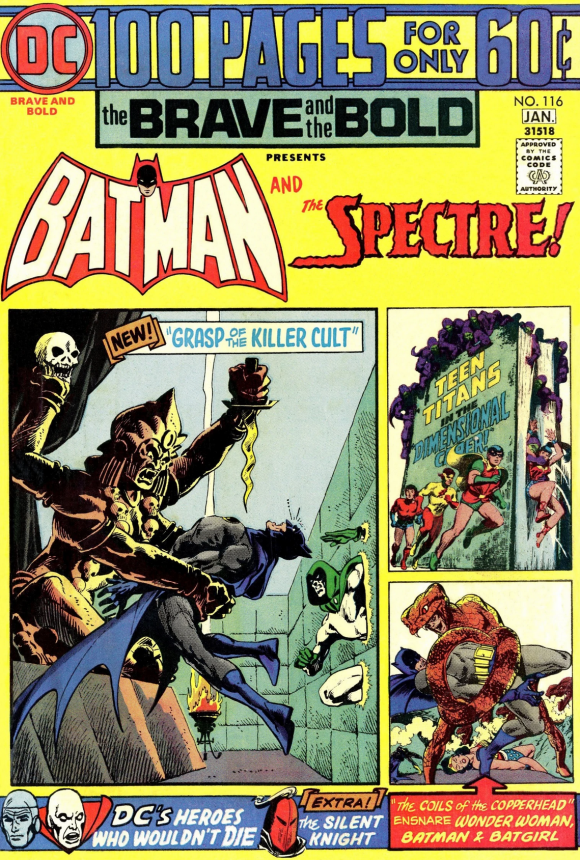 Dan adds: I second everything Mark said, except I didn’t dislike Bob Haney as much as I didn’t like the idea of Batman sharing screen time with another hero. I plan an epic B&B re-read in the future.

Marvel Treasury Edition #2, Marvel. Distribution of any comics other than standard 32-pagers was wretched in my neck of the woods, so every time I could score a treasury edition, I was giddy. (Well, except for Superman Salutes the Bicentennial, but that’s a whole other story about a 45-year-old grudge. Justified). I still didn’t know much about the Fantastic Four, but even I had heard of the Galactus Trilogy, the legendary saga that introduced the World-Eater and his herald, the Silver Surfer. It was a thrill to read, especially in that large format. Something everyone forgets about that story, by the way: Not only was it an instant classic, but Jack and Stan told it not in three 20-page issues, but in only 40 pages — the first half of FF #48 and the last half of FF #50 have absolutely nothing to do with the Galactus tale! Also in this issue: a reprint of Captives of the Deadly Duo from FF #6, which many historians (including myself) believe to be the only issue of Fantastic Four not only drawn by Kirby but written by him as well. 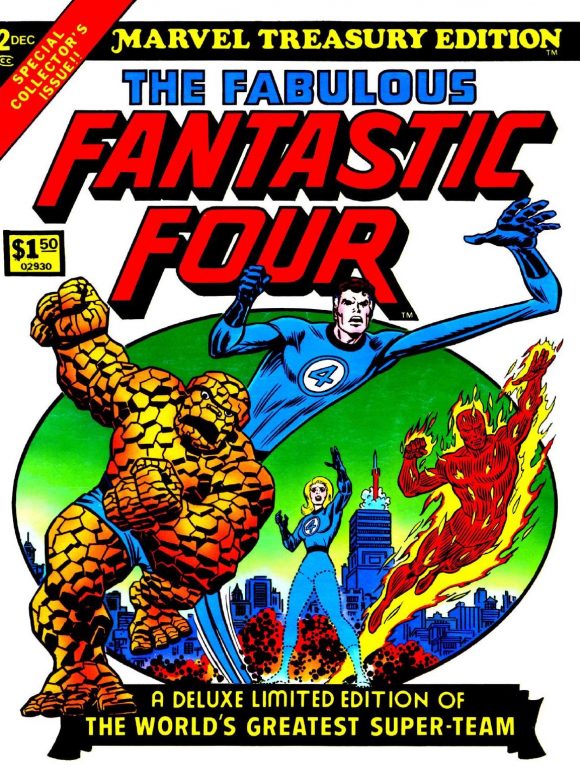 Arrgh! #1, Marvel. Once upon a time, Marvel published comics about something other than superheroes! It’s true! I swear! In fact, in the early 1970s, horror proved a rich genre for the House of Ideas — books like Tomb of Dracula, Werewolf by Night and Monster of Frankenstein were popular. What didn’t sell for Marvel were horror anthologies for some reason (DC was making bank on them at the time). Having gambled and lost on books like Chamber of Darkness and Tower of Shadows, the publisher tried combining humor with monsters to create the short-lived Arrgh! The lead story, a Dracula send-up, was all new; the middle tale was a reprint from the 1950s; but the gem of the issue was Rat!, drawn by Tom Sutton, about a lowlife crook who accidentally becomes a giant rat and terrorizes his victims until the effect wears off, at which point — ah, why spoil it. Bizarrely enough, the story looked new but wasn’t — it was reprinted from a fan magazine called The Monster Times, of all places. 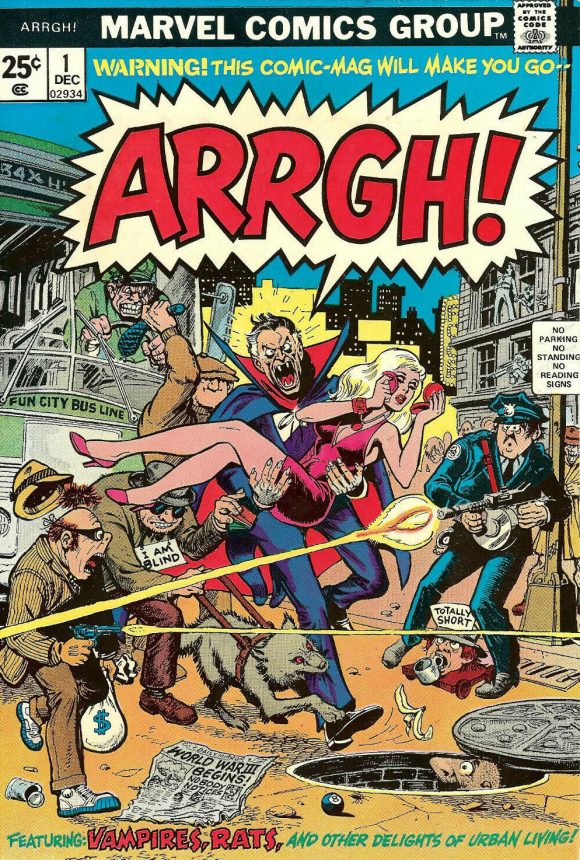 Superman #282, DC. Elliot S! Maggin remains, hands down, my favorite Superman writer of all time. His take on the Superman/Luthor relationship mirrors mine — that they were boyhood friends until Superboy screwed up. Seeing Luthor’s lab on fire, he blew out the flames without even checking to see what was really going on inside — and, in doing so, destroyed Lex’s once-in-a-lifetime, history-making creation of life in a test tube.

Yeah, it also cost Lex his hair — that much was established long before Elliot — but Maggin (and I) handwave that away as an afterthought and plant our feet in the sand on the belief that it was the careless destruction of an emotionally fragile kid’s experiment, one that would have proved to the world his genius, that drove Lex over the edge of sanity. Superboy’s moment of carelessness was the single greatest mistake he ever made, and as Elliot (and I) see it, he carries around with him the guilt that he not only lost his best friend but cost the world a benevolent genius.

Oh, the story? The story’s noteworthy because it’s here that Luthor debuts his green-and-purple super-suit that he’d wear for many years (and in many Super Friends cartoons!) to come. Added bonus: This was first time, I believe, that penciller Curt Swan was inked by Kurt Schaffenberger, a great combo and a very welcome trade-up from regulars Tex Blaisdell or Frank Chiaramonte, neither of whom was really suited to do well by Curt. 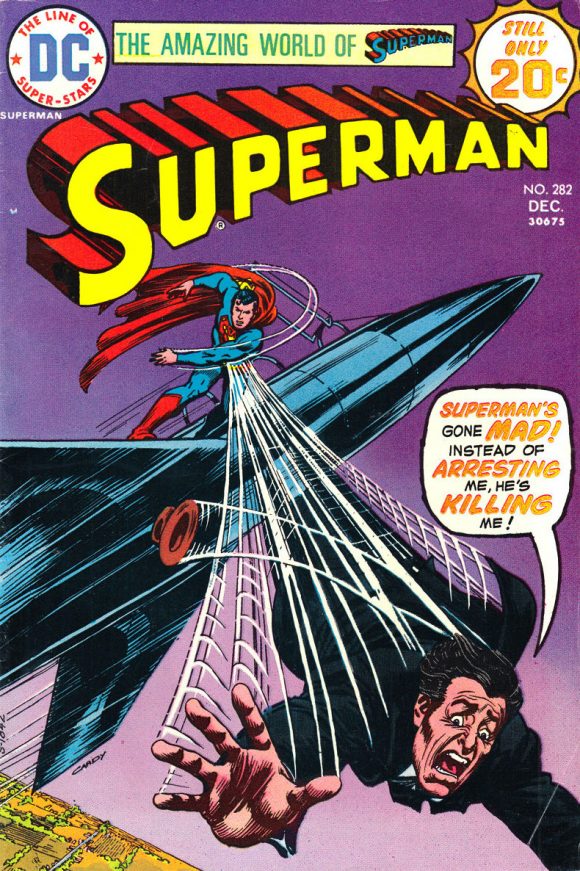 Scott adds: Why do I feel like Zack Snyder read this comic as a kid but kinda missed the point?

Golden Comics Digest #40, Gold Key. I had a whole bunch of these Gold Key digests as a kid, and I loved them. Packed with stories but small enough to fit in a kid’s back pocket – what a great format. 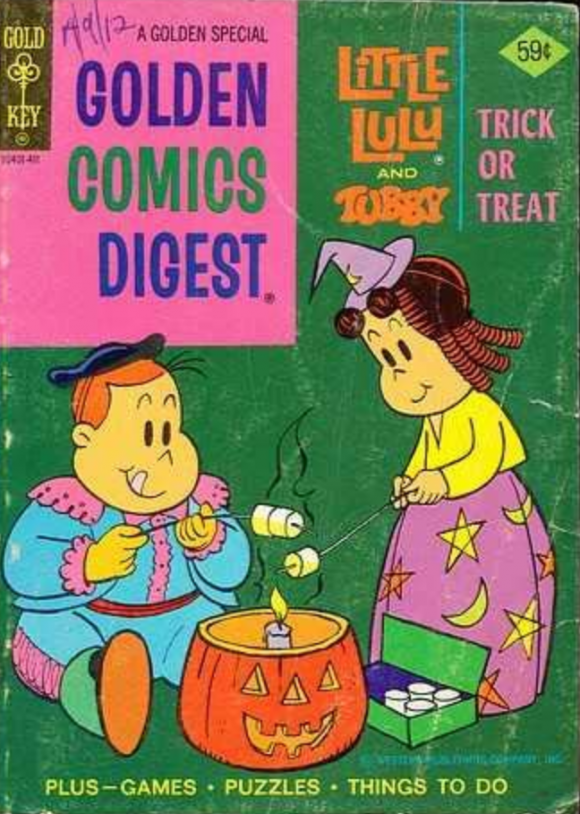 The Defenders #18, Marvel. I’m a big Sal Buscema fan, so combine his interior art with this Gil Kane/Dave Cockrum rendition of the Wrecking Crew on the cover, and there was no way I wouldn’t have bought this. 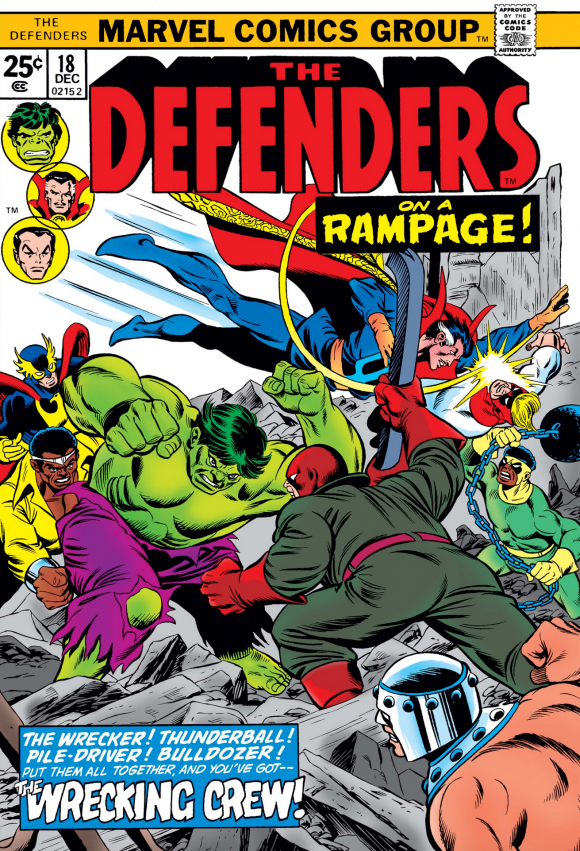 Star Trek #27, Gold Key. I loved this issue! I remember creepy red turtle men and a super attractive science officer on an ice planet with Kirk and Spock. Artist Alberto Giolitti’s amazing work on this series is so often overlooked. 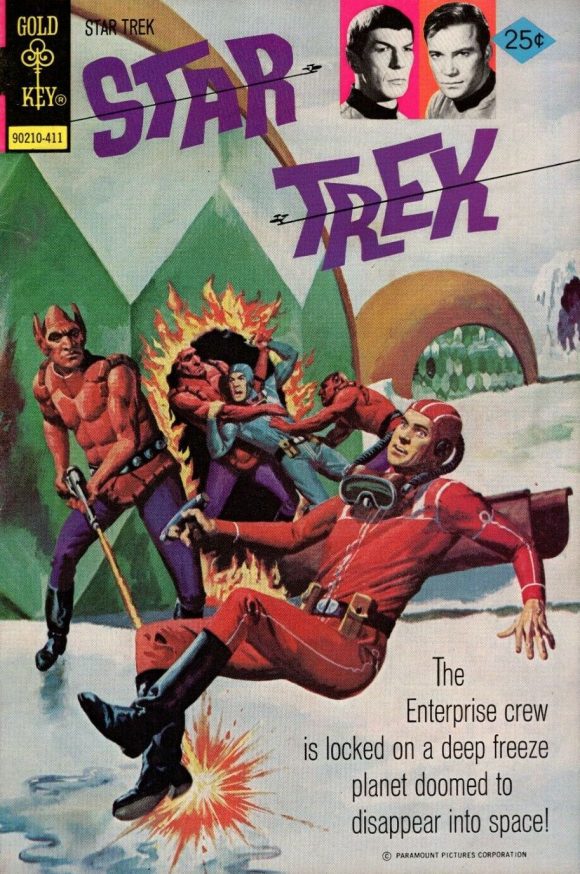 Dan adds: I wasn’t into Trek when I was 7 (it would be about another 12 years) but in retrospect, Gold Key’s comics were wonderfully offbeat and often off-model. That makes them more endearing, not less so.

The Lone Ranger #19, Gold Key. I went through a Lone Ranger phase when I was a kid: I had the 12-inch Gabriel Lone Ranger and Tonto and listened to the old radio show, which used to play on a really fuzzy station on Sunday mornings. So I would have in all likelihood grabbed this one had I seen it on the rack, and it would not have made one difference that it was all reprints. Dig the nifty cover by Don Spaulding. 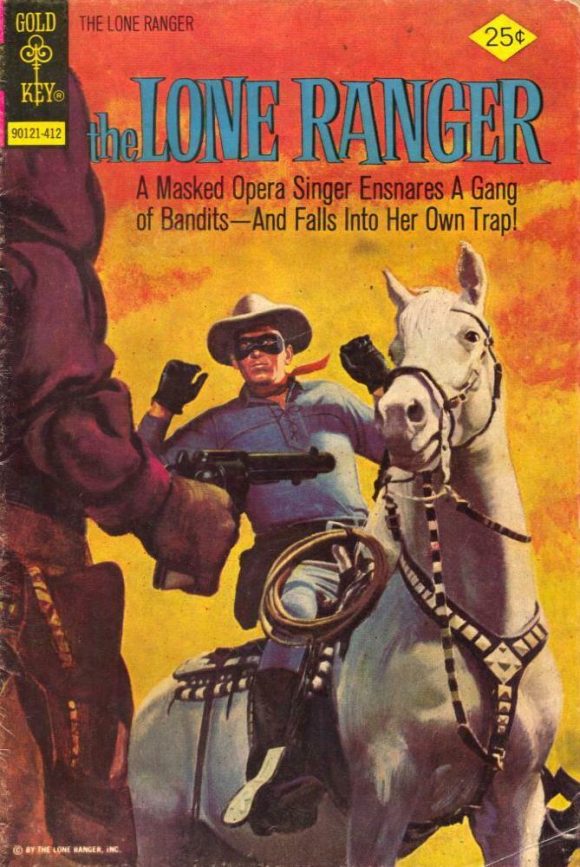